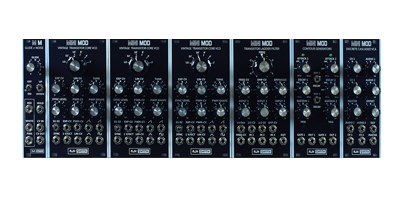 A faithful recreation of the Minimoog Model D, in Eurorack form. Dave Gale patches up the AJH Synth Mini Mod system and reports back his findings… 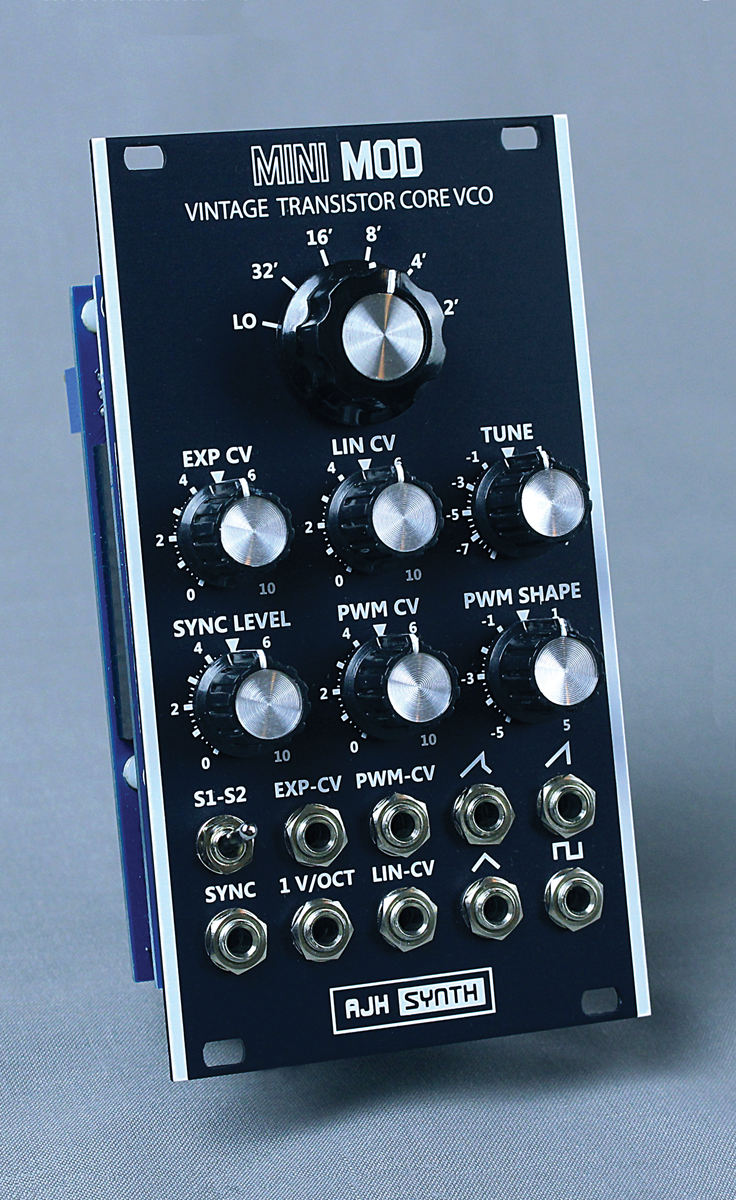 Prior to developing the Mini Mod, Allan J Hall worked as a service engineer, repairing and modifying numerous analogue keyboards, including Moogs. Combining this knowledge with his experience in product design, he began an 18-month journey to develop a Eurorack system that would recreate the Minimoog Model D. Now, his initials adorn the front panelling of this set of modules.

The design of these modules harks back to the Mk 1 Model D, which is thought by many to be the most desirable of the Minimoogs. However, placing a Model D in Eurorack form is not without its challenges, not only in technical requirements but also in form factor, which is why you will find a module for each component of the original synth.

The review system consists of three VCOs, one VCF, Dual Envelopes and VCAs, and a Glide/Noise module – so seven modules to make up the required Minimoog architecture.

The Grand Opening
The Mini Mod is available in two flavours; Vintage Black, which is very Moog-like, and Classic Silver, more in keeping with many Eurorack modules

The first point that strikes you, as you start to patch the Mini Mod together, is the architecture at the front end. The Minimoog had three oscillators, all of which would need to feed the next stage – the filter (VCF), so cleverly AJH has fitted an input mixer to the front end of the VCF, meaning the Mini Mod can be considered a self-contained combo, without the need for a mixer.

At this point, the temptation to select a Saw Tooth output from each oscillator was too great – and slowly increasing the amplitude of each wave form, with the subtlety of detuning, took me back to my first encounter with a Model D. The closeness of the timbral make-up to the original is uncanny. The discrete transistor core of the oscillator is at the heart of the VCO, and the depth of overtones is lush. Times this by three and you have something very special.

As well as the usual Saw, Square and Triangle wave outputs, the classic ‘Shark Tooth’ is also available, plus the usual modulation input options, such as PWM. There is a Sync option, too, along with a sync level control, under CV control. One slight issue is the user would need to feed each oscillator a pitch CV independently, meaning a four-way patch bay or some stackable cables would be needed.

In my experience, there are very few Eurorack oscillators that plump for a switchable range potentiometer but, in keeping with its heritage, the Mini Mod VCO is switchable, with the option to extend down to LFO range – although this might be considered one of the few drawbacks inherent from past years. The lack of dedicated LFO on the Model D was always an issue, but one that can easily be put right with the addition of another Eurorack module. The AJH VCOs sound outstanding on their own, but when stacked three times, some real magic happens.

This begs the question, would you want more than one? Frankly, who wouldn’t want three VCOs, to be completest in the quest for the Minimoog architecture; but in true Eurorack tradition, I also employed a single VCO against other oscillators in my Eurorack. The performance was outstanding, offering stability with a very short warm-up period of around 20 minutes, and held tuning exceptionally well, with solid calibration.

Tune in, Filter Out
We have already mentioned the integrated three-input mixer on the filter module, allowing the user to blend the oscillators seamlessly and, apart from this, the rest of the filter is exactly what one might expect; a Classic Moog Transistor Ladder filter, at 24db/octave. This is the stuff of legends, and is as clean and elegant in sweep as it is brutal when resonated.

One of my issues with the Moog ladder has always been the lack of bottom end, when the Emphasis (or Resonance) pot is cranked. One old trick that helped to alleviate this issue with the Model D, was to feed the headphone output back in to the audio input to create an overdrive loop. This can’t be done with the Mini Mod, but AJH has included a jumper on the back of the filter circuit board which, when removed, will deliver a further 70% in VCF output level, mimicking the original Heath Robinson technique.

It’s a shame this isn’t switchable from the font panel, although I imagine many synth heads will remove the jumper permanently. Certainly, the VCF becomes even more of an animal in this overdriven state, so much so that I would remove the jumper as a permanent fixture, as the resonance whistles to a state of distortion, introducing more colour.

Cut-off frequency and resonance are also available to CV control, allowing options for modulation, and there are also three fixed levels of key following, to allow the filter to follow the keyboard.

The care and attention that has been taken to make this filter sound like the original is clear. The starting point has been to use the same design, but there’s an overwhelming sense that no stone has been left unturned with the oscillator and filter, which is key to this success. 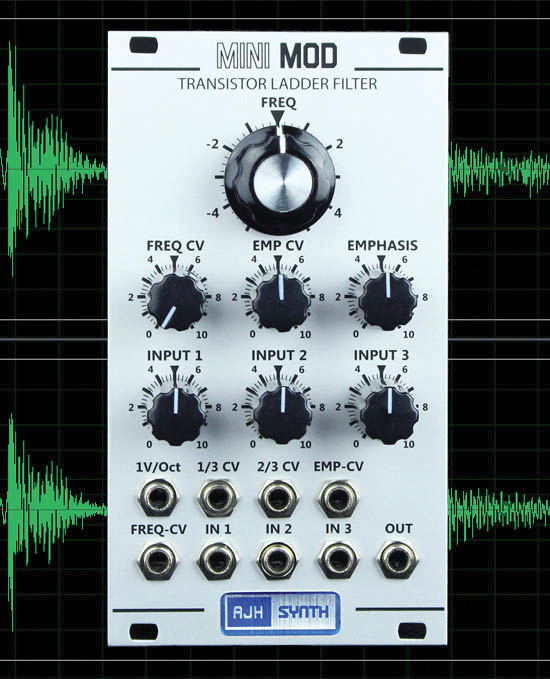 Gating
The Envelope module, or ‘Dual Contour Generators’ as described by Moog, is faithful to the original concept, offering either an AD or ADSD envelope pattern.

Thanks to some clever engineering, repeated gating will result in an increase in amplitude as the signal increases. The phases are snappy or long, at 10 milliseconds to 10 seconds, but, being based on the Model D, not as snappy as some other envelopes.

It’s nice to have two envelopes in one module, although the lack of a full ADSR leaves you wanting. Even Moog eventually fitted full ADSR envelopes to its machines. However, there are plenty of other third-party options.

The Dual VCA is equally as colourful as the earlier sections of the synth, being a Discrete Cascaded design, but even this humble VCA has a trick up its sleeve. The timbral colour of this module is stunning in its default. However, it is also possible to remove a jumper from the circuit board, which will induce a tube-like harmonic distortion.

This, in turn, offers an increase in gain, but the benefits that accompany it are huge. It would have been useful to have a switch on the front panel to implement this.

Alternatives
With the release of the Moog Mother 32, that model is the obvious current alternative contender, although being single-oscillator based, the Mother 32 will not sound anything like as expansive as a complete Mini Mod system.

Adding a Mini Mod VCO to a Mother 32, however, is a very enticing prospect. The Studio Electronics Modstar 5089 Filter is also based on the Moog transistor ladder filter, and will go part of the way to creating that classic Moog sound.

Do I Really Need This?
The most tempting issue here is how wonderful these units sound as a system, and with that comes the inherent price tag. However, if the complete system is out of your price range, I would heartily recommend looking at the VCO, VCF and Glide/Noise modules to integrate into an existing system. The VCOs, in particular, will combine beautifully with other analogue and digital modules, and will add plenty of analogue colour to your palette.

Noisy Glides
The dark horse of the system is undoubtably the Glide + Noise module, which, although largely a utility module, is one of the highlights. Apart from the white, pink and red noise output section of this module, the glide is the star of the show.

The rate of glide is controlled by the pot on the front panel, along with two switches to initiate the glide and indicate direction. It is possible to select up, down or both. This proved incredibly useful, and is an addition to the original Model D circuit, on which this is based. The glides have a wonderful sense of shape and the addition of a direction switch adds a very useful dynamic.

These modules should not be considered soundalikes; they are far more accurately replicas and are incredibly similar to my memories of the Model D, bearing in mind that all Model Ds will sound a little different.

Putting the Model D comparison to one side, this is a huge-sounding set of modules that benefit from being a full set, although I found the VCOs especially outstanding nestling under my other Eurorack VCO/DCOs, in the way that so many artists have used Moogs before. The system sounds outstanding; full of analogue fatness, with plenty of harmonic overtones.

Some may not want a complete Mini Mod system in their Eurorack, and thankfully the individual modules are available as separate components. These stand up exceptionally well with other Eurorack designs and will happily find a harmonic or utility-based role, without any fuss, but while making a difference, in a very positive way. 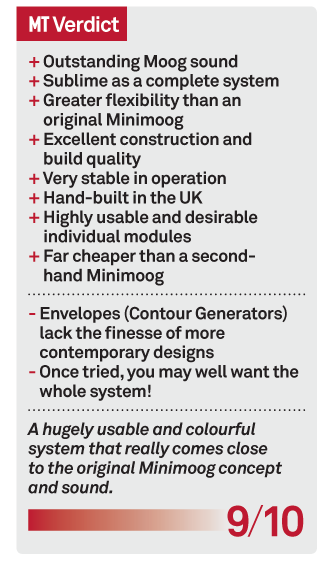