The Advance Music Production Suite promises 60+ full instruments, effects and sample packs worth $5000 but retails at just over a tenth of that price. ‘Too good to be true?’ asks Andy Jones. Details Price $599 (UK street £479.99) Contact InMusic Europe +44 01252 896040 Web www.airmusictech.com One hard drive, many, many virtual instruments, effects and samples. If […] 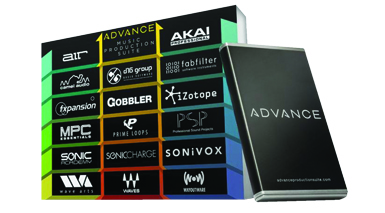 The Advance Music Production Suite promises 60+ full instruments, effects and sample packs worth $5000 but retails at just over a tenth of that price. ‘Too good to be true?’ asks Andy Jones. 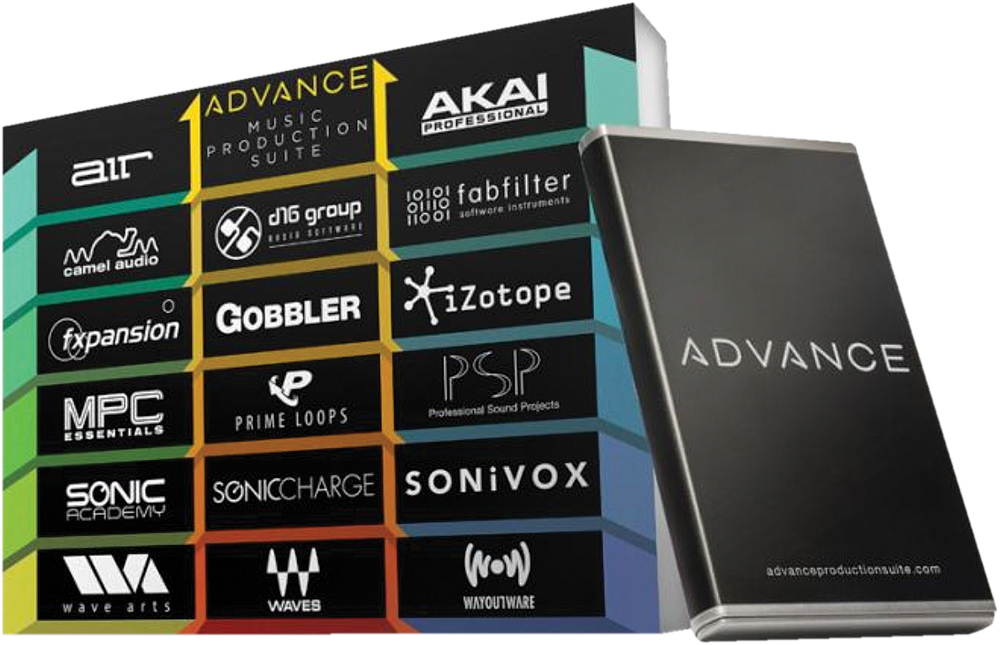 One hard drive, many, many virtual instruments, effects and samples. If you were to pay for the content on this drive separately it would, at one time, have cost around ten times the asking price. AIR Music Technology have created it – actually, rather assembled it. The company has included a bundle of its own plug-ins alongside those from around 16 other companies. In total you get over 60 plug-ins and sample collections.

I know what you’re thinking: these are cut-down versions or old versions of the plug-ins. Well, it seems not. Sure, some like iZotope’s Stutter Edit might have been around for a few years but it’s still a worthy inclusion. And as for the cut-down version thing, this is strongly refuted on the AIR Music Technology website which states that: “All software programs, effects, and sample collections are full, unlimited versions complete with full-functionality, registration and authorization rights, and manufacturer-entitled support.” 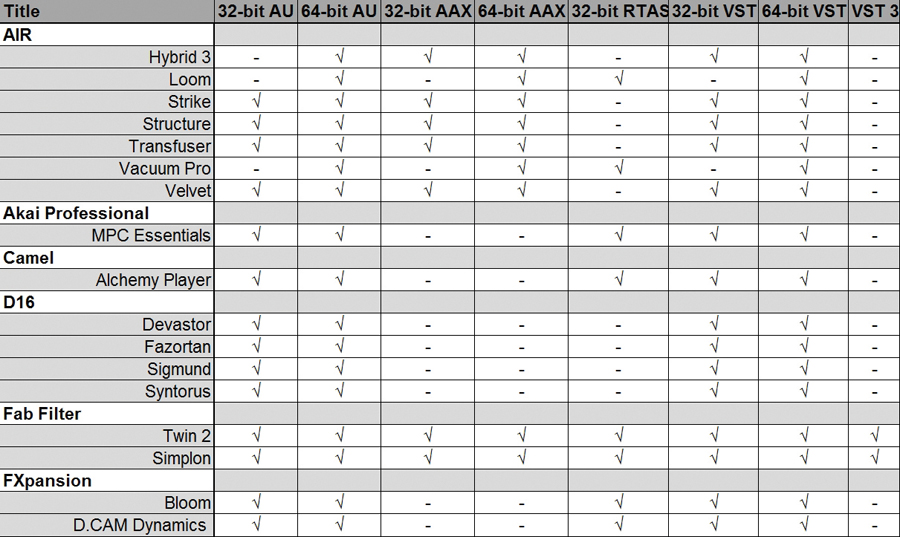 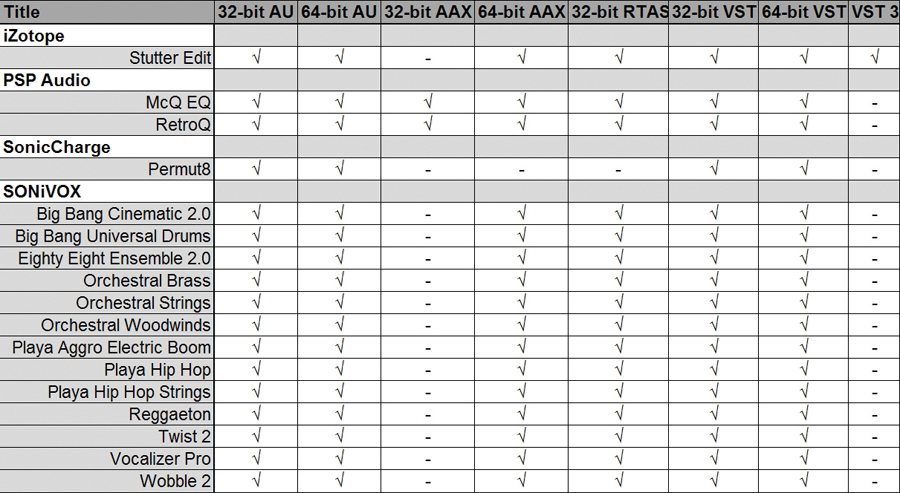 To test that claim I’m going to install some but not all. I suspect you won’t want everything included here, and if your hard drive is as full as mine you’ll probably have a tough selection process whereby only the best or very specific plugs get installed these days. Besides which, installing and registering them could take longer than it takes to write this review…

Install. And Register.
If I was being picky here I’d have expected a ‘shell-like’ installation system where you get to choose from the whole list, click enter and sit back and watch your hard drive fill. But sometimes I think I live in a fantasy land because, of course, it’s not going to be that simple. But to be fair, it’s not ATM’s fault, and again the company has stated very clearly what you can and can’t expect, so some plugs need to be installed individually, some as choices from groups.

As for choosing what you want, the drive simply lists the plug-ins in company order alphabetically. A better way of choosing is to visit the AMT website and select by category, as there’s a list of plugs by screenshot with short descriptions – enough to tell you if you want to install each, anyway. There’s also a list by format/plug-in platform under the FAQ section.

So I’m opting for AMT’s Hybrid 3 and Sonivox’s Wobble 2 and Twist 2. It has to be noted that many of the instruments come from Sonivox and AMT, although I did note FabFilter’s excellent Twin 2 and Way Out Ware’s superb emulation of the ARP 2600 in there as well which I already own. Twin 2 is a superb synth that is great for electronica and dance with lots of presets with plenty of movement.

Way Out Ware’s ARP emulation is, from memory, almost more realistic than Arturia’s, with a gritty and dirty (in a good way) sound. Effects wise I opt for – and I have to admit I’m feeling like a kid in a sweet shop at this point – D16’s Devastor, FXpansion’s Bloom and the aforementioned iZotope Stutter Edit.

The effects take less than five minutes each to install and AMT’s and Sonivox’s instrument installers make it easy to install all of the companies’ instrument plugs in one go.

I suspected that booting Logic up might reveal some difficulties but when its AU scanner found six new unregistered plug-ins in one go it tried to offer registration for each and quickly fell over. A better Logic solution is to ‘ignore’ the new plug-ins and install them within the software using the serial numbers on the cards provided with the drive. 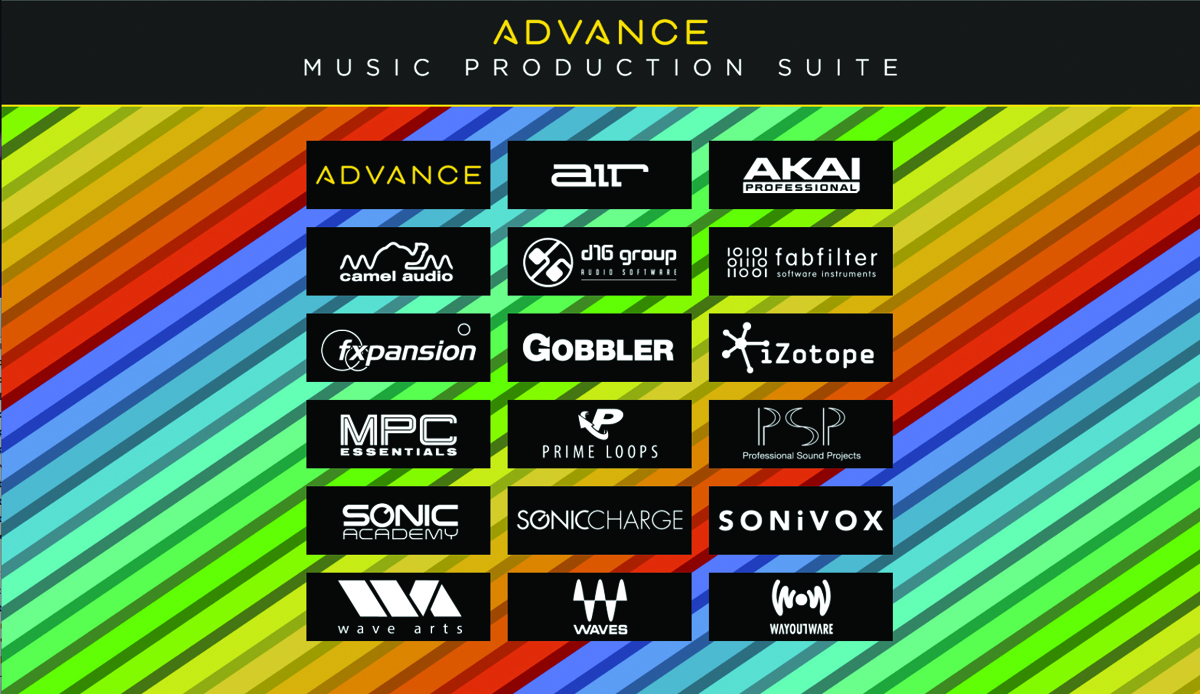 Either select the plug-ins you want to install from this handy A-Z manufacturer list, or head over to airmusictech.com/advance/ to view screenshots and short descriptions of each

Obviously there will be registration processes to go through, serial numbers to enter and general faffing around whenever any software these days is authorised, but you knew that, and it’s no tougher here than anywhere else.

The Sonivox and AMT ones were probably the most straightforward, with authorising links appearing on your desktop. After five registrations – and feeling I’d given too much information to the internet, I mean do you really need my middle name, Sonivox?! – I am up and running, although the AMT and Sonivox plugs were initially not recognised by Logic but this was quickly sorted after contacting AIR Music Technology (you too might need to move a few folders into the right place).

It’s taken the best part of an hour by this point so I’d advise blocking off a morning if you’re installing more than me, which undoubtedly you will. And if you’re doing the lot in one sitting, good luck!

As to the plug-ins themselves, this review is really about the overall picture and the process, but suffice to say I am happy with the range I’ve downloaded. First impressions are good, especially Bloom which has already beefed up many of my parts and has some great, descriptive presets that take the hard work out of knowing where to apply them to. Stutter Edit is looking slightly dated and requires maximum strength glasses. It’s consequently quite fiddly but still sounds great.

Devastor is probably the one I’ll end up using most, with a simple but effective interface and a plug-in that simply works with a big range of different sounds. Try it in extreme mode on your drum loops for something a bit different… 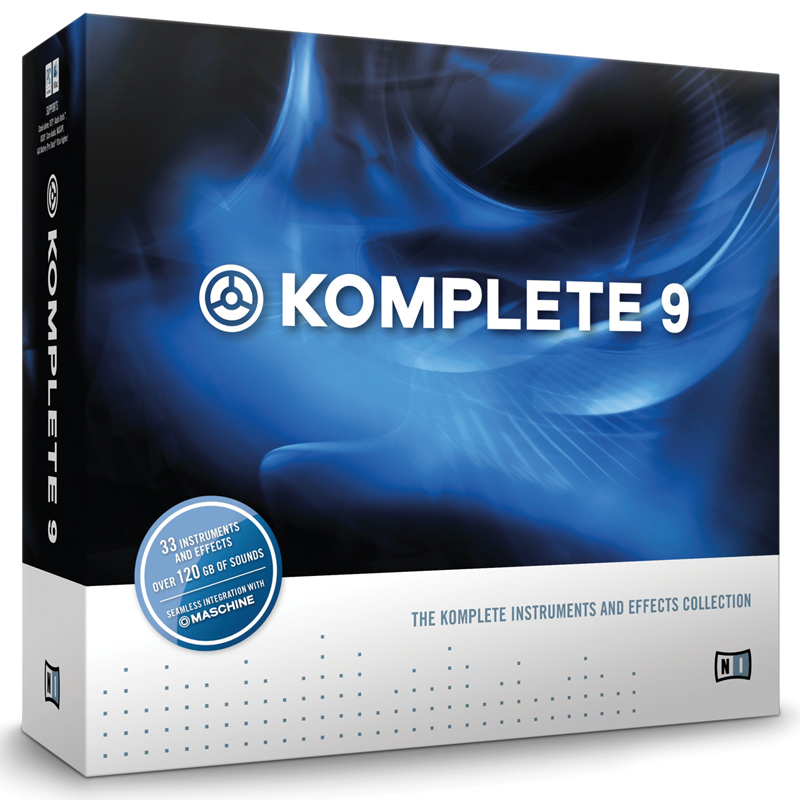 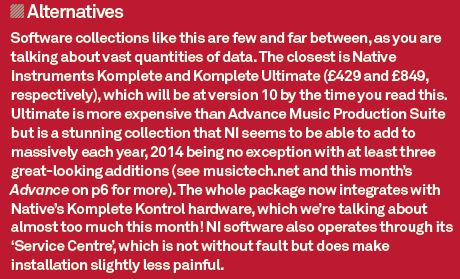 The synths are super (you can never have too many). Wobble 2 is perhaps a bit too big and grimy for someone of my years but it’s probably going to find use in music it was not intended for – always a good way to treat any instrument, in my book. Twist 2 is one to sit down and play with. Explore its morphing capabilities and you will quickly come up with new sound designs (often in my case without being quite sure how).

Finally Hybrid 3 comes packed to the rafters with presets – rather like Rob Papen’s Blue in this respect and others. It has lots of modulation possibilities and overall enough going on to get huge sounds.

I could pick out individual highlights of Advance Music Production Suite that are worth buying it for alone (FabFilter Twin being one for certain). But like I have said previously, this is more about the package as a whole and in that respect there’s little to argue about on a ‘cost versus what you get’ level.

Had I simply chosen the plug-ins I’d wanted from the list they would have cost well in excess of the asking price. Throw in the rest and you have an absolute bargain.

Then there is the additional sample content I haven’t mentioned yet which includes two collections of presets from Camel Audio for Alchemy Player and 16 collections from Prime Loops covering everything from dubstep to cinematic. And ‘variety’ can certainly be applied to the whole of Advanced Music Production Suite. 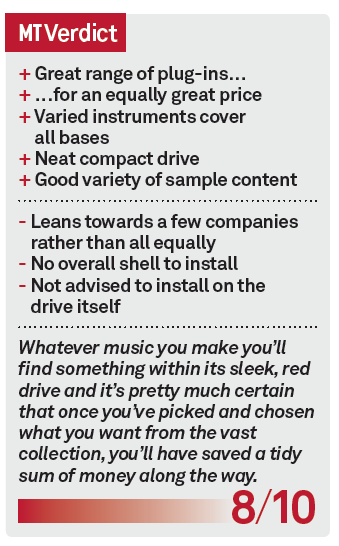