Abstract Data has an expanding line of highly useable Eurorack modules, perfect for minimal beats and more. Dave Gale gets triggering and modulating with the Octocontroller… Details Manufacturer Abstract Data Price £299 Contact Abstract Data Web www.abstractdata.biz For some time now, I have always been drawn to modules that could act as the beating heart and […] 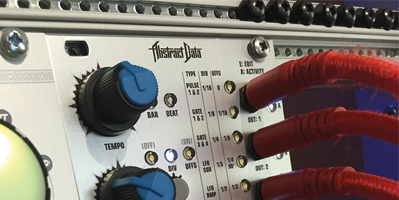 Abstract Data has an expanding line of highly useable Eurorack modules, perfect for minimal beats and more. Dave Gale gets triggering and modulating with the Octocontroller…

For some time now, I have always been drawn to modules that could act as the beating heart and soul of a Eurorack system. Sure, there are multifunctional sequencers out there, but in a strange way, it feels like this is overcomplicating the Eurorack ideal, and largely looking to replace the studio-based DAW.

So when I first came across Justin Owen, the technical and creative force behind Abstract Data, I could hear a lovely minimal techno groove emanating across a show-hall floor, with all the triggers being generated by the Octocontroller. Justin was kind enough to talk me through the basics of this cunning little module, so now it’s time to put it into a larger system and see what it can do.

The first thing to establish is, what does it do? It might be easier to tell you what it doesn’t do, but let’s list some of the credentials that are on offer. Firstly, it is an eight-output device, all of which can be output simultaneously. All eight outputs are assignable, and the choices for output type are extensive, so here goes… Pulse output, Gate output, four LFO types, Noise, Sample & Hold (as both CV and Gate), 10 preset Arpeggios (Pitch Sequences) and 10 pre-programmed Loops (Drum Triggers).

All of the available outputs are clocked, either to the internal clock, or to an external clock of your choice. However, each of the eight outputs, as well as being assignable in output type, is also assignable in terms of clock division or multiplication. 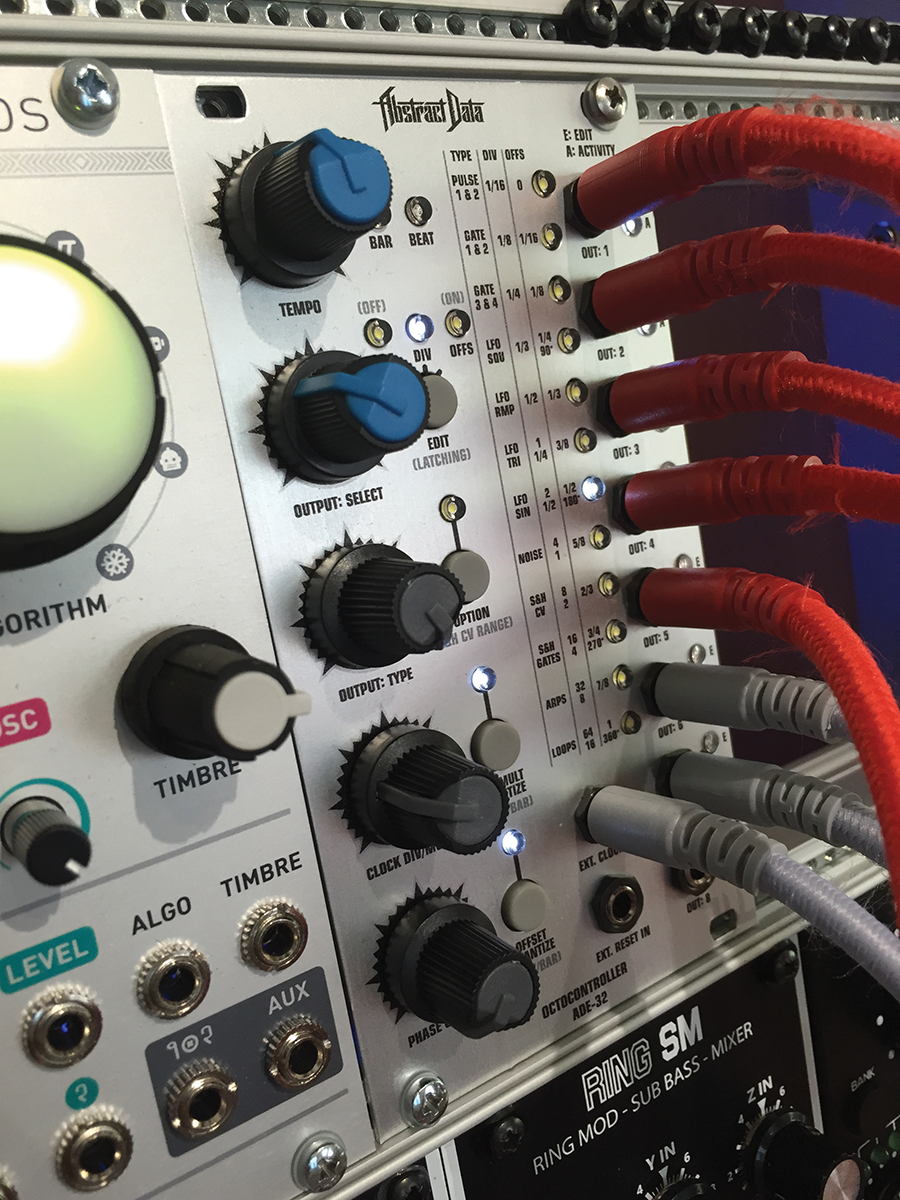 This is excellent on a couple of levels. Take the notion that you want to employ two different LFOs, both running at different rates. This is pretty easy to put in place and have them both sync’d to the master clock, but also easy to offset one against the other, so that they play at different rates, or at different locations within a bar.

But it doesn’t stop there, because you could also set up a basic drum track, using a few gate outputs, employing the same principle.

Time to get it patched in… so my first task was to use some basic gate triggers to set a drum groove in motion. The eight outputs are clearly labelled, from top to bottom, and selection is clear thanks to the Output Select pot.

Turning this navigates to the output you wish to work with. Next to each output are two bright LEDs: the first of which is illuminated blue if selected for editing, and the second of which flashes to indicate activity; very easy to work with and nice and clear as well.

It’s then a case of selecting the output type you want to use (i.e. Gate, LFO, etc), followed by the appropriate clock division and phase, each of which is assigned via a dedicated pot to each function. Although easy in operational flow,

I did find myself squinting to see the legends, which align themselves to the illuminated LEDs. The fascia typeface is a little on the small side, but then with the Eurorack form factor, and the amount of functionality in a module like this, it’s a battle between offering that functionality and fascia real estate.

I’m sure with youth, to the tune of about 20 years, I would not find this quite so much of a problem, unlike now, with my deteriorating eyesight.Having set up a basic kick-and-snare pattern, both of which were triggering on beats 1 and 3, it was then just a case of moving the phase of the snare to sit on beats 2 and 4. Job done!

The hi-hat followed, but with greater clock subdivision, to give either a straight 8th- or 16th-note pattern. Triplet-based 12th-note patterns are also present, for a more lilting feel.

Next came some LFO patterns, in the shape of Sine, Triangle, Square and Ramp, all doing exactly what you would expect, but with the added bonus of both clock-division options and phase shifting; but up next was a favourite of mine, in the shape of a Sample & Hold CV. Once sent in the direction of filter Cut Off, it did exactly what I hoped for, with the minimum of fuss, and the prerequisite clocking options.

Finally, there are two pre-programmed elements, in the shape of arpeggiator types, which could more accurately be described as four-note mini-sequences, each
with a flavour of a well-known song, and then the Rhythmic Loops, which are essentially drum loops, and can be called upon to trigger in sequence. These are quite fun and usable, and easily changed on the fly, but via a method of scrolling round the 10 available patches.

As I have already alluded to, this unit is fully clockable, and will act as a clock master with clock output, or accept a clock input, and it is possible to set the clock resolution, so everything will hook up without a hitch.

It’s always difficult to compare multi-function modules of this kind, especially in a module that offers so much. A close, though still slightly different module is the Expert Sleepers Disting Mk3 (reviewed MT 159) which offers a whopping number of functions, but if drum triggers are your thing, the Mutable Instrument Grids is an excellent automatic and fully clockable module, which also offers elements of chaotic randomisation, alongside more traditional settings.

There are few fully clockable LFOs, but a favoured module is the Vermona fourMulator which, as the name suggests, offers four LFOs which can be clocked, sync’d and fully phase nudged. 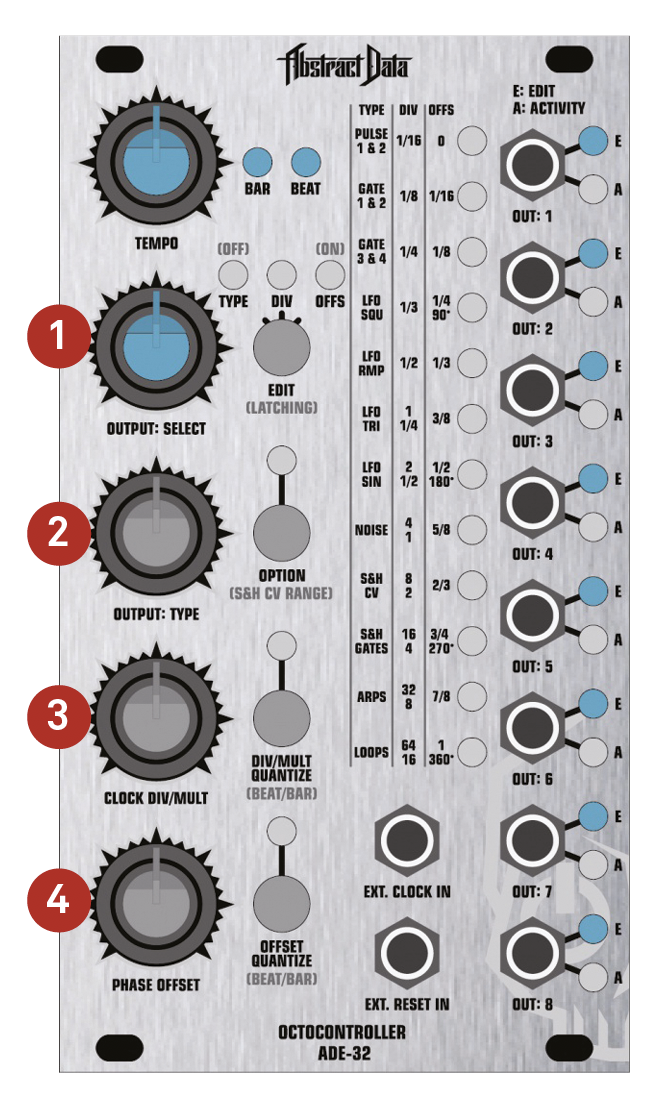 1: Output Select – the Output Select Pot sweeps through the eight assignable outputs, indicating which is in edit mode, thanks to a bright and clear Blue LED

2: Output Type – select the ‘Output Type’ via the pot, which similarly scrolls through the list of legends. Clear and simple

3: Clock Div/Mult – the ‘Division/Multiplier’ pot selects the clock rate for the selected parameter, meaning that all functions can operate in sync, but in their own bar/beat placement

4: Phase Offset – and finally, the phase of each parameter can be shifted through beats/bars, allowing maximum flexibility for placement of the parameter, within a given bar long sequence. It’s so flexible

When I first came across the Octocontroller, I was immediately struck by its wealth of usability, coupled with a rather elegant patch matrix, which makes selection and adjustment a breeze, which is no small thing in a module of this size.

Make no mistake, it might be small, but it packs a big punch, way above its size. Put it towards the centre of any system and you’ll get plenty of mileage out of it. 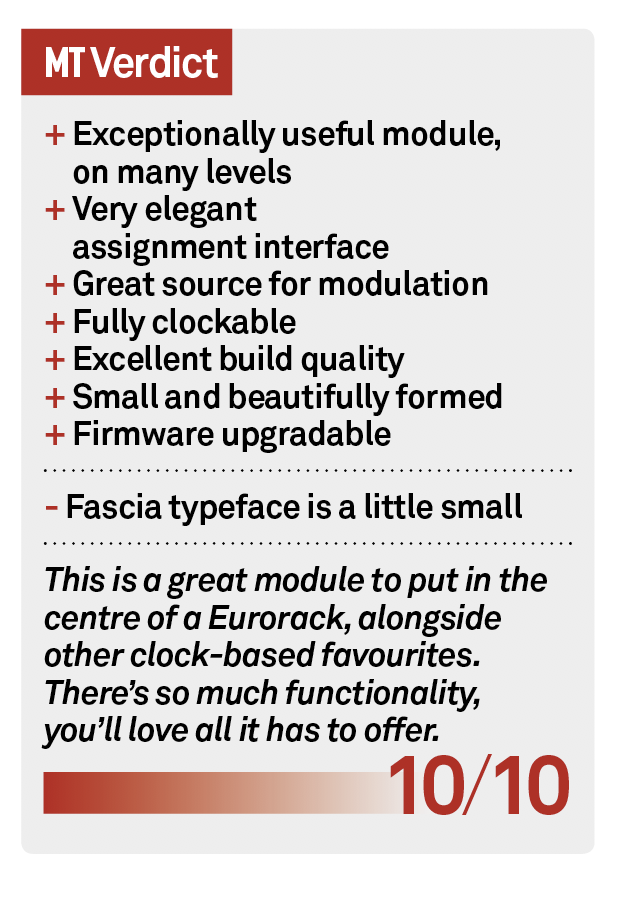