FX Mate from Abletunes is a multi-effect plug-in with eight dials that have been mapped to multiple parameters under the hood. Alex Holmes goes in for a closer look… Price £37.50 Contact Abletunes FX Mate key features: Simple multi-effect plug-in 8 Effects in one with 8 dials VST or AU, 32-bit and 64-bit 32 varied […]

FX Mate from Abletunes is a multi-effect plug-in with eight dials that have been mapped to multiple parameters under the hood. Alex Holmes goes in for a closer look… 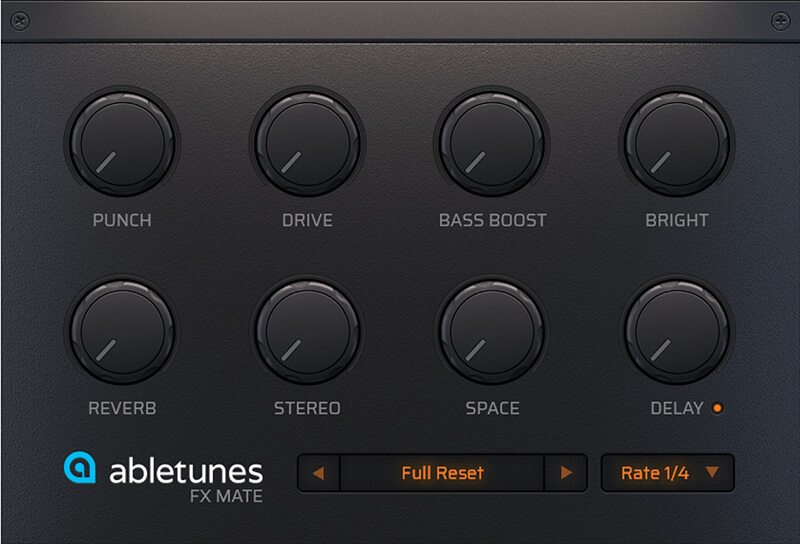 The self-explanatory controls for Punch, Drive, Bass Boost, Bright, Reverb, Stereo, Space, and Delay allow you to very quickly add polish to any sound. You can also change the delay rate, and switch on and off a pretty effective stereo delay effect. It boasts 32 eclectic presets and operates at both 32- and 64-bit.

Essentially, it’s similar to something like Waves’ One-Knob series, but with the added advantage of being in a single, easy-to-use plug-in. Our only issues with FX Mate were that we found the GUI to be a bit large for such a simple plug-in, the Stereo effect wreaks havoc with the phase, and it would have been nice to have an output level so that the final effects level could be volume matched.

That being said, overall we found that FX Mate is a pretty great little plug-in and one that’s a useful addition to our sonic arsenal, providing surprisingly decent results very quickly and efficiently. And for an affordable price that might make it a more attractive proposition.