After an incredibly long wait since version 8’s release, Live 9 is finally here, accompanied by an Ableton-developed controller called Push.  This is a controller that Ableton describes as an ‘instrument’,  (a review of which will appear later in the week) which sounds promising as Live itself has long been seen as more of a […]

After an incredibly long wait since version 8’s release, Live 9 is finally here, accompanied by an Ableton-developed controller called Push.  This is a controller that Ableton describes as an ‘instrument’,  (a review of which will appear later in the week) which sounds promising as Live itself has long been seen as more of a creative, compositional tool than an audio/MIDI workhorse for the studio. 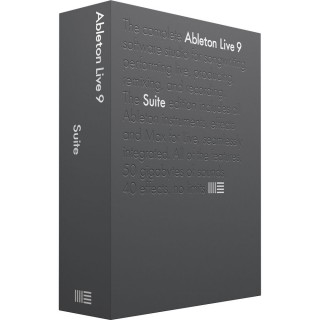 Live’s primary appeal has always been its two distinct approaches to workflow and the way in which they interact. For structuring tracks, Arrangement View enables you to work from left to right in a linear fashion. Session View, meanwhile, is a loop-oriented mode, letting you focus on musical ideas or sketches without needing to think about the arrangement stage. It’s very much the reason why many people turn to Live even if it’s not their primary platform.

These ‘part-time’ users often believe that Live isn’t up to the task of full track creation and mixing, probably because Live has been slow to incorporate certain features that users of other DAWs take for granted. For instance, automation curves have only just been added, and you still can’t take the classic approach of recording lanes of audio for compiling together quickly afterwards. But that’s missing the point: Live isn’t the same as other DAWs, so it’s wrong to try to compare them in such a literal way, feature for feature.

Live 9 comes in three flavours: Intro, Standard and Suite. As you’d expect, the  entry-level Intro has limitations that reflect its price. These include a small number of ‘idea spaces’ in Session View (Scenes), a maximum of 16 audio/MIDI tracks, and just two audio inputs and outputs. However, you do get a perfectly respectable, though small, production centre including drum devices and sample-based instruments along with Live’s flexible real-time audio warping. The feature set gets deeper as you move up to the next two versions, and for the rest of this review, the features discussed relate to these versions only.

After the 54GB install of Live Suite (Standard is a 12GB install), it’s evident from browsing the library that version 9 is more complete than ever (the complete package can be installed piecemeal if you prefer). Various genre styles and instrument types are included in Suite – far too many to list here, see Ableton’s website full details – but they cover most bases and alone justify the difference in cost between Suite and Standard – and that’s before we’ve even looked at the other Suite-only features.

Audio content aside, there are some other significant differences between Suite and Standard. Standard comes with the same three sample-based instrument devices as Intro, but it offers much more in terms of factory content. Suite’s instrument collection, however, is a lot more comprehensive, comprising analogue-style synth sounds from Analog, rich-sounding percussion from Collision, Electric pianos from Electric and string modelling from Tension. Operator caters for FM synthesis and Sampler offers a professional level of sampling that can accommodate multiple sample key-mapping and layering.

Live 9 builds further on the already solid foundations of Live 8.

Live 9 is an excellent example of how a company can radically update its software while retaining the familiarity and ease of workflow that made it so attractive in the first place. The new tools and features certainly improve its capabilities and should keep users happy for a good while to come.