8DIO’s virtual instruments can be heard on many a film soundtrack. Can its latest make the grade? Keith Gemmell finds out in our 8Dioboe Review. Details Price $139 (download only) Contact via website Web www.8dio.com Few instruments carry a lyrical melody above a full orchestra better than the oboe – Ennio Morricone’s Gabriel’s Oboe is […] 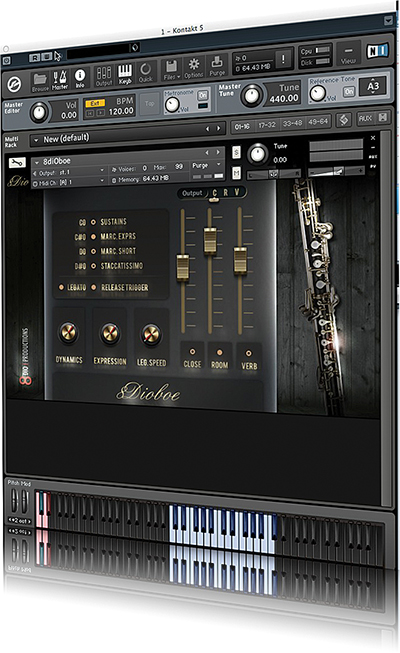 8DIO’s virtual instruments can be heard on many a film soundtrack. Can its latest make the grade? Keith Gemmell finds out in our 8Dioboe Review.

Few instruments carry a lyrical melody above a full orchestra better than the oboe – Ennio Morricone’s Gabriel’s Oboe is a perfect example. To reproduce the emotional intensity of such a solo using a sampled oboe is no mean feat, and finding an instrument that’s up to the job is equally difficult. Colin O’Malley and Troels Folmann reckon they’ve cracked it, though, with their latest virtual instrument, the 8Dioboe. Their aim was to capture the raw emotional intensity of a top-class performance. Absolutely no crossfading of dynamic layers was used in the programming, a technique that they feel is fundamentally flawed.

Go Solo
With just a single instrument patch for Kontakt 5 and only four keyswitched articulations (sustains, marcato expressivo, marcato short and staccatissimo), 8Dioboe is brilliantly simple to get to grips with. Legato can be triggered on or off by pressing a sustain pedal. When it’s on you can choose which articulation to play both before and after the legato intervals, which provides a great deal of phrasing flexibility. Staccatissimo, for instance, works well with legato for grace notes. When legato is switched off the instrument becomes polyphonic – particularly handy if you’re sketching out two oboe parts sectionally.

Oboes are tricky instruments to sample. The instrument is tiring to play for extended periods and sampling sessions can be tough on the player. The results can all too easily sound choppy, particularly across the wider legato intervals. Being fully aware of this, Colin and Troels sampled the oboe with a natural flow into vibrato.

By way of a test we played a few different notes and held them for their duration, which in the case of ‘sustain’ is about ten seconds. In each case the vibrato creeps in after about two seconds and intensifies a little before returning to a non-vibrato sound and fading down to silence. For most solo oboe work – particularly for slow melodies – this approach works beautifully and the results are very close to how a real performer would play the instrument expressively. The marcato expressivo articulations with shorter durations generally proved to be the most useful.

Again, like the articulations, the controls are minimal, comprising three rotary knobs for Dynamics, Expression and Legato speed. These are set by default to CC1, CC11 and CC16 respectively but can be changed.

As mentioned earlier, crossfading is a dirty word at 8DIO, so, instead, dynamics are dealt with using the mod wheel (CC1), which brings into play filters and volume curves. This eliminates the risk of chorusing and phasing sometimes caused by crossfading between dynamic layers. It works very well, especially when used in conjunction with Expression (CC11). The trick here is to duplicate CC1 as CC11 and have them work in tandem. Using Expression within a Dynamic curve can also be very effective.

Two microphone positions are available: close and room. The spot mic, as you would expect, is very detailed and intimate. The room mic, too, provides plenty of detail and we are advised to use this option most of the time. For a touch of reverb, a third option is the room mic processed through an early reflection reverb chain.

Express Yourself
Tonally, 8Dioboe is rich and assertive, just the ticket for a solo instrument of this kind. However, we found it a touch harsh for passages of a sweeter kind and it wouldn’t be our first choice if anything of a baroque nature was required. For writing and recording film music, though, it’s ideal, especially for slower tunes where the use of expression is paramount.

If you own an orchestral library then the chances are that you already have a decent solo oboe to hand that’s suitable for classical work and general orchestral use. They may or may not satisfy your expectations – in an expressive sense, that is. If not, then it’s worth paying a visit to 8DIO’s website, where you can listen to several demos. When it comes to solo instruments, it’s always good to have a choice.

A clever, well implemented virtual oboe with a vibrant tone that’s ideally suited to film work. Brilliantly simple to use.