When it comes to practicality and sheer flexibility, few mics can beat the SoundField offerings. Russ Hepworth-Sawyer explains why. The ST450, SoundField’s latest portable system, is battery-powered and designed for location recording, film and TV sound. Achieving a fantastic stereo recording of an acoustic performance can test your understanding and knowledge of microphone technique to […] 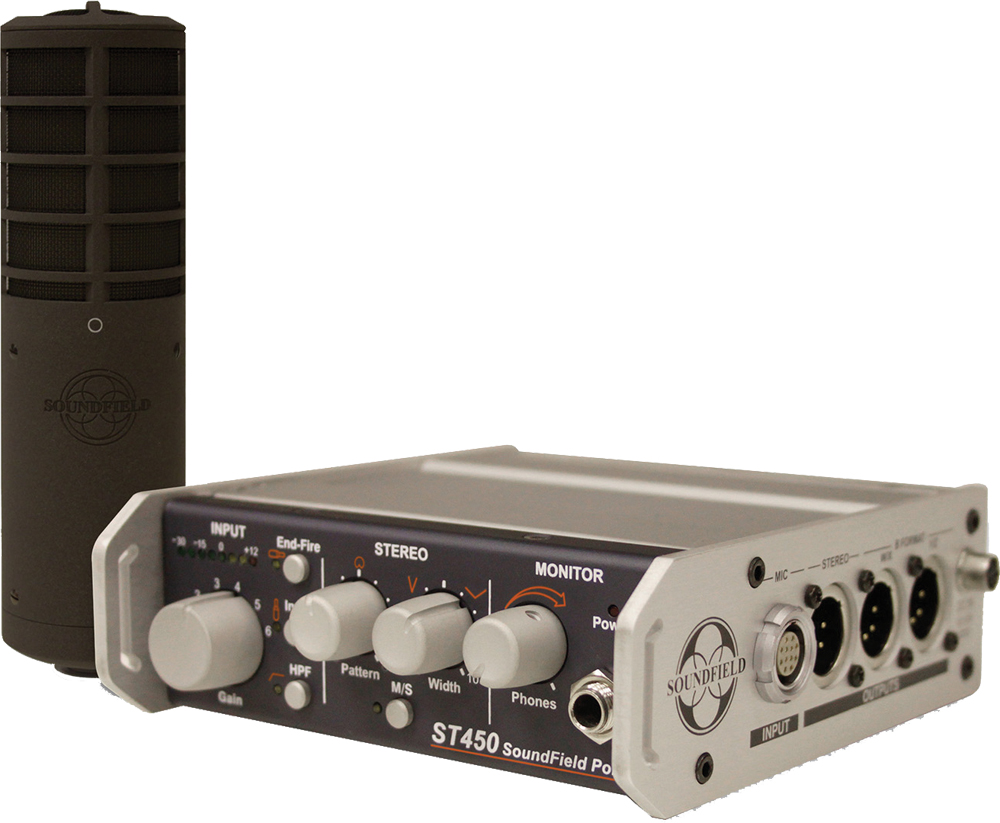 When it comes to practicality and sheer flexibility, few mics can beat the SoundField offerings. Russ Hepworth-Sawyer explains why.

Achieving a fantastic stereo recording of an acoustic performance can test your understanding and knowledge of microphone technique to the max. Opting for spaced-pair techniques will certainly provide a wide and exciting soundstage, but you may unwittingly introduce phase-correlation issues.

However, by employing coincident techniques such as X/Y, mid-side and the Blumlein pair we can mitigate against this eventuality as the microphones’ diaphragms are in close proximity and ‘coincident’: any sound reaching the left-hand microphone will reach the right-hand mic at exactly the same time. In this instance, what separates a sound in the stereo field is determined by its relative intensity at the microphones. 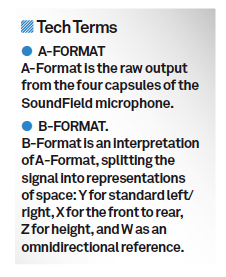 Phase coherence is always an important consideration, but particularly so in broadcast applications. If the recording is likely to ever make an FM broadcast, for example, it is worth noting that weaker signals will sometimes drop into mono when the modulation signal is weak, or indeed that some listeners will have mono receivers – such as the ubiquitous Roberts radio – or a mono television.

Phase coherence can be an issue when you’re making surround-sound recordings, too. Techniques involving five mics surrounding your performers can yield exceptionally good results, but they may introduce similar phase issues if folded/mixed down to stereo, either intentionally or as part of an automated process in some playback devices. 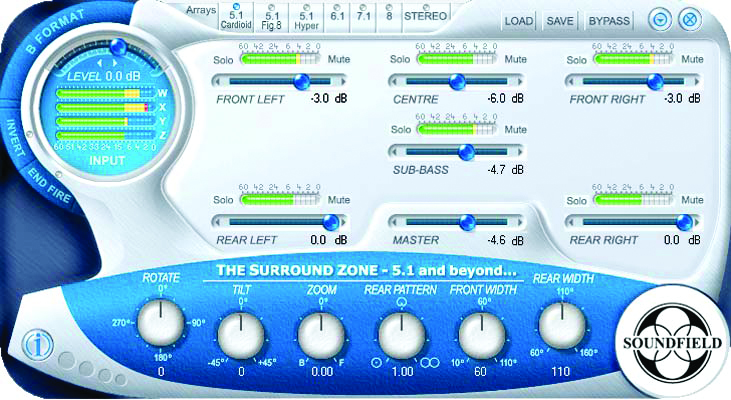 Surrounded by Sound
So what’s needed is a coincident mic technique involving five mics, surely? Now, that would work, but even if you owned five matched capsules and had the patience to do the necessary tweaking of those mics you might still be required to learn some new skills (as well as having to do some elaborate mic-stand work). And at the very least, a large setup like this would be an imposing one and get in the way of someone’s line of sight.

Inspired by techniques such as the Blumlein pair and mid-side decoding, Michael Gerzon and Peter Craven decided to develop a new kind of surround-sound microphone. Their concept was to record surround sound and decode the very same signal to a perfect stereo or mono representation. By employing four capsules in a tetrahedron shape it became possible to capture audio from all sides, and through clever decoding, provide a wide range of outputs – the SoundField microphone was born.

Unique to the SoundField microphone is its accompanying Control Box. The raw, direct output from the SoundField’s four capsules is known as A-Format. To make sense of this the SoundField’s Control Box processes it into a variety of different outputs, such as B-Format and stereo. B-Format is a representation of the space around the microphone and is split into four parameters: X, Y, Z and W 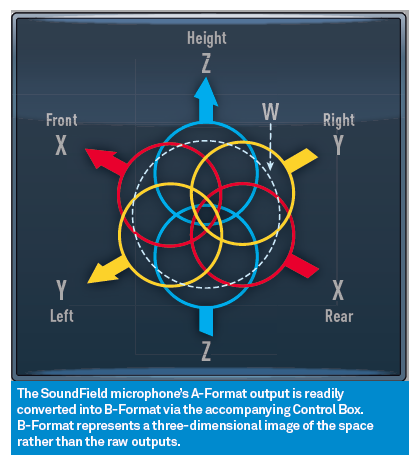 Cleverly, Y provides the standard left-to-right information, while X offers information about signals from the front and rear. Z, meanwhile, provides an impression of the height of the signal; W is a standard omnidirectional output and is referred to as the ‘pressure’ reference for the microphone.

The genius of the SoundField microphone is that the B-Format signal can be recorded into your DAW to be later decoded and adapted to fit current and future requirements. Just as with mid/side (M/S), the stereo versus mono signal can be adapted later on (providing that the signals are recorded in M/S format). 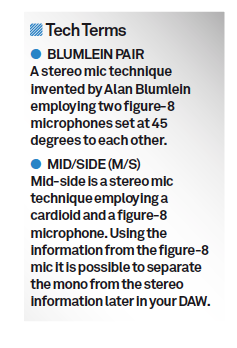 The same is true of B-Format: using SoundField’s software or hardware decoding, it is possible to extract or manipulate the presentation later, converting it from simple stereo to 5.1. Actually, it can go much further in that it’s possible to rotate the way the mic faces even after the recording has been made. Because B-Format captures sound from all around the mic’s location, it is possible to decode for all surround sound formats, both current and future.

When recording our aforementioned acoustic performance with the SoundField you might want to think a little differently about placement. Positioning the microphone so that it faces the musicians will capture the performance in the front face, and to the rear the ambience. However, immersing the SoundField in among the musicians will produce interesting, yet phase-aligned, results.

Fix it in the Mix
Typical to most SoundField Control Boxes is the ability to output both B-Format as well as stereo. In the case of the ST450, pictured top left, this is achieved via a breakout cable splitting two special XLRs into four standard XLRs outputting the X, Y, Z and W signals. Meanwhile, another stereo breakout cable is provided that terminates in two XLRs. SoundField permits the user to record a straight stereo signal or a mid/side-encoded version for later manipulation via a switch on the Control Box.

But the flexibility does not stop there because the Control Box can decode signals for you (there is even a rotary control that enables you to select the polar pattern of the stereo capture). On the ST450 this is infinitely variable from omnidirectional to cardioid, finishing up at figure-8. Additionally, the stereo width can be managed, literally from mono to wide stereo.

Recording the encoded B-Format signal offers the most flexibility later on when it comes to mixing – ‘insurance’, as SoundField refers to it. Some Control Boxes, such as the MKV, will permit later decoding; alternatively, you could employ SoundField’s Surround Zone plug-in software.

Future Proof
The SoundField microphone has been widely adopted both in the location-recording world as well as in broadcast applications, when multiple formats are often produced concurrently for both standard definition and multi-channel high-definition. B-Format recordings made with the accompanying Surround Zone software (or hardware alternative) provide maximum flexibility in any number of years’ time, perhaps when a new surround sound mix is required or, indeed, a stereo-only version. 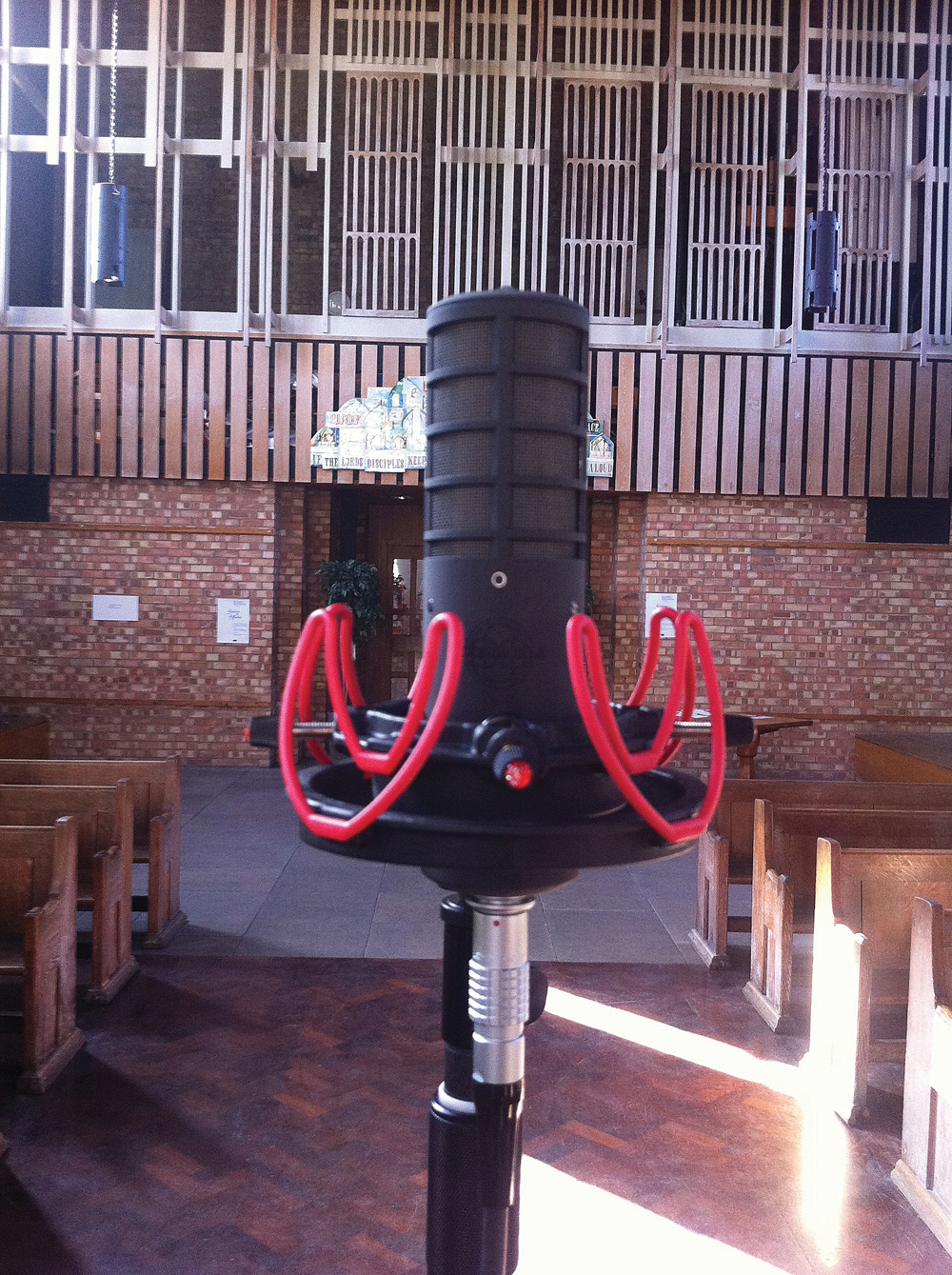 In a world of ever changing formats and the reality of high-resolution downloads possibly just around the corner, future-proofing your recordings could prove to be an extremely wise decision. The SoundField microphone offers the ‘insurance’ needed for the future presentation of your recordings – and even if you don’t ‘need’ surround-sound recording, the SoundField is an exceptional microphone nonetheless

● For more about SoundField, see: