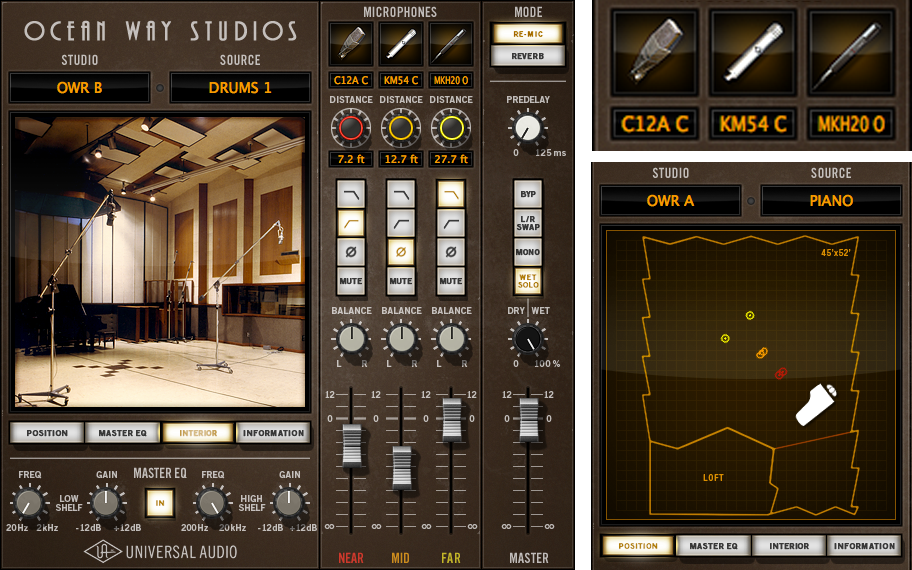 Universal Audio have released a very interesting looking plug-in, a three-year development period has resulted in a combination of mic/room and audio source modelling that replicates the unique environment of the legendary Ocean Way Recording studio.

In the meantime here’s the official press release:

SCOTTS VALLEY, CA • May 7, 2013 — Universal Audio (UA), a leading manufacturer of professional audio recording hardware and software, is pleased to announce the release of the groundbreaking Ocean Way Studios plug-in for the UAD Powered Plug-Ins platform. Developed over a three-year period by UA and Allen Sides, Ocean Way Studios is an audio processing first — combining elements of room, microphone, and source modeling so tracks sound as if they were recorded in the legendary studios of Ocean Way Recording.

Built upon UA’s proprietary new Dynamic Room Modeling, Ocean Way Studios provides the unique ambience and dispersion properties of various sources in the rooms at Ocean Way, as recorded through a selection of rare vintage microphones that can be dynamically positioned in real time via a simple click-and-drag interface. Ideal mic selections and placements are provided in both Ocean Way Recording’s “Studio A” and “Studio B” — the exact rooms and setups used to record some of the biggest acts of all time.

“Ocean Way Studios is one of the most ambitious projects in UA history,” explains Bill Putnam, Jr., UA founder and CEO. “We’re going far beyond previous convolution technologies to provide the complex interactions between room, source, and microphones — the things that make the acoustics at studios like Ocean Way Recording so special.”

The beautifully balanced, performance-inspiring rooms of Ocean Way Recording have shaped the sound of countless classic records, from Frank Sinatra and Ray Charles to Michael Jackson and Radiohead. The man at the helm of Ocean Way Recording for more than two decades, Allen Sides, provided guidance, sonic tuning — and access to his $250,000 collection of vintage microphones — throughout the Ocean Way Studios design process.

“The Ocean Way Studios plug-in comes as close to pulling up a set of my favorite mics at Ocean Way as I could imagine,” said Allen Sides. “The speed at which I can use this in a mixing configuration is ridiculous, and the results are stunning.”