ProQloud is a new web-based service designed to make website construction and business management easy for creatives and studios in the audio industry as well as in film and broadcast. Aimed specifically at studio owners, sound engineers, producers and other studio-based creatives, ProQloud offers an easy to use drag and drop interface to simplify the […] 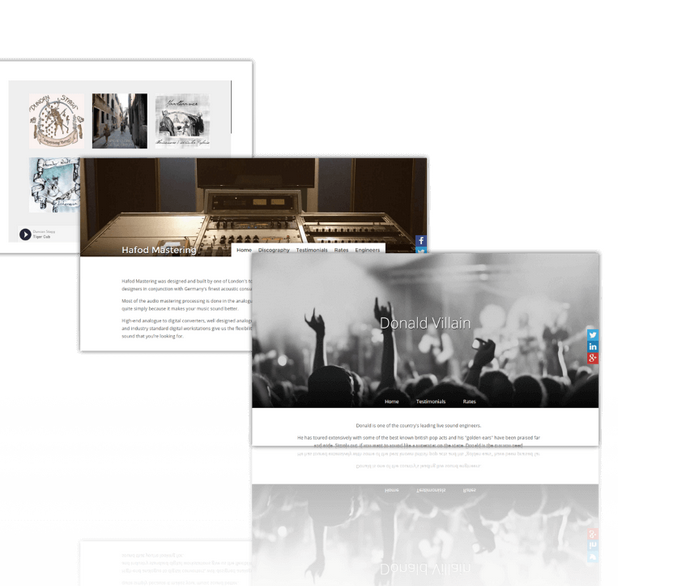 ProQloud is a new web-based service designed to make website construction and business management easy for creatives and studios in the audio industry as well as in film and broadcast.

Aimed specifically at studio owners, sound engineers, producers and other studio-based creatives, ProQloud offers an easy to use drag and drop interface to simplify the process of website creation. Read on for more official info about the launch of the service and information concerning the growth of the service over the summer…

Official Info
Cowbridge, Wales, June 2015 – ProQloud is a new web-based service designed to make website construction and business management easy for freelancers and studios in the audio, film and broadcast industries. Aimed at studio owners, sound engineers, record producers, session musicians, location sound recordists, editors and cameramen, ProQloud offers an easy-to-use drag-and-drop website builder, allowing users to get a site up and running quickly with their own branding, leaving them more time to be creative.

These responsive websites work equally well on all devices, including smartphones, tablets and laptops, taking away the headache of designing a site that works well on all platforms. Importing audio files and videos for showreels has been made as easy as possible, as has blogging and integration with social media accounts. For those who want even more from their website, a Qloud+ service gives users a suite of business tools built in to their web platform including unlimited file transfer facilities, invoicing, a web store and online payments.

The new business has been set up by a group of Welsh audio professionals, who have faced the problem of creating a convincing on-line presence for their studio. “Ten years ago we simply had to commission and build our own website,” explains Donal Whelan, Managing Director of ProQloud.

“These days, while there are countless companies offering easy website construction tools, none have really thought about what a freelancer or a facility in the audio or broadcast business needs. You can put something together using social media web sites, but then the first thing prospective clients see when they check you out is the social media logo, not your name or company. With ProQloud, you create something bespoke, that’s professional and specific to you, but without having to spend a lot of your precious time — so you can get on with making music or editing films, or whatever your creative speciality might be.”

Payment of a small monthly subscription gives users access to carbon-neutral cloud hosting and all the site construction tools for their website, including the ability to patch in their own domain name. Qloud+ customers pay slightly more per month for access to the business management tools and file-serving facilities.

“Most creative professionals don’t have the time to effectively broadcast their abilities to their prospective clients,” concludes Whelan. “We understand these issues because we’ve grappled with them ourselves. Being a freelancer in these industries is about making your creativity pay, and we believe ProQloud is a game-changer in that respect.”

The web address is proqloud.com

And also the following:

Cowbridge, Wales, September 2015 – Since its launch earlier this summer, the word about online website building and business management service proQloud has been spreading amongst creative freelancers, and the proQloud community has been growing.

Designed to make building a website easy for freelancers and studios in the audio, film and broadcast industries, proQloud offers an intuitive drag-and-drop website builder, allowing users to get a site up and running quickly with their own branding, and leaving them more time to be creative. The results work equally well on all devices and importing audio files and videos for showreels is simple. For those wanting more from their website, a Qloud+ service gives users a suite of integrated business tools including unlimited file transfer, invoice management, an online order system and online payments.

“The thing I like the most about proQloud is the fact that I don’t have to go through the process of getting a website developed, hosted, maintained, and optimised,” comments Vijay Benegal, a Mumbai-based mix engineer, now signed up as a Qloud+ user, who mixes songs in 5.1 and stereo for use in Bollywood film productions and commercial releases of the associated soundtracks. When Vijay was introduced to proQloud, he had been planning to set up a website to promote his mixing services for some time, but as he admits, he had never got around to doing it. Now his site is active at http://vijaybenegal.studioqloud.com/

“Building our site — https://purplerainstudio.proqloud.com — has been great, as a lot of social networks are integrated into our web page, like Facebook and Twitter,” adds Ashish Saksena, a sound engineer who owns Purple Haze Studios in Bandra, western Mumbai, and works on advertising, TV and live sound projects. “These days, a lot of our clients are looking for digital delivery of their content. With the delivery system built into proQloud, it has become a lot easier to send media files to our clients — and of course the privacy concern is also taken care of.” Ashish has been using proQloud since early in the summer and has been impressed by the responsiveness of the UK-based team, who have incorporated several of his suggestions into the service since he signed up.

Adam Whittaker is a British producer and mix engineer, currently living and working in Hungary but working for clients all over the world. He was introduced to proQloud earlier this year at just the point when he had begun to think he needed to create a site for his services on the Internet, and is now a Qloud+ user, with his site at https://adam.proqloud.com.

“I played around with various templates and a WordPress site, but never thought the end result was that great; something was always missing. The major difference with proQloud is that it’s designed as an end-to-end solution specifically for our industry, so there’s no need to figure out how to embed music players, videos, add a shopping cart or any of that stuff — it’s all in there.”

Adam also liked the quick and easy web design features proQloud offers, which let him set up what he needed quickly, so he could get back to work. “I’m not a web designer, so it’s great to have proQloud, which makes it really simple to present a good-looking site. I like to mix records… not do graphic design!”

Finally, Adam has praise for the integrated invoicing and billing features in the Qloud+ service, which help keep his finances organised. “Like a lot of, um… ‘creative’ people, that’s never been my focus, so it is great to be able to point people at the site and let them place orders, then get billed automatically. The whole nasty business side of things is just taken care of.”

“We’re very proud of what this service has achieved in the few months since we went live,” comments Donal Whelan, proQloud’s Managing Director. “We thought we might begin by spreading the word in Europe and in India, and we’ve had a really good takeup from both territories.

The service is continuing to expand with more web site design templates being added regularly, and feedback from users like Vijay, Asish and Adam is also being incorporated every month. Watching our community grow so rapidly is very exciting, and we look forward to being of service to more creative professionals in the months ahead.”