Polyend Tracker has landed, dialling us into a different age

An affordable price, a fresh workflow, and three synth engines that could have you tinkering for hours. 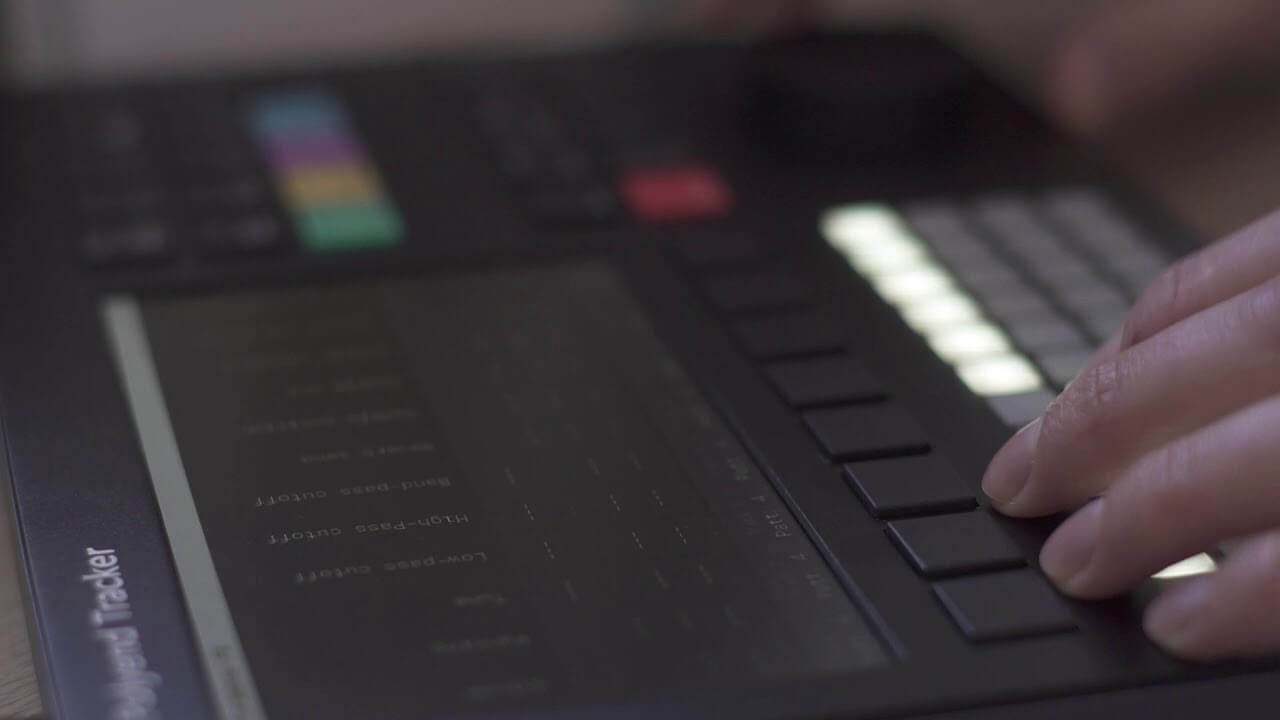 Over the last few weeks, Polyend has rocketed itself in the spotlight with Tracker – a sleek, modern-looking instrument with elements of the past creeping to the surface. The name stems from the retro, vertical tracker sequencer seen on the large built-in screen, which is the centrepiece of Tracker. Polyend designed Tracker with the intention of providing a DAW-less instrument that is capable of recording entire tracks, even entire albums, all on one machine.

With a price tag of €499/$599 and an impressive amount of features, this is sure to be on the wishlist of many producers, beat-makers and all-round gear nerds.

Polyend wants to make one thing clear about its new, innovative instrument. Namely, that this isn’t just for the veterans of music technology who grew up on Amigas and old PCs who will be familiar and nostalgic of the approach to sequencing. Tracker takes the enjoyable, inspiring features of classic tracking software and implements them into a package for all types of producers and artists to use creatively.

Immediacy and simplicity was the game with Tracker’s sequencer, omitting the now-ancient hexadecimal system once used to configure parameter values on original tracking devices. The workflow has been simplified so that users can now actually see the parameter’s values when it’s being adjusted. Navigated with a large dial and silicone buttons, new users needn’t be too hesitant to get hands-on with the instrument.

Some may be wondering why the decision was made to include the tracker sequencer. Polyend has recognised the influence of tracker software on modern electronic music, with artists like Aphex Twin, Venetian Snares, Bogdan Raczynski and Machinedrum gravitating toward old-school trackers. Chances are that if you’re reading this article, you would’ve heard some of the mindboggling music to come from that roster of artists.

“Basically, we wanted to make a small, portable instrument to write songs or entire albums on”, Polyend says. To make that dream a reality, the company has built Tracker with eight tracks, 48 instruments per project, 255 patterns per song and up to 128 steps per pattern. You can either record sounds in using the sampling engine, which can provide up to two minutes of sampling space per project at 16bit/44.1kHz resolution. 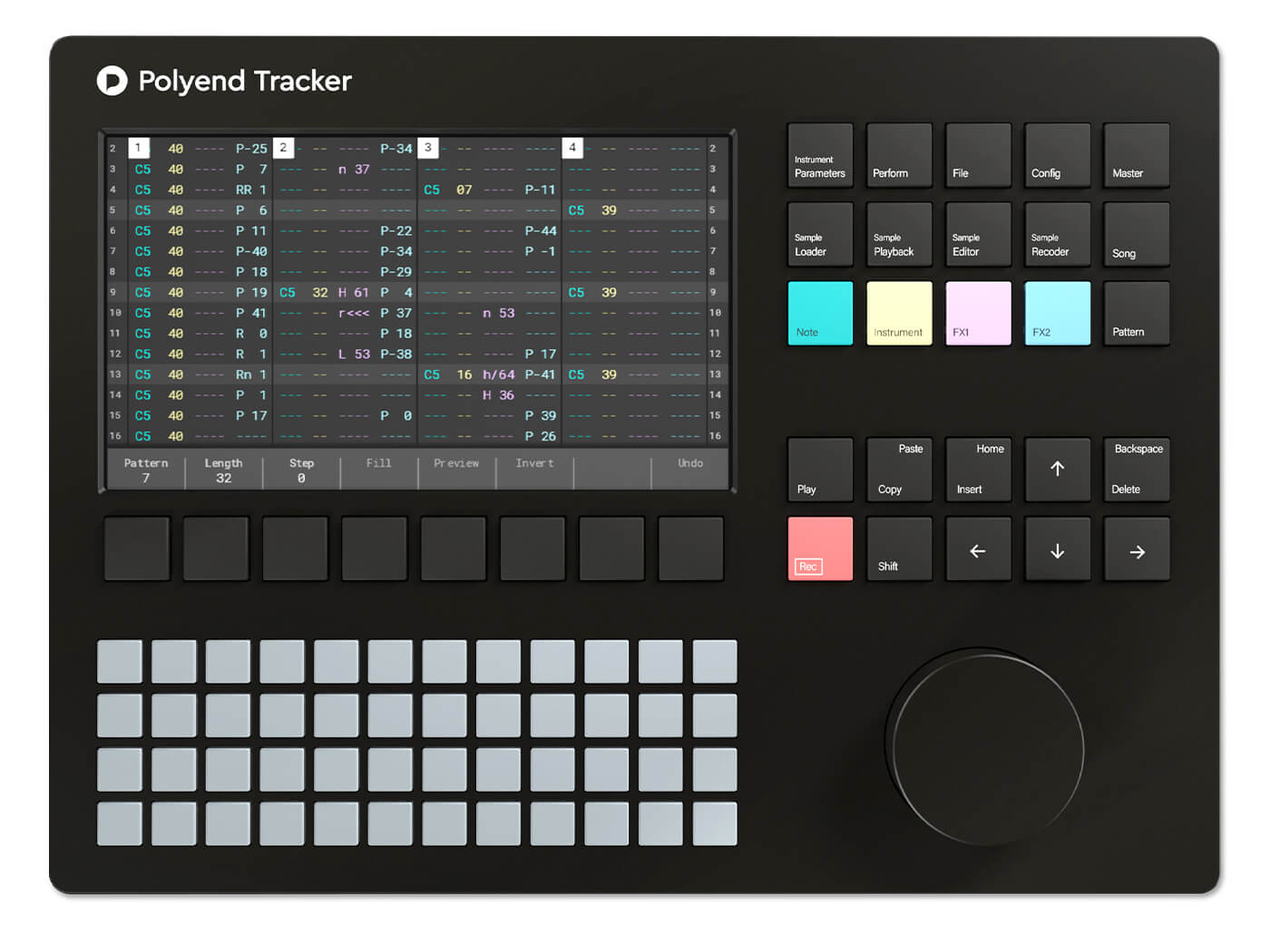 A truly unique feature to Tracker is the FM radio, being just one source to record your samples from, as well as line input and a mic input that’s compatible with low and high gain mics. You can also load in your samples from a MicroSD card that’s included with the instrument.

Getting sound out of Tracker should be no problem, thanks to its ability to be used as a sampler, built with slicing options, and as a subtractive, granular or wavetable synthesiser. The engine features amp, panning, filter cutoff, granular and wavetable position envelopes and LFOs. High-pass, low-pass and band-pass filters with resonance can be used on each instrument to shape your sounds to your liking.

“It’s also great to perform with punch-in effects and remixing your patterns. Something with dedicated controls, fast in use, stripped down to the basic functionalities, just enough to allow you to stay focused on your work”, a spokesperson from Polyend tells us. Performance mode features 12 live effects for each track, plus Tracker sports MIDI input for controlling internal instruments and recording patterns and MIDI output for sequencing external gear.

Not stopping at just the composition and production phase, Tracker has built-in functionalities to master and render your tracks to the internal memory as complete audio files. You can use a return track, limiter and bit depth adjustments to get the most out of your final projects, and export each song or pattern to WAV or nine stem files (eight tracks plus reverb track), also in WAV format.

Tracker is powered from an adapter using USB-C connectivity, and firmware upgrades can be installed via the MicroSD card. The OS allows for easy sharing of projects, patterns, and instruments, which is a nice touch. Polyend has worked with industry pros to make sure the finishing touches are spot on, as well as creating demo tracks to show Tracker in action. Richard Devine was one of these pros, teasing a clip of Tracker via Facebook.

If that wasn’t enough of a launch, Polyend has hinted at future updates, possibly including pitch envelopes and LFOs, import of .raw files, user-editable musical scales (complete with micro-tuning), and even an online platform to share projects, instruments and packs.

Polyend Tracker will be available soon for 499€/599$. Find out more at polyend.com