Novation have today excitingly announced their brand new Bass Station II!  The Bass Station II is based on the classic Novation BassStation from 20 years ago, but has been completely reworked for the 21st century. This new powerful analogue synth is made for bass but apparently will handle leads just as well. With two filters, […] 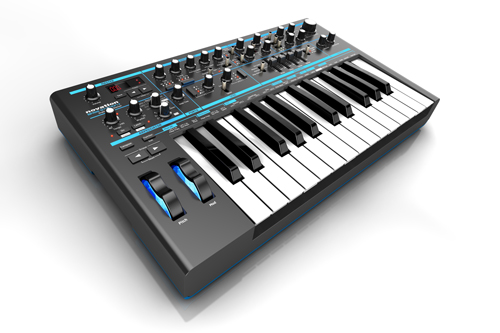 Novation have today excitingly announced their brand new Bass Station II!  The Bass Station II is based on the classic Novation BassStation from 20 years ago, but has been completely reworked for the 21st century. This new powerful analogue synth is made for bass but apparently will handle leads just as well. With two filters, two oscillators and also a sub-oscillator, patch-slave anf fully analogue effects section. Plus there’s a step-sequencer, arpegiattor, a two octave 25 note velocity-sensitive keyboard with large keys and an impressive modulation section. The Bass Station II also features MIDI I/O and USB connectivity.

Twenty years ago, Novation released the groundbreaking BassStation: a compact, analogue synth designed for fat bass sounds and bubbly leads. The original BassStation became a classic; now we present the new Bass Station II: an analogue monophonic synth but with a total re-design that brings it firmly into the 21st century, bigger and bolder than ever. It’s more than a bass synth; it’s versatile enough to kick out sharp leads and crisp arpeggios.

Bass Station II’s signal path is all analogue, including the effects section. It is based on three analogue oscillators (two independent oscillators plus a sub for rich bass sounds) and a noise generator; two discrete filters, Classic and Acid, with built-in overdrive; Distortion and Osc Filter Mod effects; two ADSR envelopes, two LFOs, and an Arpeggiator and programmable Step Sequencer. And that’s just scratching the surface of the synth engine. Bass Station II’s traditional control layout breaks everything into modules with 3 dedicated pots, switches and sliders. Unlike a traditional analogue synth, there’s plenty of storage for your own sounds – there are 64 factory presets plus 64 more slots for your own sounds in the hardware – and you can store more on your computer. 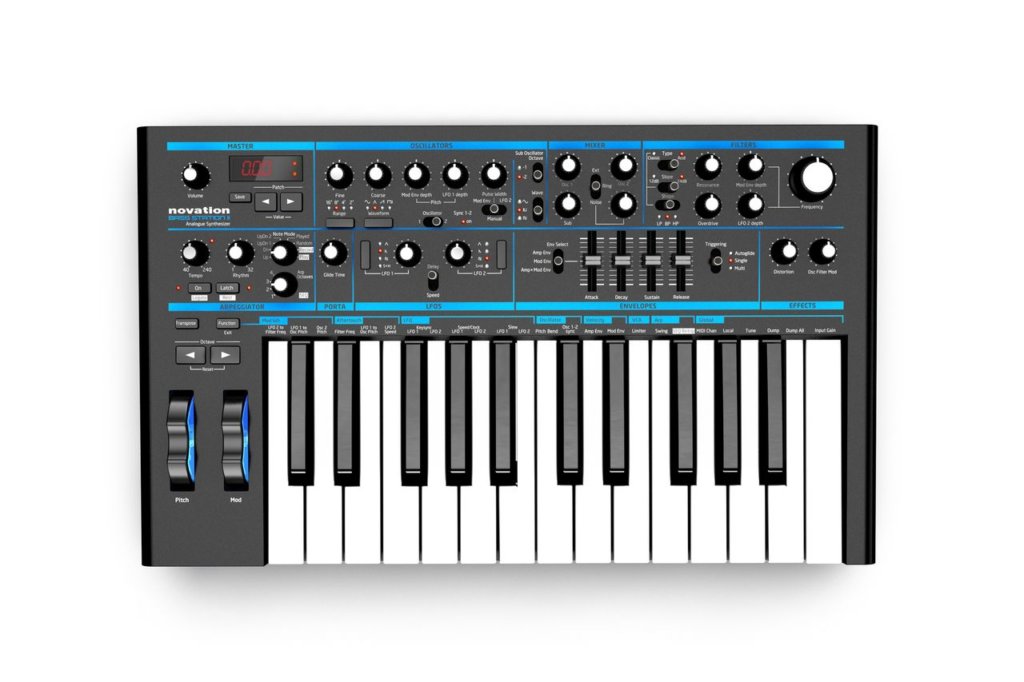 The original BassStation was released in 1993, but its heritage goes back a lot further: to the 1970s, thought of by many as the golden era of synthesis. Synth designer Chris Huggett has remained a constant design force for Novation over the years. Huggett has decades of experience in hardware synth design, having pioneered the development of digitally controlled analogue synths including the OSCar. He also designed such classics as the Wasp, released by Electronic Dream Plant in 1978 – and there is a direct line of descent from the Wasp filter to the awesome ‘Classic’ filter in Bass Station II.

Find out more at www.novationmusic.com/hardware-synths/bass-station-II

We also have an exclusive video from Novation, celebrating their 21st anniversary this year, this vid features the Bass Station II! Give it a watch!

Bass Station II is an analogue mono synth with a talent for bass, but a sound-engine that is versatile enough to kick out sharp leads and crisp arpeggios. It brings the best elements of the original BassStation into a brand new design with re-worked modulation, effects, filters and more; like the BassStation, but much, much bigger. The signal path is pure analogue – including the effects section. The hardware has been laid out in modules with dedicated pots, switches, sliders and buttons for all major parameters. Critically, you can store and recall patches on Bass Station II. It comes with 64 killer factory presets, space for 64 of your own sounds on the hardware, and you can store more on your computer. The key-mechanism consists of 25 full-sized keys that are velocity sensitive with assignable aftertouch. It has been developed as a ‘synth-action’ keyboard, where each key is individually sprung so it is light to the touch and highly responsive to the synth engine. Bass Station II is a fully class compliant MIDI device with MIDI I/O on 5 pin din ports – for connecting to other MIDI outboard – and your computer over USB. 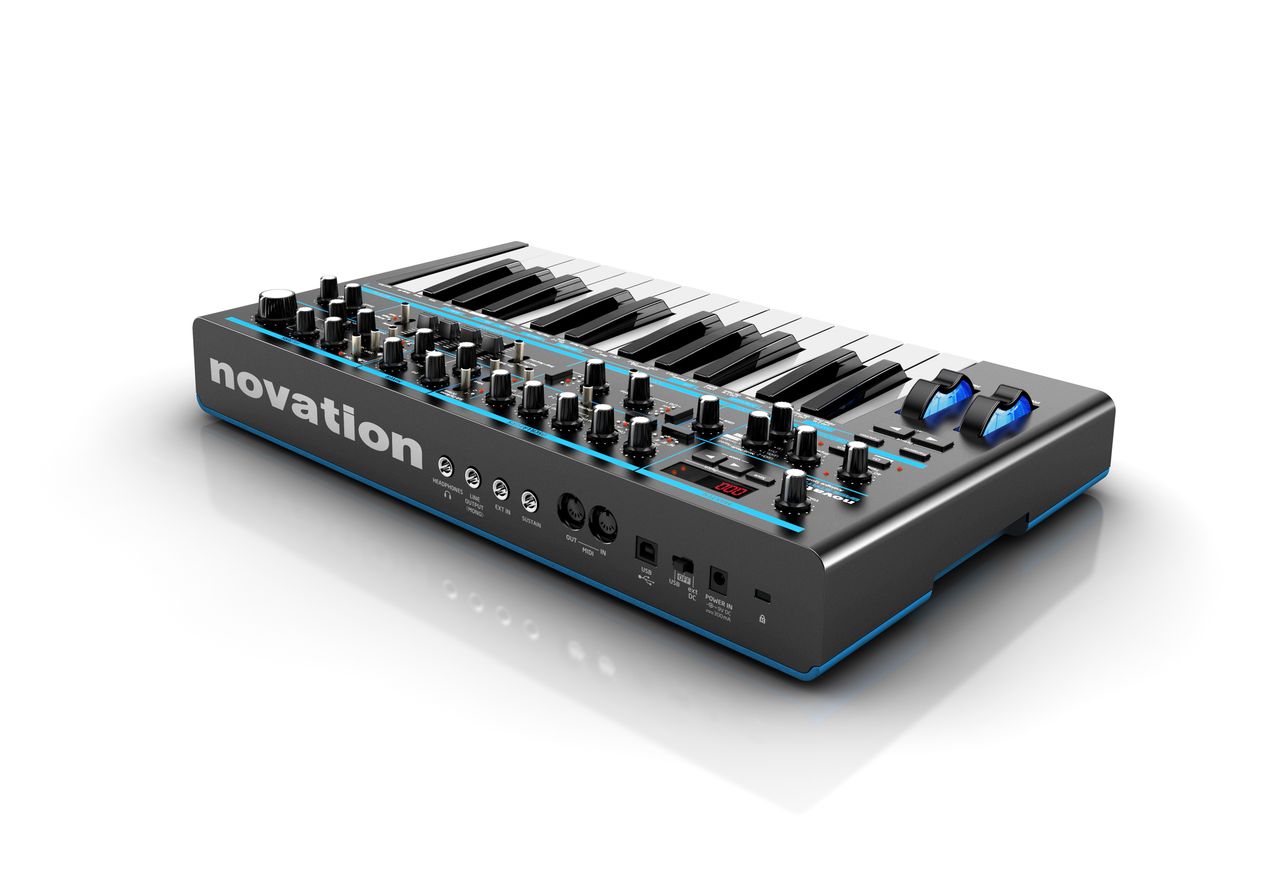 Oscillators: Bass Station II is built on three analogue oscillators and a noise generator. There are two fully independent oscillators plus a sub oscillator (which is the critical component in creating rich, analogue bass sounds). Oscillators One and Two are switchable between sine, sawtooth, square and variable pulse width, and Oscillator Three – the sub osc – can be set to one or two octaves below Oscillator One. It can be square, sine or narrow pulse width, delivering the characteristically ‘fat’ bass tone.

Filters: You can select between two discrete filters – ‘Acid’ or ‘Classic’ – each with a built in overdrive for pushing filter tones from dry, to warm, to nasty! The ‘Classic’ BassStation filter can be switched between low pass, high pass and band pass at 12 or 24dB slopes. The ‘Acid’ filter is based on a diode ladder filter design that delivers a characteristically 303-esque sound that is designed to squelch!

Effects: Bass Station II has two effects (not including the filter overdrive). Analogue distortion drives circuit components to add new frequencies to the sound. Bass Station II’s Distortion function can add gentle warmth, filthy granularity and anything in between. The second effect is ‘Osc Filter Mod’ which creates a distinctive FM-type sound by using Oscillator Two to modulate the filter frequency. This is very good at crunchy, sound-mulching effects that substantially fatten up bass and lead patches.

Modulation: There are two envelope generators and two low frequency oscillators (LFOs). The first envelope is an ADSR amp envelope and the second is a mod envelope that can be used to modulate filter frequency, oscillator pitch and osc pulse width. LFO One is dedicated to pitch modulation whereas LFO Two is used to modulate osc pulse width and filter frequency. Although it looks like there are four LFO waveforms, the ‘LFO Slew’ function can be used freely to sculpt LFOs into smoother wave-shapes.

Arpeggiator and Step Sequencer: Bass Station II’s Arpeggiator and Step Sequencer are killer performance and production tools. The Arp can be directed to run through 32 different rhythmic patterns in different directions with a switchable octave range. You can also engage the Step Sequencer. Up to four sequences can be played in – with legato and rests – and played back using any one of the 32 rhythmic patterns. As well as getting ideas down quickly and programming performance sequences, this is a brilliant way to preview patches whilst you are editing your Bass Station II Analogue Mono Synthesiser.