Former and current employees have expressed concerns of the brand’s treatment of BIPOC. 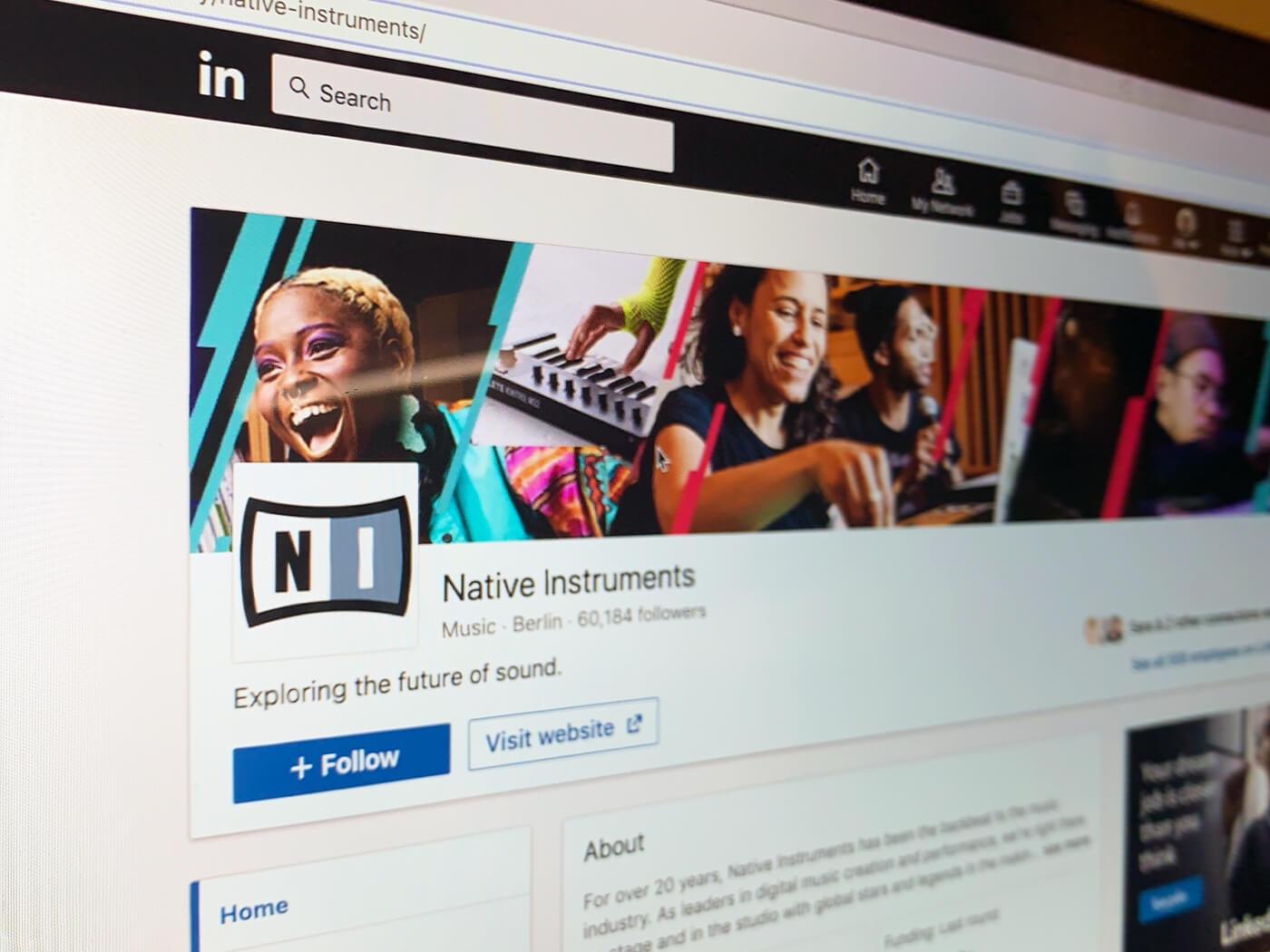 [Updated 22/06/20 – Native Instruments releases a new statement on the steps it is taking to improve diversity and inclusion. See the bottom of this article]

[Updated 18/06/20. Daniel Haver’s response to this story can be found at the bottom of the page.]

Software and hardware manufacturer, Native Instruments, has been criticised by its former and current employees over claims relating to its handling of alleged racism within the company.

The criticisms are based partly on the use of a sensitive term, during internal discussions around a 2017 commercial campaign featuring Portuguese producer, DJ N-Fox, to promote its Maschine devices. The brand’s CEO, Daniel Haver, has since released a statement addressing the issue saying racism goes directly against Native Instruments’ values and what they stand for. Native Instruments has also since donated $50,000 to NAACP Legal Defense and Educational Fund, Inc. and Equal Justice Initiative.

However, some artists, employees and customers are pressing for more concrete action, and for transparent and progressive change to be demonstrated by the company.

On 2 June 2020, NI participated in the Blackout Tuesday movement across social media, stating: “We stand in solidarity with everyone fighting against racism and social injustice in our society. We are listening, learning and looking into how we can best help to amplify voices against racism and be part of the force for change”.

This comment drew criticism on LinkedIn from a former QA Engineer at NI’s HQ, Jessy Halison. She wrote in a post “I just couldn’t stay silent when Native Instruments is trying to paint a portrait of a supportive brand”.

Jessy claimed: “We speak about the brand who released a campaign with the N-word, despite warning and calls in from their (black and brown female) employees. Who [said]… they would amend it not to be racist and conscious about the impact, but released it nevertheless without changing a single thing. Who didn’t protect said-employees from racist comments on discussion channels when the subject was brought up, who told them that they would have no issues advertising artists using other slur names. Who never apologized to them”.

“I should know, I was one of them. This whole thing was traumatic for me, and my friends. So let me “lol” to their external communication. They are not able to stand for their black and brown employees internally (despite really driving forces from some employees), and never committed to support the #diversityandinclusion initiatives we were working to put in place”.

“We don’t need and we don’t want your performative allyship. Apologize sincerely first, really do better. Acts speak more loudly than your empty words, and trust me, they speak volume!”

Among the supporters of Jessy’s response was Soraya Brouwer, Native Instruments’ former Senior Artist Relations Manager. Replying in the post’s comment section, Soraya stated: “During my time at Native, I worked with so many amazing people working on great projects and products, but it needs to be noted that the company’s external messaging doesn’t match the internal core values, and this LinkedIn messaging is simply not enough. I urge yourself and other senior staff at Native Instruments to stand in solidarity with your current and former Black employees, with the Black artists who represent your company image, with your Black customers who praise your range of products every day, and Black lives everywhere. Donating money is the first step but will these donations be recurring? What will you do to improve your workplace beyond the training? How can we be sure that you follow through and hold yourself accountable?”

CEO Daniel Haver published an article on LinkedIn titled Committing to do better, in reference to the claims against Native Instruments. The article read:

“First, Mate Galic (Chief Innovation Officer / President at Native Instruments) and I want to clearly express that racism goes directly against our values and what we stand for at Native Instruments. It’s our goal to create an inclusive workplace with equal treatment and opportunities for all – no matter their race, gender, age, physical ability, beliefs or sexual orientation.”

“A few days ago, several current and former employees of Native Instruments publicly raised concerning accounts of their experience working at NI, in particular relating to a marketing campaign that was deeply hurtful to them. We truly appreciate and welcome them sharing this openly and transparently.”

“At NI, we often feature and celebrate artists in our content and on our social media channels who are innovating music. Three years ago, we published a series of videos about a group of Black artists from Portugal doing unique work with our products that we wanted to highlight. One of the artists in the group adopts a stage name that includes an offensive term. At the time, some members of our team raised legitimate and thoughtful concerns about this, but nonetheless we made the decision to proceed with the campaign.”

“We believe strongly that artists have the right to choose how they express themselves. But our actions here not only ignored the feedback from our employees, but also the history and context of the pain these terms cause. We now understand that this was a mistake and that it made our own team — especially our BIPOC employees — feel unvalued, unseen and excluded. We have removed the content from all of our channels, and apologize to all of our employees (past and present), followers, and customers. As the leaders of the company, we take full responsibility to learn from our past mistakes.”

“We need to be active in the fight for equality and inclusion, and that starts with taking a hard look at our ways of working, our culture and our decision-making. At this moment, we are focussing on listening to and discussing actionable next steps with our team. We will remain transparent and share concrete next steps in due course about the actions we are taking to ensure an inclusive, respectful environment for our staff and broader community.”

In an article published by Mixmag, Jessy stated that “Last week, Native Instruments presented themselves as a company in support of the Black Lives Matter movement and said it stood in solidarity with those fighting against racism, whilst they have a history of shutting the voices of Black people addressing racism inside the company. I realized that I could not let them, again, capitalize on our silence and let them paint a situation different from the reality lived by Black and Brown employees at Native Instruments in the past. Thinking about all of these experiences is painful and triggering. I can never translate all the pain that it created into words.”

Jessy goes on to say, “I’ve read Daniel Haver’s statement. It does not encapsulate the gravity of the situation. We received a similar internal statement in 2017. The conversation was never about whether the artist was or wasn’t allowed to express themselves freely. It was whether Black people at the company were allowed to freely express themselves, and be recognized and respected by the company. It was about Black and Brown employees not being at the receiving end of racism in their workplace.”

“I have several questions that I shared that remain unanswered, and I urge Daniel Haver to publicly respond to all the questions asked in the LinkedIn thread. Most importantly, has Native Instruments ever asked itself why BIPOC generally don’t stick around at the company or settle down in senior positions?”

“Without our statement on LinkedIn and the active help from the Artist community across social media, this story would have gone unnoticed again. I hope Native Instruments will address our questions publicly, and share the actions they are putting in place to combat racism in their workplace to ensure a safer environment for everyone inside and outside the company.”

In the same Mixmag article, Soraya Brouwer also responded to the company’s statement, saying: “The statement by Daniel Haver is deeply disheartening as it doesn’t address any of the questions we asked him. We asked for accountability, and we got none. During the conversations we had with the company while we were there, it was made very clear that the Artist was never the problem. What we asked for was for Black people to be treated with human decency by Native Instruments.”

Soraya goes on to say, “It hurts to see the focus once again being shifted. To read such a noncommital statement after three years only adds further insult to injury. We need to see an outline of how the company exactly is willing to take responsibility and learn from its past mistakes, and we need them to share a timeframe and actionable steps with their current and former employees, customers and users to read to ensure a safer environment for current and future BIPOC working at their company.”

We reached out to Daniel Haver who says: “We’re currently focused on listening to and working with our team on the necessary steps to improve our culture, diversity and inclusion. We are committed to transparency on addressing these issues and will share more soon.”

“Everyone deserves an equal opportunity to thrive in the music technology industry”, the brand says. “But right now this isn’t happening. And as a company we know we haven’t done enough to address the issues of systemic racism, bias, and inequality in the sector or within our own walls.”

Native Instruments will be “bringing in independent experts with an intersectional outlook to help [the company] better understand the state of diversity and inclusion at NI”. It will also be providing training to its entire workforce, starting with mandatory unconscious bias training and expanding its Diversity Resources Hub.

The brand says it is also “committing to a long-term, intersectional diversity and inclusion program that includes anti-racism, anti-harassment, and anti-sexism training”. A budget of €100k has been made available to provide financial support in rethinking its processes and structures to “ensure that diversity and inclusion are embedded in [the company’s] daily work”.

Native Instruments is also committing to creating a more diverse team and leadership, making use of diversity-led recruitment agencies, coaching for hiring managers and interview participants to ensure a bias-free recruitment process and a reassessment of the language used in its job descriptions.

A new dedicated tool will be put in place to make reporting discriminatory incidents safer and more effective with anonymous reporting and bias tracking. “We will also implement processes for reviewing marketing campaigns and product releases to ensure there is space for criticism and that action is taken when flags are raised”, the post continues.

Finally, the company has stated it will devise annual budgets for initiatives within the wider community that tackle racism and inequality. It will also “define a further allocation of software and hardware to be made available for charities and after-school programs”.

You can read the full statement here.

This is a developing story, and we will bring you further updates.

For ways to help and donate to the Black Lives Matter movement head to blacklivesmatters.carrd.co