The 9.1 update for Ableton Live has now been officially released after being trialled in beta. The updated version now includes complete support for two windows on dual monitors Live 9.1 also includes a brand new melodic step sequencer, which allows users to enter notes manually, or play them in, then edit each note in […] 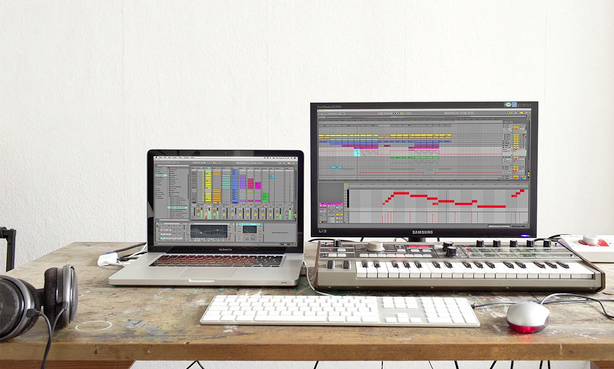 The 9.1 update for Ableton Live has now been officially released after being trialled in beta. The updated version now includes complete support for two windows on dual monitors

Live 9.1 also includes a brand new melodic step sequencer, which allows users to enter notes manually, or play them in, then edit each note in the sequence accurately – or via Push – You can also now edit automation with ease.

Improvements and feature changes
• Added dual monitor support.
• When exporting audio, sample-rate conversion is now done using the high-quality SoX Resampler Library, resulting in higher quality exports when rendering to a lower Hsample rate.
• Live now uses multiple CPU cores when exporting audio and the normalisation process is faster than before.
• When exporting audio files from Live with the option “Create Analysis File” enabled, Live will now save warp markers with the .asd file, so that information about the original tempo and tempo changes are correctly reused when re-importing the audio file into Live later on.
• The ‘Export Audio / Video’ export dialog has been improved. - It shows the same options whether launched from Session or Arrangement View. - Some of the export settings have been regrouped to provide a better overview. - “All Tracks” has been renamed to “Individual Tracks” in the “Rendered Track” chooser. - The export dialog now shows information about the source and target sample rate.
• The “Open Recent Sets” menu now has a “Clear List” and “Remove Unavailable Sets” option.
• The menu item “Close Live Set” has been renamed to “Close Window”. It will now close any secondary window that is open. If no secondary window is open, it does nothing.
• The audio buffer size is now restricted to power-of-two values. Windows users should note that not all ASIO drivers support this and may still allow to use non power-of-two values. This can lead to a higher CPU load and higher latencies. Ableton recommends to always use power-of-two buffer sizes, i.e. 64, 128, 256, 512,… samples.
• Optimised default presets for Auto Filter, EQ Eight, Saturator, Tension, Simpler, Sampler, Analog, Operator, Electric.|
• Added 10 new Simpler presets to the Core Library.
• Updated manuals, lessons, info texts and translations.
• Minor improvements for usage data reporting.
• When creating a new track by dragging an instrument to the clip/device drop area, Live would keep the last selected clip stand-by-selected. Now it moves the selection to the clip slot that matches the Session View’s crosshair.

Bugfixes
• The mouse and keyboard could sometimes become unresponsive after zooming, scrolling or tweaking parameters on OS X 10.9 “Mavericks”.
• Automatic updates could break an installation if the update process was interrupted.
• Automatic updates would not work when running Live in ReWire slave mode. Therefore, automatic updates are now turned off in this case.
• Live would not check if there’s enough free disk space available before applying an automatic update.
• Fixed a problem which could lead to a memory leak in the Ableton Index and Web Connector processes.
• Loading Live Sets and presets could take longer than necessary if the file contains references to missing samples.
• The metronome timing would be incorrect after reloading a Live Set with a different time signature than 4/4.
• Decreasing and then increasing the audio buffer size in the Audio preferences tab could cause permanent crackling on Mac OS X 10.7 or higher.
• Two crossfaded clips running in ‘Complex’ or ‘Complex Pro’ warp mode could cause crackles and dropouts if the samples were time-stretched.
• Negative sample offset modulation of the Beats warp mode would not work correctly and could lead to disk overloads.
• The Sampler device occasionally produced a red ‘D’ (harddisk warning) if the sample is played very fast (high note, low base note). The fix reduces the likelihood of such disk dropout warnings.
• Audio effects or racks with a high overall latency would not be rendered correctly. The beginning of the rendered file could contain a short period of the dry signal.
• Fixed a bug that could cause parts of a waveform to disappear when dragging a warp marker.
• Live would select clips slots when clicking and dragging in the empty area below the clips slots.
• Key presses were not correctly forwarded to Live from VST plug-in windows or the video window (PC only).
• Fixed a CPU performance problem which could occur with certain VST plug-ins.
• Fixed a bug which could prevent certain AU plug-in windows from closing in the 64-bit version.
• Live could crash when recording automation for VST or AU plug-ins on return tracks.
• Looping automation in Session View clips was not correctly disabled when touching an automated parameter with the mouse.
• MIDI sustain messages would be occasionally ignored when recording over an existing MIDI clip in the Arrangement View.
• Irregular audio output values from Max for Live devices (i.e. “Not a Number” signals) would break downstream signal processing in Live. Such signals are now automatically replaced with silence.
• Presets containing Max for Live devices from the User Library would sometimes not be shown in the browser’s “Max for Live” label.
• Max for Live API: The “length” property of a looped clip would reflect the distance from the clip start to clip end marker and not the length of the loop, as specified in the API documentation.
• Max for Live API: Live could return a “bad number” error message when observing the “clip_trigger_quantization” property.
• Live could crash when remapping a Max for Live device after using undo.
• Live could crash when adding a drum rack from the “Autobeat” pack.
• Mapping a MIDI message from a ReWire master application to one of Live’s parameters could crash the ReWire host and freeze Live.
• Live could crash when pressing CMD/CTRL + M or CMD/CTRL + K during startup.
• Kit-Core 808 Kick, Toms and Congas could produce unwanted clicks when tweaking the “Low/High Cut” macros.
• The “Shaperello Pad” preset could produce unwanted clicks when tweaking the “Erosion” macro.
• Removed redundant choke group in Kit-SessionDry.
• Fixed wrong notes in Scale preset “Minor Pentatonic Scale”.
• MIDI data routed from a track output to the Launchpad would be sent on the wrong MIDI channel.
• Fixed LED-update for Track On/Off button on Reloop KeyFadr/KeyPad controllers.

Changes for Push
• Updated firmware to version 1.13. Live will show a dialog box on startup if a new Push firmware is available. Detailed update instructions and a changelog are available in a separate Knowledge Base article.
• Added a Melodic Step Sequencer mode.
• You can now add parameter automation to the selected step in a step sequencer.
• Push’s display now indicates automated parameters, as well as overridden automation.
• Step Sequencer mode is now also available for Drum Racks that are nested inside Instrument Racks.
• Less force is required to set steps in the step sequencers and loops in the loop selector.
• Improved behavior and color scheme for the loop selector in step sequencers.
• Auto-follow mode is now disabled when creating new clips by setting the first step in the step sequencer.
• When navigating between different clips, Push now remembers which “page” of a step sequencer was selected in each clip and returns to it when reselecting a clip.
• When holding down a step in a step sequencer, you can edit the length of MIDI notes in steps (coarse) and in percent (fine). The length of the edited note is also reflected on the button matrix.
• You can delete all notes on the same pitch within the current loop by holding down the delete button and then pressing the respective pad. This works in Note mode and also for playable drum pads.
• The “Fixed Length” setting is now respected when creating a new clip by adding steps to an (empty) step sequencer.
• When enabling ‘Scales’ mode, you can use the first encoder to scroll through the available scales.
• Push’s display now shows a short message when using the Undo / Redo button.
• The second footswitch input now allows to control clip recording:  A single tap triggers Push’s record button. A double-tap triggers Push’s “New” button.
• Clips inside group tracks would not be indicated on the button grid when using Session mode.
• When creating a new clip while Push is in Session mode, any update to that clip’s color was not reflected on Push.
• The playhead could sometimes skip the first step when auto-follow was enabled.
• The playhead would sometimes be stuck for a short time or skip beats when changing the step sequencer’s resolution.
• If a clip’s start marker was set to a negative time, e.g. -2.1.1, it wasn’t possible to move the loop length into a negative time range.
• Audio or MIDI tracks (with their MIDI input set to something other than Push) would be disarmed when selecting Tracks via Push, regardless of the Exclusive Arm settings.
• Live could crash when overdubbing automation on a Return track using Push.
• Live could crash when remapping a Max for Live device whilst touching / releasing an encoder on Push.