Hot on the heels of the 17XS MkII compressor comes Lindell’s new take on the mic pre/EQ combo. John Pickford checks it out.      Details Price £779 Contact via website Web www.scvdistribution.co.uk Amazon.co.uk Widgets A while ago we reviewed Lindell’s excellent 17XS MkII compressor, a supercharged rethink of the legendary Urei 1176 design. Here we turn […] 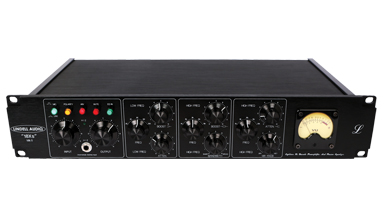 Hot on the heels of the 17XS MkII compressor comes Lindell’s new take on the mic pre/EQ combo. John Pickford checks it out.

A while ago we reviewed Lindell’s excellent 17XS MkII compressor, a supercharged rethink of the legendary Urei 1176 design. Here we turn our attention to Lindell’s latest top-of-the-range single-channel mic pre/EQ. The 18XS MkII is a discrete, transformer-coupled Class-A mic preamplifier that also accepts line-level sources as well as featuring a high-impedance DI input.

And just as the 17XS pays homage to an audio design classic, this unit features an EQ section based on what must be the most revered equalizer of them all: the Pultec EQP-1A. That design is now over 60 years old and was originally valve-driven; however, while this model faithfully replicates the Pultec’s EQ curves, it employs solid-state technology.

On the front panel are two high-quality Alps rotary pot controls for input and output on the mic preamp. Indeed, Tobias informed us that specially selected components have been used throughout, including hand-wound exclusive transformers, Wima caps and Alpha switches, housed in a “one-of-a-kind” 10mm aluminium chassis.

Along with the aforementioned pots, the preamp section features a row of coloured, illuminated push-buttons to engage mic/line inputs, invert polarity (phase), 48v phantom power, mute and EQ in; the DI jack input is also located on this section of the unit. The equalizer boasts similar user controls to those normally found on Pultec-style EQs but with several additional features. This means that the low end offers step-switched EQ points at 20Hz, 30Hz, 60Hz and 100Hz as per the original design, while adding a fifth option at 200Hz. As with all equalizers based on the EQP-1A, these low-end shelves can be simultaneously boosted and attenuated to create some useful curves.

Experimentation is key here, but try a 30Hz boost and cut on a kick drum to add a bit of low-end heft and reduce boxiness. The high-end boost offers 15dB of peaking EQ, with frequencies centred on 4kHz, 6kHz, 8kHz, 10kHz and 16kHz; a Bandwidth control determines the width of the EQ curve. High-frequency attenuation incorporates the original Pultec options of 5kHz, 10kHz and 20kHz while adding 8kHz and 15kHz for good measure.

The most interesting feature of the EQ section is the wet/dry Mix control, which allows the EQ’ed signal to be blended with the unprocessed sound. This feature can be found on Lindell’s 17XS compressor to perform parallel compression effects, but a parallel EQ function is totally unique to this model and, in practice, can produce some really interesting tones.

Sounds Right
Plugging in a variety of microphones, we noted immediately the unit’s impressively low noise floor, even when cranking up the input gain with our insensitive Coles 4038 ribbon mics. Tonally, the preamp slightly emphasised upper-mid/low-treble frequencies while remaining full-bodied and extended at both frequency extremes. A high-pass filter would have been nice, but with a powerful onboard equalizer this didn’t seem too problematic.

The equalizer itself is superb, sounding exactly as a Pultec-styled device should. Although it’s solid-state throughout, it displayed a very convincing valve-like sound that was quite beguiling. Even when boosting and cutting dramatically, audio remained focused and musical. The wet/dry Mix function seemed like a bit of a novelty at first but we were soon charmed by its tone-shaping abilities, which added an extra dimension to the classic sound.

Build-wise, the unit is top-class, looking very smart with its black brushed-aluminium case and retro-style VU meter. And, like its 17XS stablemate, it comes with a pair of white gloves to avoid sticky fingerprints!

Lindell’s 18XS MkII offers a lot of audio bang-for-buck for anyone in the market for a standalone mic/line preamp with EQ. The DI input is very handy for tracking keyboards, bass and guitars, while the mic preamp, with 65dB of gain available, will do justice to all types of microphone, from inexpensive dynamics to esoteric condensers and ribbons. Best of all, though, is the lovely EQ, which, even without the mic pre, would be worth the price of admission 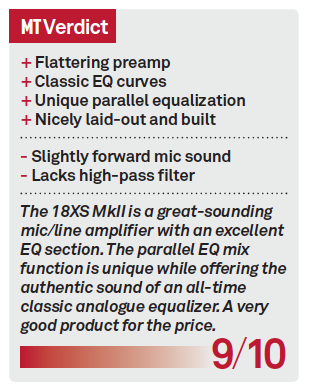 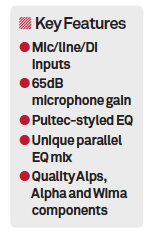