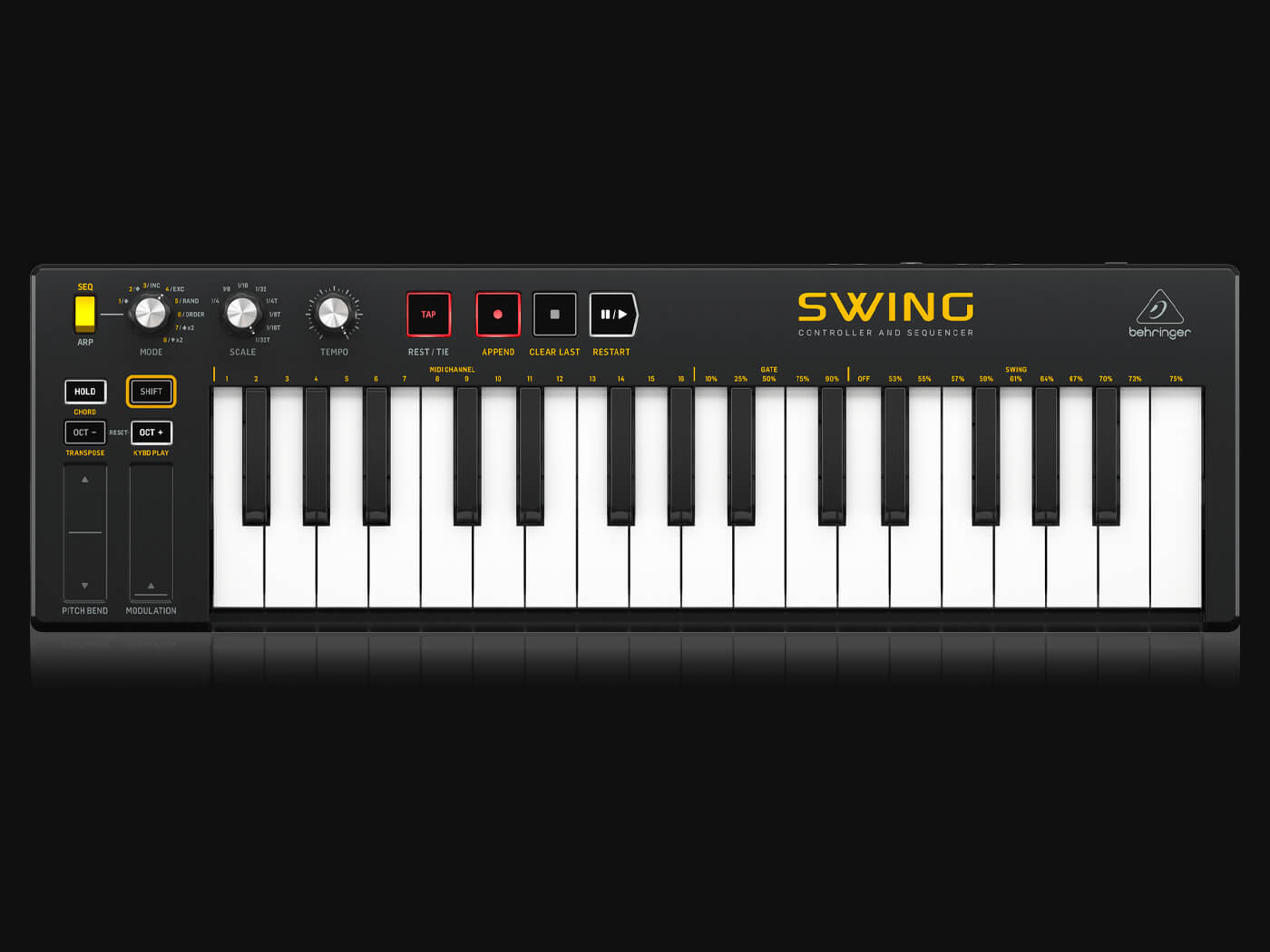 Behringer has faced significant backlash for its latest MIDI keyboard controller; online critics have alleged that the Behringer Swing – announced on 22 November – is a clone of Arturia’s Keystep.

The 32-key controller offers the same two pitch and modulation touch-strips, onboard arpeggiator and 64-step sequencer. Not only are the Swing’s buttons shaped similarly to the Keystep’s – the majority of them are even labelled the same.

Music gear news outlets, forum users and even Behringer’s own followers on Facebook have criticised the Swing.

“How is this new?” one Facebook user commented. “At the very least you could have made it look a little less like a Keystep?”

Synth Anatomy and Gear News have called the Swing a “blatant 1-to-1 copy” of the Arturia Keystep. The latter opined “[launching a copy] of a current competitor’s product just seems downright rude.”

Synth Anatomy added: “It’s Behringer who blindly copied the entire design and functionalities of the Arturia Keystep without respect for the original designers.”

Arturia’s CEO and co-founder, Frédéric Brun, took to the Simply Synthesizers Facebook Group to make a statement regarding SWING. “This product is in no way the result of a partnership between Arturia and Behringer”, the post reads. “We have worked hard to create the _Step range. We have invested time and money to imagine, specify, develop, test and market the KeyStep. Along with our distributors, we have been evangelizing this product, placing it in stores, explaining it, servicing it.”

“Of course we accept competition, and would absolutely understand that Berhinger give their own interpretation of a small and smart controller that would also be a sequencer. Others do, we have no problem with that and see good for the customer, as well as for the industry, in fair competition”.

He closes the post with: “But this is not fair competition here. Coco Chanel once said: ‘If you want to be original, be ready to be copied’. So we could in a way consider the Swing as a compliment. We could. In any case, thank you, everyone who came out and supported us these past 36 hours! It’s been very helpful, very much appreciated”.

Using the Music Tribe forums as a platform, Behringer responded to claims from its critics and Arturia stating: “Since various magazines and Arturia have publicly called us out over the launch of our Swing MIDI Controller, we would like to respond and share some facts around the principles of competition and clear up some misconceptions.”

“Competition is a highly effective tool to drive innovation by empowering Customers to make their best choices and force manufacturers to constantly reinvent themselves”, the post continues. “The law was specifically designed to encourage everyone to fiercely compete, even when it means over the same functionality and design, provided intellectual property such as utility (functional) and design patents as well as trademarks etc. are respected”

Likening the scenario to the guitar world, Behringer said: “How many Fender Stratocaster or Gibson Les Paul clones are out there in the guitar world and how many SM58 clones are available? How many cars or mobile phones look alike?”

“We are spending large amounts of resources on innovation, which is reflected in products such as X32, XR18, Flow, DDM4000, etc. This made us the global market leader for analogue and digital mixers and over the years we have built an extensive patent portfolio.”

“However, we also clearly choose to follow successful brands and products, while adding more features and/or competing on price. Much of our innovation is invisible to the Customer”

“It is our Purpose and Mission to empower Customers who don’t have deep pockets and provide them with the best possible equipment at fair prices. We do understand that we are a fierce competitor and at times controversial as we’re relentlessly push the envelope.”

Back in September, Behringer announced the Bigfoot microphone, a USB condenser with a very similar spec sheet and name to the world’s number-one USB microphone, Blue Microphones’ Yeti.

However, criticism has been mostly subdued on Behringer’s copycat products taking after out-of-production vintage gear. On Friday (20 November) the brand opened pre-orders for its MonoPoly, a $699 take on the revered Korg Mono/Poly.

The Behringer Swing lists at $99. Learn more at Behringer.com