Editors Keys have just launched the world’s first wireless keyboard designed specifically for use with Logic Pro X. The new shortcut keyboard aims to help users access their shortcuts quicker and more efficiently. The keyboard features over 150 shortcuts and is designed using an official Apple keyboard as it’s basis. Read on for the full […] 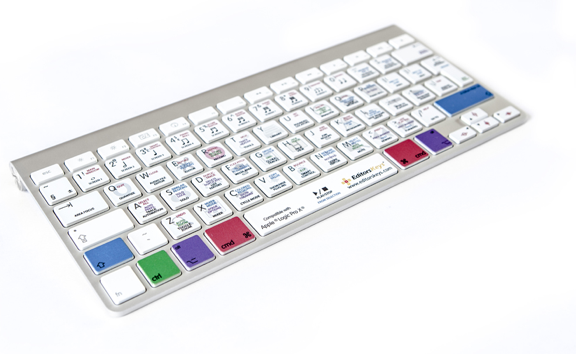 The keyboard features over 150 shortcuts and is designed using an official Apple keyboard as it’s basis. Read on for the full press release

Editors Keys is today launching its new wireless shortcut keyboard, designed for Apple’s Logic Pro X software, which helps you edit faster than ever by offering you all of the major shortcuts at once.

The new keyboard for Logic Pro X features over 150 shortcuts and a new manufacturing technique, which allows extra shortcut icons to appear below the text on the keyboard. This greatly improves the design of the product.

The new keyboard is manufactured using an official Apple keyboard, so fits in perfectly with your current Mac setup.

Editors Keys worked with the Logic Pro X Community to create a new style of Logic Keyboard, which not only makes it faster to edit within Logic, it also makes it easier to understand.

“It’s great working with the audio community to create a new product. You encounter issues from a ‘real world editor’ perspective that you just can’t obtain from the office. The feedback and testing has been priceless.” Says Mark Brown – Company Director of EditorsKeys.com

The keyboard is available today for £109.99 from this link:
http://www.editorskeys.com/products/audio-editing-keyboards/logic-pro-x-wireless-keyboard/