After getting a teasing glance (and listen!) of the Sequential Prophet X, Dave Smith Instruments has formally announced the new hybrid synth along with all its features. We’ll pass you over to them for the full story… Dave Smith Instruments today announced the Sequential Prophet X, a new, bi-timbral, 8-voice-stereo (16-voice mono) synthesizer that combines […]

After getting a teasing glance (and listen!) of the Sequential Prophet X, Dave Smith Instruments has formally announced the new hybrid synth along with all its features. We’ll pass you over to them for the full story…

Dave Smith commented: “The Prophet X is a powerful evolution of the Prophet series. Musicians have been asking for samples through real analog flters for a long time. We’ve given them not only that, but also all of the synthesis capabilites and awesome sound you’d expect from a Prophet.”

For sample content, Dave Smith turned to acclaimed sound developers 8Dio, known for pioneering “deep sampling,” a detailed approach to sampling that aims to capture all of the nuances and idiosyncracies of a particular sound or instrument. 8Dio co-founder Troels Folmann put it this way: “We’re known for going anywhere and everywhere with sounds. We embrace all sounds as music and feel that if you can capture the musical soul of a sound, you can make it into an instrument. The Prophet X gives musicians a very immediate and responsive way to access this expressiveness.” 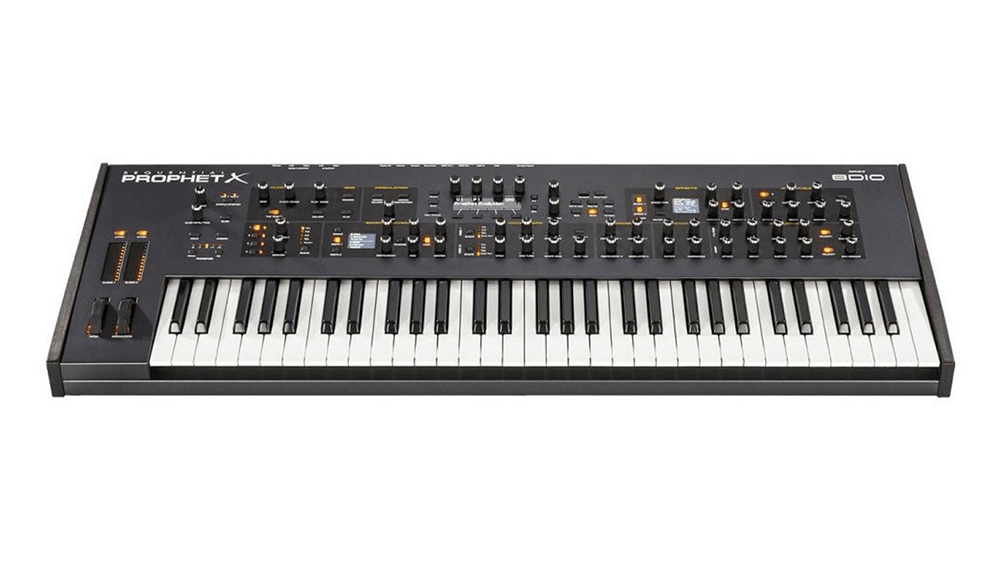 The 150 GB sample library in the Prophet X includes numerous acoustic and electronic instruments as well as an extensive collection of ambient and cinematic effects. Users can shape the samples through loop manipulation, sample stretching, and the synthesizer’s many sound-sculpting functions which include 4 envelope generators, 4 LFOs, a deep modulation matrix, and other tools. The Prophet X also provides 50 gigabytes of internal storage for importing additional samples. Several sample libraries will be available from 8Dio at launch. Support for user-created sample content is planned for December, 2018.

A dual-effects engine provides multiple reverbs, two delays (standard and BBD), a chorus, flanger, phase shifter, rotating speaker, high-pass filter, and distortion. In stacked or split voice mode, you can apply two different effects to each layer. Effects parameters can be modulated through the mod matrix as can the samples themselves. A polyphonic step sequencer allows up to 64 steps and up to 6 notes per step, per layer. The Prophet X features a premium-quality, five-octave, semi-weighted keyboard with velocity and channel aftertouch, an integrated power supply, USB support, and three OLED displays.

Dave Smith summed up the new instrument: “Composers will love the Prophet X for soundtracks and synth geeks will love it for its sound mangling potential. But it’s really for everyone because it covers such a wide range of sounds. The new analog filter design we’re using is not only fantastic for synth sounds, but also does something special for the samples.” Added 8Dio co-founder Tawnia Knox: “The Prophet X has almost infinite possibilites. But more importantly, it has a soul. It’s alive. You can touch your sounds in a different way than you ever could.”

Pricing and Availability:
The Sequential Prophet X will be available in the second quarter of 2018 with a projected MAP of $3,999. For further information head here.