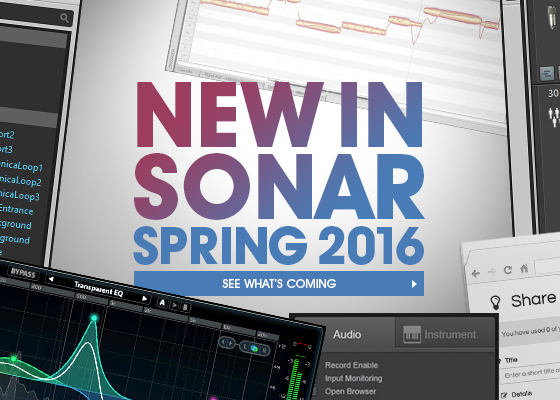 One year ago today, Cakewalk shook up the industry with the Rolling Upgrades program—a concept since adopted by Microsoft for Windows. Discarding version numbers and annual upgrades, Cakewalk has updated SONAR every month with new features, enhancements, fixes, exclusive content, and speed optimizations as soon as they were tested and ready for release. Like always, customers could still purchase a perpetual license, but received even more value thanks to Rolling Updates.

One year later, the results are in: over 350 fixes and enhancements, major proven speed optimizations, integrated features like vocal synchronization and drum replacement, modern tools like a Virtual Touch Controller, Universal Routing Technology including Patch Points (developed in response to community requests), new plug-ins like the Rapture Session virtual instrument, and exclusive content from industry experts like Craig Anderton.

And Cakewalk is just getting started, with today’s announcement of new features for Spring 2016 (http://www.cakewalk.com/Products/SONAR/Rolling-Updates#Coming-In-2016 ). A new “Add Track” menu fly-out simplifies adding audio or instrument tracks with easy access to track presets, instruments, settings, and routing information. The new “Help Module” flattens the learning curve, offering instant help inside the program with useful tips, techniques, and shortcuts. A modern browser-based Library with a newly designed tagging system and task-driven browsing—locates instruments, loops, samples, and other media with the click of a mouse—or the touch of a screen.

SONAR greatly expands “look and feel” customization possibilities with UI themes, new skins, and personalization tools. Mastering is getting a facelift with refreshes to the LP64 linear phase Multiband Compressor and EQ interfaces, along with improved preset handling and real-time FFT analysis. Overloud’s TH3 Guitar Amp (Cakewalk Edition) and Melodyne 4 Essential (with ARA integration) update the amp simulation and vocal editing capabilities, and as in past updates, Cakewalk will continue tweaking the existing code base of the program for faster, smoother operation.

Finally, a new “Feedback Portal” provides direct interaction between Cakewalk and SONAR users, who can share opinions about new and potential features, and vote ideas up or down. And beyond Spring 2016, additional powerful, value-packed monthly updates will follow throughout the year. Visit the Rolling Updates page for official release dates on new features along with more information, screenshots, and a list of past updates (http://www.cakewalk.com/Products/SONAR/Rolling-Updates#start) .

Cakewalk also announces new renewal pricing for the Rolling Updates Membership program. First-time SONAR buyers automatically receive one year of Rolling Updates. Renewing a yearly membership costs $49 for SONAR Artist, $99 for SONAR Professional, and $149 for SONAR Platinum. For a limited time through March 31st, 2016, existing customers can buy a SONAR Platinum renewal for $99—33% off the regular price. Best of all, this is not a “subscription” model, everything you receive during a Rolling Update “Membership” renewal remains activated and yours to keep, even after the year is up.

Or, buy SONAR via monthly payment installments that start as low as $9.99. After 12 months of payments, you fully own SONAR and everything you received throughout the year. Visit the SONAR Renewal page for more information on pricing www.cakewalk.com.

Availability
Many new features will be available during Spring 2016 to current SONAR Artist, Professional and Platinum customers with a current Rolling Updates Membership, while other pre-announced features will be available in future updates. All three SONAR versions are available globally through music and sound retailers, Valve’s Steam Store, and the Cakewalk Store. Please visit www.cakewalk.com for complete version details and localized pricing/availability options from our distribution partners.