A grim genesis resulted in one of the most acclaimed albums of the 90s. Over 20 years since its release Trent Reznor’s harrowing opus The Downward Spiral continues to sonically enthral. Andy Price takes you where you (might not) want to go… Produced By: Trent Reznor, Mark ‘Flood’ Ellis at Le Pig Studio, California Mixed […] 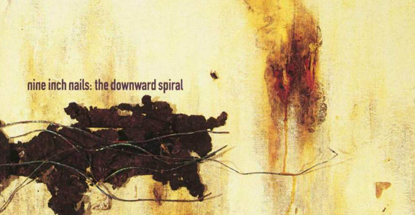 A grim genesis resulted in one of the most acclaimed albums of the 90s. Over 20 years since its release Trent Reznor’s harrowing opus The Downward Spiral continues to sonically enthral. Andy Price takes you where you (might not) want to go… 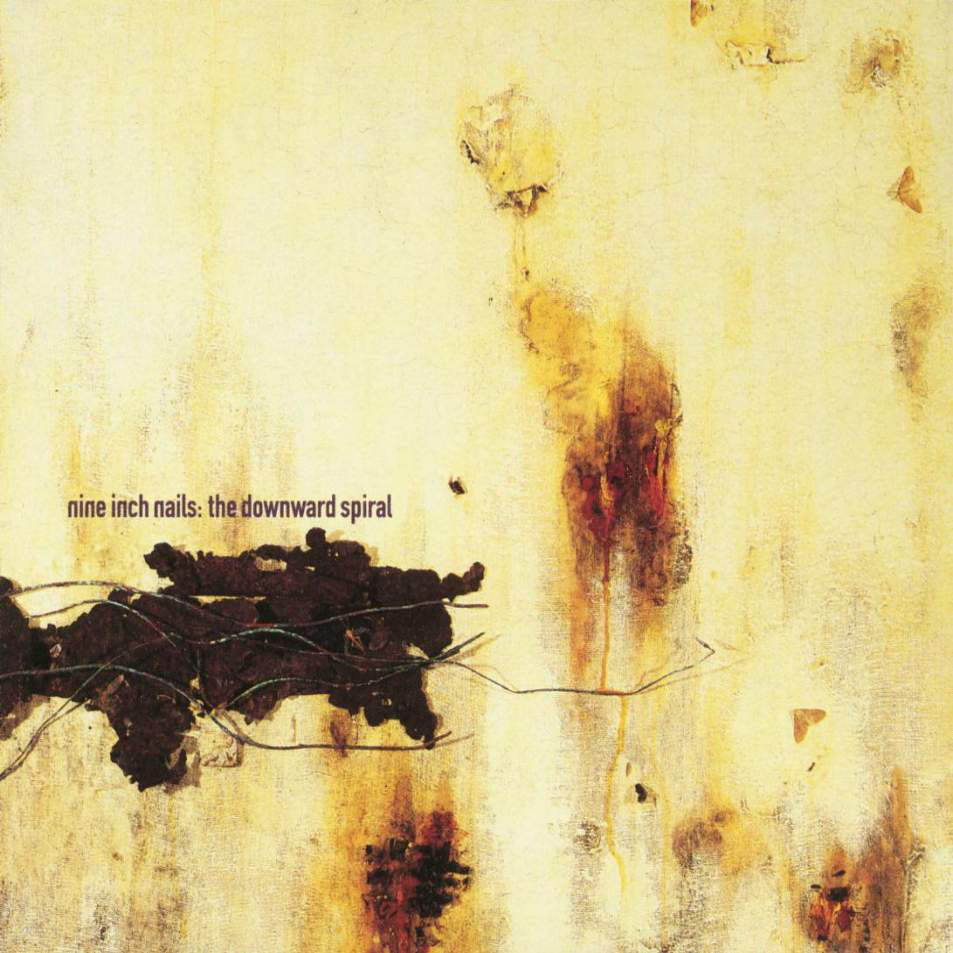 What initially began as a solo side project for the young and ambitious Pennsylvannia-based musician Trent Reznor, Nine Inch Nails eventually overtook Reznor’s entire musical trajectory, and the subsequent sound and mood of the increasingly popular industrial rock genre in the 90s.

Debut album Pretty Hate Machine was an often abrasive collection of material that Reznor had been working on for years prior to the recording, however through the making of that promising debut, Reznor became close to several iconic producers including Mark ‘Flood’ Ellis, whose credits had included producing the mighty U2 album canon and the dark textured depths of Depeche Mode’s Violator among many others.

Reznor and Flood cemented their relationship by collaborating once again on the quietly released EP Broken. During the making of this EP, Reznor became frustrated by the demands of his record label TVT, who questioned the increasingly experimental direction Nine Inch Nails had begun to take.

So, alongside his manager John Malm, Reznor launched Nothing Records, initially as a way to get out of the unworkable contract with TVT and instantly began to work closely with Flood on his new label’s first major release and the album that would rocket Nine Inch Nails into the consciousness of a generation: The Downward Spiral.

At this time Reznor was heavily influenced by David Bowie’s Low – Reznor subsequently told Kerrang! Magazine that when he picked up the record he “instantly fell for it, I related to it on a songwriting level, a mood level and on a song-structure level… I like working within the framework of accessibility, and songs of course, but I also like things that are more experimental and instrumental.”

One of Reznor’s main ambitions with The Downward Spiral was to create an album that, in his own words, “went in ten different directions, but was all united somehow”. Reznor’s DIY attitude to album creation extended to studio use as well. Rather than booking time at a pro studio to record The Downward Spiral, Reznor instead decided to build his own – the uniquely (and grimly) named Le Pig.

Famously Le Pig was situated in the same house where, decades previously, Charles Manson and his ‘family’ had murdered actress Sharon Tate and daubed the word ‘pig’ on the wall in blood. Matters of taste aside, Le Pig was impressively kitted out with a variety of tech: from modular synths including the Oberheim OBMx and classic ARP Odyssey, to Akai drum programmers, Studer tape machines, a Pro Tools equipped Mac and a large Amek Mozart console that included several Rupert Neve Modules.

Part of the rhythm setup (aside from the live skills of touring drummer Chris Vrenna) included a Roland R-70 drum machine and a raft of classic samplers, including Kurzweil K200 and the Akai S1100.

Much of Reznor’s songwriting at this point was driven by an experimental edge. Material such as Ruiner was a strange combination of synth chords and drum loops, with Reznor himself playing the central guitar solo. This solo was played through a Zoom Guitar Effects pedal in an attempt to emulate a Pink Floyd type sound, but instead he ended up with something very different, and he decided to expand this initial experimental idea into a full track on the record.

The first track on The Downward Spiral begins with a strange repetitive thudding sound – a sample from George Lucas’s dystopian film THX 1138: it’s the noise of a prison guard beating a submissive prisoner. It then explodes into a fuzzy, cacophonous maelstrom of sound, with a creepily withdrawn lead vocal line from Reznor before the driving, stomping chorus of Mr Self Destruct unveils the first example of the Reznor growl on the record.

This track also showcases the unique guitar talents of Adrian Belew, the former King Crimson, Paul Simon and David Bowie axe-slinger, who Reznor would describe as, “the most awesome musician in the world”. Belew was asked to contribute in a rather unique fashion to Mr Self Destruct among other tracks on the record.

In an interview with Guitar World back in the 90s, Reznor recalled this process. “I said to Adrian: ‘play whatever you want’. Then he said, ‘what key is it in?’ – and I had to say, ‘Uh, I don’t remember, it’s probably in E.” Reznor said that he’d ask Belew to “concentrate on a rhythmic part, and then another time, think in terms of the countermelody. He pulled out a bunch of great sounds that he never gets to use.”

Belew would also apply his free-riffing abilities to several other tracks on the album, including The Becoming on which he played through a ring modulator, because… well, why not?!

The record continues with Piggy, originally inspired by a short poem that Reznor had written. The arrangement keeps a steady and restrained 65bpm with a simple electric bass-led sound and breathy vocal performance, standing in stark contrast to the aggressive power of the opener. This track also sees the introduction of a short musical motif that’s peppered throughout The Downward Spiral, played on the organ towards the end of the song.

Heresy then roars into life with a synth bass and stomping drum loops. A nihilistic lyrical attack on organised religion, Heresy clearly signposts the direction of one of Reznor’s up and coming protégés – one Marilyn Manson.

The utterly bizarre time signature that makes the standout track March Of The Pigs so memorable actually alternates 7/8 time in the verse with the chorus-type section flipping to a standard 4/4 time. The simple piano post-chorus is also in a very restrained 4/4 time – although the bpm is 269. This erratic arrangement underlines one of Reznor’s main conceptual themes on the album: that of a man shedding his identity, in an often violent and self-destructive manner. He’d express this through both his pained lyrics and though the kaleidoscopic use of sound and sudden rhythmic shifts.

Using a heavily treated kick drum-sample from Iggy Pop’s Nightclubbing to propel it along, the infectious, synth heavy Closer would become the defining song of the record, placed on an unending heavy rotation on the setlist of rock club DJs around the world. The shockingly direct refrain, “I want to f**k you like an animal” had an undeniable catchiness, referenced frequently in popular culture and became Nine Inch Nails fan-mantra.

Reznor recorded the vocals for Closer with a Shure Beta 58A while standing right next to the console and directly into his Pro Tools rig. This direct approach bypassed Reznor’s then-standard route of recording vocals on to a Studer A800 MK 3 Multitrack tape machine, giving him a much more fluid approach to recording vocals, as and when required. He used this direct-to-computer approach on the majority of tracks on the record before mixing down to an arrangement to tape. The peculiar vocal effects at the end were generated by running them through an Eventide H3500.

The track I Do Not Want This opens with heavily treated loops, which then become pure and untreated as the song leaps into its chorus. Many of the loops used on The Downward Spiral’s tracks were assembled using recordings of live drummers including Chris Vrenna and Stephen Perkins, which were then re-assembled and occasionally treated by adding synth and Pro Tools manipulation. A way of working which Reznor would refer to as “very creative”.

You can have it all…

After a range of colourful, occasionally abrasive but still aurally fascinating compositions, The Downward Spiral reaches the end of its conceptual arc with the title track. A beautiful piece which resurrects the melody used earlier in both Piggy and Closer, however this time it’s in the key of E Major. The arrangement is bolstered by use of heavy synthesisers and loud guitar before the rhythm section neatly segues into the album’s epilogue…

Much has been written about the reflective and beautiful Hurt – especially in the light of its new lease of life following the success of the heartbreaking 2002 cover by country legend Johnny Cash.

The original version has a similar air of melancholy, although the arrangement is significantly different to the more well-known Cash version. A vast array of sounds, including distorted guitar loops, intersperse with an almost whispering vocal from Reznor which eventually grow into a powerful and memorable chorus, leaving a profound lasting impression.

The album’s release was met with near universal critical and fan acclaim and generated over four million sales. This success cemented both Trent Reznor and the Nine Inch Nails entity as an important creative force in modern industrial rock music.

The album’s often disparate, varied production from both Reznor and Flood, creative use of sampling and instrumental texture would be widely imitated by artists both sides of the pond, resulting in Trent Reznor being sought out as both a producer and creative guru by many big names in the music world.

Trent Reznor Setting up new studio ‘Le Pig’ and filling it full of gear, Reznor delicately crafted the various elements, both musical and thematic, that make up The Downward Spiral

Adrian Belew Former King Crimson and David Bowie guitarist Belew was asked to use the guitar in a reactionary, expressive way on The Downward Spiral, creating many melodies and hooks improvisationally

Chris Vrenna Full time live drummer Chris Vrenna was used throughout The Downward Spiral, his chopped up live loops were incorporated in addition to the various electronic percussion