Mastering at home with WaveLab

Despite the flexibility of modern DAWs, there are some tools out there that make home mastering a much more straightforward – and professional sounding – endeavour. Steinberg’s WaveLab is perhaps the king of these mastering-in-the-box solutions. Here’s why… 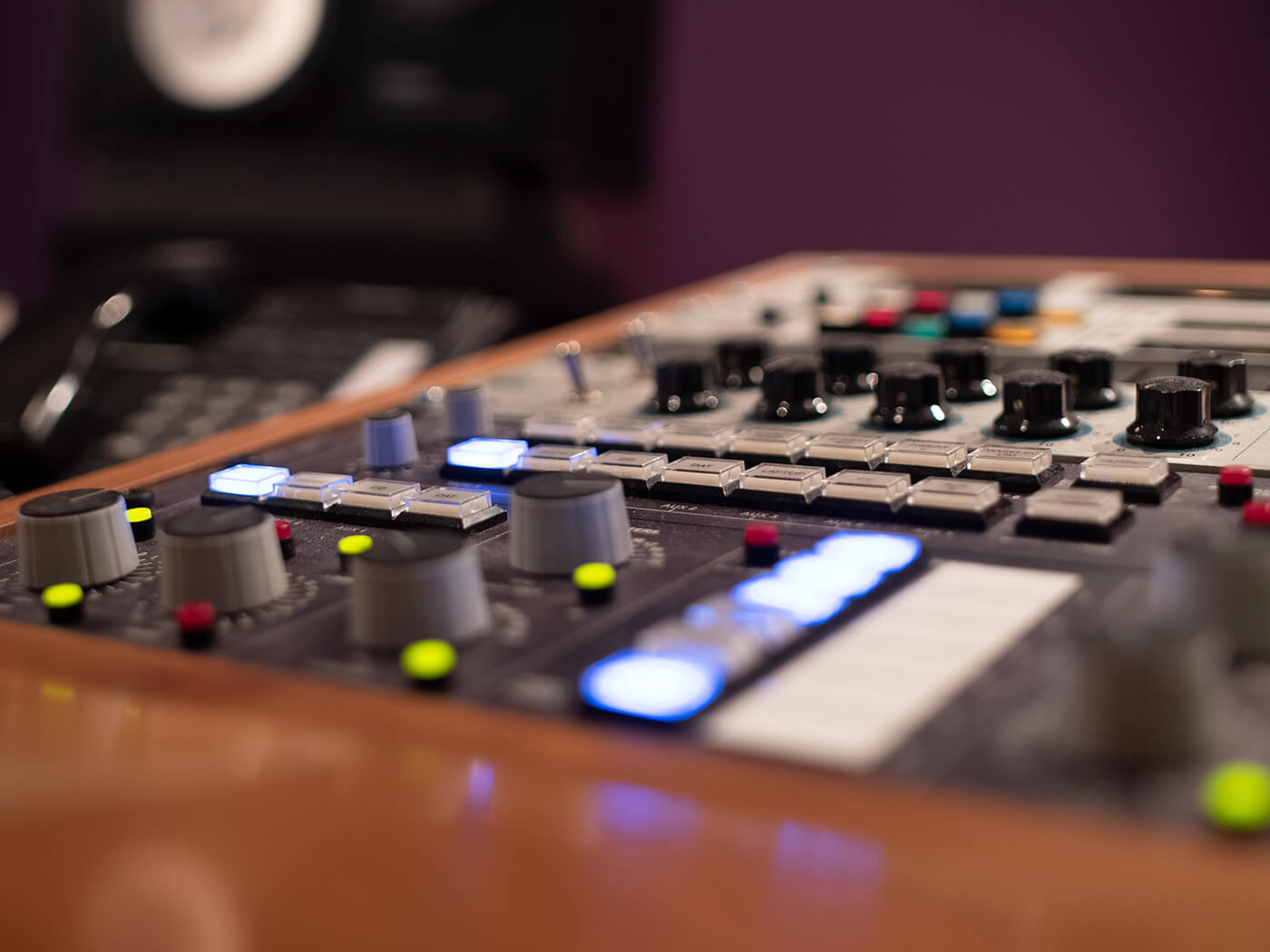 Mastering with a conventional DAW can be a good way of working, but it has its shortcomings. The most significant of these is the way processors are applied as plugins on a track, with the need to continually save and load processor settings when moving between different songs in your collection or album. You can work around this by bouncing processed songs/stems into new files as you work through an album, only re-loading the settings if you decide a tweak is needed at a later point. But this is still cumbersome, and can become quite a handful when mastering from stems.

Thankfully there is a DAW designed specifically with mastering in mind, and which can completely side-step these sorts of problems. Originally released by Steinberg in 1995, WaveLab has grown to become the de-facto DAW for audio mastering. It looks unlike most DAWs, and most like a standard wave editor, a role in which it excels, but waveform editing is just the bottom layer in the program’s extensive tool set. 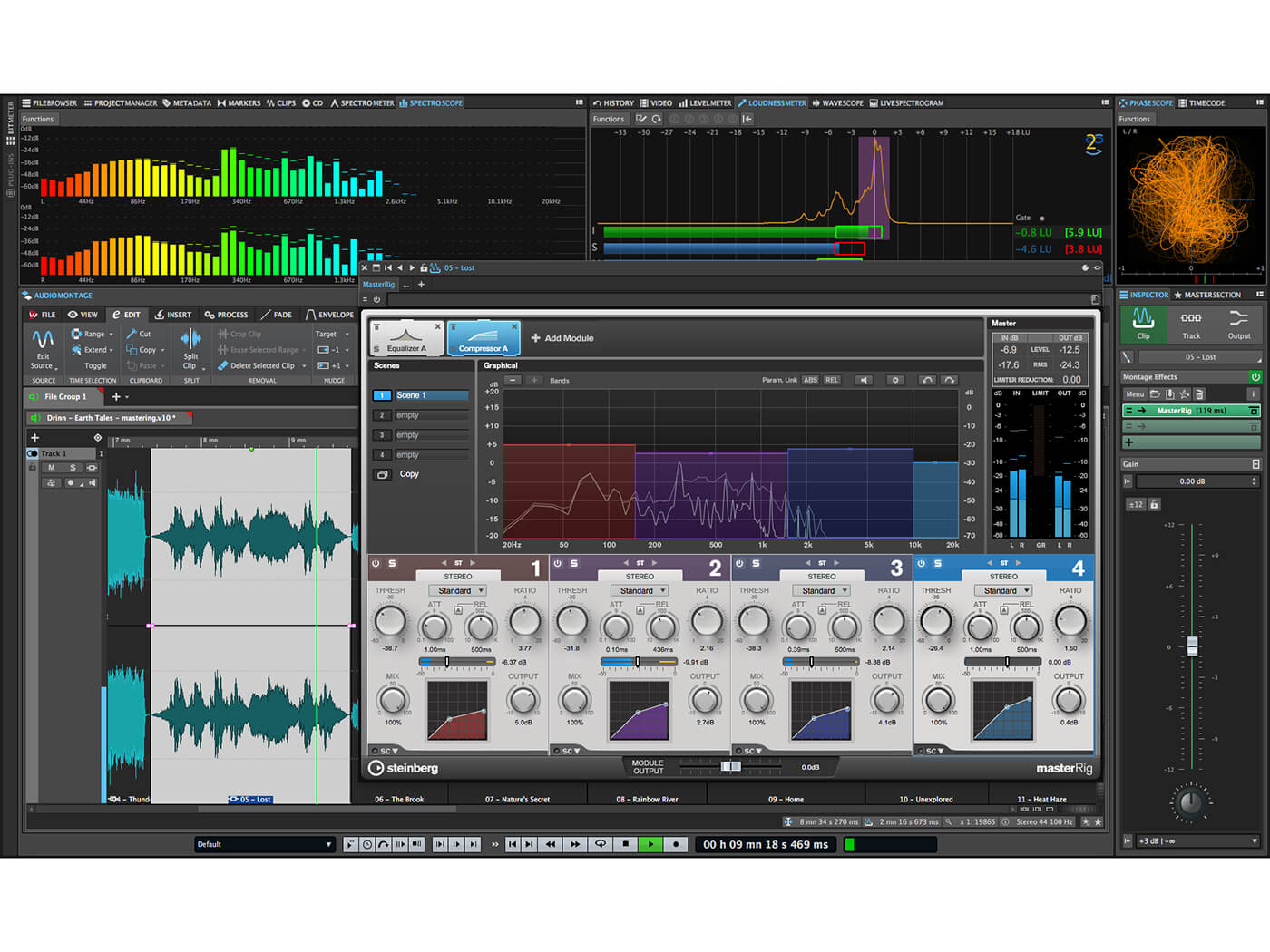 Collections or albums of songs – referred to in WaveLab-speak and from here-on as ‘montages’ – can be laid out, mastered and written to various output formats, including being written directly to audio CD. Realtime processing can be applied per-clip, per-track, per-montage (montages can be nested within montages), and across the overall master output. Montages can contain multiple tracks too, with each individual clip retaining the ability to have its own processing chain, which is just the ticket for stem mastering.

Whilst many aspects of audio mastering have been thought of as ‘dark arts’ in the past – coming easily to the experienced mastering engineer but that are exceptionally difficult to pin down for the uninitiated – metering is much more definable, albeit quite varied. Metering is of vital importance in mastering, a fact reflected in the amount of WaveLab’s toolset that is dedicated to the task. But we always talk about trusting our ears in the studio, so why should meters be so important?

The human ear can only hear sounds that fall within a distinctly limited frequency range of around 20Hz to around 20kHz, but we’re also fairly insensitive to variations in volume: we don’t hear the short-lived transients and peaks that limit the amount of gain we can add to a signal, instead perceiving loudness from longer-term signal levels; and we are much more sensitive to differences in loudness in the mid-range of our hearing’s spectrum than in the lower or higher registers. Consequently, one of the most important parts of any audio signal chain is metering.

There are various forms of metering – VU, PPM, RMS and LUFS are the main ones you’ll come across – and in mastering you need all of these. PPM (Peak Program Metering) measures the instantaneous signal level, and is sensitive to the transient peaks that we can’t hear but that could wreck a recording if allowed to clip; it’s very poor at indicating the perceived loudness of a signal, though. VU (Volume Unit) and RMS (Root Mean Squared, I.E. average) meters are better suited to this: A VU meter’s slow, damped response is a good match for the way our ears perceive volume changes, but it can’t give an accurate absolute measurement and has to be calibrated to the material being worked on.

RMS, on the other hand, averages the PPM measurement over around 0.5s to 1s, which gives an accurate readout that bares some relation to how we perceive loudness. RMS can also be subtracted from PPM to give a reading of the short-term dynamic behaviour of a signal – this is often referred to as the ‘crest’ or ‘crest factor’ of a signal, and can be very useful when comparing and matching the dynamics of different components of a montage.

These days, computers have made possible a different way of measuring perceived loudness, known as LU, or Loudness Units; when applied to a standardised scale, this is known as LUFS (Loudness Unit Full Scale). LUFS uses filtering so that their measurement reflects the frequency response of the typical human ear, and it samples the signal over different time scales. Momentary loudness measures the signal over 400ms, short term loudness is measured over between one and several seconds, and integrated loudness is measured across an entire song or montage. LUFS metering is vital when working with audio for broadcast, as they are the unit in which strict specifications governing signal levels are defined. LUFS are also widely used in audio for film, gaming and VR because they ensure consistency across an entire production.

LUFS are also used by online audio and video streaming services, and if your audio falls outside of a platform’s specifications and tolerances it will be treated to some very unsympathetic gain and dynamics processing. So if you want your lovingly-crafted audio to stay lovely on YouTube, you need to keep an eye on your LUFS, something that’s easy with Wavelab.

Generally, during tracking and mixing, all work is done in the conventional left-right stereo domain; that is, the various signals are balanced within the stereo field by feeding differing levels to left and right speakers. This standard stereo processing is regularly used in mastering too, but sometimes better results can be achieved by processing signals that have been mid-side encoded. Like stereo signal, a mid-side signal has two discrete components, the mid signal and the side signal. The mid signal is essentially the centre of the stereo image, whilst the side signal contains left-to-right offset information.

When encoded in this way, the two signals are still just ordinary audio signals and so can be processed as such. When used in mastering, this allows you to apply different processing to the central core of the sound and the outer ‘width’ of the sound. For example, you might apply quite a strong compression to the mid signal whilst using only a mild compression on the side signal; when decoded to left-right stereo this would result in a master that sounds very solid and powerful at its core, but that retains dynamic detail and gains spaciousness.

WaveLab’s built-in MasterRig processors – EQs, dynamics, saturators and so-on – can all operate in stereo or mid-side modes. This makes them ideal for mastering, and is another key feature that make the program so much better for mastering than a conventional DAW.

A general note now, on loudness specifications. Video streaming services tend to set very conservative loudness specifications, for example if producing audio for YouTube you should aim for an integrated loudness of between -16 and -13 LUFS. They do this to ensure loudness consistency across the platform, and to avoid an outbreak of the ‘loudness wars’ that have been the bane of audio CD production since the mid-90s. This was a trend where producers and artists tried to out-do each other on how loud their recordings sound by using ever-more extreme compressor and limiter setups to reduce peaks so that the average signal could be increased without causing clipping.

Unfortunately, no matter how clever the compressors and limiters being used, as one approaches maximum loudness in a digital system, and the crest factor approaches 0dB, all you’re really left with is a square wave! All of the digital audio bits are maxed-out, suppressing sonic detail, and so all nuance and subtlety within the recording is lost, replaced by a solid brick wall of sound. This may sometimes be what you’re aiming for, but it is generally unpleasant to listen to for long periods of time, and the loss of detail translates directly to a loss of perceived audio quality and fidelity.

In an attempt to counter this, respected mastering engineer Bob Katz proposed a new set of metering standards referred to collectively as the K-system. The idea is very simple: Instead of placing the zero-point of the metering scale at the maximum possible point of 0dbFS, Katz’ system offsets this zero point by -12dB, -14dB or -20dB (for K-12, K-14 and K-20 scales respectively). This gives a target point that leaves plenty of headroom above the zero point in which signal peaks can exist and recreate the subtlety lost to the loudness wars.

Not everyone follows Katz’ recommendations, but Wavelab caters for it, allowing the scales on its PPM/RMS meter to be set to any of the K standards, and we recommend you follow the recommendations when tracking, mixing and mastering… unless you’re producing the very heaviest of heavy metal, of course!