Learn how to create vocal effects like Tame Impala

We pick apart some of Kevin Parker’s vocal processing techniques from his most recent album, The Slow Rush. 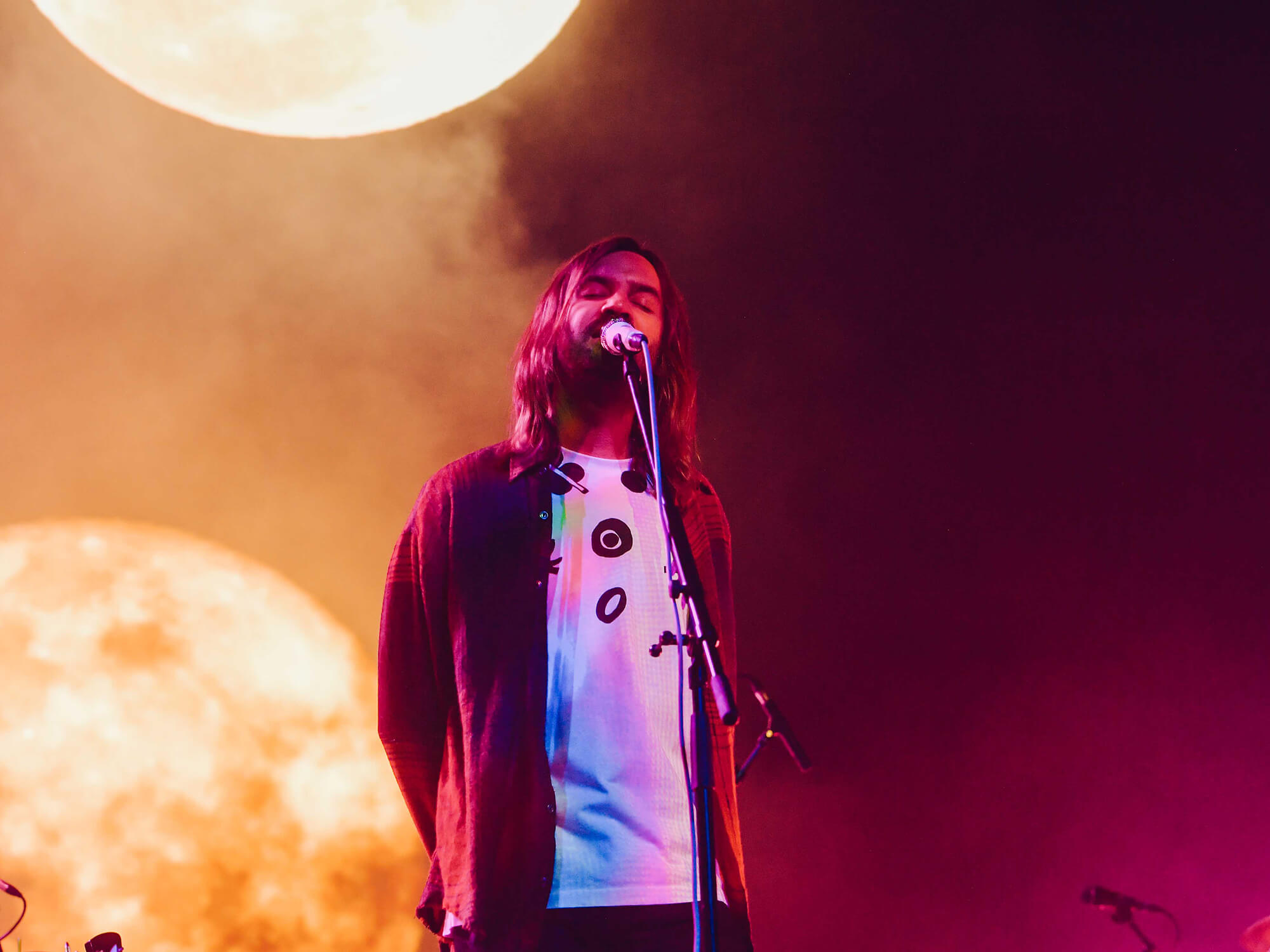 Tame Impala’s unique brand of psychedelic-flavoured music has found favour across the world. Australian mastermind Kevin Parker’s 2010 debut album Innerspeaker earned him the country’s platinum and the UK’s gold disc. Parker makes every element of his music by himself, assembling a live band only when it comes to performing on stage.

A huge element of the Tame Impala sound is the vocal construction and treatment. Here, we’re breaking down some of the techniques used by Parker to process his vocals, showing you how you can achieve similar sounds from the comfort of your own studio using any DAW, as well as commonly available plug-ins.

One of Parker’s most common tricks is the telephone effect. By dialling in the right EQ and distortion settings, you can make a full, rich-sounding vocal sound thin, dull and lacking definition, as if recorded through a telephone.

The intro vocal on Tomorrow’s Dust, from 2020’s The Slow Rush, was given such treatment, deliberately made to complement the similar effect used on the backing instrumental. However, it sounds clean with a big, yet relatively thin reverb added into the mix. How can you make this effect yourself?

EQ filters are the best starting point. Try placing a 30dB/oct high-pass filter on your vocal line at 500 Hz to thin the low frequencies, before rolling off some high frequencies using an 30dB/oct low pass filter at 5.5kHz.

Once you’ve shaped the tone of the vocal line, add some lush reverb on an effects channel. Valhalla DSP’s superb Vintage Verb will give the vocal that spacious sound you’re after.

Select the Bright Hall mode with a decay time of about three seconds. As you can hear in the video below, once the reverb sounds dense enough, you can adjust the high-frequency damping and high/low-cut filtering to craft the kind of thin tone employed by Parker.

A trademark of the Tame Impala vocal is the use of effects such as phaser and flanger. As well as creating an artificial feel and bringing a psychedelic vibe to the vocals, these effects can add thickness and stereo width when used correctly.

For example, Breathe Deeper uses a phaser effect on the vocal in the second verse of the song, adding emphasis and movement to the vocal lines but without sounding overdone. This complements the general tone of the song, creating a dreamy feel and adding density to the overall sound.

To emulate this sound in your own productions, try using a slower speed for the phaser modulation of one, two or four bars; this will give the effect a more dreamlike, stable sound similar to that of Tame Impala. Set the speed too quick and the vocal will sound robotic and effected, as heard in the video below.

Don’t be tempted to overdo the strength of the effect. Although pushing the mix level and resonance during busy sections of a song can make the phaser effect on a vocal stand out, being more restrained can make for a more striking effect.

Try automating these parameters instead by assigning them to a MIDI control surface – riding the mix and resonance levels while the song plays can make the effect fit nicely.

Artists creating psychedelic-inspired music often emphasise individual lyrics using delay. Parker uses this technique throughout The Slow Rush, so let’s explore how you can add this into your own productions.

There are two main ways to achieve this: either set a delay on an effects return channel and use send automation to pick out the desired words, or copy the specific pieces of audio you want to add the effect to.

Here, we opted for the latter but made two audio channels that we copied specific words from the vocal line on to. We did this so we could pan each channel hard left and right, respectively, before placing a mono delay effect (SoundToys EchoBoy) on each one. This allows us to set each delay slightly differently to the other, allowing the creation of a unique stereo delay line that wouldn’t be possible using a single stereo or ping-pong delay.

For this, we chose a half-note delay time, then a different saturation style for each mono delay channel to give the respective echoes a different tone. To add some unique flavour to the effect, we opened the right-sided delay and adjusted the Feel control towards Dragging, placing the echoes slightly behind the grid.

You may not hear robotic vocoded vocals much in modern music production but Tame Impala often deploys this 1990s-flavoured effect in his tracks. You can hear this from the very start of The Slow Rush in the opening track, One More Year.

Vocoders work by using an external input signal (known as the modulator) to shape the sound of the vocal (the carrier) via a bank of filters. While you can theoretically use any signal as either the carrier or modulator, it’s common to use a synth as the modulator, with a vocal line as the carrier.

To demonstrate this technique, we used a synth to put together a simple chord progression in C. Then we loaded a stock vocoder plug-in onto the vocal line and chose an external carrier with the synth as the input signal.

You can hear the synth line in the above video and how this modulates the vocal once the vocoder is turned on. After setting up the basic vocoder routing, we then dialled in some alterations to the stock settings to give our vocal a more Tame Impala-esque sound.

Increasing the release time to about 300ms gives the vocoded signal a longer tail, similar to increasing the release on an ADSR envelope. Finally, we tweaked the bandwidth amount down to 70 per cent to give the vocal a more hollow sound. A valuable tip with vocoded vocals is to experiment with the wet and dry mix; for example, adding a little of the dry signal back in can create an intriguing sound with flair.

We’ve been through a number of the common processing techniques used for vocals on various Tame Impala records, but we’ve got plenty more general advice if you’re really looking to nail that particular vocal sound.

Choosing a suitable microphone to record the vocals in the first place will always get you a strong step towards the sound you’re after. Kevin Parker uses a Sennheiser MD-421 dynamic microphone for his vocal recordings, so try using a 421 to record your vocal takes – or, failing that, reach for the ubiquitous Shure SM58.

If you’re finding the raw takes are too bass heavy, try backing away from the mic by a few inches to reduce any proximity effect issues.

Once you’ve tracked your raw vocal takes into your DAW, consider how you’re going to treat them with EQ and effects. Tame Impala vocals are naturally thin-sounding, so make sure you roll off the low frequencies below 150Hz using a high pass filter. Scooping some low mids out around 350Hz is also a winner for achieving the required tone.

When it comes to reverb and delay, the key is to think psychedelic by using both effects liberally to create a big sense of space, but without overpowering the rest of the song. If your reverb doesn’t sound thick enough, try compressing the reverb return rather than turning up the decay time; this will make the reverb more dense, but without swamping the dry vocal.