After surviving personnel difficulties and a misfiring debut EP, Arcade Fire roared onto to the scene with a unique sound and a battery of unstoppable tracks. Andy Price sifts through the embers of this landmark album… The Tracks 1. Neighbourhood #1 (Tunnels) 2. Neighbourhood #2 (Laïka) 3. Une Année Sans Lumière 4. Neighbourhood #3 (Power […] 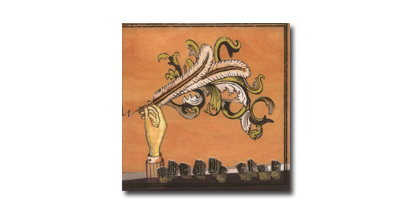 After surviving personnel difficulties and a misfiring debut EP, Arcade Fire roared onto to the scene with a unique sound and a battery of unstoppable tracks. Andy Price sifts through the embers of this landmark album… 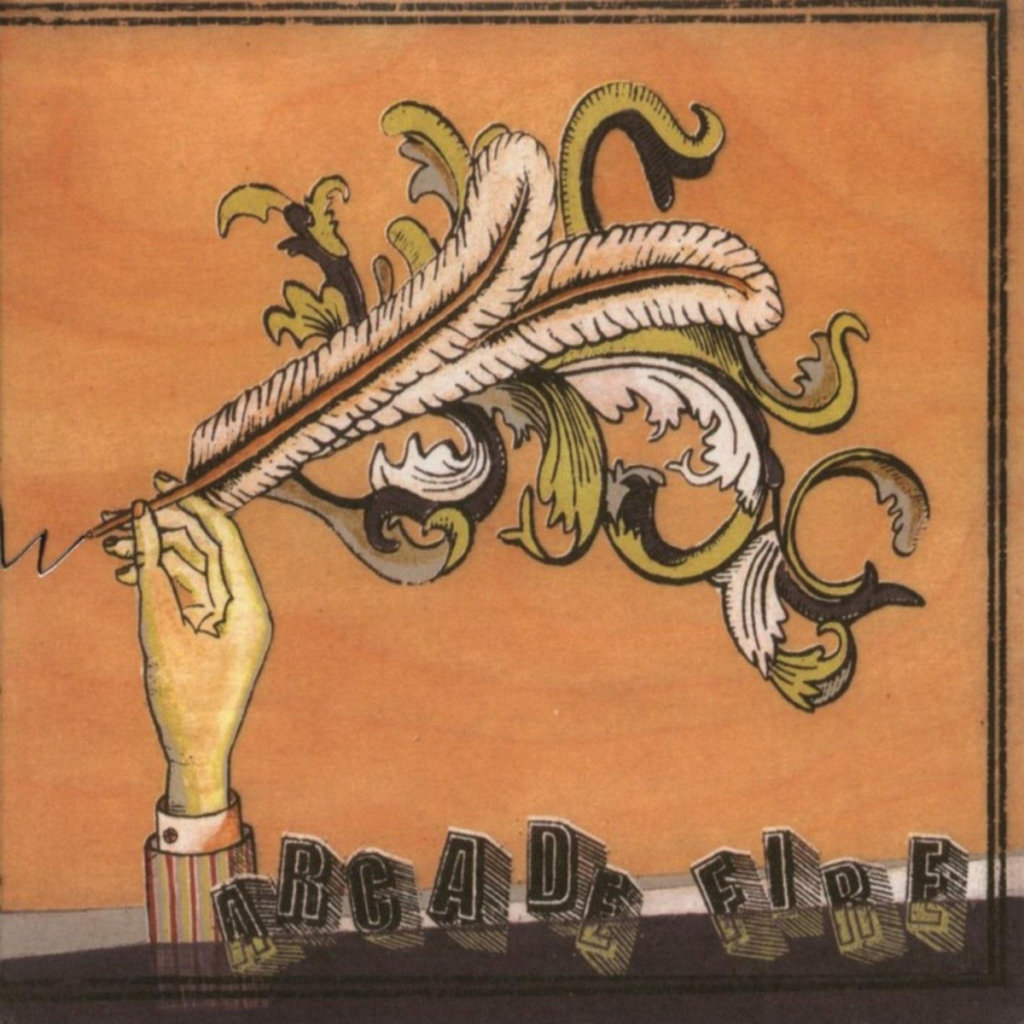 Isolating contemporary classics can be tough, and many a long-awaited album has been released to uproarious fanfare only for the dust to settle and the cracks to be all too apparent (Oasis’ Be Here Now, for example), yet Arcade Fire’s Funeral, an album that recently celebrated its tenth anniversary, appears to be only increasing in stature and respect.

The album, the band’s debut, wasn’t just a significant milestone because of its rich and powerful songwriting and varied instrumentation, but also because of the textured and lush production from the band themselves. The decision to self produce gave the group complete creative control over their mixes, treating the production as just as essential a creative stage as the writing and recording process.

The end product was not only warmly received but also set a new benchmark for the completely self-sufficient creative unit, and introduced the world to a very different kind of band…

Sitting Comfortably? Then I’ll Begin…
Formed by Canadian singer/songwriter Win Butler in the early 2000s, the initial lineup of Arcade Fire was already thinking big: creative friction and differences of opinion regarding the band’s musical direction resulted in an almost permanently revolving door of members.

In 2003 the lineup finally solidified with the addition of Butler’s new wife, Régine Chassagne, sharing vocal duties and other instrumentation; Richard Reed Parry, who played multiple instruments; Tim Kingsbury on both bass and guitar; Howard Bilerman, provider of drums and additional guitar; and Win’s brother William, who played pretty much anything he could get his hands on.

After an initial false start with their eponymous EP, the band’s first full-length album Funeral was recorded over eight months at the Hotel2Tango studio in Montreal. Fortuitously the band’s drummer Howard Bilerman was working as an engineer at the studio, giving the band a little more flexibility to spend longer recording and producing.

During the recording sessions both Win Butler and Regine Chassagne had to deal with the loss of one of their grandparents, an unfortunate turn of events that influenced the album’s mood, atmosphere and title; however, their combined losses would further cement both their marriage and creative partnership.

The band peppered their debut with as many musical instruments as they could muster. Strings played a large role, being arranged and performed primarily by Owen Pallet, along with a fair sprinkling of harmonium, xylophone, violin, synthesizers and accordions.

First Rites
Funeral commences proceedings with Neighbourhood #1 (Tunnels). The first track in a four-part series of thematically linked songs on the album begins with a quiet scene-setting melody that slowly builds in volume as the various elements of the song’s mix come into play. Beautiful, high-register piano is peppered through an evocative composition that eventually includes insistent, growing strings and a vocal from Win Butler which, although initially fragile and delicate, by the end has built into a despairing yet euphoric wail that evokes some of David Byrne’s more dramatic efforts.

The following track continues the series, but on Neighbourhood #2 (Laïka) the tone is significantly brightened by the addition of an accordion in the arrangement, adding a touch of Parisian nostalgia. Butler’s vocals are compressed in the verse, giving him an air of lo-fi detachment, yet the chorus is a full-blooded hook that sounds like a different song entirely.

Un Année Sans Lumière (translation: A Year Without Light) stands in contrast to the previous two powerful pieces. A tender guitar-orientated song that features prominent backing vocals from Regine Chassagne, halfway through the track an upbeat rhythm kicks in, lifting it from the murky depths of introspection to becoming a dance-able (albeit, tense) jig.

Let’s Dance
Neighbourhood #3 (Power Out) is perhaps the track that best signposted the way for the band’s resulting dance-rock career trajectory. A club favourite for its unique sound, the most musical way of describing it would be a quirky and energetic guitar whirlwind with vocals that sound almost rap-like with their quick-fire delivery and tight melodic construction. Power Out, as it’s more commonly known, is one of Arcade Fire’s standout tracks and one that became a live favourite in subsequent years.

The fourth in the Neighbourhood cycle is a more sombre affair. A soft lament (subtitled 7 Kettles), this piece provides the listener with a dreamy, relaxed breather after the aural onslaught of Power Out.

The romantic and yearning Crown of Love is a beautiful pop composition that wouldn’t sound out of place in the latter half of a romantic movie. Beautiful strings and tender crooning from Butler (ably backed by ghostly wailing from Chassagne) make this perhaps one of the most engaging tracks on the record. The orchestral contributors take centre stage in the mix, and like Un Année Sans Lumière the song’s rhythm abruptly changes near the end, evolving into a quite different and vibrantly coloured piece.

Here be Giants
The album’s heart, though, and a track that has become a universally adored contemporary anthem, is Wake Up. A growing, building monster of a song that pulsates with a powerful, life-affirming energy, its lyric-less chorus of ‘whoah-oh’s’ and operatic, symphonic sweep couldn’t have sounded more incongruous at a time when the DIY aesthetic of Strokes-y garage rock was the current indie trend.

With a main lyric that calls upon the youth culture to ‘wake up and hold your mistakes up’, it’s no surprise it became perhaps the signature song of both the album and the band.

Detecting the standout melody on Haïti is a challenge – primarily because it’s littered with hooks. Régine Chassagne takes centre stage with a breathy lead vocal that sounds somewhat Goldfrapp-esque. The mix is full of strange sounds, quirky sub-melodies and tense, evolving sound pads that rise and fall. A jaunty top-line surfaces on occasion before being submerged again in the sonic morass.

This tension is resolved by a perfect segue into Rebellion (Lies), which maintains a fairly straightforward indie-rock sound with bass, drums and a prominent vocal from Butler. The track also features some swelling violin courtesy of Sarah Neufeld, another large contributor to Arcade Fire’s mini orchestra and later to become a core member of the band. Horns and harps also play their part in the mix of a song that has become an enduringly popular staple of the band’s live set.

Love Becomes a Funeral Pyre
The album concludes with a haunting, Björk-like vocal from Regine Chassagne, backed by acoustic guitar, twinkly piano and what sounds like a harmonium. In The Back Seat wraps up Funeral’s themes and provides the listener with not only another gem of a song but a reflective commentary on loss, grief and moving on.

Funeral’s release was met with universal critical acclaim and the endorsement of both David Bowie and Bono, the former taking to the stage to perform with the band during 2005’s Fashion Rocks.

It’s true that Arcade Fire were greeted with a great deal of hyperbole and press attention, and even Win Butler himself would announce “Good evening, we’re Flavour of the Month,” before playing shows on the Funeral tour. What’s somewhat unexpected is that now, ten years on from the release of their debut album, the band are still gaining the same level of adulation, even performing a coveted Glastonbury headline slot in the summer of 2014. Their influence can be felt in latter-day releases by Coldplay, Take That and U2 (who would use Wake Up as their pre-show entrance music).

After years of scrutiny and dissection Funeral continues to stand as a landmark recording, and it will undoubtedly remain regarded as such for decades to come as more and more new fans discover this sonic masterpiece, judging it on its highly nuanced lyrical themes, grand musical ambition, rich arrangements and unique sound.

Richard Reed Parry Core member Parry contributed a wide variety of instruments to Funeral and was a primary figure in the album’s distinctive production style.