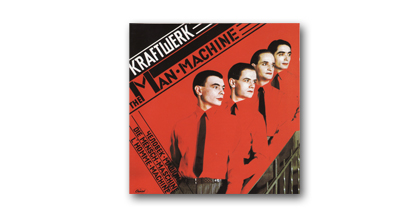 It’s Kraftwerk’s definitive musical statement, producing a visual and sonic aesthetic and presciently commenting on the encroachment of technology. Andy Price plugs in… 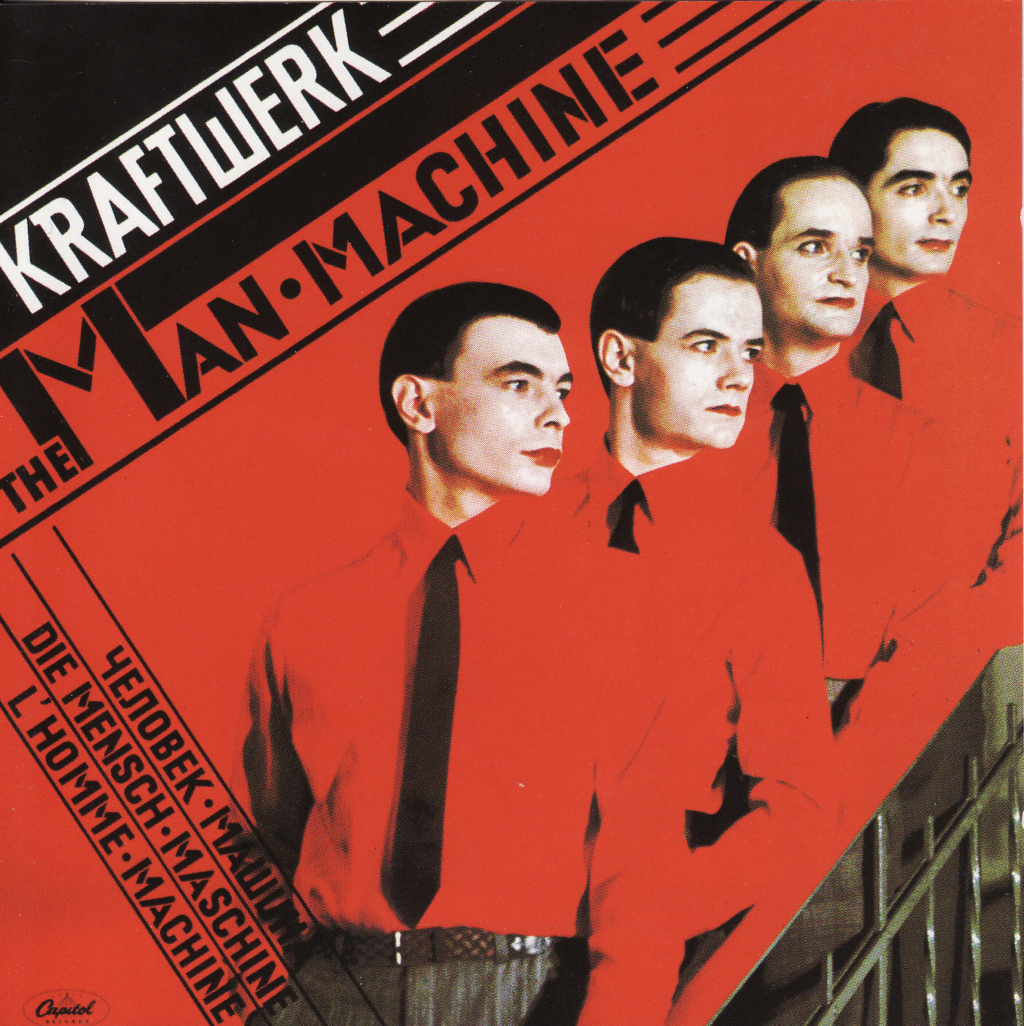 The finest hour of Germany’s premiere synth quartet, 1978’s The Man-Machine (or Die Mensch-Machine) finds Ralf Hütter, Florian Schneider and company gazing forward to an emotionless, technological future. How better to illustrate this novel concept than by utilising the most advanced musical technology around at the time?

Kraftwerk’s career up until that point had already crossed boundaries, both social and musical. Formed by Ralf Hütter and Florian Schneider at the Academy of Arts in Remscheid during 1970, the initially two-piece outfit had an early fascination with sound design and utilised flute, Farfisa and Hammond organs and electric piano to create their early instrumentals, later enlisting the help of Wolfgang Flür to provide electronic rhythms using a very early drum machine. These initial records were very free-form and exploratory, and lacked real hooks and adherence to song structures. 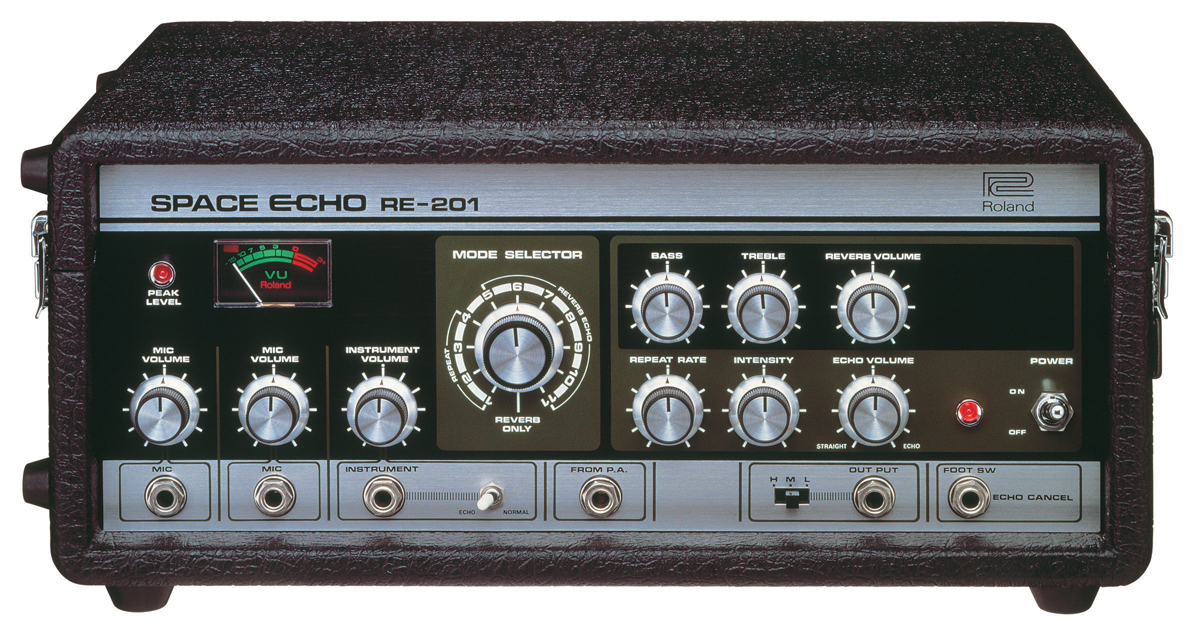 The exact Kling Klang kit list has always been a bit of a mystery, but we’re pretty sure they’ll have one of these in a cupboard somewhere!

Eventually, after the release of Autobahn, the band began to settle into being a pioneering musical force to be reckoned with, funding and utilising novel new instruments such as the EMS Synthi AKS. When Karl Bartos was recruited the four-piece was complete. Bartos brought with him unique and self-made percussion instruments including a Deagan Vibraphone.

The band recorded this and all previous (and later) albums at their own purpose-built Kling Klang Studio. Initially an empty room in a workshop, it would become the Kraftwerk nerve centre in which all their compositions were created.

Famously, the band never threw any of their older gear away, retaining everything throughout their career and often going back and re-using out-of-date equipment. They had one full-time engineer in the studio, but aside from his role everything else was created and produced entirely by the four members of Kraftwerk, who often spent eight to ten hours a day involved in intense studio sessions. At Kling Klang the band set up two ‘Synthanoramas’ – essentially two 16-step custom-built analogue sequencers that the band would utilise on the vast majority of their output during the 70s.

On The Man-Machine Kraftwerk dabbled with much of this older, vintage gear that they had accumulated over the previous decade, including pieces of kit that were specially commissioned for the band. They also made great use of both the Minimoog and ARP Odyssey synths during the composition stages of The Man-Machine. Ralf Hütter said of the band’s approach to the album: “We are playing the machines, the machines play us, it is really the exchange and the friendship we have with the musical machines which make us build a new music.”

Previous records Autobahn, Radio-Activity and Trans Europe Express had been adventurous yet also conceptually watertight, with transport, radio and Europe, respectively, being the dominant themes. This would continue on The Man-Machine with a thematic merging of lyrics, imagery and music to realise their vision of a future in which man and machine have merged.

The mechanical whirring that kickstarts the record and leads into opening track The Robots (or Die Roboter) is indicative of the bold approach to composition found throughout the album. The mysterious and ominous electronic soundscape consisting of generated bleeps and bloops is a statement not just of musical direction but of the record’s main theme – this is an album that explores man’s relationship with technology, or rather technology’s relationship with man.

The synthetic 16th-note synth riff that repeats throughout the song weaves and interacts withthe harsh and monotone vocoder’d lyrics that speak of ‘charging our battery’ and ‘dancing mechanically’, establishing an eerie and unsettling vibe from the get-go. 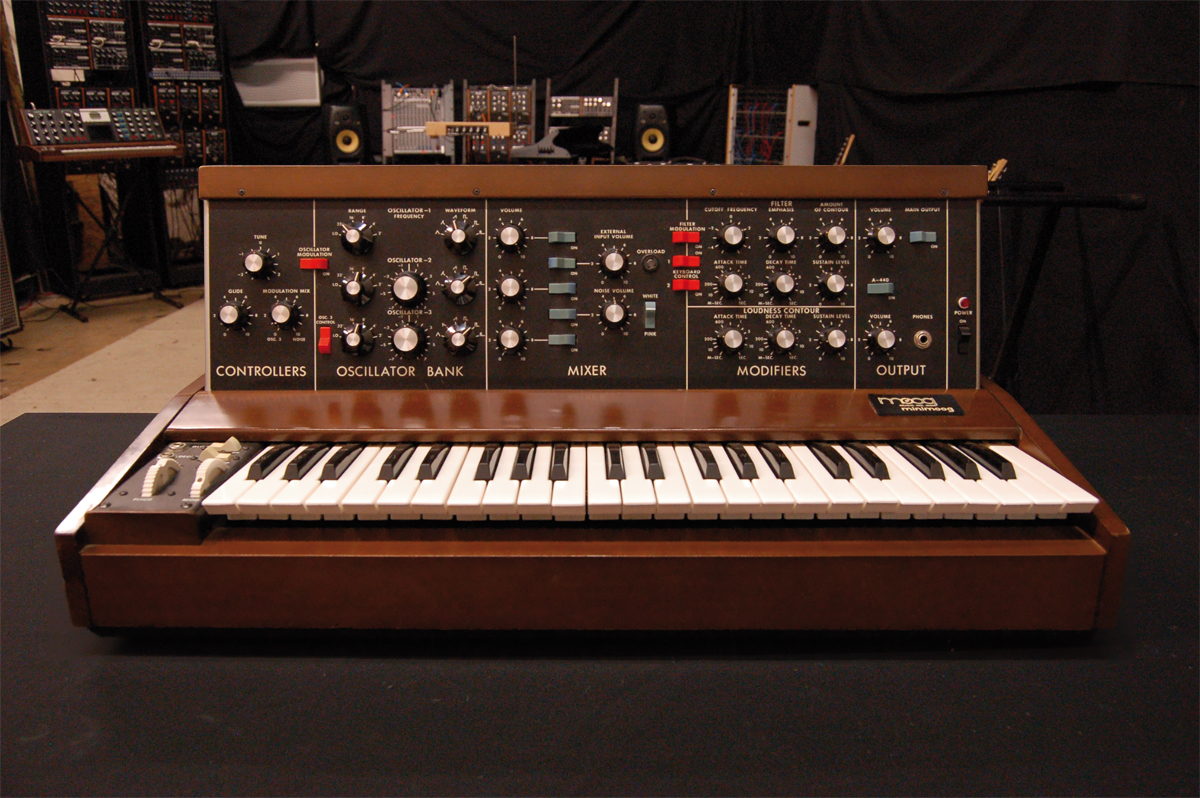 At this point in musical history the vocoder was still a brand new innovation. The technology behind the unit was originally conceived as a method of cleaning up phone signals, and it does not affect the human voice in so much as it imposes its characteristics on another instrument. For example, a synth would sound as if it were generating an artificial voice using only the electronic elements available to it by replicating the harmonic content and amplitude of a carrier signal. Kraftwerk were one of the first bands to really popularise this technology.

The instrumental that follows The Robots is nothing short of wondrous. Spacelab is a distant, twinkly and somewhat emotive piece of music with a throbbing, pulsating melody. The piece keeps this main melody running all the way through but alters enough of the underlying sound bed and counter melodies so that the track retains the listener’s interest. This combination of musical elements leaves the listener feeling that a long journey has just taken place through a robotic, technological wonderland.

Metropolis paints a bleaker picture, the title evoking the obvious image of the golden robot in Fritz Lang’s early sci-fi film that bears the same name. With an increased use of modulation and pitch-shifting in the intro, the main riff kicks in over a minute into the composition before launching into a futuristic and pulse-pounding flight into alienation.

Perhaps the album’s standout, and certainly most popular, track is The Model (or Das Model), a remarkable piece of music that still sounds positively futuristic in 2014 and in many ways has become Kraftwerk’s signature song. The unique bassline was created with a Micromoog synth and is supported by the song’s percussive hook. With an atypically satirical lyric and a catchiness that secured them the number one spot in the UK charts (three years after its initial release!), The Model is one of Kraftwerk’s shining achievements and is for many the gateway through which the extraordinary music of this band is revealed.

Neon Lights has a musical, synthetic lightness, which is juxtaposed by the dominant, strident percussion. An incredible piece with a production saturated with a range of tones, in particular the second half when the song evolves into a flowing, technicolor masterpiece of lushly orchestrated electronica. The evocative music and crooning vocal paints a picture of gliding through a neon-stripped dystopian cityscape in an unrecognisable future.

The title track of the album closes the record. Beginning with a high-pitched repetitive synth riff and a distant bassline, the musical elements appear one at a time. This reverb-soaked composition retains the preceding track’s gliding quality and is the apotheosis of the record’s central thematic and philosophical ideas. The vocoder’d and echo-y vocal (likely generated with a Roland RE-201 Space Echo) seemingly appears out of nowhere with repetitions of the words ‘man’ and ‘machine’, which electronically merge to create an uncertain fusion of humanity and technology.

Automaton for the People

When The Man-Machine was released it didn’t exactly set the world on fire; however, critical reaction was strong and has only grown stronger, with the record being regarded as Kraftwerk’s magnum opus and an integral part of the development of electronic music. Its sound would be a massive influence on the burgeoning new wave and electro-pop scenes that would fully flower in the early 80s before becoming absorbed into the mainstream in the 90s. 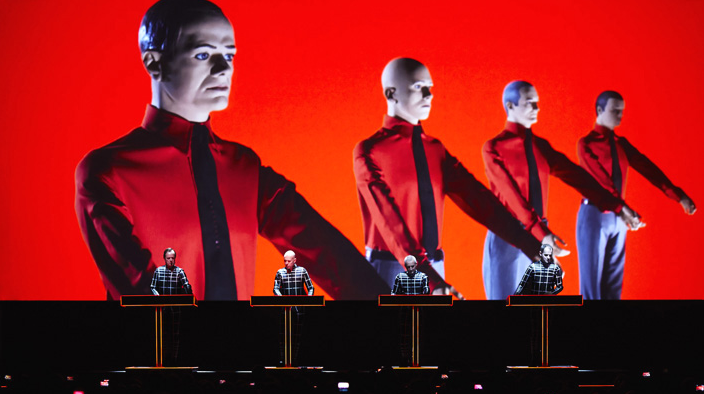 Kraftwerk played with the idea of man becoming intertwined with machines. The Man Machine is still regarded as a seminal work by both critics and the band themselves (image courtesy of Kraftwerk.com)

Electronic music journalist Simon Reynolds stated that The Man-Machine cemented Kraftwerk’s “ancestral centrality” for the resulting synth-pop explosion. Kraftwerk were at the vanguard of electronic innovation and no better is this exemplified than on The Man-Machine. A Kraftwerk-ian vibe would be detected in the chart-topping work of the glacial Gary Numan and Pet Shop Boys, and later in the left-field experimentation of Radiohead and Björk.

The record’s sleeve artwork, using photography by Günther Fröhling, has become perhaps the most striking and iconic image of the band. Angular and uniform on a red-and-black background in a constructivist art style is the perfect visual counterpart to the sounds contained within, sounds which to this day continue to inspire and resonate with an increasingly technological world.

Florian Schneider
Founder member of Kraftwerk and self-confessed ‘sound fetishist’, Florian Schneider was a driving force in establishing the concept for The Man-Machine.

Ralf Hütter
Kraftwerk’s lead vocalist and multi-instrumentalist, Hütter co-devised the ideas that formed The Man-Machine with Schneider, as well as taking on the bulk of production duties at Kling Klang Studios.

Karl Bartos
On this record, Kraftwerk’s erstwhile percussionist was given songwriting credit for all the tracks due to the increased importance of rhythms and electronic beats in the band’s music.

Wolfgang Flür
Percussionist Flür also played a much larger role in the making of The Man-Machine than on previous records. His controversial 2003 autobiography was entitled I Was A Robot.

Thanks to KraftwerkFAQ.com for technical and equipment information