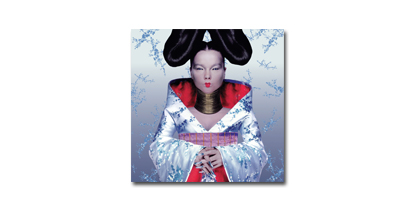 Homogenic marked the moment when Icelandic experimentalist Björk evolved from a kooky dance-pixie into an electronic titan. Andy Price explores this landmark album… 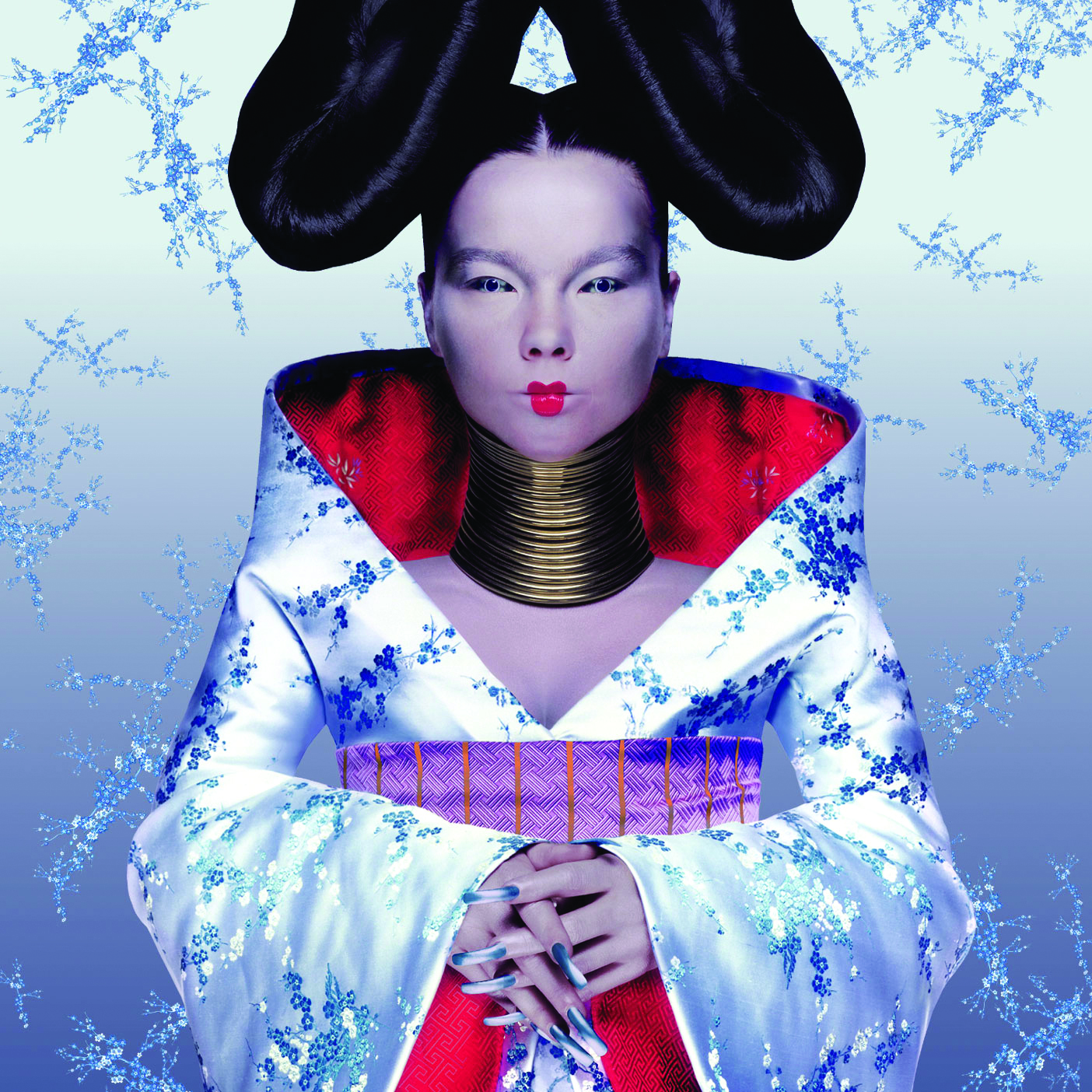 Björk had more than made an impression on the mainstream by 1997. Her magnificent debut solo record had been superseded by the more adventurous follow-up Post which, although displaying significant musical chops, still kept one foot firmly in the commercial pop pond.

Mainstream hits such as her oft-lampooned cover of Betty Hutton’s It’s Oh So Quiet bothered the British singles charts while high-profile relationships kept her hot property in the tabloids. However this was not a position that Björk had particularly longed for.

Having to deal with the darker sides of being a public figure – from a psychologically-damaged stalker posting a sulphuric acid bomb to her London home before committing suicide, to the headline– (and hair–) grabbing incident at Bangkok International Airport – were deeply unsettling for the young artist to deal with. For her, music had always been the sole priority.

Björk approached the writing process of her third album with a very specific creative mind-set. She wanted the record to have what she defined as a ‘simple sound’ and reflect the landscape of her homeland, Iceland. Using a variety of electronic instruments and new, fresh approaches to composition, Björk worked closely with audio engineer Markus Dravs on the initial sessions for the album which took place at her home studio at Maida Vale.

Together they planned and devised the bare bones of the record before the sudden surge in media attention brought on by the bomb incident. This, combined with her desire to retreat from the London electronic scene, convinced her to relocate to the Spanish studio of her drummer Trevor Morais. It was there, at El Cortijo Studios in Malaga where she would record and produce all of the ensuing album, Homogenic.

Björk decided not to re-enrol producer Nellee Hooper who had produced her two previous albums, and instead enlisted a cabal of close musical friends and associates to co-produce the album with her. Aside from Markus Dravs the most significant creative collaborator on Homogenic was Mark Bell, formerly of Sheffield electronic dance duo LFO, an outfit that had a fundamental influence on the Euro techno genre.

Mark would help Björk translate her sometimes more left-field compositional ideas as he recounted in an interview with Groove Magazine in 2001 “(Songwriting) is different every time with her. Sometimes it comes from a freeform session, a melody that she hums to me, some basic chord structure or the lyrics. It’s always fun and she hasn’t any preconceptions about genre so we take it wherever it wants to go.”

Also part of the production team was Scottish trip-hop expert Howie B who previously worked with Björk on Post and songwriter and producer Guy Sigsworth. Dravs would later say “When you work with Björk, you are one of her closest relatives, you’re almost like her brother.”

For many of the tracks that make up Homogenic Björk would initially compose melodies individually either in her head, spontaneously or on paper, and would then use her small Casio keyboard to work out string parts and various forms of musical backing.

She and her team would then work through each piece from a rhythmic standpoint which was occasionally fraught with difficulty, especially when Björk would add unusual timing signature changes into her naturally-born compositions. Bell and Björk quickly developed a strong rapport and would work very closely on each track “Could you make the bass-line more furry?” was an oft-reported request of Björk’s to Bell during the making of Homogenic.

The militaristic rhythms, darkly imperious bass line, reversed accordion and counterpointed ethereal vocals that make up opening track Hunter set the scene for what is to come. It’s a tense composition that finds Björk in a completely new landscape to any she had been in before.

Joga sees Björk experimenting with a combination of Baroque and classical styles, with huge towering ‘volcanic’ beats and exquisite string arrangements (provided late in the production process by the Icelandic String Octet) that paint a sonic picture of the geographical beauty of her homeland and is the real conceptual heart of the record. She likened Joga to a sort of National Anthem.

This track like no other showcases Björk’s mastery of fusing the right elements to creative emotive and powerful music – the soaring vocals, cinematic and richly-orchestrated string sections are saturated with beats that some have described as being akin to proto-dubstep.

The next track, Unravel, makes significant nods to her Icelandic heritage as well. Using a vocal technique which folklore specialist Njall Sigurason compares to that of traditional Icelandic choirmen, Björk half-sings and half-speaks her way through a track which Radiohead frontman Thom Yorke would later say “is one the most beautiful songs I’ve ever heard.”

Bachelorette was originally written for an abandoned film project and contains lyrics from her good friend, the Icelandic poet Sjon. The song conceptually continues a song-cycle begun with the tracks Human Behaviour on her album Debut and Isobel from Post which lyrically concern the arc of a character called Isobel.

Björk would elaborate on how Bachelorette fitted into the Isobel-cycle. “She is leaving the forest and she decides to go to the city to have a normal life. She tries her best and it doesn’t work out and she comes back to the forest and she is happier there.” Clearly one doesn’t have to look far to see the parallels with Björk herself. The song would include a range of live instruments in the mix and alongside the beats and strings, they included alp horn, accordion, timpani and timbales.

The gentle and contemplative All Neon Like follows with Bell’s trademark ambient drum and bass rhythms punctuating the increasingly visual and fascinating lyrics (including the delightfully incomprehensible ‘I’ll cut a slit open and a luminous beam feeds you, honey!’)

5 Years includes stand-out 8-bit MIDI keys and electronic, stompy drum programming. Later the emotive Icelandic String Octet return to engage in what sounds like the audio equivalent of a duel with the harsh, treated drums while Björk herself pushes her vocals to the limit of emotion and drama. Immature features a textured landscape constructed from various samples and highly-treated synthesiser loops floating on soft chordal pads. Once again Björk’s voice is the standout instrument here, winding its way through the mix’s peppered assault course of elements with varying degrees of power, emotion and dexterity.

The most conventional song on the record has to be Alarm Call, certainly in terms of instrumentation and melody but not in terms of lyrical content ‘I’m no fucking Buddhist, but this is enlightenment,’ Björk expresses in this track, while multi-layered vocals weave in and out, merging together like an aural mind-scape. Eventually the track falls into a relatively straightforward groove.

The climactic song Pluto is as aggressive as Björk has ever been, a completely explosive resolution to the tension that the instrumental juxtaposition found in the previous eight tracks had created in the listener. Industrial overdrive and manic, screaming vocals define this track. The hauntingly-beautiful All Is Full Of Love then quietly draws the albums to a close, inspired by the idea of mechanical people (as the song’s video would make clear) it also featured clavichord and a final bow for the Icelandic String Octet.

The album was almost universally critically acclaimed upon release. The NME said Homogenic was “a stinging triumph for the spirit of adventure” which succinctly explains why the album still stands tall today as Björk’s most beloved work for both fans and critics alike.

The album’s iconic cover art features Björk dressed in an Alexander McQueen-designed costume that is simultaneously futuristic yet traditionally oriental. Björk looked back on the overall themes of Homogenic in an interview with Pitchfork in 2007 where she said “Homogenic was different, it was quite an aggressive album. I’d gone through five years of doing five billion interviews and being stalked. A lot of really happy experiences, too, it wasn’t all bad. I was under a lot of pressure that I had never experienced before, so Homogenic was very much like the sleeve art. We were trying to make this person that was under a lot of restraint – like long manicure, neck piece, headpiece, contact lenses – still trying to keep the strength.”

Although Björk would later explore denser and more deeply defined sonic landscapes with albums such as 2001’s lushly arranged Vespertine and 2004’s vocally dexterous Medulla, it was Homegenic which cemented Björk as a fearless explorer of new musical frontiers. By merging organic instrumentation with electronic to create an album so richly rewarding, Björk proved to the world that she was quite a unique artist to be reckoned with.

Björk
After the success of Debut and Post, Björk retreated from the limelight, recruiting a team of diverse collaborators and crafting the dense but personal masterpiece, Homogenic.

Mark Bell
Former co-star of Sheffield electro pioneers LFO turned house producer, Bell worked closely with Björk to translate her ideas into the layered compositions they would become and had quite possibly the largest hand in production duties.

Markus Dravs
Markus Dravs and Björk sketched out Homogenic’s concept at her London-based studio. Dravs would have free reign to compose and experiment alongside Björk’s own ideas.

Howie B
Long-time creative collaborator Howie B returned to work with Björk on this record, the two became close and would eventually become a couple.