How to: Set up Dolby Atmos at home

Keen to get the most from your home entertainment system? Here’s everything you need to know about setting it up for Dolby Atmos. 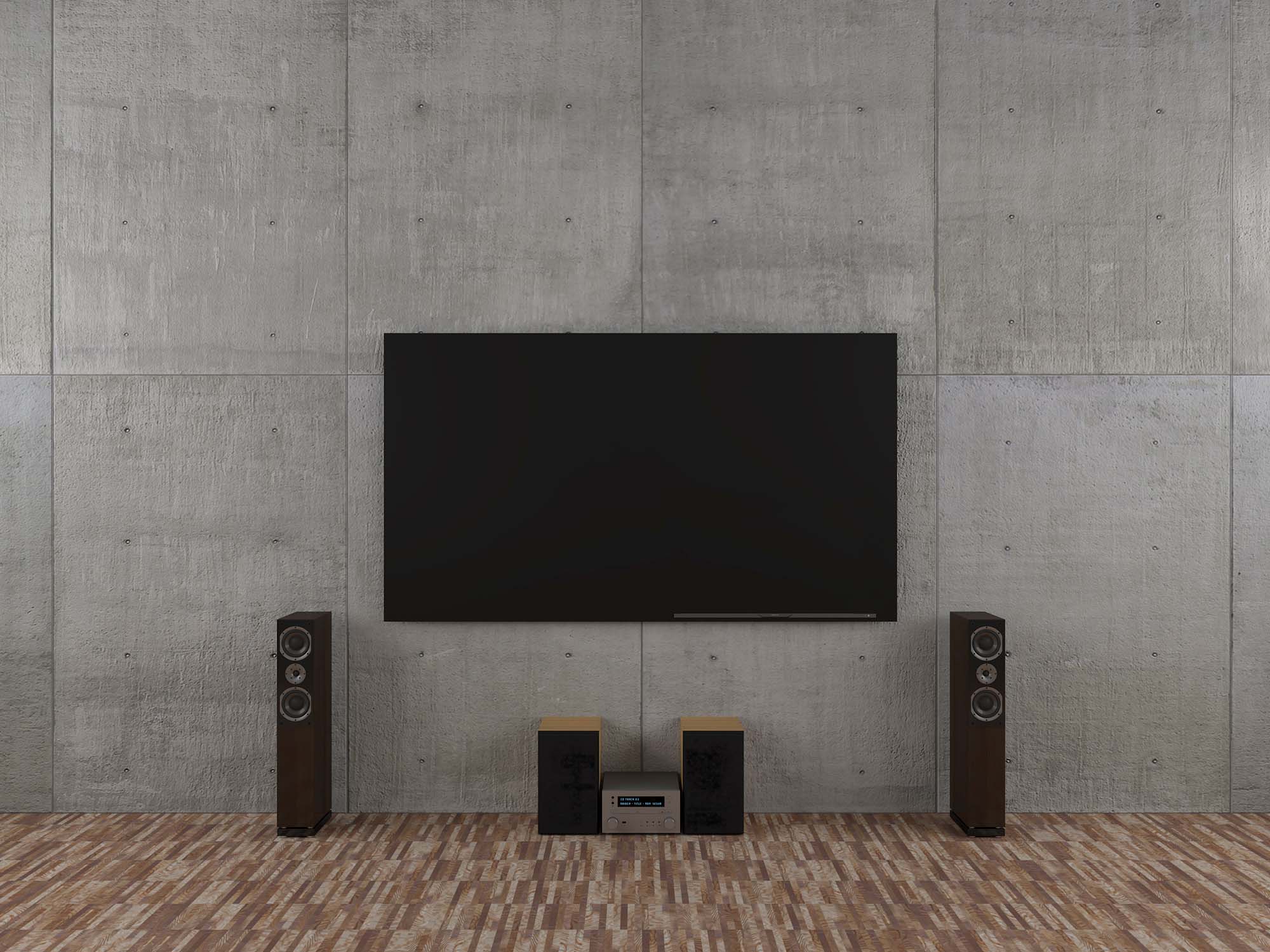 Dolby Atmos is an industry-leading surround sound technology that, in a nutshell, creates virtual channels which trick your ears into believing sound is coming from all directions. It’s a game-changer for anyone looking to upgrade their home entertainment system, and you’ll find many speakers, soundbars, receivers and so on today boasting Dolby Atmos tech.

One of the tech’s selling points is that it doesn’t take as much effort as you’d think to set up your home entertainment system for Dolby Atmos. Here’s how to take advantage of it so your music, movies, and games sound better than ever before.

How does Dolby Atmos work?

Dolby Atmos is a term you have almost certainly seen while at the cinema. In the purest sense, it expands upon existing 5.1 and 7.1 surround sound setups by adding surround channels that are directed all around you. That means in the cinema, you’re enveloped in sound because speakers are placed along walls at all heights – and sometimes behind the screen. Speakers are even installed on ceilings ensuring the sound effects feel more convincing.

Such setups aren’t very practical at home. Instead, some careful placement and calibration means that you can have speakers that reflect off the ceiling, providing you with a virtual experience akin to the cinema, but with none of the inconvenience. It’s all down to smarter placement and smarter technology within the speakers to replicate the cinema experience without the expense of installing dozens of speakers. It’s even possible to use a soundbar or a pair of headphones instead of speakers to provide this virtual experience.

Do I need to buy specific equipment for Dolby Atmos?

Not always. If you’ve bought a TV in the last few years, many of them support Dolby Atmos. While using TV speakers is never as effective as having a room full of speakers or a dedicated setup, it can be a good alternative if your budget is tight.

Similarly, if you’ve bought a streaming stick or device in the last few years, or own a recent games console, you probably already have a device that supports Dolby Atmos.

This doesn’t apply if you own a Sony PlayStation 4 or PlayStation 5. Both consoles support 5.1 and 7.1 surround sound, but they don’t support Dolby Atmos as Sony uses its own spatial audio technology: Tempest 3D Audio. Xbox gamers, however, can enjoy Dolby Atmos audio.

Check your existing equipment before you feel obliged to upgrade everything. Many consumers will find they already have what they need for Dolby Atmos and just need to add on speakers or a soundbar to reap the benefits.

What speakers do I need to use Dolby Atmos at home?

A Dolby Atmos setup at home doesn’t have to be as complicated as one at a cinema. Installing a height speaker in your ceiling isn’t convenient, so instead, manufacturers have created different systems depending on your living arrangement.

Typically, the options are: a 5.1 speaker setup, a 7.1 speaker setup or a soundbar. As the numbers suggest, the setups involve either placing five speakers, seven speakers or one soundbar; each setup includes a subwoofer, too.

However, it is possible to expand most setups with extra speakers. Dolby Atmos is a modular system; you can add more speakers over time, although most people tend to stick to a traditional 5.1, 7.1 or soundbar setup.

5.1 vs 7.1 vs Soundbar vs Headphones/Earbuds for Dolby Atmos

A 5.1 system tends to have three speakers at the front with two at the back of the room or on its sides, while a 7.1 system adds a couple of extra speakers to the mix.

Something like the Focal Sib Evo Dolby Atmos 5.1.2 speaker system is a good middle ground. Two compact speakers for left and right are each outfitted with an additional speaker driver on their top panels which feature Dolby Atmos. Focal claims this driver is able to “reproduce both horizontal and vertical waves towards the ceiling”, which in turn mimics the immersive sound of cinemas. Additionally, the system includes a subwoofer and three smaller speakers for centre and rear surround.

Some soundbars also offer a similar Dolby Atmos experience, such as the Sony HT-X8500 and the Sonos Arc. Placed under your TV, the Sonos Arc looks unremarkable but uses 11 drivers including two height channels to create a wide soundstage for whatever you’re watching or listening to. While not quite as effective as a traditional full speaker setup, it’s far more convenient to install plus there’s the option to wireless connect a sub as well as a pair of matching rear surround speakers if you want to develop your Dolby Atmos setup over time.

Want a more personal touch? Some headphones can provide a similar experience to a home speaker setup – except tailored just for you. These use spatial sound technology to ensure that it feels like sound is coming from above, below, or around you, even though you have a pair of headphones or earphones attached to your head rather than a regular speaker setup. It’s all down to the headphones’ technology to reproduce the content in 360 degrees. Ideally, you want a set of recommended Atmos-enabled headphones such as the Corsair HS80 for gaming or Apple AirPods Pro for watching movies or listening to music.

Once you’ve bought a speaker setup, headphones or a soundbar, you need to have equipment for streaming or playing Dolby Atmos content.

Your existing Blu-ray player or streaming device may already support Dolby Atmos – many devices conform to the latest specifications required – but check beforehand while you’re pricing things up.

If you have an Xbox One or Xbox Series X|S, there’s support for Dolby Atmos, but you’ll need to download the Dolby Access app to use it. Fortunately, most Dolby Atmos-enabled headphones come with a voucher for downloading the app and gaining the license. Otherwise, it’s a fairly inexpensive purchase.

PlayStation users, however, miss out on Dolby Atmos for gaming as the PlayStation 5 currently only supports Sony’s proprietary Tempest 3D Audio.

For music streaming, Apple Music offers Spatial Audio on thousands of tracks. Alternatively, Amazon Music has many tracks mastered in Dolby Atmos too. The most reliable service for Dolby Atmos tracks is Tidal but not all devices have compatible apps for the service.

Do I need an AV receiver for Dolby Atmos?

An AV receiver isn’t essential for everyone, but it can be a useful addition as it gives you more control over your setup, and you can upgrade the individual components of your system – or expand it entirely – over time.

You’d then want to get an AV receiver which will decode a Dolby Atmos soundtrack. Even budget AV receivers now support Dolby Atmos, and it’s possible to buy packages from companies such as Pioneer or Elac which simplify your Dolby Atmos setup time.

If you buy a Dolby Atmos soundbar, there’s generally no need for an AV receiver. But bear in mind that these soundbars tend to use upward-firing drivers to create the ‘ceiling sound effect’ with fewer speakers – so sound quality isn’t as good as a bona fide speaker setup. For those with limited space though, they’re a good way to enjoy Dolby Atmos without having to rearrange your living room.

What is ARC and eARC?

Basically, they both mean you can plug your sound equipment into the back of your TV with one HDMI cable. By doing so, you can control your speakers or soundbar via your TV’s controls meaning there’s no need to use separate remotes. In a way, it also means you don’t need an AV receiver either as ARC/eARC does much of this work for you but many audiophiles will still prefer the flexibility of an AV receiver.

Check that your TV has a dedicated ARC-ready HDMI port. Many do unless your TV is quite old. That’s the port to plug your soundbar or speaker system into. If you have a newer TV – from 2019 and onwards – you may have an eARC port. This is a more modern take on the format, which can handle more advanced audio formats and higher audio quality such as 32 channels of audio and eight-channel 24-bit/192kHz uncompressed 38Mbps data streams.

Do I still need digital coaxial and optical inputs?

This won’t give you Dolby Atmos support – although Dolby Digital is still very good for older technology. Our advice? Skip the cables and focus on HDMI for your Dolby Atmos solution.

If you haven’t got a Dolby Atmos speaker setup or soundbar, all is not lost when it comes to Dolby Atmos height virtualisation. It’s a phrase you may have seen when learning about Dolby Atmos. It’s a technology that creates a ‘virtual’ Atmos experience with non-Atmos supporting hardware.

It aims to simulate the overhead sound experience of Atmos via its speakers without you needing to place them above your head. It’s done through applying filters that simulate the sounds you would ordinarily hear from overhead without actually being physically located there.

It’s often a feature that’s available in budget AV receivers such as the Denon AVR-X2700H and Pioneer VSX-534 to make them better value for money and provide you with a similar experience to superior models.