We live in a world of endless, pristine synth presets. As brilliant as they are, don’t you sometimes want to smash out of the preset bunker and really make sounds that stand out from the crowd, or that just sound, frankly, weird? Follow these 10 tips for an extreme sound makeover… 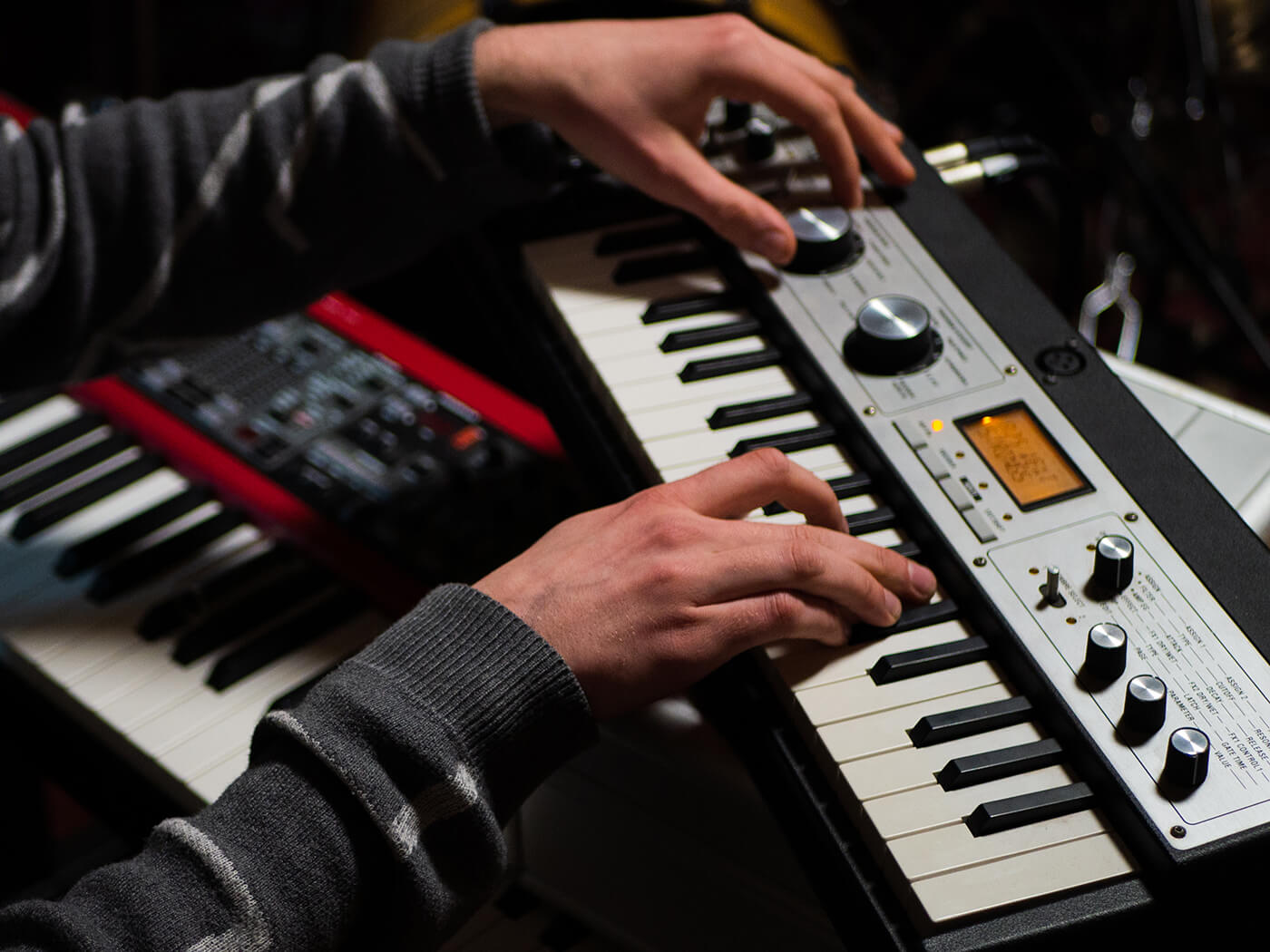 Get to know one sonic weapon

Getting to know the tools of your trade is key to any aspect of working life, but particularly sound design. You’ll need to pick one synth – preferably one that has a wide range of sounds – and get to know it section by section. Explore the very fundamentals of its sound – the oscillators and waveforms – and find out exactly what impact they have. Then it’s the filter types, the modulation and so on. Get to know your synth like it’s your sonic sister.

Don’t be scared to (ab)use presets

Ah, presets. To use, or not to use? Well, how about using them, but only as a starting point? Most synths have been programmed by experts to show off every side of the synth, so why not tap into this expertise? Choose one of the more dynamic sounds and push it to its extremes. Flip filter types, modulation destinations and waveform types – see the next tips for more on this. But the main thing is that someone has done the hard graft for you and with a bit of tweaking, you can get weird and extreme – fast. Here, we’ve loaded in the Out Of Breath preset on Carbon Electra and with a simple filter and resonance adjustment, made it our own.

Know where you want to go – but…

If you have some idea of the extreme sound you want to make, that is always a good starting point. Is it a distorted bass, an absolute screeching lead? Or is it a layered sound with loads of movement? With this as your starting point, you have somewhere to aim for – and again, use a similar preset as a starting point if you wish – but here’s the important thing. If you don’t get to that end point and get distracted, don’t worry. That’s what synth programming can be all about – if you find an extreme happy accident along the way, then it’s a bonus. You can always return to that original idea once you’ve saved the ‘accident’. 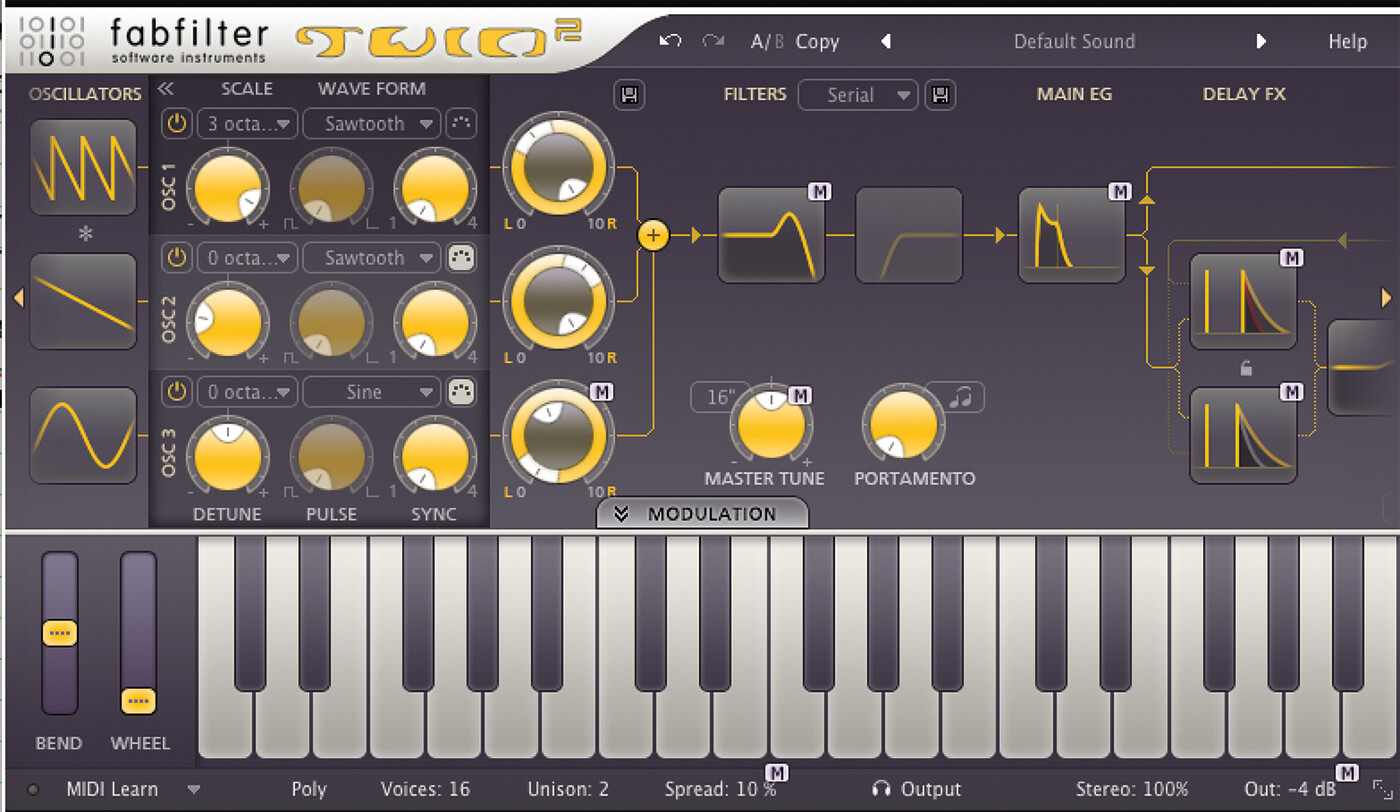 When focusing on the actual extremities of synthesis, the oscillators are the main starting block. Generally, you’ll get more than one to start with and it’s the blend of two where things can quickly start to get sonically interesting. Try using a blend of sawtooths – rich in harmonics – and the more hollow square waves. With extreme detuning between the two, you’re already heading to odd waters. In our example picture, we’ve raised the sawtooth on Osc1 by 8.4 semitones, and reduced Osc 2 by 3.4 and it sounds odd, but still in tune. For more horror-type sounds, raise the octave of Osc1 by more octaves (in this case, 3!).

Use motion and automation 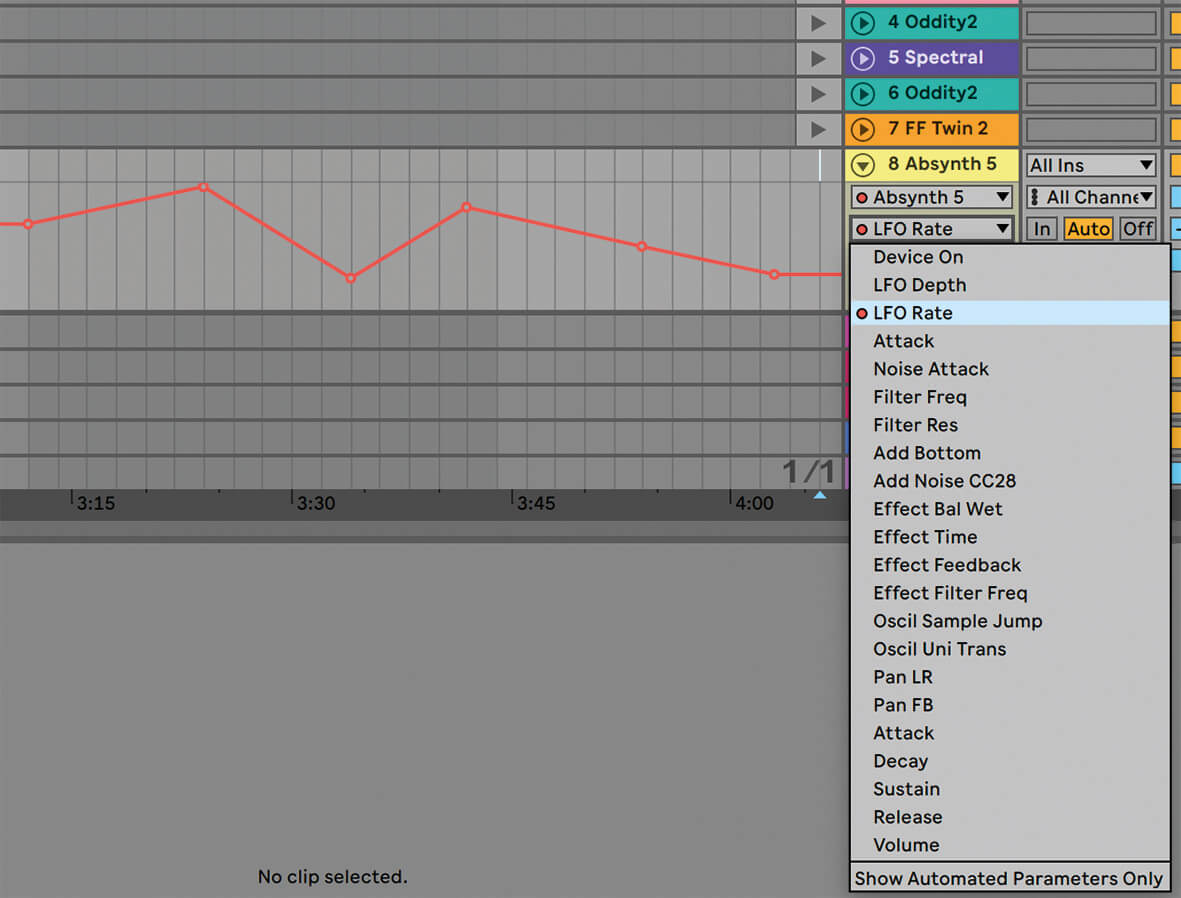 Adding movement to a sound and allowing it to change over time is one of the best ways to add interest to any synth and a great weapon for any kind of extreme synthesis techniques. On a basic level, your synth’s modulation section – see later for more – should give you loads of modulation options, but one tool that we often overlook in sound design is the very DAW we are using. By employing the ever-more-powerful automation features in most DAWs, you can control one or more of your synth’s parameters over time and record the results direct to DAW. And best of all, you can edit them later. 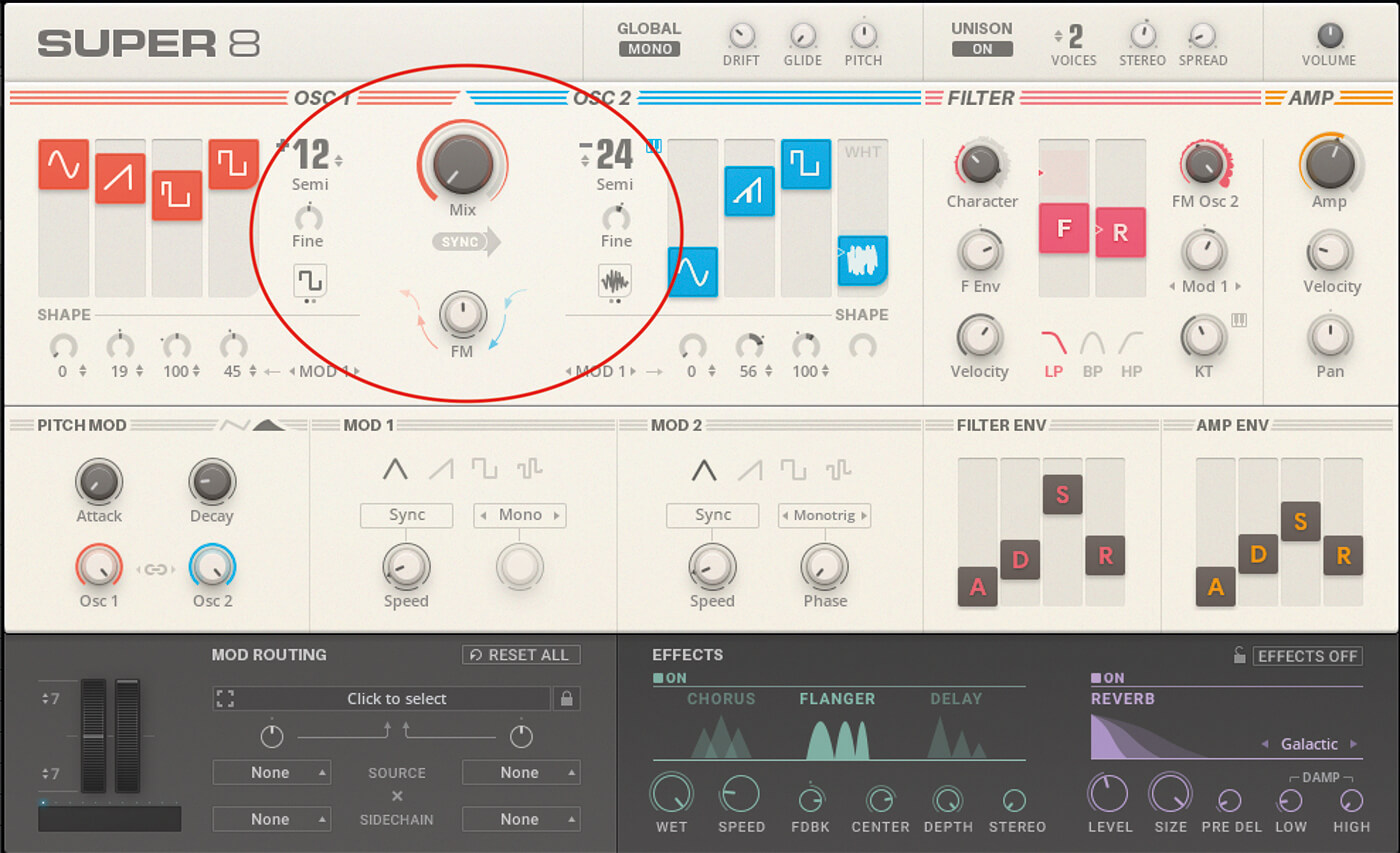 Many subtractive synths come with a slice of FM synthesis these days – two recent examples being Brainworx’s bx_oberhausen and NI’s Super 8. Essentially, the output of one oscillator is used to modulate the frequency of the other. This can give you anything from slight vibrato to full on metallic edginess, but will usually result in something weird at its extremes. In our example, we’re using Super 8 and enhancing the effect by detuning the oscillators quite drastically for extremely dynamic lead effects, with the amount of FM dialled in at just half.

You’ve got them, use them! 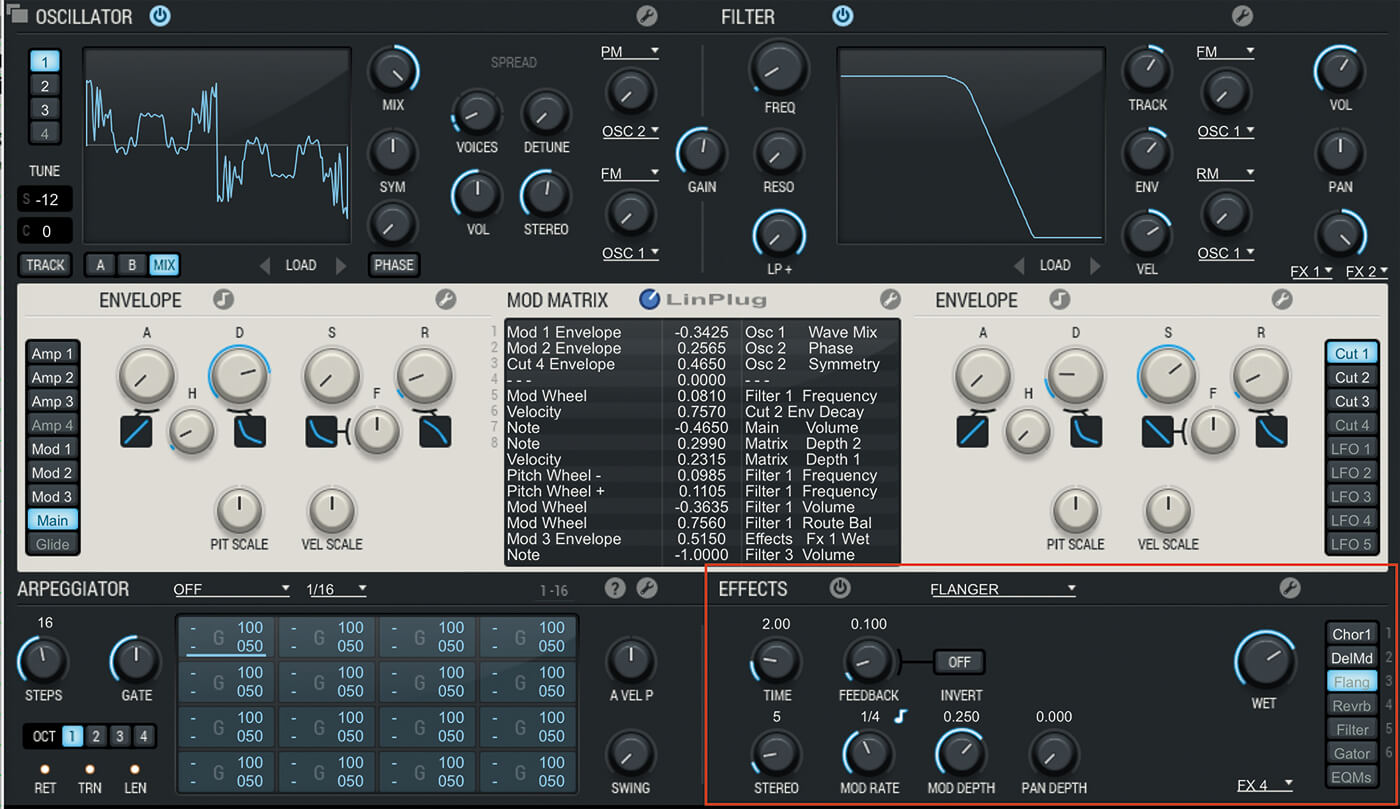 Rather like using automation above, sometimes, we just don’t realise the power that we have at our fingertips. Most synths now come with a host of extras built-in including an almighty effects section. These often sit unnoticed at the end of the chain, but can be drafted in for two main reasons when it comes to extreme programming – a) to tame a frankly ‘too weird’ sound with some compression, EQ or a touch of reverb, or b) add even more extreme sonics via distortion or amp modelling. Either way, they are there… so use them!

Wavetable synthesis is all the rage with synths such as NI’s Massive, Xfer Records’ Serum and the more recent Arturia Pigments bringing this synthesis to the masses. And it can be extreme. Wavetable synthesis allows you to create more complex waveforms than found on your average subtractive synth and then switch between them over time (on a table). It’s when you introduce modulation between waves on a table where things can get extreme – eg, applying LFOs to quickly move over a table of very different waveforms (or parts of it). Maybe a wavetable synth should be your weapon of choice…

In the end, the most extreme sounds come down to modulation, which has cropped up over many previous tips here. However, for even more outrageous creations, consider more unusual modulation destinations. One of the best ways to explore this is to use a fairly slow LFO and simply apply it to various destinations to gauge its effect. Many soft synths not only allow you to do this with ease, but even show you the resulting waveform – again, Pigments from Arturia is great for this. Once you hear the effect, increase the rate and depth to more extreme levels.

Last, but most definitely easiest, is to layer different and opposing sounds together. You can do this at an oscillator level by choosing very different waveforms and tunings, or simply mix and (not) match particular sounds on different synths. The simplest way is to have two instances of your chosen synth with the same MIDI sequence triggering both as you explore sounds on each. As you can see, it’s not always about delving too deeply into the depths of a synth, but even on this level, you can get very extreme results.

For more tips and tricks, check out our essential guides.