The history of drum machines

Branching out of the world of synthesis, the incorporation of drum machines alongside sequencers and synths has served as a fundamental staple of many performers’ live setups, as well as a studio fixture even in the digital age. We look back at the history and evolution of the humble drum machine, and learn how it became such a fixture. 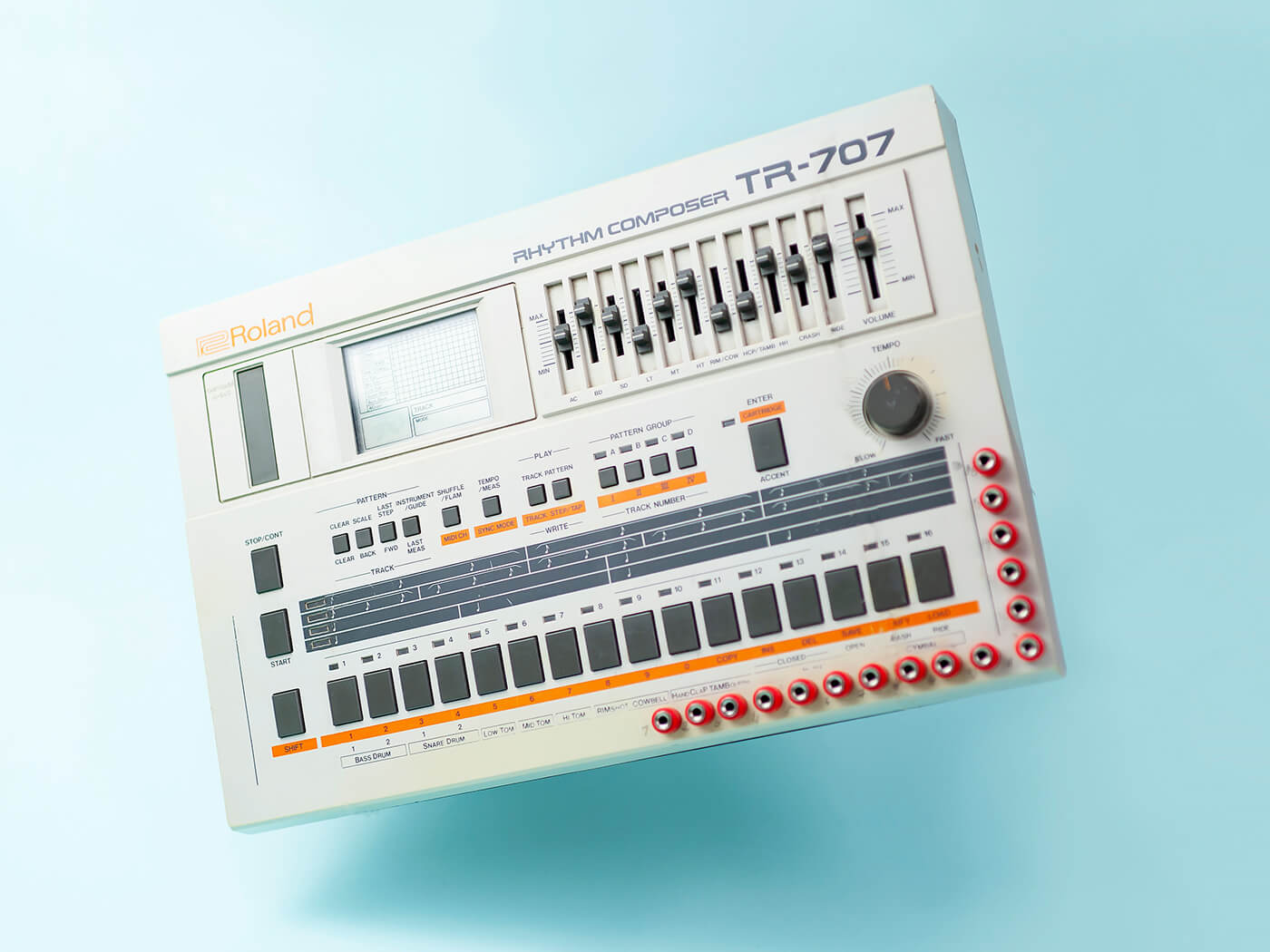 With the mainstream popularisation of electronic dance music in the early 90s, drum machines became an important ingredient of the processed sound. Image: Shutterstock

Drum machines have always occupied their own place in the history of sound synthesis and music-making, with their feet in both the synthesis and sequencing camps. They are often seen as a threat to ‘real’ musicians as a creative tool for musicians to exploit. It may therefore come as a surprise to learn that a working drum machine predates the development of the modern drum kit by nearly 700 years!

In his The Book Of Knowledge Of Ingenious Mechanical Devices, written in 1206 in what is now modern Turkey, engineer Ismail al-Jazari described a device consisting of four automaton musicians, two of which were drummers whose rhythms and patterns could be programmed by moving pegs within the mechanism. This was eventually built and used for entertaining the Sultan’s guests at parties.

To find the first electronic drum machine, though, we have to fast-forward to 1931 when electronic-sound pioneer Léon Theremin, in collaboration with musical theorist Henry Cowell, produced the Rhythmicon, aka the Polyrhythmophone (great names, huh?!). This bizarre conglomeration of valves and radio-based technology used the principles of the harmonic series to generate rhythms in response to the user holding down one or more of the contraption’s 17 keys.

But unlike Theremin’s other, eponymous, invention, the Rhythmicon never caught on, and only three were ever made, two of which remain operational, but locked away as priceless museum pieces.

Various different approaches to creating rhythms and beats were tried over the following decades and these were invariably marketed as additions to home organs rather than tools for professional musicians and studios.

These rhythm machines often used the mechanical solution of spinning discs with holes cut in them in order to create rhythm patterns: light shone from one side of the disc would be detected by photoreceptors on the other side as the holes spun past, thereby creating repeatable rhythmic patterns whose tempo could be adjusted by adjusting the disc’s rotational speed. They fulfilled a purpose for family singalongs and for providing a bit of rhythm backing for small-ticket solo performers, but they weren’t what we’d think of today as a drum machine.

The beat of a different drum

In 1972, EKO released the ComputeRhythm, one of the – if not ‘the’ – first fully programmable drum machines. The device had a matrix of push buttons arranged in a 16×6 grid with which patterns could be programmed and this set the template for drum machines and pattern sequencers for decades to come. ComputeRhythm also used a conventional analogue subtractive circuit for generating its drum sounds, – bursts of white, pink or brown noise for snares and cymbals, sine and square waves for kick drums and so on.

By the end of the decade, Roland had entered the drum machine fray with the CompuRhythm CR-78. Whilst still relying on subtractive synthesis for sound generation and not fully programmable, the CR-78 was nevertheless an important milestone as it was the first drum machine to be controlled via a digital microprocessor. Not only did this hugely increase the number of preset patterns that could be included in the device, it also laid the foundations for the rise of not one but two legends of modern music-making…

When it first hit the shelves in 1980, the Roland TR-808 wasn’t warmly received. Its ability to store user-programmed patterns and sequence these into full songs was great, but the sound was considered to be okay at best – almost entirely, but not completely, unlike a real drum kit.

The analogue 808 had landed in a world that was rapidly turning digital and was immediately pitted against the world’s first sample-based drum machine, the Linn LM-1, which was itself followed by a whole host of ever-improving machines from Oberheim, E-Mu, Yamaha and more.

Against this backdrop, it was little surprise that the 808 was a commercial failure and Roland ceased production in 1984 when the semiconductors used within the 808 became unavailable. Similarly, Roland’s TR-909, released in 1983 and the first Roland drum machine to sport MIDI ports, also used an analogue sound generator and was also something of a flop, being discontinued after only two years of production.

The much-maligned and overlooked 808s and 909s hung around on the second-hand market, changing hands for very little money as people traded up (or so they thought) to the latest sample-based machines. This put the devices in the hands of underground producers who were forging new electronic-music styles and genres. The 808 and 909 became an intrinsic and definitive component of those new sounds. When these genres began to reach the mainstream, the market for old 808s and 909s exploded, with units changing hands for thousands of pounds and every sample library worth its salt contained hundreds of 808 and 909 samples.

At the same time as the 808 and 909 were enjoying their belated popularity, sample-based drum machines that used preloaded drum sounds were growing in number and sophistication. As already mentioned, this breed of drum machine was spearheaded by the Linn LM-1, released in the same year as the 808.

Designer Roger Linn soon followed this in 1982 with the LinnDrum, before embarking on the development of the Linn 9000, a combined sequencer and sampler built into a drum-machine-like casing adorned with trigger pads and controllers. Unfortunately, the 9000’s original operating system was flawed and bug-ridden and despite Linn’s attempts to rewrite and optimise the code, the machine’s reputation for unreliability was sealed. Its failure contributed to the demise of Linn Electronics in 1986.

But Roger Linn wasn’t defeated and began a collaboration with Akai that allowed him to focus on engineering and design, while leaving Akai to worry about manufacturing and marketing. The fruit of that collaboration was the seminal MPC60, which launched as 1988 came to a close. In many ways a perfected Linn 9000, the MPC’s bank of 16 touch-sensitive pads, portability, simple control interface and immediate results made it an instant hit.

One thing that made the MPC so popular was that it was perfect for sampling and sequencing loops and hits recorded from old drum machines like the 808 and 909, and mixing these with vocals and other samples. This created something of a virtuous circle between those old drum machines, the music that was being made on them and the MPC itself; this cemented the MPC’s place as the tool for producing certain branches of contemporary music.

That interrelationship is so strong that the MPC series survived the advent of the DAW age which has generally resulted in the drum machine and sampler market becoming much smaller. Akai’s MPC X is, among other things, the most advanced drum machine ever made.

For more studio tips and tricks, check out our essential guides page.