The Bluffer’s Guide To Reverb

This month, it’s the turn of reverb to get the bluff treatment. Rob Boffard looks at the sometimes mysterious art of creating virtual spaces for your tracks Reverb is an odd one. Once you hear it you know exactly what it is and what you could use it for, but it’s actually quite difficult to […] 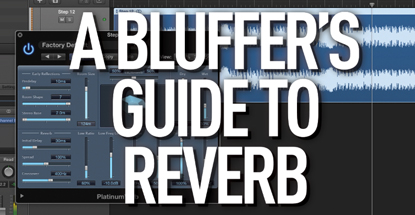 This month, it’s the turn of reverb to get the bluff treatment. Rob Boffard looks at the sometimes mysterious art of creating virtual spaces for your tracks 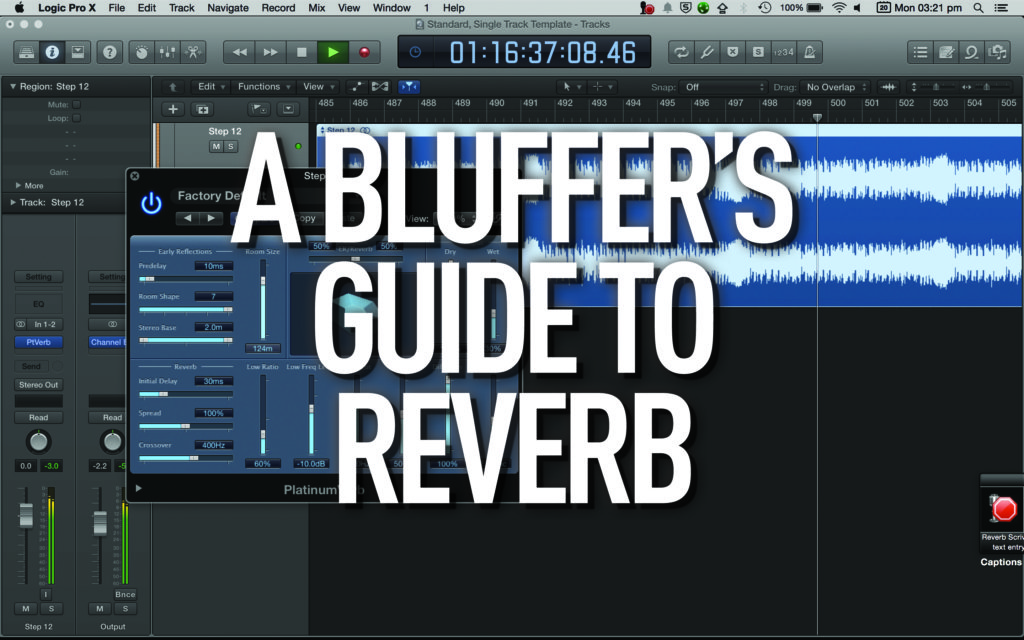 Reverb is an odd one. Once you hear it you know exactly what it is and what you could use it for, but it’s actually quite difficult to explain on paper. We’re going to try, though, as that’s kind of the reason we’re here.

Reverb is an effect whereby reflections of the sound bounce back at you off assorted surfaces. Unlike echo – where you can clearly distinguish the original sound being repeated – the reflections in a reverb situation give a long ‘tail’ to the sound, blending together until they fade away. If you’ve ever made a loud noise in a church, you’ve heard reverb.

Space Odyssey
In a music-making situation, you use reverb to give your sounds a sense of space. By doing this you can make the sounds seem richer, more powerful and more likely to be distinctive. Like almost every other effect it’s best when used in moderation, but when you think about it, digital reverb is kind of amazing.

You’re essentially taking a sound on your computer and locating it in an imaginary physical space. It’s the closest music will ever come to genuine teleportation, and we think it deserves a closer look. 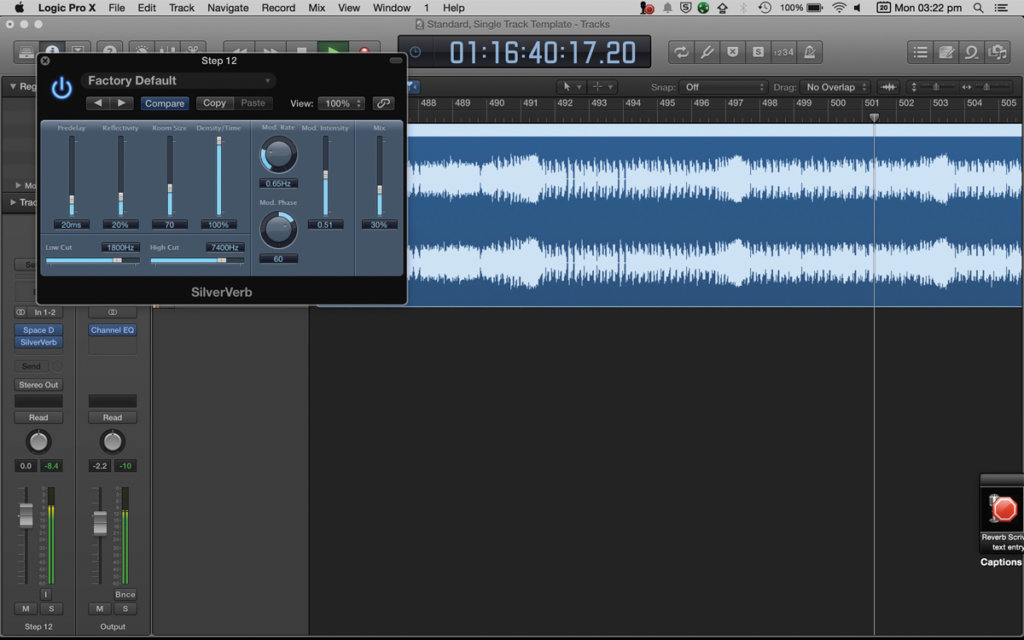 In the plug-in screenshot above, you can see the low-cut and high-cut filters, which will help shape the sound of our reverb.

As with every other entry in this series, the best way to learn is by doing. So open up your DAW and load a reverb plug-in onto a track, and we’ll take a look at some of the more common controls, which will show us how to use a bog-standard reverb.

What’s important to grasp here is that you are digitally trying to recreate the sound of a space. As such, you will use two main controls to design it: size and damping. Size is pretty self-explanatory – you’re simply choosing how big or small your environment is. A bigger space will equal a much more noticeable reverb, such as the church example we mentioned earlier; a smaller space will have a much tighter reverb. In the right circumstances both of these – or something in the middle – can be extremely useful.

Damping is tricky. Essentially, you’re telling the reverb plug-in how absorbent the surfaces in your imaginary space are. If you want to see an illustration of this, it’s really quite simple. Stop reading, stand up, and go to the bathroom. Go on. We’ll wait. On second thought, take us with you so we can relay further instructions.

When you get there, clap your hands. The sound you hear coming back to you is because of the multitude of flat, hard surfaces, which are great at sending back almost all the sound you throw at them. Now imagine if every surface in your bathroom was covered with foam. Chances are you wouldn’t hear that sharp, metallic clap coming back at you. That’s damping – a measure of how absorbent surfaces in your space are.

By carefully controlling these two parameters you can create a huge number of different spaces. Some plug-ins incorporate other controls, such as pre-delay, which inserts a small delay (usually measured in milliseconds) between the original sound ending and the reverb starting, and can be very useful if you’re trying to craft an exceptionally large space. They may also have low- and high-cut filters to help you shape your sound and stop it getting too harsh, which reverbs are sometimes prone to do.

The final control to pay attention to is arguably the most important: mix. Sometimes also called the ‘wet’ control (as opposed to the dry audio that is your original sound), it’s something you really don’t want to push hard. Even for extremely noticeable reverb effects you shouldn’t be applying it beyond the 10-20% mark. 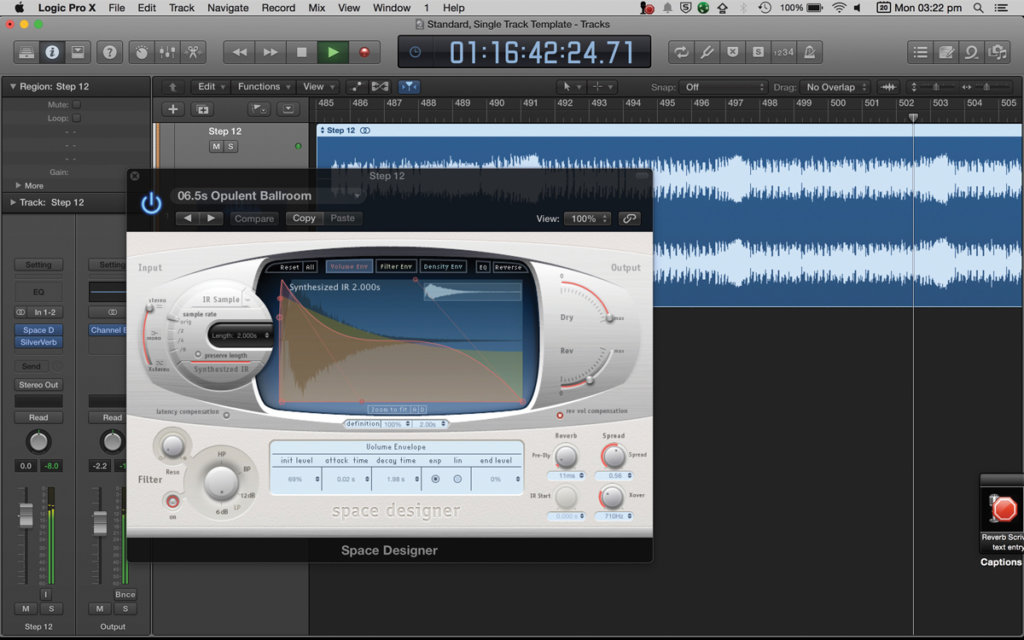 By putting a reverb through noise gate you can create the effect known as gated reverb.

Spring into Action
Reverbs have existed for a long time – a lot longer than computers have been around. In the early days of recording, engineers used physical objects to create the sound of a particular space. Going into the details of this can get a bit technical, but they found that passing a sound through coiled springs or large metal plates introduced reverb to it. This idea survives to this day.

Reverbs don’t just come in one flavour; you will often see different types which, yes, include the terms spring or plate. Each of these reverb types has different characteristics, and you’ll want to think quite carefully before using them on specific sounds.

Spring reverbs are known for being quite sharp and bright. This makes them ideal for things such as vocals and guitars – when used in moderation, of course. Spring reverbs are also used quite often by sound designers looking to flesh out their creations. Unfortunately, they don’t work too well on
percussive sounds.

Plate reverbs are a little bit different. They don’t have any early reflections – or reflections that define the sound of the reverb – and so in the wrong circumstances they can often seem quite muddy and indistinct.

But their advantage, musically speaking, is that they don’t recall a specific space, which means that for regular, everyday use they’re perfect. If you need to put a tiny bit of shine on a sound without having things being too noticeable or obtrusive then plate reverbs are the way to go.

Now that’s Magic
Those are the two main types of reverb that you’ll find, but there’s one more worth mentioning: convolution reverb. Plug-ins that use this type of reverb are typically expensive and heavy on your CPU, and with good reason: what they’re doing is pretty much black magic.

Convolution reverbs don’t create a virtual space, they take the characteristics of a real, existing space and apply it to your sound. This is done by taking a microphone into the space and capturing what’s known as an impulse response. Feed this through some serious modelling algorithms and you have a digital representation of the reverb qualities of that space.

What this means is that if you really want to make your drums sound as if they were played in the middle of Notre Dame Cathedral, you can – there exists a convolution reverb preset to let you do this. Like we said: black magic.

In the Mix
You might reasonably ask how you actually go about using these techniques in your songs. The most effective way is, as we’ve said, to use reverb subtly. A touch of spring ’verb on your vocals can give them presence and life; a little on your drums can make them sound as if they are right there in the room with the listener.

You need to be careful, though, as reverb used in large amounts, and particularly on the low end, can make your mix extremely muddy. But really, reverb is an incredibly useful tool.

There’s also an amazing amount of creative ways you can put it to use. There is a technique known as gated reverb, used by Kanye West, Phil Collins and Radiohead, which can be a lot of fun to play around with. 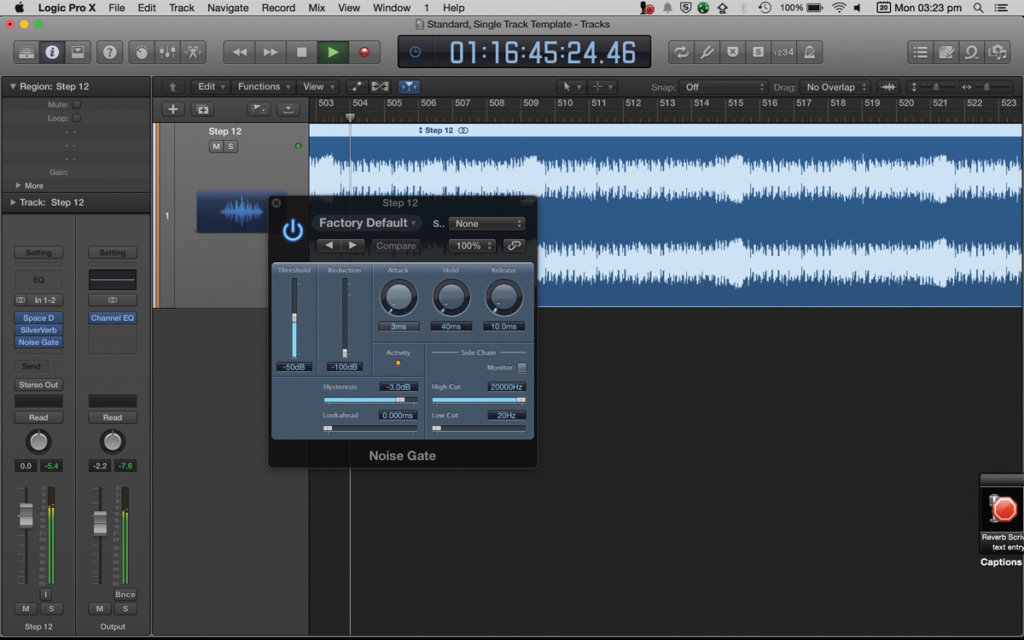 Space Designer is a convolution reverb, meaning that it relies on real spaces to create its effects.

By sending the reverb signal through a gate plug-in you can make it cut off whenever the original sound ends, which is an immensely cool effect. Or you could try giving a set of vocals a long reverb tail, bouncing the sound down, reimporting it, reversing it (stay with us here), chopping it just before the main sound starts and tacking what’s left onto your original sound. Try it. It’s fun.

As for which reverb to pick… well, you have your work cut out for you. Every DAW on the market will have its own built-in reverbs, of variable quality. The ones included in Logic, for example, are brilliant. They include the excellent Space Designer plug-in which, while taking a little while to get to grips with, is an absolutely superlative way to design a reverb.

It’s well worth spending a little bit of cash on getting a quality reverb plug-in. You’ll use it again and again, and it can really add a professional sheen to your tracks.