Beginner’s Guide: Everything you need to know about virtual instruments

We look at the range of virtual instruments available and how to utilise them. 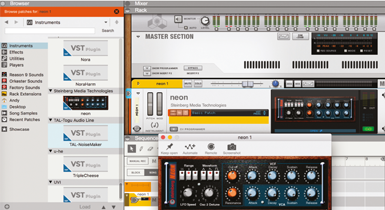 Virtual instruments have become a key part of music production in the 21st century. They can replicate any ‘real’ instrument – guitars, drums, pianos and so on – from the outside world, or even come up with futuristic or fantastical sounds by way of synths, or huge libraries of otherworldly sounds.

Best of all, you don’t need the physical skills to actual play the instruments they recreate, as you can simply trigger their sounds via a keyboard controller or even your computer keyboard – a complete virtual orchestra at your fingertips!

Plug-in to plug in

As processor power increased, a huge number of more complex virtual instruments started appearing, with more emulations of ‘real’ instruments – that is, guitars, pianos and other acoustic instruments – and more complex synthesisers, which could eventually do things in the virtual environment never dreamt of in real life.

More and more companies appeared and produced excellent emulations and fantastical instruments. Arturia, Native Instruments, GForce, Fabfilter, U-he, Spectrasonics, UVI, Rob Papen, Waves and iZotope, to name but a few – all of these have produced incredible and notable plug-ins. More recently, Spitfire Audio, Toontrack, Big Fish Audio, Melda, Heavyocity, Output, and Best Service are part of a newer breed of companies producing ever-more-complex instruments and sample libraries, which can be controlled and recorded within your DAW. They offer everything – from simple guitar strumming to elven singing; from an emulation of a theremin to an emulation of a £100,000 grand piano – all playable within your laptop.

A thriving freeware scene has also emerged, where people developed their own instruments for everyone to use, free of charge. Now, there are literally thousands of them available for you to download and use in your DAW. They represent a great way to get into music production, as you can find everything you need to make complete tunes without spending a cent. MusicTech runs regular freeware roundups, so be sure to check out our next one in a few issue’s time, or check out the best freeware at www.musictech.net.

Virtual instruments in a DAW 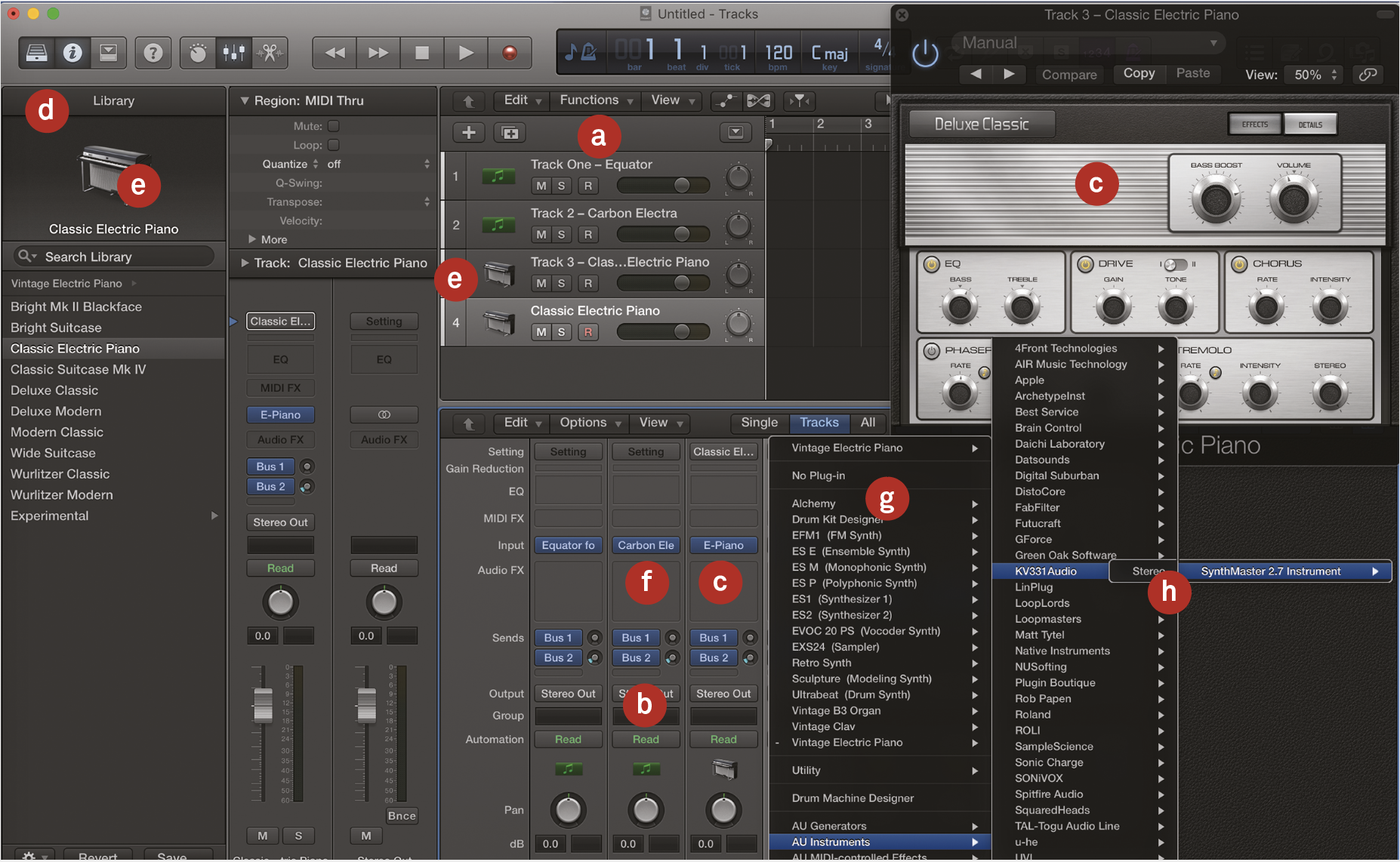 The tracks of the DAW, in this case Apple’s Logic, are shown top to bottom. Here, we have four tracks assigned to different virtual instruments

Most DAWs have virtual instruments bundled with them, so you can use them alongside third-party ones. Here, we’ve used Logic’s Electric Piano, which is also open on-screen

DAWs that come with their own plug-in instruments will have a library (in this case) or a browser, which you use to select them

For third-party (external) plug-ins, click on the input channel on your mixer to change the instrument that’s supplying the sound to that mixer channel

In Logic’s case, this will open up a drop-down menu offering you the choice all of the instruments that you have installed in your plug-ins folder

In this case, you choose by name. In some DAWs, plug-ins can be searched for, especially useful if you have a lot of them in your collection

We’re going to delve into the murky world of virtual instrument formats now. You’ll see that all major sequencers have their own formats for virtual instruments, but the good news is that there’s now increased cross-platform compatibility, so that plug-ins developed for one DAW can now work in another. Also, most plug-ins are developed for the main formats – so when you buy one, you simply choose and install the format that works within your DAW.

You can, then, choose to skip to the next paragraph without fear of missing anything, but we’ll give you a run through of the main formats anyway. The VST format is arguably the most common one, and was developed by Steinberg to work in Cubase on the Mac and PC. However, DAWs such as Ableton Live, Studio One, FL Studio, SONAR and now Reason (see the tutorial later in this feature) support the VST format, so will run all VST plug-ins.

Other DAWs plug-in formats include Reason’s Rack Extensions (many third-party companies have developed for this format and Reason also now runs VSTs); Cakewalk’s old DirectX format (it runs VSTs, too); and Mark Of The Unicorn’s MAS (MoTu Audio System) format for Digital Performer (which also supports AU and VST).

Finally, there are several players that act as shells for multiple third-party companies to run their plug-ins within, but also work like plug-in instruments within the major DAWs. Native Instruments developed Kontakt, which generally deals with instruments that are more like libraries of sounds. It’s a shell that allows you to play these libraries, many of which are developed by other companies (although NI arguably has the best complete set of instruments, in its Komplete Ultimate collection). See above for more on the Native Instruments Kontakt environment.

Which leads us nicely to the very definition of ‘instrument’ versus ‘sample library’. Many of the instruments we review in MusicTech are essentially huge collections of audio samples – check out the orchestral ones in our Buyers Guide later for some prime examples of these.

There‘s some argument over whether these are true instruments, or simply gigabytes of audio – indeed, some companies insist we refer to their collections as libraries, rather than instruments! However, we still count them as instruments, because they will very often be playable within a shell like Kontakt or the UVI Player of Best Service’s Engine.

While instruments that process their sounds without needing to access huge amounts of data are sleeker and less cumbersome, when all’s said and done, you can play and record music using all of these systems, so we’re not precious in terms of definitions. In short, any piece of software you can play, manipulate and record within your DAW or even standalone is a virtual instrument in our book, so we’ve included them all. 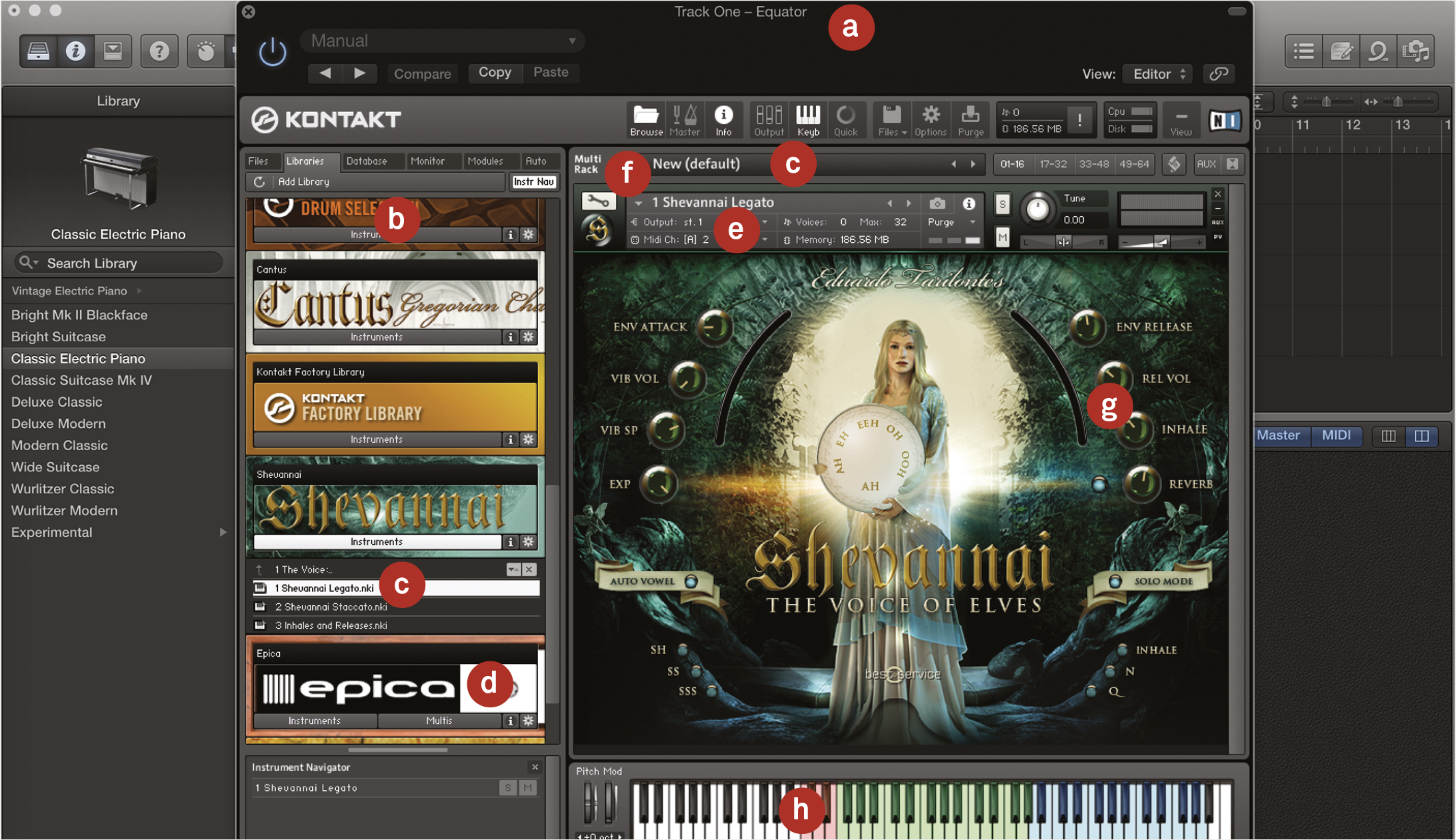 A) A normal instrument
Some companies have devised ‘shells’, which host other instruments but load as a ‘normal’ virtual instrument within your DAW. Here’s Kontakt…

B) The library
Native Instruments’ own library of instruments appears here. Whenever you add third-party, Kontakt-format instruments, they also show here

C) Presets
Open the presets within each by clicking the folder icon and then browsing through the sounds. They’re often complex sounds and they may take time to load

E) Ouputs
If you have multiple instruments loaded from your library, it’s a good idea to assign them each a different output… unless you want a huge sound, that is

F) Other parameters
Lots of other parameters can be adjusted – from the main volume, solo and mute to more detailed features within a tools menu

G) Controls
Each instrument you load into Kontakt usually has its own sound-shaping controls, from simple effects through to full-on synthesis options

H) Komplete kontrol
One of the beauties of the Kontakt environment is that it can be married to Komplete Kontrol hardware, which duplicates a lot of the features in hardware for easy control over the software

And so we reach the world of the plug-in instrument today – and it’s a world full of great instruments, consisting of many different kinds and types. We’ve broken it down into some main categories in our Buyers Guides, including synths, real instruments and orchestral tools. The synths are either emulations of classic pieces of hardware, or completely new instruments.

The ‘real’ instruments cover anything from acoustic pianos to xylophones, while the orchestral tools very often put every instrument in an orchestra at your fingertips, while aiming at different styles of music including cinematic and classic.

To be honest, we could go on and on – as there are other categories to consider, including percussion (we have a Beats Special feature covering those, beginning on p8 of this issue) and even within the categories we’ve chosen, there are hundreds – if not thousands – more options worth exploring. The virtual world is a huge and ever-evolving world of musical possibilities, but our selections will give you as good a starting point and introduction to it as any.

As to the future of the virtual instrument? Expect to see more cross-compatibility, so that every instrument will be available on every platform. There will also be a greater degree of hardware involvement, as people still love the feeling of turning real dials and knobs rather than using a mouse. There will be more integration with hardware controllers and we’ll continue to see hardware inspired by software, like the new Teenage Engineering Pocket Operator 32, which takes its inspiration from Sonic Charge’s Microtonic software (reviewed on p80). Whatever happens the virtual world is an ever more exciting one, so dip in, enjoy and make great music.