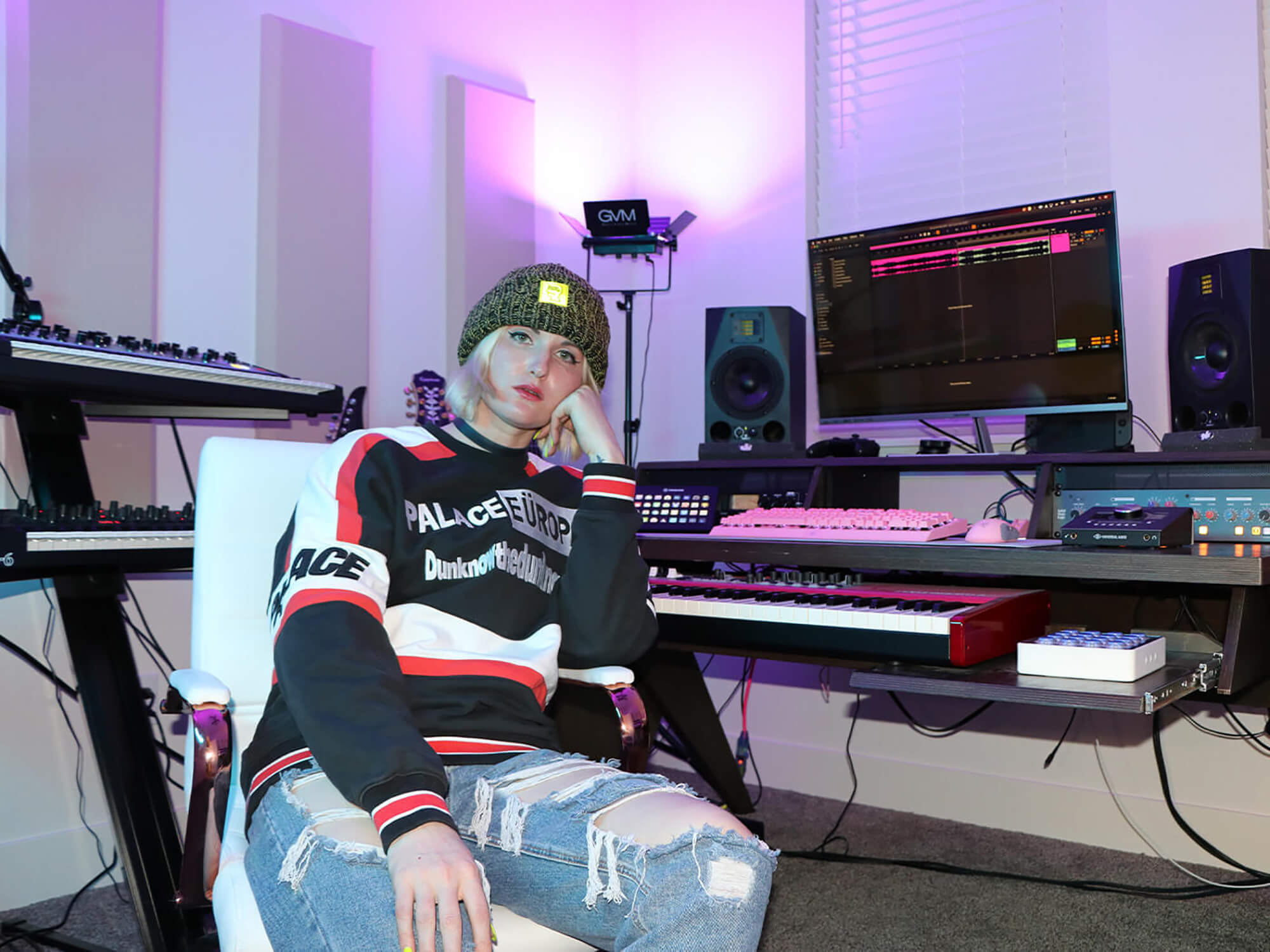 From plush studios to bedroom workshops, these producers know that creative spaces can vary. Here are their tips for making the most of whatever you have.

Our Show Off Your Studio series provides fascinating insights into the workflows and creative processes of professional producers and music-makers, as well as invaluable tidbits for building and maintaining studio spaces. Over the course of the series, we’ve learnt what instruments make our interviewees tick, how studio spaces enhance their creativity, and what gear they’d take to a desert island to make music with forever.

Here, we’ve rounded up our favourite studio-building advice from the most prominent names in the series. If you’re setting up a studio, take heed of these pointers. 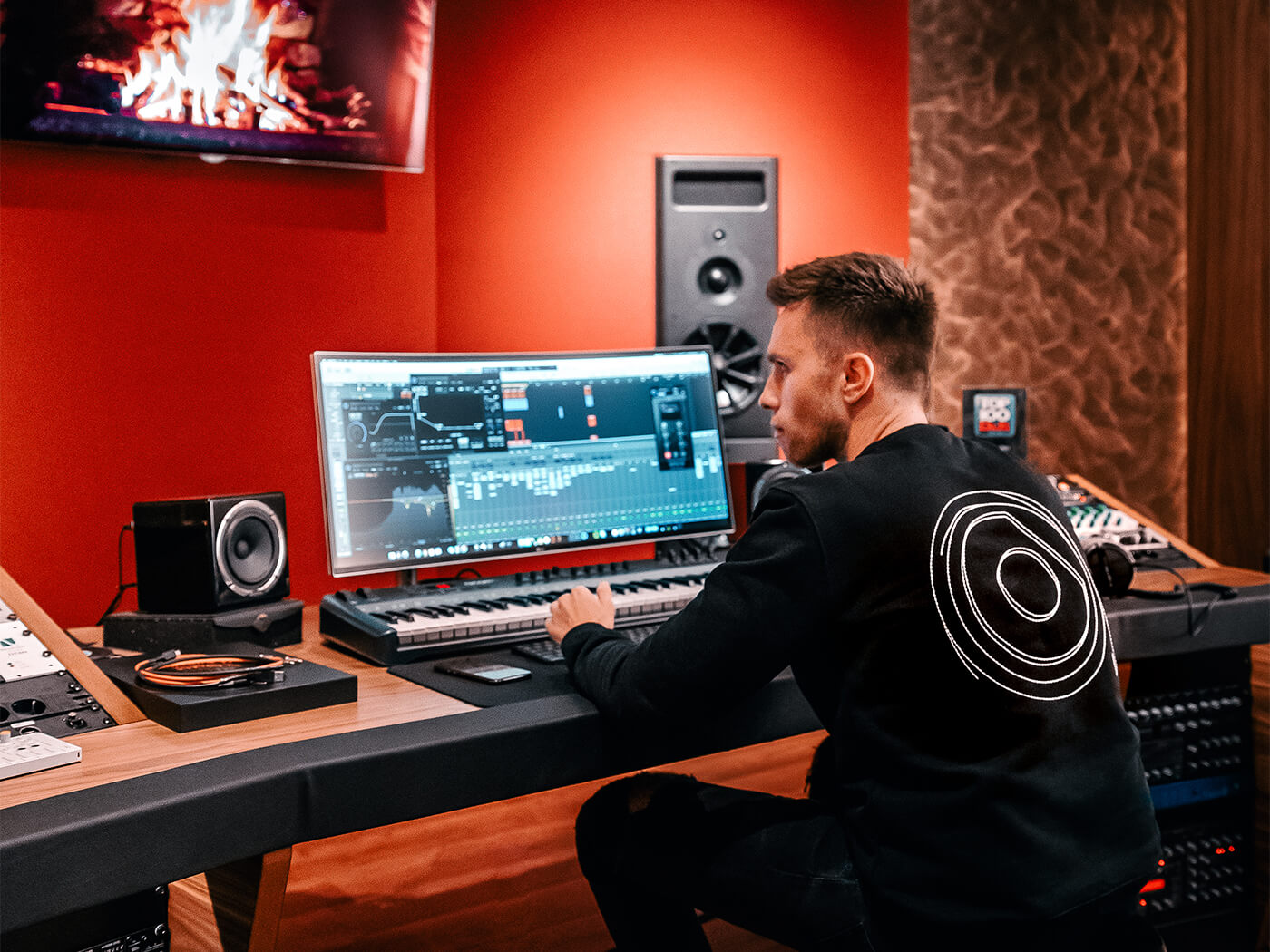 With its enviable mood lighting, extravagant gear and lush decor, superstar EDM producer Nicky Romero’s studio is killer. But despite its aesthetic appeal, his priority has always been acoustic treatment and getting used to his sound system.

“Producing music and mixing is always about making decisions, and the acoustics and speakers helped me gain more confidence in that,” he told us

“In my older studio, I was going back and forth tweaking the mix, testing it in the car or at clubs, and finding out it just wasn’t there yet. Then I’d go back to the studio to try and fix it, which would cost me a few days, even weeks. Now with the new acoustics and speakers, I just know that once it sounds good in my studio, it will sound good everywhere on any sound system.”

He adds: “A set of speakers can be easily replaced but you only have one chance to get the acoustics right. Also, think about wiring some extra cables behind the walls, as you might want to add some stuff in the future. Wiring after the acoustics are done is going to be a pain in the ass.” 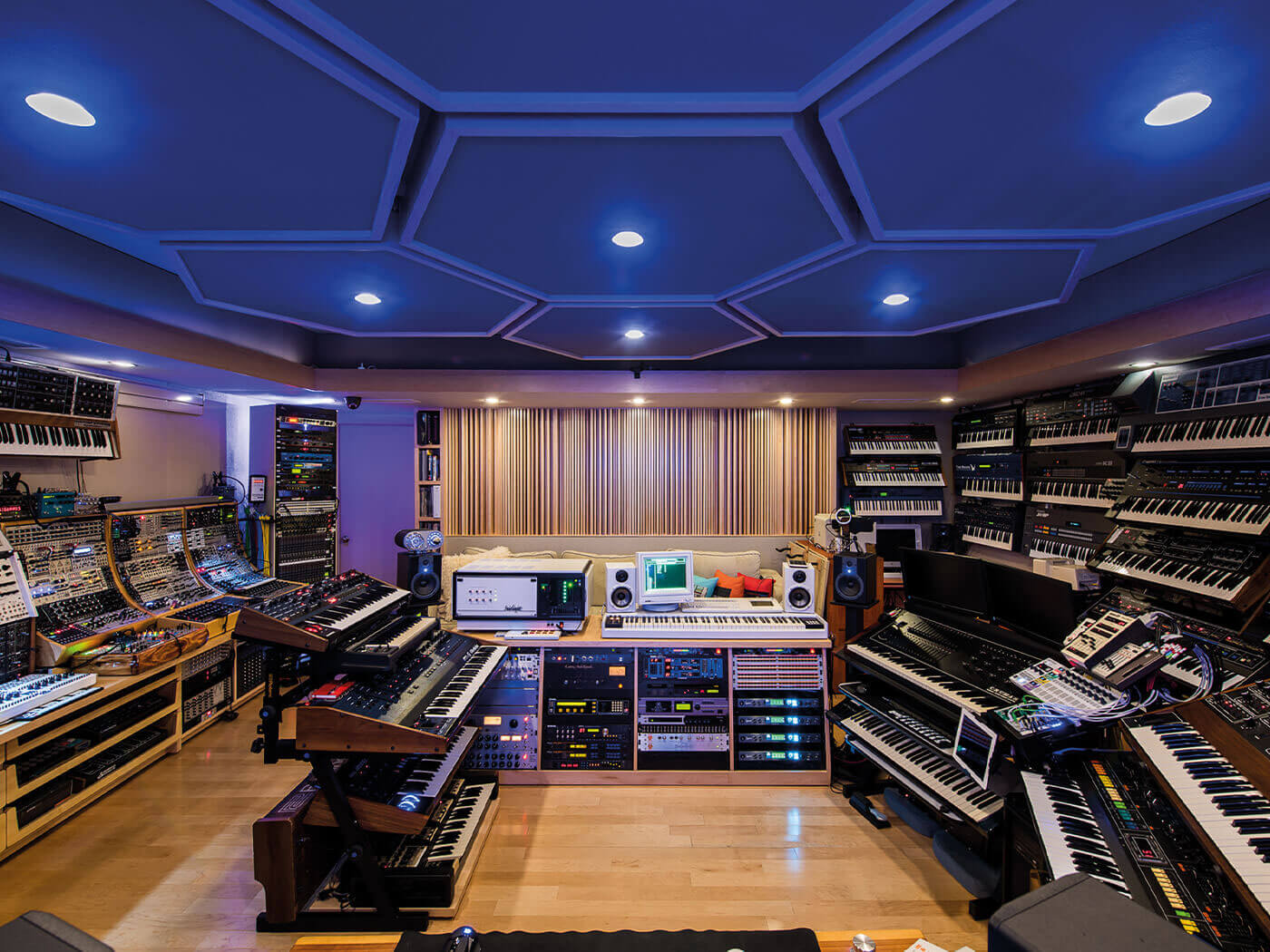 For trance and melodic-house pioneer BT, quality is paramount. That means ensuring your audio input and output stages are of the best possible caliber, and keeping noise levels in the space at a minimum.

“Focus on the quality of your audio interface, your speaker placement and your room treatment above everything else – and go for some nice vibey lights too,” he told us in.

“It’s quiet in this studio. I can finally hear what’s happening without any nodes or colouration from the room. It makes mixing fun. It was one of my biggest pain points my whole life. I have PTSD from key drives and burning CDs to listen to on headphones, in the car and everywhere else. It’s an amazing process, with less second-guessing and more instinctive movement.”

Imagine Dragons’ Wayne Sermon knows that it’s not all about hardware, and consciously limits how much emphasis he puts on gear while producing. His advice? Don’t seek out the highest-end outboard. Instead, focus on getting the essentials locked in.

“With the important pieces you’ll use every single day: buy it right the first time,” he said.

“I worry less about gear and more about the song. And believe me, I’m as big of a gearhead as you’ll ever find. I just try to remember that this stuff only exists so that it can help a song transcend ‘stuff’ altogether. That element should never hold anyone back. The things people can make on just a single laptop is insane. Just listen to anything Tennyson makes for proof of concept.”

TĀLĀ may be based in the UK but she’s made her studio flexible enough to take anywhere she wants. We caught up with her after collaborative music-making sessions in London, Poland and Los Angeles with BANKS and Lunakai. For TĀLĀ, it’s all about paring back.

“Start simple and with equipment that is fun and inspiring,” she said. “Use the DAW that feels most fun to you. Ask advice from peers about what they recommend but remember it comes down to you and what you most enjoy. 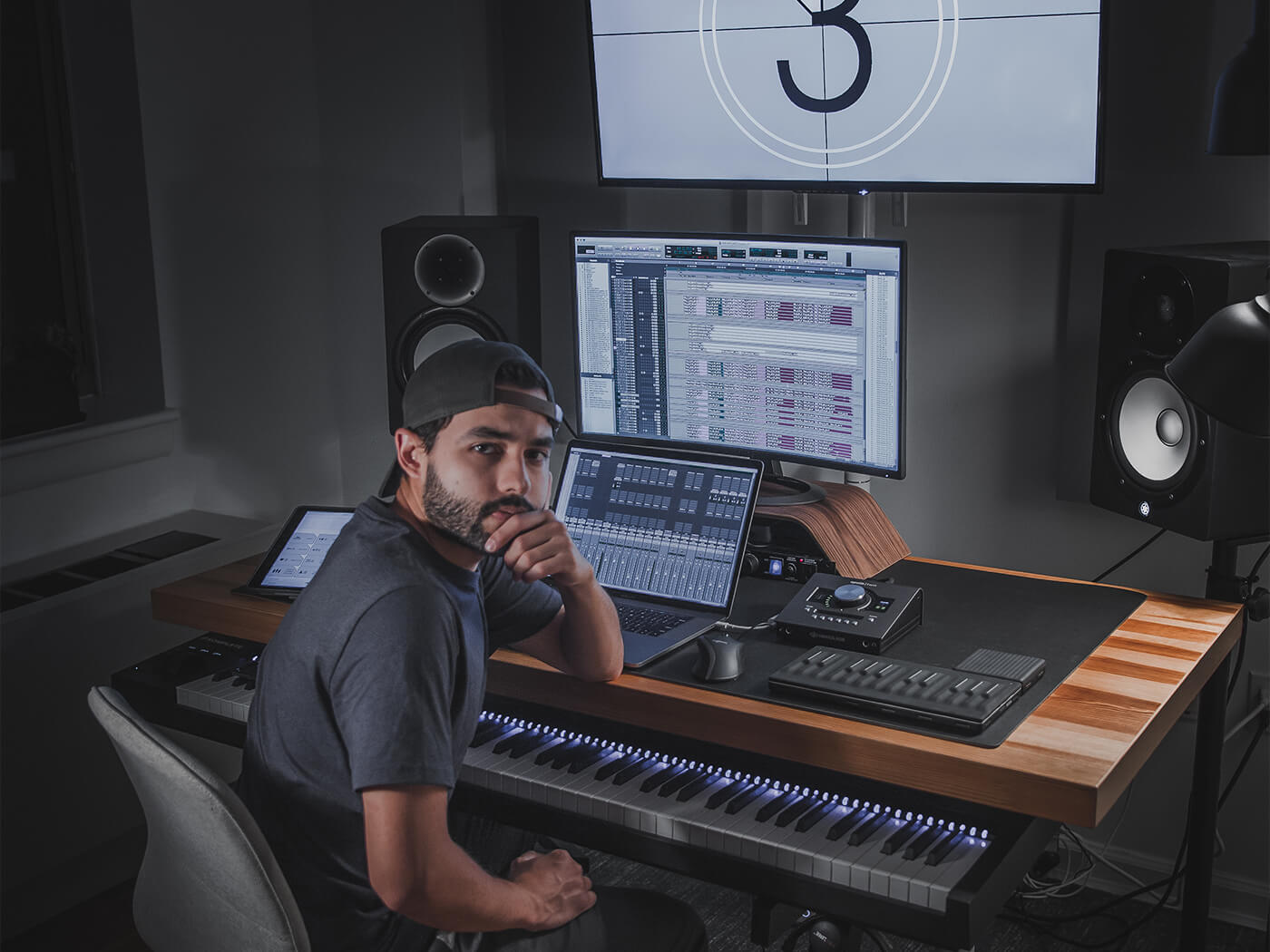 Score composer Juan Dussán has one of the most beautiful minimalist studios we’ve ever seen. Located in his New York apartment, the space benefits from Juan’s acoustic considerations and efficient setup. For him, it’s all about minimising technical issues and maintaining a creative flow.

“Try to learn as much as you can about the room acoustics, technology and sound,” he said. “This will come in handy when you need to set up your workstation.”

He adds: “With my previous setup I couldn’t keep up with my own creativity. I was fighting against poor tools and an inferior setup. If I spent three hours working, at least half that time would have been trying to fix the technical issues. I gather inspiration from within. The neat, organised and well-lit workspace provides me with a clean palette. My writing sessions are more productive and I have found that, when I am happy in my own space, I have the energy to be a great collaborator.” 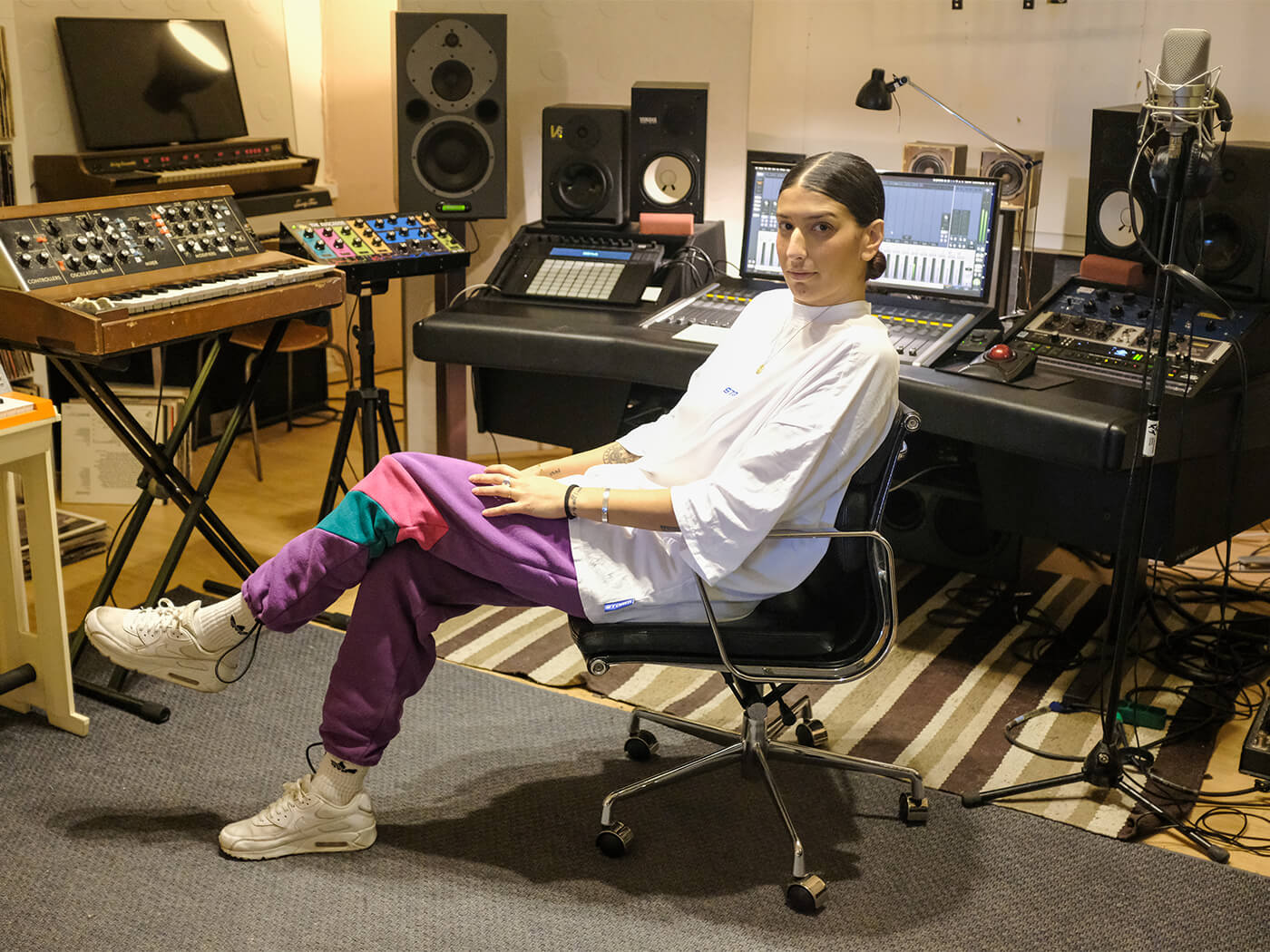 Denmark-based techno producer Ashibah wants to be in the right mindset when she’s in the studio, and when friends visit, they should feel comfortable too. Lights, decor and French wine seem to do the trick for her – and how could it not?

“There are many ways to make music today,” she said. “Find the setup that works for you, no matter how big or small, and don’t get intimidated by what’s out there.”

She adds: “It’s important for me that my studio isn’t only a place for work but that it has a cosy and positive vibe so you want to stay and hang. I spent a lot of time getting the right lighting and setup so anyone can feel at home.” 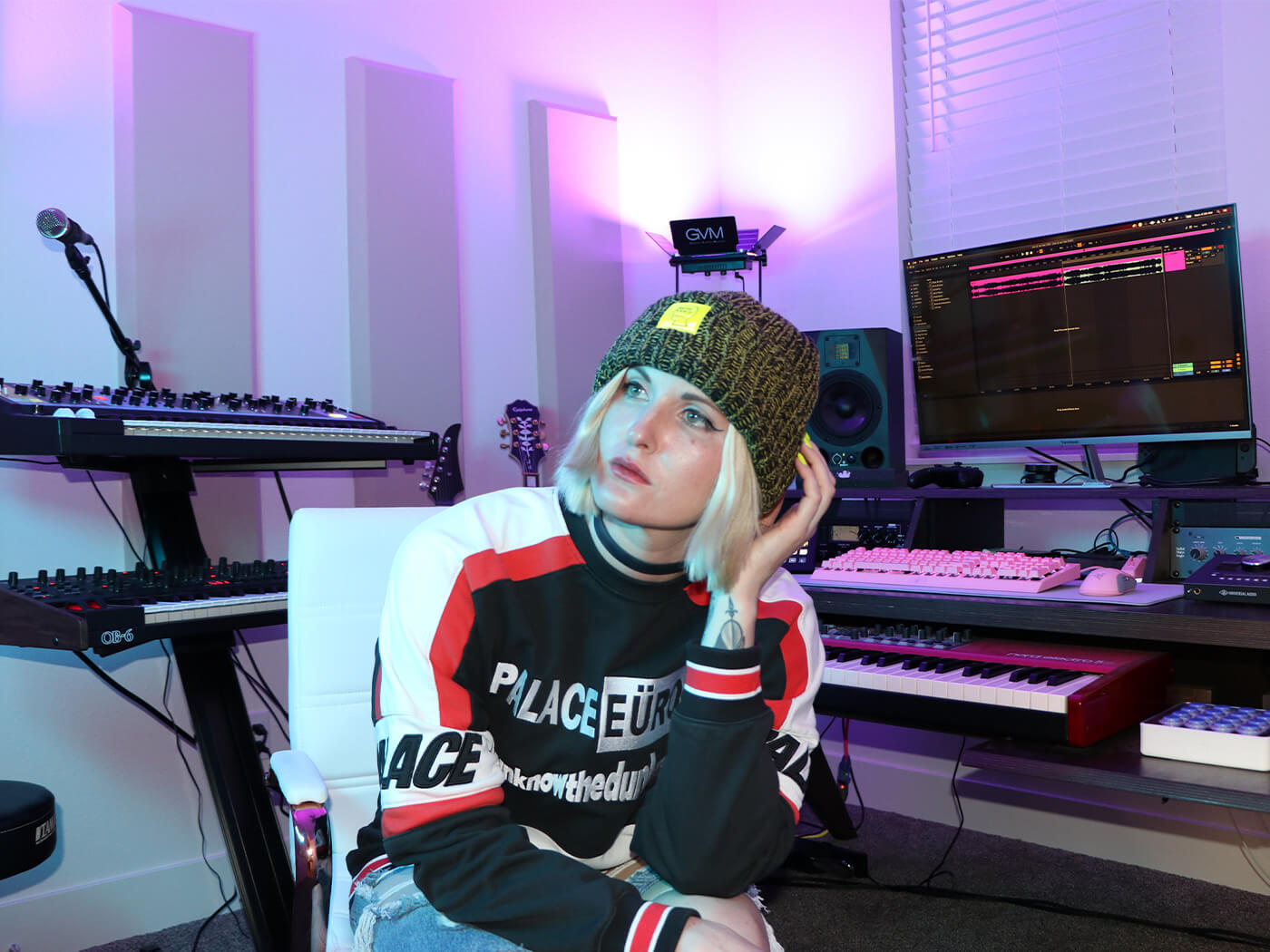 Producer, mastering engineer and label owner Dot has been making waves in electronic music as of late, garnering support from the likes of Dillon Francis and TOKiMONSTA. But she’s acutely aware of GAS – Gear Acquisition Syndrome – and the complexities it can present. Instead of buckling under the pressure to buy, she said, take time to consider your studio purchases and, if you can, test them before dropping the cash.

“Try things out before purchasing, whenever possible, and never impulse-buy,” she said. “Gear selection is such a personal choice, and reviews can be misleading when trying to make your decisions. I think that slowly going piece by piece and building over time will result in a much better studio for you personally than feeling pressure to buy everything on your list at once.” 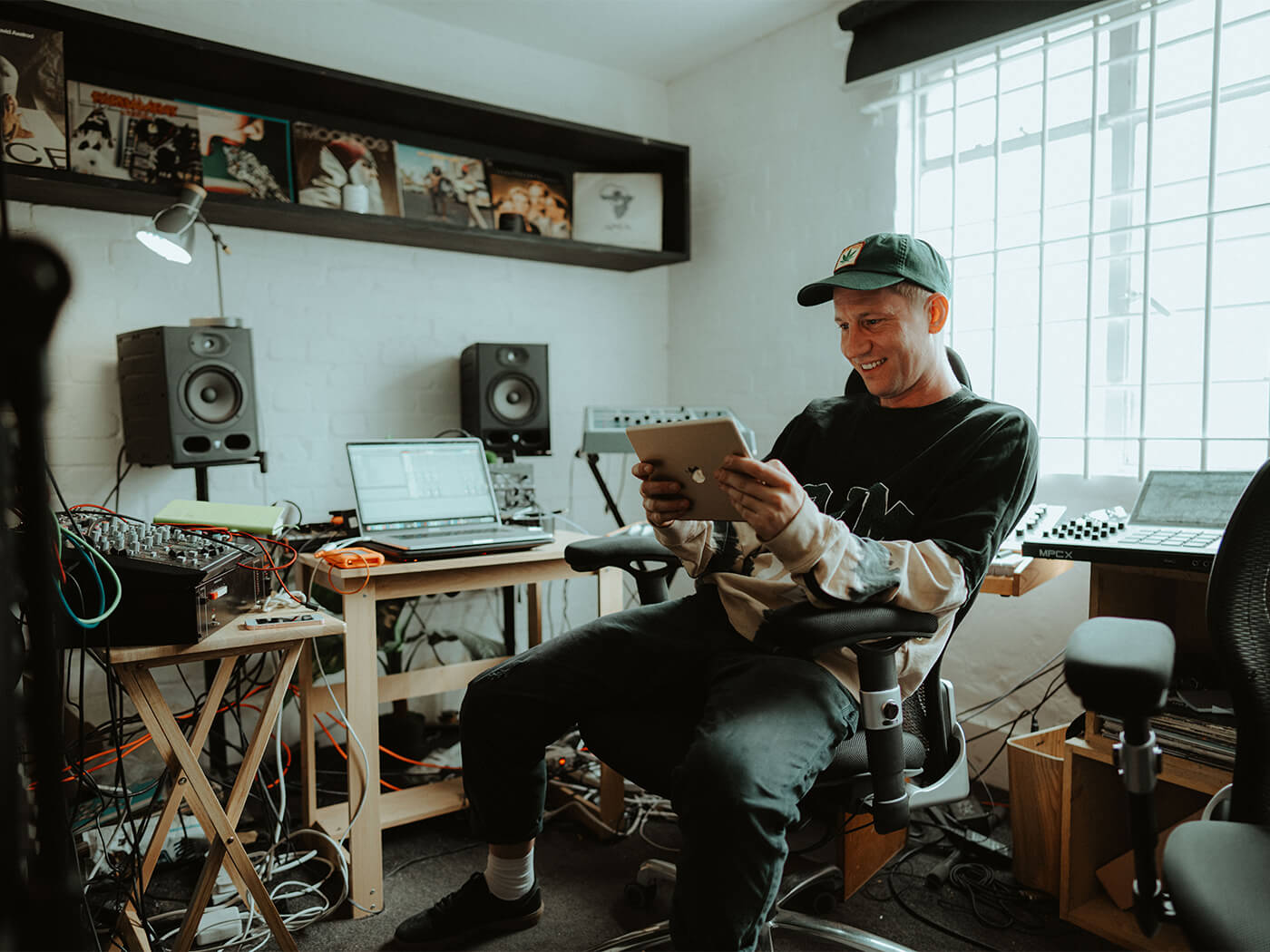 With Grammy wins, number-one hits and collaborations with superstars that include Dua Lipa and Diplo, you might expect Riton’s space to be lined with extravagant gear. That’s not the case. Despite his impressive collection, Riton loves software. He recommends diving into iOS apps before splashing on expensive hardware.

“Get an iPad and have a play around on it,” he said. “iPad music apps are very powerful for creations so that is a great place to start for very cheap. See if you’re really into production before you go full-on investing.”

He adds: “I normally go a bit mad on equipment but now I’m into all the modern gear coming out, which takes the old analogue gear and tweaks it for modern use.” 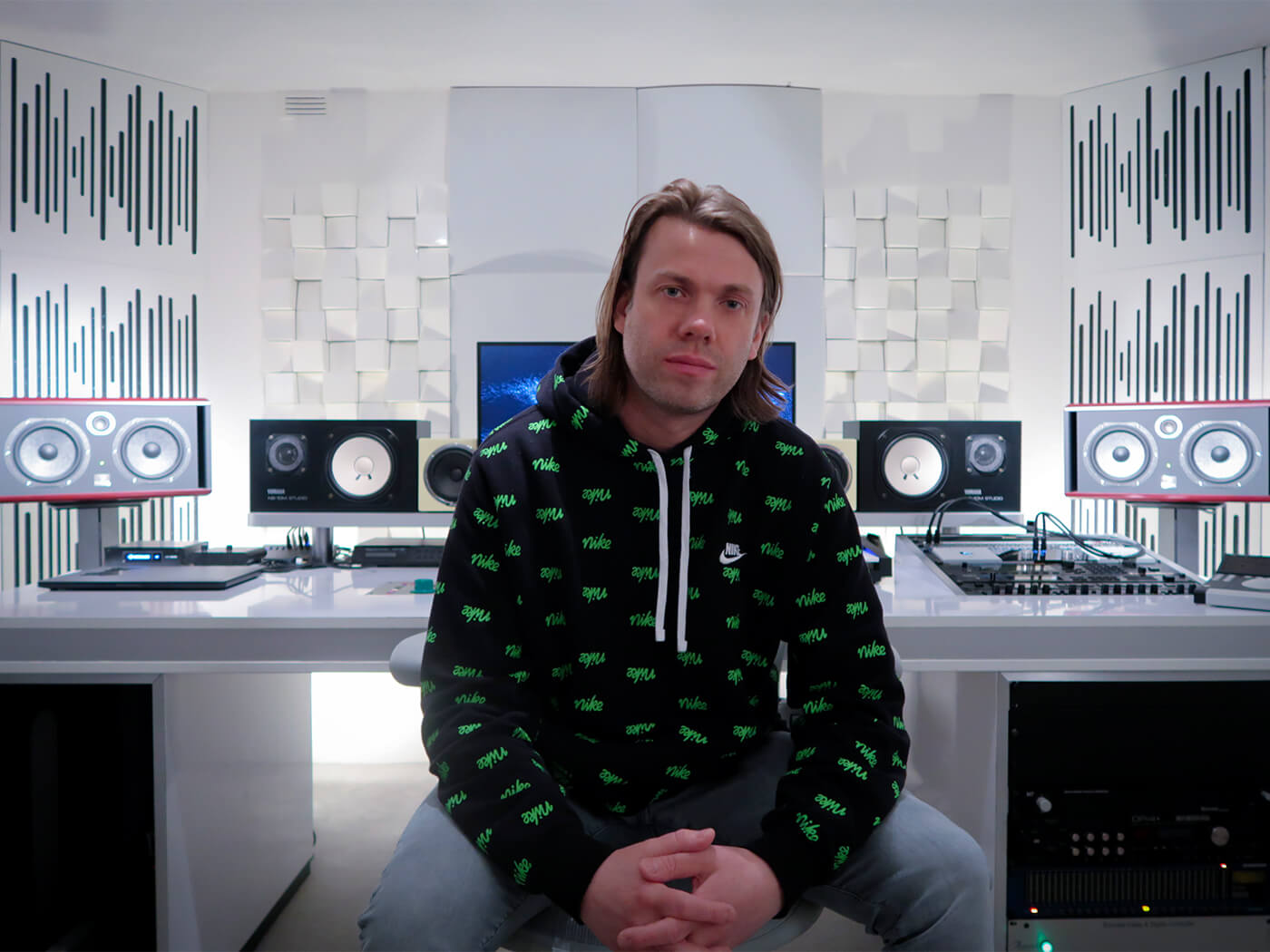 Chart-topping EDM act Bingo Players has a studio that’ll make your jaw drop. Real name Maarten, the producer has sleek decor, boutique hardware and even a video games room. But he and his late production partner, Paul, had humble beginnings, beginning with a budget mixing desk and minimal gear. Decades later, Maarten still knows that you can get pro-sounding results without massive expenses – so long as you know what to look for.

“Do your research and decide what is most important for you and your goals as a producer or musician,” he said. “You don’t need lots of cash to get a comfortable space.

“Paul and I started with a cheap Behringer mixing desk, an outdated soundcard and speakers that looked like they came from a Goodwill store, and we made our biggest songs on that gear. In the end, it’s about the music, not the tools you make it with. I know it sounds cliché but it’s true.” 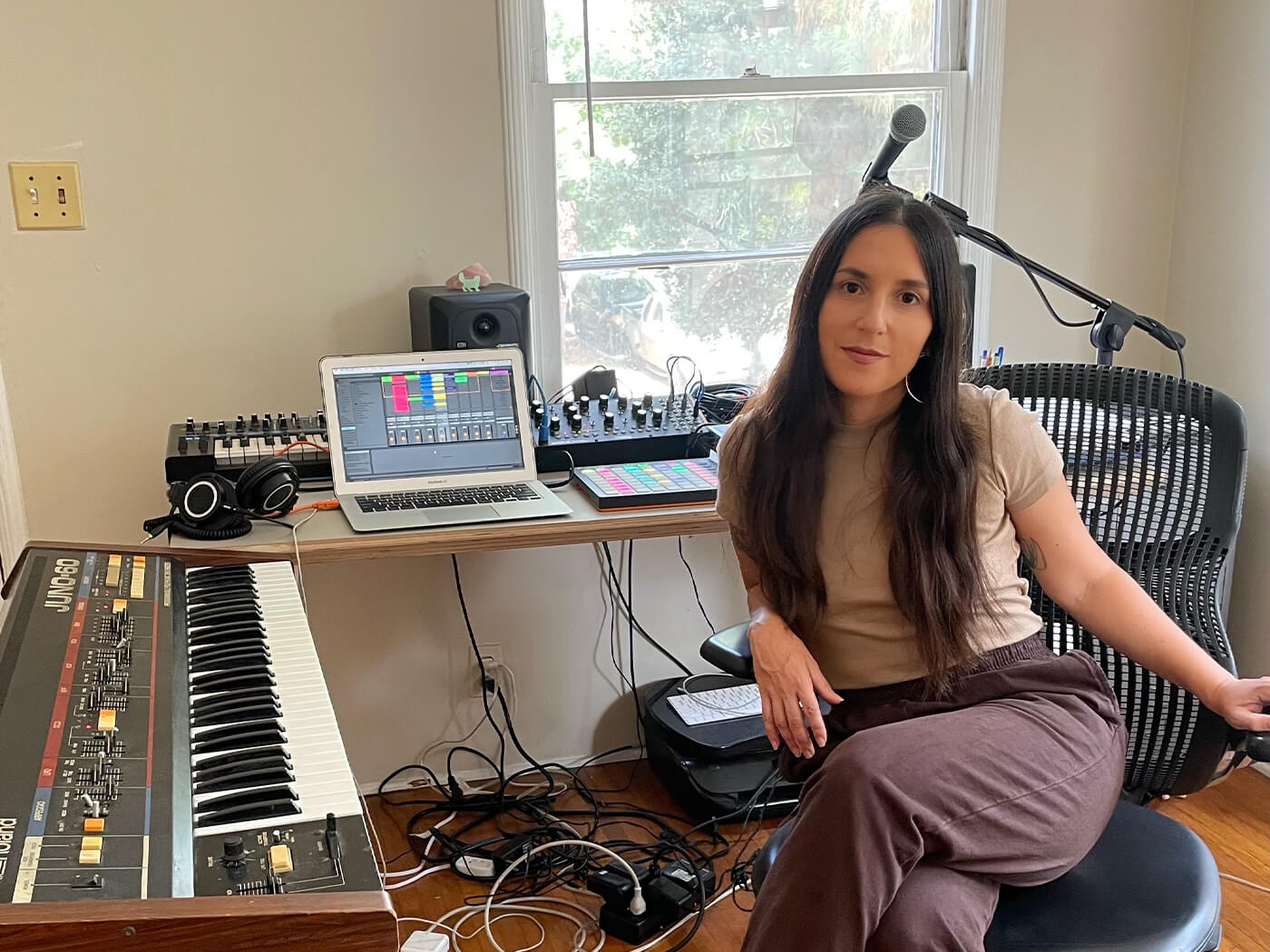 Among the first chillwave artists of the late-2000s movement, Nite Jewel owns a few classic instruments, including a Roland Juno-60. She focuses on building her studio around the productions that have inspired her.

“Research the records you love from the past and think about how they recorded things and what gear they used,” she said. “Build your studio based on that history, limit your tools. Also, it doesn’t matter what plug-ins you use if you have good ideas.”

She adds: “My studio is just my work desk. It’s located in the living room of my apartment, where I moved into six months ago and is meant to be simple and portable.”