Stuck in a programming rut? Hollin Jones explains how, with a little know-how, you can use MIDI programming to revolutionise your setup… 1: Explore your Options There are now more ways than ever to input MIDI into your software. The conventional keyboard is still the most common, but there are many pad controllers, MIDI drums and […] 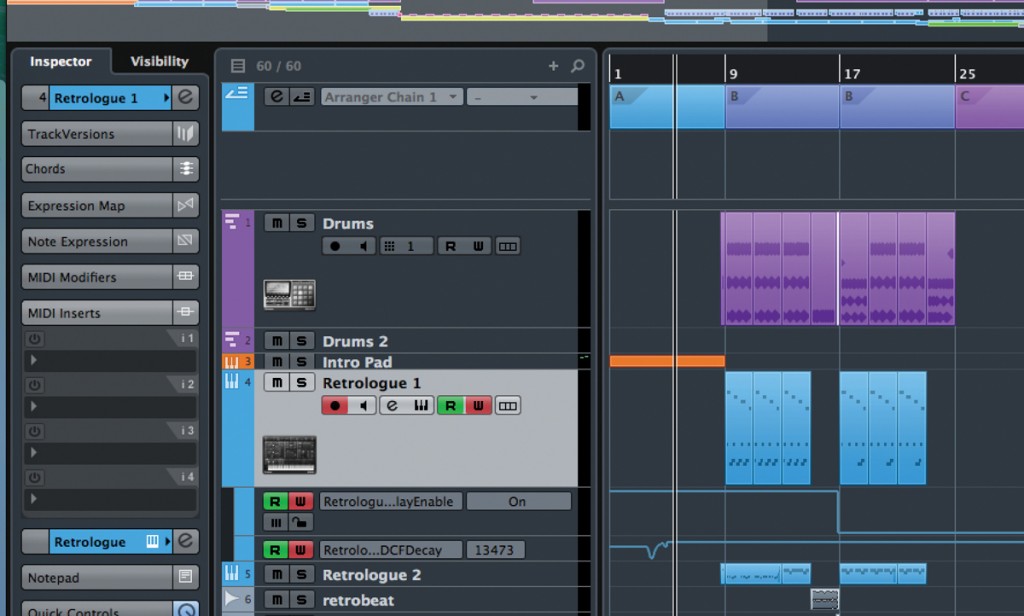 Stuck in a programming rut? Hollin Jones explains how, with a little know-how, you can use MIDI programming to revolutionise your setup… 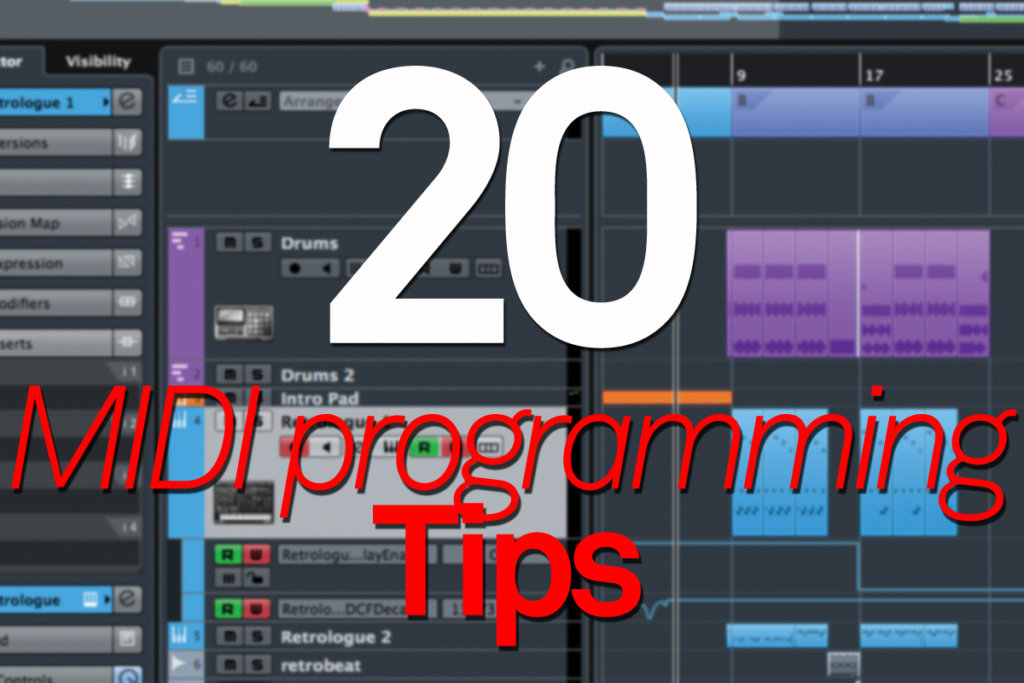 1: Explore your Options
There are now more ways than ever to input MIDI into your software. The conventional keyboard is still the most common, but there are many pad controllers, MIDI drums and advanced tools such as NI’s Komplete Kontrol keyboards with special MIDI modes to help you do more. Even if you’re just using a simple MIDI keyboard, MIDI insert effects inside your DAW can help to process simple input into something much more complex such as chorded or arpeggiated parts and also post-process existing MIDI parts just like you would with audio tracks.

While MIDI and audio are fundamentally different you can still do things like ‘compressing’ MIDI by artificially controlling note velocities, creating automatic harmonies and so on. MIDI plug-ins use virtually no power in themselves and can be rendered down as ‘real’ MIDI parts or the results can be bounced to audio very easily.

2: Use Alternative Sequencers
Some DAWs let you sequence not only regular MIDI parts but also blocks of pattern data. These are used to tell a specific module to change from playing one beat, sequence or loop to another. Pattern sequencing can be quicker than duplicating MIDI clips or notes to achieve this result, and makes for more flexible arrangements.

Typically, pattern clips can be converted to regular MIDI clips if required. Sometimes the pattern sequencing will be part of an instrument as in the case of Reason’s ReDrum and other times it will be part of the DAW itself as with FL Studio’s mini sequencers on MIDI tracks, or SONAR’s step sequencer section. Others such as Cubase have sequencers as MIDI insert effects and Logic’s Ultrabeat has its own sequencer too. It’s a nice, self-contained way of building patterns independently of the main project sequencer.

3: Explode and Combine Parts
There’s sometimes an option in a DAW to select a clip and then choose to either explode it out so that its constituent notes are split off to new clips or lanes, or to consolidate a number of existing notes or parts together into one clip. The former is good for reassigning parts of clips to play new instruments, and the latter for bringing together a number of parts to be played by one instrument.

Let’s say you’ve programmed a beat but decide you want the snare played by a different virtual beatbox. Split off the snare notes to a new lane or clip to achieve this. Or you’ve recorded in a number of lanes and quantized each one slightly differently but want them all in a single clip for export or for arrangement purposes. Here you would consolidate multiple parts together, sometimes also referred to as ‘merging’ MIDI parts.

4:  It’s Not Just about Notes
It’s sometimes a good idea to use MIDI clips that don’t contain note data but do contain controller data, especially in DAWs such as Live. These might control parameters in other tracks or modules, or be linked to external MIDI gear. In fact, this is how MIDI sequencers started life: triggering external kit. As well as note data, you can send program changes, parameter modulation and many other commands either internally or externally.

Drag them around a project freely to change parameters at different points. It’s a bit like automation and has a similar end result, it’s just that your MIDI clip might contain one of the 128 MIDI CCs (control change messages) instead of notes. These can be used to switch polyphony modes, change banks and all sorts of other MIDI commands, all recorded inside a project.

5: Create Bigger Sounds Easily
One of the quickest ways to create a more layered and fuller sound is to double up selected MIDI parts. Since you can have pretty much an unlimited number of MIDI tracks in most DAWs this is easy to do. Let’s say you have a beat playing through a drum instrument.

Create a second instance of that beatbox on a different track, or load up a different instrument. Then duplicate the MIDI part on to the new track and voilà: the same beat is playing using two sounds. Of course this won’t always sound great immediately – you might need to thin out the duplicated part, removing the kick drum for example, so that it doesn’t overload the sound. And two snares sounding at once might not work if they’re too similar, but you should tweak the sounds until they sit together correctly.

6: Automate Your MIDI
Virtual instruments and effects can be automated, and this is a very powerful tool to have in your arsenal. Use automation to change settings, switch plug-ins on and off, change patches and presets, vary effect levels and all manner of other things over time. Automation can often be unlinked from MIDI clips so that it can be moved around the sequencer, copied, pasted or deleted independently of the clip with which it was originally associated.

It can also sometimes be saved as MIDI files where only CC data has been used. Instruments that support sound morphing and have X/Y controls are particularly good to use with automation since you can precisely control the way sounds change over time. The same goes for effects: modify MIDI effects just like you would audio ones. Some DAWs have advanced automation features that are suited to control by a MIDI control surface.

7: Use Virtual MIDI
An increasing number of iOS apps allow virtual MIDI, which lets you send MIDI signals invisibly between apps on the same iPad or iPhone. So you can trigger a standalone iOS synth from your iOS DAW and record the results internally as long as both apps support the protocol. Some even accept MIDI input over USB from your computer for triggering sounds from the desktop.

8: Save Time When Editing
If you select one or more MIDI notes in a clip, it’s possible to drag them left or right to alter all their lengths by the same relative amount. So shorter and longer notes will remain different, but proportionately their relationship will be the same. You can apply other functions to them while they’re selected, including making all selected notes a specific length or deleting any overlaps in mono or polyphonic mode.

9: Get Scientific with MIDI Functions
Some higher end DAWs have MIDI function tools. These are not the same as plug-ins that process MIDI in real time – instead they can be used to batch process MIDI data based on set criteria. So, for example, you could use such a tool to remove all the sharp or flat notes within a MIDI part, delete or replace all instances of a specific note, or extract all velocity data to a new part.

Cubase is one of the most accomplished DAWs when it comes to this, and it has a dedicated Logical Editor which is particularly powerful. This isn’t like simply sticking an arpeggiator on a MIDI track – it’s more scientific and analyses all the information within a part in order to perform the function you assign. A practical example might be to change a bunch of MIDI clips from a minor to major key, or batch change the velocity of all the kick drum parts across a drum track.

10:  Bounce MIDI Down
Sometimes you want to use audio processing functions like audio reverse or mashup on a sound that is currently being generated using MIDI. It’s easy to achieve this by exporting the loop or part to your hard drive as an audio file, then re-importing it to an audio track and applying the plug-in. If your DAW has the option, try bouncing the MIDI to audio internally.