The best virtual instruments: 12 of the best string libraries and instruments

As part of our soundtracking issue, we’ve chosen to highlight some of the most exceptional virtual string libraries and instruments that have been reviewed by us recently. Someone pass a hanky… Best for Intimacy: Spitfire Audio LCO Strings Price £299 Contact Spitfire Audio This library from Spitfire Audio utilises six violins, four violas, three celli […]

As part of our soundtracking issue, we’ve chosen to highlight some of the most exceptional virtual string libraries and instruments that have been reviewed by us recently. Someone pass a hanky… 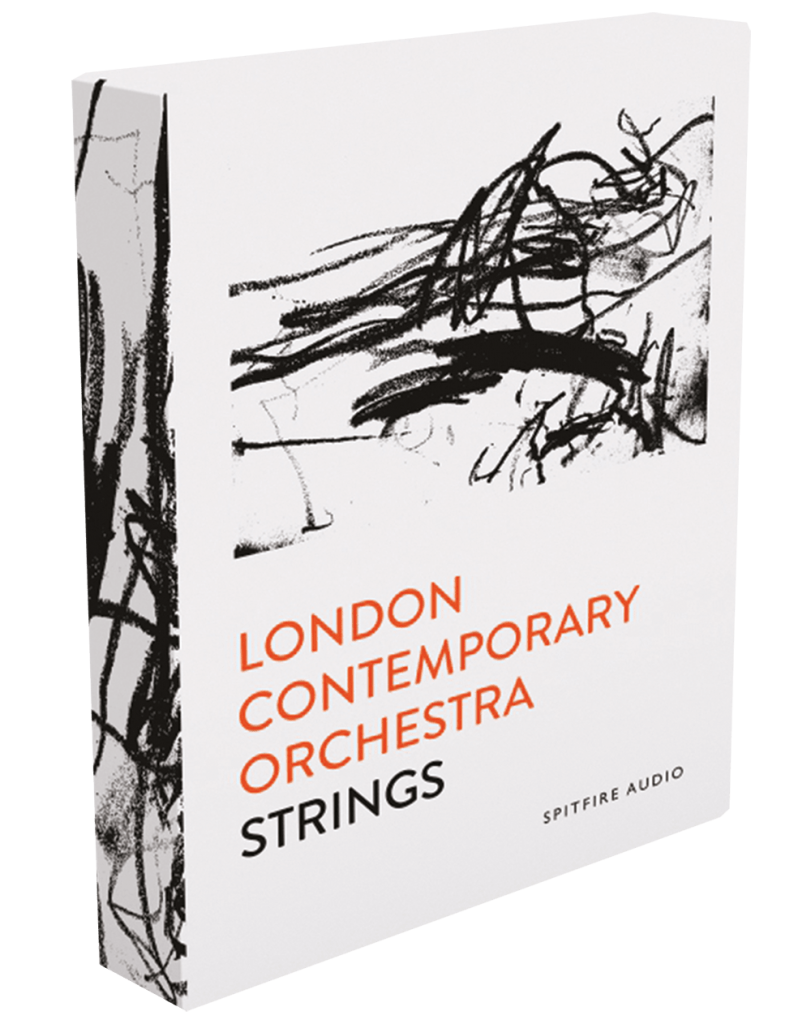 This library from Spitfire Audio utilises six violins, four violas, three celli and two double basses from the London Contemporary Orchestra and as there was a small room used for the recording, there is a discernible intimacy in the resulting sound. There are a couple of mic positions to choose from plus some unusual articulations and a great use of granular tones and tremolo effects. All of these combine to make this a very interesting, more leftfield library that is very rewarding to experiment with.

We said: “This is a really interesting and different library and it offers vast articulation options. It’s beautifully creative, and offers a great palette. Work with it and you will be rewarded with sonic gold.” 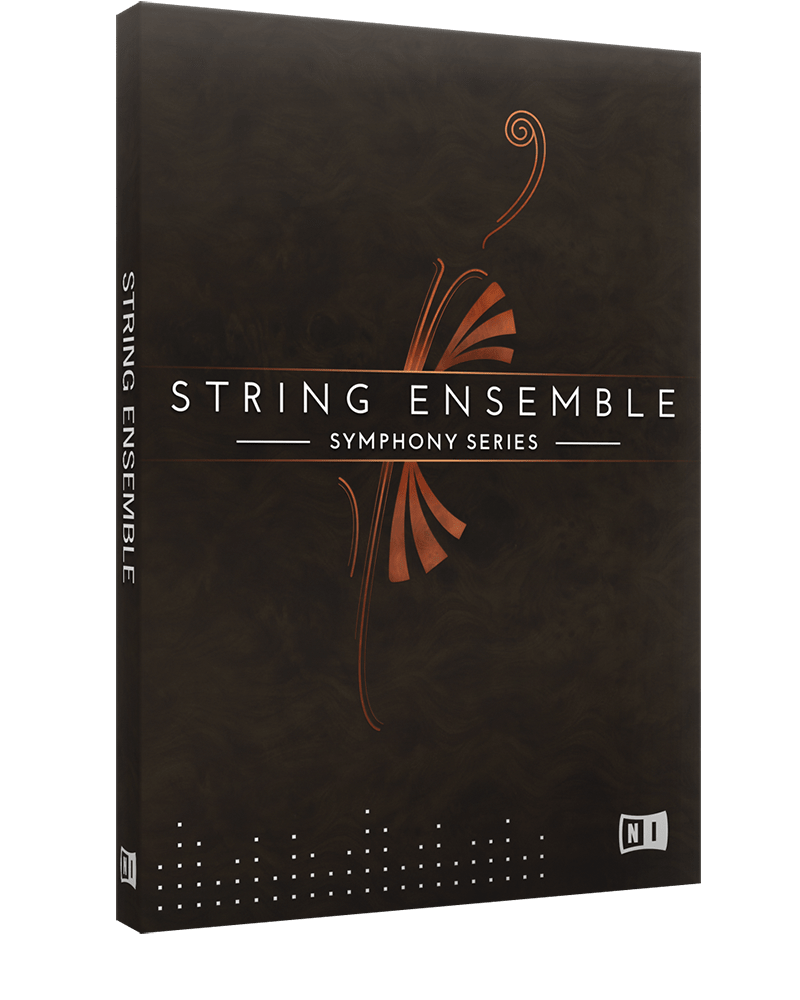 You want strings? Well, how about an entire 60-piece string orchestra? This is part of the Ensemble series developed especially for Native Instruments by Soundiron. String Ensemble provides a production-ready stereo mix, plus the ability to create your own mix using close, mid and far microphone positions. There’s a dedicated mixer page with parametric EQ, convolution reverb and compression, plus a choice of key switches or MIDI CCs that can be used for assigning articulations.

We said: “This symphony string library is certainly a winner, and apart from the tiny gold text on a very dark background, is very easy to use and feature-packed in terms of control. With its rich, luscious, professional sound, this should prove popular with professional and amateur composers alike.” 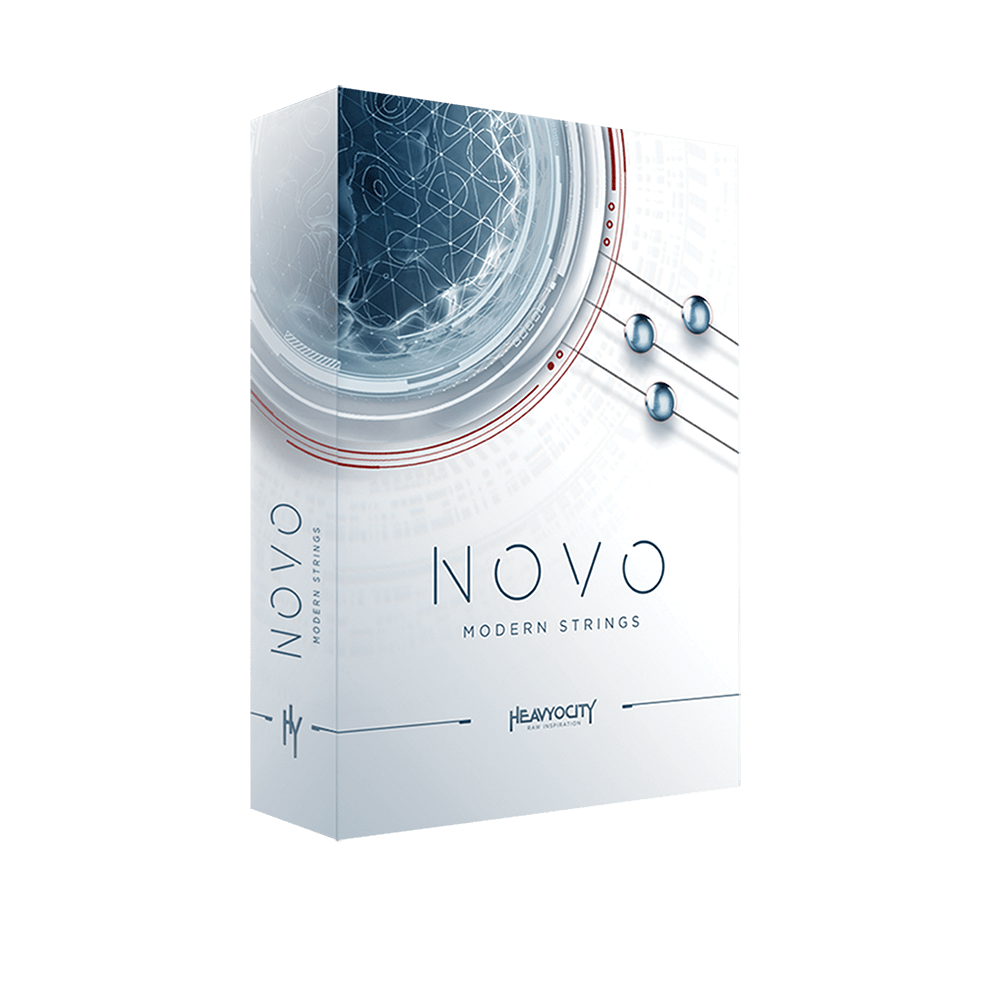 At this price, you expect a lot of strings and Heavyocity certainly delivers that. The library has a beautiful set of samples recorded at the legendary Eastwood Scoring Stage at Warner Bros. Studios in LA, which gives an indication of the quality on offer. The library contains both a Traditional section and a Hybrid section for cinematic and modern sounds. The strings feel bright and close, but by using the onboard effects, it’s very easy to melt the timbre with some use of either reverb or delay, or explore the three recorded mic positions.

We said: “It offers plenty, for a sensible price. The fact you get all your traditional patches alongside something flexible and modern is a real coup, making it incredibly appealing to anyone working in the soundtrack arena. There are plenty of other orchestral strings libraries that would give this a run for its money, but they’re twice the price. You really do get the best of traditional and hybrid samples, offering plenty of inspiration for your compositions.” 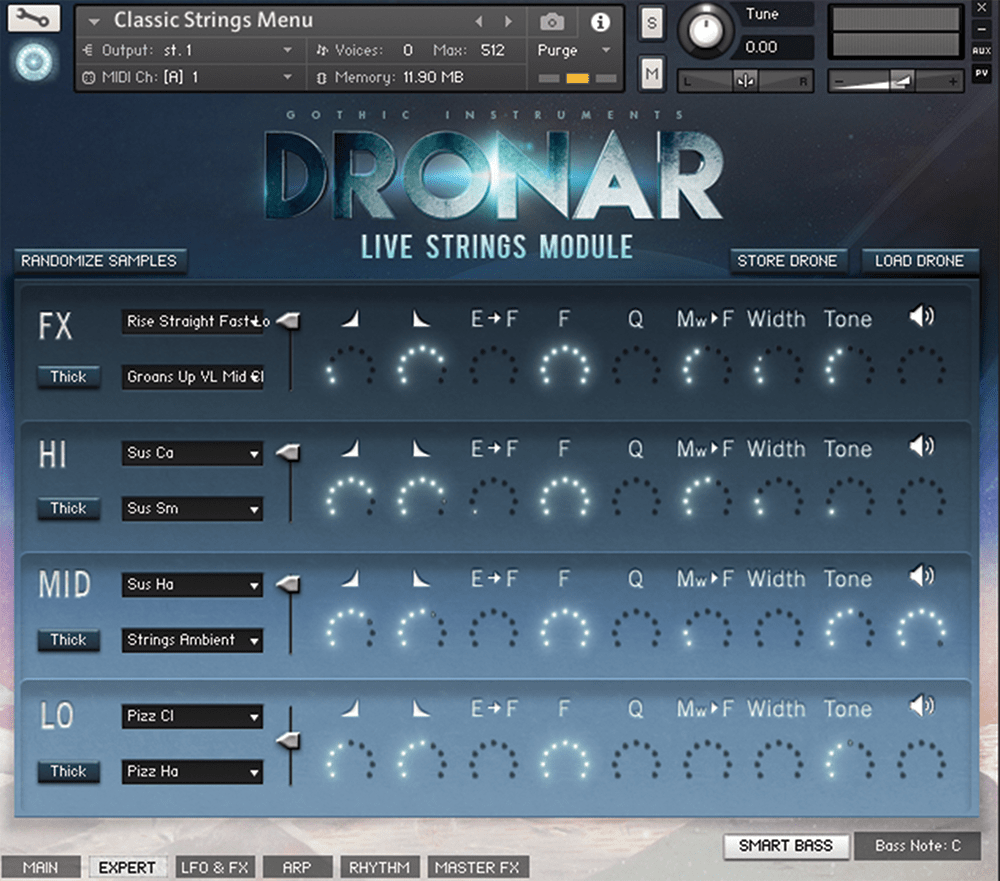 This library uses samples originally played by the Royal Liverpool Philharmonic Orchestra and does contain some classic string patches, but as you might expect from a company called Gothic Instruments, the focus here is really on effected sounds, so it’s not really a standalone string library, to cover all bases. It features a Rhythm Editor where the pulsing of staccato and pizzicato playing can be achieved in a believable way, and there’s also an Arpeggiator included, too.

We said: “I applaud what Gothic Instruments has done here; approaching the Live Strings title from an altogether different stance – so much so, I would say that the title ‘Live Strings’ is possibly a little misleading. I would call it ‘Live Effected Strings With A Large Dose Of Hardcore Attitude’, but to be fair, that doesn’t roll off the tongue quite so easily. If you’re after strings-based and otherworldly drones, at this price, it’s hard to go wrong.” 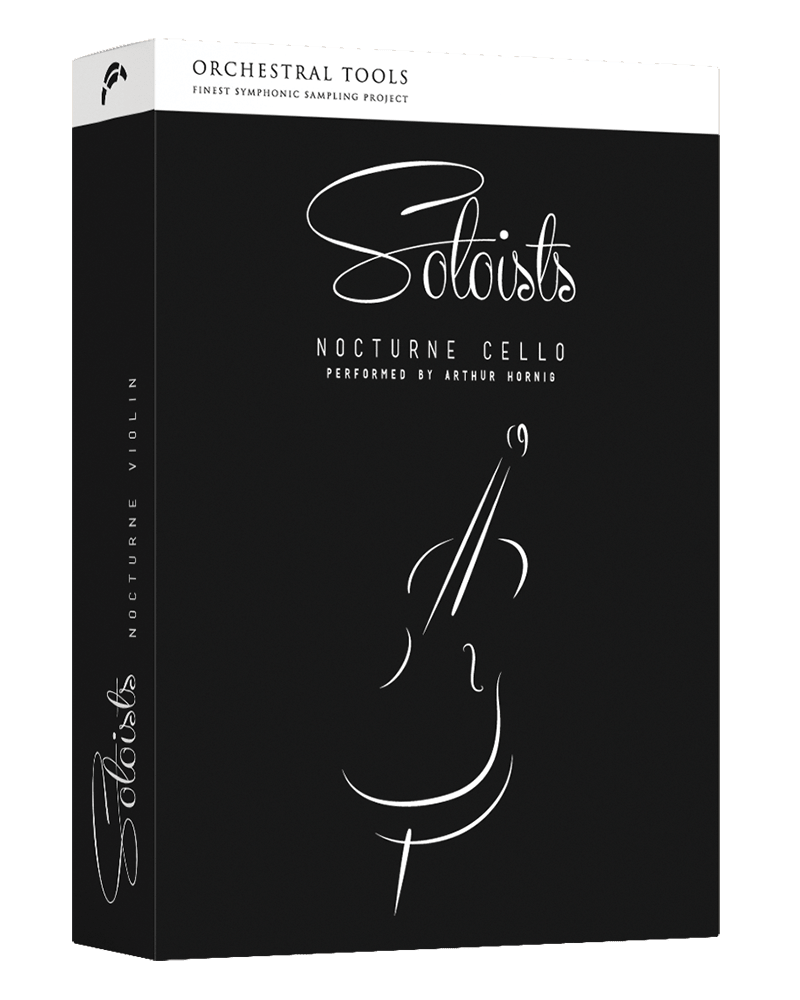 Nocturne Cello is the second instrument in the Orchestral Tools’ Soloists Series and is obviously dedicated to one stringed instrument: the cello. Violin and cello are the most commonly used orchestral instruments in a solo context and of the two, the cello is maybe the easiest to play expressively in a virtual context. This instrument was recorded at Berlin’s famous Teldex Studio, but rather than in the main room, the performer was captured in the solo booth for ‘a more intimate, direct sound’. 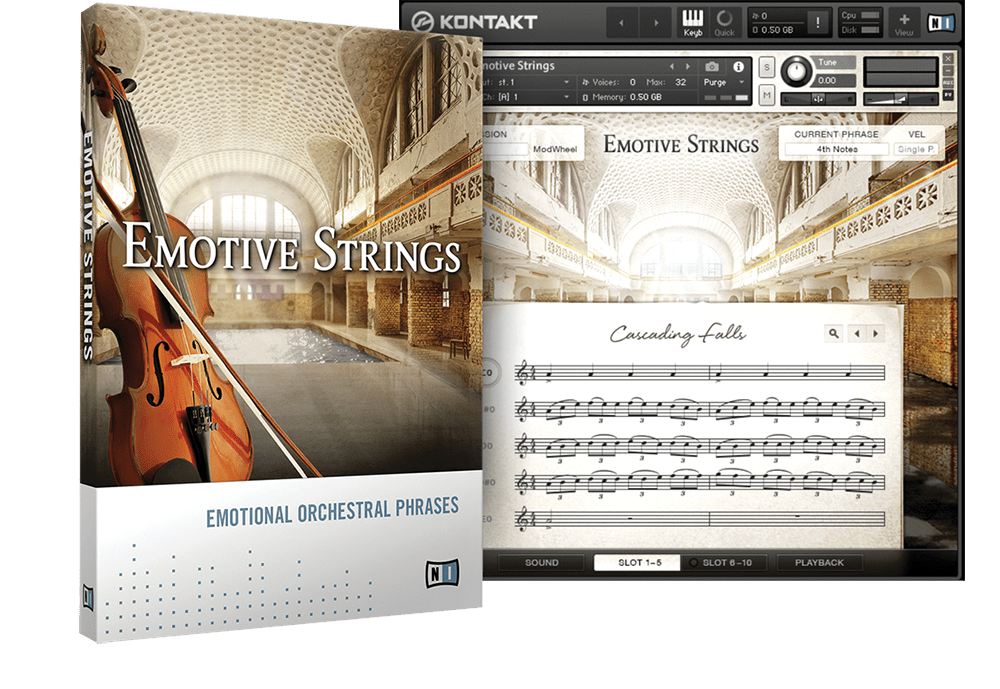 Our second from Native Instruments – those Berlin-based audio experts have been busy with their strings. It contains 175 string orchestra phrases, two microphone settings and 64 themes, which are groups of up to five phrases that work well together. The results are gentle, with plenty of smooth, flowing legato lines and much of the material has a dreamy quality about it.

We said: “A highly polished sound from the start, and musical material extracted and analysed from hit movie scores should be able to kick-start just about any composer suffering with a mental block. It’s even possible to create melodies and complete compositions with this library. An awful lot can be achieved with it and we found it highly inspirational from this idea-building standpoint. Overall, Emotive Strings stands as a brilliant piece of pretty simple-to-use software for quickly and effectively scoring haunting legato string lines and generating creative ideas.” 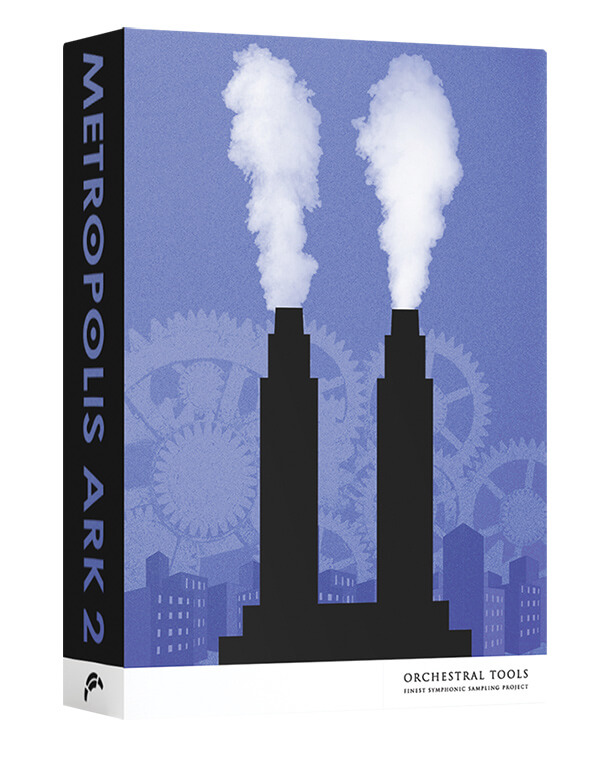 The first Metropolis Ark was bombastic and ideal for impact. While Arc 2 is more reserved, it can still be epic, just with more depth and subtlety. You get a whole orchestra – not just strings – but you do get a whole lot of strings too…

We said: “There is no doubt that this library will appeal predominantly to media composers, or those interested in creating soundtrack-based music. There’s a great choice of sounds available and while they do very much lend themselves to the cinematic, this is not exclusive. If you compose music that might benefit from a good collection of more subtle orchestral colours, this is definitely worth considering; you’ll get a whole batch of other sounds that might interest you, too.” 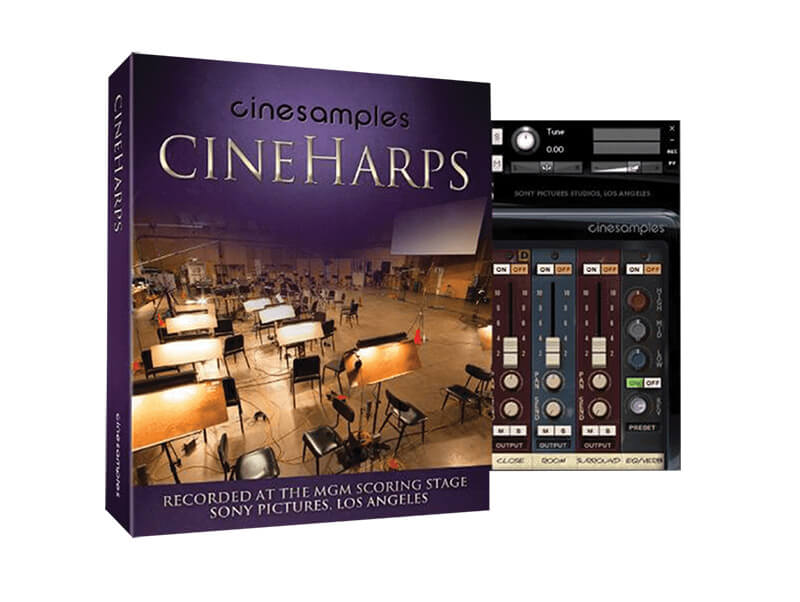 The harp might not get as much of the glory as an army of violins and cellos, but the string sound of the harp is more prevalent in today’s film and TV scores than ever before. But have you ever seen a harpist struggling with this beast of an instrument on the tube? Yep, this really is one instrument that benefits truly from a software version, and this is truly a great software version…

We said: “The additional instrumental patches which place the harp in context are immensely useful, while the sheer breadth of timbral choice available with the glissandi and FX-based patches make this package a little bit of a bargain for the price, at least if you need harps on a regular basis. Anyway, it’s time to stop harping on about it – it’s comprehensive and covers all bases while going way beyond and sounds truly delicious.” 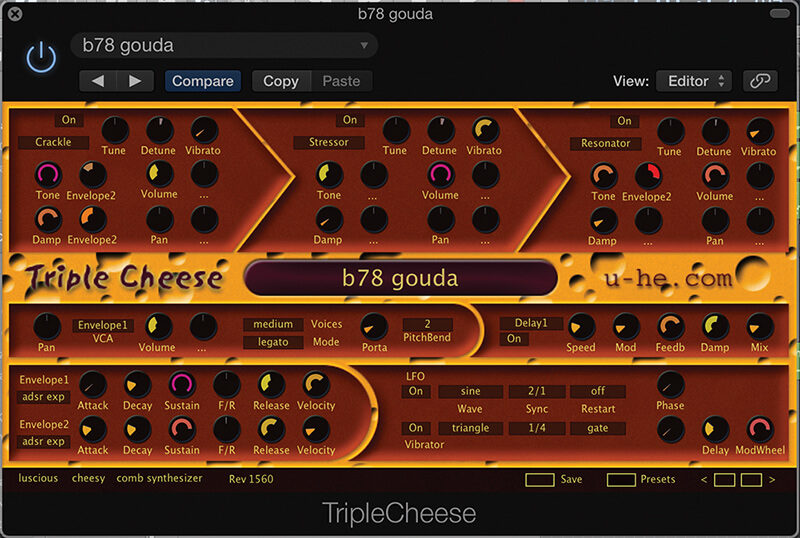 Triple Cheese is one of the best free synths out there, with three comb filters and eight different modes per comb filter module. But it’s also one of the few string-sounding synths that’s available for both Mac and PC. The winner of the 2006 KVR Developer Challenge, it’s a great way to get a variety of string- and cheese-based sounds for your computer. And let’s just repeat: it’s free!

We said: “Triple Cheese has been a firm freeware favourite, perhaps down to the fact that it is not doing the analogue ’thing’. Instead, it uses comb filtering and three ‘cheese modules’ to get a variety of sounds, including pads and plucked sounds. Banks include different cheese types (we’re partial to a bit of Gouda), which all go towards making this one of the most distinctive freeware synths on the planet, and one of the pieces of freeware you will keep.” 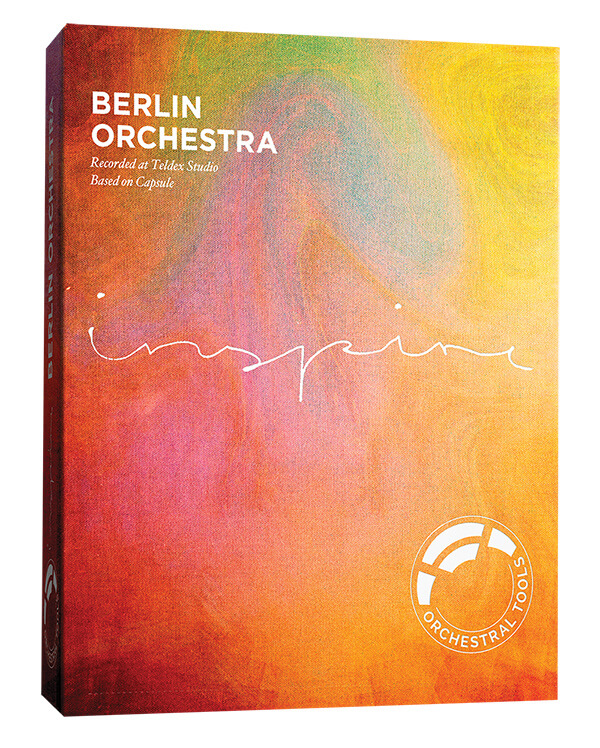 It’s another complete orchestra of sounds – not just strings – but we’re on a cheaper budget here. Consequently you get less action across the board but certainly enough to create any soundtrack for any genre. One of Orchestral Tools’ best value collections.

We said: “The Strings, in particular, offer a good range of articulation types, from the expected sustain and staccato, to pizzicato and tremolo across both major and minor 2nds. Sonically, these are excellent, with the pizzicatos coming in for particular praise. Each pluck offers a sense of depth, with a small degree of inaccuracy in the ensemble, which makes it sound very believable. Despite costing less than you’d expect, this is a very comprehensive option indeed. As the name suggests, there’s a vast amount to inspire you in this fantastic library, and that’s what we all want: a great all-round library for a very fair price. Bravo!” 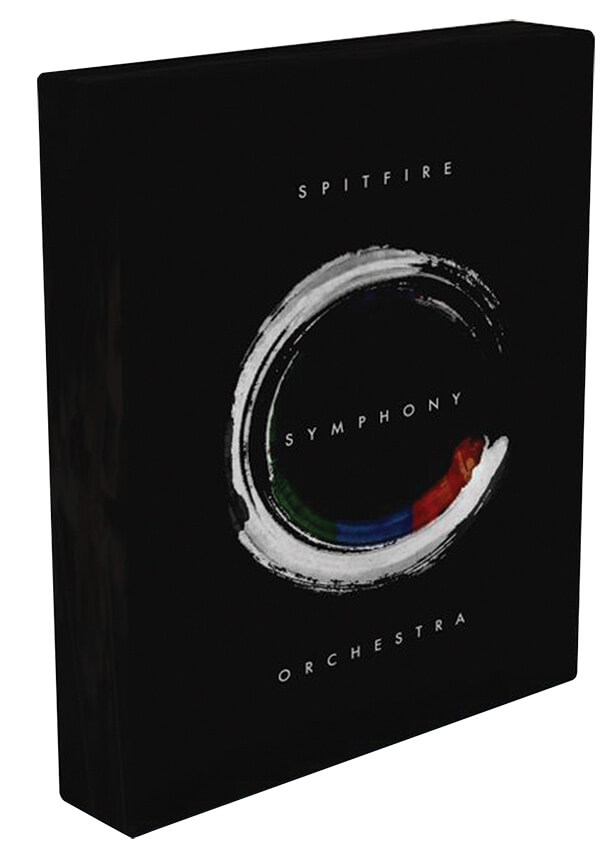 You get three collections in one here with full String, Wind and Brass section orchestral libraries but the String section is very much ensemble-based and symphony orchestra-sized, offering lots of flexibility.

We said: “As the String section is largely a repackaging of Mural Symphonic Strings, from a previous product incarnation, we’ve all come to expect how good this will be sonically. Sure enough, there is no disappointment – in fact, the ability to easily access just what you want, either manually or by key-switching, is elegant. It’s an expensive option but if you’re a composer working in a more classical or filmic/media- based genre, this is an absolute gem of a package to consider. Its strength in so many areas makes it hard to beat, and you might find it replaces whole swathes of libraries that one might employ to add up to a sum of parts.” 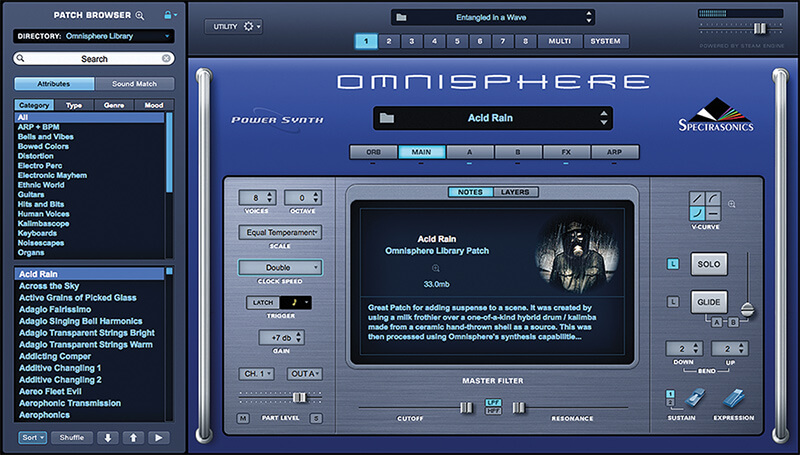 Of course synths can do strings almost as well as dedicated orchestral packages but rather than list all the good ones, why not just list arguably the best one? Omnisphere 2 is widely regarded as one of the greatest soft synths out there and is packed with strings and pads, making it ideal for use on any soundtrack too.

We said: “While some developers have got close to Spectrasonics’ greatness, there’s little doubt that the revitalised Omnisphere will set a new gold standard for the next five years. Thanks to some innovative features, not to mention a wealth of extra sonic material, it’s hard to imagine any software instrument delivering the same breadth and sheer sonic excellence.”