Want to vocode your voice, or simply keep it in tune? ‘Do you believe’ it can be done for free? No? Well, these eight eclectic freeware vocal plug-ins might make you change your tune.

The success of Auto-Tune means that there are many imitators out there and, and that means free ones too. So here’s another ‘live voice changer’ although this one has a very modern slant and look (and it’s also 64-bit and Mac ready too).

You might not be surprised to learn that it’s a plug for a not so free plug (read our review of the full version) but you still get the Pitch Correction (including a bitcrusher) and Pitch Shifting (transpose your voice up and down) sections but the €25 version adds a rather unique-sounding Pitch-Tracking Modulation section where you can change the type of speaker, make vocals more feminine or masculine and generate throat sounds.

We could, and probably should, include a Melda plug-in with every freeware round up. If you haven’t already, download the company’s excellent MfreeFXBundle freeware bundle which contains no less than 32 freeware plug-ins – everything from noise generators to filters – and includes this rather great MAutoPitch pitch corrector.

It’s an automatic pitch-correction plug-in designed for vocals in the Auto-Tune vein. Whatever your thoughts on that process, it’s a commonly used one in music today (understatement of the year) and, used ‘creatively’ can give you that ‘beloved’ vocal effect. MAutoPitch includes a formant feature that takes it into that more creative arena which is easy to control, as are the main pitch-correction features with a simple and accessible scale. Pitch it up now… 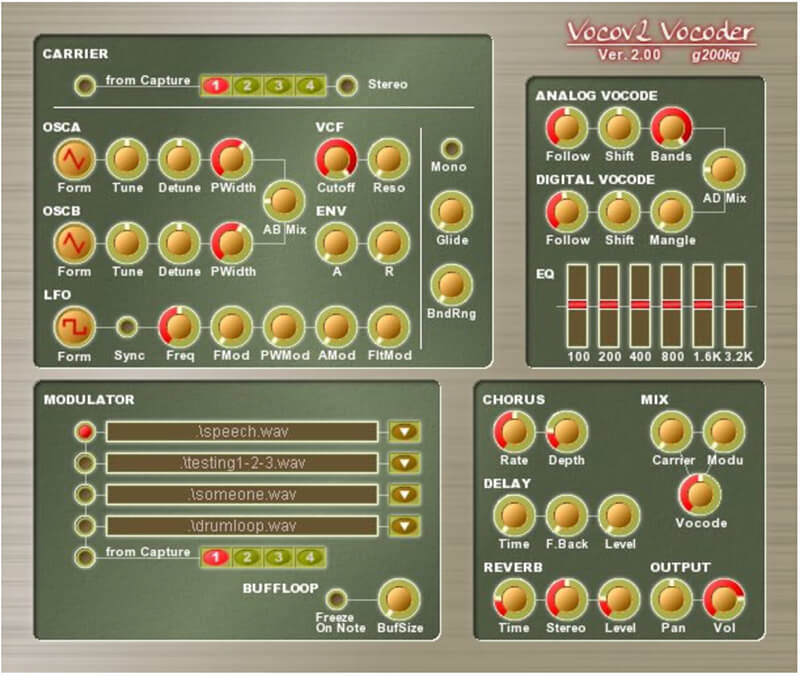 The history of the vocoder goes back nearly 100 years and all sorts of gear, both hard and soft, has been used to create the classic robot voice effect used so well by Kraftwerk, ELO and many more. And now you can get the effect for free with this digital/analogue hybrid VST.

Both carrier and modulator components are used to create the effect using an input signal like the human voice. Vocov employs two different engines: an FFT-based digital engine or a filter bank analogue version.

What’s really good about it is the simple layout and it is very easy to use with audio files. There’s also a useful EQ section so you can really push the right frequencies, and if that’s not enough, there’s even an 8-voice synth thrown in for good measure. ‘We are the (free) robots”. Indeed. 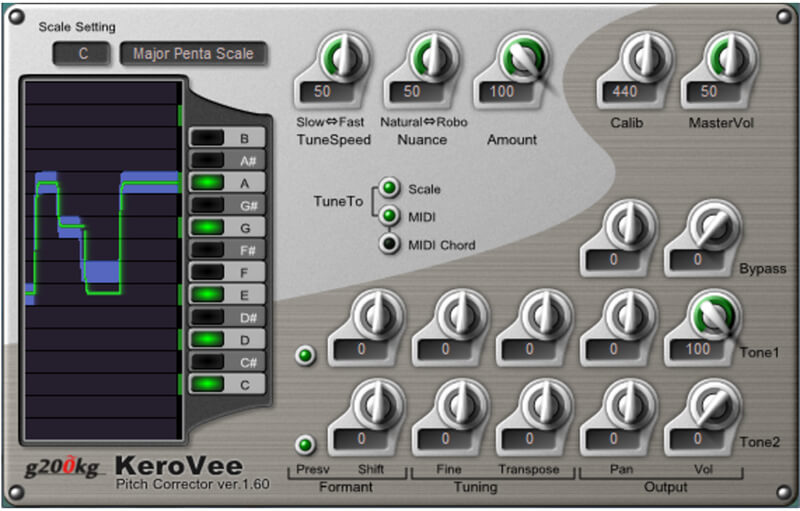 Like MAutoPitch, Kerovee is a pitch correction processor and, like Melda’s, it comes packed with enough features to take it beyond just automatic tuning and into more creative territories.

In fact it does step a little on a vocoder’s toes with some effects that you can achieve, pushing the results in that robotic direction, although not as far as some of the other pitch correction plug-ins here, and subtle pitch-correction is most definitely what Kerovee is aiming for (in the main).

The GUI is looking a little dated and sadly it looks like development stopped a while back, so we probably won’t be getting 64-bit any time soon. But for older systems and wobbly voices, this is a good option.

Yes we know it’s another 32-bit Windows VST but the difference here is that this plug-in is a plug for a paid for version (that is 64-bit and will run on a Mac) which at the time of writing is just $15! Vocal King is essentially a smoothing preamp and compressor plug-in, designed to ‘bring out the presence and clarity in vocals’.

You only get a few knobs to play with, but the idea is you boost and compress until you find the right level and quality. There are EQ controls too and even a simple ‘2-knob’ version if having seven knobs baffles you. 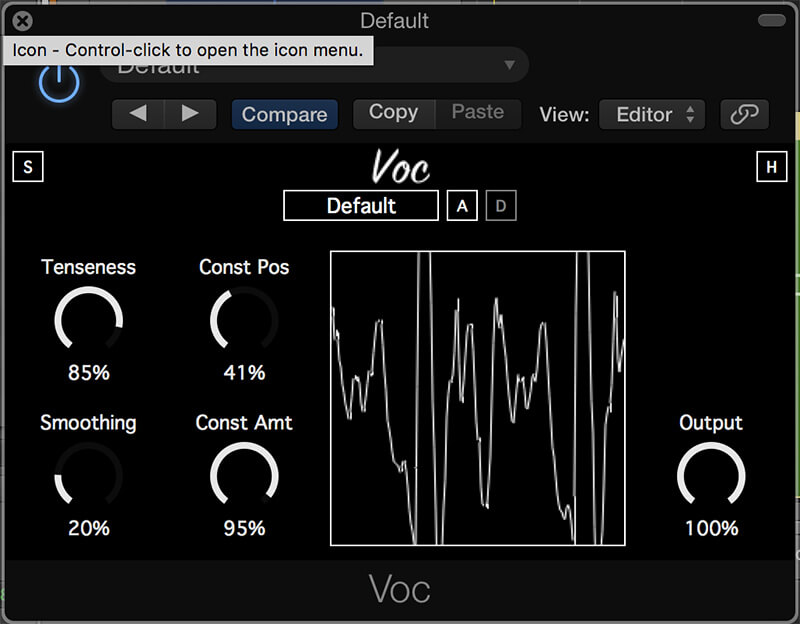 On the face of it, this is a simple plug-in but we’re betting much thought has gone into it. It emulates the glotis and shape of the vocal tract to mimic parts of the human voice. In use you get Smoothing, Tenseness, Const Pos and Const Amt controls which can alter the sound quite considerably – although we’re not entirely sure how.

You’ll get some interest out of it running low and high notes through it to make ‘male’ and ‘female’ versions but don’t go thinking this is a human voice replicator from the future – it’s more odd-ball research effect. We found it best to try and get it to resonate by tweaking the Const Pos and Tenseness controls and it is almost worth a punt just for the driving results from that. 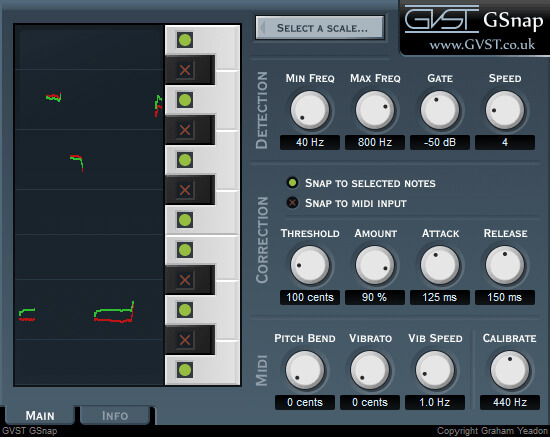 Our final pitch correction plug-in is a standout thanks to its logical layout which comprises three main groups: Detection, Correction, and MIDI. The Detection section allows you to adjust according to incoming audio; Correction determines the method and effect of the tuning; and MIDI determine how GSnap deals with particular MIDI information.

Here you can use external MIDI notes to force the tuning to a certain key – a useful addition not available on all of the tuners here.

There’s a great instruction manual too, detailing how to get ‘that’ sound and others by switching modes mid tuning, playing MIDI info in in real time during tuning and more – all useful tips to get the best from the plug-in. 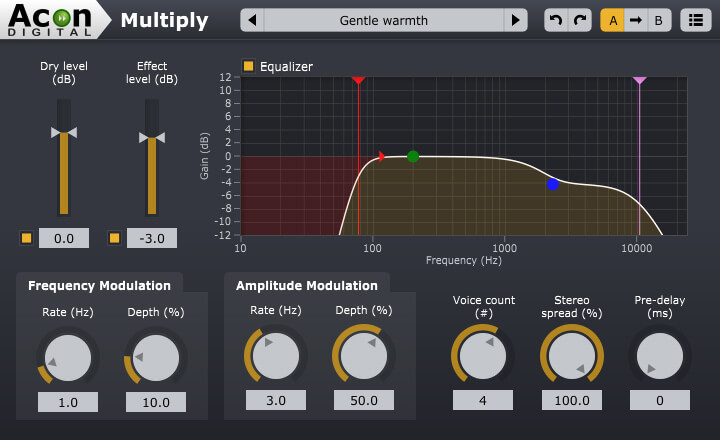 And we finish with a chorus effect. These are always good with vocals simply because they can fatten a voice up or, as in this case, be used as a more dramatic effect.

Multiply processed voices using a phase randomizing filter to avoid comb filter effects and Acon Digital claims this ‘can be used to simulate the effect of several performers playing the same tones simultaneously, to widen the spatial image or to create special effects for sound design’.

There’s a lot of vocal flexibility going on here, then, yet the controls are simple and you can quickly employ the effect that Acon is talking about. A graphic EQ and integrated pre-delay ramp up the effects even more, delivering modulated and diffuse echoes.