Here are some of the best software reverbs that money can’t buy – because they’re free. 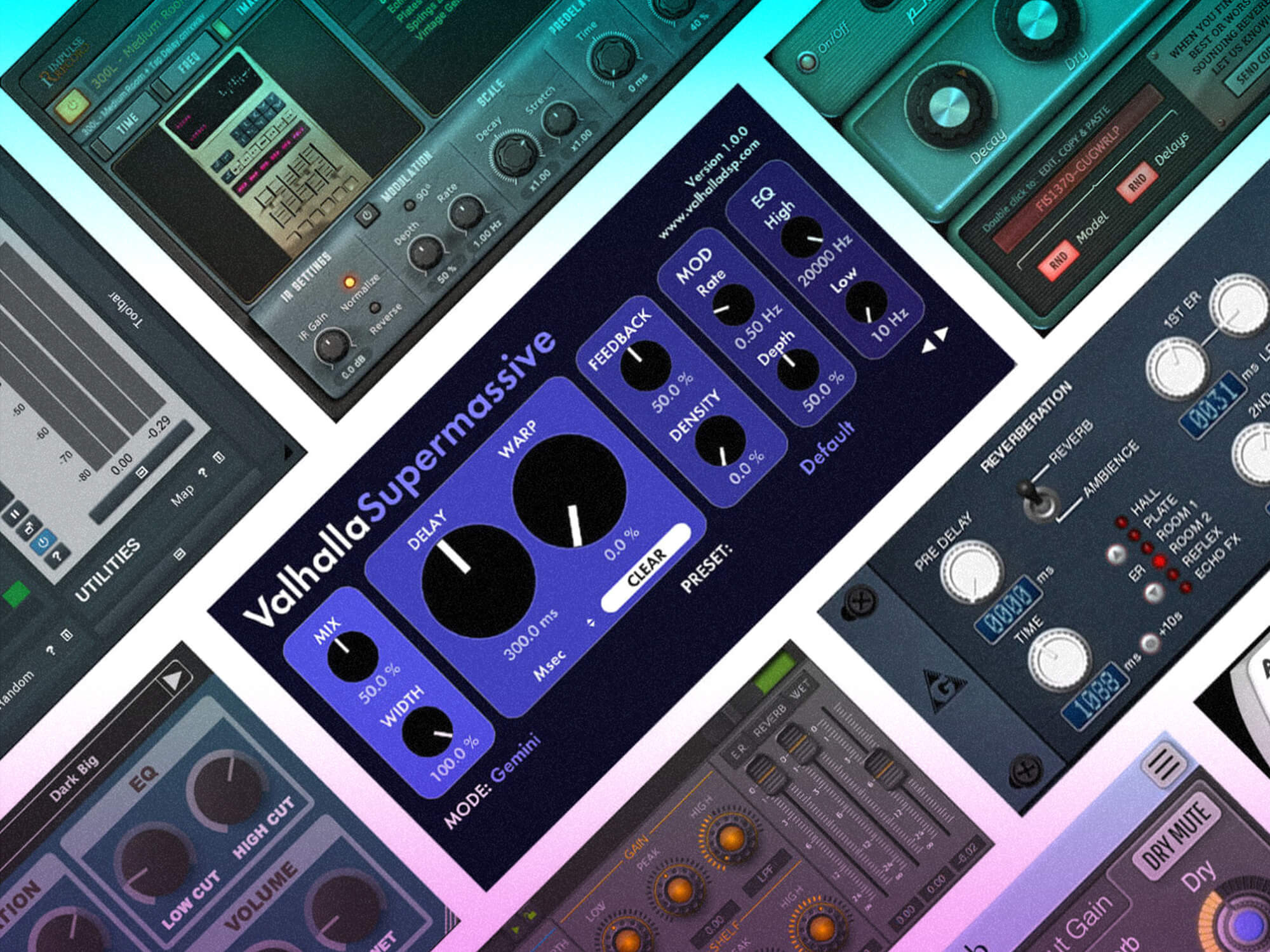 In situations where natural ambience is scarce or subpar, plug-in reverbs can fill the gap to add a sense of depth and space to our productions. From organic and grounded to ethereal and otherworldly, we’ve compiled a list of the best software reverbs that can be applied both as creative effects and to solve more mundane mixing issues. Best of all – these picks are all free.

The best free reverb plug-ins at a glance

Music-makers have been raving about this creative reverb from Valhalla since it launched this May. The aptly named Supermassive offers lush reverbs, otherworldly delays and a vast spectrum of atmospheric goodness.

The ace up its sleeve is the Warp control, which can turn signals into transcendental sounds, beginning with phaser and chorus-like qualities that quickly evolve into cascading harmonic echos and minutes-long modulated reverbs at higher settings.

Supermassive gives you eight distinct delay/reverb modes, each with different attack, decay and echo density. According to Valhalla, these controls allow music-makers to dial in “pointillistic echos, lush reverbs, echo clusters and all sorts of sounds in between.” 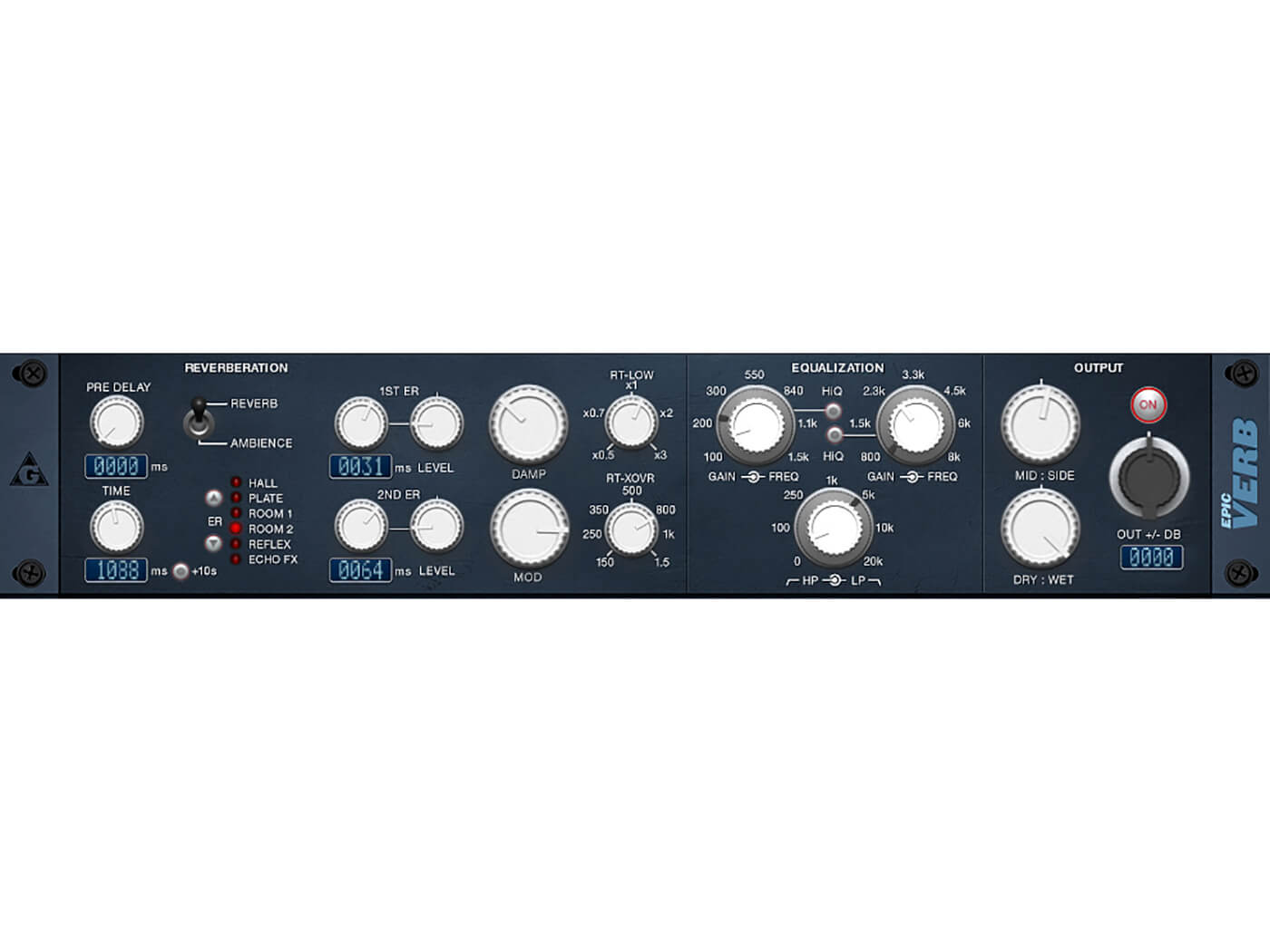 Controls for this reverb plug-in are relatively standard – there’re knobs for time, pre-delay and dry/wet mix, as well as some character tweaking options such as reverb tail modulation and damping. Also, the plug-in offers two EQs, as well as additional high- and low-pass filtering. 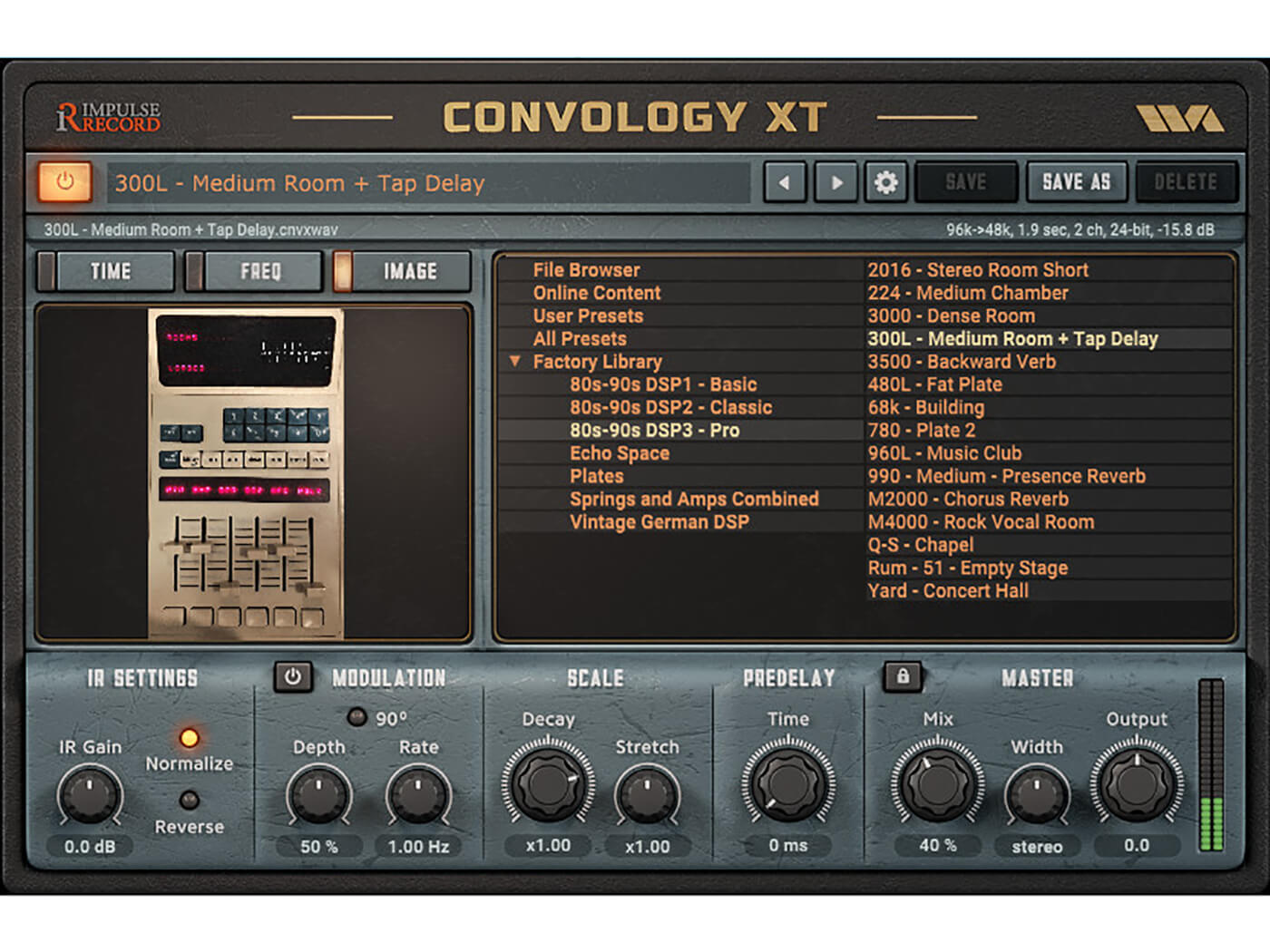 Convolution reverbs use samples of real-world spaces (and hardware) called ‘impulse responses’, shortened to IRs. Through a process called convolution, these ambience samples can be used to simulate real spaces in your productions.

Avid’s Convology XT gives you 70 IR files built in – but also lets you load custom ones. Especially handy when mixing is that Convology XT enables you to change IR models without having to stop playback, allowing you to audition different models quickly. It also lets you make some adjustments to the spatial qualities of an IR with “scale” functions, stereo width parameters, 3D chorusing and more.

Because IRs are just WAV files, you could also experiment by loading non-IR audio files for some wild results. 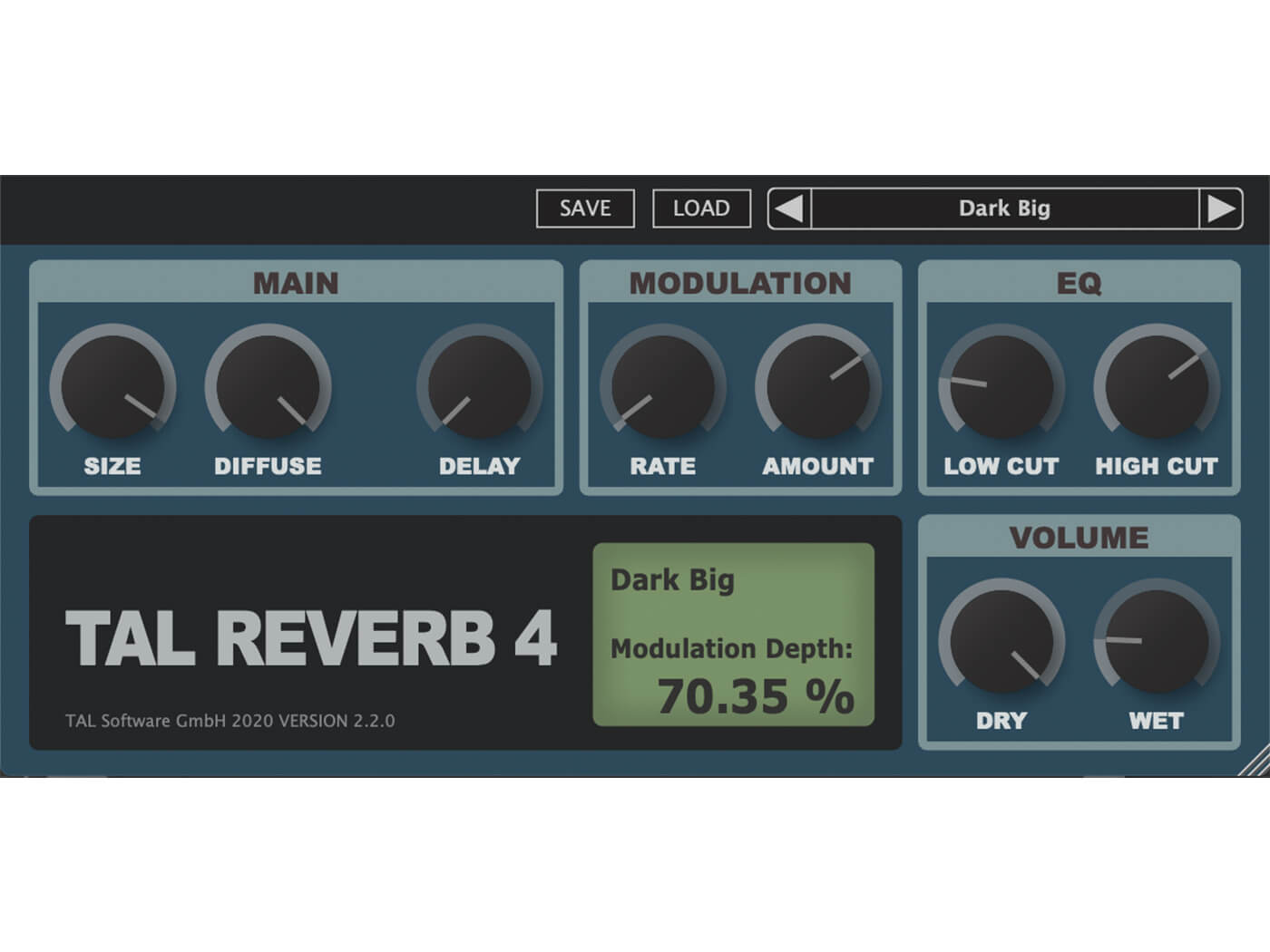 Togu Audio Line is a name familiar in both our synth and reverb plug-in roundups. With Tal-Reverb 4, the plug-in makers set out to design a high-quality plate reverb with a vintage 80s character.

As with previous versions of Tal-Reverb, this one is easy to use and sounds great. Its distinctly diffuse sound, when paired with the modulation section, can lead to some texturally interesting reverbs.

The high and low cut knobs make a return in this version, too. While this is the latest in the Tal-Reverb line, previous versions aren’t sonically identical. And, with TAL-Reverb 3 still available to download for free on TAL’s website, you could try both and see which you prefer! 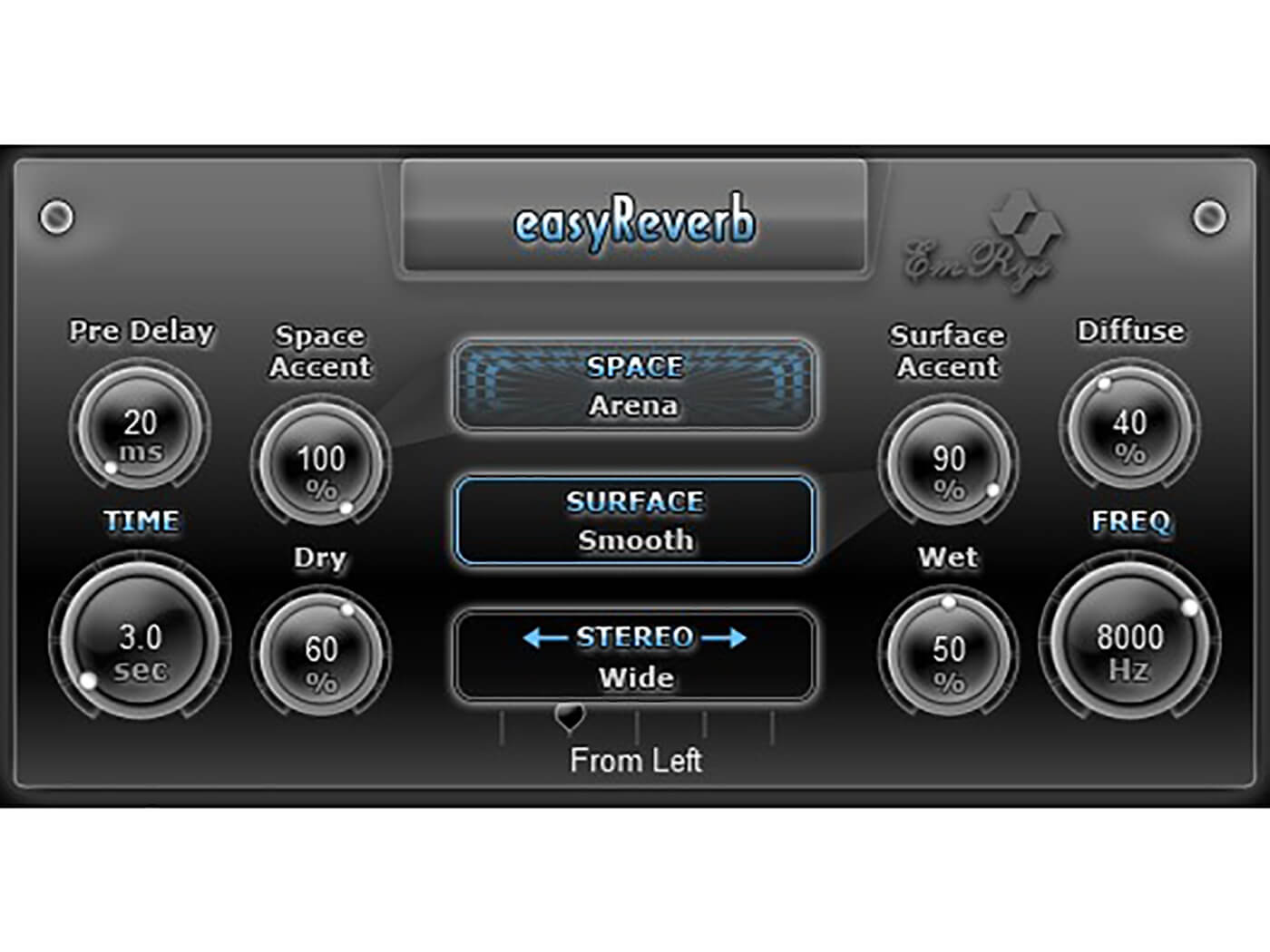 If you’re working on a computer with few resources to spare – then this simple-to-use algorithmic reverb might do just the trick. It gives you eight acoustic spaces, ranging from arena and cathedral to metallic box and “special explosion”, which can be further dialled-in for your tracks.

Plus, you can tailor your reverb sounds through six surface types, and eight different stereo reflections. For a quick start, easyReverb also gives you 60 presets. 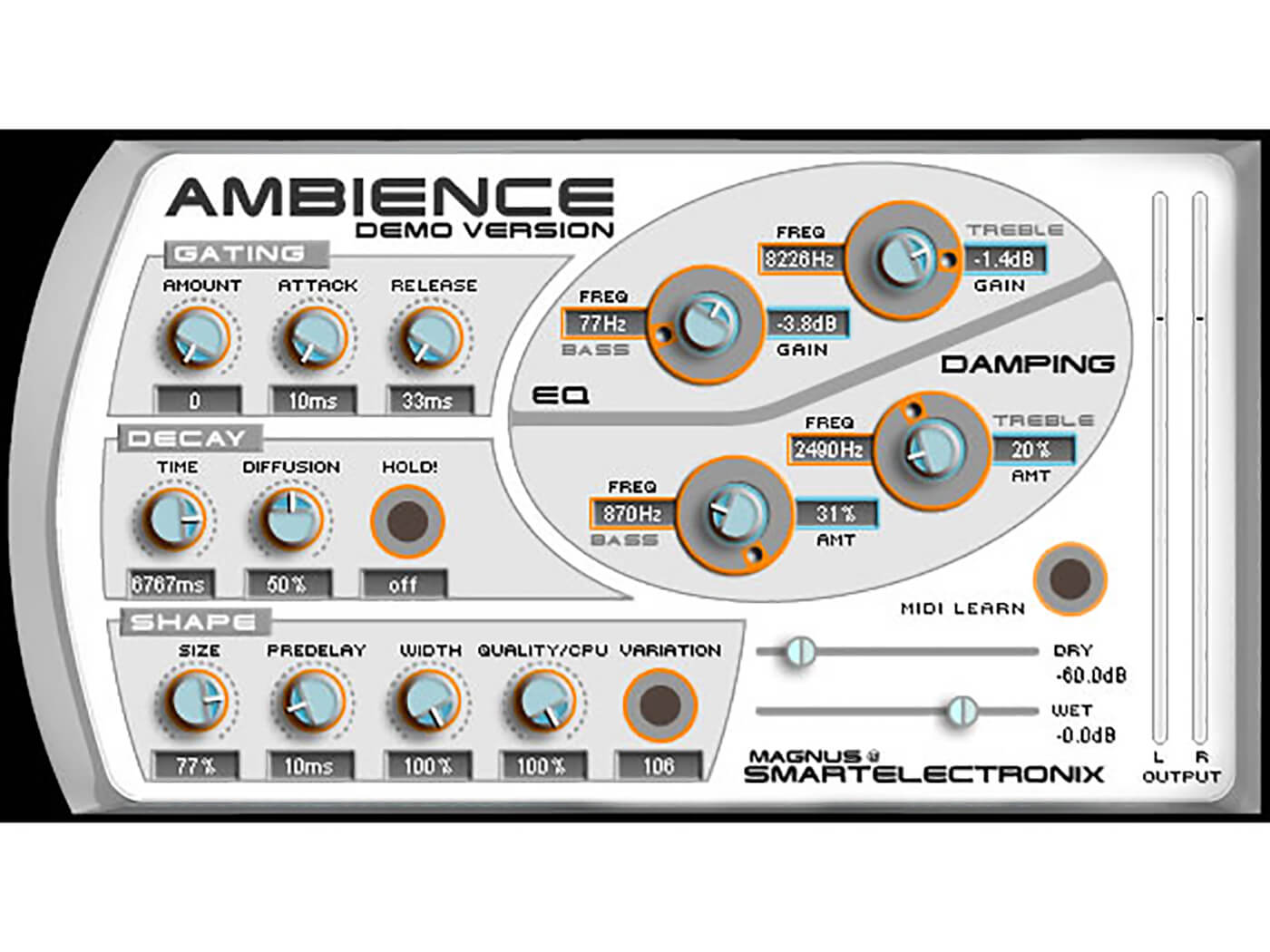 Ambience was designed by Smartelectronix member Magnus Jonsson when he was still a student, and it remains a favourite amongst thrifty music-makers.

This reverb plug-in is similar to the included reverbs of DAWs, in that it’s comprehensive and offers an array of controls, as well as a selection of quality presets. There are some more exciting features that can be great for creative applications. A Quality knob lets you limit the plug-in’s CPU usage, which can sound funky at low settings. There’s also a Variation button, which generates a new version of a “space”, this can be handy for quelling unwanted echos or rings.

Ambience also includes a Damping section, which can alter the reverb’s decay characteristics; an EQ section; a built-in gate; a diffusion knob, and a hold function, which freezes the reverb in its current state for infinite, luscious pads. Also, compared to some of the other plug-ins on this list, Ambience has a polished interface, which is a plus. 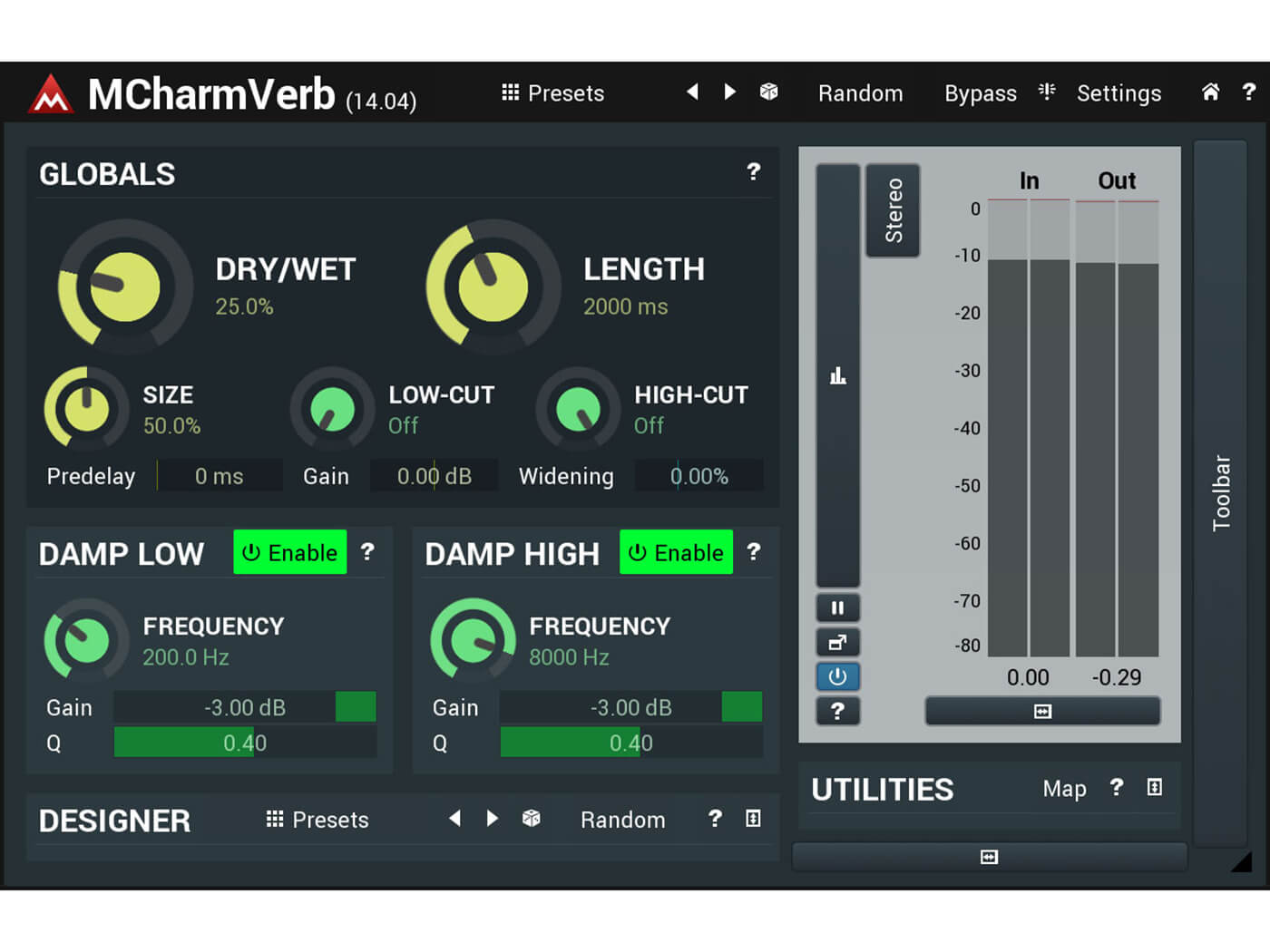 Released by MeldaProduction as a ‘thank you’ to its community, this lush reverb plug-in draws on the engine of the more intricate MTurboReverb, and presents it with more straightforward controls.

For extra control over its reverberation characteristics, there are also Damp Low and Damp High tone controls, which can be bypassed if you want to conserve CPU. Additionally, if you’re feeling lucky, you can take advantage of a global randomize button, which is a quick way to get new reverb sounds. 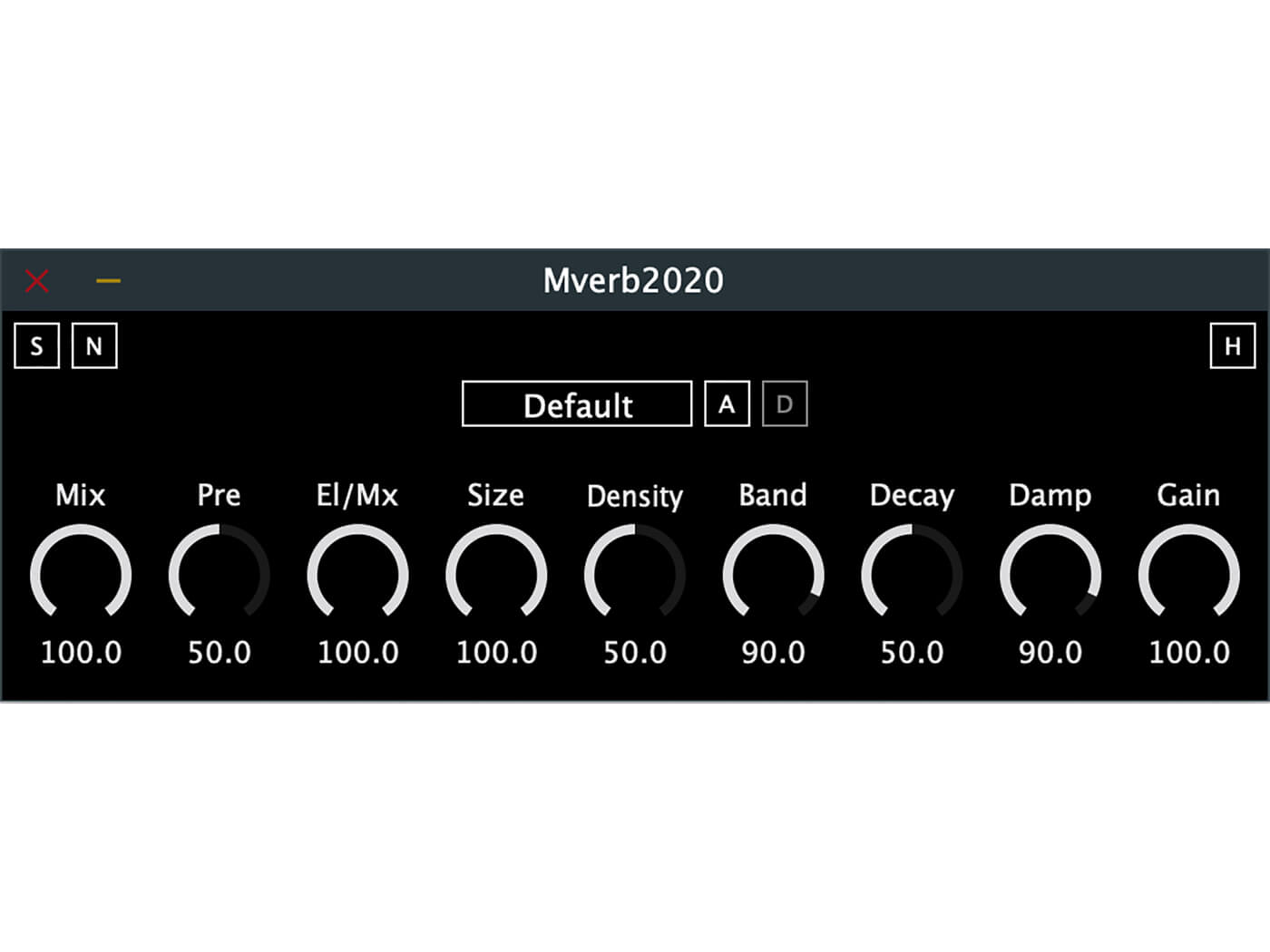 Conceived as a 64-bit version of Martin Eastwood’s MVerb plug-in, Socalabs’ MVerb 2020 mirrors the lush and intricate reverb that it’s based on.

The original was designed as a demonstration of the figure-of-eight reverb structure proposed by Jon Dattorro – doctor of electrical engineering, researcher of applied mathematics and acoustic engineering, and taekwondo il dan.

In a description of the original MVerb plug-in, Eastman described the reverberation method as employing “a bank of all-pass filters to smear the phase followed by a loop of multi-tap delay lines that feedback into themselves to create echoes.”

You can find a diagram of the method on Valley Audio’s page for Plateau, a plate reverb module also based on Dattoro’s plate reverb. You can also read Dattorro’s research paper here. 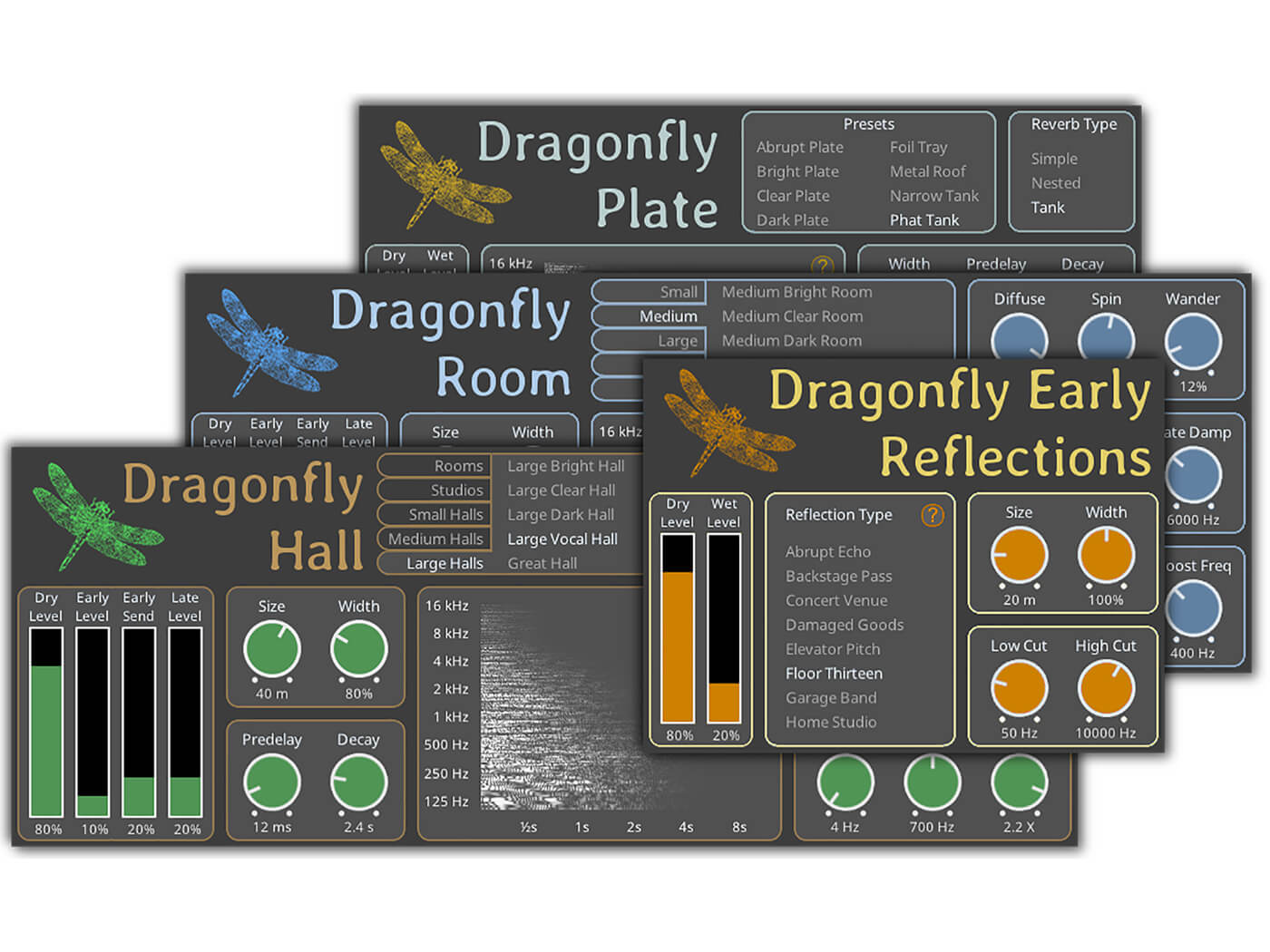 Dragonfly Reverbs is a bundle of four reverb plug-ins, consisting of Hall Reverb, Room Reverb, Plate Reverb and Early Reflections. As their names imply, each is dedicated to a particular flavour of reverb and sports a simple to use UI.

There are controls for controlling the width, pre-delay and decay of the reverb, as well as low- and high-cut knobs, and a dampen control for tonal flexibility. There’s also a spectrogram, which gives you a better idea of how each plug-in is affecting your output signal. 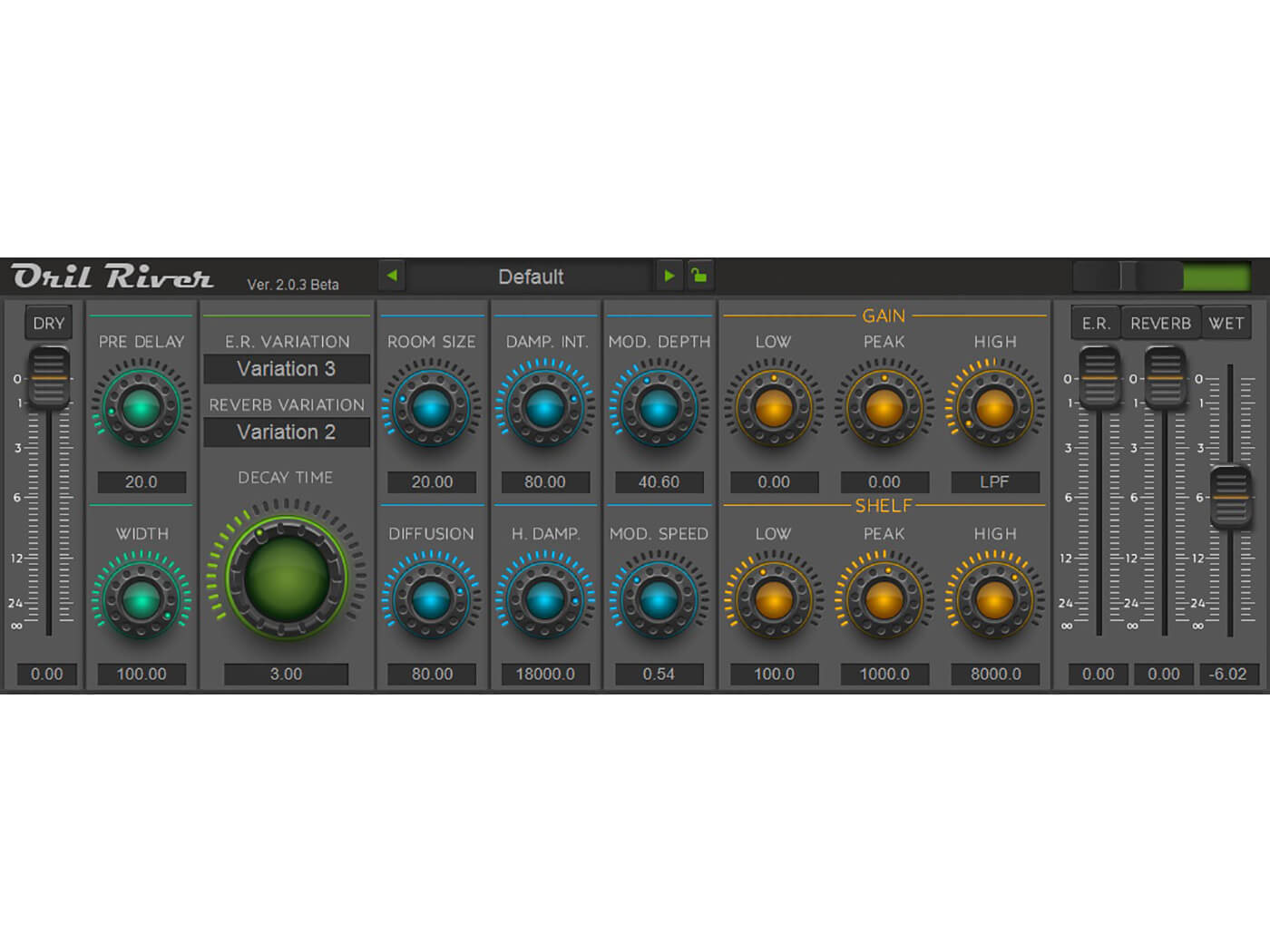 OrilRiver produces a vast range of room sizes and a fantastic range of sounds, leading some to say it might just be the best freebie reverb out there, at least in the ‘traditional reverb’ sense.

You get useful additional EQ and damping sections plus controls over early reflections, reverb tail and pre-delay which adds to the flexibility. Sure, others in this round up push the envelope further sonically but if you just want a workhorse reverb, download this immediately. 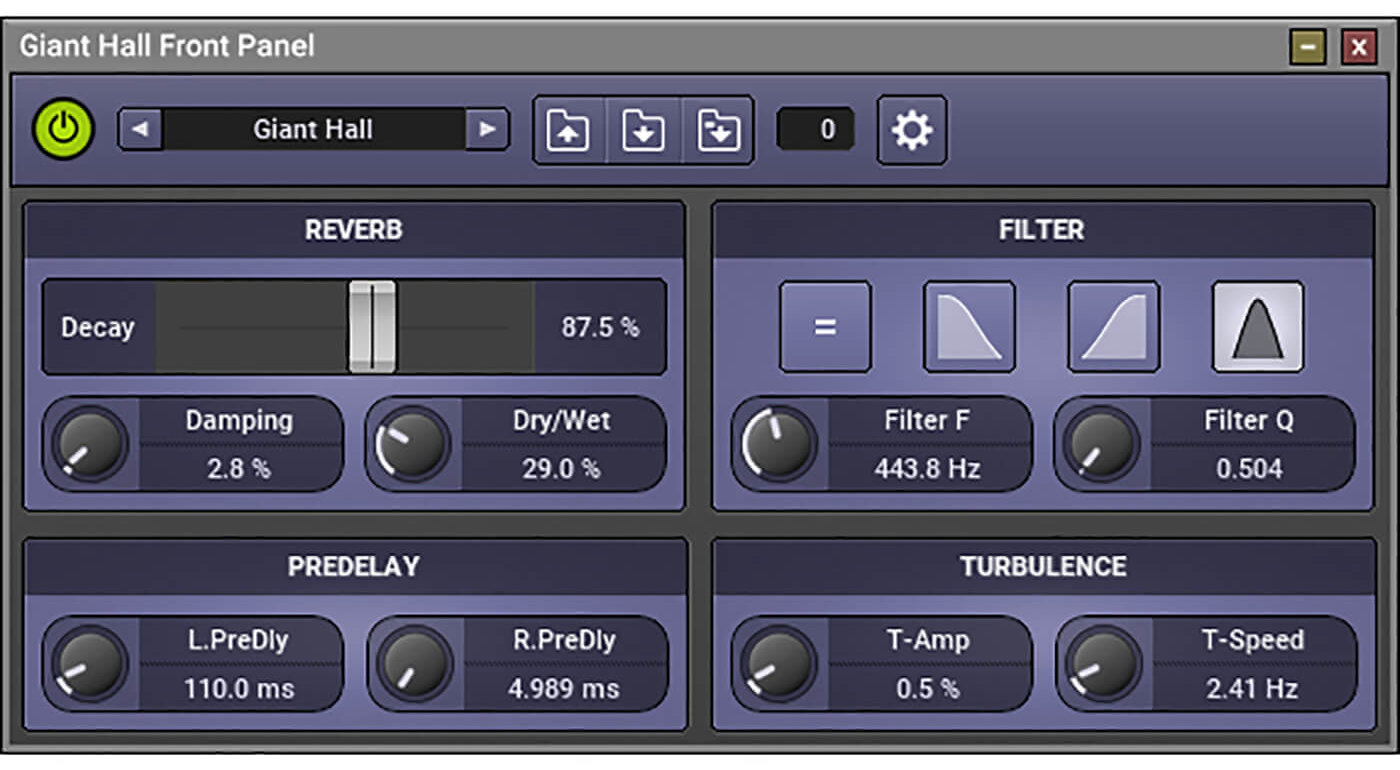 MuVerb is part of MuTools’ MuLab and MUX Modular plug-in bundles, but you can download it directly, on its own, from the link below and we’d advise you do as it sounds fantastic.

It does work better on more ethereal tuneage and would make part of our starter studio for ambient composers. That’s because it scores highly for tweakability, especially in its Filter and PreDelay sections, which allow for an exceptional degree of tonal variation. 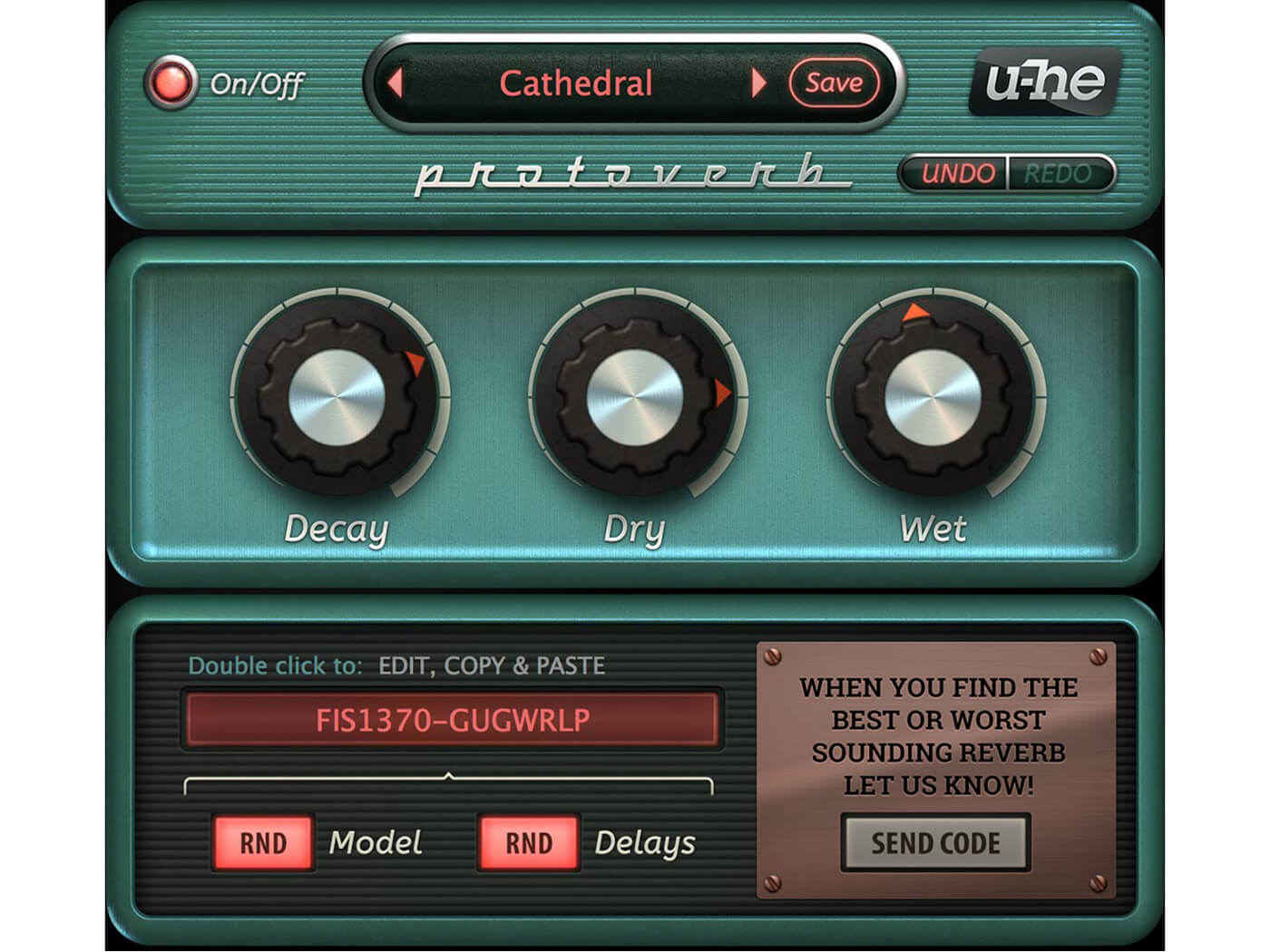 We love the idea of this one. Not only is it made by an ace developer – u-He makes some of the best plug-ins around – but it’s called ‘Researchware’. That’s because users are encouraged to send their best (and worst) reverbs to u-He for them to include as future presets.

Instead of following the approach that many other reverb designers make, where specific room modes are avoided for smooth reverberation and ambience, Protoverb goes the other direction. Protoverb is a room simulator, deliberately mimicking the resonances you’d find in a room. The results can vary wildly, and requires some trial and error, but there are great sounds available from it, too.

OldSkoolVerb is probably the most musical reverb here, at least in the traditional sense. You get five Reverb Modes – including Slapback, Reverse and Deep – Damping controls and a three-band EQ meaning there’s a lot of flexibility in your reverb sound and how it is applied.

There’s also control over the Space and Width. Unsurprisingly, spatial imaging is where it excels, especially when you increase room size through the 18 presets from the vintage plate up to large halls. And the sound?

Well, it’s a lot better than you might expect from a free reverb and well suited to all sorts of musical applications, though Voxengo suggests using it on vocals, piano and pad sounds.