If you’re working with any external audio equipment, an audio interface is essential. We’ve rounded up some that will be sure to give you your money’s worth. 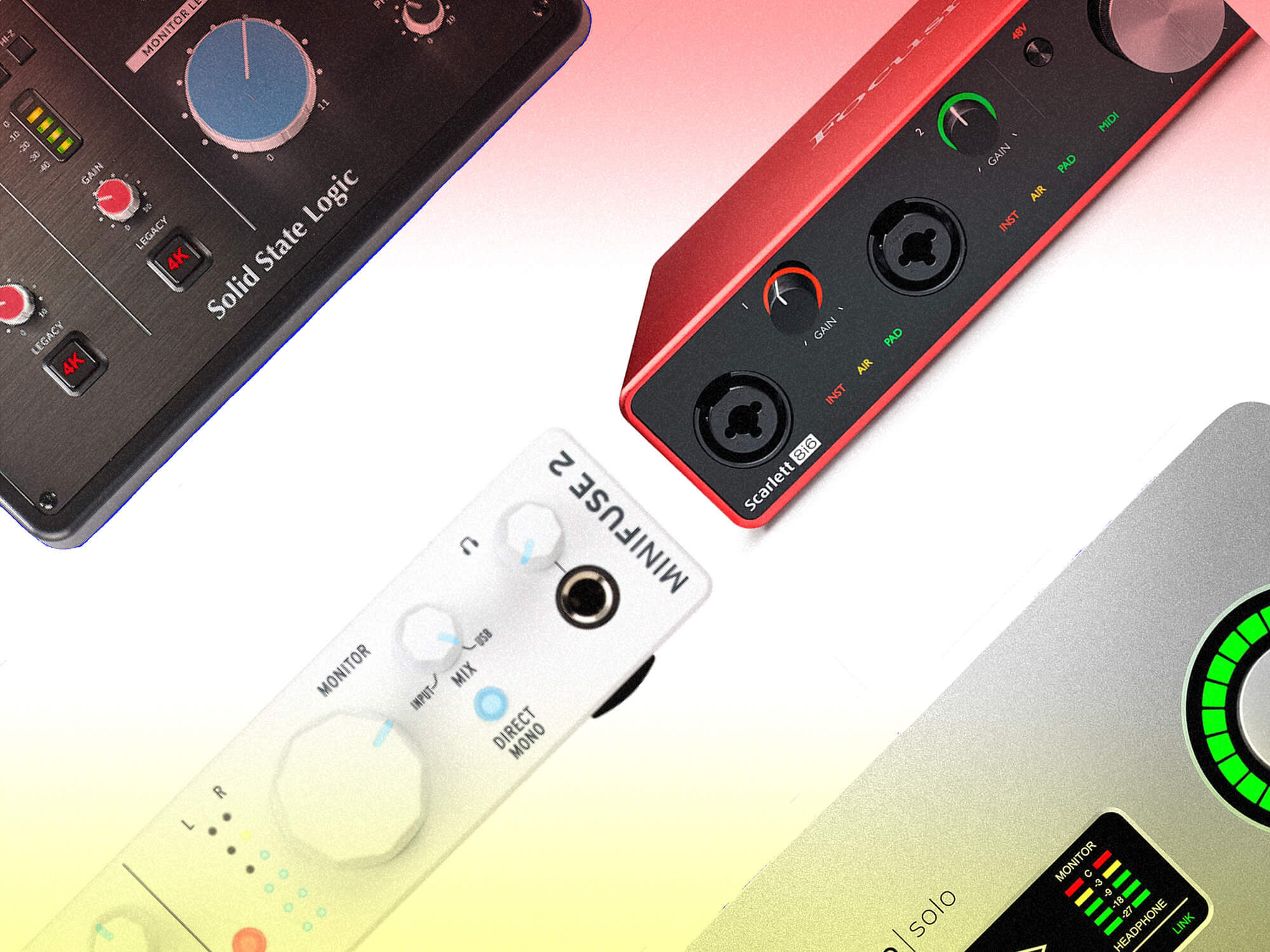 Once you’ve set up your studio with various pieces of hardware, you’ll need an audio interface to convert signals to a format your DAW understands. Without an audio interface, you can’t record or moniter sound you’re making with your hardware. But with a huge variety of high-end luxury audio interfaces floating around the internet, finding the right one can be a frustrating burden on the brain – and bank.

If you’ve got a small band to record or a few of your own instruments to hook up to your DAW, these 10 audio interfaces are ideal. Most of them are portable and come with production software bundles, so travelling between studios and capturing high-quality audio is easy. Best of all, they’re all under $500. 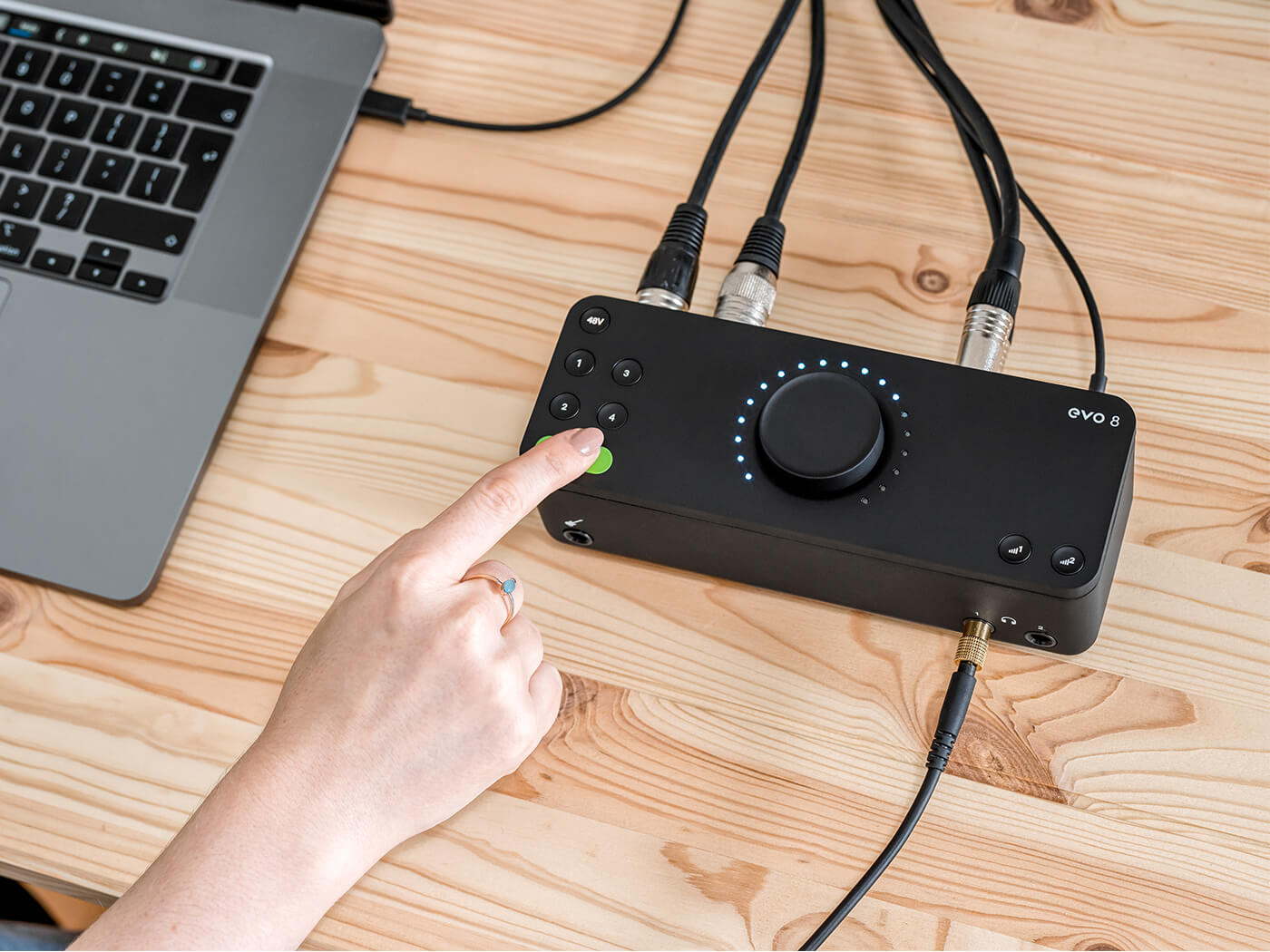 Audient’s EVO 4 made an appearance in our last audio interface guide, and its big brother is just as deserving of a spot in this list. The British brand is renowned for its high quality, intuitive audio interfaces. EVO 8 upholds this reputation in a small form factor with impressive versatility. You’ll get four inputs with high-performance mic preamps and four outputs, plus a host of smart features to help streamline your set-ups.

EVO 8’s Smartgain automatically sets the gain levels when it picks up the signal from your sources, while two smart touchpoints grant control over speakers, headphones and channels with one volume encoder. The USB-C compliant interface also has SmartMuting, which automatically mutes your speakers when connecting headphones. Audient’s interface is ideal for home producers and content creators looking for a bit more flexibility.

We said: “In all, the Evo 8 is an excellent and full-featured interface, especially for the price. If you’re a podcaster, streamer, bedroom musician, or any combination thereof, we can’t recommend this interface highly enough.”

With the legacy of Bill Putnam Sr. behind it, Universal Audio knows a thing or two about creating stellar audio products. The UA Apollo Solo is an update to the revered Arrow interface, featuring the brand’s proprietary Unison preamps that model vintage gear for recordings with more character. UA’s new recording system, LUNA, is bundled in with the interface along with emulations of Marshall Plexi Classic Amp, Pultec Pro EQ, UREI 1176 Compressor, Ampeg SVT-VR Classic Bass Amp and more.

Apollo Solo lets you hook up three instruments using two combo inputs (XLR / 1/4″ jack) and a Hi-Z instrument input on the front panel – ideal for guitars, synths and keyboards. It’s pretty compact, so it’ll sit nicely on your desk and sports a straightforward layout with clear visual displays to keep an eye on levels. This interface is a great all-round solution and gives you a comprehensive music production package, so you can get creating straight away.

Find out more at uaudio.com. 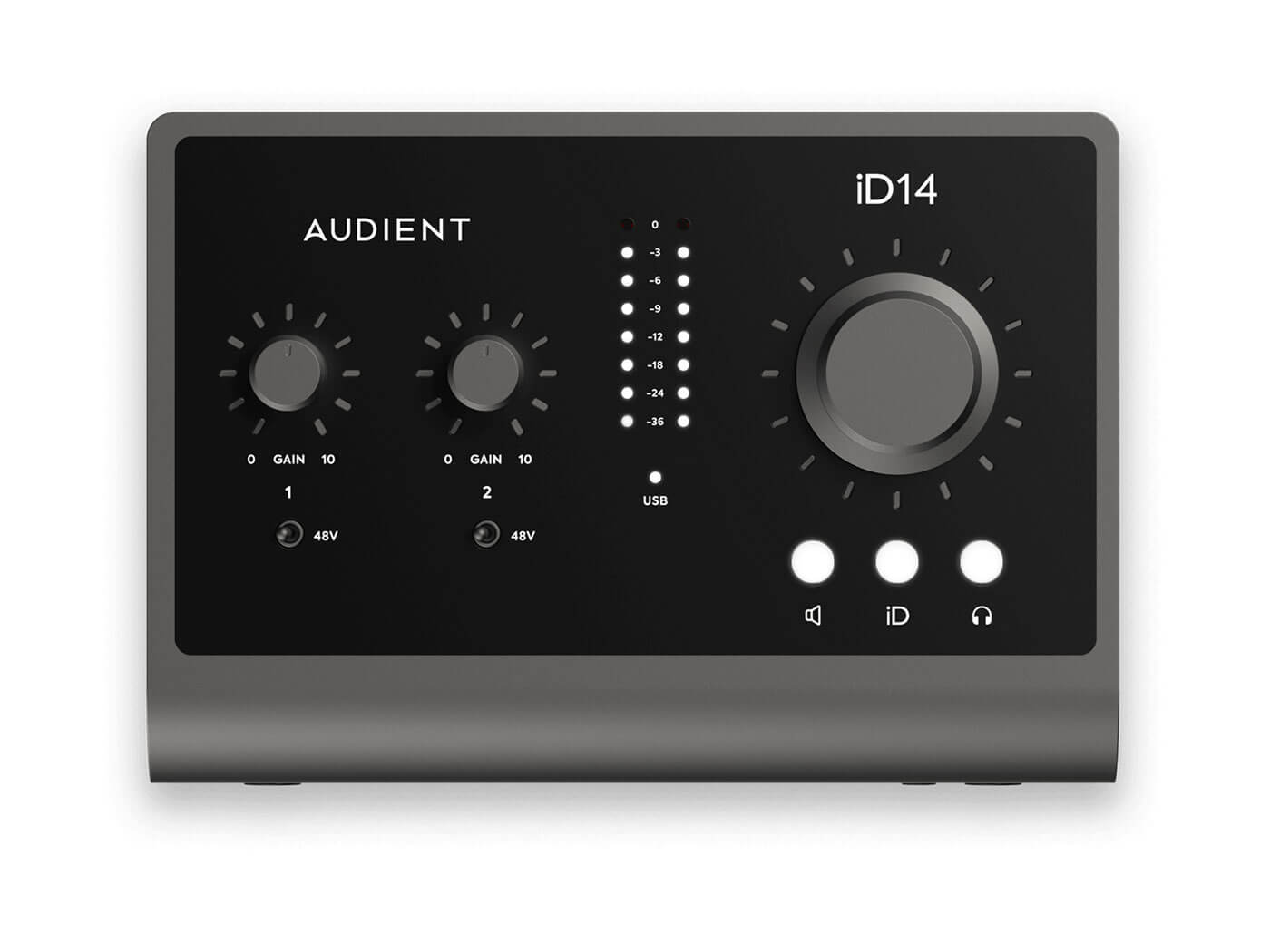 Audient’s newest interface is the iD14 MkII, a 10-in/6-out interface that builds on the success of its predecessor. Powered by USB 3.0 and USB-C, iD14 MkII features two Audient ASP8024-HE Console mic preamps with ADAT expandability and a JFET instrument input. You’ll get 120db of dynamic range from iD14’s A/D converters for serious clarity in your recordings. Audient says that the iD14 also boasts ultra-low noise and low distortion with a touch of analogue warmth.

With a plug-and-play approach, Audient’s all-metal iD14 is designed to be an easy recording solution for musicians. It also replicates the input of a classic valve amplifier, which guitar players might find useful. The interface comes with Cubase LE and a range of plug-ins and virtual instruments to instantly lay down comprehensive ideas.

We said: “The iD4’s two output channels are sent to both the rear panel output jacks and the built-in headphone amp that drives the 6.35mm and 3.5mm headphone sockets on the front panel. A pleasingly chunky rotary encoder controls the output level, with the current level indicated on the 5-part LED meters that arc over the top of it (these act as level meters when you aren’t interacting with the knob).” 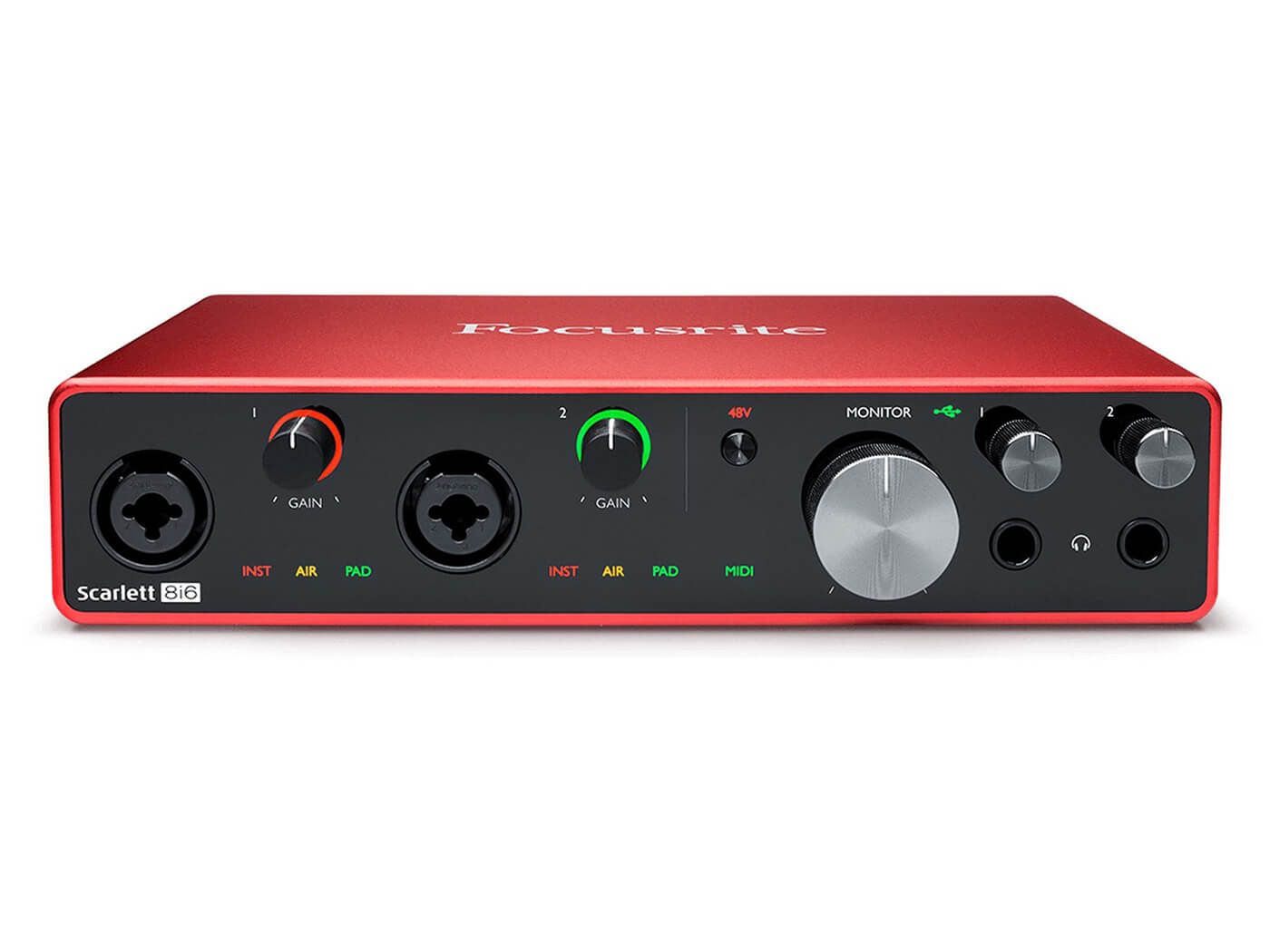 Focusrite’s audio interfaces are some of the most popular on the planet. This is mostly due to their affordability and vast range of sizes available on the Scarlett and Clarett ranges. A step down from Focusrite’s crimson champion, the 18 input, 20 output 18i20, the 8i6 is a mid-range alternative with eight inputs – including ADAT I/O – as the name suggests. The Scarlett 18i20 weighs in right on the money at $500.

In our review of the Scarlett range, we said: “The 8i6 features two combi instrument and mic inputs around the front with two mic preamps. There are a couple of headphone outs plus level control, again with gain halos. Around the back you get S/PDIF I/Os, MIDI Input and Output, plus a further four inputs for line-level instruments (synths, drum machines etc), so with decent MIDI- and line-input specs, Focusrite is certainly acknowledging the growing hardware-synth scene with this one.”

Native Instruments’ 6-in/6-out interface was listed in our best audio interfaces under $300, but it’s hard not to award it a place here, too. The Berlin-based audio manufacturer is renowned for its catalogue of pro-grade software, which is always neatly integrated into its intuitive hardware. With Komplete Audio 6, you’ll get a handful of plug-ins, lite versions of Ableton Live and Traktor DJ software, plus Komplete Start to give you a taster of NI’s wider offerings.

Recording into the interface is achieved via two mic/line combo inputs, two 1/4” inputs with two preamps and 2 SPDIF digital inputs. Phantom power is included for when you’re using a condenser mic. Four TRS outputs, two SPDIF outputs and two headphone outputs should be plenty of options for the average bedroom studio. This is a major bargain for beginners and pros alike.

Find out more at native-instruments.com. 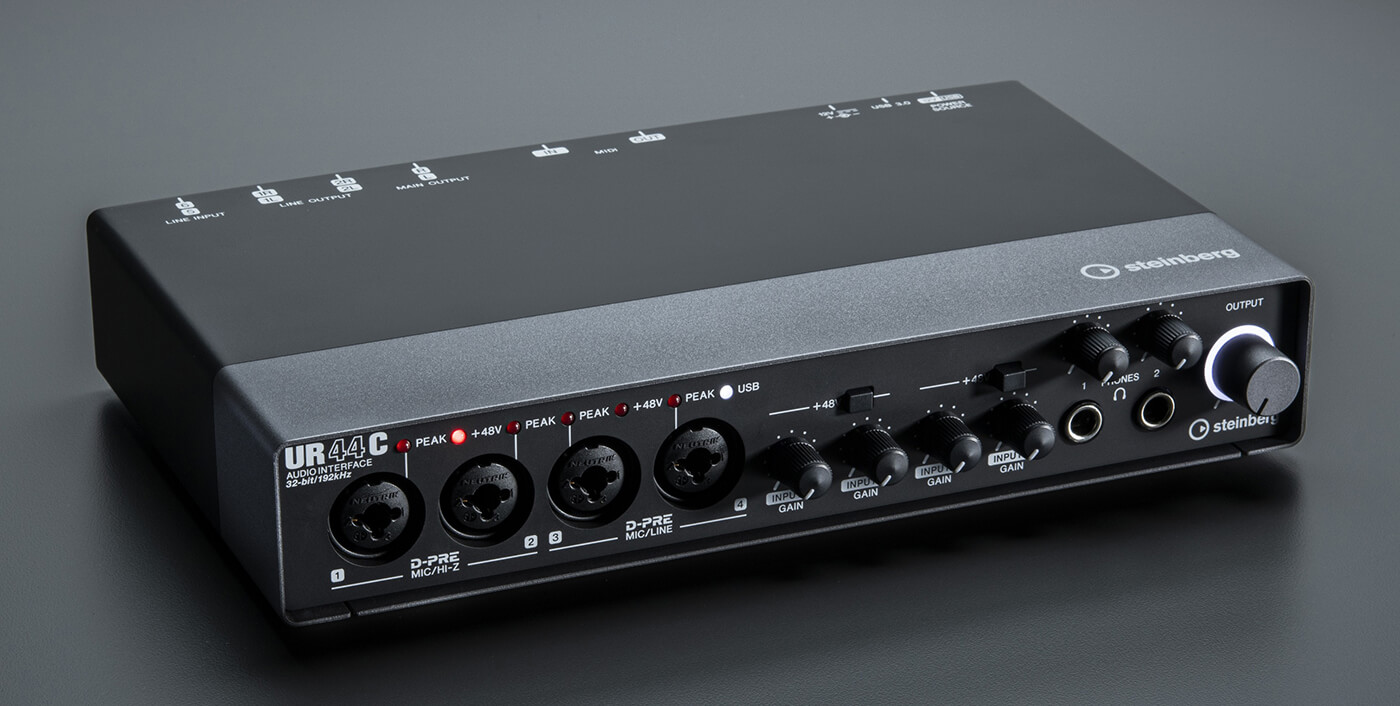 Steinberg’s UR-C series comprises a range of USB-C-equipped audio interfaces aimed at musicians and bands in need of a portable high-quality recording solution. The UR44C sports enough inputs for a small band with four combo inputs and two TRS inputs. Thanks to its high-quality converters, you can record at an impressive audio resolution of 32-bit/192kHz.

Find out more at steinberg.net. 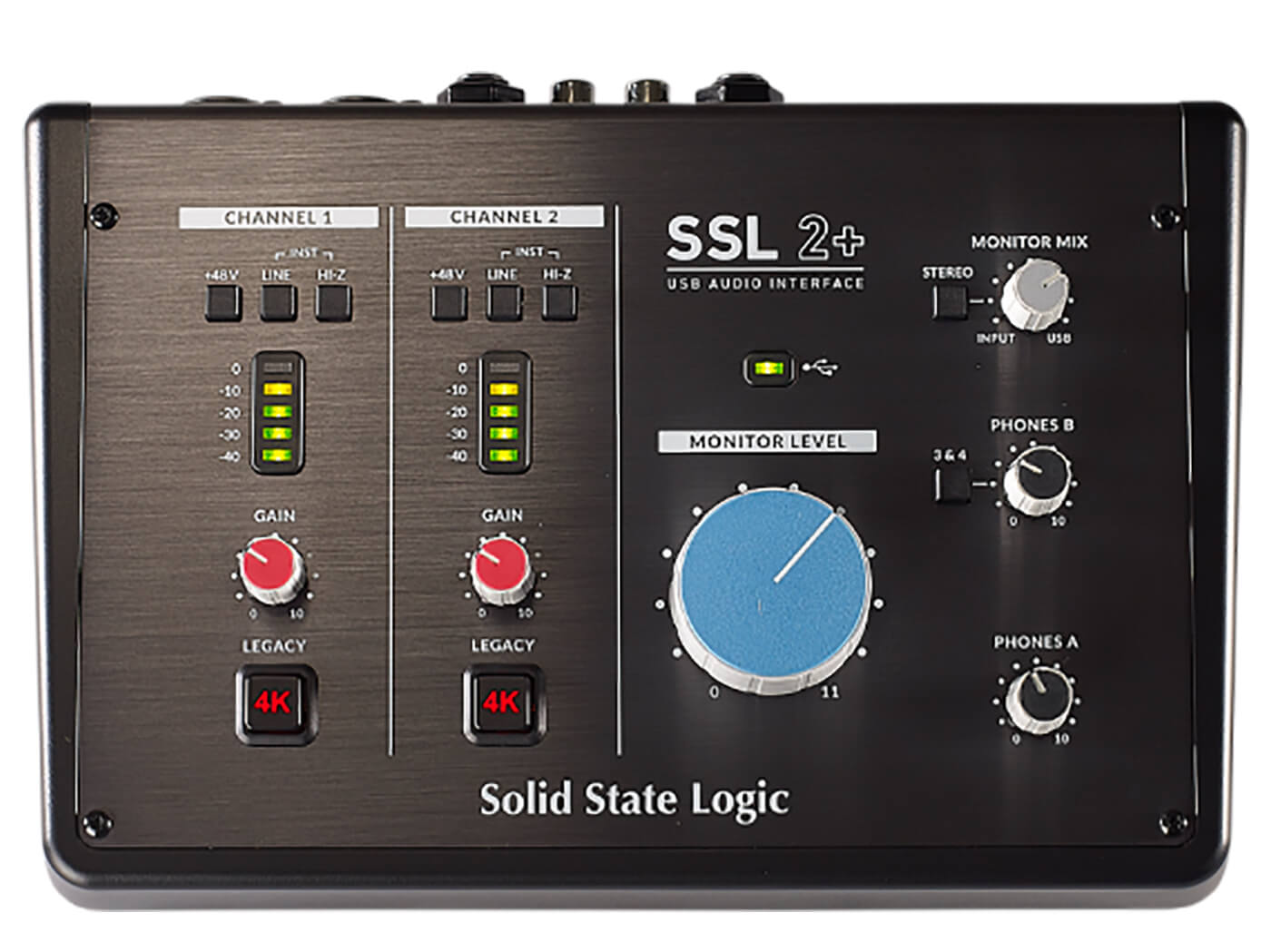 The legendary SSL sound was previously only achievable in high-end studio equipment – until the SSL 2 and 2+ were released in 2020. The SSL 2+ brings the feel of classic recording to an affordable package with a simple, compact interface. Hit the 4K Legacy mode buttons to apply the sound of SSL’s 4000 series analogue console. Two combo inputs and four outputs are onboard, plus MIDI In/Out connections.

You can record to your laptop with USB-C connectivity in 24-bit/192kHZ resolution. In our review, we said: “Whether you’re just getting started with music-making or you’re looking to kit out a portable or work-from-home rig without breaking the bank, the SSL 2 and SSL 2+ will fit your needs fabulously. There’s a great deal of choice in this area of the market but the bundle that SSL has put together here makes these interfaces a match for beginners and experienced producers alike.” 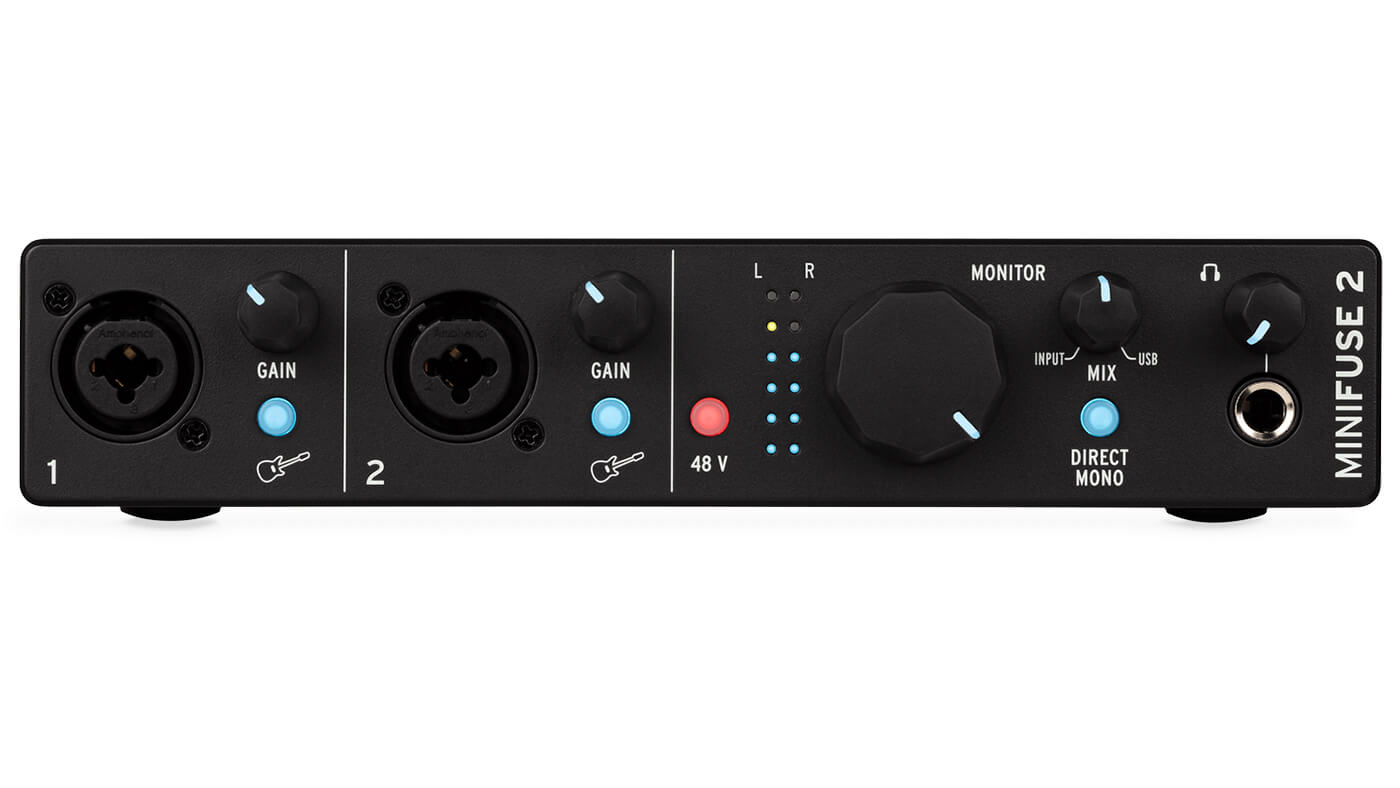 Arturia’s Minifuse 1 and 2 were both released together in September 2021. It’s the bigger brother, the Minifuse 2, which we’re focusing on today, as it boasts a range of functionality, such as a USB port to plug in your USB devices, all at a relatively affordable £120.

The Minifuse 2 is sonically impressive, offering a nice wedge of volume while leaving plenty of headroom. But it doesn’t just sound clean, it looks elegant, too, with a compact casing that won’t take up too much space on your desktop.

In our review, we said: “The MiniFuse interfaces are ideal for podcasters, singer-songwriters and, in the case of the MiniFuse 2, producers wanting to incorporate MIDI hardware into their workflow. There’s nothing hugely complex to figure out; just plug in, set your level, and record. Results are commendable and there’s minimal cabling to worry about. Factor in the support for iOS and you’ll find these units superbly capable of recording music on all your devices.” 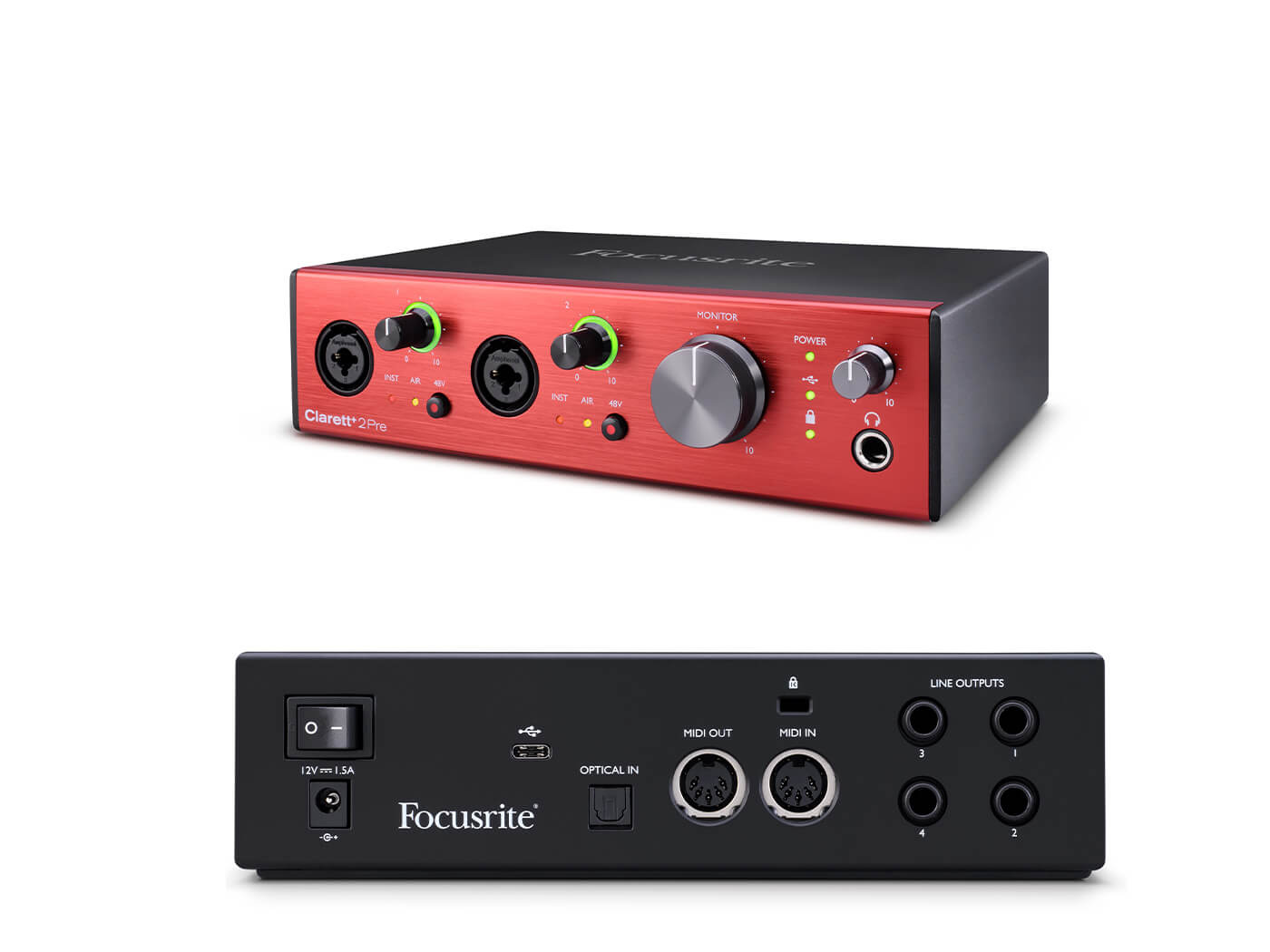 Focusrite’s Clarett+ 2Pre’s unique sound comes from its interesting backstory: After a fire wiped out the the manufacturing plant of AKM, one of the world’s leading suppliers of AD and DA converters, in October 2020, Focusrite were forced to completely recircuit their next interface around an entirely new converter.

This risky strategy clearly paid off, however, with the latest offering from Focusrite, the Clarett+ 2Pre, sounding as crisp as ever. In our review, we said: “If you’re simply in the market for a mid-priced, high quality, great-sounding, well built and downright handsome audio interface, then you’ll find few that fit the bill as well as the Clarett+.” 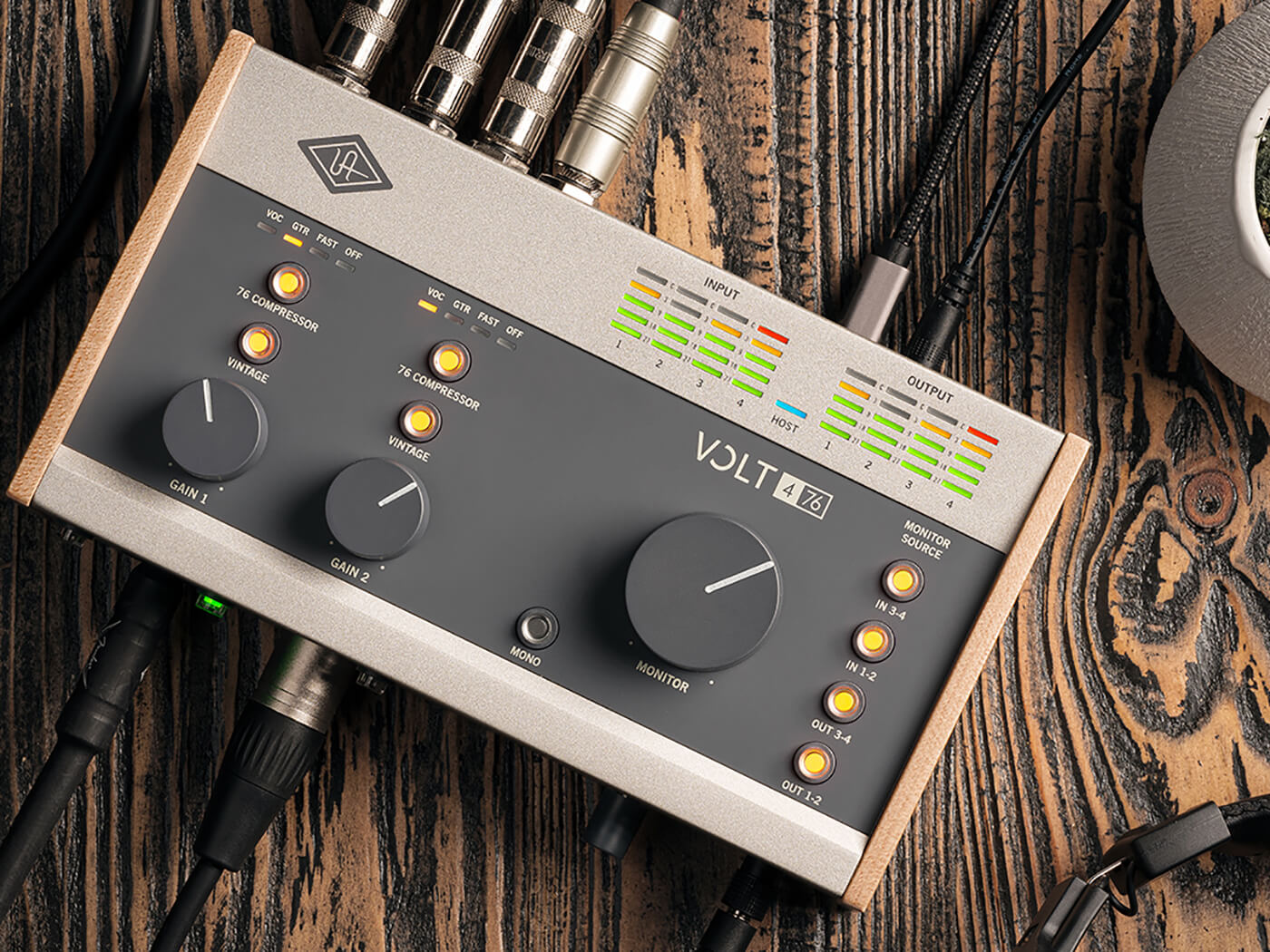 Universal Audio’s Volt range is a hell of a lot of rich audio interface expertise for your money, whichever model you choose. They sound incredibly warm, with vintage preamp modes and analogue circuitry inside. The difference between the Volt range and UA’s much-loved Apollo range, is that they’re more affordable and practical for mid-range producer looking to build a smaller studio.

In our glowing review of the Volt range, we said: “The vintage preamp mode lends character and a sheen of quality to your recordings that belies the affordability of the hardware – this is especially true of the standard models, which are very competitively priced.”