Under The Hood: Thinking About You by Sailor & I

In the run-up to the Swedish producer’s next album, Diving For Lost Treasure, he walks us through the emotive and upbeat single. 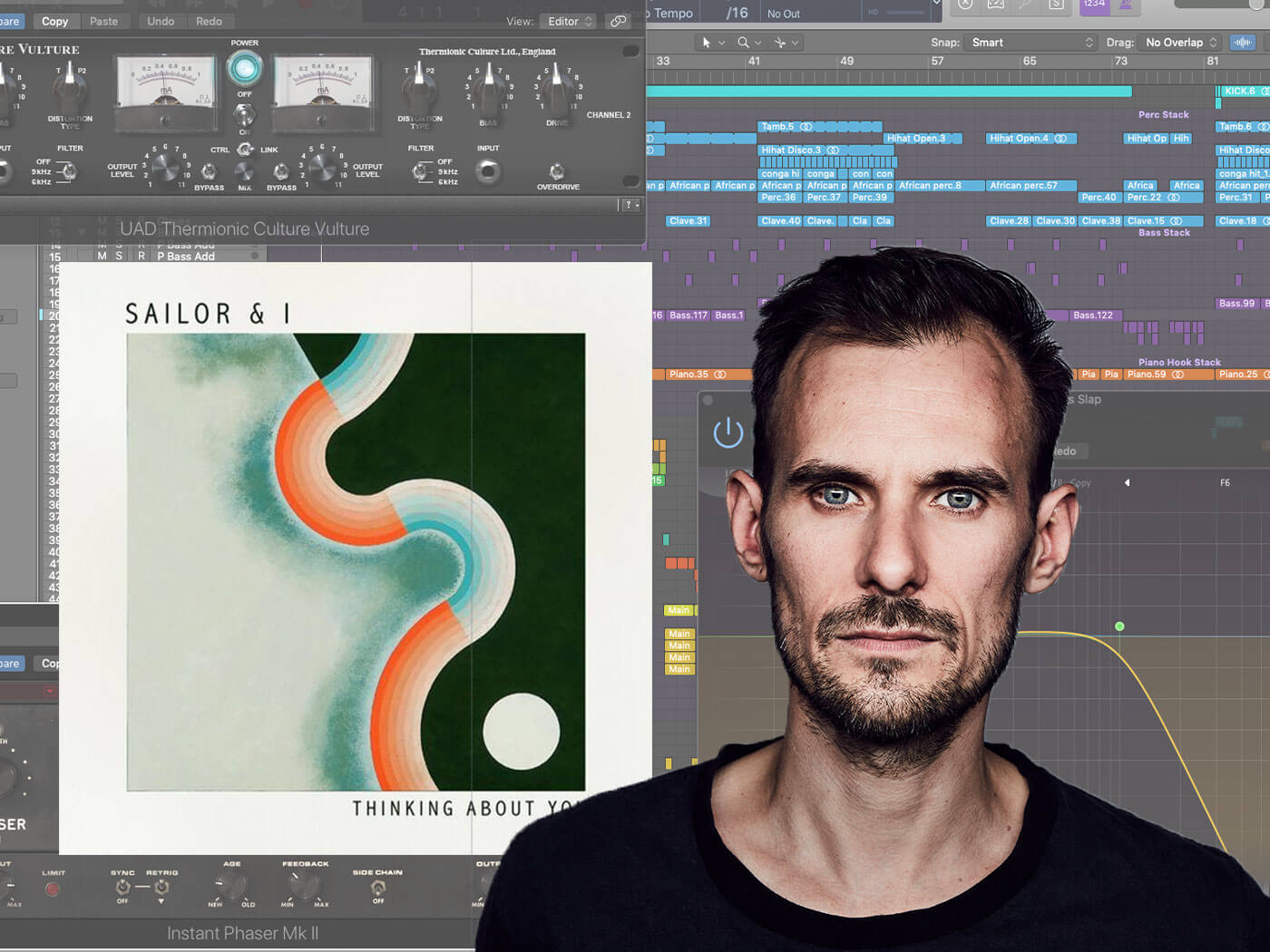 The future’s looking bright for electronic music producer and multi-instrumentalist Alex Sjödin, better known as Sailor & I. He’s already seen success with his previous works, receiving support from Pete Tong, Resident Advisor, Spotify and mau5trap. An enviable roster of artists have remixed his music, including Ame, Maceo Plex, Paul Woolford, Kidnap Kid, Junior Sanchez and Joris Voorn. When we spoke to Alex, his track with Ukrainian DJ duo ARTBAT, Best Of Me, was sitting comfortably in the Beatport Hot 10.

Sailor & I’s next album, Diving For Lost Treasure, is a collaborative project with fellow producer Tobias Kampe Flygare. As is the case with a great deal of music in 2020, part of the album was completed remotely during lockdown. “Alex sent me folders with stems and from there I worked with what I liked and added what I thought could contribute to the songs”, Tobias told us. 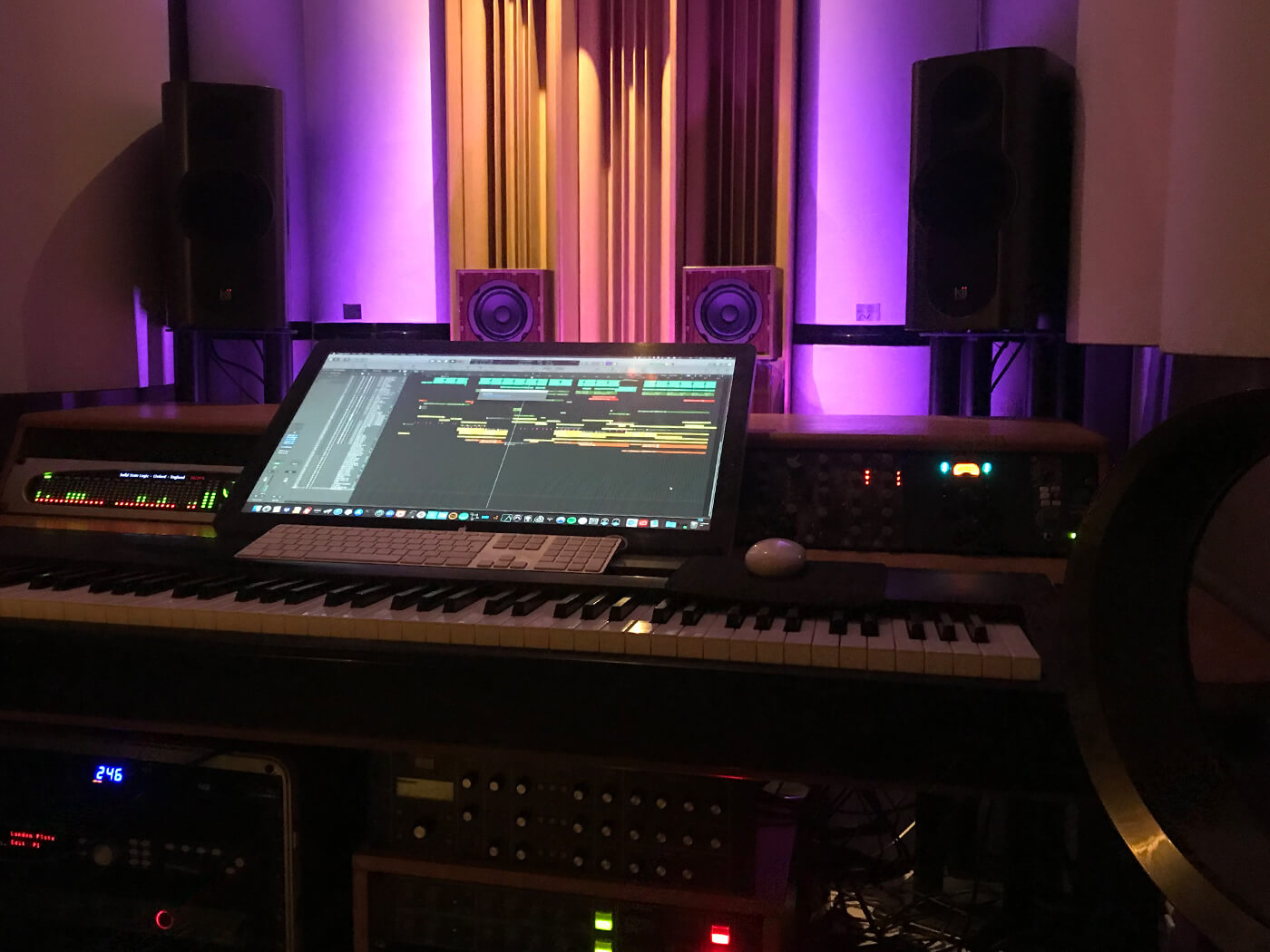 In this Under The Hood interview, Sailor & I takes us through the session files of the album’s single, Thinking About You and provides insight into the production process.

For reference, here’s the track. We’ll be referring back to specific points in the track so you may want to open it up in another window.

Alex and Tobias share a passion for analogue equipment, but, as they know, a harmonious relationship can be made with tools in the digital realm. “We both enjoy vintage synths that need love and care”, Alex tells us. “Although software synths sound great, too. We also like to work quickly without looking at the screen too much. Improvising synth parts and then comping them together was definitely the case with Thinking about you”. 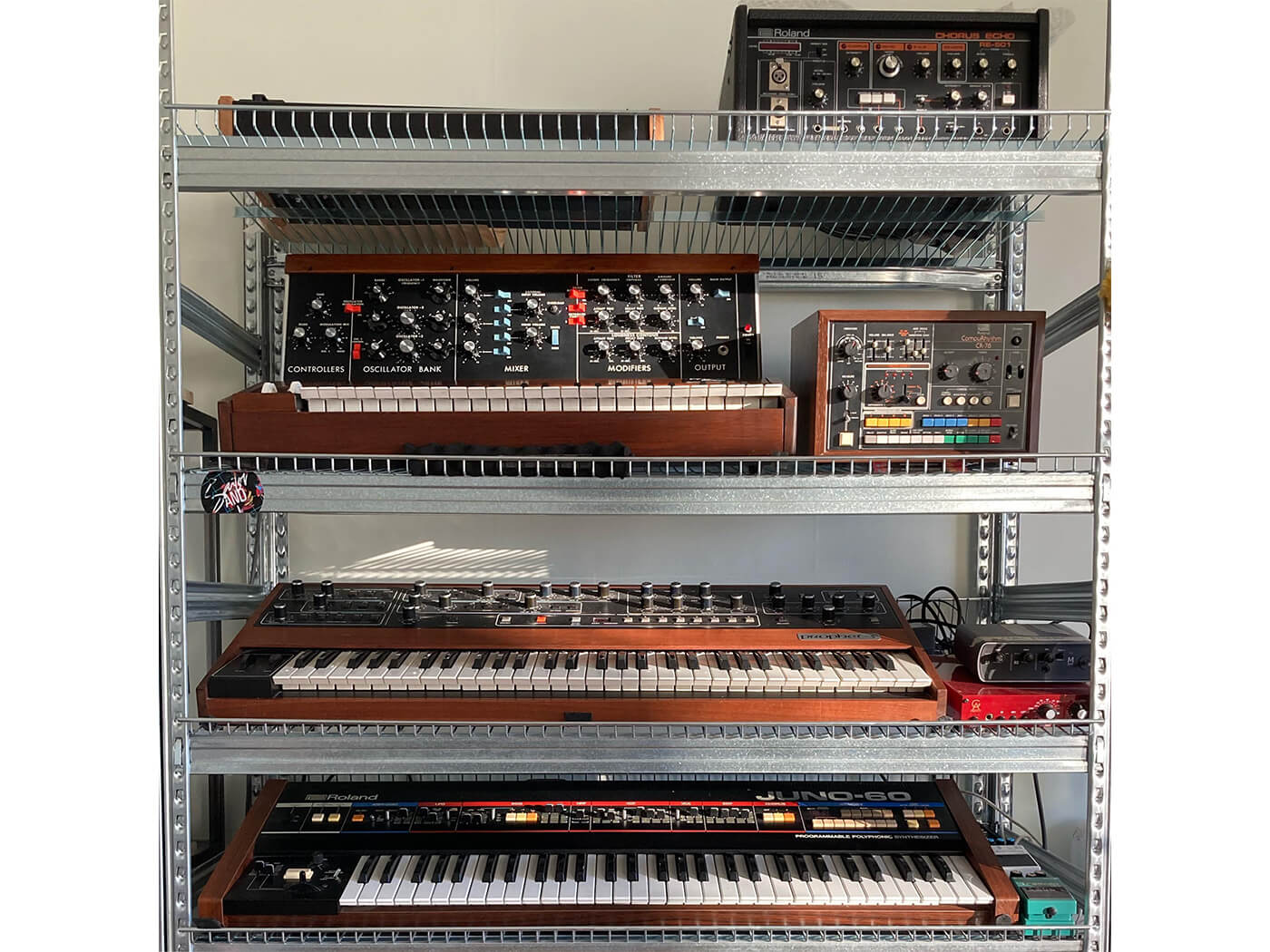 Piano: Thinking About You kicks off with a bouncy piano playing a chord progression that carries on throughout the entire track. The soft and lo-fi tone is achieved via a chain of plug-ins – including the piano itself. “The piano comes from the Imperfect Samples Schimmel Piano library”, Alex tells us. The MIDI data of the progression is written with low velocity to accentuate the second harmonics of the chords.

For shaping the sound of the piano, Alex made use of Oeksound’s increasingly popular dynamic resonance suppressor plug-in, Soothe 2. “I’d just updated to Soothe 2 and played around with some Piano settings to tame some of the stronger harmonics from taking over” he explains. Alex deployed the Hard Piano preset to bring down resonances around the 250 to 2kHz range while allowing the higher frequencies to glisten. 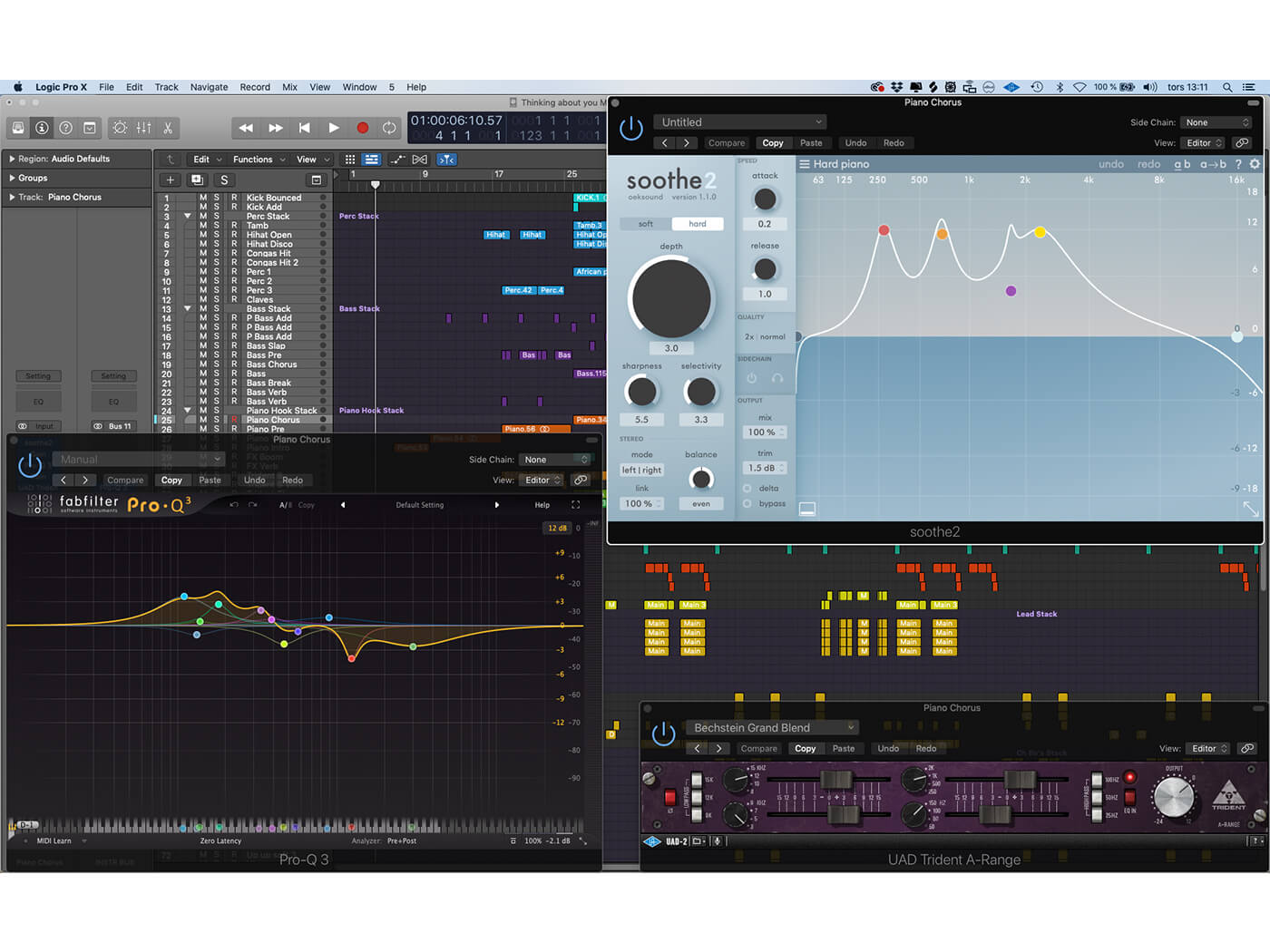 “After that, I use FabFilter’s Pro Q3 and UAD Trident A-Range”. The Pro Q3 is used to bring back the warmth of the piano, now that the resonances have been attenuated. The Trident A-Range, modelled after the legendary hardware EQ heard on iconic British rock music, is used to slightly boost the 1-3kHz range, and a touch of gain on 12kHz. Once EQ is applied, Alex uses Brainworx bx_digital V3 to widen the stereo image of the piano. 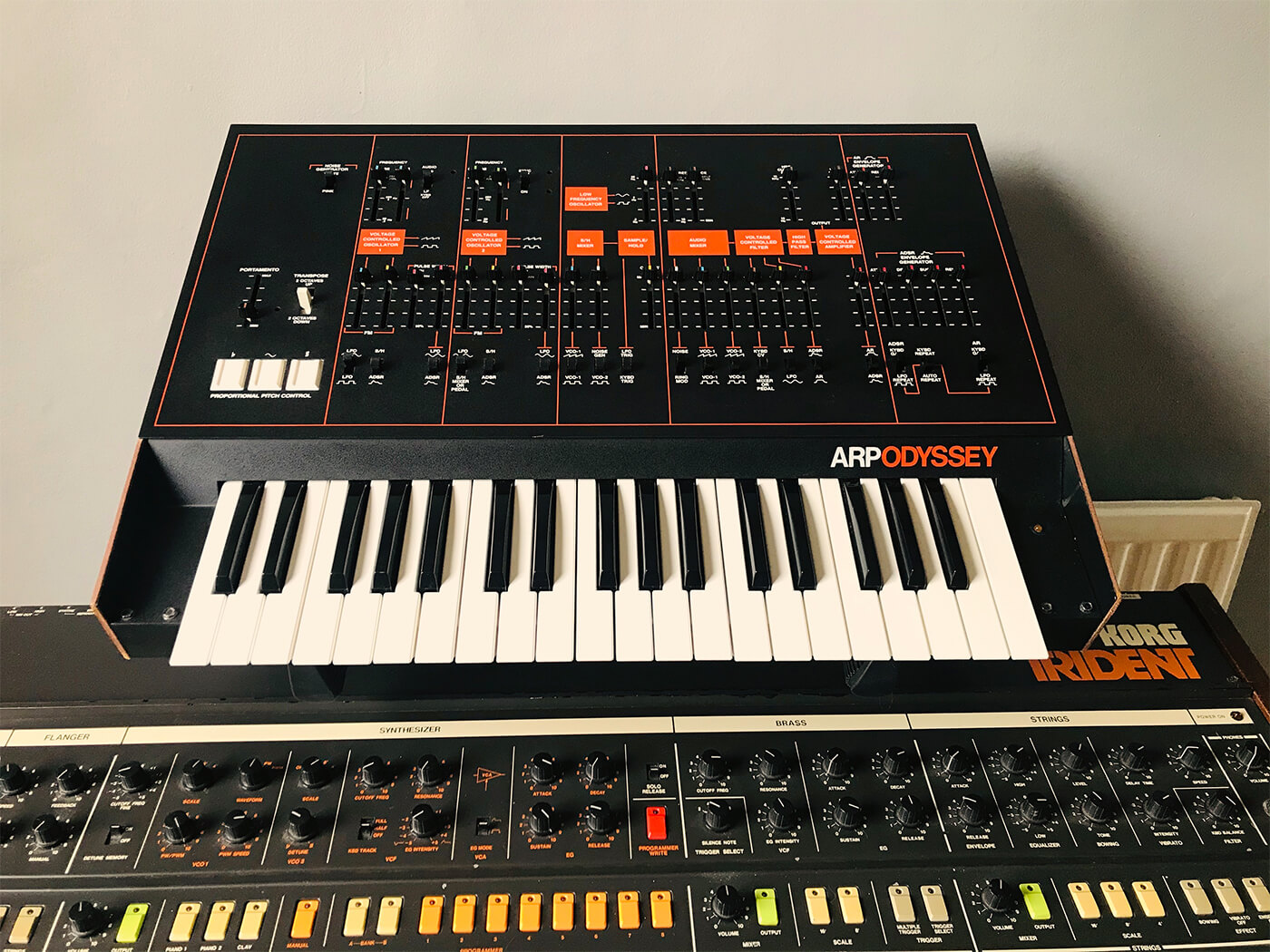 ARP Odyssey: The soft ARP Odyssey part can be heard from the first pre-chorus at 0:59, playing along with the vocals. Waves Soundshifter, a tool used for pitch-shifting and time-stretching, was later used to finalise the melody. Processing is kept fairly minimal with the Odyssey, with FabFilter’s Q3 being used to cut the harshest frequencies and a fair amount of low-end, too. Finally, SoundToys’ Crystallizer is added to the channel strip, with the Koursar preset for a little bit of width. 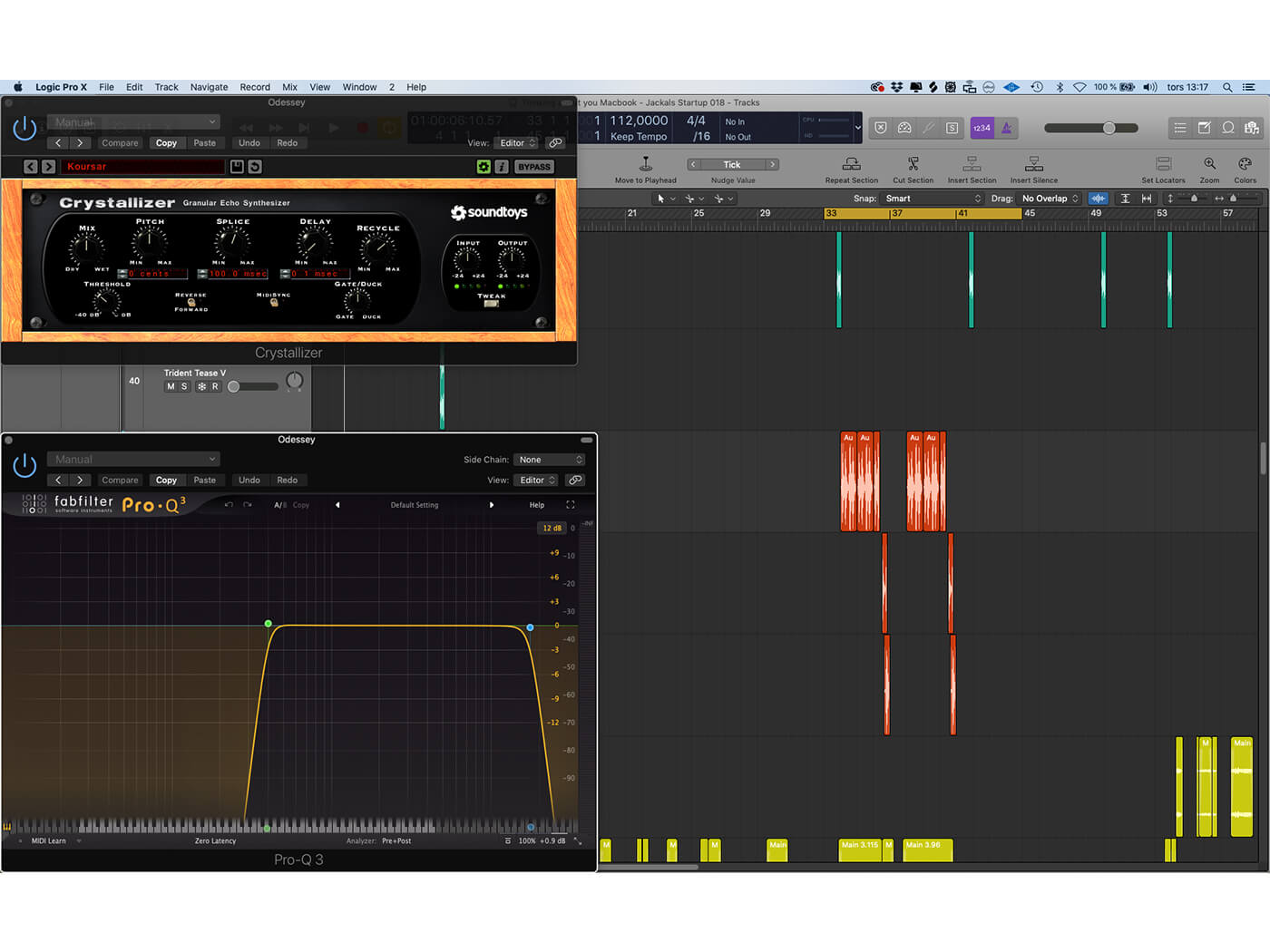 Bass: The gliding electric bass is a nice combo of MIDI programming and live bass, giving a deep tone and a natural groove. Alex tells us: “the bass was programmed using a Sample Magic pack based around 4th notes, with a tiny bit of sidechain applied. On top of that, a sloppier Precision bass was recorded to make it more vibrant, which added some authentic noise and imperfection, basically”. 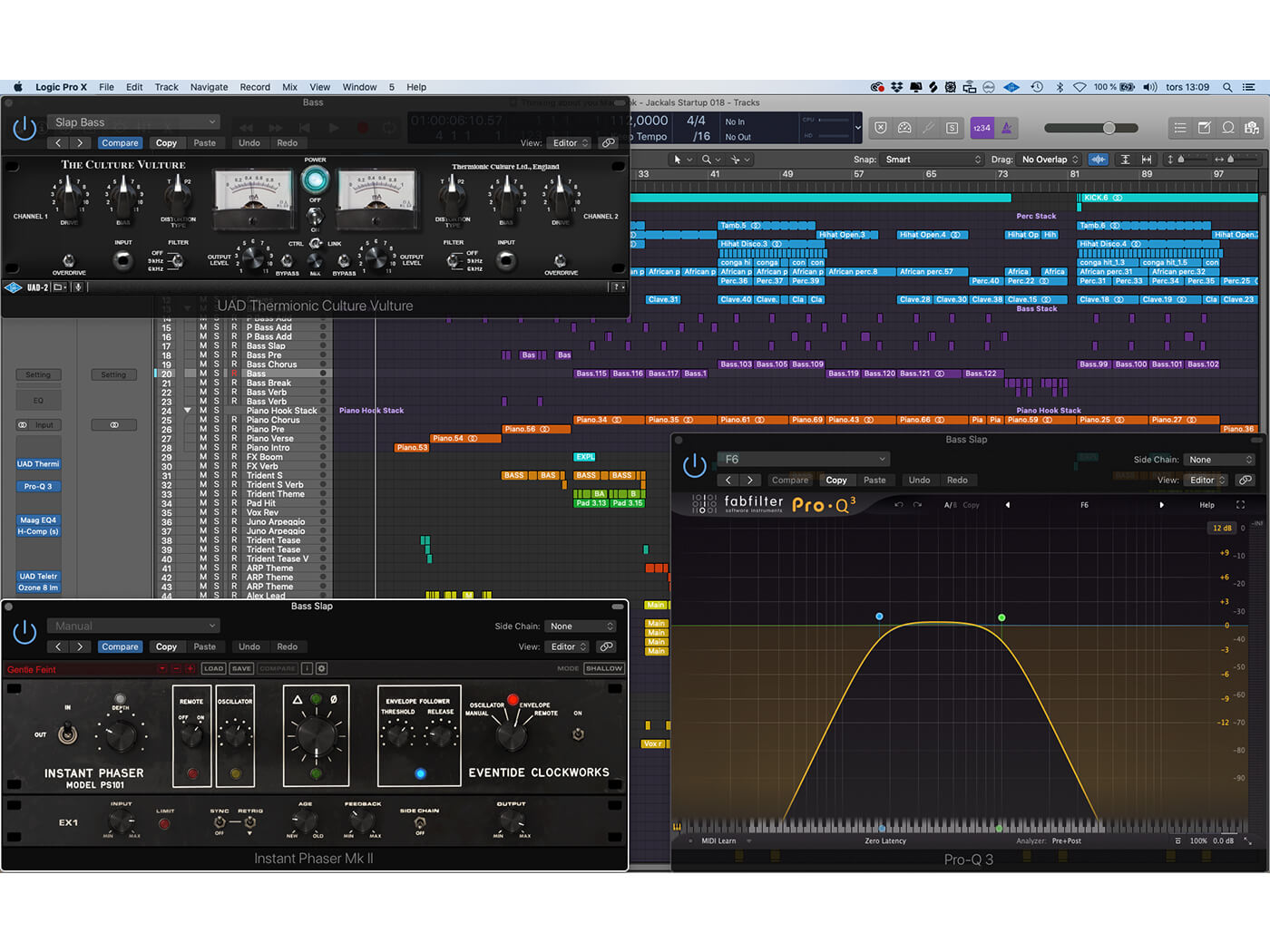 For processing the basslines, Tobias and Alex looked to their trusty companion, FabFilter Q3, along with a touch of Eventide’s Clockworks Phaser. UAD’s Thermionic Culture Vulture, based on Thermionic Culture’s hardware, polishes off the bass with some analogue-style saturation.

Synth arpeggio: A synth arpeggio sails into the chorus at 1:17 sec and goes solo at 2:43. “It was made with Logic Pro’s bell arpeggio synth. It was then pitched down an octave, – it just sounded more vivid that way”. Alex and Tobias processed the arpeggio further with some help from another Soundtoys plug-in. This time, Little Microshift, a stereo imaging tool that combines subtle pitch-shifting and delays. UA Culture Vulture’s warmth is peppered over the top, with Waves Manny Delay giving the arp some space. 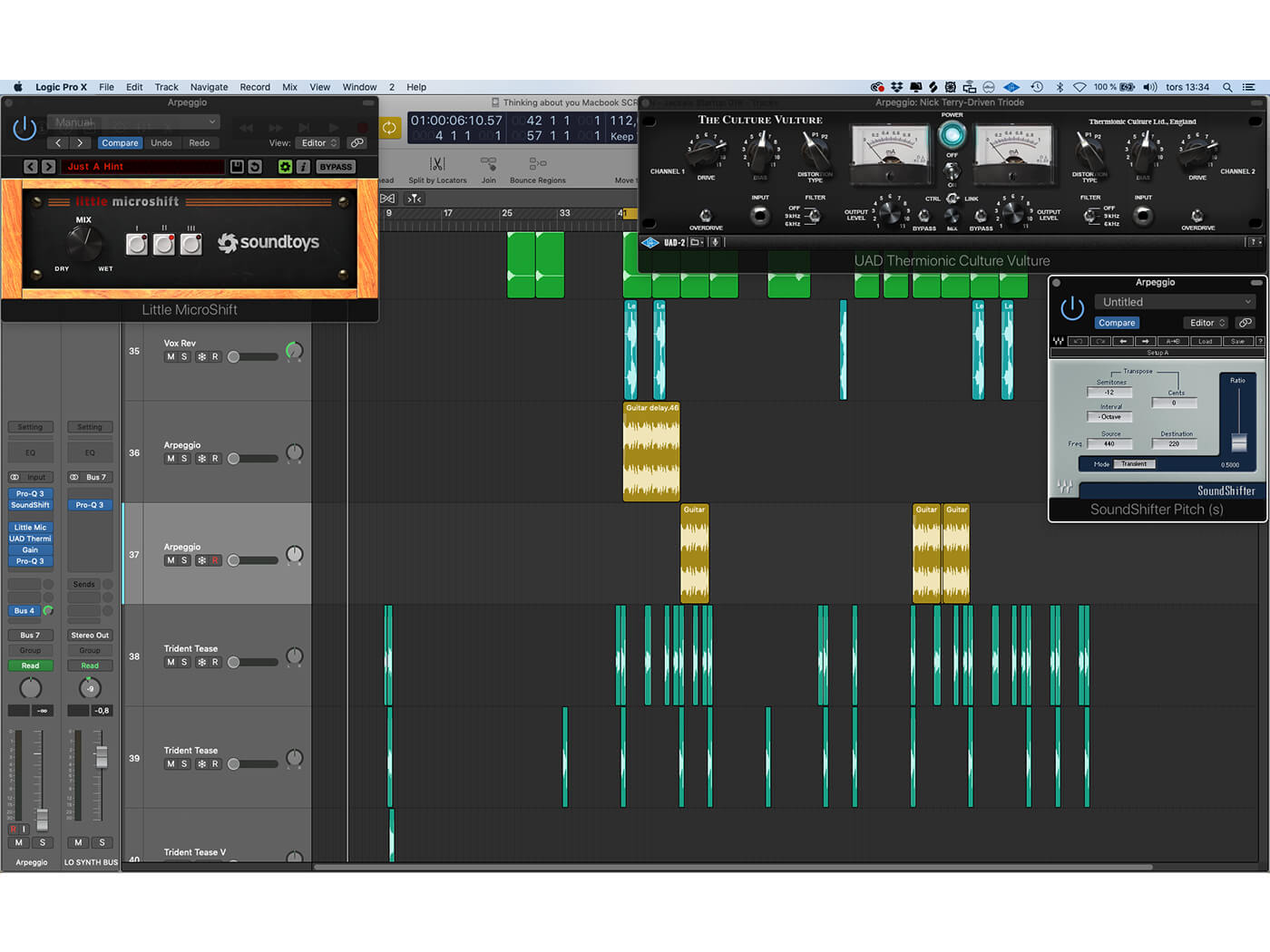 Korg Trident: “I love this synth”, Alex says “it definitely has it’s own sound and can sound a bit ghost-like. With an old Korg Trident, Sailor & I tease the listener with a subtle theme from the 80s machine. The Trident was run through Soundtoys’ Alterboy to apply some harmonic texture with Crystalizer and Eventide Blackhole giving the part some ambience. 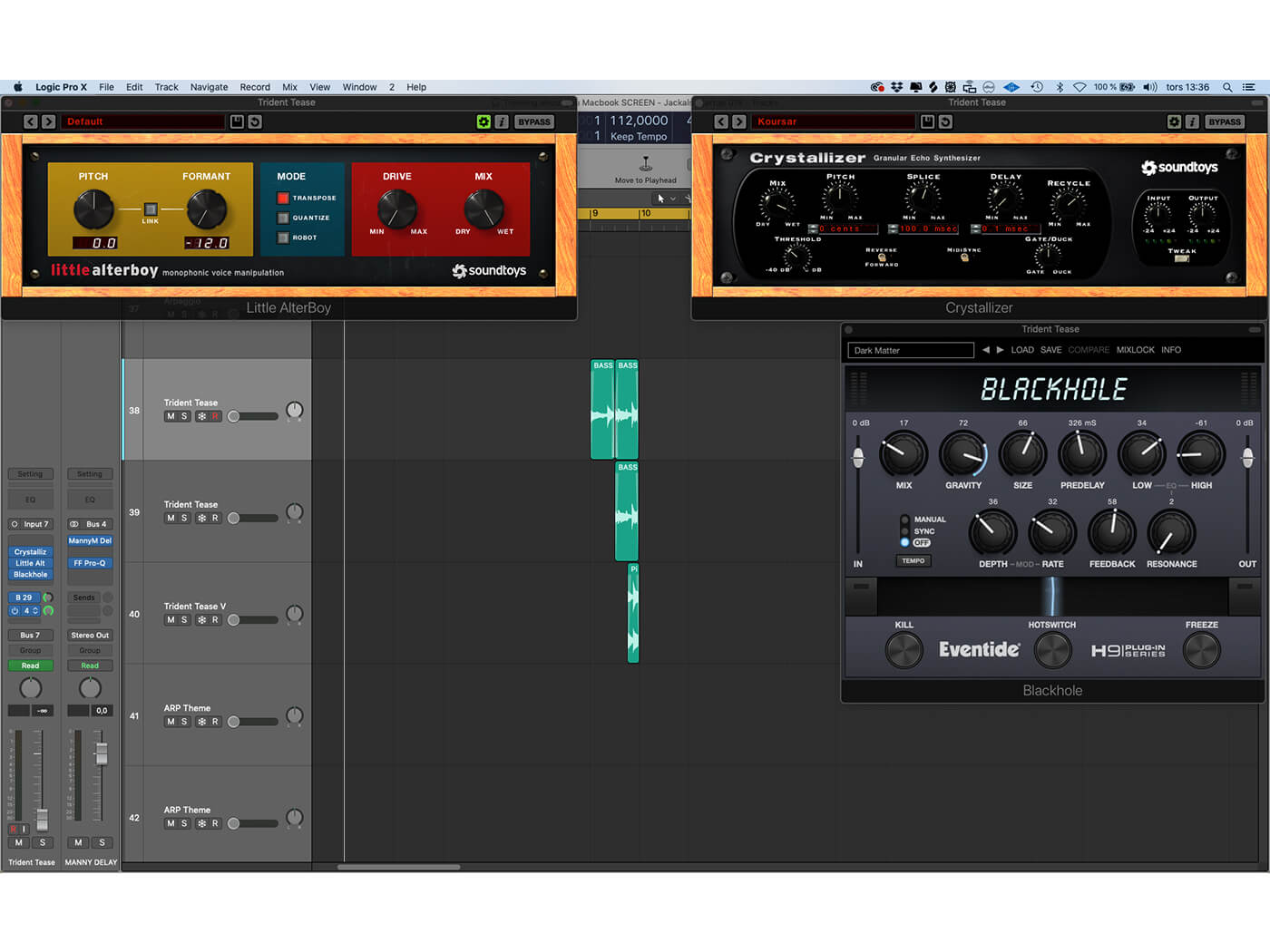 Tobias shares the process of mixing Alex’s vocals, which was all done remotely. Thankfully, the recordings had taken place before COVID-19 struck, so it was mostly a case of being surgical with EQ and applying some spatial elements. 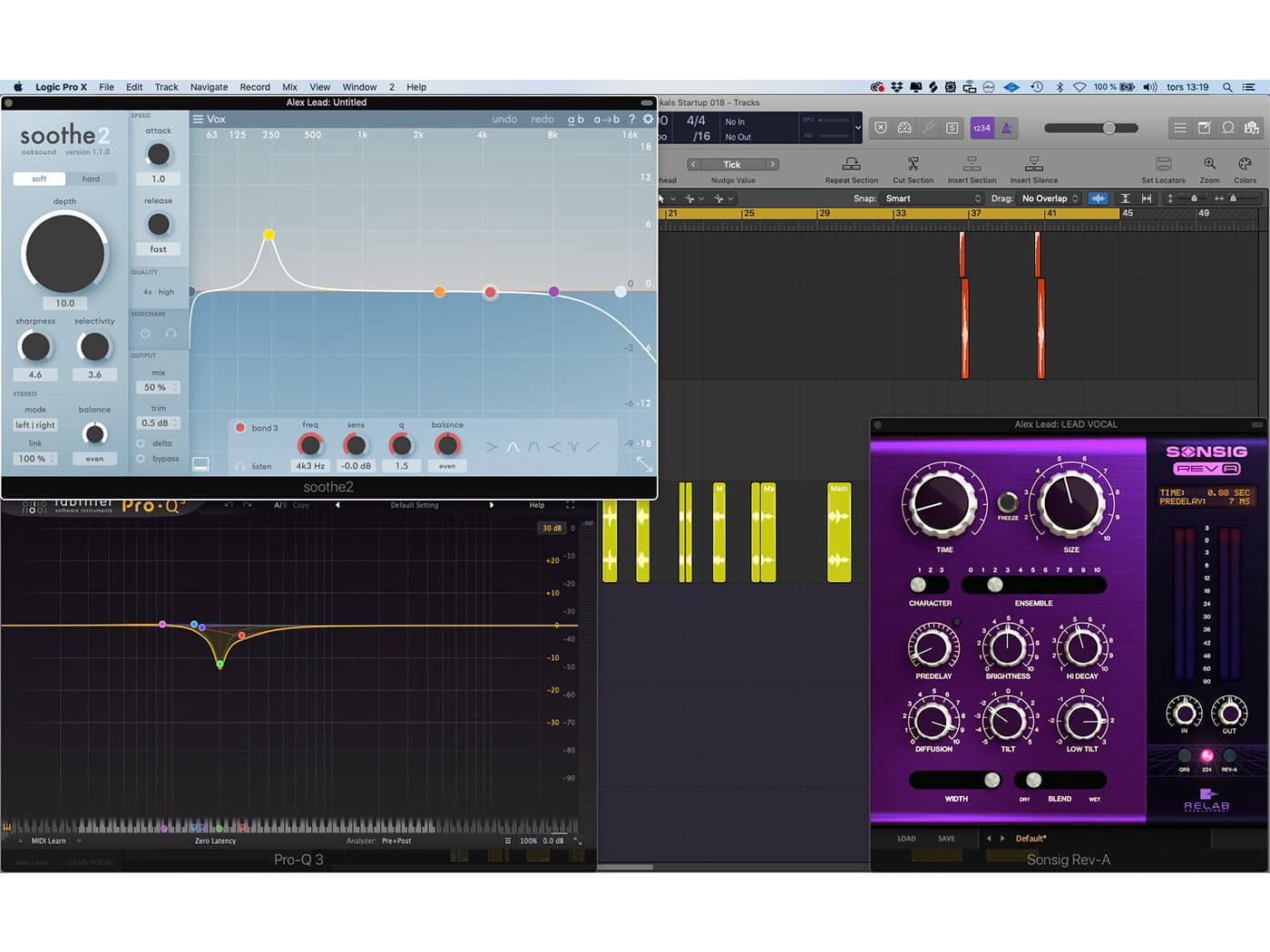 Main vocals: “The vocals were recorded some time ago and there were already some effects printed onto them”, Tobias tells us. “The feel of them was great, however, so we decided to not re-record them. They were recorded with one centre track, plus four layers stacked and hard-panned”.

Soothe 2 got a runaround again in the vocals, mainly to reduce low frequencies that might clash with other instruments. Relab’s Sonsig reverb was deployed with a medium-sized space and short decay. A bus send was also set up, which was home to a Bricasti London Plate reverb, adding a more spatial flavour. 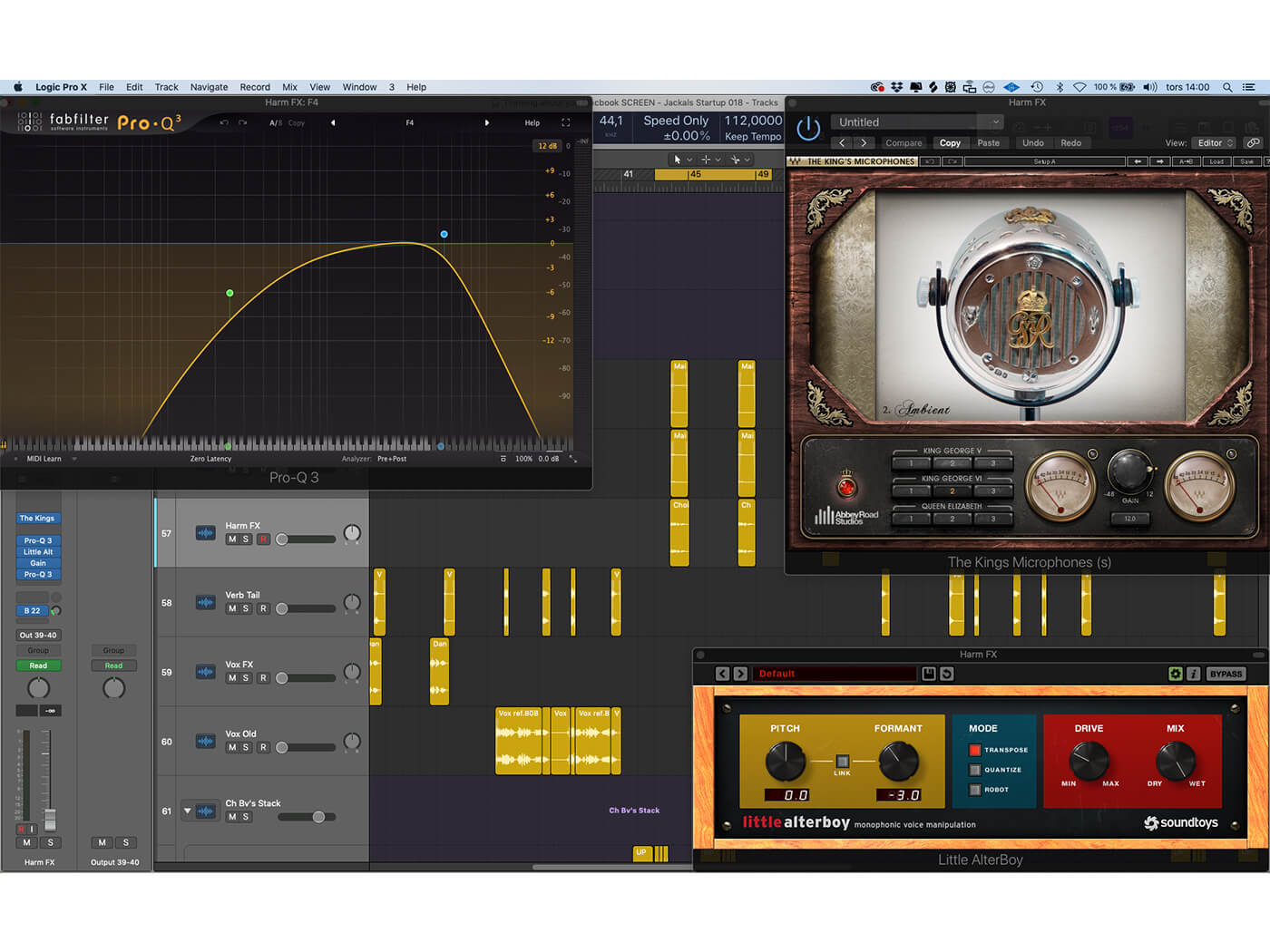 Leads Alterboy: Some of Alex’s lead vocal phrases were stacked up with Soundtoys Alterboy, giving warmth and flavour. “One of them was also reversed to create a new ad-lib to the track”, Tobias adds. Filtration was achieved with Fabfilter’s Q3 and Waves kings microphones plug-in, for a more vintage sounding vocal. This was then routed to a classic AMS RMX 16, a hardware reverb notably used by Peter Gabriel and Radiohead.

Drums: A hard-hitting kick drum is routed into a bus with a Fabfilter Pro-MB applying compression. Sailor & I don’t say much about the settings, but with a bit of knowledge and experimenting with presets you should be able to find a punchy patch in no time. Some light percussion accompanies the kick, which Alex says is to “make it feel faster than 112 bpm”.

“Like many of the instruments”, he continues, “this was also sent out to a pair of AwTac channel amplifiers and compressors working in parallel”. 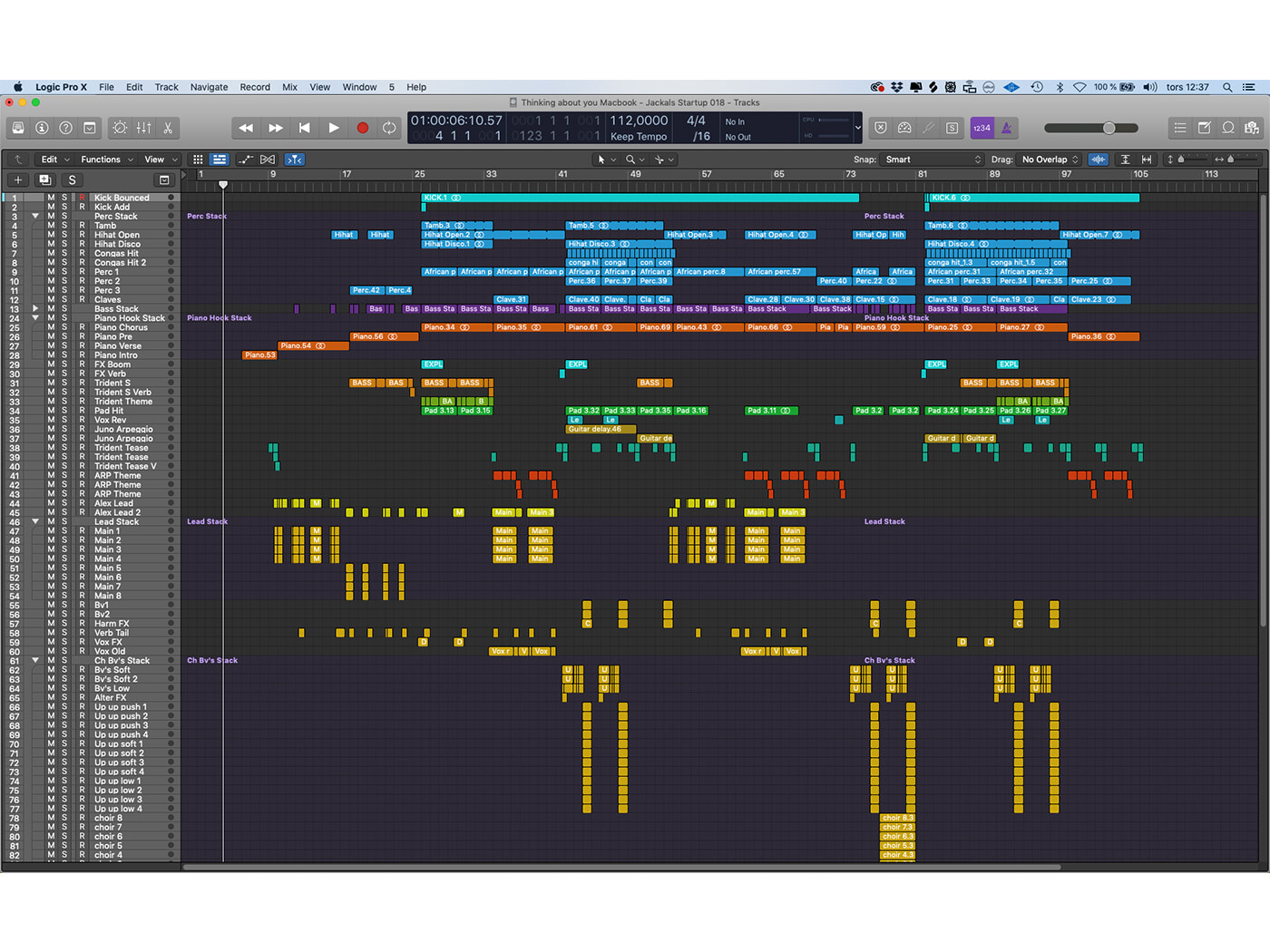 Mix/Summing: In the final phase of the mixdown, Alex and Tobias tell us that “all the tracks were sent out to the SSL Sigma summing mixer, a Neve 33609JD compressor and a Burl ADC converter”. Processing through analogue hardware is a sure way to  The audio was then routed back into Logic using some standard processing from UA Ampex, Bx V3, UA Manley Massive Passive, UA Inflator, FF L2.

A glance at the full arrangement shows that the Thinking Of You is driven by the drums, vocals, piano and bass. Melodic and spatial elements are sprinkled over the top, with plenty of layers to widen the stereo image and thicken the harmonic content of the instrumentation. With the right mixing techniques, Sailor & I manages to create a sense of warmth and give each part its own space in the track.

Sailor & I’s album, Diving For Lost Treasure will be available in January. Check out his latest single Clues here.

For more interviews with artists, producers and engineers click here.