Ahead of the release of their first record, we catch up with Subjective (aka Goldie and James Davidson’s new project) to discuss the upcoming album… 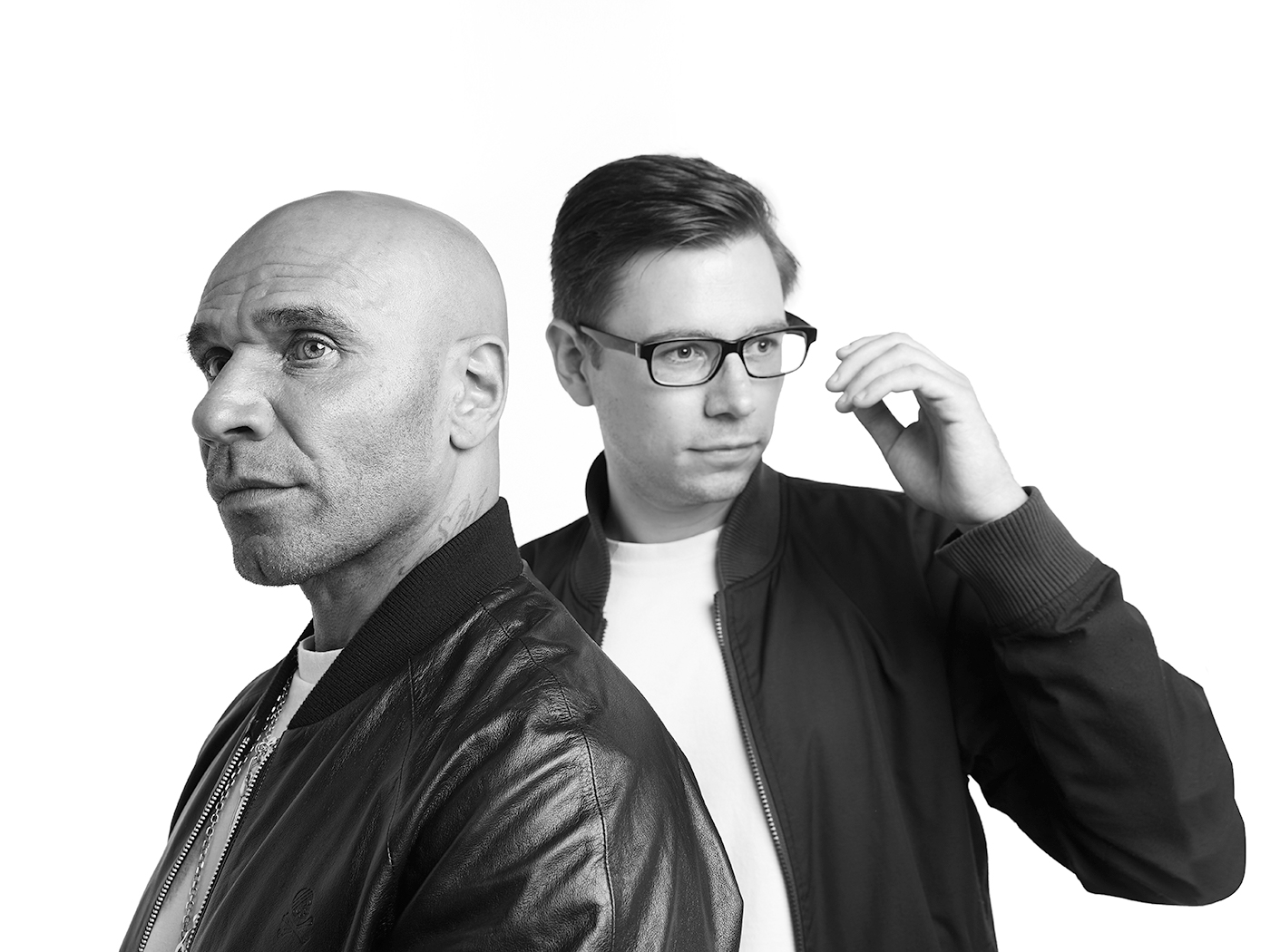 He’s one of the most iconic figures in dance music – now legendary DJ, producer and artist Goldie has teamed up with engineer and producer James Davidson (aka half of Ulterior Motive) to form Subjective. Ahead of the release of their first record, we catch up with them to discuss the project…

From his 1995 classic record Timeless, Goldie has achieved considerable success in all manner of fields, including electronic music, DJing and also in the business side of the music industry, co-founding the successful Metalheadz label.

This, combined with an acting career (he’s appeared in several movies, including The World Is Not Enough and Snatch) and being a regular television personality, has established Goldie as something of a household name in the UK. Despite his varied pursuits, he’s maintained a progressive, pioneering stance when it comes to music-making for over two decades.

James Davidson, on the other hand, has been very much a behind-the-scenes figure in the music world until now. The Bournemouth-based producer has been one half of the acclaimed drum ’n’ bass production duo Ulterior Motive alongside Greg Hepworth. The pair produced Goldie’s 2017 record The Journey Man, working in Goldie’s Thailand-based studio.

This experience led Goldie and James to unite as a bona-fide creative duo, with their first release, titled Act One: Music For Inanimate Objects, set for release in January in 2019. We ask the two about what sparked this union…

“Well, we first properly met at Sun And Bass festival in Sardinia around 2012,” James tells us. “We started talking about mine and Greg Hepworth’s tracks that we were writing as Ulterior Motive, we sent some music over and eventually signed to Metalheadz. This then started the friendship and collaborating on I Adore You in 2017. But we got really close during the recording and engineering of Goldie’s The Journey Man album – the whole time in Thailand, where he lives, was full of jokes, so we knew working together was working well. It was during the making of that album that we explored a lot of non-d’n’b concepts, that led to me showing Goldie some non-d’n’b sketches I was working on. He loved a lot of the ideas and suggested we work on a brand-new project – that became Subjective!”

So, if not d’n’b, then, what genres and textures have the two explored with this first record? James reveals: “We wanted to explore songwriting not linked to any particular genre. If we play a riff, or some chords, or we find a killer sample, we don’t have to force it into 172bpm or transpose it into a key that will work on the dancefloor. The whole idea is to base the song around the soul of the track – that can easily be lost if you are tied to one genre or bpm.”

Goldie tells us: “Subjective is really my first true collaboration where I have written equally with anyone else, so the process was very different in that respect. Musically, working at a slower tempo we just had fun. D’n’b as a music artform is very complex, so simplifying the process and working at 110bpm was so much fun and a lot less intense.”

So why the name Subjective? “The name Subjective partly comes from the viewpoint of the listener, it’s really interesting how to one person a track can be perceived as ‘hard’ – maybe because of the drums, while others pick up on the melody and describe it as beautiful – the whole standpoint is subjective,” James tells us.

We ask James how a typical track (if there really is a ‘typical’ track for Subjective) will come into being – does James bring the lion’s share of ideas to Goldie, or do the two work out new ideas together? “We don’t have any set rules to how a track will start – we’re usually together in Goldie’s Thailand studio, and we do three-to-four weeks in there, getting all the initial ideas down that can be worked on and mixed in the UK.

“Occasionally, we’ll work separately. Either one of us will have an idea and we’ll work it out with me sending small clips of audio to him or Goldie sending me voice memos – singing a synth or cello line, or even lyrics and a melody. I’ll then notate what he’s sent and turn that into an instrument to try in the track.”

Goldie’s creative process is an ongoing thing, it seems, with fresh ideas appearing in his mind almost daily. “I’ll get new ideas every day… I’m recording sounds in the jungle in Thailand where I live, to the sounds of the London Underground. Wherever I am – I’m thinking, writing, creating… it never ever stops.” Goldie reveals. “The actual root of a track can start from a random sample, an emotion we want to capture or just jamming to see how we feel on the day – the multi-genre platform is very liberating and inspiration comes easy working from Thailand!” James adds.

Act One: Music For Inanimate Objects has been trailed by the fascinating single Inkolelo, which features samples provided by Beating Heart Project and, as the duo explain, fuses genres effortlessly. We ask James if there has been any new gear specifically brought in for the project, and what tech is at the heart of what the pair are doing?

“Well, we’re mainly in-the-box using Logic. Hardware is used, but these will be dedicated hardware sessions where we create sounds from the gear to sample later. I’ve got a modular [Eurorack] setup that I’ve largely built myself from open-source designs, so that features heavily. Once we have them in-the-box, though, we cut out the good bits and go from there. We also love the TR-8 crunched through my old Mackie 1604. I’m currently working on all this through a 2013 Mac Pro – the last of the big silver ones, with four cores of UAD.”

But what tech encouraged the song-generation ideas the most? “Well, inspiration-wise, the modular setup is great for basslines, crazy effects, beautiful evolving pads and drones, especially when paired with the Eventide Space pedal! For the musical side of things, the Isla Instruments Kordbot has really been amazing for someone like me, who can hardly play.”

James continues: “From a production standpoint, we usually start with a melody. If there’s an idea we’re going for, if we’re jamming, we’ll nail the drums first. Plug-in-wise, we’re both big fans of the Native Instruments stuff – Reaktor, random user ensembles we’ve downloaded and Kontakt libraries are used a lot – iZotope Alloy 2, Neutron, Iris 2 all get used lots, too. For our drums, we’re using Addictive Drums 2, layered with random samples.”

James continues to explain the Subjective recording process, and reveals that the mix stage can pose the largest hurdle. “I guess the mix poses the biggest challenge – achieving a coherent mix over the whole album, with so many styles, took a fair bit of work, but as long as the song has real feeling and emotion, you know you’re on the right path. Mix-wise, my RME Fireface interface and Neumann KH 310 A monitors were invaluable.”

James tells us that there are similarities with Subjective and a lot of his previous work. “The obvious distinction with this record compared to my previous projects are the more musical elements,” James says. “My Ulterior Motive stuff with Greg is a lot more dancefloor focused and although there are occasional musical moments, it’s nothing like the level of music on Act One: Music For Inanimate Objects.

“Working with Goldie on The Journey Man album in 2017 really opened my mind to working with musicians and songwriting, so that was a big part in the birth of Subjective.”

Goldie narrows his favourite tracks on the record down to: “Silent Running, that’s a pretty special one for me, and anything with my musical muse Natalie Duncan on it, so the track Landscape – Portrait, too. But it’s a really great project and I love them all, in truth.”

The show must go on

With the album bearing the teasing prefix Act One, we can surely expect more from the pair over the next few years, or perhaps even sooner?

“Yes, we’re pretty far down the Act Two road already, and it’s pretty exciting. We are playing a few DJ sets at the minute, but definitely hope to do a full Subjective live show soon, too – watch this space!” James reveals, before explaining his positive perspective of the music industry right now.

“Electronic music live is pretty amazing at the moment,” James says. “I’ve played and seen some amazing shows recently, which is really nice after a few years of wondering which way it’s heading. The whole industry, sales-wise, is changing so fast though, when I started releasing music in 2009 it was all about vinyl and CDs – now CDs are all but gone. Vinyl looked that way, too, but is now back on the up. Now, with all the streaming services available, it’s impossible to guess what’s going to happen next.”

And finally, we ask the duo one of our timeless questions: what advice would they give to anyone hoping to work on music as a full-time creative career as they do? “Practice! Nothing comes easy and there are no – well, hardly any – shortcuts to success. You get good because you love producing and spend hours doing it. If you’re not enjoying it, maybe it’s not for you.”

James concludes: “I also feel that the production and engineering roles are getting blurred these days. So spend time on the songwriting and arrangement, not just making the track as loud as possible or the snare as big as possible, etc… the song itself is the most important thing, so spend some time asking what the song needs emotionally, not just how it can be sonically better.”

Subjective’s first album Act One: Music For Inanimate Objects will be released 18 January, 2019.