The Wolf Den is home to Zayde’s motivational music, which finds its way into soundtracks, trailers, video games and sports commercials. 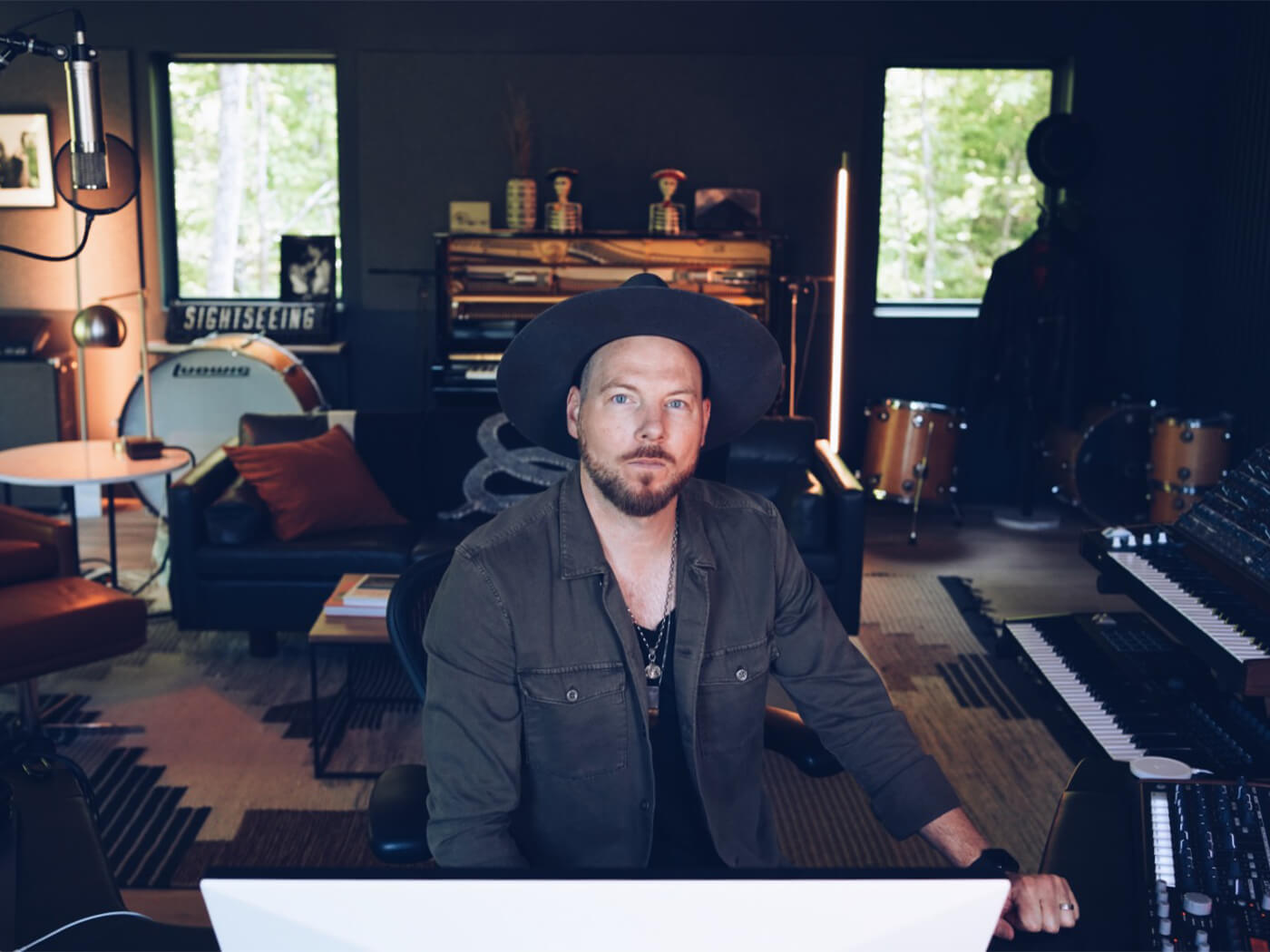 Recently, he’s been sinking his teeth into his fourth album, Neon Blood Type, featuring the powerful Holy Water. He’s also got a new custom-made studio. He leads us into the Wolf Den to show us his inspiring space, his gorgeous guitars and gear, and explains how his favourite guitar sound came by complete accident. 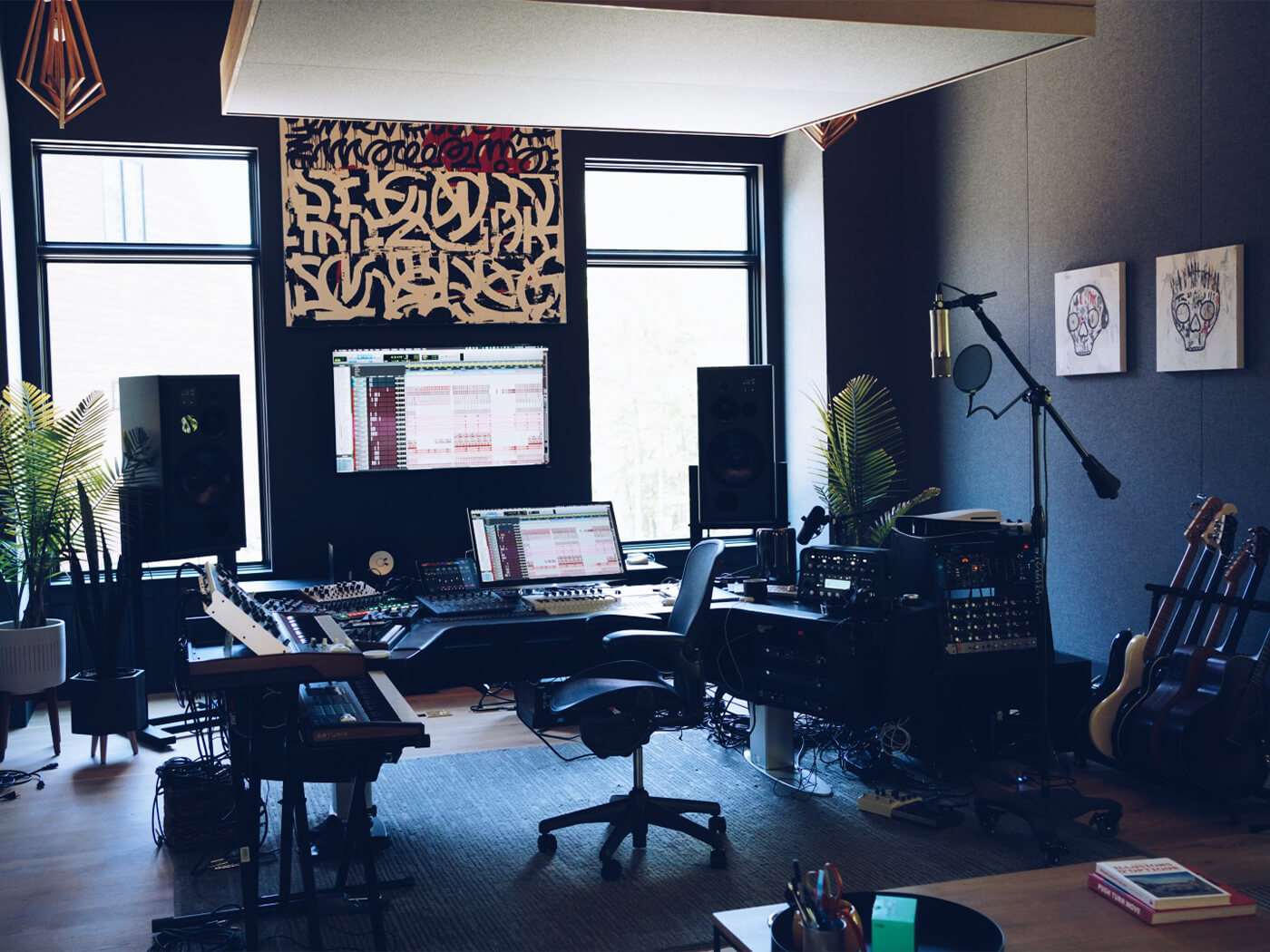 Tell us a bit about the studio, Zayde.

I recently built this studio, just south of Nashville. My wife and I purchased five acres and, over the course of the last three years, we built a new house and studio here. So I’ve been in this new spot for roughly a year now. We call it the Wolf Den.

The Wolf Den is my own personal workspace. It’s a room I designed with my architect, with sound treatment by Gary Hedden. It feels like a cross between a treehouse and a big living room with music gear everywhere. I don’t rent out my space to anyone, but sometimes I let my friends come over and take it over for a while. 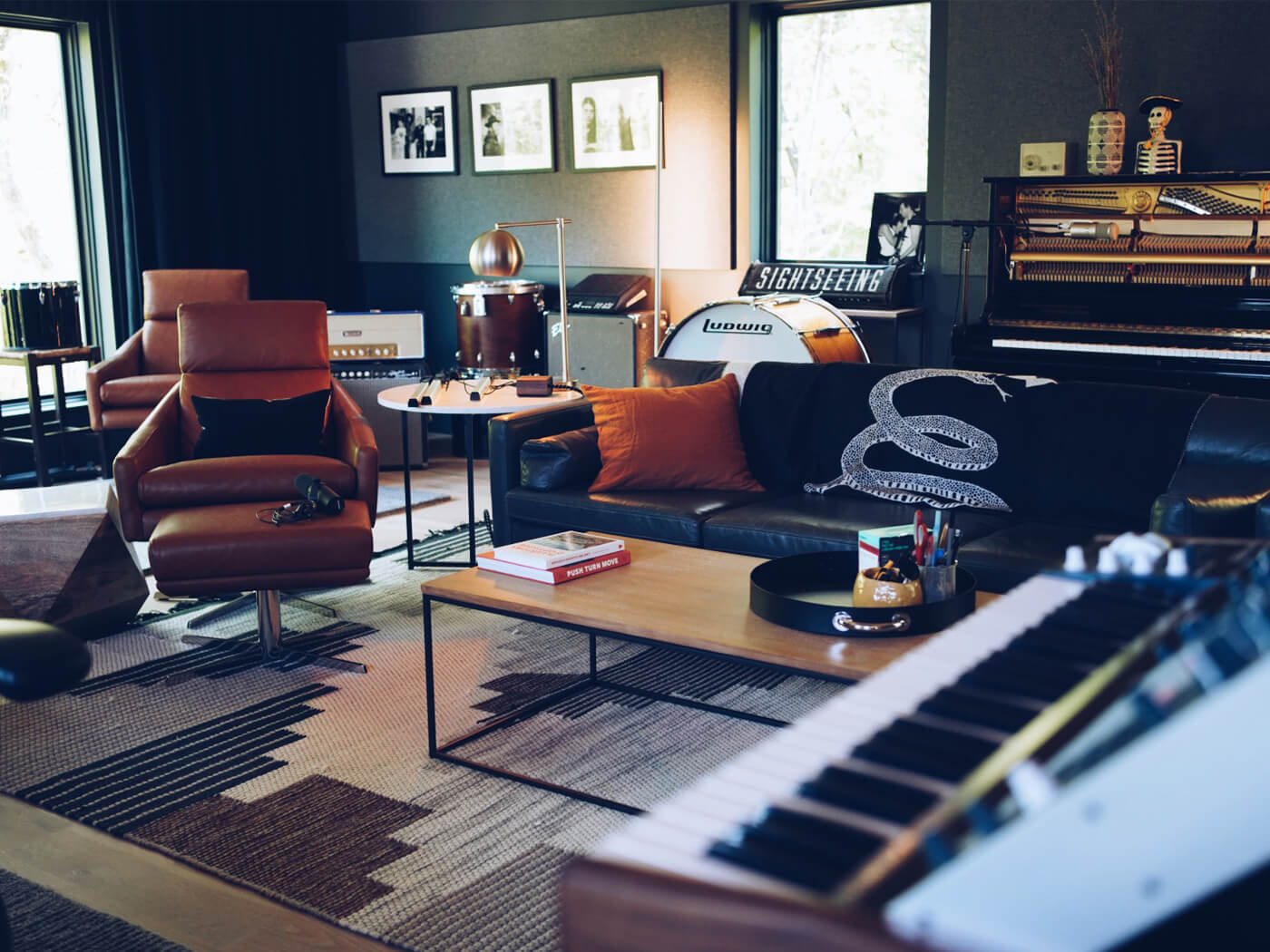 I use Pro Tools primarily. I’ve been using it since I was just starting out, and I just feel like it is a creative extension of myself now. I know it so well that I don’t have to think about what I’m doing. Pro Tools is an instrument for me. It is just as important as a guitar or drums at this point.

This is extremely difficult because I have several instruments that are very dear to me and that I’ve had for so long. This includes the Duesenberg Fullerton Tv Guitar – it makes me feel like I can really play guitar; the Arturia MatrixBrute for super thick bass synth and lead; ATC SCM100ASL Speakers – they make my ears feel like superman; Lawson 47 clone microphone; a 1997 Taylor Guitar that I got when I was 17; and a 1977 Yamaha C3 Piano.

What atmosphere do you create in the studio, and how does it help you with your creativity?

I want my space to feel like an open, casual room with the option to move around and be creative. I’ve always felt like an informal studio allowed for more freedom of expression and ideas.

What synth, instrument or effect can be heard the most on your new release, Holy Water?

As the song opens up, there’s a wacked-out guitar that sounds like a sample. That whole part happened by accident. I was trying to find the right instrument for the beginning of the song, and I had played several things on guitar and piano. I listened through the options and found an acoustic guitar part that I thought might work, but it felt a little out of tune.

To try to clean it up, I ran it through autotune. But the Autotune was set to the wrong key, so it pulled one of the notes around it and made it bend. So I dropped a few more plug-ins on the guitar part to trick it out, and then it started to feel like a sampled guitar part – and I fell in love with it.

A lot of your music has ended up in video games, movies, TV shows and more. Do you always keep this in mind when producing new tracks?

I’ve always loved alternative rock, hip-hop, and epic movie soundtracks/trailer music. So when I was starting as Zayde Wølf, I wanted to try to combine all of those elements. As it turns out, that combination of wild stuff seemed to work for all of those opportunities. I just love making that sort of music – epic, overcoming, fierce.

Can you tell us more about your guitars? What tools do you have for processing them?

The guitar was my first instrument, but I never became an amazing player. I’ve always been drawn to using an instrument to create songs and not be the guy who could just shred all up and down the neck. I’ve got a few cool amps and a few cheap ones too, but most of the time, for Zayde Wølf stuff, I’m running the guitar direct into a preamp, clipping it, and then adding fuzz or rat-type distortion in the box after. Again, it’s mostly just doing stuff on a feeling for a song, and not really if it’s ‘right’ or not.

What’s been the most significant investment in your studio? Was it worth it?

The most I spent on a single item was on my ATC speakers with the BagEnd sub system. The whole thing was a small fortune, but it was 100 per cent worth it to me. Having a room and a speaker setup that tells me the absolute truth all the time is so special.

I hired the wizard Gary Hedden. Gary did the acoustic design for me, and his son implemented the treatment. It was a dream to be able to do this with Gary.

It might be a few new synths, but I just purchased some stuff to set up a small workspace for my kids. So that’s been on the shopping list at the moment!

My dream would be to own an SSL4000 console. I think it’s mainly about the romance of the era and the tangible physicality of the desk.

I worked in my previous make-shift studio room for nearly 10 years, and the whole time I dreamed about what I would do if I could build a new space. So I took my time building this space, and I love all parts of it. 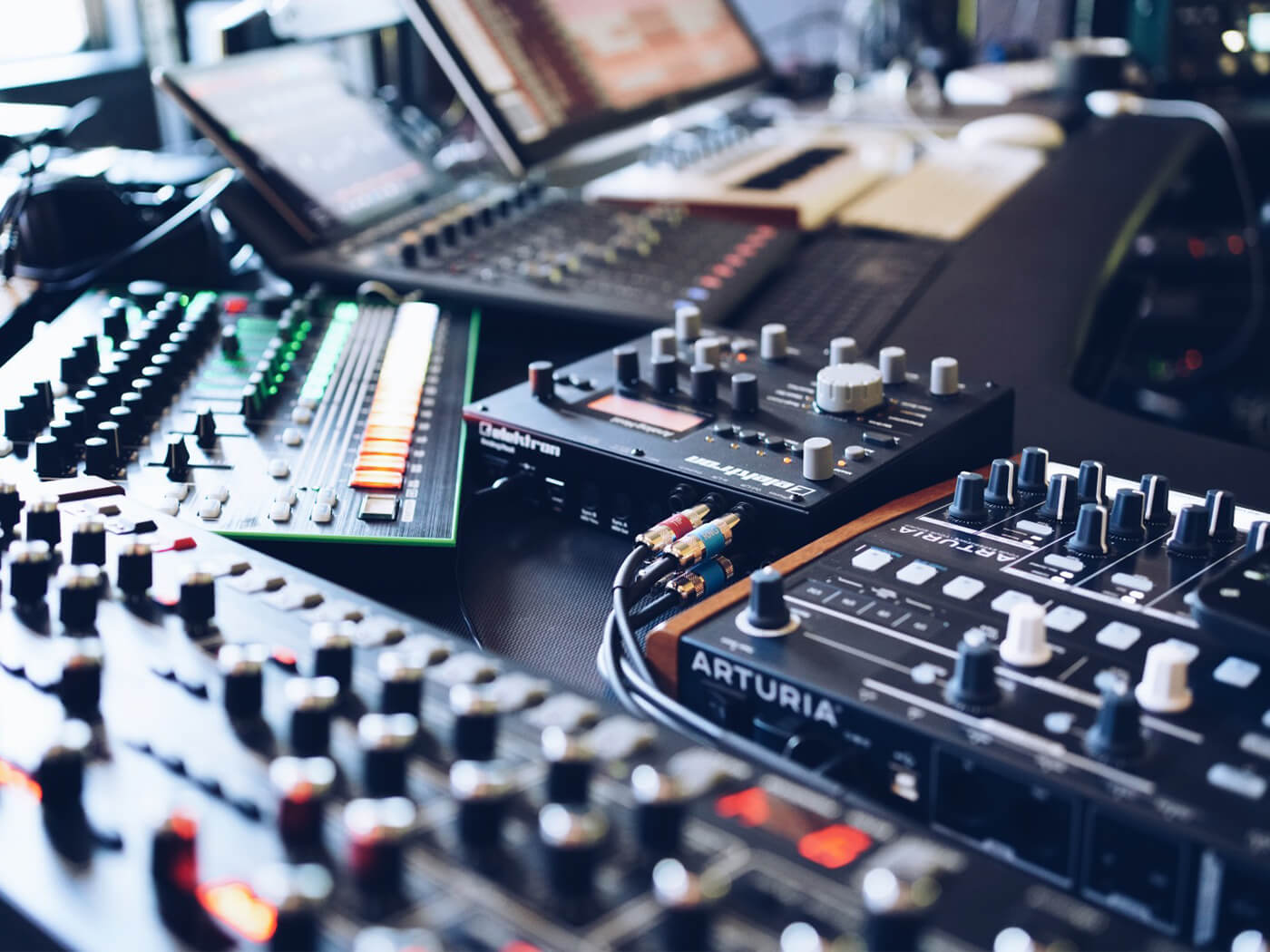 Do you love it? Keep going until you do.

Can you envision a closer relationship between video games and music in the near future?

I’m constantly thinking about this. I would love to work with a game publisher and create a soundtrack for the game. I have some ideas that I feel could take some games in a different direction, sonically, that could be an incredible experience for the player. 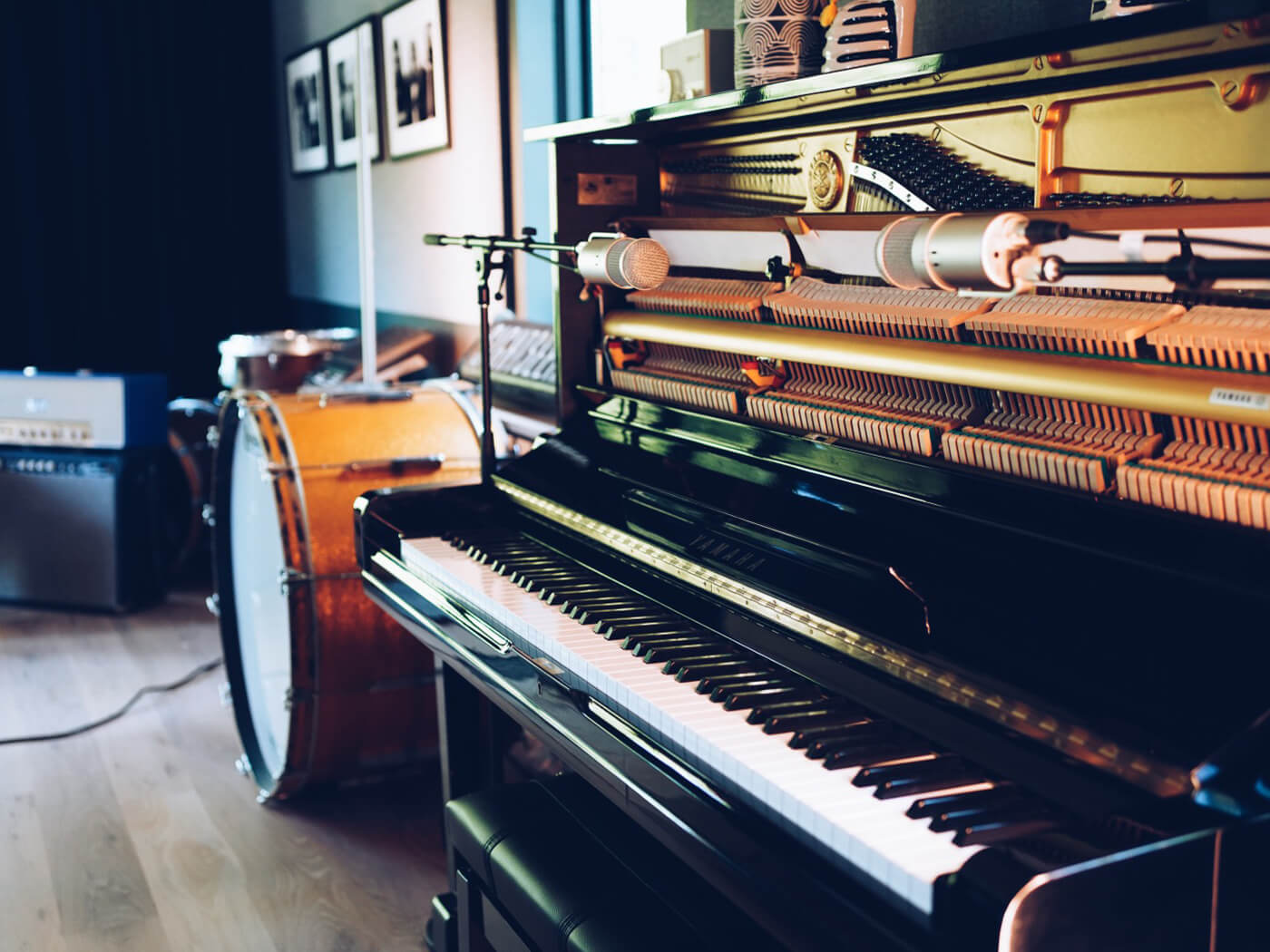 Start small. Learn your gear and your room before feeling like you need to buy a bunch of crap you might not need yet. Do more with less. I worked on an old Digi003 rack for nearly 12 years. I made some of my best early songs on that thing and milked it for everything it had…up until the point where I was forced to upgrade to a new system.