Show Off Your Studio: Throwing Snow’s Somerset barn is packed with esoteric instruments

Learn why his favourite piece of gear is an iPad app and why he’s gravitated toward a traditional Indian instrument. 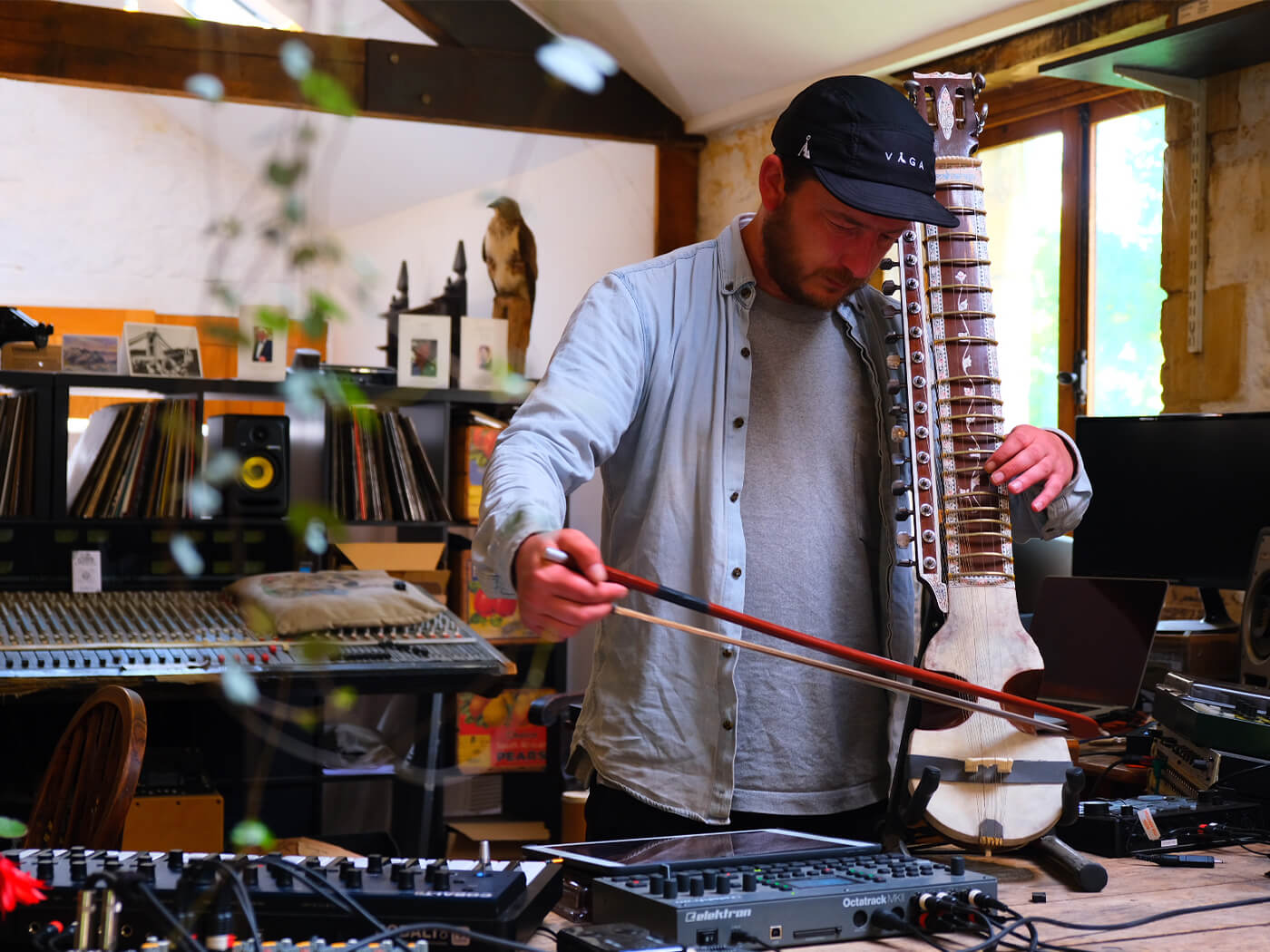 Ross Tones, AKA Throwing Snow, may be a UK-based producer, but his influences originate from a plethora of different styles and cultures. His forward-thinking dance music has landed him in studios alongside production giants Flying Lotus, Bonobo, and Four Tet, with praise from Zane Lowe, The Guardian and more. He’s also set up his own label, Snowfall, and co-owns Left Blank and A Future Without record labels, launching the careers of upcoming artists.

Tones is gearing up to release his fourth studio album, Dragons, on Houndstooth on 25 June. The album is a blend of electronic and acoustic sounds, with a diverse range of inspirations, from texts such as Steven Mithin’s The Singing Neanderthals and the 1982 animated film Flight of Dragons. “I’m into putting music back into history” Tones explains. “I want to make you think about what music is, what its purpose has been.

He invites us into his Somerset studio to show us the gear that was imperative in its creation, and why an iPad app would be his desert island gear pick.

Tell us a bit about the studio, Throwing Snow.

I’m in the countryside near Bath in an old building originally used as a stable for a stately home. I’ve been here for about four years, and the concept was to have a creative environment for my own music and for collaboration and scoring to picture. I’ve prioritised atmosphere, character and environment over perfect acoustics. 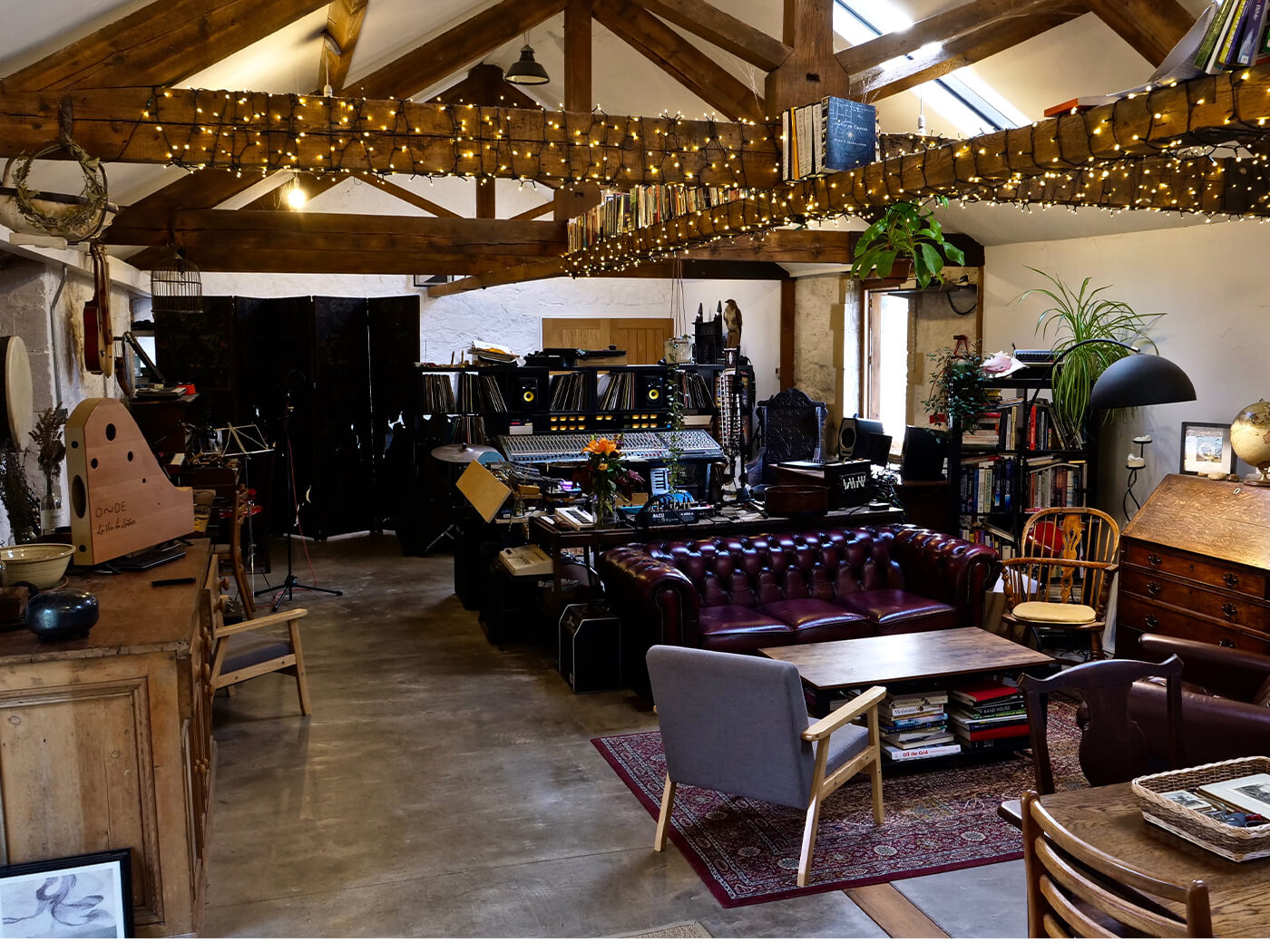 I do nearly all my work here, apart from the occasional session when I need to work with a larger number of people for a string section, for instance. Luckily, Real World Studios is not far from here, which has been convenient, and a good friend, Josh Clarke of Get Real Audio, has just set up an excellent studio nearby, too.

If I’m collaborating or producing an artist, it’s almost always done here or more recently via Zoom and AudioMovers. Hannah Cartwright and I also recently scored Breaking Boundaries, a Sir David Attenborough narrated documentary on Climate Change, so the studio is used for almost everything I do.

I’m a big Ableton fan because I know it so well, enabling me to work quickly. There are definitely drawbacks for composing to picture, owing to how it deals with timecodes, but I’ve found the benefits outweigh these.

Can you tell us a little bit about your analogue desk?

The desk is an Allen and Heath Sabre, and I have a real soft spot for it. I acquired it through a friend of a friend, who’d looked after it well, thankfully. I needed it to be at the centre for a previous album project with Snow Ghosts in another studio in London. Then, when I was looking to move to the South West, I had to find a place big enough for it, so it kind of forced me to choose this place. I use it as a central hub when improvising and writing with other people but also to sum a mix. My workflow is always evolving, but there’s always been a place for this desk, warts and all. 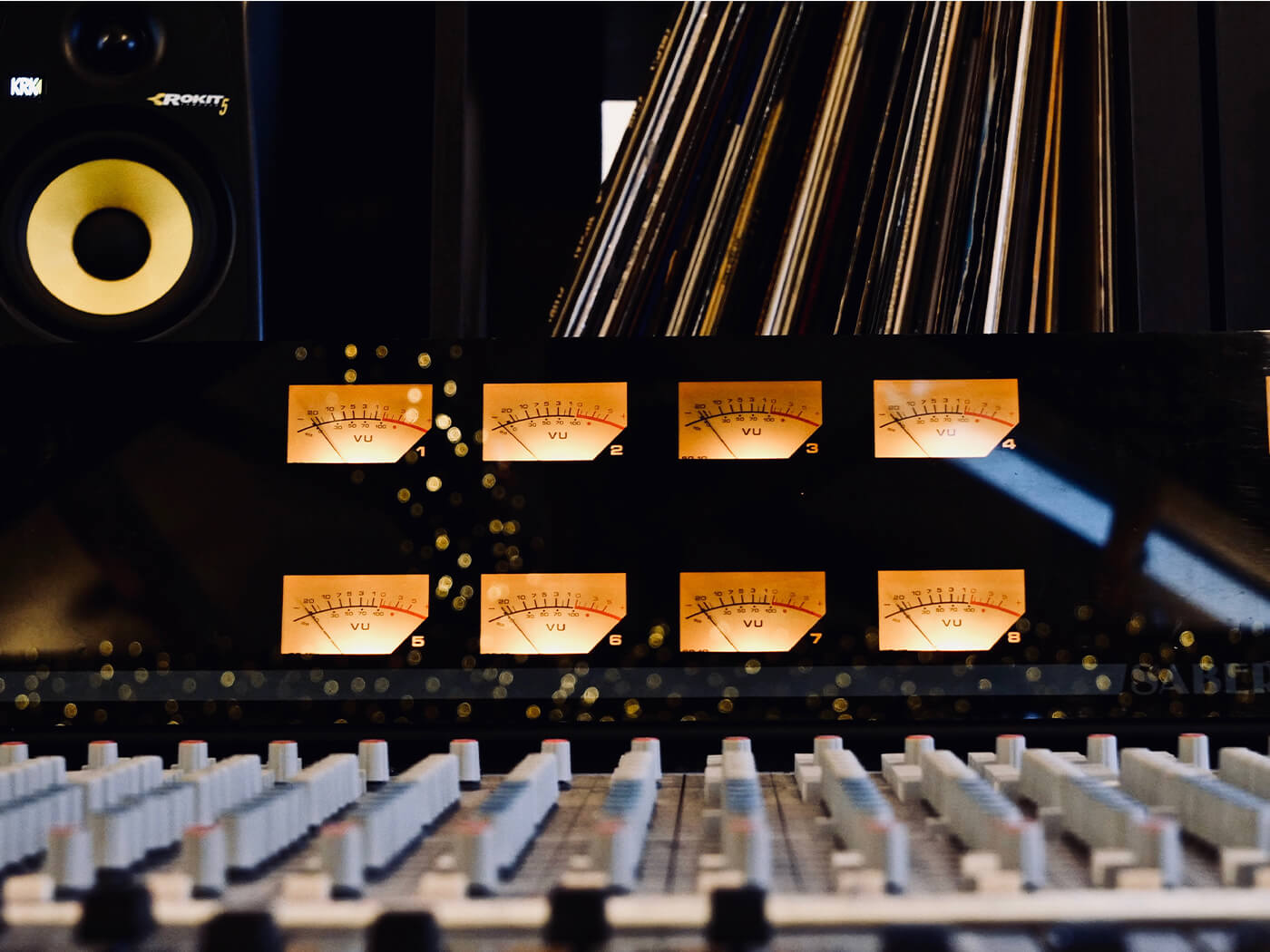 You have some rather quirky bits of gear here and there. What are some of your favourites?

I collect instruments myself but also have become a depository for other peoples’ broken ones. I often like playing instruments incorrectly or trying to get sounds out of broken instruments. I just find it inspiring to find unusual sounds. For example, I’ve spent the last three years messing around with an Indian instrument called an Esraj. Its got sympathetic strings that creates a lovely tuned reverb effect. I’ve also got into playing the Irish Bodhrán and bones, which has led me down a rabbit hole of percussion.

Undoubtedly, my favoured bit of gear is an iPad equipped with the SAMPLR app. I find it so easy to sample anything around me and turn it into music. The interface is a stroke of genius from Marcos Alonso; he’s created a classic. 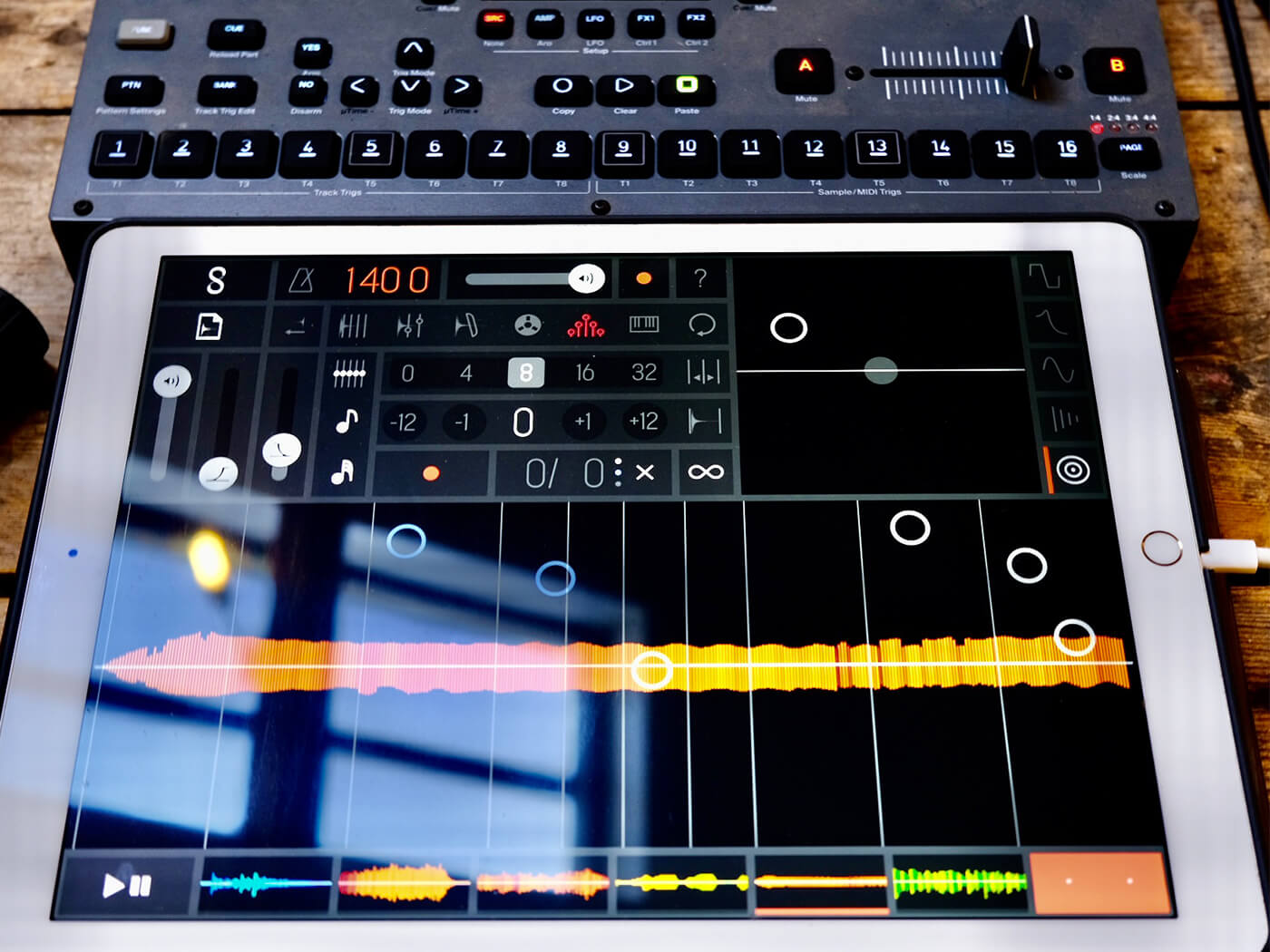 What synth or effect can be heard the most on Traveller?

The main riff on Traveller was taken from a piano recording on an upright I have here. From there, I manipulated it in SAMPLR – my first port of call when trying to come up with an idea.

Atmosphere is massively important for me. I’ve definitely benefited from being in the countryside next to a forest. The same goes for inside, being surrounded by plants and books. The instruments are spread out, so I’m not bound to one chair or position. Sometimes the best stuff comes out when I’m not intending to write music but just because I pick something up. The studio has to feel like home for me to write anything good. My dog’s always around, which gives me some much-needed motivation to stop work and get outside, and he accidentally appears on quite a few recordings.

A lot of your music is club-ready and almost purpose-built for warehouses. How do you gauge its impact in your studio?

My Throwing Snow stuff is built more for the dancefloor and, because I’ve worked in many environments, I’ve had to come up with ways of dealing with it, especially in the low mids and bass. I’m never in the perfect mixing environment, but using Sonarworks means I can iron out major things in the room, and I also use headphones and different monitors. I often rely on knowing the instrument and how it’s worked in the past when it comes to sub-bass. I always work with Matt Colton at Metropolis and trust his ears. If there is a problem in the mastering stage, I’ll be made aware of it and sort it out.

Rent! It’s been worth it for this place for now, but new places bring new inspiration, so who knows. I tend to be conservative when it comes to expensive bits of equipment. One example is my live rig. I wanted to find a hardware-based way of playing live and have tried a myriad of setups. I’d resisted the Elektron Octatrack for a long time, but eventually, I took the plunge and it was worth it. It’s a blank canvas but one that has some creative restrictions. That said, if a standalone version of Ableton Push came out, I’d be all over it – as long as it had enough RAM.

If you were left on a desert island, what one item would you take to make music with forever?

That’s tough. As I said earlier, it would probably be SAMPLR because there are endless sampling possibilities. However, I have developed a real love for the esraj, so I think it would have to be my desert island choice. 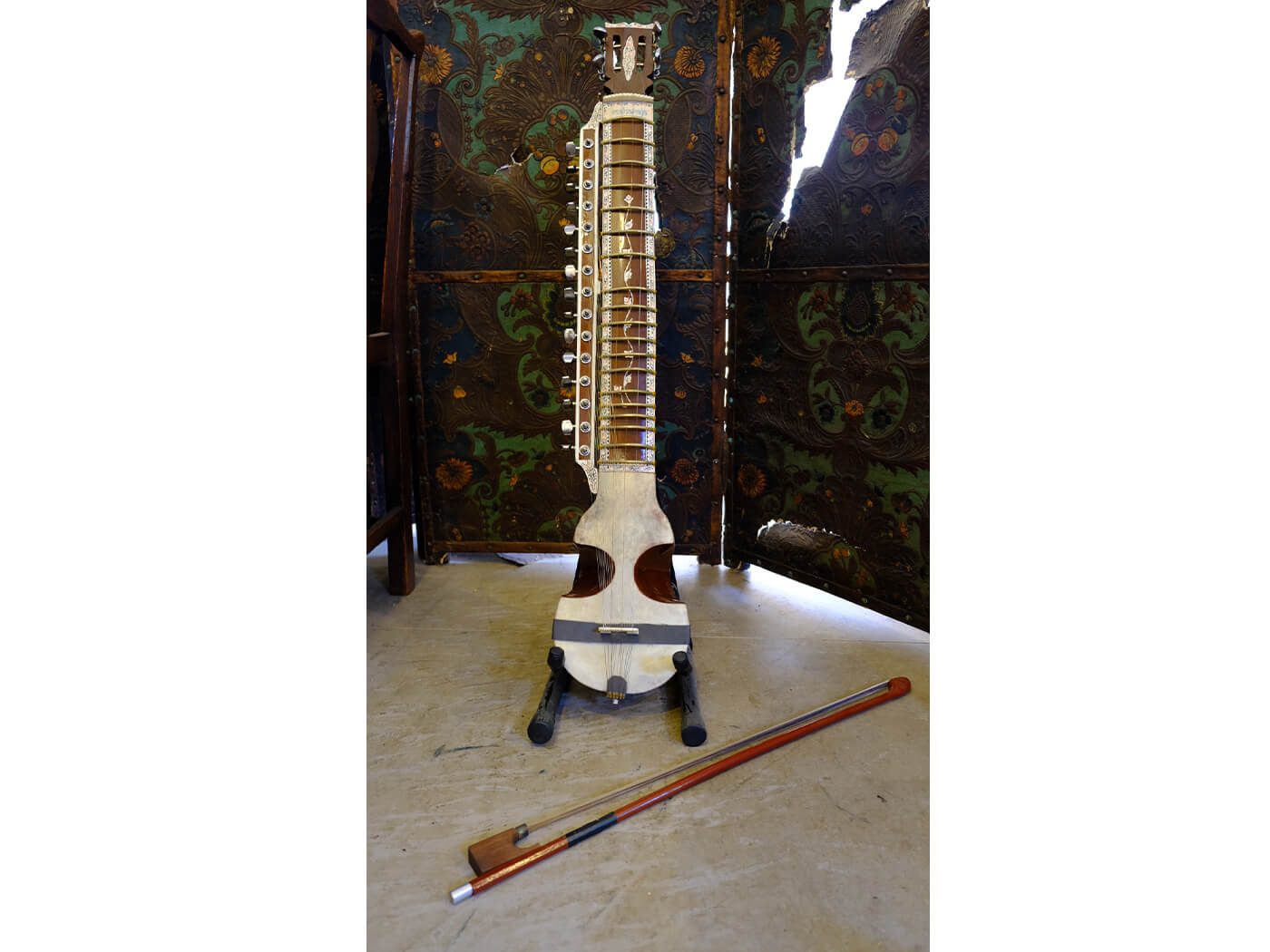 It’s a large, long room, so my tactic was always to fill it with books, vinyl and furnishings. I deaden the space because I use different parts of the room for different recordings. Again, Sonarworks comes in here. It’s not perfect, but it helps. I also use Fluid Audio FPX7 coaxial monitors. Once the listening position is sorted, they are amazingly accurate.

I’m happy with my setup at the moment, and I’m waiting on an Expressive E Osmose to turn up. It’s based on the EaganMatrix physical modelling engine in the Continuum, but with a different MPE keybed, so I’m looking forward to that.

Probably an Oberheim 8 Voice. I love that synth, but I’d probably never feel the price was worth it. The same goes with a beautiful Neve or SSL desk.

Pick a scene in a film you like, mute the audio, and try to mirror the picture with music or change the emotion entirely. It may open new ideas you can return to in your music.

Think about how you can optimise your workflow above everything else so you can concentrate on making music.