Following his new album, BLISSS, the melodic techno producer talks about building his burgeoning studio, the making of the LP and how he adopts an ’empirical process’. 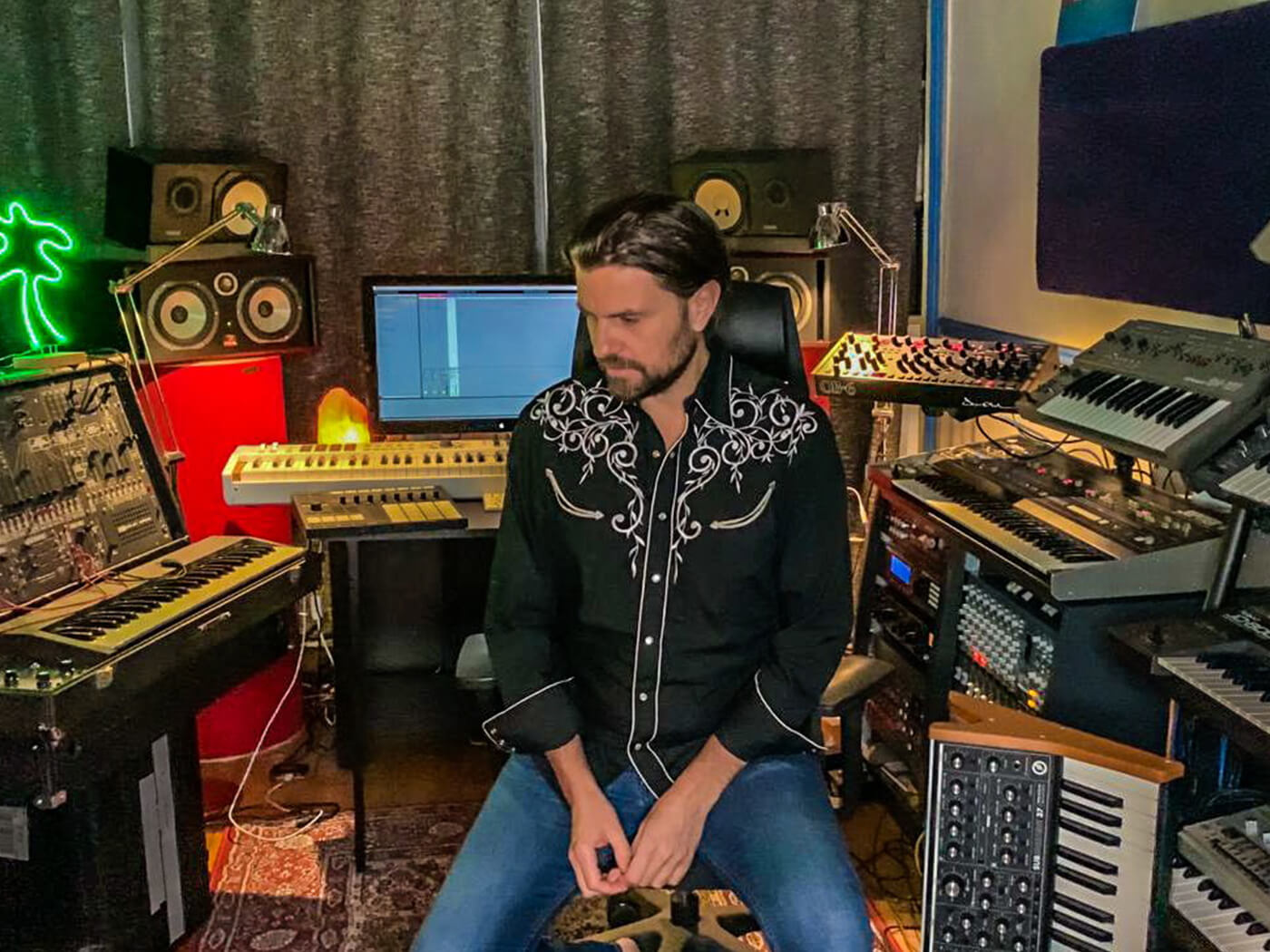 Rodriguez Jr. in his Parisian studio

Off the back of his third album, BLISSS, formidable techno producer Rodriguez Jr. should have been taking his melodic electronic sound to the clubs of Ibiza and Berlin. But, like the rest of us, he’s staying indoors.

That’s no great hardship, though, as we discover. Rodriguez Jr.’s cavernous studio is stacked with modular racks and vintage synths, with a legendary analogue instrument at its centre.

In this interview, lightly edited for clarity, the highly-respected producer shows us around his breathtaking Parisian cavern and explains how he applies his experimental live techniques in the studio. 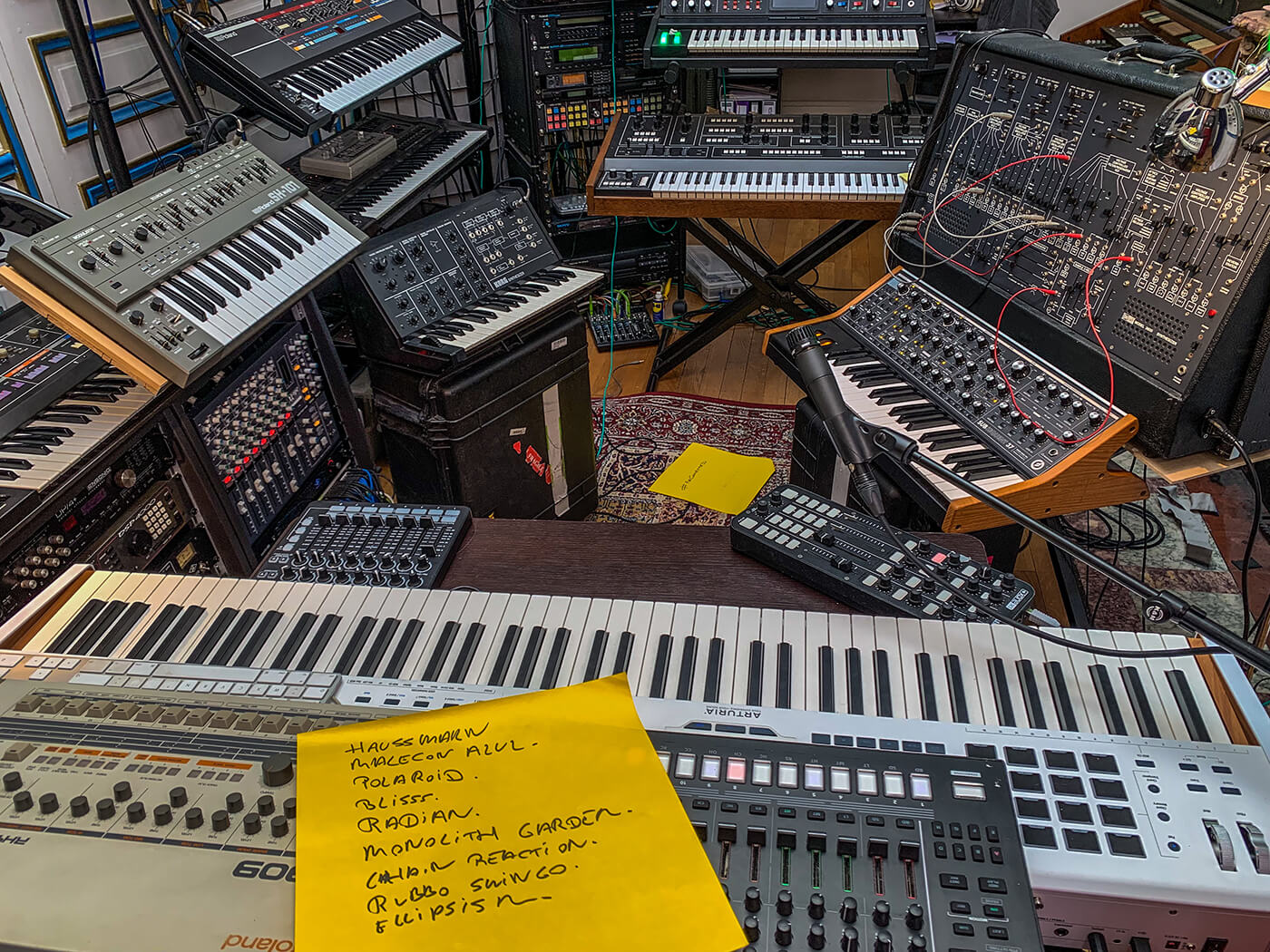 How do you use the studio?

How I use the studio has changed as my equipment evolves as well as my experience with production. I use my studio very much as one would use a painting studio. Each instrument provides me with a different texture and/or colour, which I can apply and adapt to each project. Very often, I spend time on a particular machine without trying to extract anything in particular, just to explore and push the limits of the equipment and get more acquainted with its possibilities. It’s an empirical sort of approach, I guess.

When did you set up the studio and how has it built over time?

I began producing music in the middle of the 90s, and at this time, I had an ATARI ST running Cubase, a Roland JD-800, and eventually, I brought in a Kurzweil K2000. Through the years I’ve always hit up the second-hand shops, eBay and cash converter shops in hopes of finding the equipment that I had always dreamt of having. I have a real passion for old synths so, yes, I do have quite a collection. But I have also improved the signal path over the years.

What DAW do you use and why?

I have the habit of beginning my projects on Ableton Live because it’s just so much fun, and as soon as I have an idea that begins to take shape, I take it over to Logic. I prefer its layout for mixing, and it is also much easier to interface with external hardware in Logic.

What’s your favourite piece of hardware in the studio?

It’s hard to choose, but it’s probably the ARP 2600. It’s the synth I have been dreaming of since I was a child; the one that I discovered in Jean-Michel Jarre’s albums. It’s a very shrewd and precise instrument that requires little processing to find its place inside a mix. It’s a legendary machine with a soul, a monster of a machine, and the kind that are no longer made today, unfortunately.

How do you use it?

To begin with, there are no presets. So right off the bat, this creates a dynamic in the workflow, a dynamic movement. You have to constantly program it, make decisions and move forward.

Was there a particular piece of hardware you used a lot when making?

Well aside from the ARP 2600 as I mentioned above, I used the ELKA Synthex, the Roland Jupiter 6 and SH-101, the Moog Voyager and Sub37, and the OB-6 quite a lot during the making of the BLISSS album.

Did your hardware choice inspire the harder sound on the album?

Actually no, it was not the machines that inspired a harder sound; it was more about the decision to implement the knowledge I have collected in the past 25 years of music production. I began my career on Laurent Garnier’s label, F-Communications, with a project that was much more techno than what I am producing today and I was happy to return to some of these sounds and to explore more radical avenues.

The titular track on BLISSS has an acid bassline. What synth did you use for this and did you add extra distortion?

That’s an original Roland TB-303 going through an Eventide DSP4000. It’s crazy to see how much you can achieve with such a rudimentary and simple machine, almost 40 years after it’s release.

What elements of acid bassline have you used throughout the album and why?

There is also an acid bassline in the song Here To Forget You, which was also created with an original TB-303. That’s actually the only acid bassline I have in the album as I don’t like using clones.

What’s that lovely pad sound in the track?

Why thank you, that’s a Roland Juno 106 layered with the Native Instruments Strings Soundbank.

Is that a go-to for pads? What’s your favourite for drawn-out emotional sounds?

Not really, I was looking for this particular colour in this track, but most of the time for pads I use the Roland Jupiter 6 or the ELKA Synthex.

What hardware do you take with you on tour for your live sets?

I have a couple of controllers, a Roland TR-8S drum machine, a Moog Slim Phatty, and a MIDI keyboard. I try to keep my setup as compact and efficient as possible. I prefer to have less equipment on which I can interact more fluidly than to be drowning in a sea of gadgets.

Never enough. The only thing I know is that music is 80 per cent work, so personally, I have to be in there sweating it out for many, many hours to find the sounds that support a flash of inspiration.

Has lockdown life made you more creative in the studio?

Most definitely! Time is a luxury that I rarely had access to while on tour. I learned to prepare sessions on tour using my laptop, recording bits of ideas here and there but nothing can replace the time spent in a real studio for a couple of reasons. Firstly, a studio is a space dedicated to creation; you don’t have the distractions and time constraints that you have on the road. You are basically with your instruments, and you’re required to face yourself. Secondly, there’s the magic of working with analogue equipment, the accidents that generate greater ideas. Finally, in a studio, you are obliged to take decisions. In the transient laptop work mode, you can continue to tell yourself that you’ll develop the idea later or finalize it at another moment, but in a studio, you must make it come to fruition.

What advice would you give to budding techno producers?

Contrary to what my studio might suggest, I think it is important to have a small collection of machines but to know them very well. One of the common traps is getting lost in the endless possibilities, in the sound banks, presets, plug-ins. It is crucial to define a palette, a sonic signature and an identity. You can’t be afraid to be yourself, I know it sounds a bit cliché, but it is a lot harder to do than it sounds.

And what advice would you give to anyone wanting to build a studio as great as yours?

Take your time! Learn about the history of electronic instruments and identify the machines that truly inspire you to create, because after all, a great studio is simply a studio that matches you and translates your ideas into beautiful music.

You can listen to Rodriguez Jr.’s latest record BLISSS here.