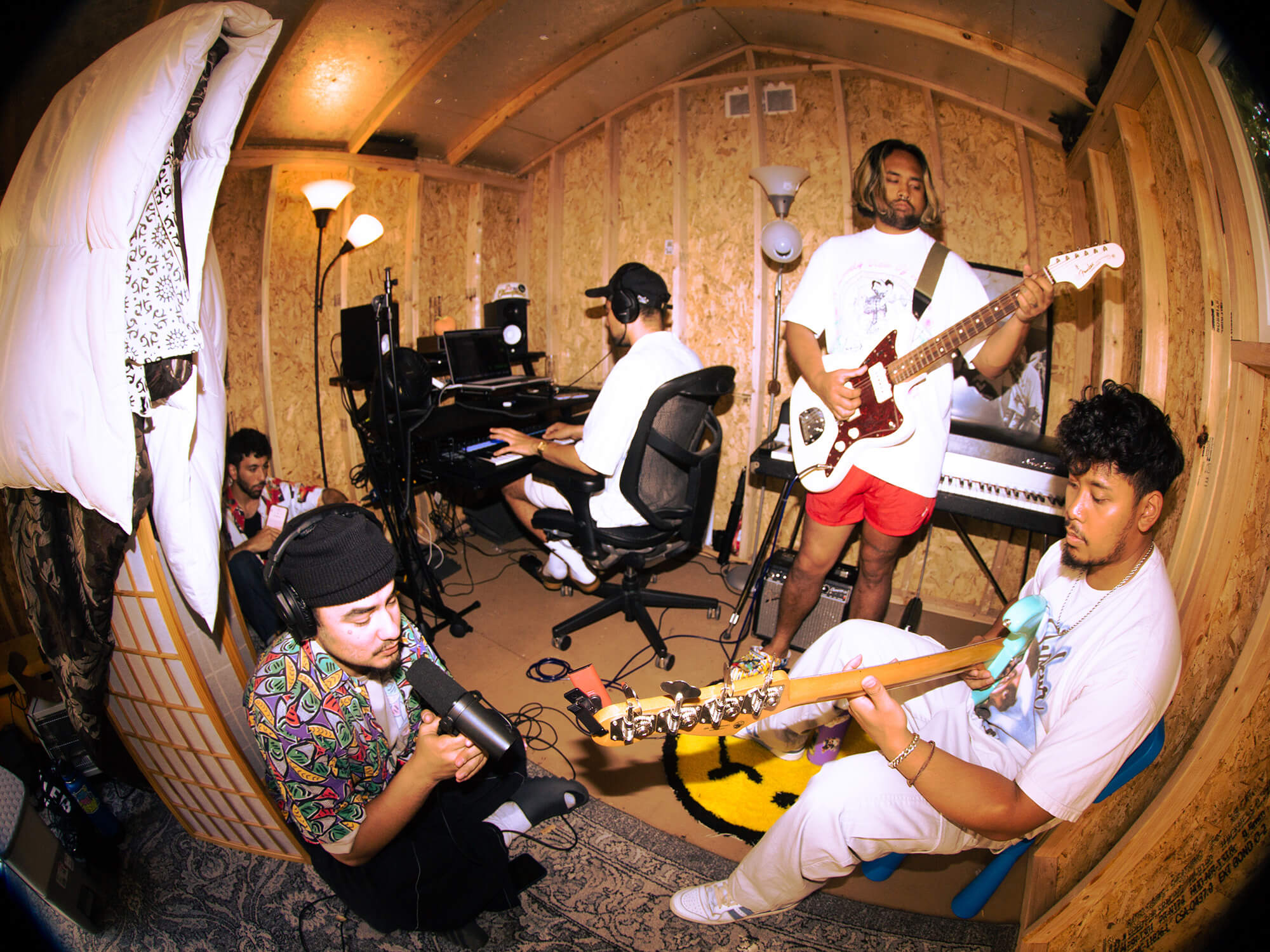 Show Off Your Studio: Peach Tree Rascals bring out the best of one another in their humble shed setup

“We had the bare minimum to record but we did the best we could with it.”

You may recognise the sunny rays of Dominic Pizano, Issac Pech, Tarrek Abdel-Khaliq, Joseph Barros , Jasper Barros, EJ Atienza and Jorge Olazaba – AKA Peach Tree Rascals – from their track Mariposa, which went viral on TikTok and is on its way to racking up a whopping three hundred million plays on Spotify. However, their tracks aren’t all fun and sunshine – the band channel darker emotions through a happy sound inspired by Stevie Wonder and The Beatles, hoping to evoke a sense of “hope”.

From their humble, dry-wall lacking shed studio in LA, the band tell MusicTech about how they’ve made do with stock plug-ins, how a segmented recording process has resulted in detailed precision and how Dominic has finally got his hands on a dream Rhodes keyboard.

Hi guys! Your new EP Does A Fish know It’s Wet? will be your biggest release since your first album, Camp Nowhere. What’s changed since then?

Tarrek: We’ve done a lot of shows and our mental health got a lot better with things opening up after the lockdowns. We have a Fender Rhodes that Dom has been dreaming of since high school and we have way more experience now. Our taste in different music has expanded now too because of all the new music coming out!

How does your songwriting process begin?

Tarrek: Well, the songs always start with the chords, which are either Jasper or Joseph on the guitar or Dom on the piano. Then, once the chords are set, myself, Issac and Joseph will come up with our own melodies and verses individually. There’s no real order to it – we just come up with whatever comes to us first.

Your tracks ooze sunshine and good vibes. Is that an essential feeling to have in the studio?

Tarrek: There are some sad lyrics and moments of whatever we’re going through but the chords are usually brighter than how we’re feeling. We try to take those feelings and let them out.

Dom: I think a lot of the music we listen to has an impact. It’s happy music. We listen to artists like Stevie Wonder, who has a very positive sound, so we take the feelings we get from that and apply them to the music. 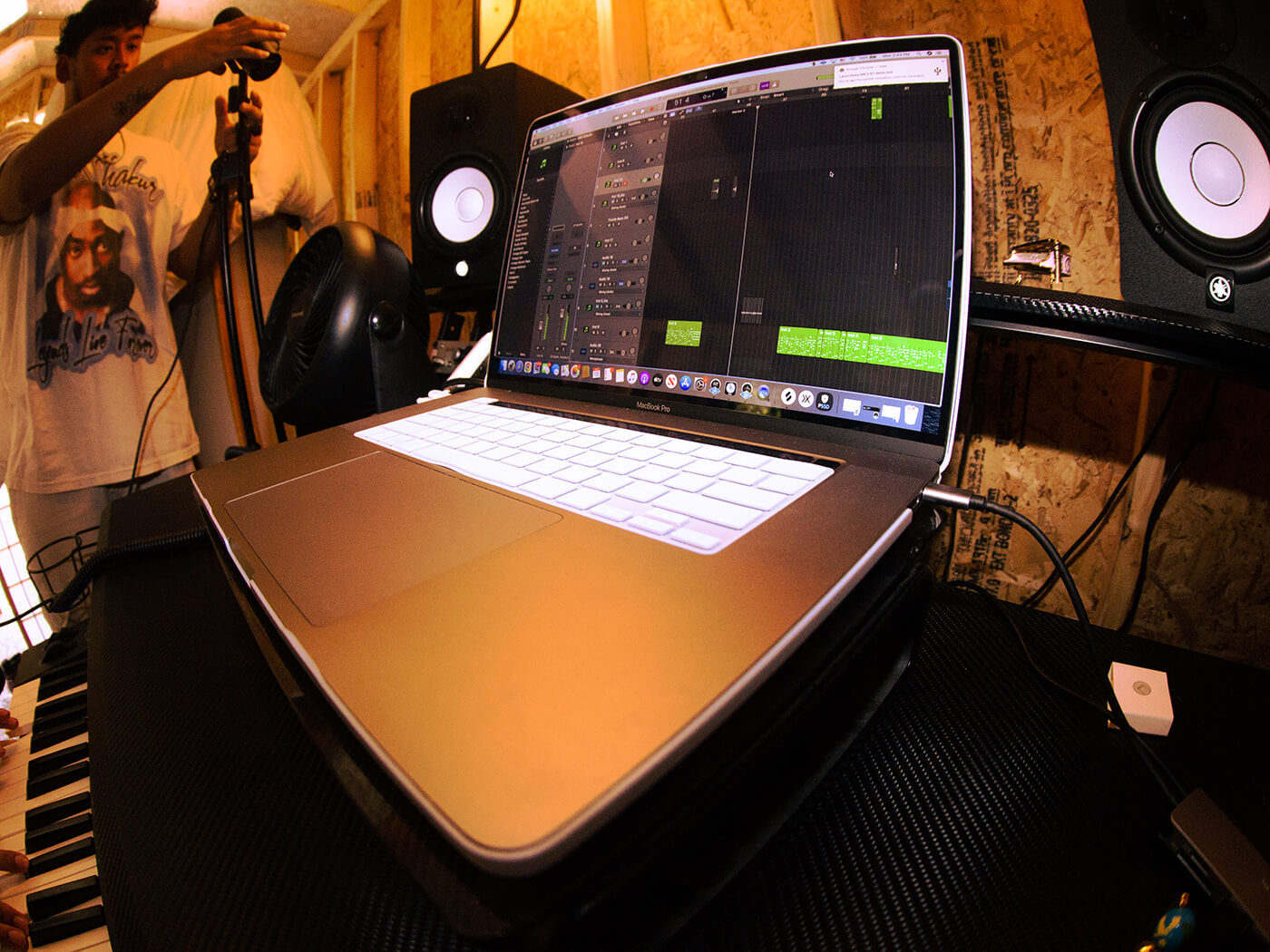 Dom: Our first ‘shed’ was in San Jose – it was nothing special! A 10×10 ft shed – we didn’t even have drywall! There was no air conditioning, we had a MacBook Air and stock plugins. Up until Mariposa, we used all stock sounds. We just had to work with what we had.

I would buy whatever I saw J. Cole used in videos and we got KRK Rokits. I would just spend all my money – I didn’t care if I was broke. When we moved to LA, we actually upgraded our ‘shed’ – it’s now 10×12 ft but still no drywall. We upgraded the speakers to Yamaha HS8s. We like simplicity – the bare minimum works for us.

Dom: Because of how small it is, I try to record different pieces with different people one on one. Rarely are we able to get everyone in the same place at once. While it has its cons, I try to look at the positives. I can pay really close attention to detail and spend quality time with each band member while we work to get a song done. 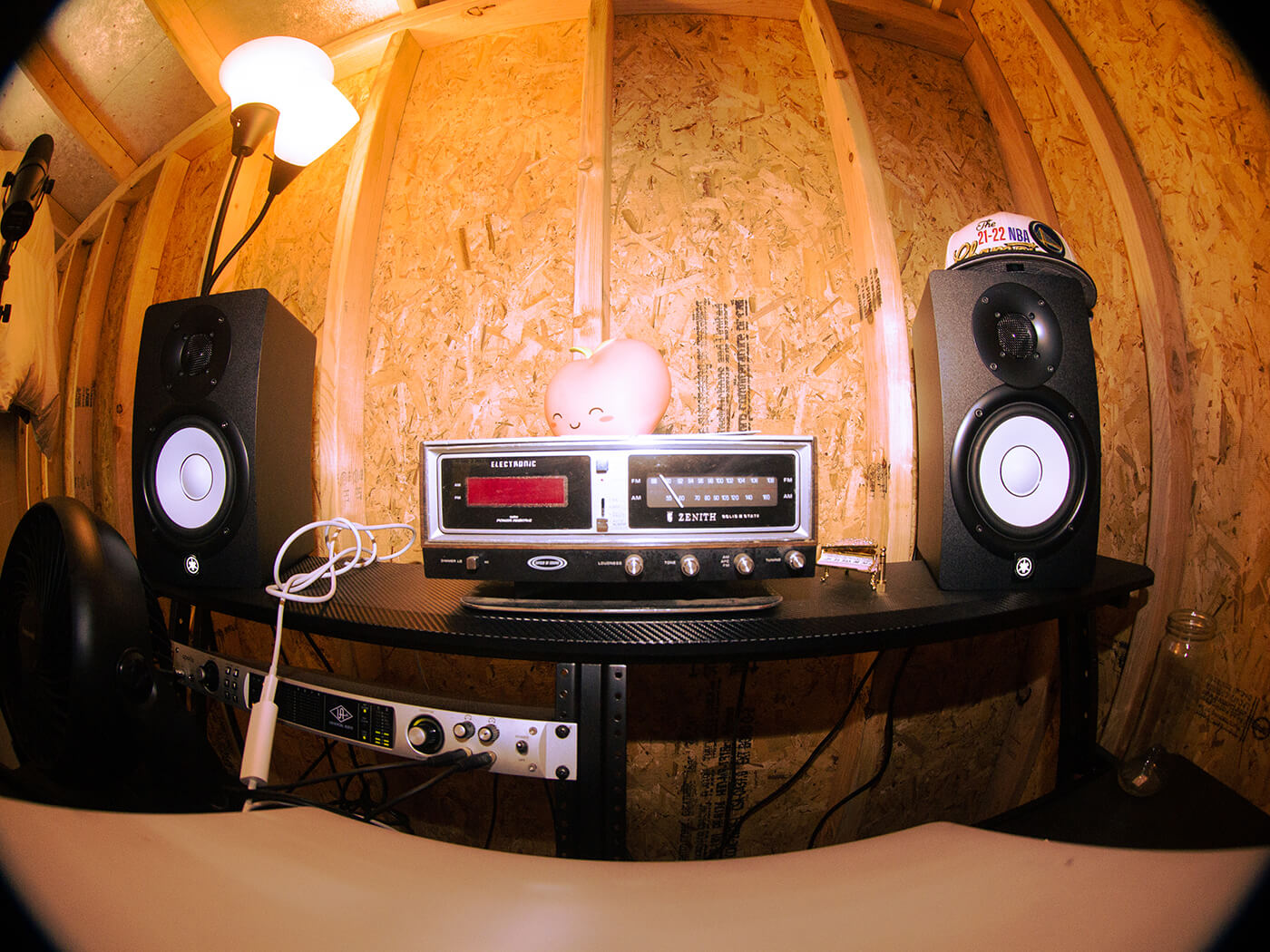 Isaac: For me, it’s the Fender Rhodes. It just has that character to it.

Jasper: My favourite piece of gear would actually be the Fender Jazzmaster. I haven’t been using the Telecaster Deluxe for these recent recordings, I’ve used the Jazzmaster but it sounds great. 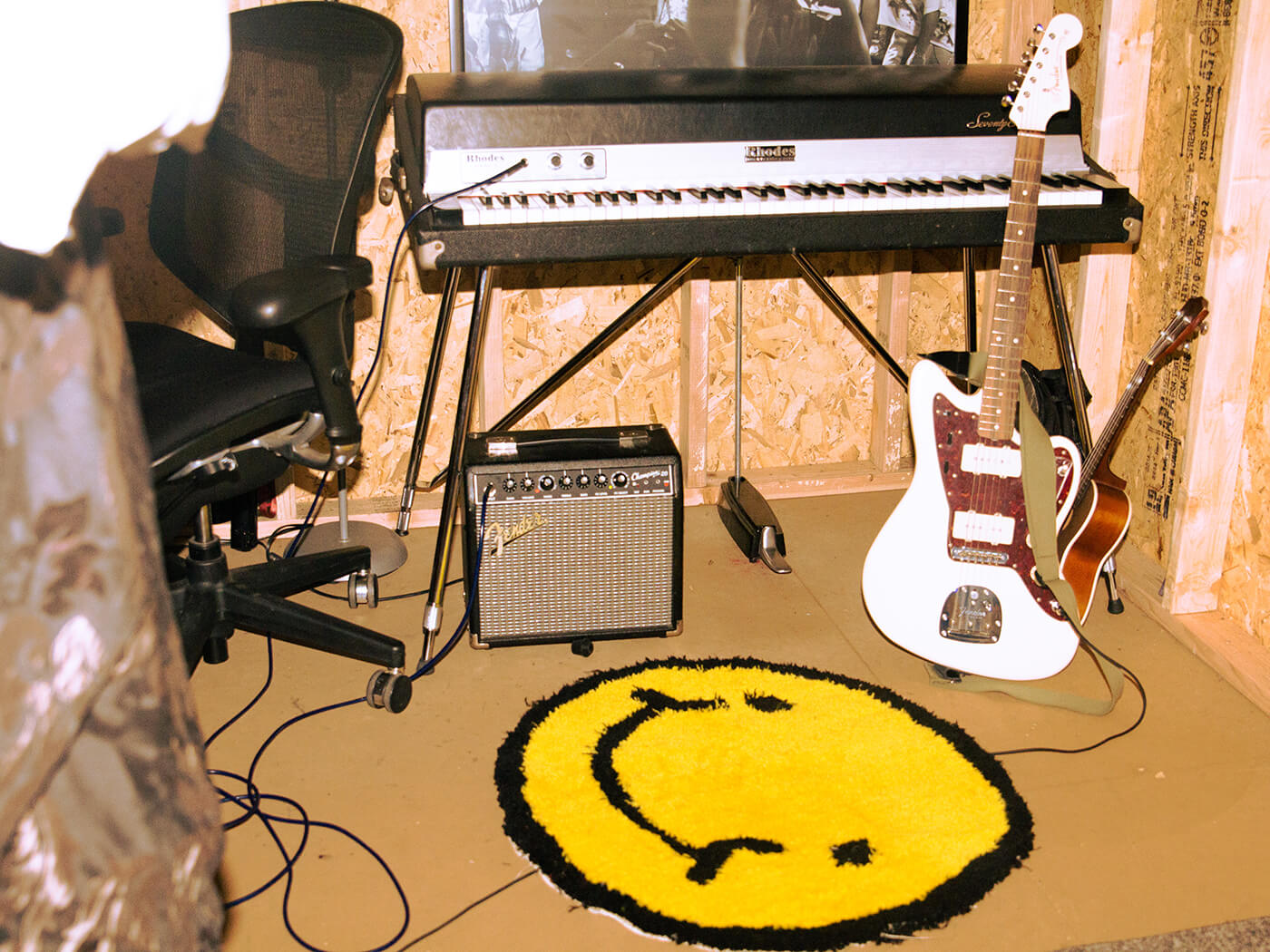 Which microphone do you use and how are vocals processed?

Dom: We use a Shure SM7B. Honestly, we watched YouTube videos and found it to be the best one we could get in that price range.

I’m not too particular when it comes to mixing, it’s more based on the feeling I get from it. If the take is really fucking good, there’s not really much editing you need to do to it.

A grooving bass guitar plays a big part in your tracks. What guitar is this?

Jasper: We use a Fender P-Bass. There are songs where Dom and I will just be jamming and we’ll start a groovy bassline. I played upright bass for several years which helps and influences the sound. Folk music in the Philippines has a lot of bouncing bass so we’ve transferred the energy from that. 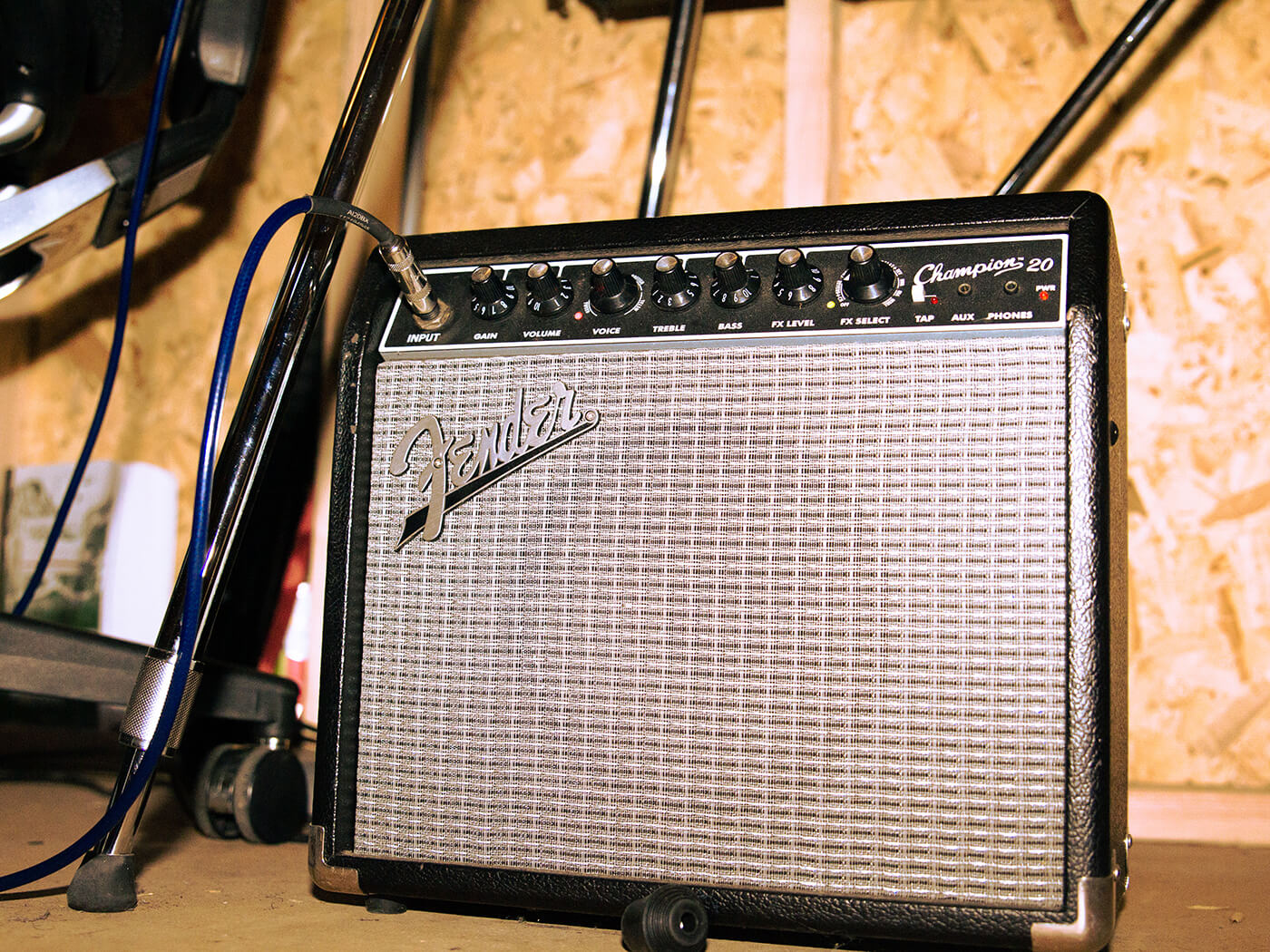 Issac: The shed is definitely the biggest investment because it gives us the privacy to make music and be ourselves without worrying about making noise and disturbing anyone. We saved up for it and it was definitely worth it!

Tarrek: A Mellotron because the strings sound so good. We know they’re not real strings but they have such a classic sound, like Strawberry Fields vibes. And drywall – we live on one of the busiest streets in LA so you can hear the honking. 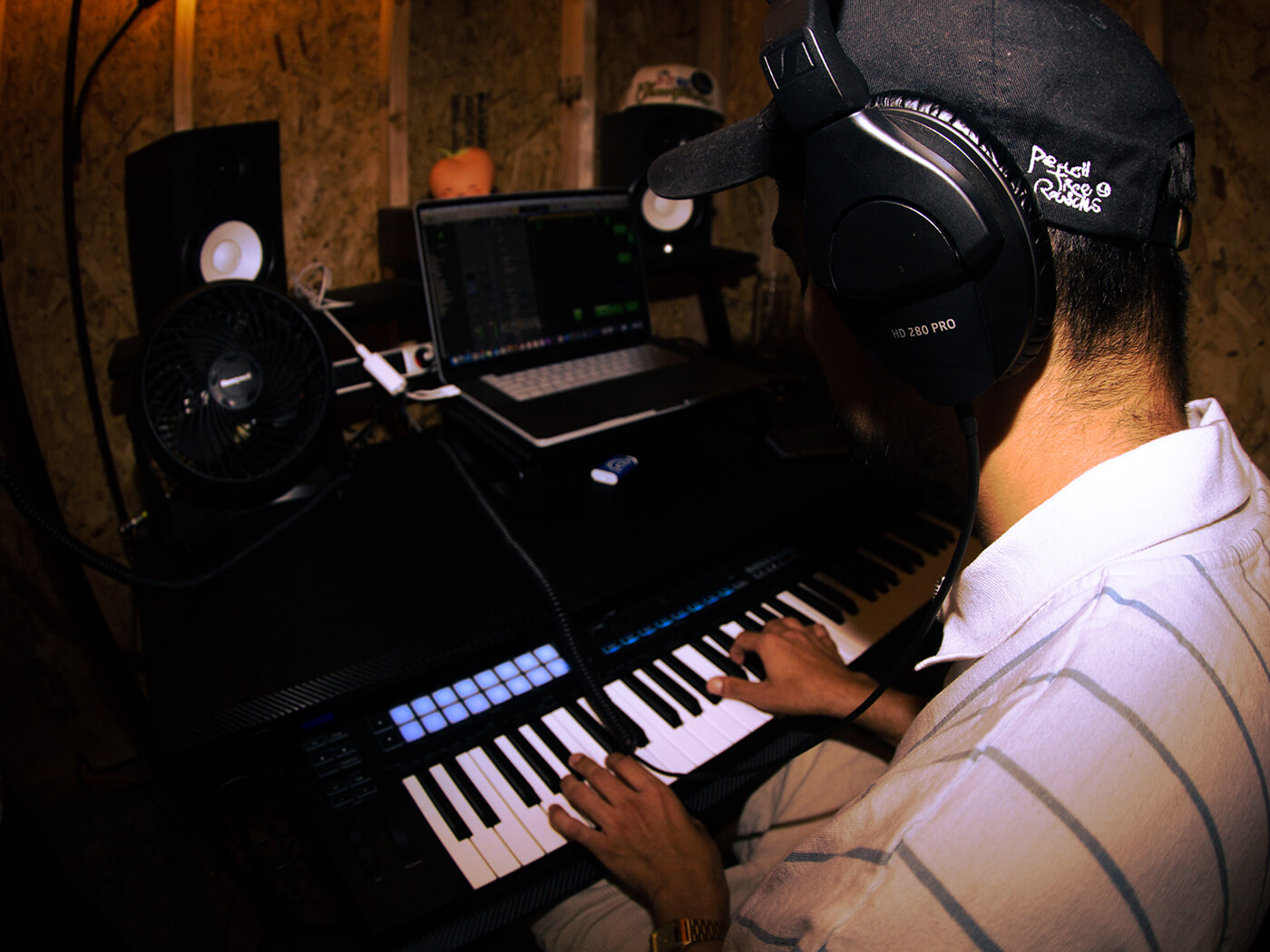 Dom: I already got mine as the Fender Rhodes has always been what I wanted but other than that I’d love a white grand piano!

Jasper: For me, it’s going to be a Hofner Violin Bass that Paul McCartney uses.

Jasper: I would take a mandolin-type instrument from the Philippines called a bandurria. It’s like a 14-string mandolin. 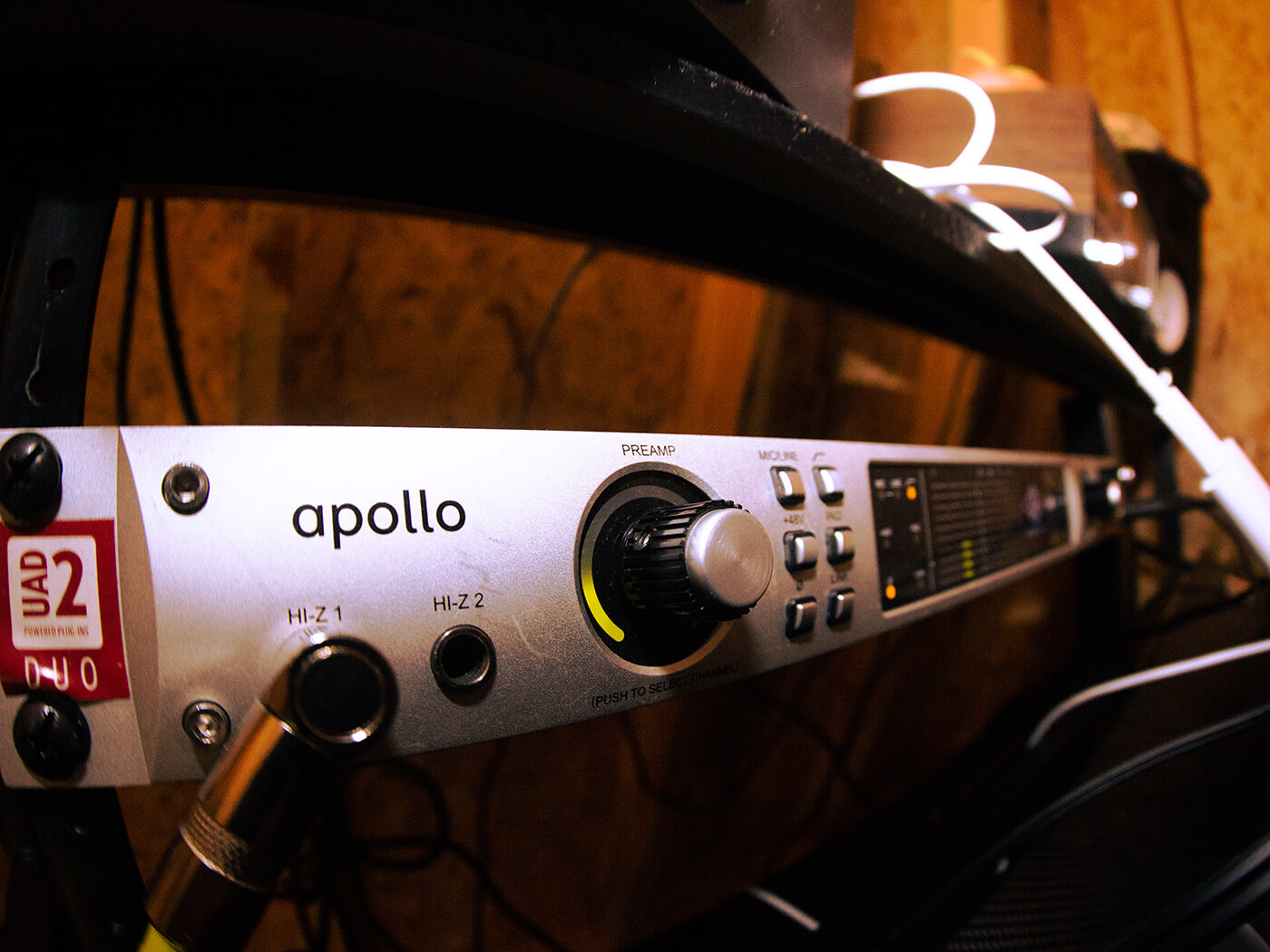 Both: Ha! They don’t exist.

Both: Without drywall – the cars and the outside sounds are the biggest frustration as they can be so loud! Also, we’d like to upgrade our system to a better processing power. We like to do hundreds of vocal takes and stack them, so we need more processing power for that so we don’t keep crashing our computer. A few extra feet of space would be nice too.

Both: Make sure you bring the best out of who you’re recording in the studio to get good takes. Liking your own sound is important because if you don’t like it, no one else will respect it so you need to believe in yourself. Keep working to get a track to sound as close to the idea you have in your head with whatever you have – we had the bare minimum to record but we did the best we could with it.

Also – be brutally honest with yourself without putting yourself down.

Both: You don’t need much. If you’re a producer, all you need is four walls and a computer.

Peach Tree Rascals’ Does A Fish Know It’s Wet is out now.