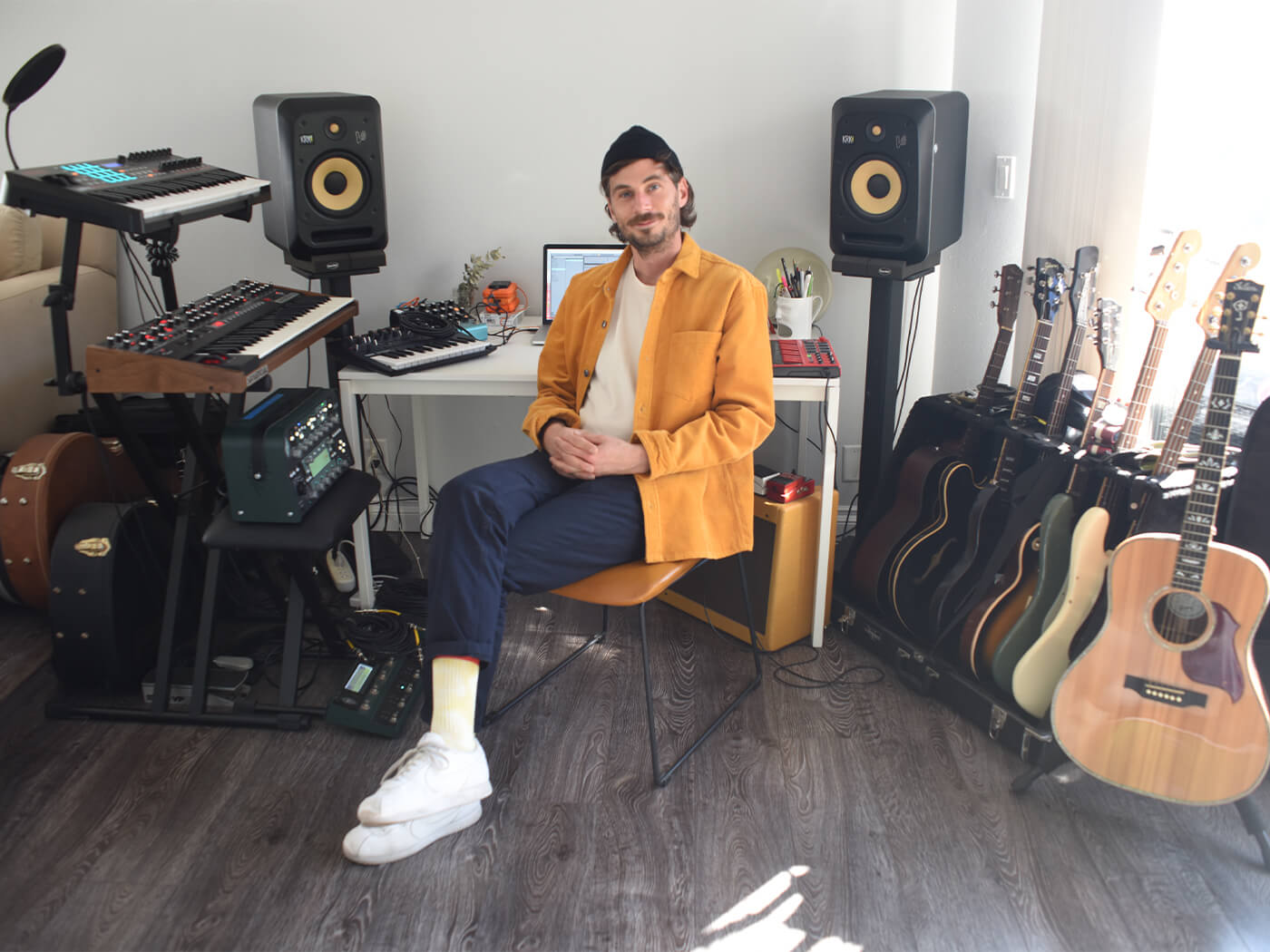 Although he now operates solo, US-based producer Obli has had his fair share of band acts. When living in LA, he made music with Sonny Moore, now known as Skrillex, and played bass in Dead Sara. After finding a connection with music by artists like Bonobo and Shlohmo, he plugged into the world of electronic music and incorporated his enthusiasm for live instruments into his setup.

With upcoming releases on Foreign Family Collective this year and a remix of BRONSON’s CALL OUT, we took the opportunity to head to his new creative space and learn why the UA Apollo Twin is the best purchase he’s made, how he processes his guitars and why checking out your friend’s studios is always important. 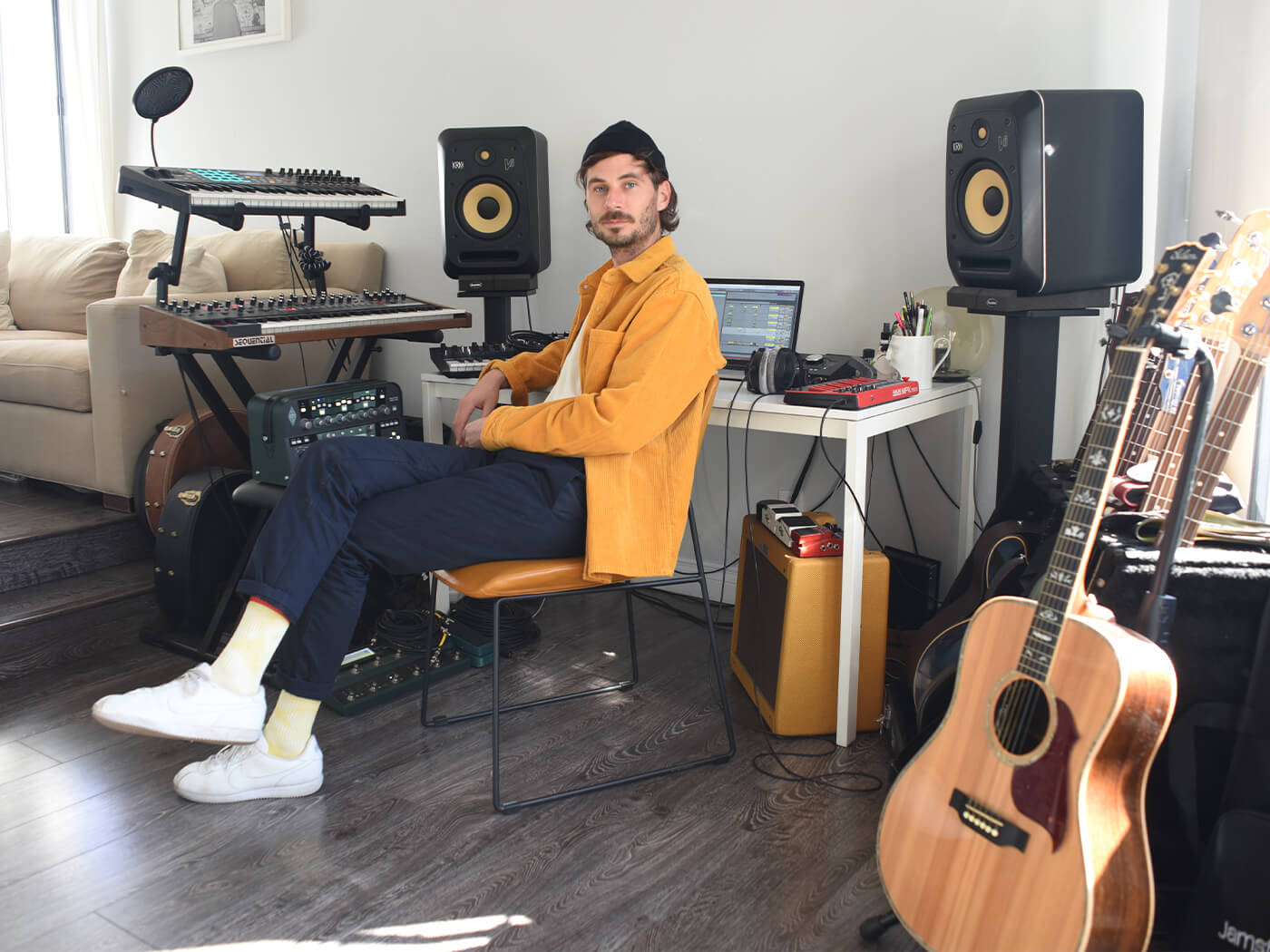 Tell us a bit about the studio, Obli.

My studio is in my apartment in Los Angeles, up Beachwood Canyon. We moved here in September 2020 and it’s basically a similar setup that I moved from in my guesthouse in the valley that I was in for eight years.

I do all my work here. I record live instruments such as bass and guitar but mostly through my Kemper Profiler. I have a Shure SM7B and record vocals with it, but I don’t do many things that require a mic. I actually purchased a Sphere L22 Microphone in December last year but it’s still on backorder. I’m supposed to get it in March and hope to do more live instruments and vocals with that. 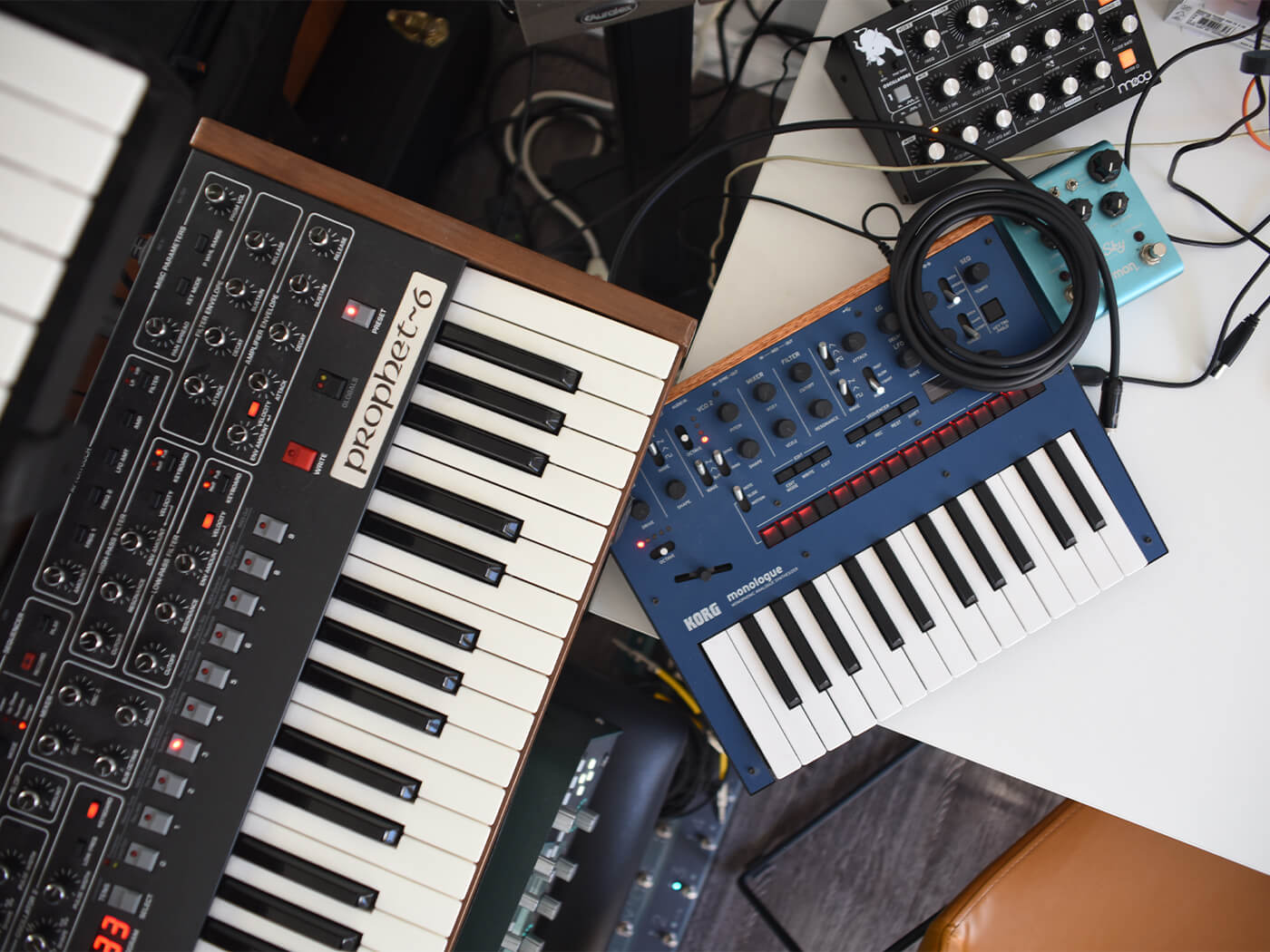 I use Ableton Live. It’s what I learned on and I think that’s the main reason I still use it. It’s easy to put together basic ideas quickly, especially when I’m sampling. I heard Live 11 has comping, which I cannot wait for.

I work alone so I love to work as soon as I wake up – my mind is fresh and my ears are fresh. I often achieve the most in the first three to four hours of the day. It’s been a minute since I had a singer or another person over, thanks to COVID-19, but I want my space to be one where people feel comfortable and creative. A place where no idea is a bad one. 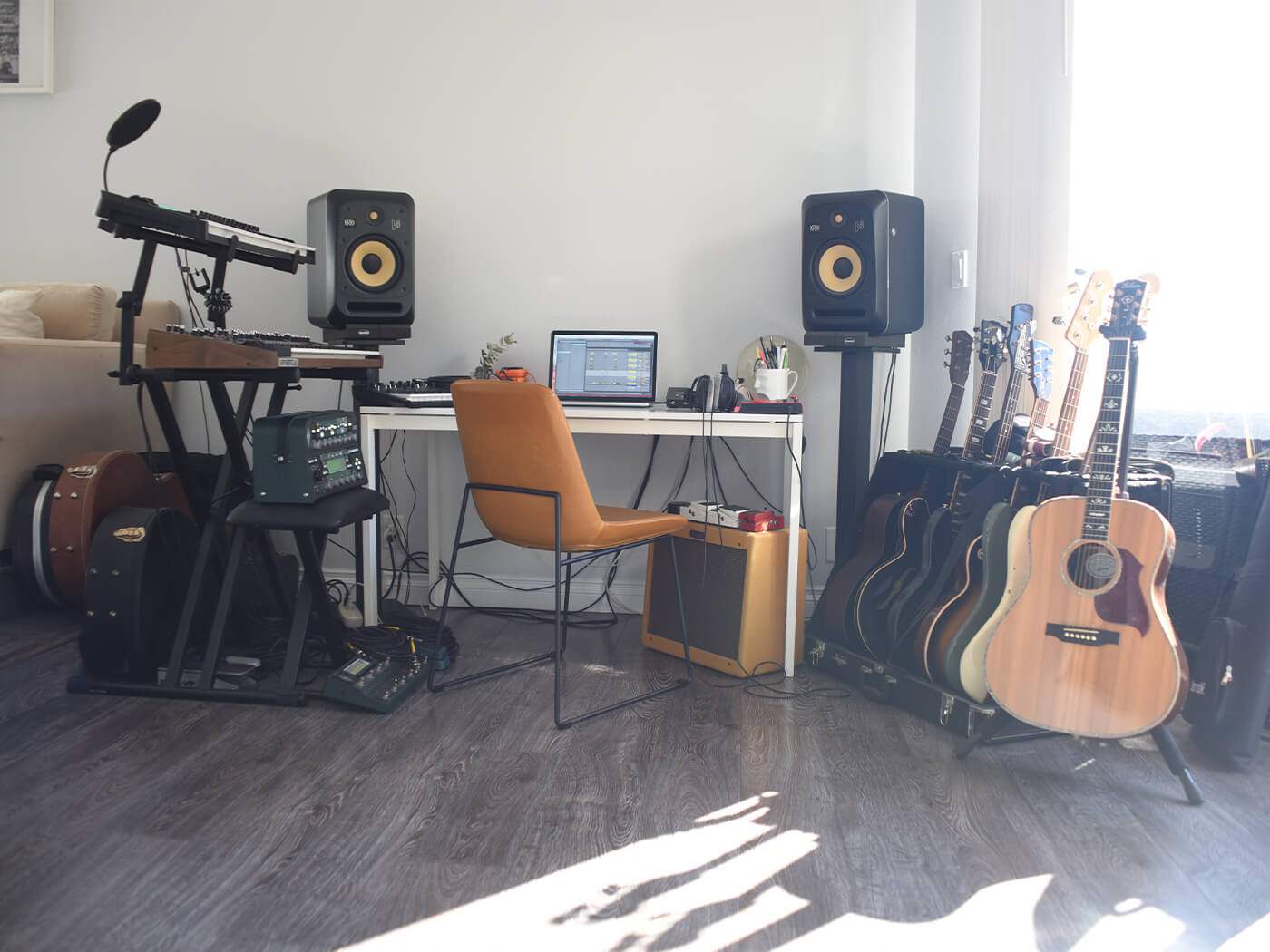 Currently, it’s the Sequential Prophet-6. I purchased it last year so it’s a relatively new addition. I’ve used (and still use) the Arturia software emulation but playing the real thing and getting some compression and EQ on it is so good and opens up new ideas right away.

How are you processing your guitars?

I run them through the Kemper into my UA interface. I do a little compression going in and then I love to use plug-ins after to add some saturation or other effects to the idea. 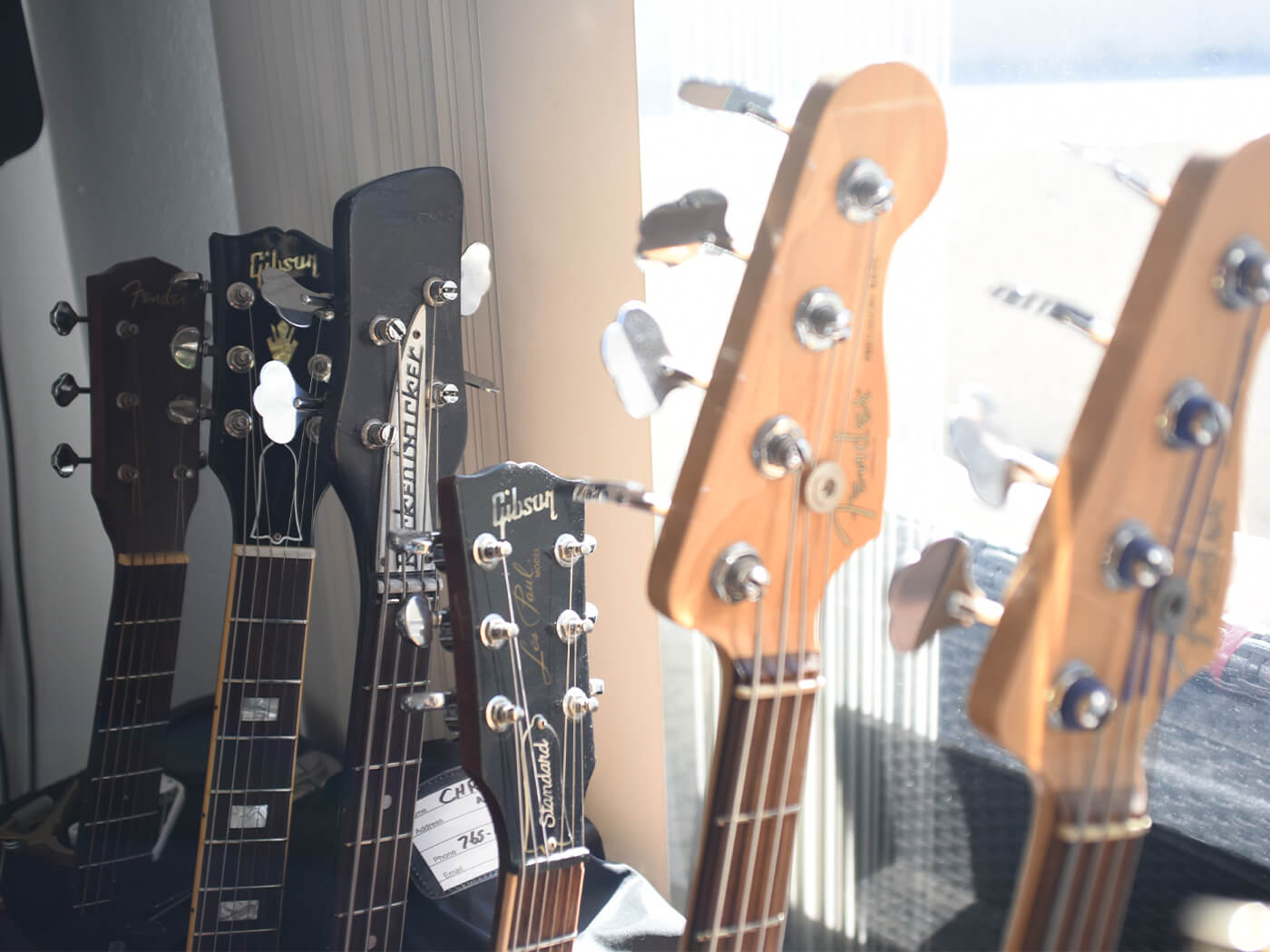 What synth or effect can be heard the most on your new Bronson remix?

The guitar and bass riff was recorded through the Kemper and then I had fun using Soundtoys’ Little Alter Boy to give it a more chorus and warbled-out sound. The key sounds on this that I like a lot are a combination of a Serum patch and the Prophet.

We can hear the influence of Bonobo and Shlohmo in your music. How do you channel this inspiration?

It’s in the feeling and emotion of the music. It wasn’t until I discovered artists like Bonobo, Shlohmo, Four Tet and Caribou that I thought I could even make electronic music that anyone would want to listen to. Because, to me, they may not be the most technical producers but they convey an emotion that resonates with me. And their productions sound amazing.

You used to hang with Skrillex. How much of an influence did that have on your electronic music career?

Sonny showed me Ableton Live and got our whole crew at the time into using it. That was definitely game-changing in terms of starting the path of making music on my own. He also has one of the greatest work ethics of anyone I have ever met so he is always that point of reference of what it takes to be truly great at something. 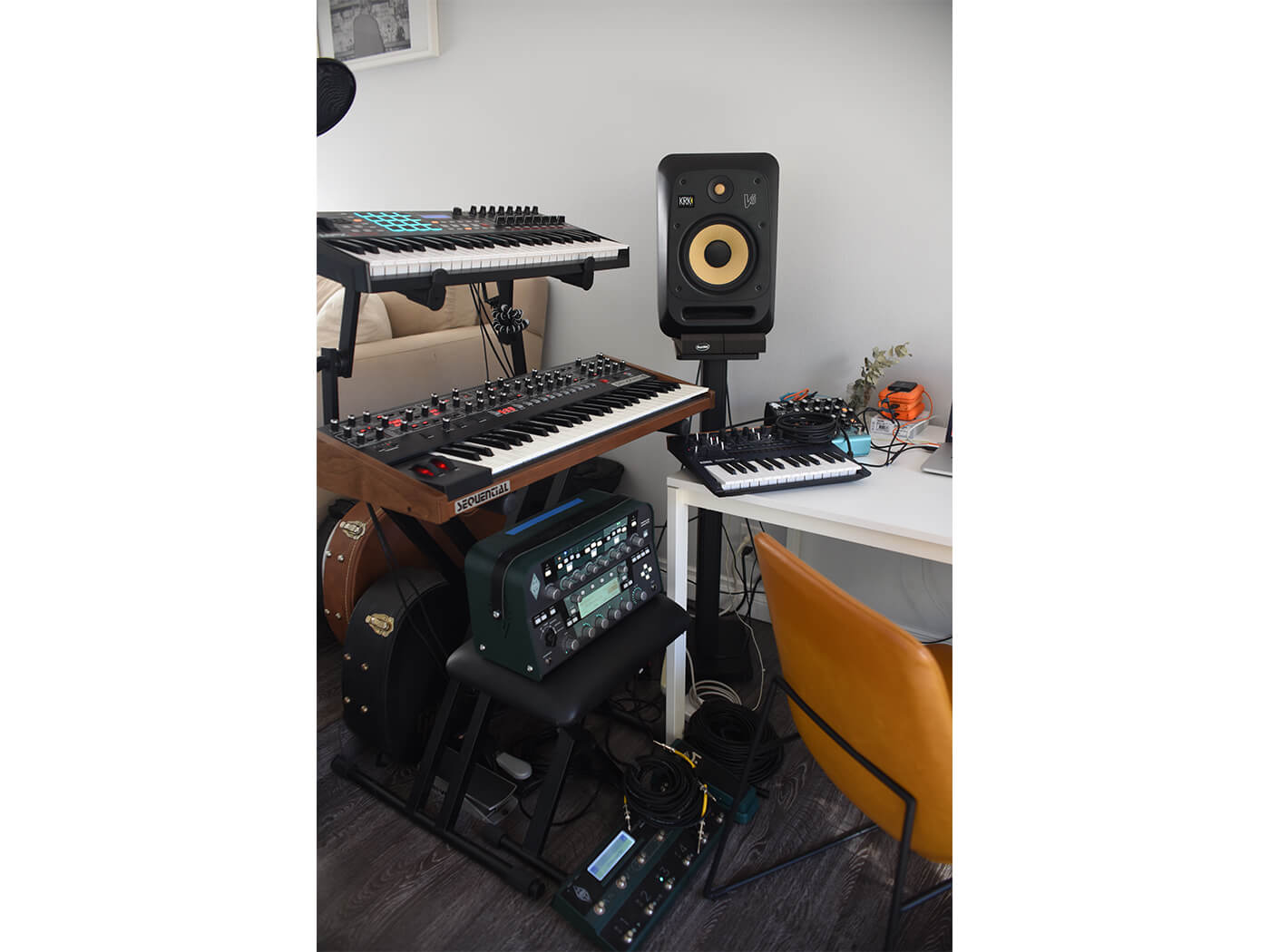 I would take my upright piano. I grew up playing guitar and, even though I am way better at guitar than piano, I love playing the piano so much. I suppose with the free time I would have on a desert island I could probably get quite good at it.

The two most expensive things I have, besides my computer, are the Prophet-6 and KRK V8 monitors. Both were worth it but I would say getting the UAD Interface was the best purchase, even though that was cheaper than the other two things. 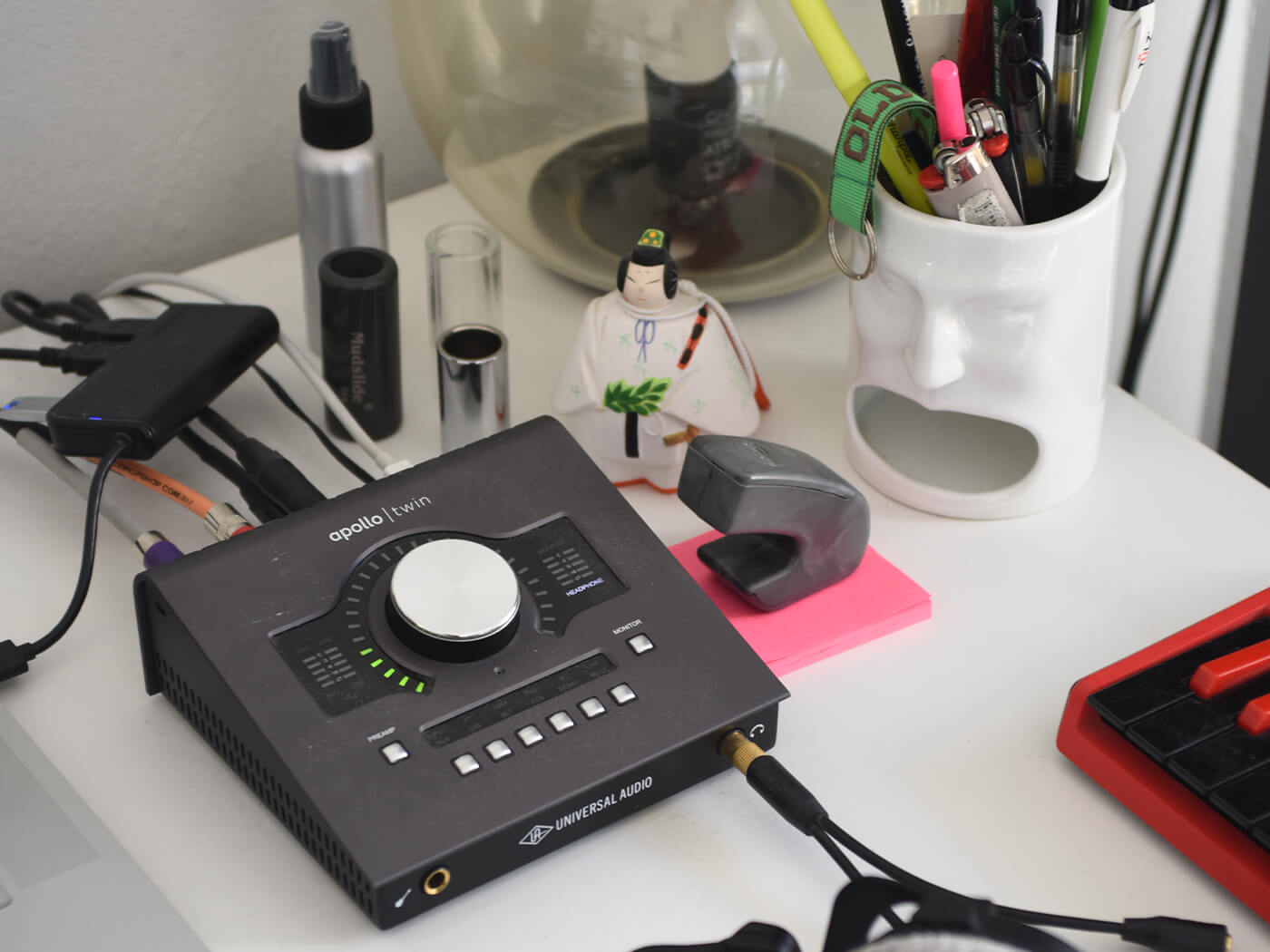 How do you deal with the acoustics in the studio?

Now that my studio is an apartment, I have been working a lot and mixing a lot in my Beyerdynamic DT 770 PRO headphones. They are extremely flat but I have been pleasantly surprised by my mixes, especially when I take them out to my car. I still switch to my KRKs to monitor with but not as much now with being in the apartment. 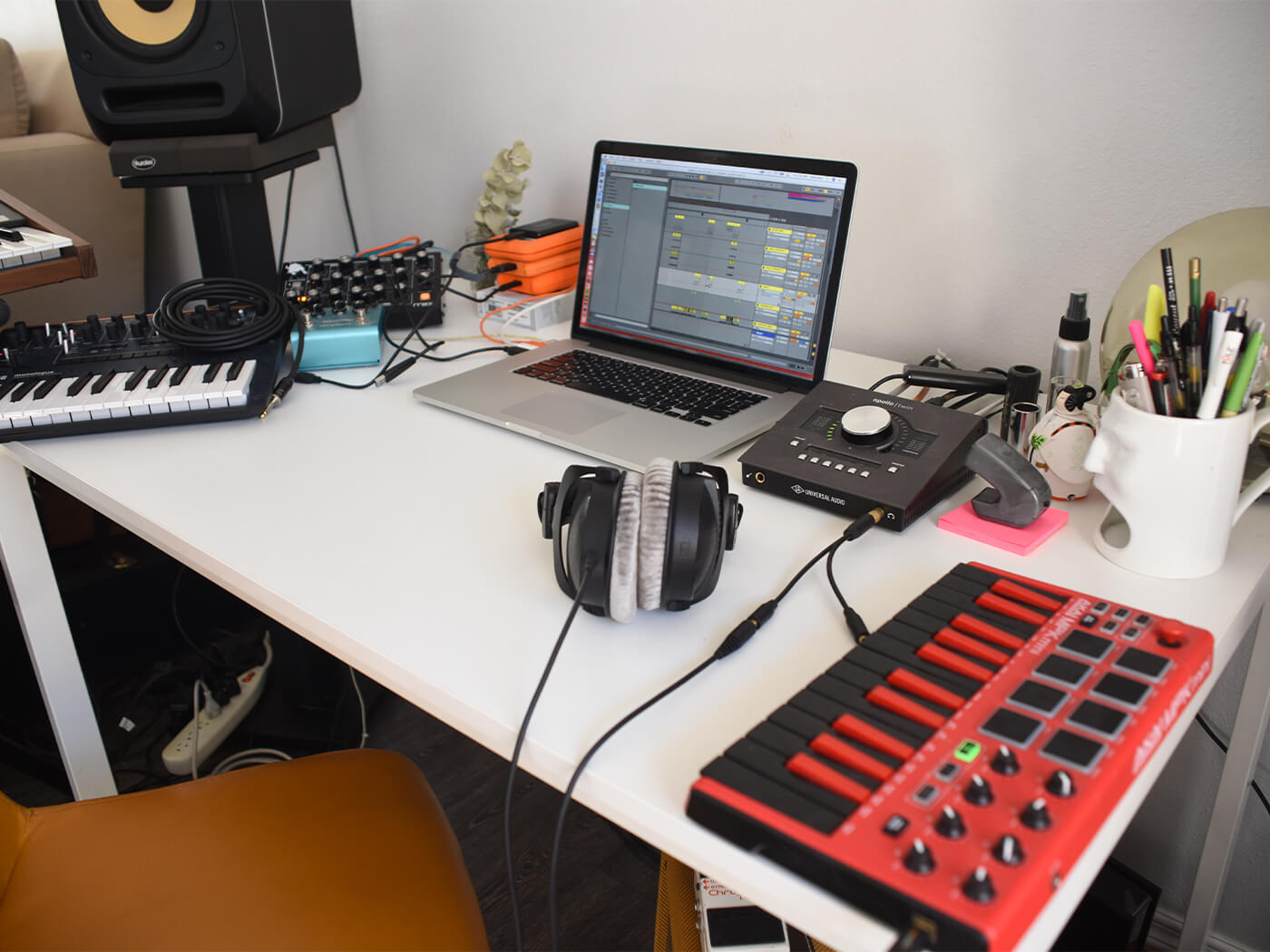 I just bought a new MacBook Pro laptop and I am finally ready to set that up and transfer everything over. I am sure I’ll have a few upgrades and purchases along the way with that. Gear-wise, I am looking at getting a few drum machines to have around. I messed around with the Elektron Model: Cycles 6-track FM based groovebox at Perfect Circuit in Burbank a while ago and was getting cool beats immediately from that. I am a big fan of things that you can get good sounds out of right away without much difficulty. 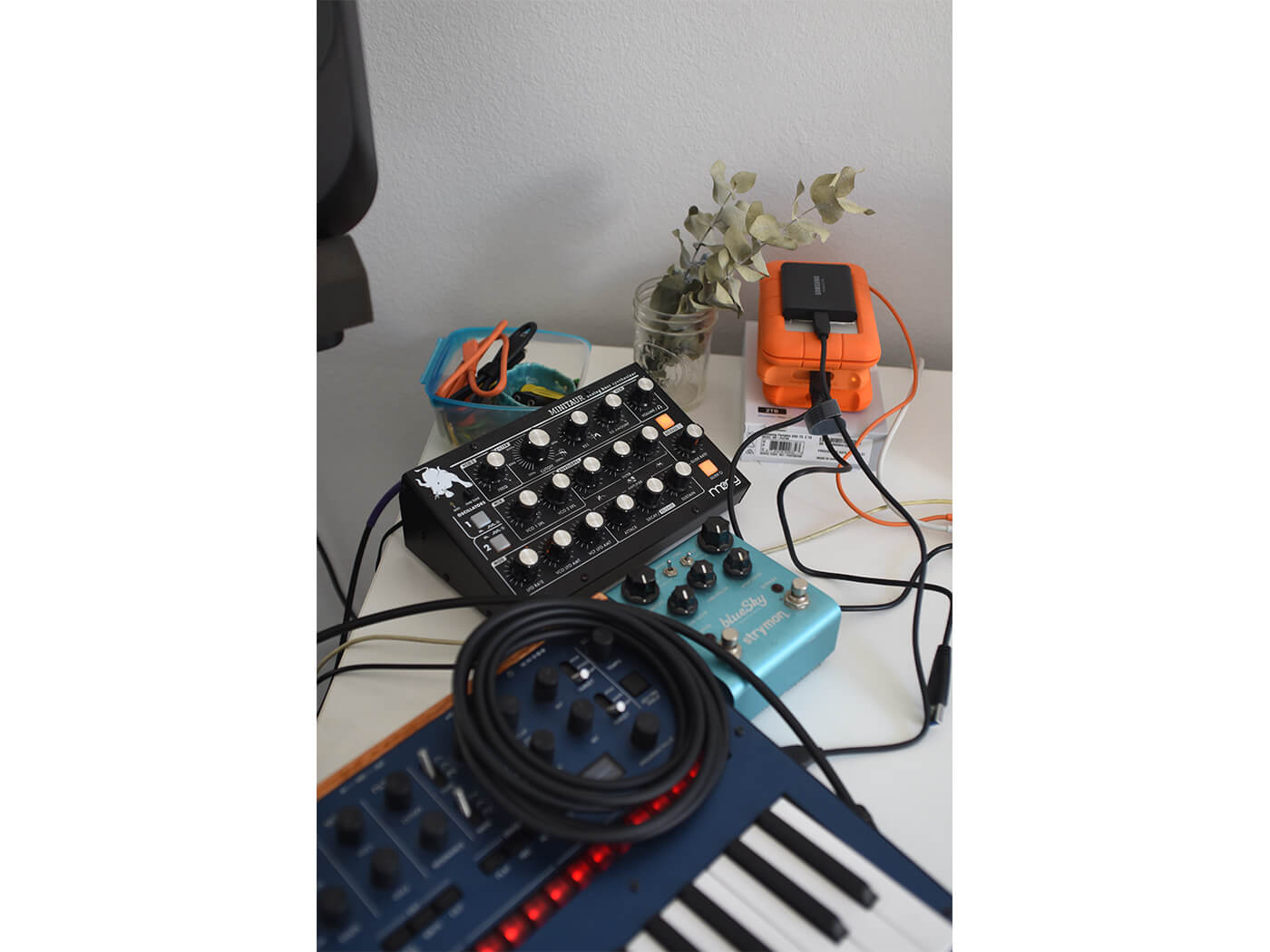 I don’t think I have one really. I’d love to be in a space someday where my piano was set up and mic’d properly at all times and same with guitars and some amps. I do miss hearing things loud and in a room.

I think it’s easy to get lost in the mindset of if only I had this piece of gear or this synth or this guitar’. None of that really matters. Your enthusiasm for music and your ability to make what you have sound good and your attention to the song and its parts is going to be more important. When I think about adding things now to my setup I mostly ask myself the question ‘is this going to make the process more fun’? 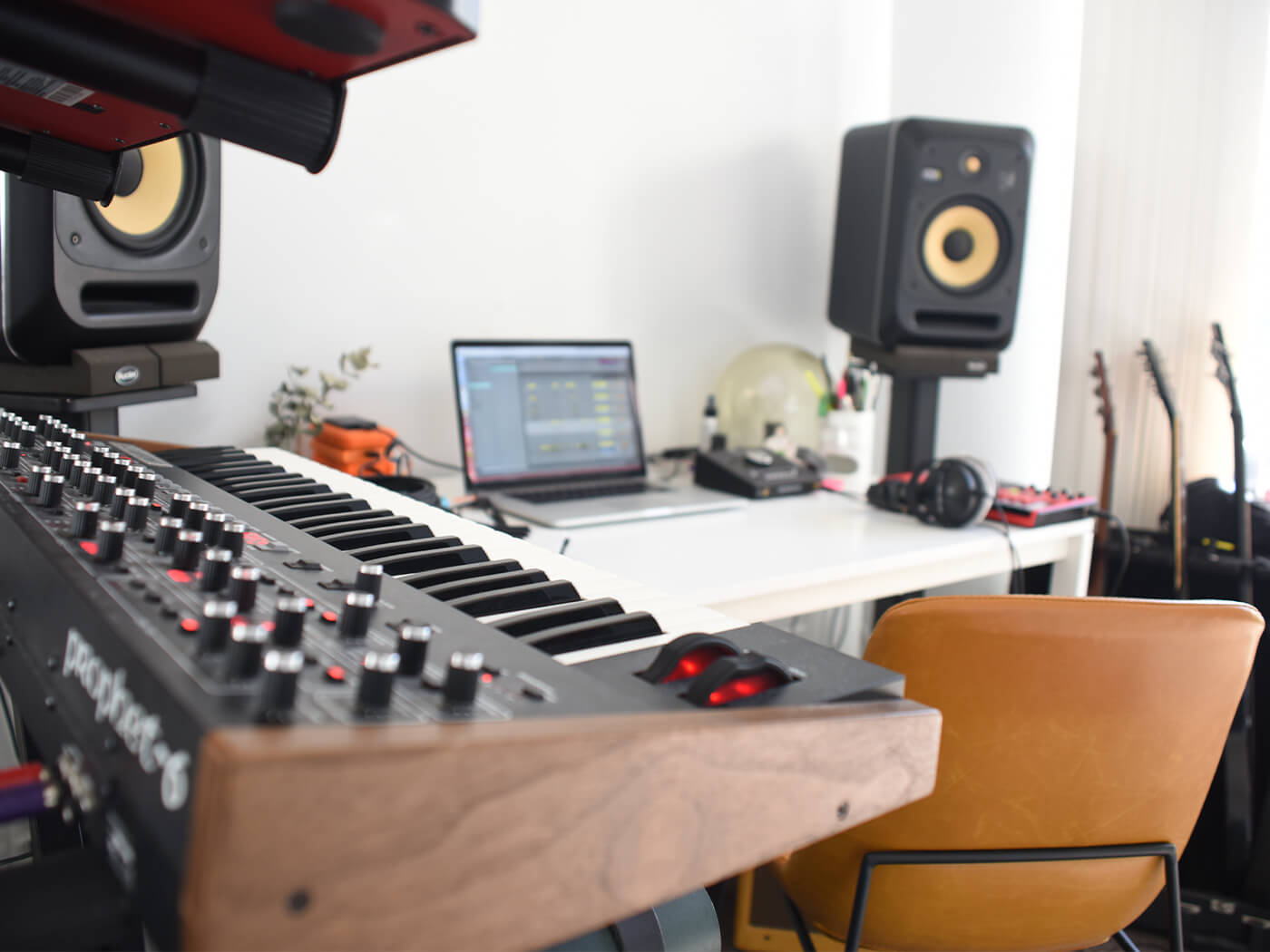 Talk to your friends who have setups and ask them what is working for them and what isn’t. Go to their studios and see their setups and workflows. There is almost always something that my friends are doing that I would have never thought of. Sometimes it’s worth adding to your setup and sometimes it isn’t. Either way, it’s good to know what other people are doing and what is working for them.

CALL OUT (obli Remix) is taken from BRONSON’s Remixes Nº.2 EP which is out now on Foreign Family Collective/Ninja Tune. Listen to it here.
#Artist/Producer/DJ#Studios