With the release of his album Pure Luxury, UK indie disco artist NZCA Lines invites us into his studio and shows us what gear sparks magic. 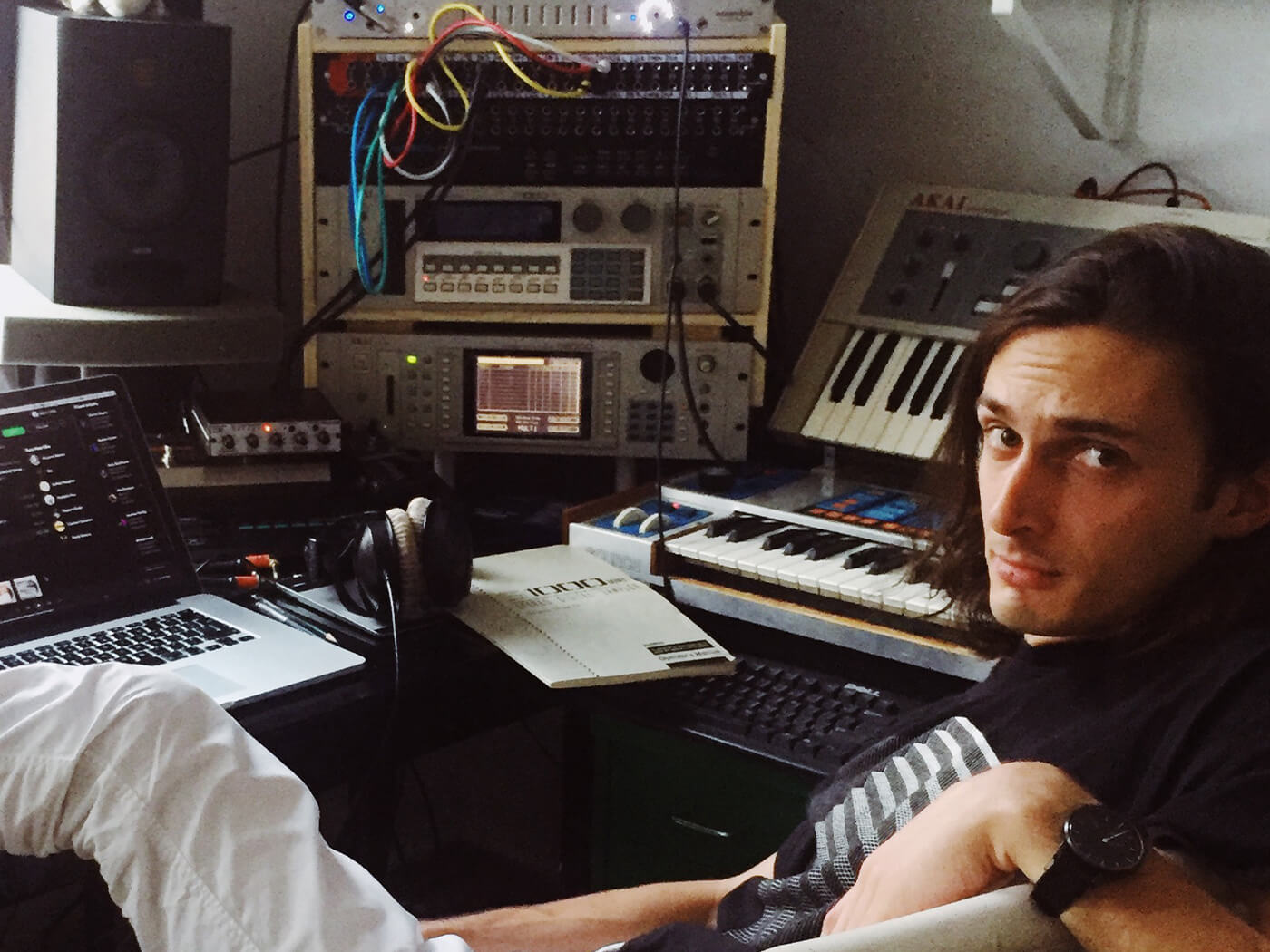 Tell us about the studio, NZCA Lines!

Although I’ve owned some of this equipment for a while, I really started putting this setup together whilst making Pure Luxury, and it’s actually been quite mobile. I started out in Margate, UK, where I’m based, but then I took several pieces of equipment to New York City, where my wife was living at the time. Additionally, I set up in a friend’s studio for several months during the finishing stages of the album, so I’ve had three studio locations. 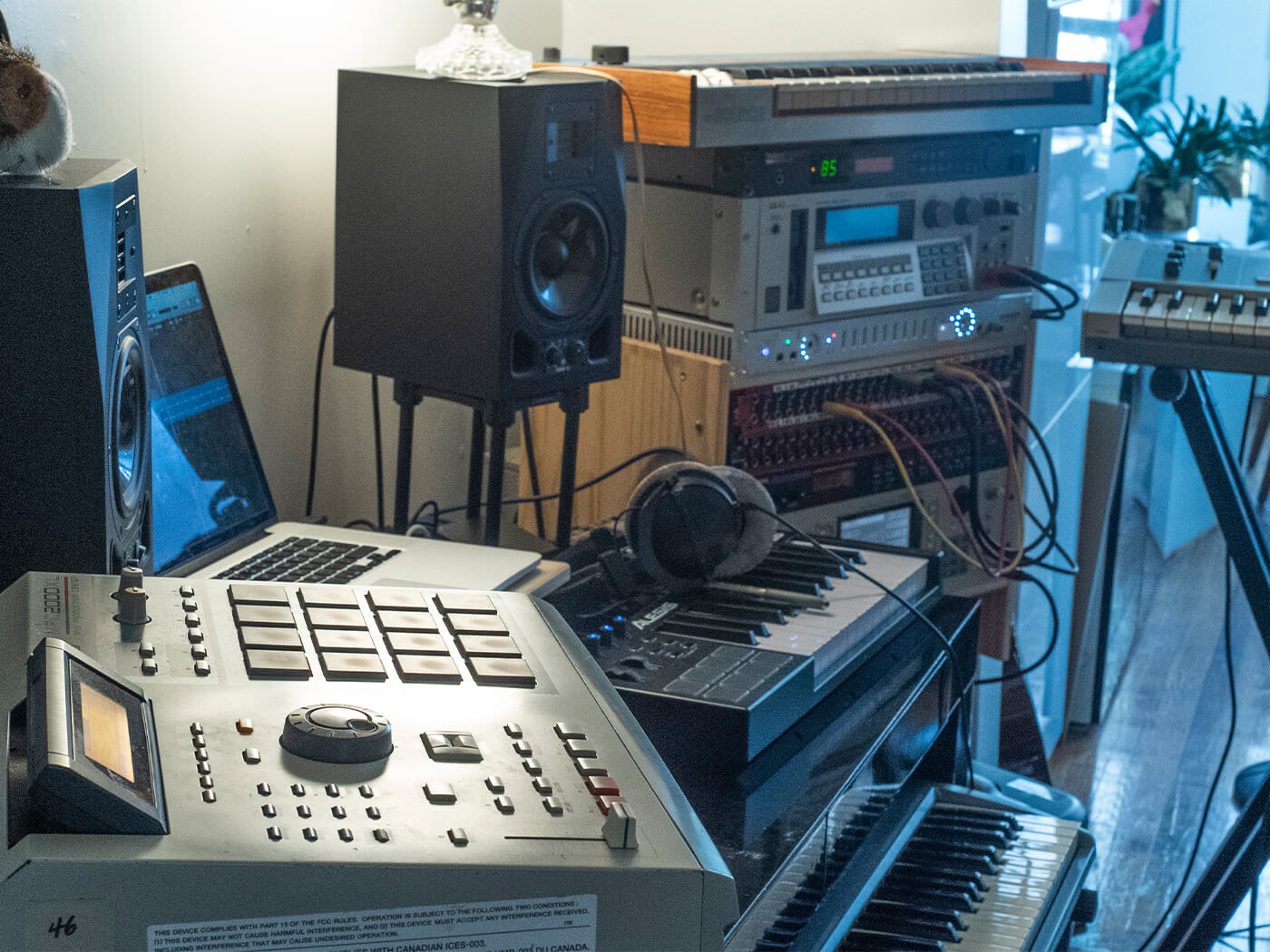 The idea behind this setup was to write music without focusing on a laptop. The Akai MPC acts as a central controller, through which I can play or sequence my synths. The hardware samplers (the S5000 and 1000) were used for building multisample instruments, recording whole loops from synths or drums for playback, or for their own unique sonic characteristics. Whilst I don’t really have a proper multi-effects unit (I’d love an Eventide H3000), I have a collection of hardware pedals such as the Boss CE-1 chorus, OTO reverb and EHX Memoryman delay, alongside some quirky multi-effects like the Alesis Quadraverb. These are all wired in and can be patched easily, and I’d often commit to sounds early on, recording the wet signal of a part I liked as a sample on the S5000. Whilst this process is equally possible using a DAW, I enjoyed spending some time away from the laptop and working within these limitations.

I’ve always used Logic for composition. I barely use any of the native plug-ins or soft synths. For live purposes I use Ableton Live and recently I’ve started trying to write using Live, to become more familiar with it. It’s a very powerful and versatile DAW – definitely the closest I’ve seen to the functionality of the Akai hardware samplers in software. However, there are also some weird omissions from Live, especially in terms of MIDI functionality, which Logic does better. So sometimes I end up switching between the two. One thing I would say is that, for a program built around pitching and time-stretching, Ableton’s algorithms are still no match for the S5000. It’s strange that a relatively obsolete piece of hardware should sound so much better than modern software, but it does! 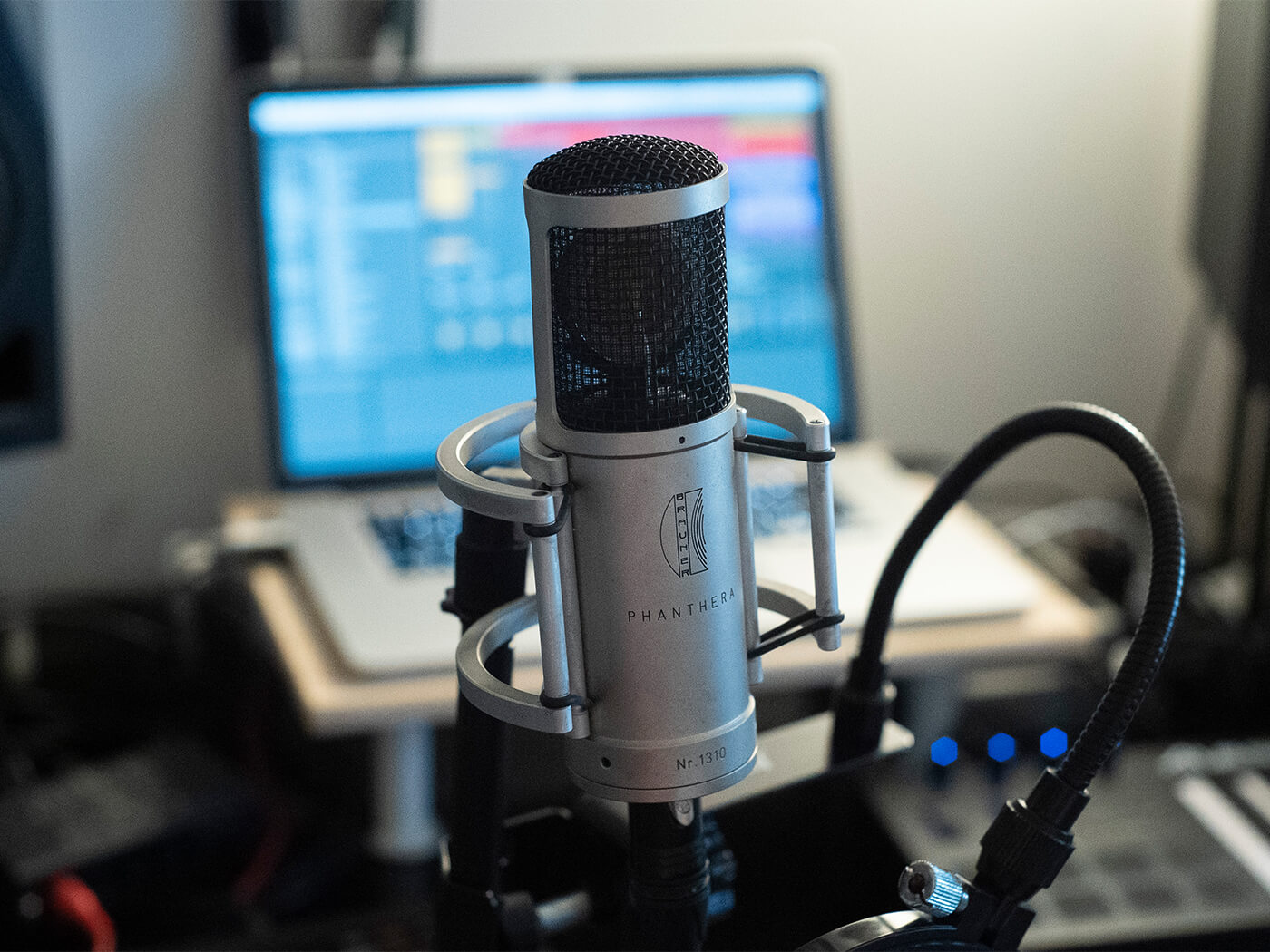 The most expensive piece of equipment I own is probably my Akai VX600. It’s a rare matrix synthesiser Akai made in the late 80s, and I bought it after searching on eBay for years. It’s definitely not as versatile as I’d hoped, but it’s quite unique and can make some cool sounds. It also aesthetically complements the Akai S1000 sampler. Was it worth it? Well, for the same money I could buy myself a fancy new sound card, which I need – but I could make a better piece of music using the VX and my old sound card. That’s the rub. 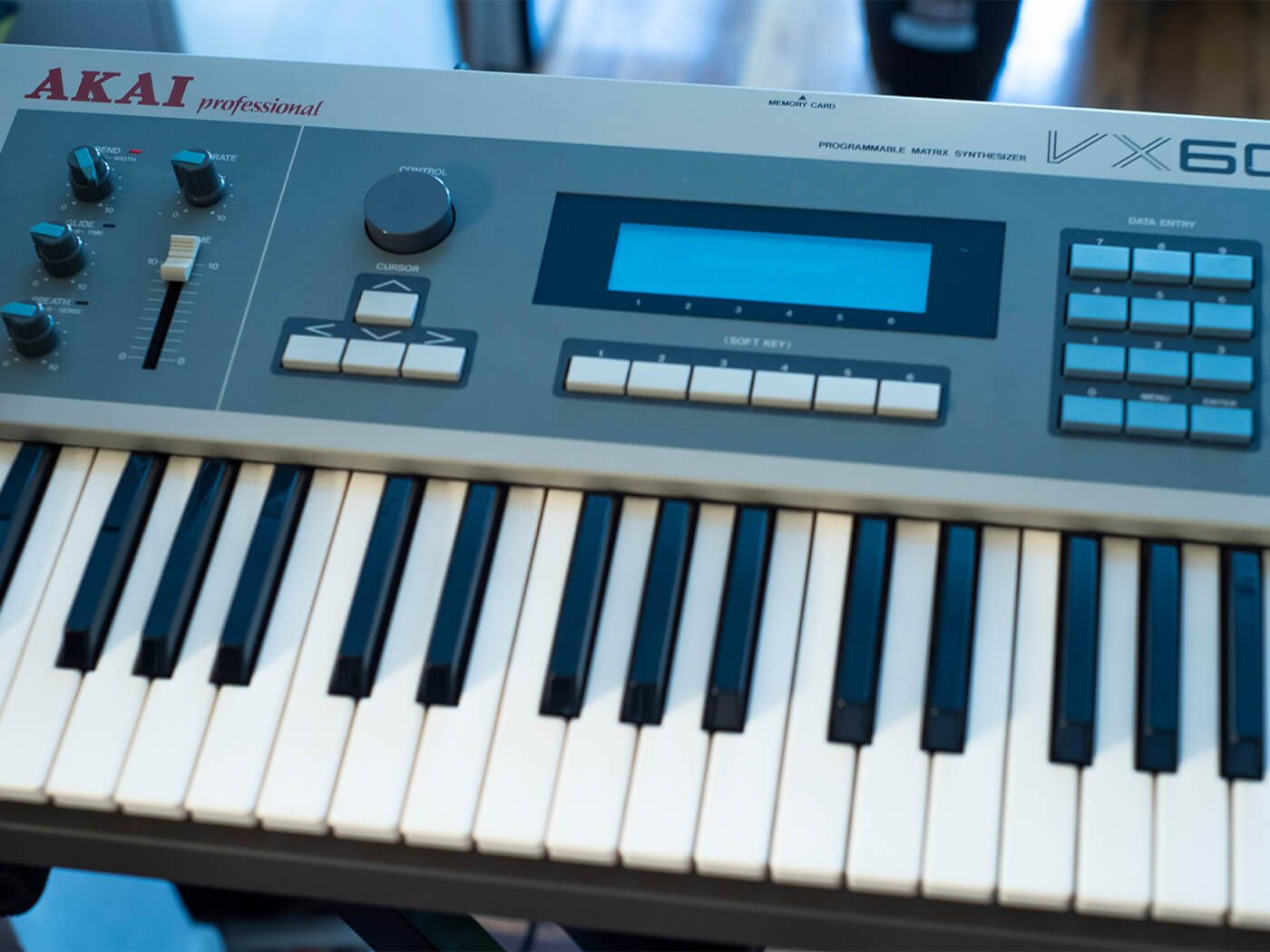 I find a good studio environment inseparable from healthy creativity. I built this setup so nearly everything could be within arm’s reach when I’m sitting in front of the monitors. Everything is patched in, with the most frequently used pieces of kit hardwired to inputs on the soundcard, and I’ve got a patch bay right next to me where I can quickly route stuff to effects. This means I don’t have to crawl around connecting cables when I’m working, which is something I had to do in the past. Speed is important – and the less clutter, the better. 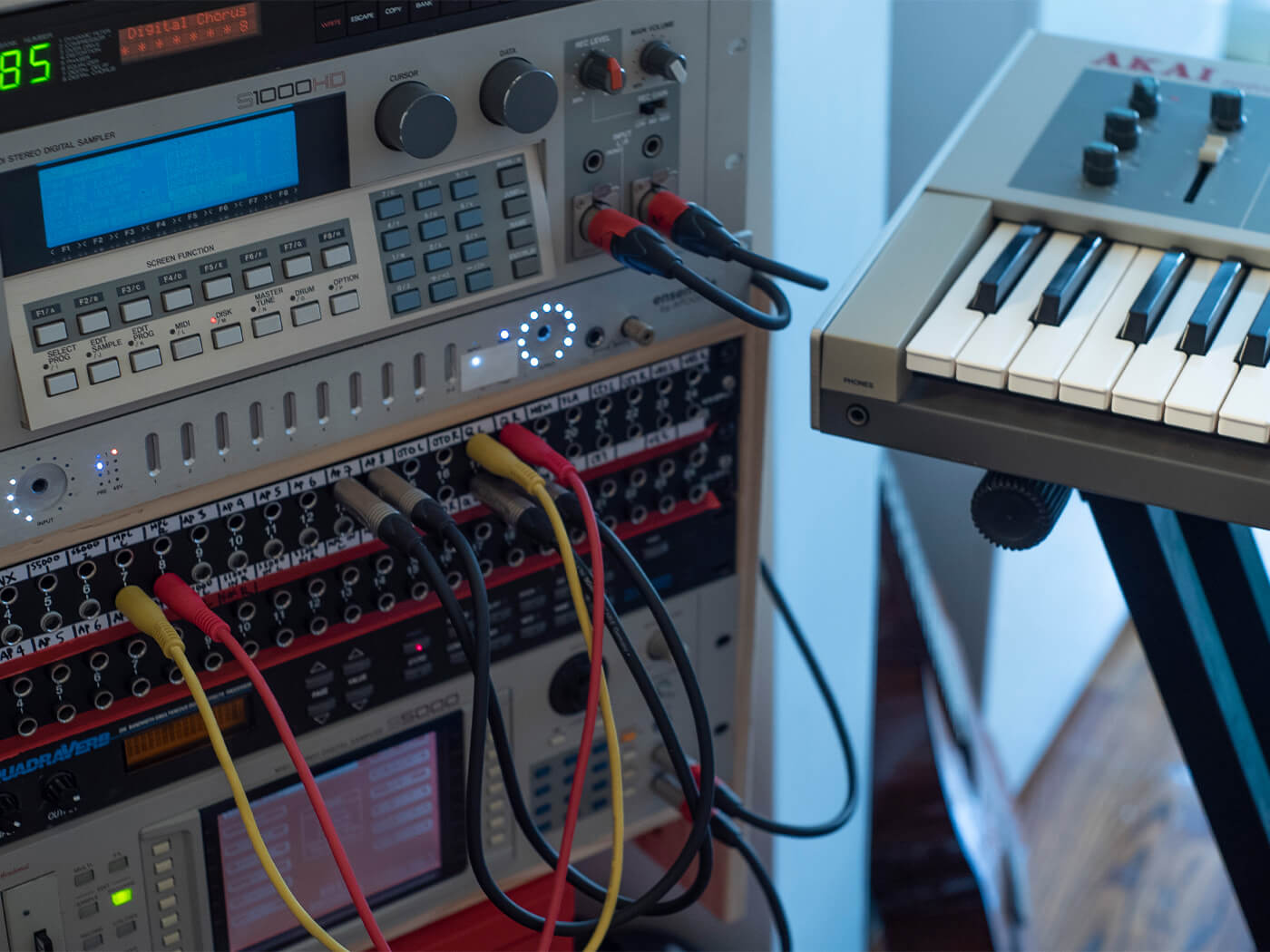 How are you using the different samplers in your setup?

Because this album is a bit of an homage to 90s hip hop and sampling, I thought it made sense to try going back to the source. Whilst the MPC always covers one-shot drum samples, I use the S5000 and 1000 for any longer percussion loops, especially where pitching is necessary, but also for other musical parts that can’t be achieved with a synth. It’s really about experimenting. The S1000 is more ‘coveted’ and does sound great, but I would actually say the S5000 is my favourite. I would often record something between the synths, samplers and effects, bouncing stuff between them until I found a cool sound, which could then be spread across the keyboard, or modulated in weird ways. There’s also the added bonus that, with everything connected via MIDI, you can accidentally send MIDI intended for one part to something completely different. This definitely happened on a few occasions – something completely unintended which made it into the finished track. 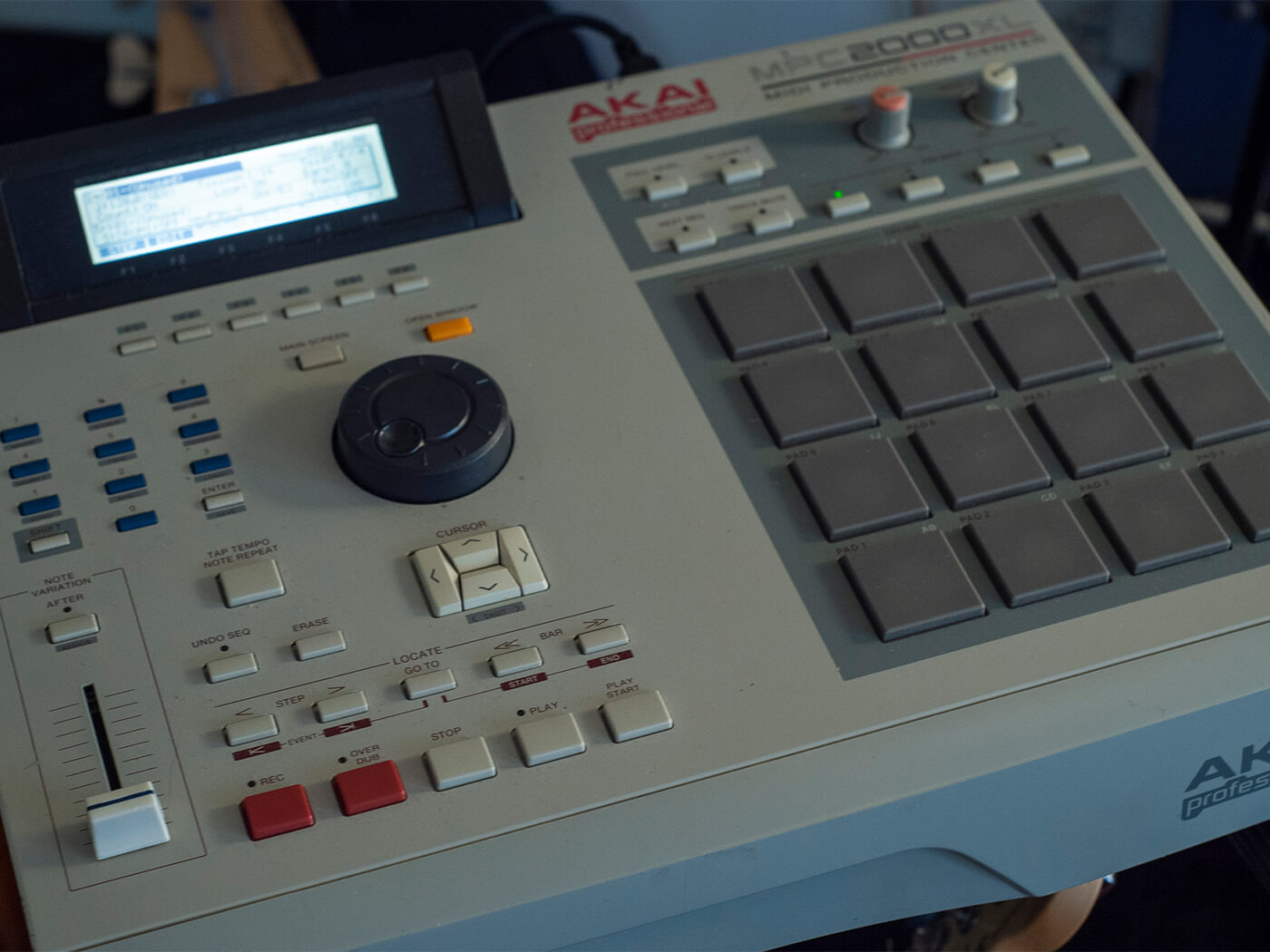 The most dependable and oft-used piece of gear in my setup right now is the Moog Source. It’s not a Minimoog, and it definitely can’t do everything, but it’s just a super solid bass and lead synth. On several occasions, I spent hours making a sound on a fancier synth in a studio before just returning to the Source. It’s a lovely instrument. 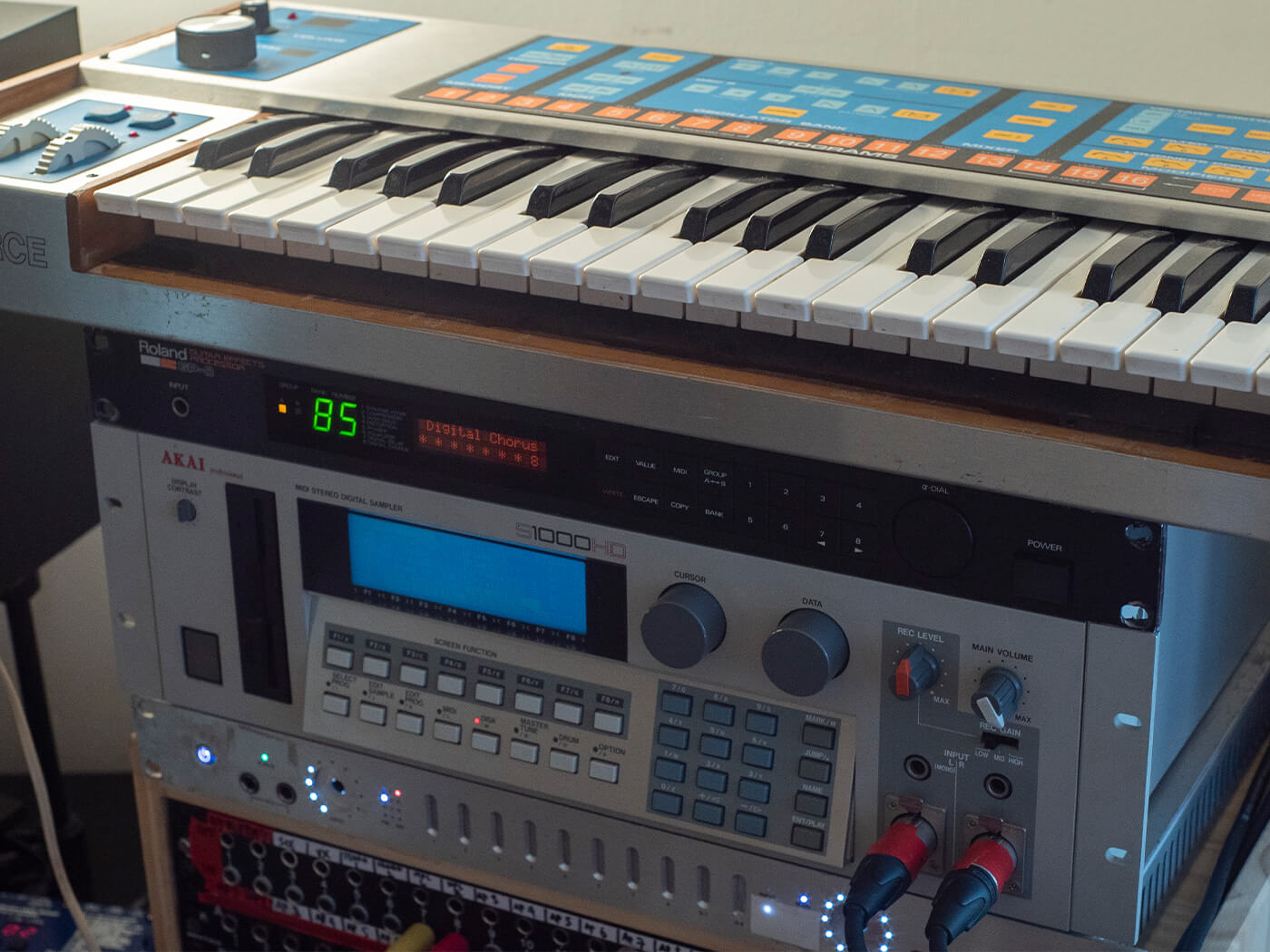 Which instrument or effect can be heard most on the album’s single, Prisoner of Love?

I guess the most prominent instrument is the upright piano, which is slightly out of tune and was recorded with a single stereo Royer ribbon mic. Apart from that, it would be the bass – which is a Minimoog played by hand. In terms of effects, there’s a lot of atmospheric background reverbs from the OTO Bam – not really noticeable until they aren’t there, but they help the track a lot.

It sounds like there’s a huge 80s influence in your sound. How does your gear help you achieve this?

It’s interesting because I don’t feel the 80s have specifically influenced my sound. If anything, I’ve been influenced by artists who themselves are influenced by the 80s, such as Daft Punk or Breakbot. On this latest album, I’ve been looking more towards sounds from the late 70s or 90s. But I definitely use a lot of equipment that was built in the 80s, and I understand that these synth sounds bring that association for many people. Using original pieces of equipment definitely helps achieve the sounds from these eras, and I spent a lot of time studying the bass sounds from my favourite funk and disco tracks. 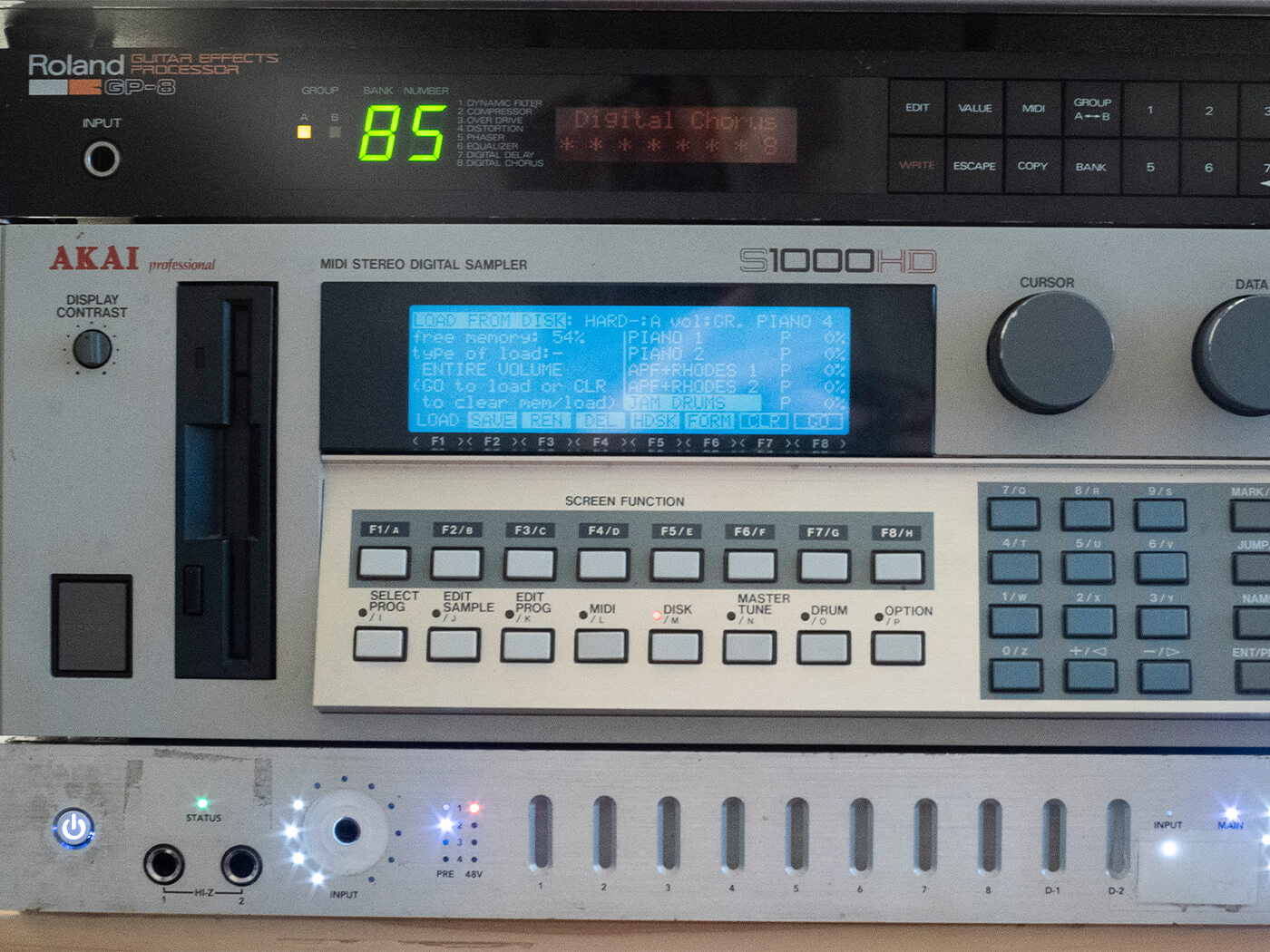 It’s not very exciting, but I need a new sound card! I’ve been using an older Apogee Ensemble, but the drivers aren’t supported by most recent versions of macOS and it doesn’t work that well with the newest Logic or Ableton either. I’m thinking about getting a Universal Audio Apollo when I can afford it. UA, if you’re listening – let’s talk.

I think I may have gone so far out-the-box that I’m ready to go back in the box, at least a bit. Working with the samplers and the MPC can be very slow, and whilst this was absolutely the point, I now feel like I can streamline a bit more. That’s partially why I’m familiarising myself more with Ableton Live. I’m hoping I can now integrate that into my existing setup, and get the best of all worlds. 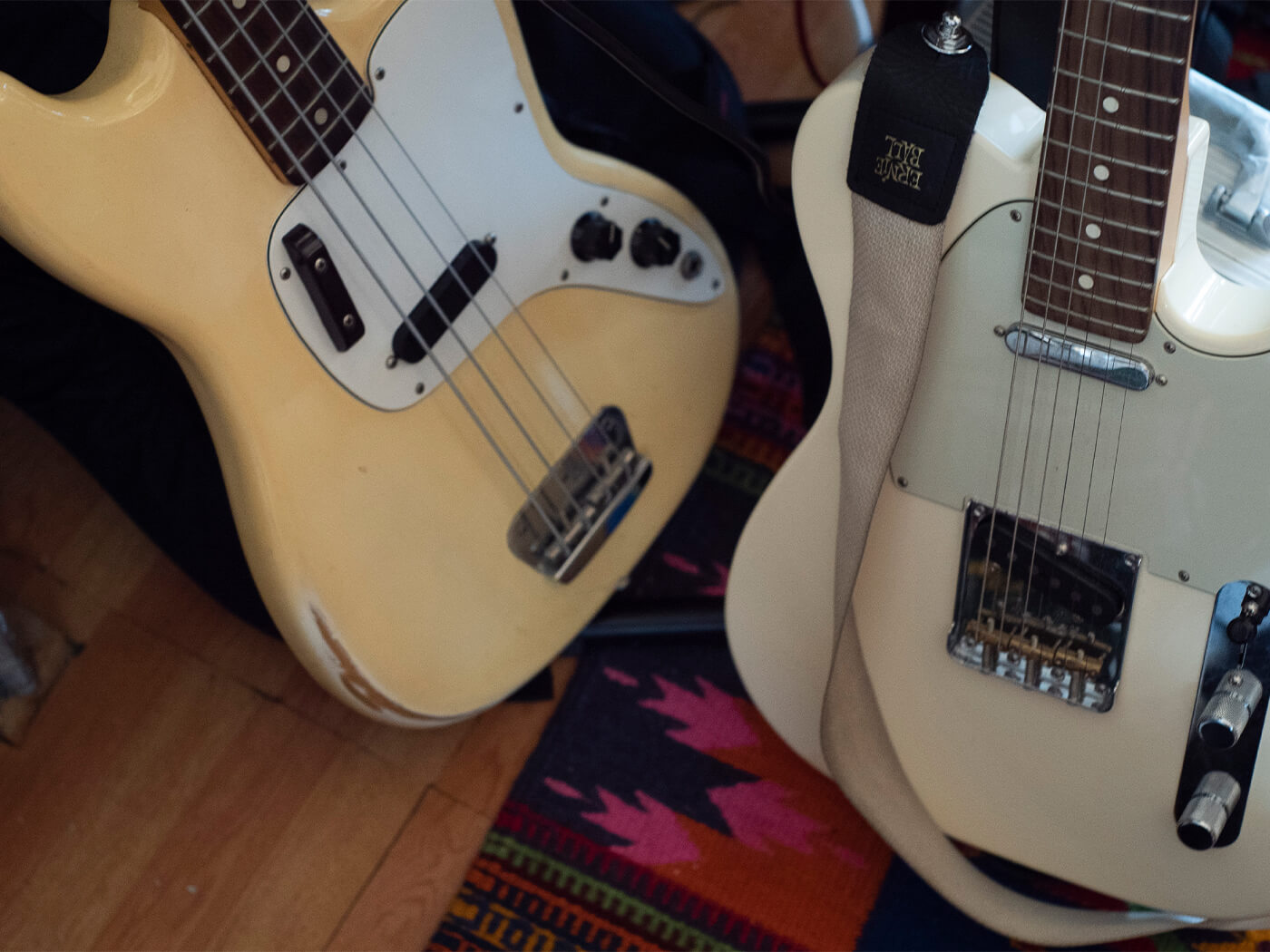 I would love a Memorymoog synth. They can pretty much cater for any synth sound you need, so it’s a great studio asset – although nothing sounds like a Yamaha CS60/80. However, they are now ludicrously overpriced, so I doubt I’ll ever own one.

The sounds and samples you use are much more important than whatever effects you add to them later. If you spend time finding great sounds, whether that’s rooting through sample packs for drums or really taking time to craft a decent synth patch, then most of the work is done. After that, familiarising yourself with EQing and compression is the next step, but really it’s all about the sounds.

Start with decent monitoring. There’s no point trying to produce tracks when you can’t really hear what’s going on, so invest in some monitors and good isolation stands and learn how to properly set them up.

Do you use a studio that we all need to see? Send photos to editors@musictech.net and your gear could be featured next.