The DAWless jammer lets us into his Brighton studio and talks tape machines, Instagram, and why he doesn’t want his sampler to receive email. 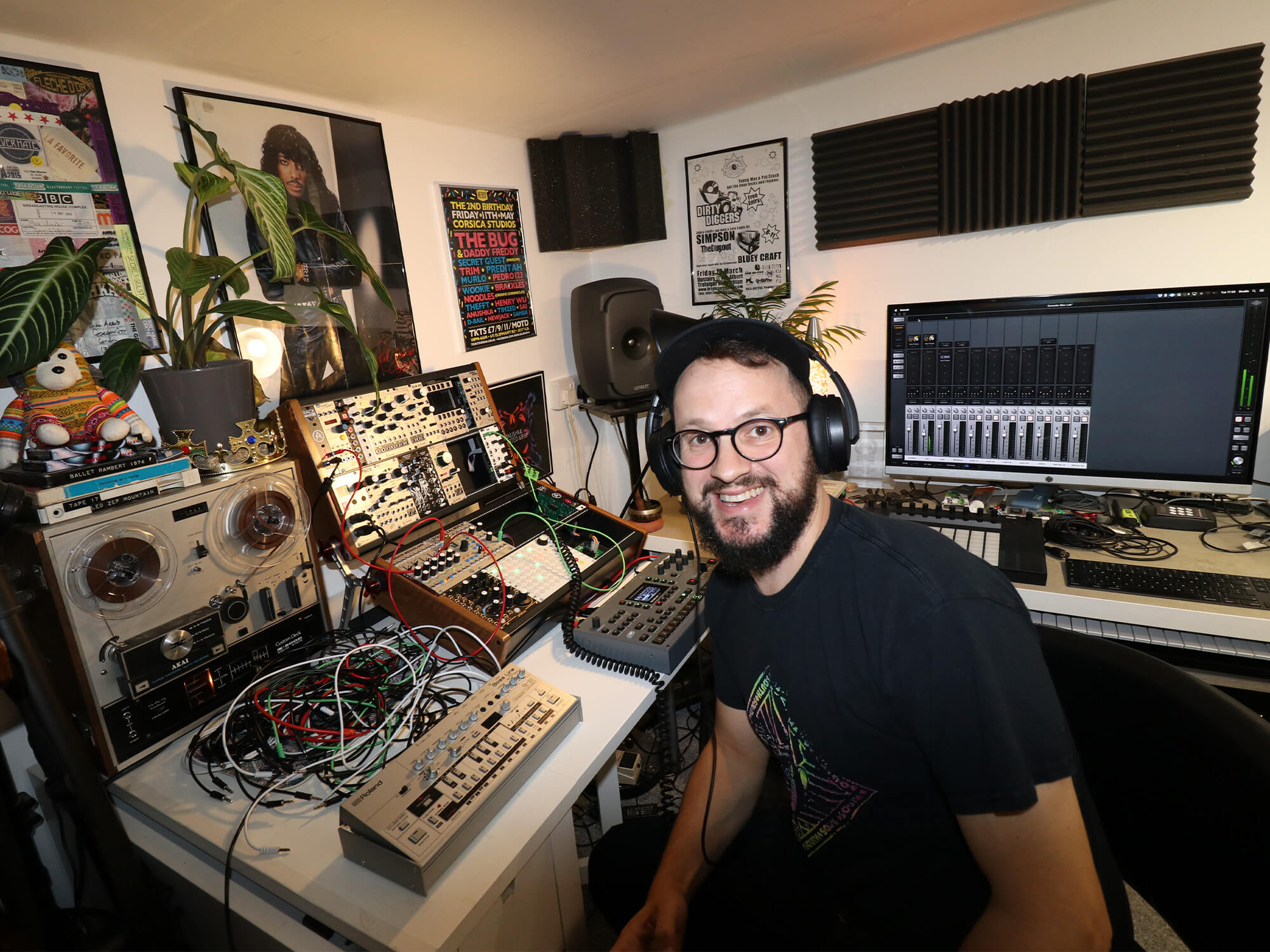 If you’re active on Instagram and have a close eye on the synth community, you’ve probably come across Max Wheeler’s videos already. The Brighton-based producer uploads clips of his DAWless jams on the platform, cleverly weaving elements from his modular setup and found sounds, processed through an Elektron Octatrack or Teenage Engineering OP-1. His tinkerings have caught the attention of Gilles Peterson, Throwing Snow, Lunakai and more, already.

His main project, though, is Anushka. Working with Victoria Port, the duo’s concoctions have been touted as “vocal bass music from the future”, fusing jazz, electronica and neo-soul. We head to Max’s home studio to learn the techniques he employed to create Anushka’s Yemaya, and why a 70s reel-to-reel tape machine is “part of the family”. He also offers some tips for creating content for socials.

Hey Max! Loving the new Anushka album, Yemaya. Can you give us a bit of background on it?

It was about four years of work, production-wise. Some tracks started as beats, some as Victoria’s songs which I fed through synths and stuff. Quite a few tracks started life as ideas on the TE OP-1. Ultimately, it’s a continuation of the process we’ve always had, which is to bounce stuff around. Victoria was heavily involved production-wise, especially in terms of the vocal sound. I tried to step up my instrumental playing a bit this time. Hopefully, it’s a progression.

You’ve channelled a lot of different styles and artists in the production. How do these ideas start?

I’m always listening to loads of stuff. With Anushka, it’s very much a back and forth with Victoria in terms of what she’s feeling and what’s inspiring her to write. I’ve been producing, and I’ve been teaching youth projects, young offenders, mentoring young producers and music leaders – that all feeds into my process. I’m constantly getting my head around new styles that young people are interested in. You can hear some sort of oblique drill influences which came from working in prisons and getting deep into that sound to help people learn how to make it. 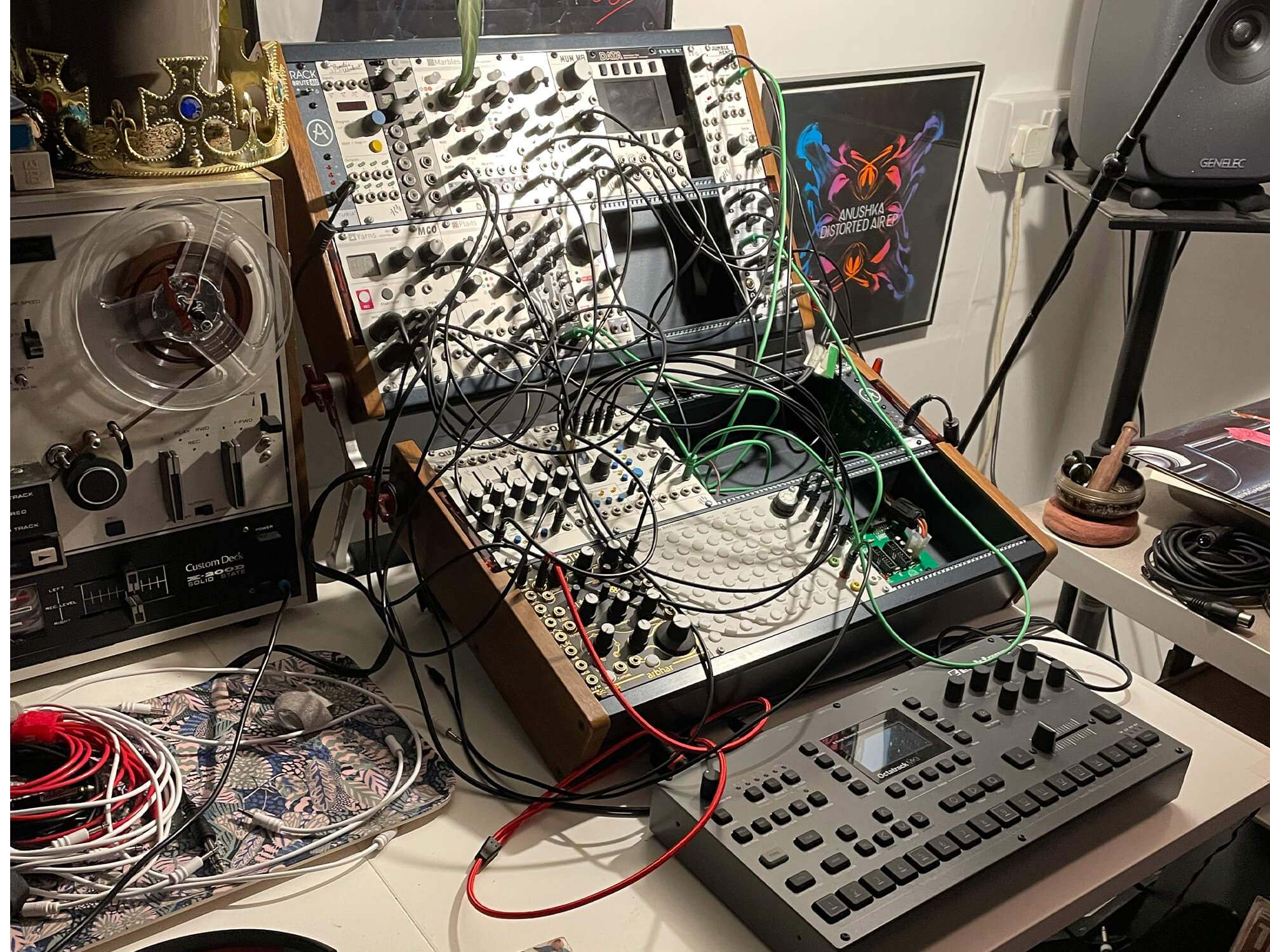 How do you decide which beats make it into the Anushka project?

It’s purely down to which ones spark something. It’s a very different process to writing instrumental stuff. A lot of the time, something I think is a throwaway track turns out to be something special when the vocal is matched to it.

Tell us a bit about the studio, Max.

I’m in Brighton and have been living here for about 15 years on and off. I love it. It’s a great, small city with an amazing scene, loads of music and quite a nurturing environment for new sounds and micro-scenes. I love that. 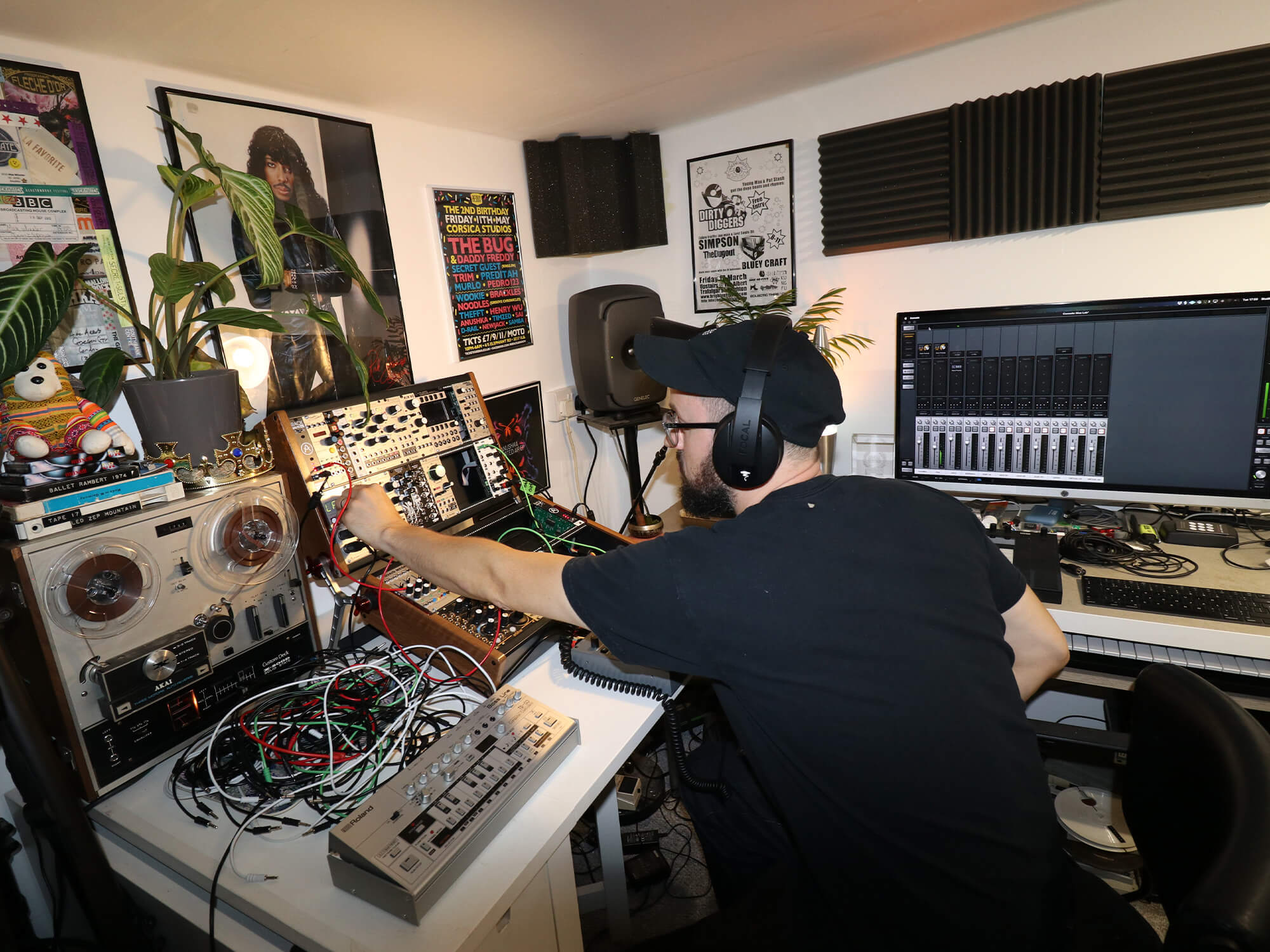 Most of my work is done here apart from bits on the OP-1 and laptop when I’m travelling. I mix everything here and know the space well. I have the layout exactly how I want it after years of trying to tweak the ergonomics. At the moment, the Octatrack is at the heart of it, synced to the modular. I’m definitely in a pure hardware phase. 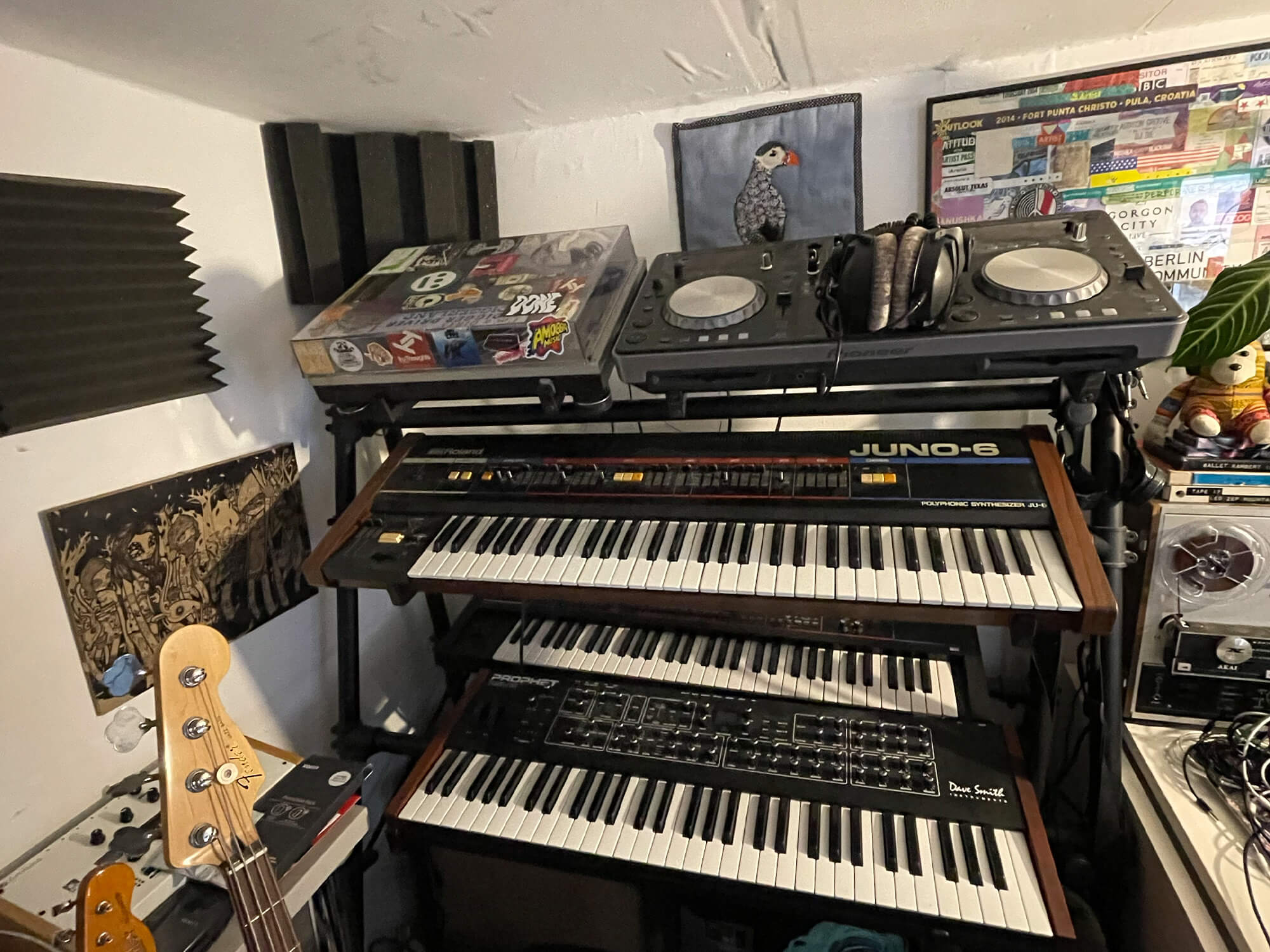 Fun and creative. I like to have stuff set up, so it’s easy to use without loads of faffing, so if we want to try something, it’s easy. It’s also about not being precious or having too much of a preconceived plan and just going where the vibe wants to go.

That’s only happened since lockdown. I used the Akai MPC 4000 a lot when I started out and on some of the earlier Anushka tracks. I missed that DAWless workflow, so I got the Octatrack with the advance money for the new record. My modular rig is a sort of mind-bending extension of that, and recording it onto my Dad’s old reel-to-reel completes the hardware-only workflow. 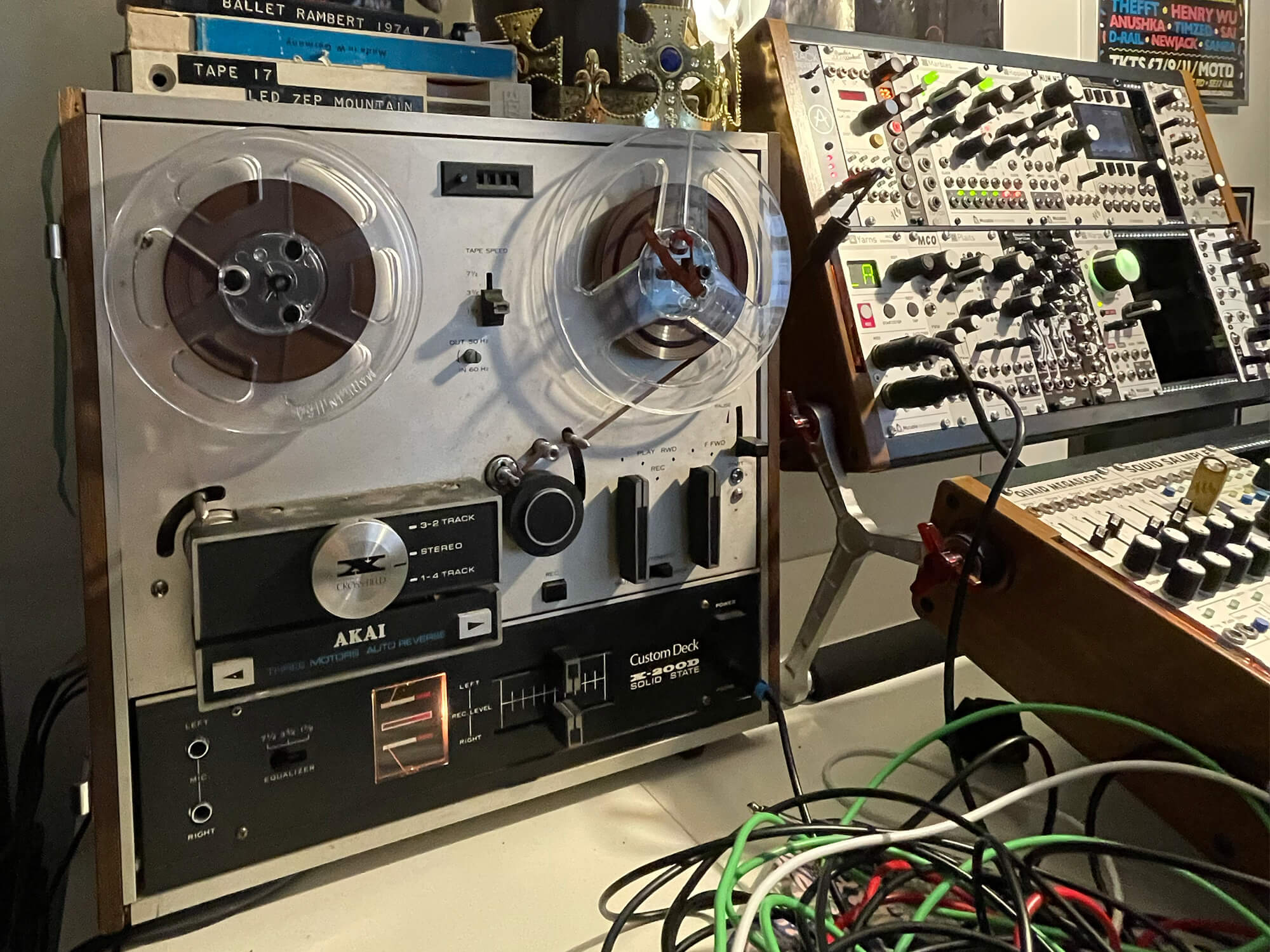 Can you tell us about your tape machine?

It’s my Dads from the 70s, and I have this deep love for it. It’s temperamental, awkward to use, occasionally produces totally unusable recordings and all of that makes me love it more. It’s the opposite of the digital, anything-is-possible DAW world, and that’s what I need sometimes. I heard James Blake say that they don’t allow anything on stage that can have other apps on it, and I’m feeling that. I don’t want my sampler to receive email.

What’s in your modular rig, and how do you integrate it into your workflow?

It’s rapidly gotten pretty stupid. The idea was for it to centre around granular synthesis with the Arbhar and Beads (which only just arrived due to the chip shortages). It’s all clocked through Yarns, which is how it talks to the Octatrack and the rest of the studio. Drums are from the Squid Salmple and Sounds from Plaits, Basilimus and the MCO. My favourite parts are the filters, Mumm8 & Ripples, and then overdriving stuff through the Jumble Henge and SBG.

I love the chaos and the impermanence of it. I build something, maybe record it on tape and then it’s gone. No stems, no projects. It’s teaching me to move away from the product creation obsession I’ve always had. I’ve been releasing records on indie labels since my early 20s and have always had a project on the go. This is the opposite – just creation for its own sake.

Got to be the reel-to-reel. It’s part of the family. 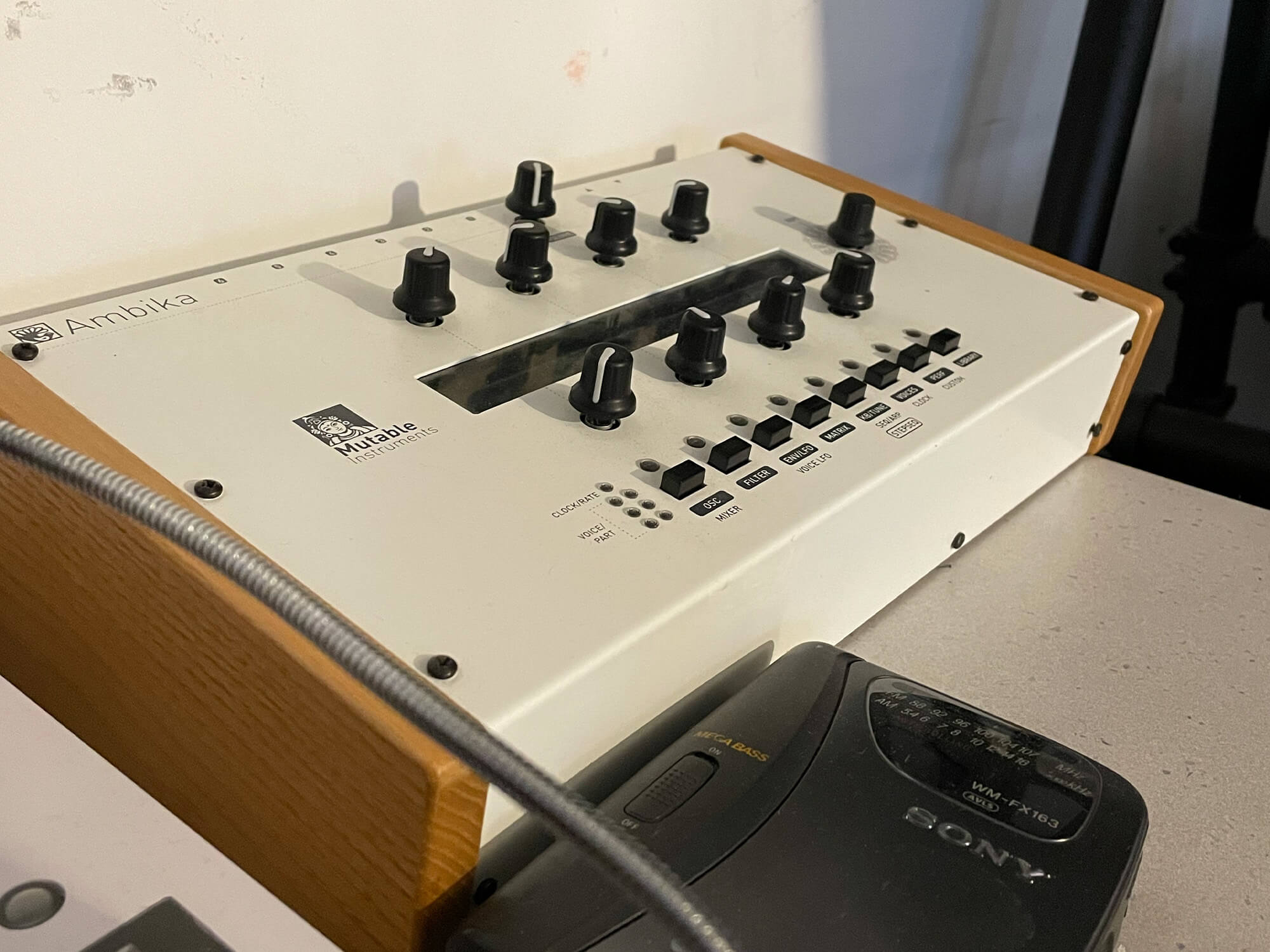 Is there a particular synth or effect that can be heard the most on the release?

On the Anushka album, it’s probably the Prophet Rev 2. That defines that album in my head, gear-wise. It’s an amazing synth and does that astral arpeggiated thing well.

Probably the new Genelec Monitors. And yeah, they are mind-blowingly good. I will be paying for them for a long time. 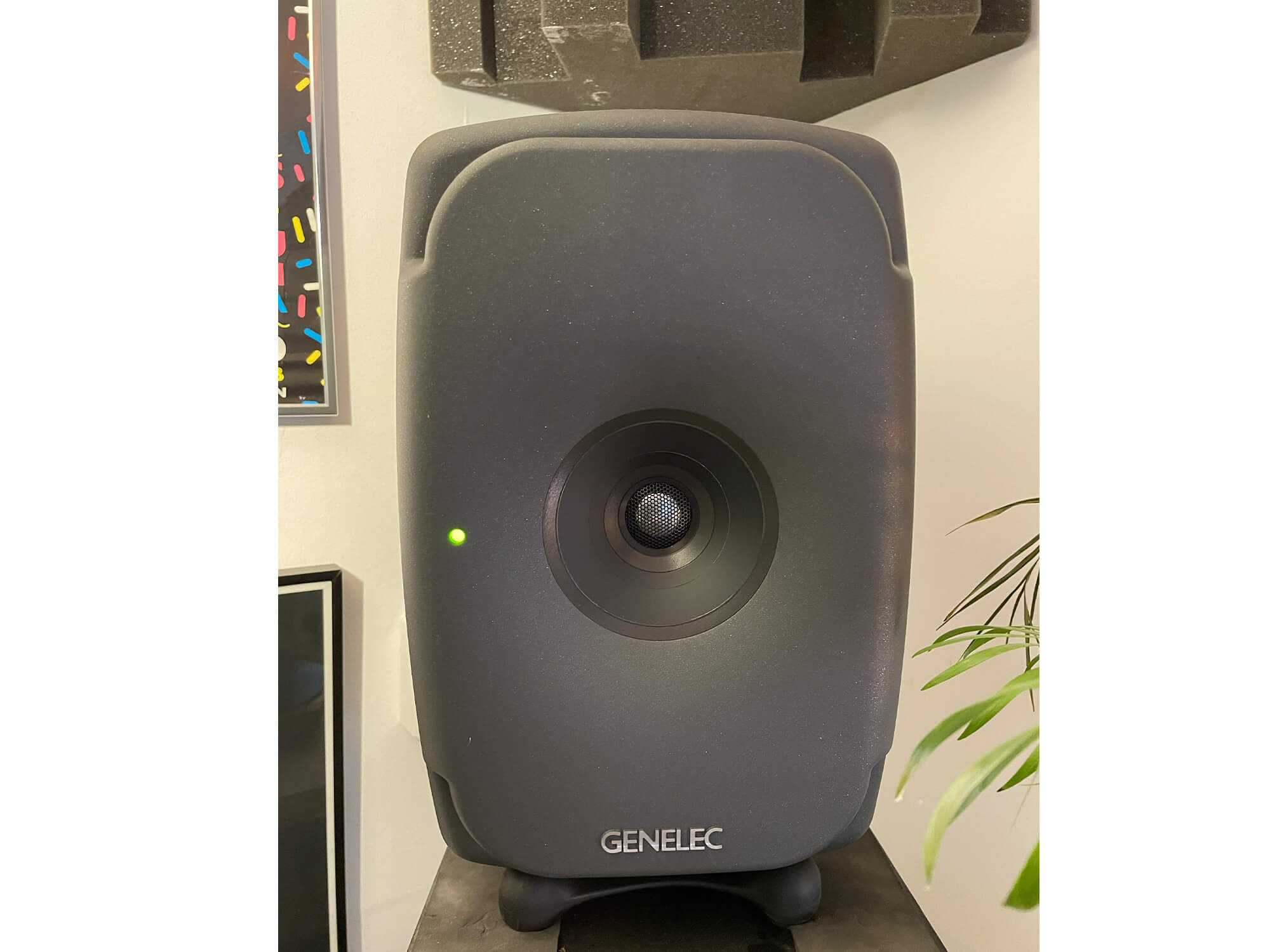 There’s a tracker-based sequencer for the modular called Nerdseq I’m thinking about to help write melodic stuff on there. I’m not allowed any more gear ever again, though.

It’s the first one you fall in love with. Probably the old MPC 4000 for me. I love the Octatrack because it takes me back to the same creative place but is integrated a bit better with a modern studio.

Probably a Fender Rhodes, the old suitcase one. I could listen to that sound for a long time. Am I allowed a tape delay to run it through? 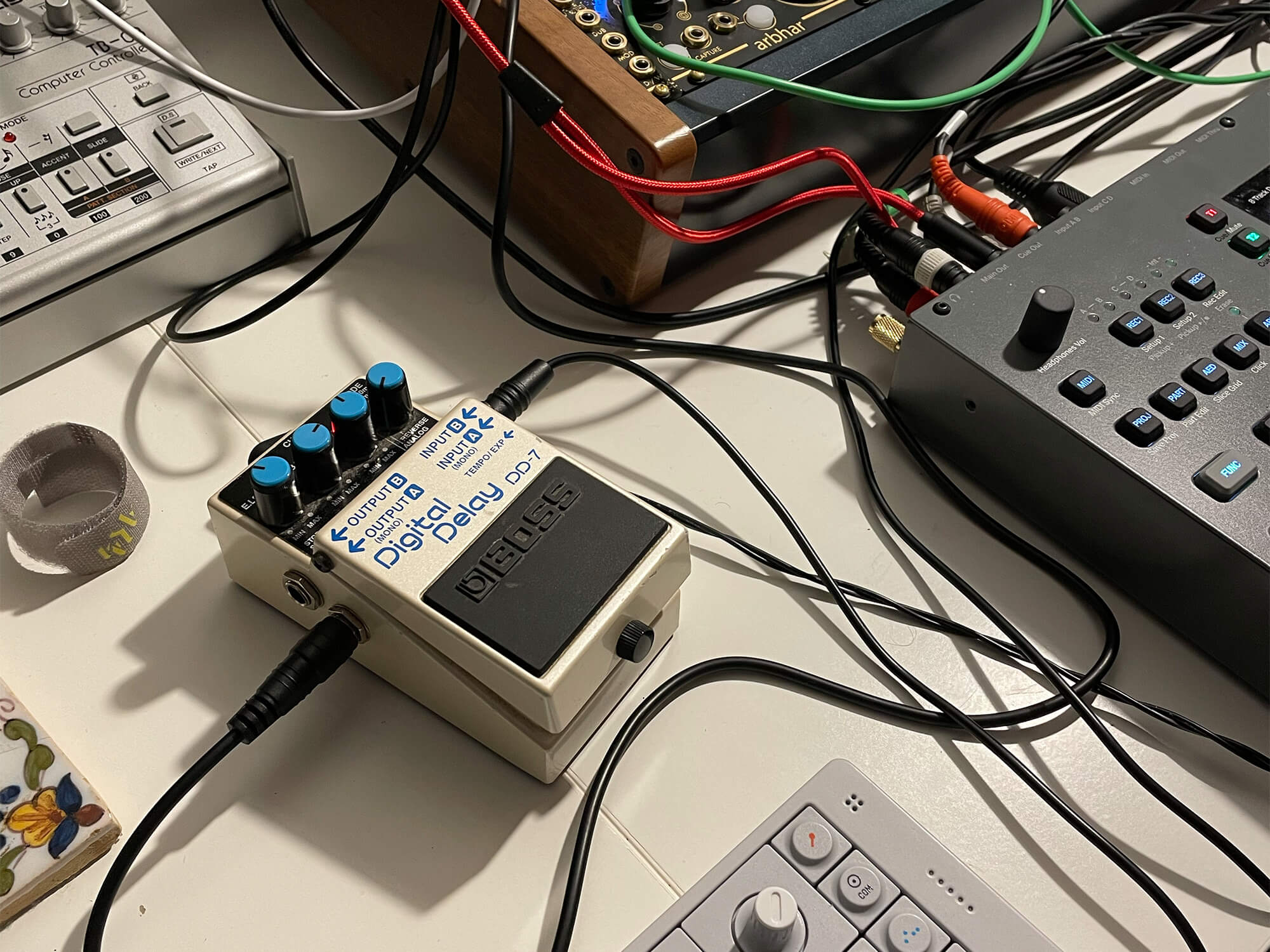 You’ve built a bit of an engaged following on Instagram in the last year. Has it impacted your career much or the way you make music?

It’s nice to be able to get immediate feedback on stuff and connect with people. I’ve always created these kinds of little sketches, but only the ones that make it onto records ever got heard. I hope sharing the process helps me make better records by being a bit more keyed into what stuff people are feeling. Big up everyone who’s checking the stuff out – I appreciate it!

Learn to DJ early on. And also learn about subtractive EQ early on.

Do you have any advice for producers looking to make engaging content on social media?

Get into a consistent routine and make stuff that you enjoy the process of. That’s all I’m trying to do – document a bit of the fun process. It’s amazing that people are interested, to be honest.

Spend some time sorting out the space. If you put it all in and don’t think about the ergonomics, you might not change how it’s set up for ages, which will affect how creative you are. Even when it’s just a laptop and speakers, is it in the right place? Can you put some acoustic treatment up? Is there a nice view at that angle? Those little things are really the big things. Also, buy a plant. Oxygen gang. 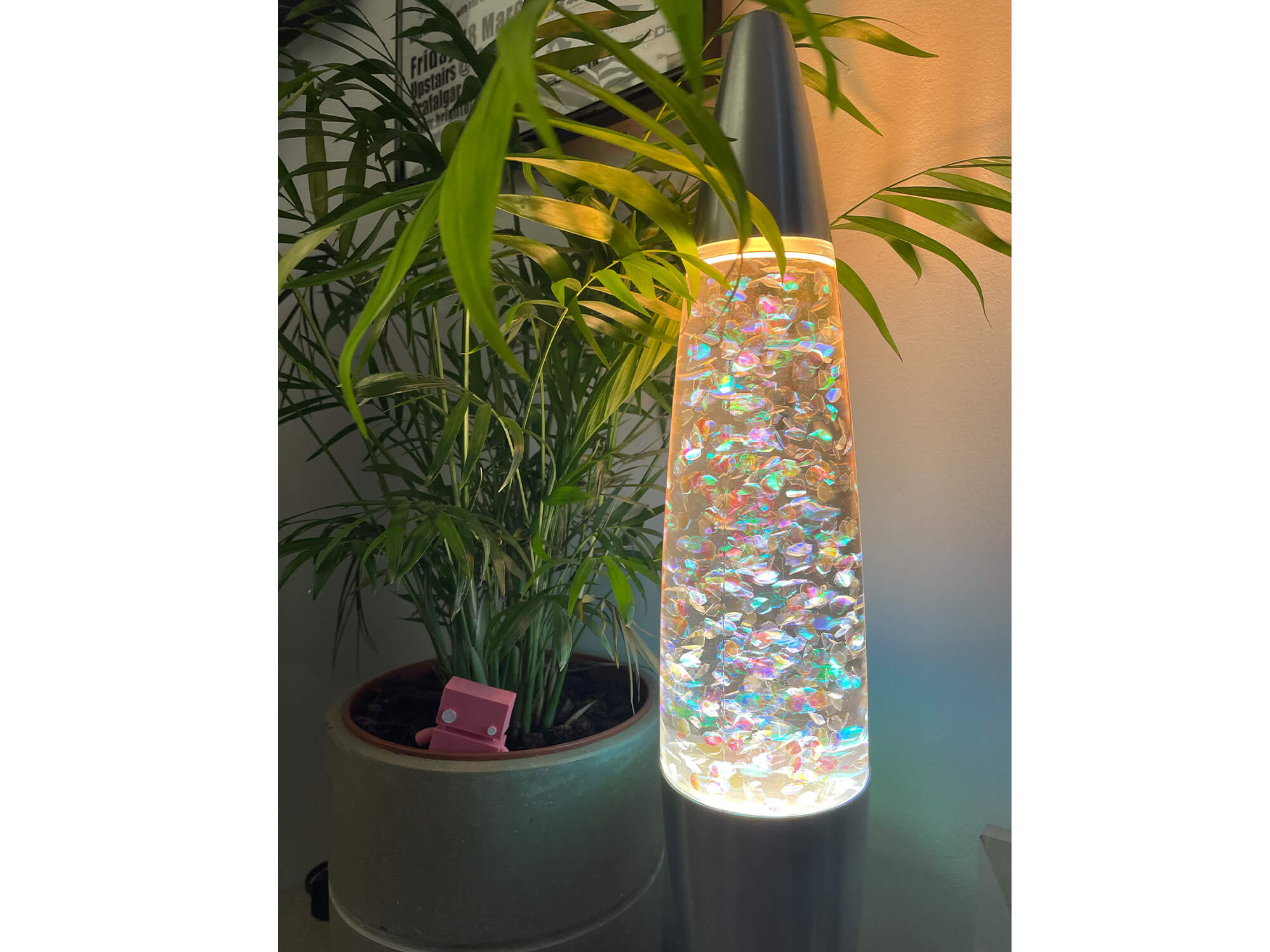