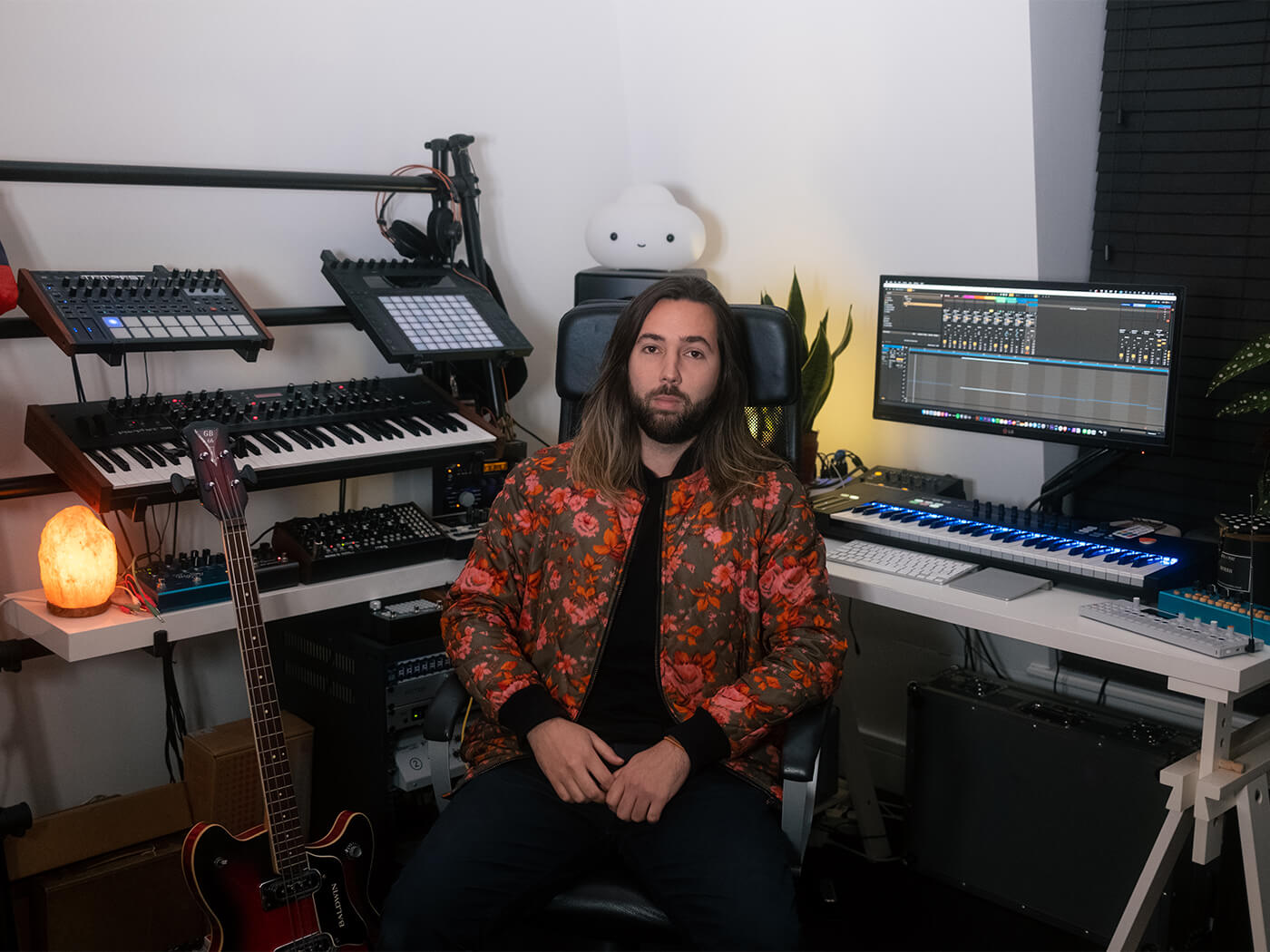 His debut EP is dropping imminently, but Lunakai is no newbie to music technology. Kyle Ross, now known as Lunakai, has worked on music for Yussef Dayes and Ashnikko and has produced records for Diplo and Robyn collaborator, Maluca. Among his other musical endeavours, he’s also worked on compositions for Nike and Adidas TV spots. Now he’s gearing up for the release of his self-titled debut EP with the elegant and mellow ALL IN, with a spot on the revered Majestic Casual channel. In this Show Off Your Studio, he shows us around his working-from-home space and tells us why it’s important to make as much music as you possibly can. 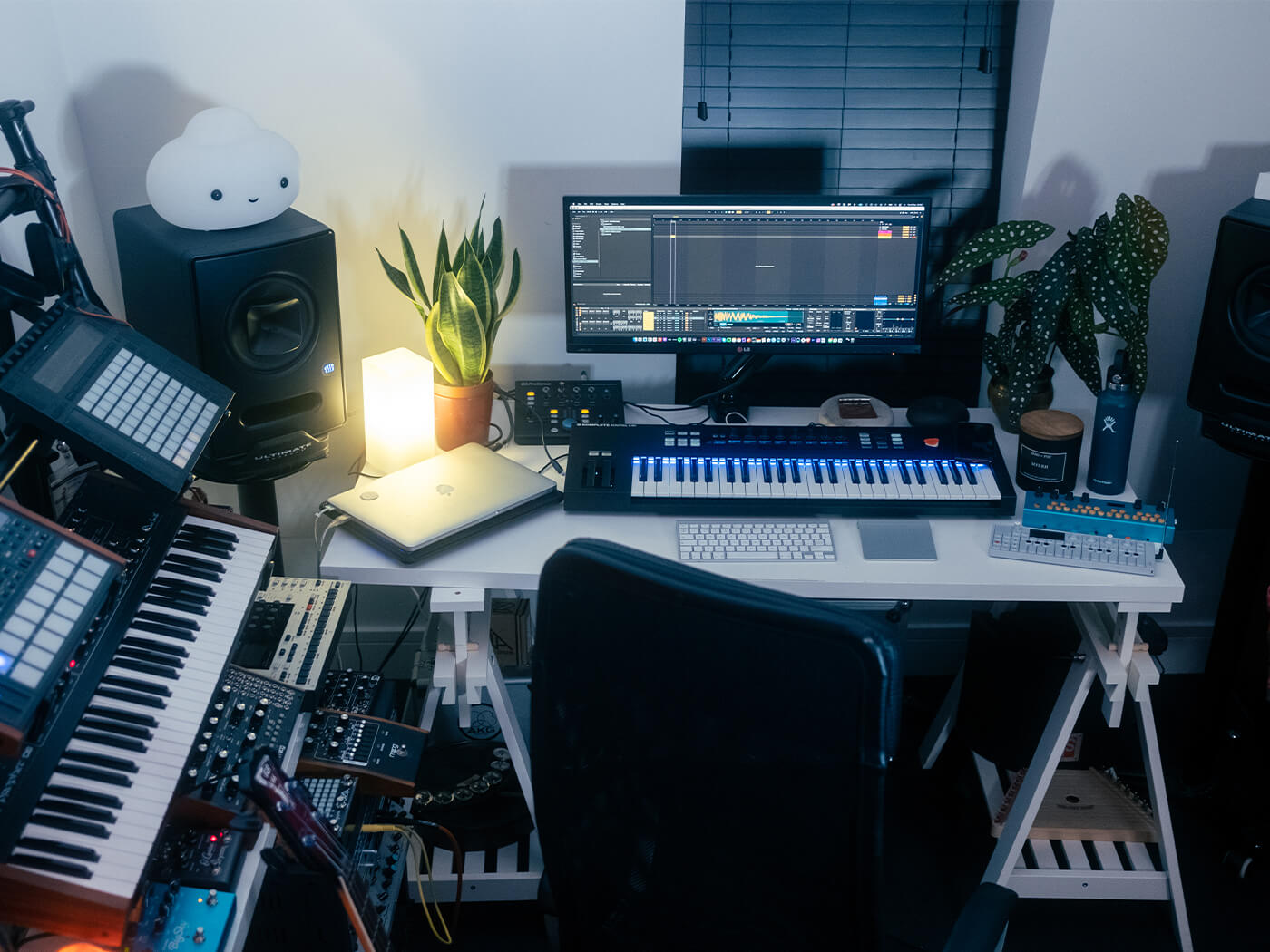 Tell us a bit about the studio, Lunakai.

My studio is a home studio set-up in Clapton, East London. After having a separate studio for a while at 123 Studios, run by the wonderful Brett Shaw, I realise now that I prefer working from home. My studio is more elaborate, but I find that I’m often most inspired working in odd environments or whilst travelling with just headphones, a laptop and a MIDI controller.

I use my analogue synths, guitars and instruments that I have collected as much as I can when working from my studio so that I have a ton of interesting parts to manipulate when I’m working away from my studio. A big part of my sound is resampling and building weird sampler instruments from sounds I’ve recorded, be that a synth, a guitar, or foley and found sounds I’ve recorded whilst travelling. 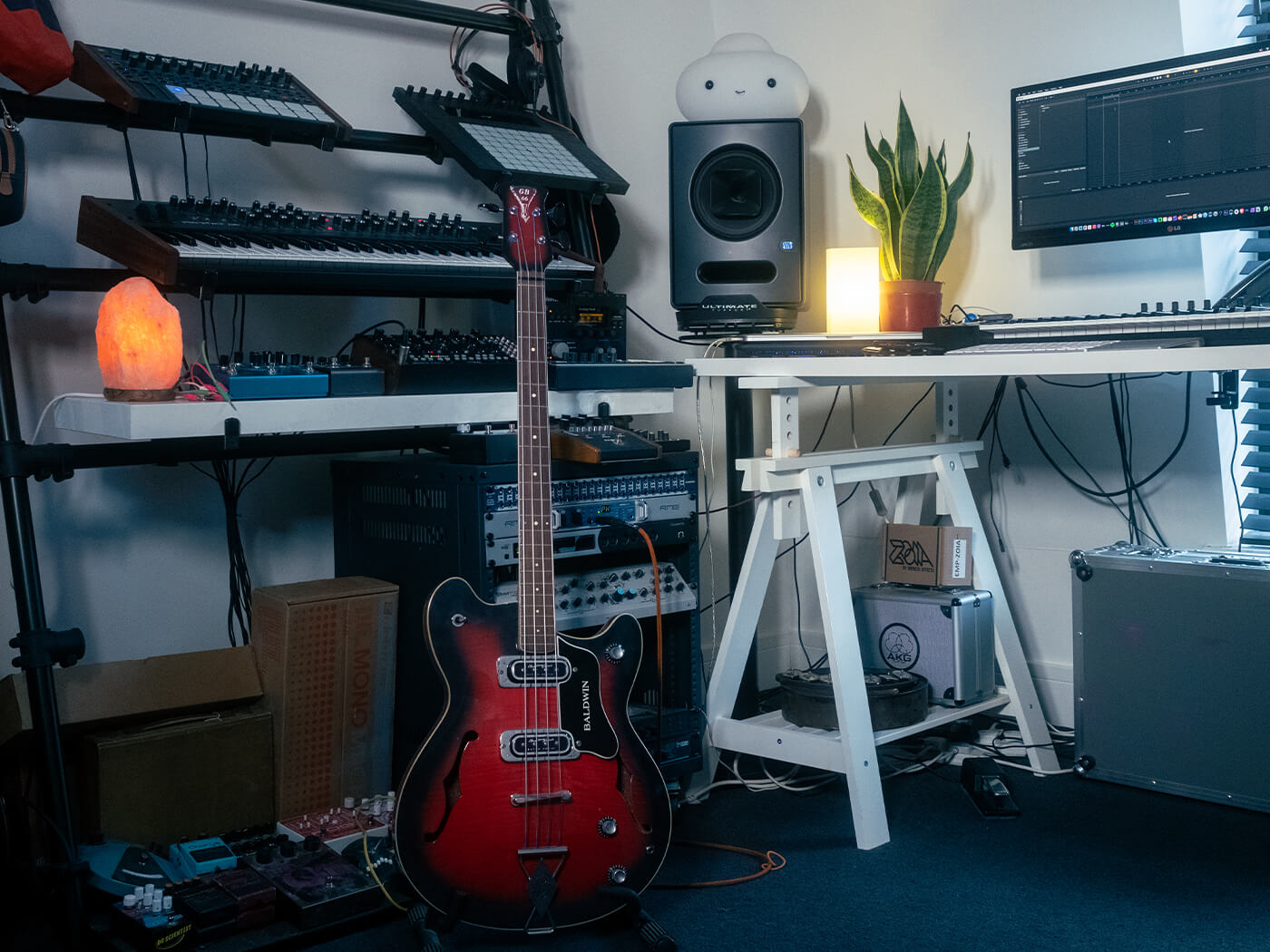 I primarily use Ableton Live. I love its Clip Mode for starting ideas because I can mix and match parts before committing to the arrangement and structuring a tune. I also love how quick and fun it is to manipulate audio – not to mention all the great Max for Live plug-ins that give you unexpected results. I tend to use Logic Pro X to do final mixes, mostly because it’s nice to separate the processes. I’m also hearing great things about Bitwig now, too. Its modular environment looks amazing, so I’ll be giving that a try next. 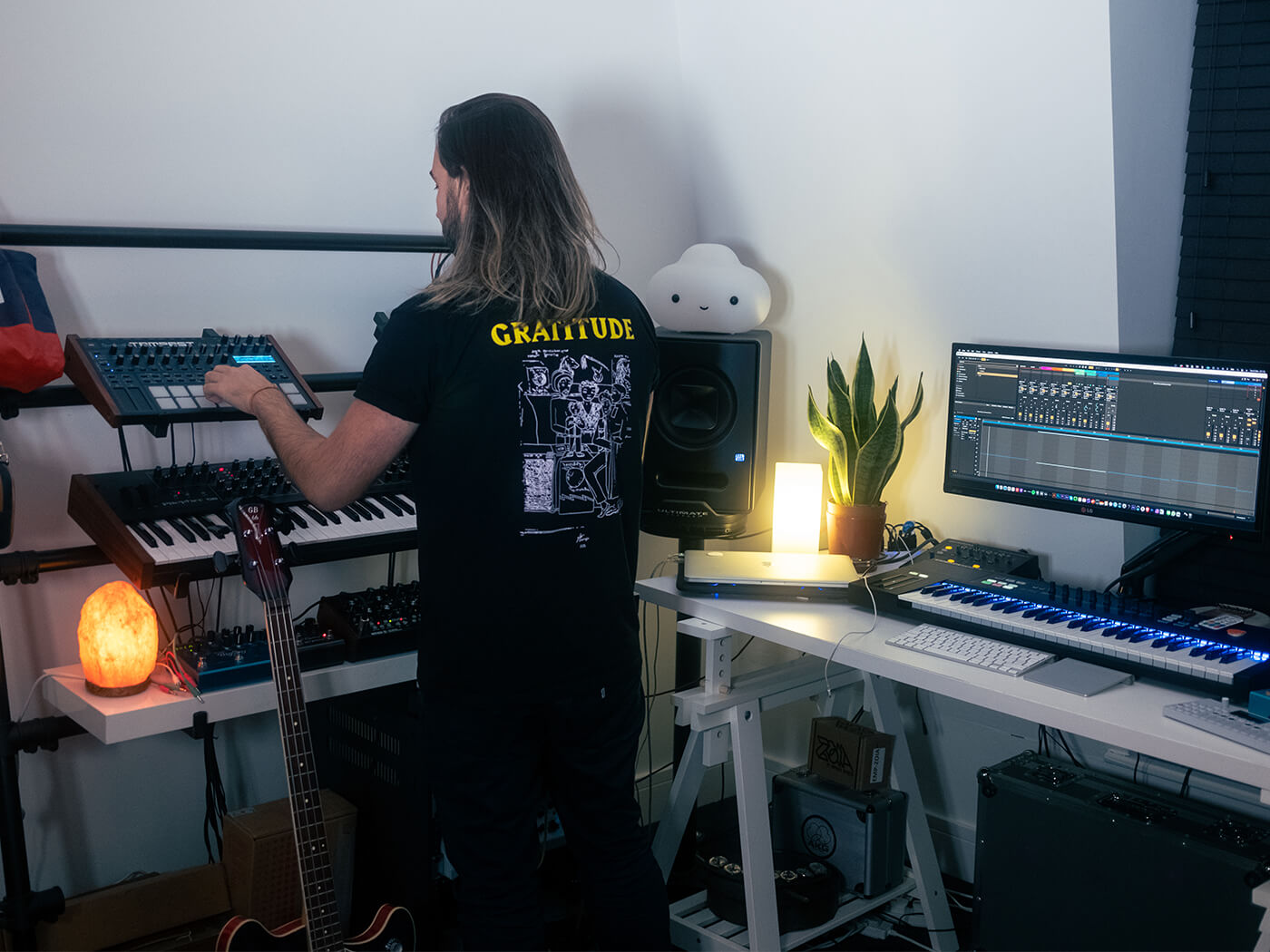 I try to keep a relaxed and at-home environment. I think the best music, especially when working with other people, comes from being in a place that doesn’t feel like work. I find real studios too clinical. I love the idea of working out of Airbnb’s to set up those amazing environments to create in. Studio essentials for the vibe include candles, incense, plants, good lighting. Oh, and good snacks. 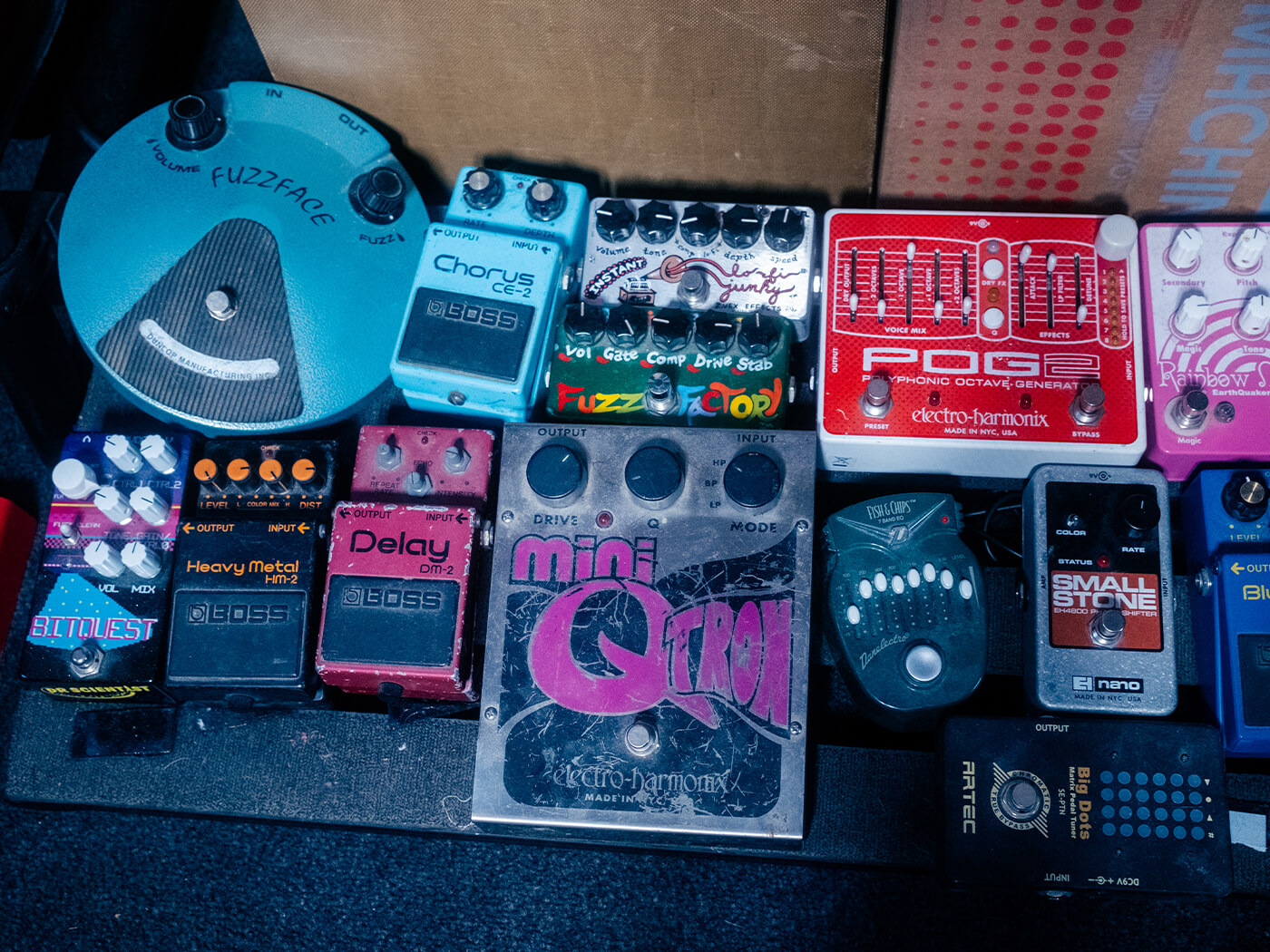 What a difficult question! I’d have to say either my laptop & Ableton Live paired with a field mic recorder. Or, if I really have to pick one specific item, it would be my 1960’s vintage Baldwin Bass. The thing is just magic, it has flat-wound strings on it and has an instant 60s psych tone to it.

What are the rules here? Do I have electricity? If I do, it would have to be my Teenage Engineering OP-1. If I don’t, it would be my Spanish acoustic guitar. I can imagine lying on the sand playing the guitar and coming up with song ideas that I’d never be able to record or show anyone. Bittersweet. 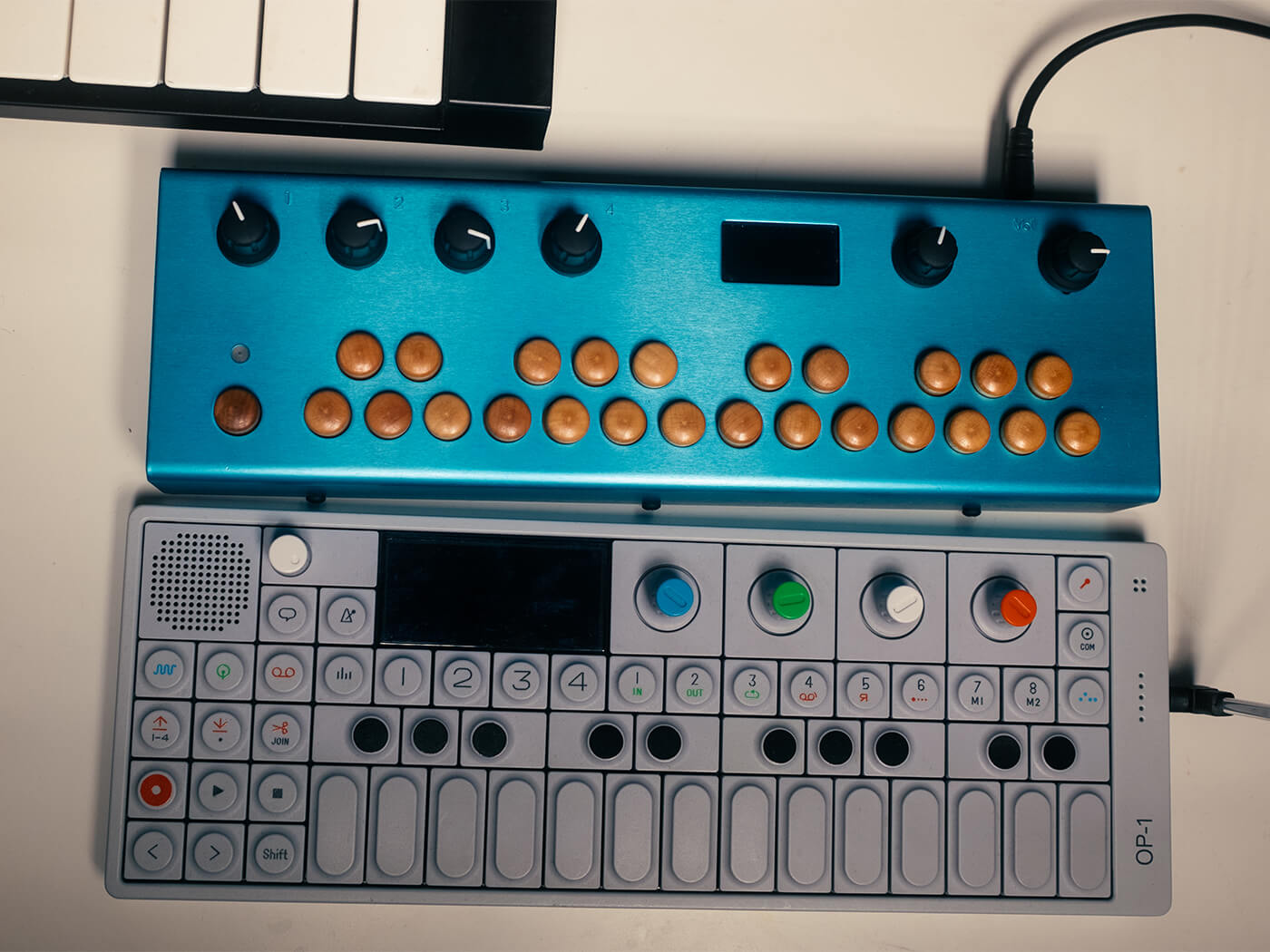 What synth or effect can be heard the most on your new LUNAKAI EP?

You can hear the Moog Mother, Prophet 08, and Tempest. On the Track You, the sub-bass was made by resampling the Tempest. I was playing around with the filter frequency which was self-oscillating and creating a warped sub sound that I then chopped up in Ableton. The Prophet and the Moog Mother were on pads and crazy arp duties. The Moog Mother Is semi-modular, so you can get some pretty awesome randomized results.

I bought all of my gear that I have now with the money I got from composing for a TV ad a while back. Prior to that, I was using an ancient Alesis Firewire mixer, a MIDI keyboard and not much else. So I’d say my biggest investment would be the set-up as a whole. New Macbook, RME UCX, and the synths. I do now want to upgrade to a UAD interface and a few choice bits of outboard. A great preamp and compressor/limiter are on the wishlist. 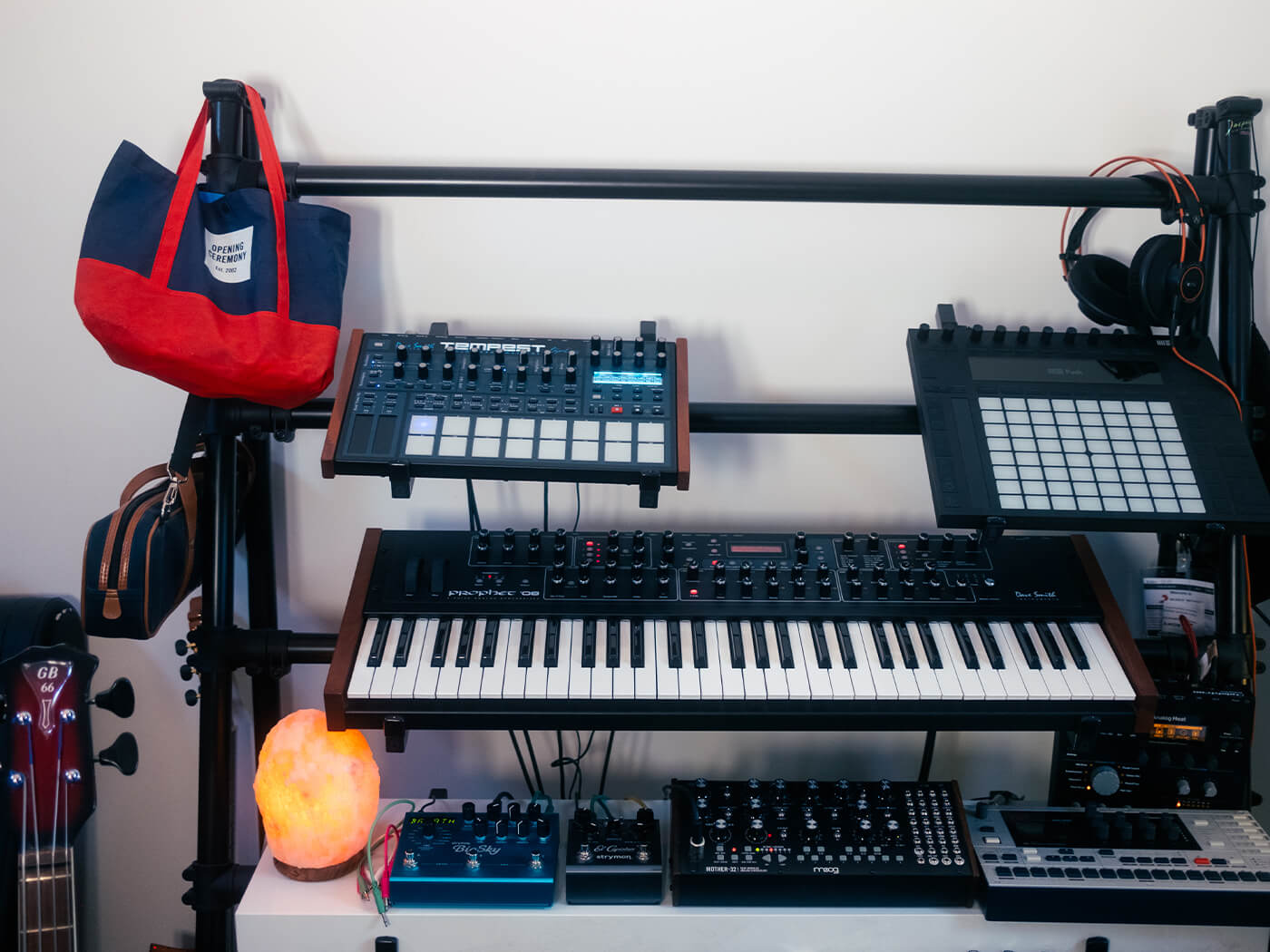 My monitors, the PreSonus Sceptre S8s, do a great job of making the most of a weird or bad room. Their CoActual technology gives me a wide sweet spot and they are also great at low volume which helps with mixing bass. To be honest, for 90 per cent of music-making and mixing, I really believe in knowing your space, I haven’t listened to any of the conventional rules in my current space, and my speakers are set up in the corner of a weird shaped room. Also, remember that a good pair of headphones you know well are your best friend when it comes to mixing in unconventional environments. 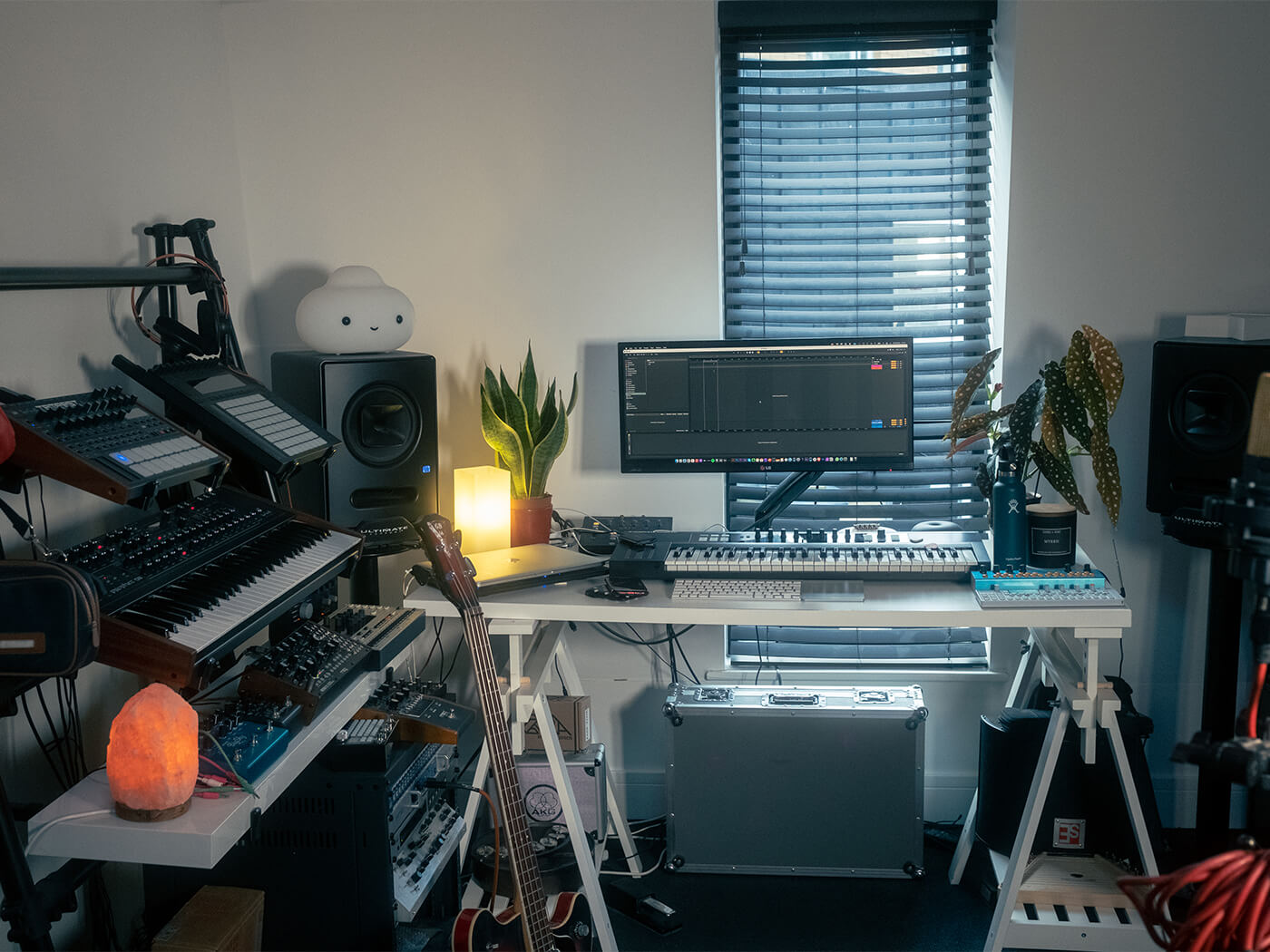 ROLI’s Seaboard. My friend that I write with has been championing it since he bought the Seaboard Grand. It’s incredible; it brings such a versatile and tactile way to work with electronic music. I think you can definitely get sounds with that thing that you cannot get without it.

The Yamaha CS-80. There is just nothing else like it. Ever since I heard Vangelis’ Blade Runner score and found out that it was the CS-80, I’ve been intrigued by it. My friend’s boss actually has one, so I’m hoping I can get a cheeky play on it at some point. 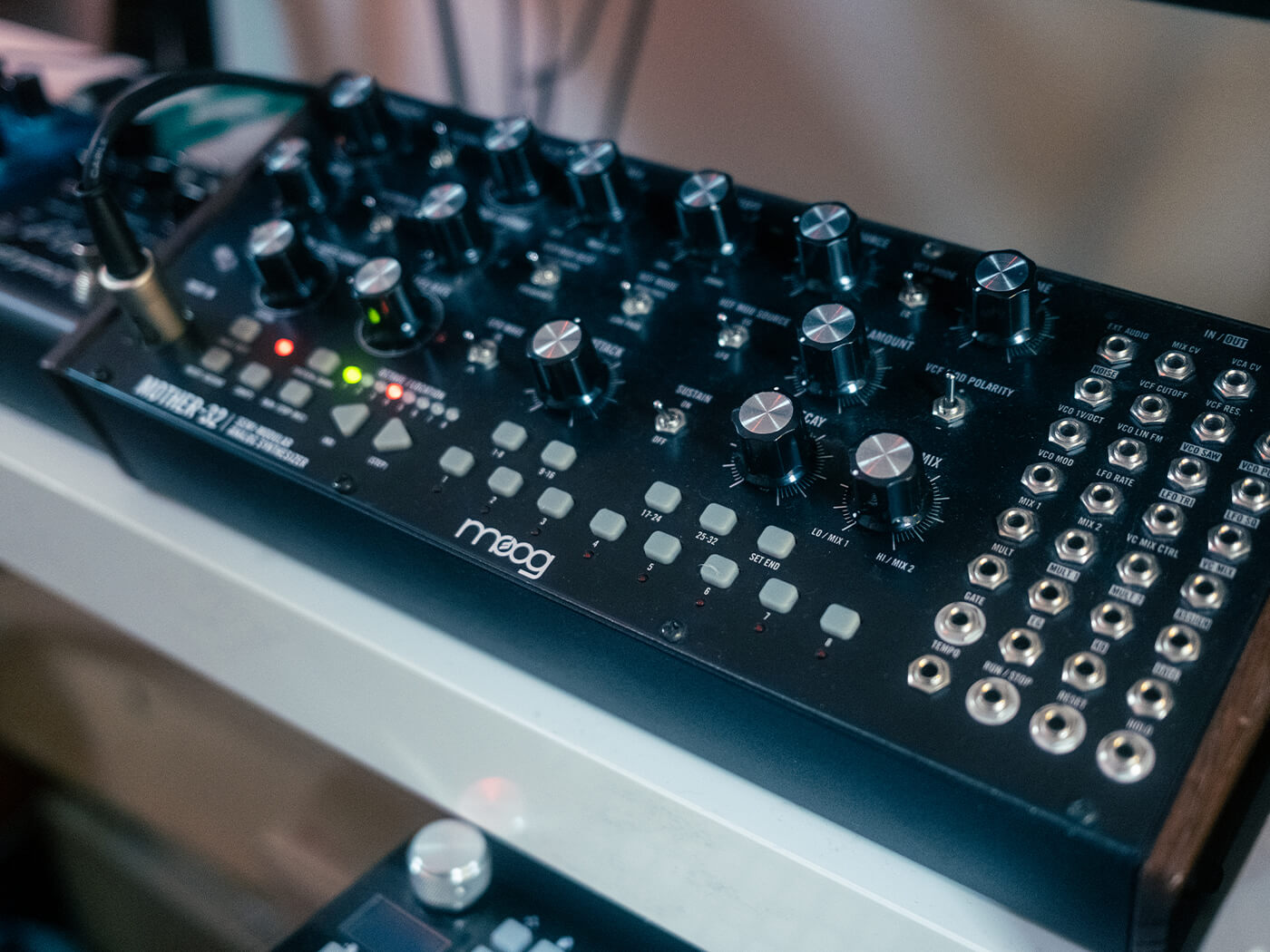 My current MacBook is getting old now and it’s definitely time for it to retire. Besides that, I’d love to have an interface with more inputs and outputs so that I can have everything recording at once with no wire fiddling. I have a Samson patch bay which does make things easier, but I’m increasingly wanting to improvise and create happy accidents. So a 16 or even 32 I/O setup would be amazing. 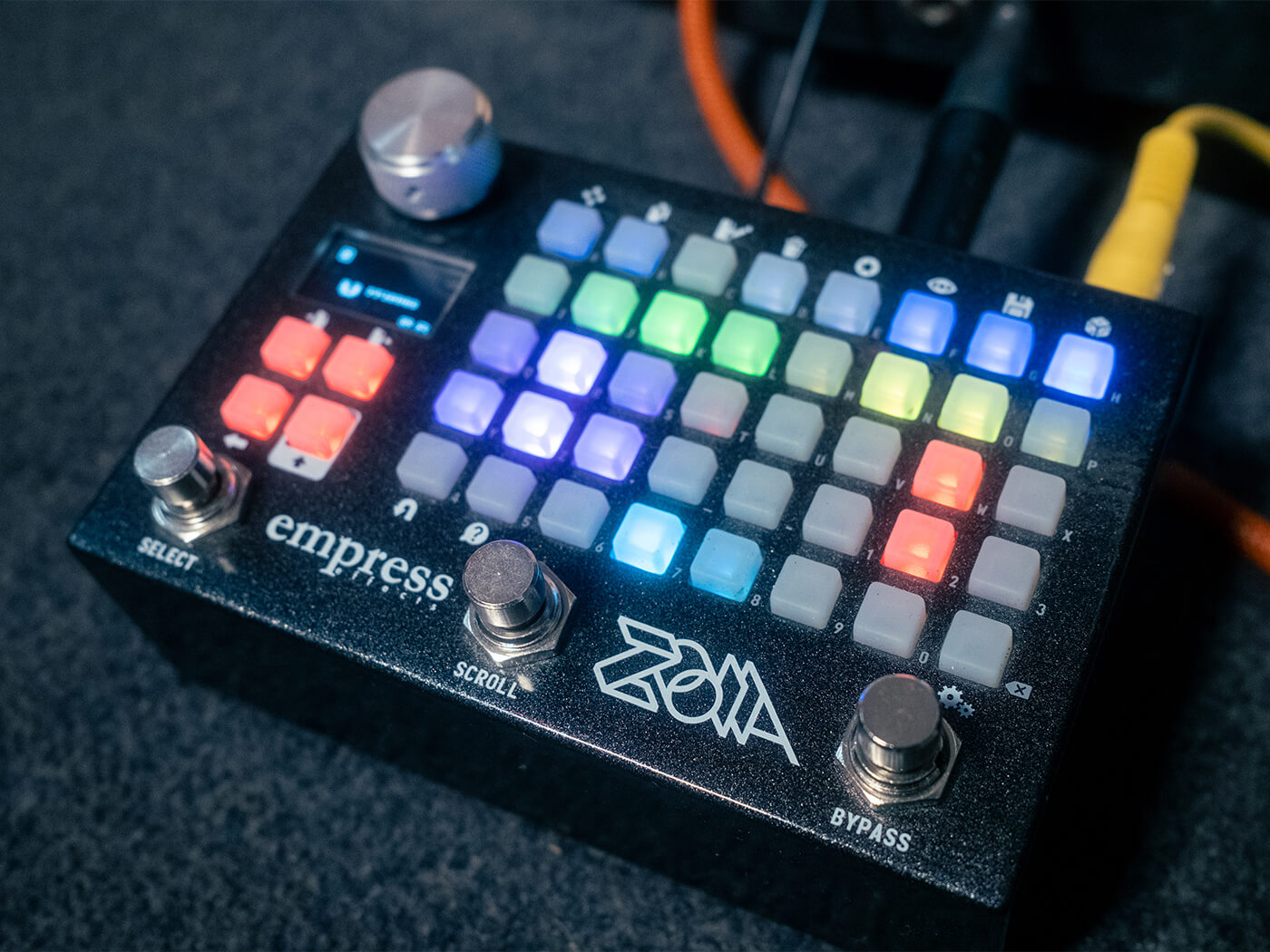 Make as much music as you can and as often as you can, and don’t expect it to all be good. Sometimes, you have to splurge out a ton of crappy ideas to land on the golden idea that you want to run with. Try and make weird unique sounds, and enjoy the process. 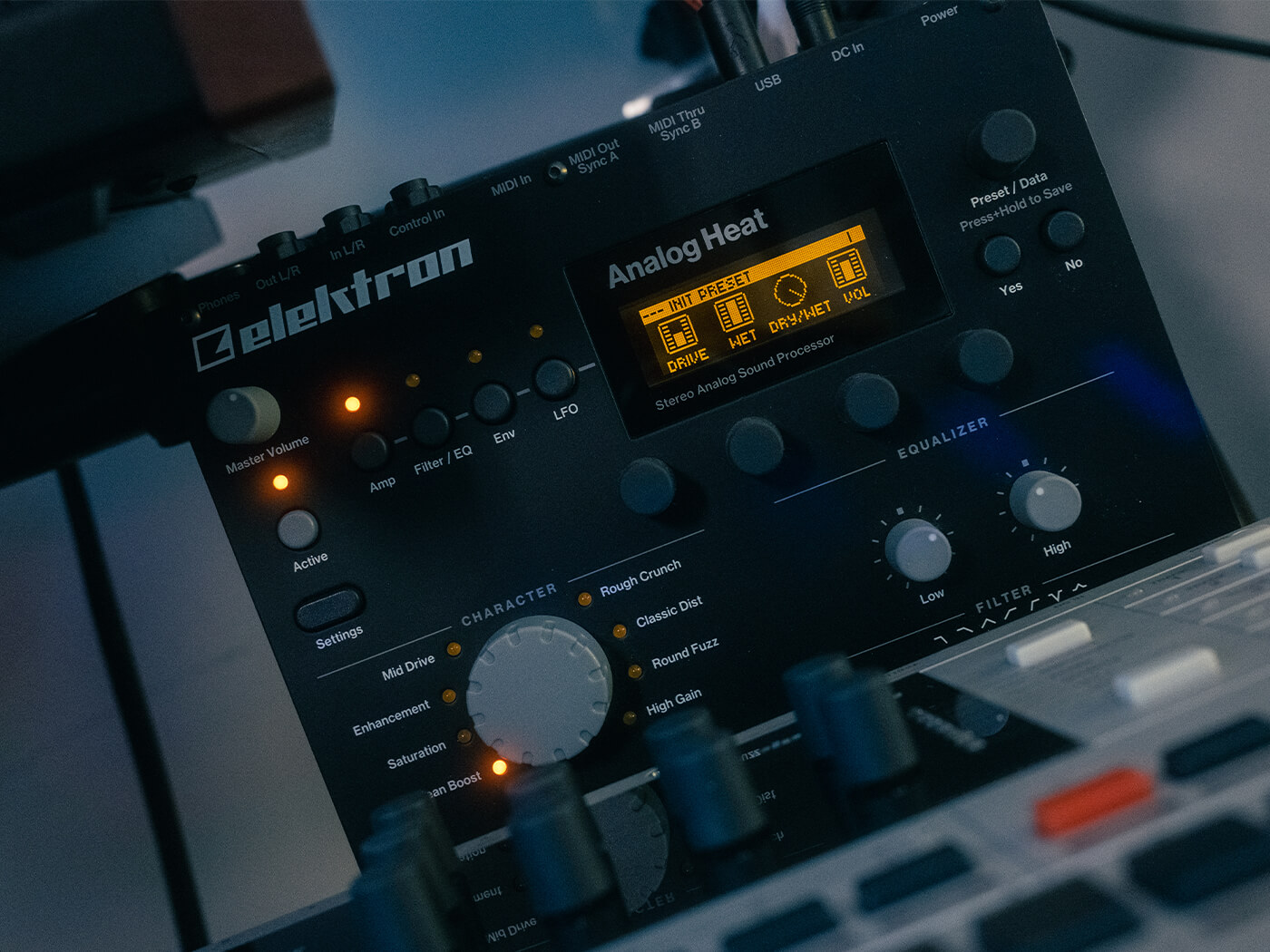 After you have the basics covered – laptop, audio interface and MIDI controller – bring things in one by one and really get to know that piece of gear. Also, think about what your goals are for the studio. If you are aiming to record with vocalists and other artists, maybe your key thing is getting that vocal chain right. If you are primarily mixing, then make sure your listening environment is as best as you can make it. 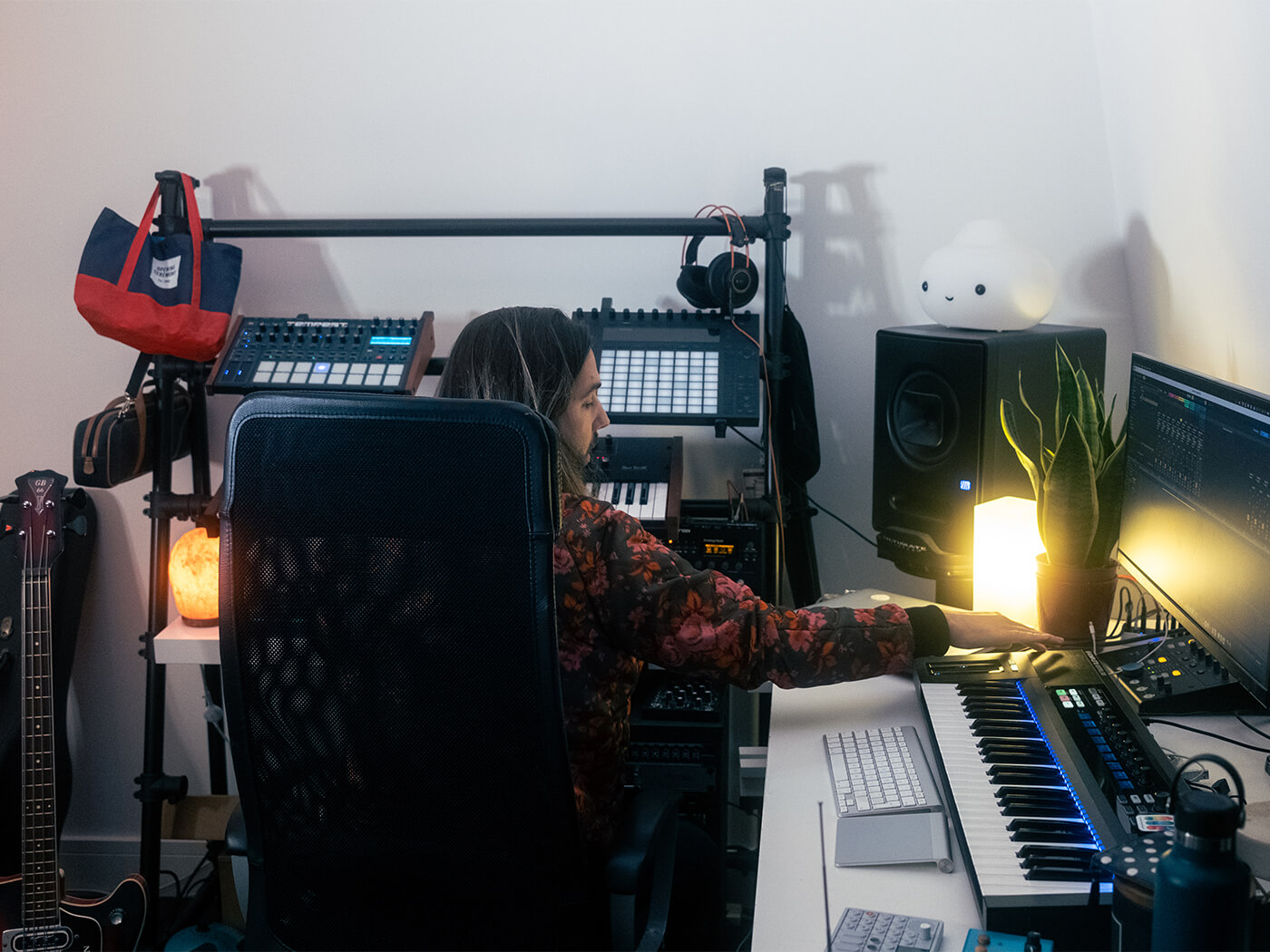