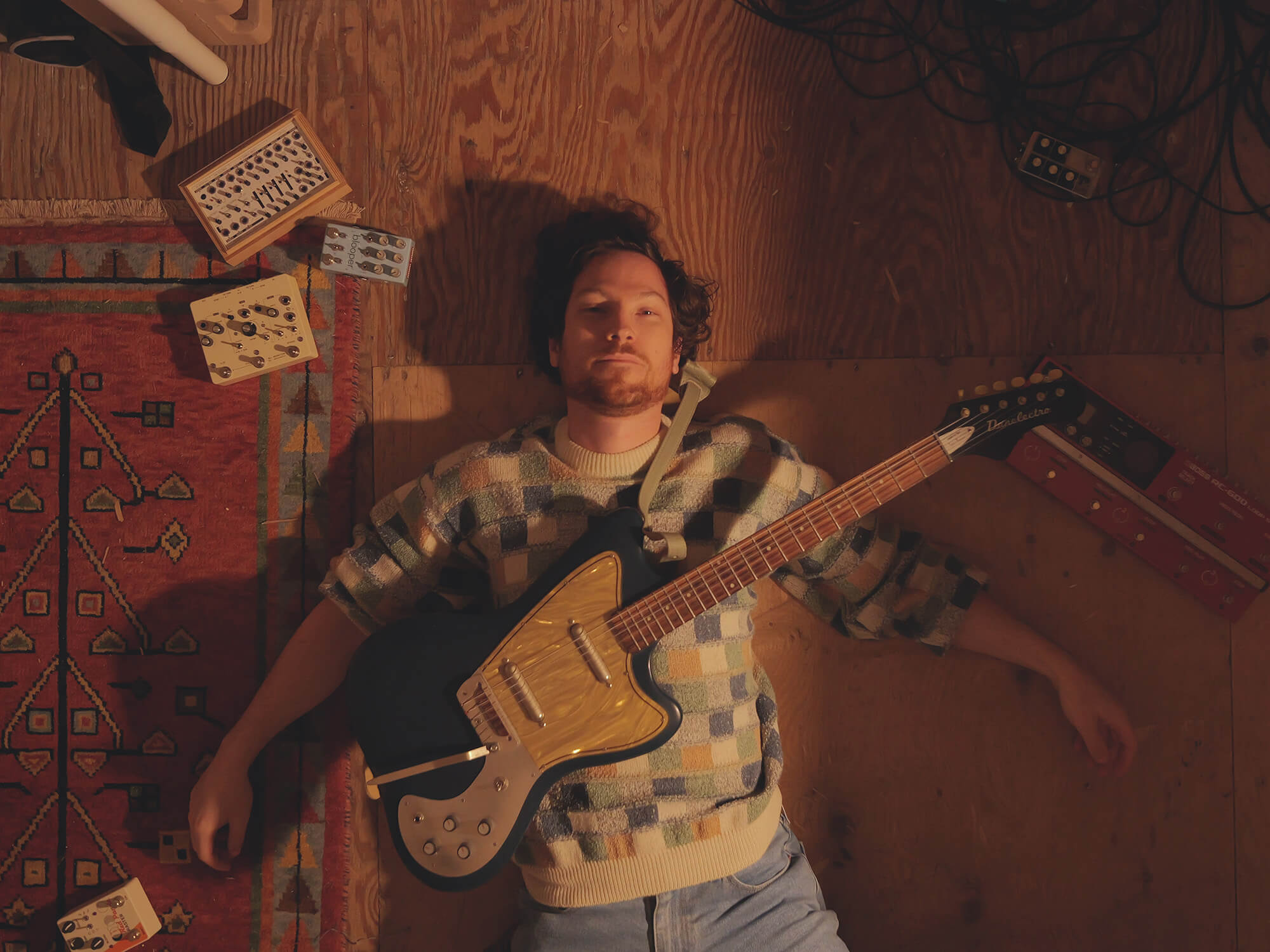 Show Off Your Studio: Knobs’ “museum” of gear

The Toronto-based instrument and effects enthusiast talks gear and the release of his debut album.

“Like stumbling across a dew-covered spiderweb, or a lighthouse overrun by nature, or seeing broken glass catch the sun. Accidental, intentional, beautiful.” The words of one listener of the debut album by Toronto-based musician, vlogger and instrument-maker Knobs.

He’s created a cult following of fans who appreciate his use of whacky pedals on guitars and other instruments. Like shoegaze for gear nerds, Knobs’ debut album, Stipple, which was released in September, comes with a note: “Each track is a puzzle, built around skittering guitar loops and grounded by a chamber orchestra. A tangled and dense shape, appearing slowly.” The album is the sonic equivalent of riding a bike on a brisk sunny day – breezy and relaxed but vibrant and engaging.

We check in on Knobs to find out what’s on his pedal board, what make him tick in his studio and how he uses loops and effects to contort sound.

Hey Knobs! Your debut album, Stipple, is a rich, ecosystem of sculpted sound. Where was the album made?

I started recording Stipple during a winter residency on a little island near Toronto. Minimal setup, whatever I could fit in a camping bag. I had no concept in mind – I just wanted to give myself some space and see what would come out.

I’ve dragged it through a couple of different places since then. Assembly and editing took the longest time by far and that was mostly headphones and a mouse. 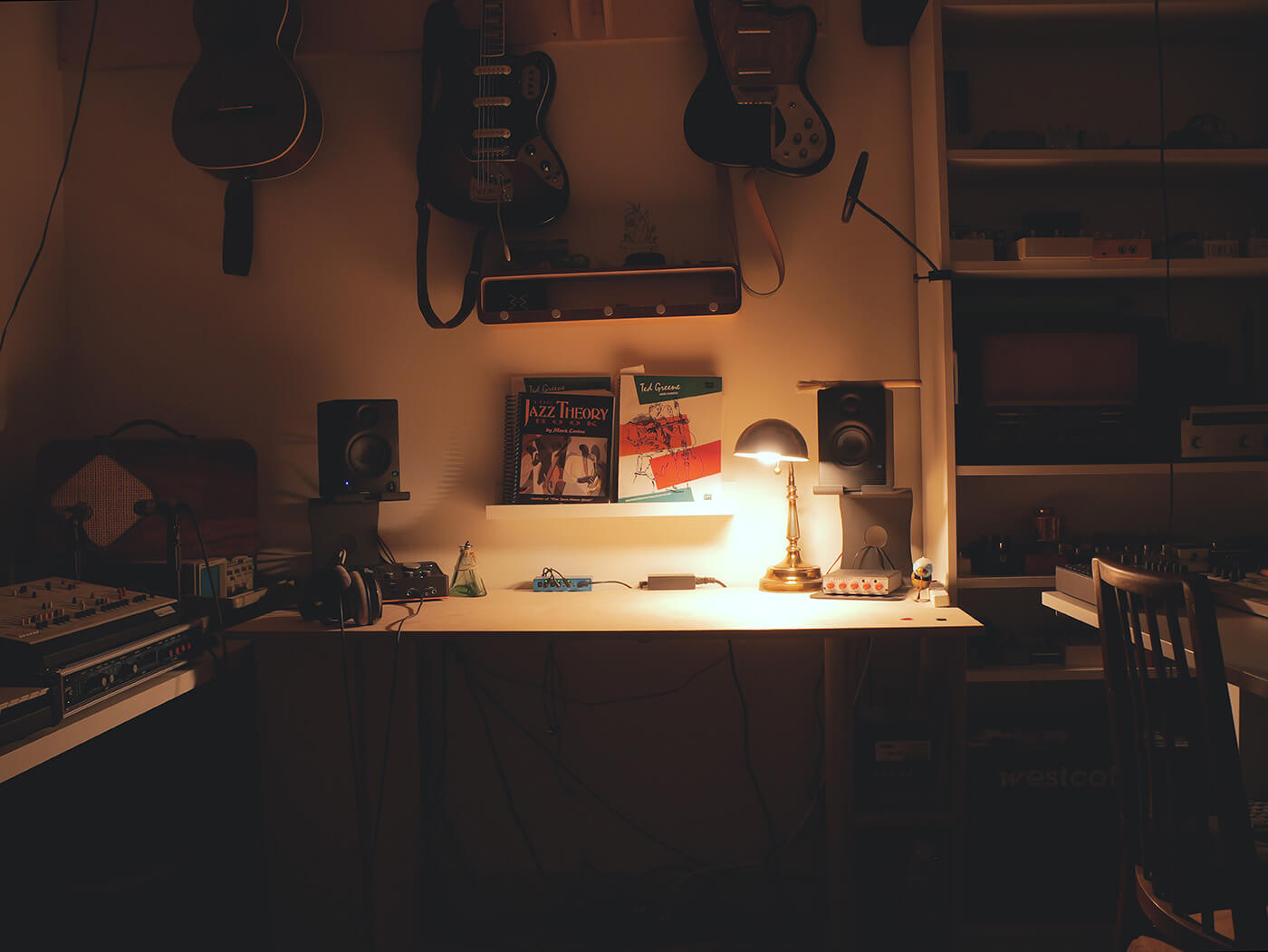 What’s your favourite type of knob?

You’re a man of many pedals. What’s a secret weapon pedal you’ve been using recently?

The All Animation by Akkusativ. It gives you a bunch of different ways to crossfade between two different effects loops. 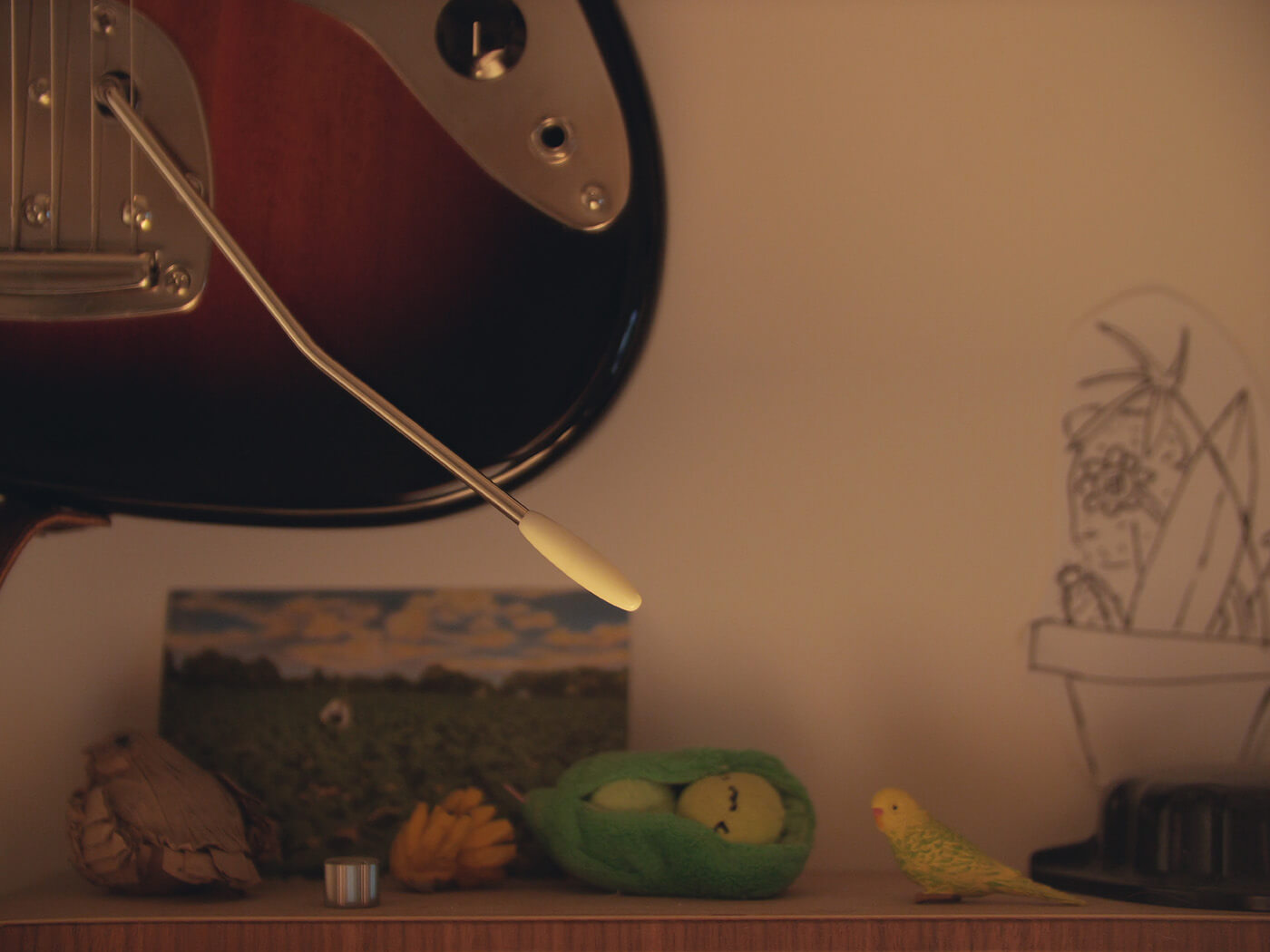 My studio is a little sound-proofed cube inside a wood-working studio in Toronto. You can hear the table saw through the amp sometimes.

I film there, I edit videos there. I have lights bolted to the ceiling and a sliding camera mount overhead so I can easily film anywhere.

All the instruments are clumped along one wall, with the computer on the opposite end of the room. I leave a desk in the centre empty as my blank slate to quickly try out whatever comes to mind. I made a choice that the computer wouldn’t be the focal point, which was probably a mistake. I end up doing a lot of 180s back and forth between my instruments and the computer.

I’ve been there for about 5 years now. 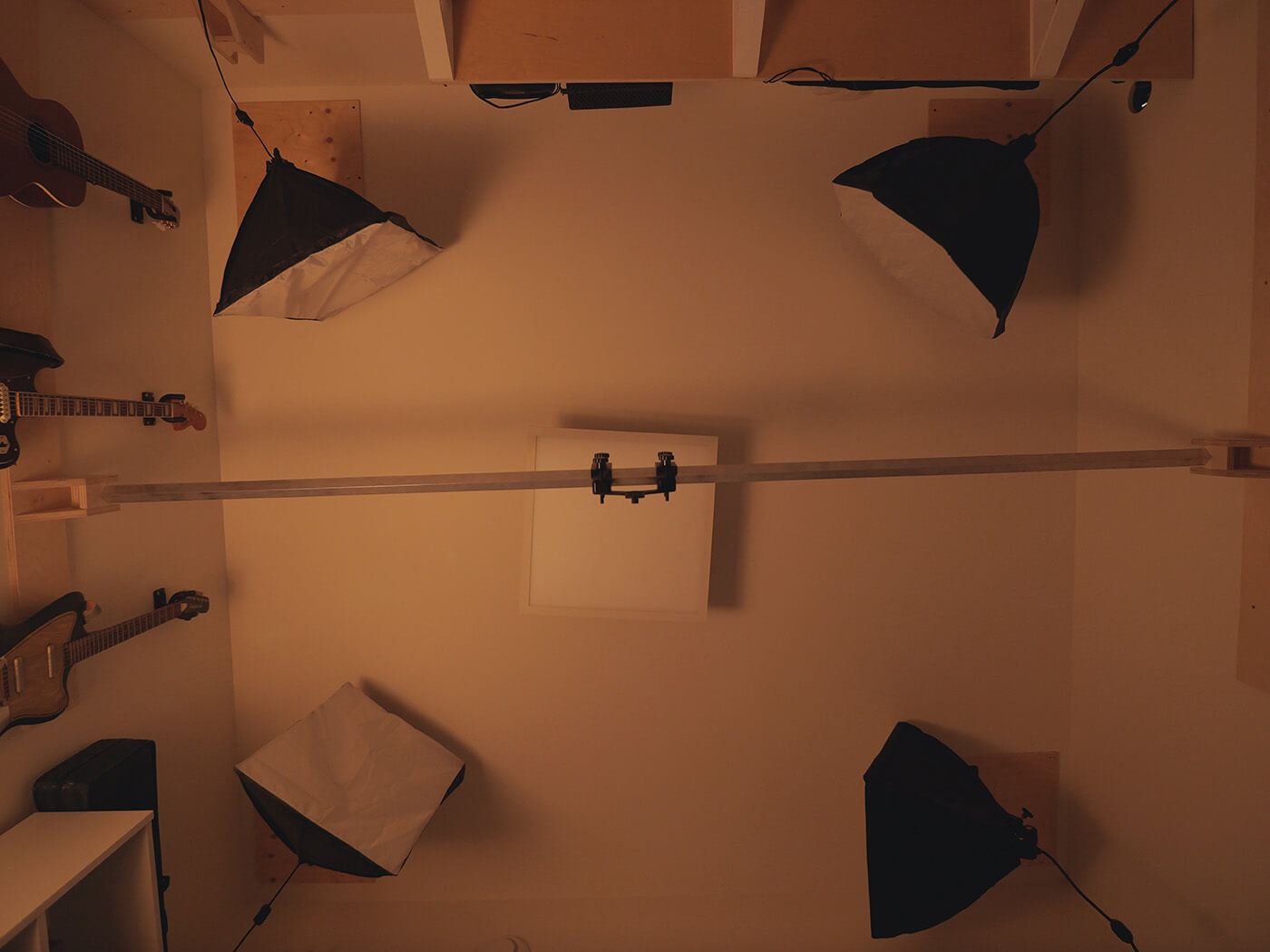 I set up an old CRT TV / VCR recently, running through a video processor (BPMC Fluxus Duo). So if I’m stuck on something I can just futz with that and keep the momentum up. I pick up $1 VHS tapes I’ve never heard of and leave them running on mute, or I fix a camcorder on the instrument I’m currently using.

I switched over to Apple Logic Pro halfway through making Stipple. I tried to make Reaper work for me for a long, long time. I’ve never been very interested in learning the ins and outs of software – it’s more of an immediate comfort/intuition thing. The first DAW I got into was Sony Acid so I probably just gravitate towards things that feel like that. 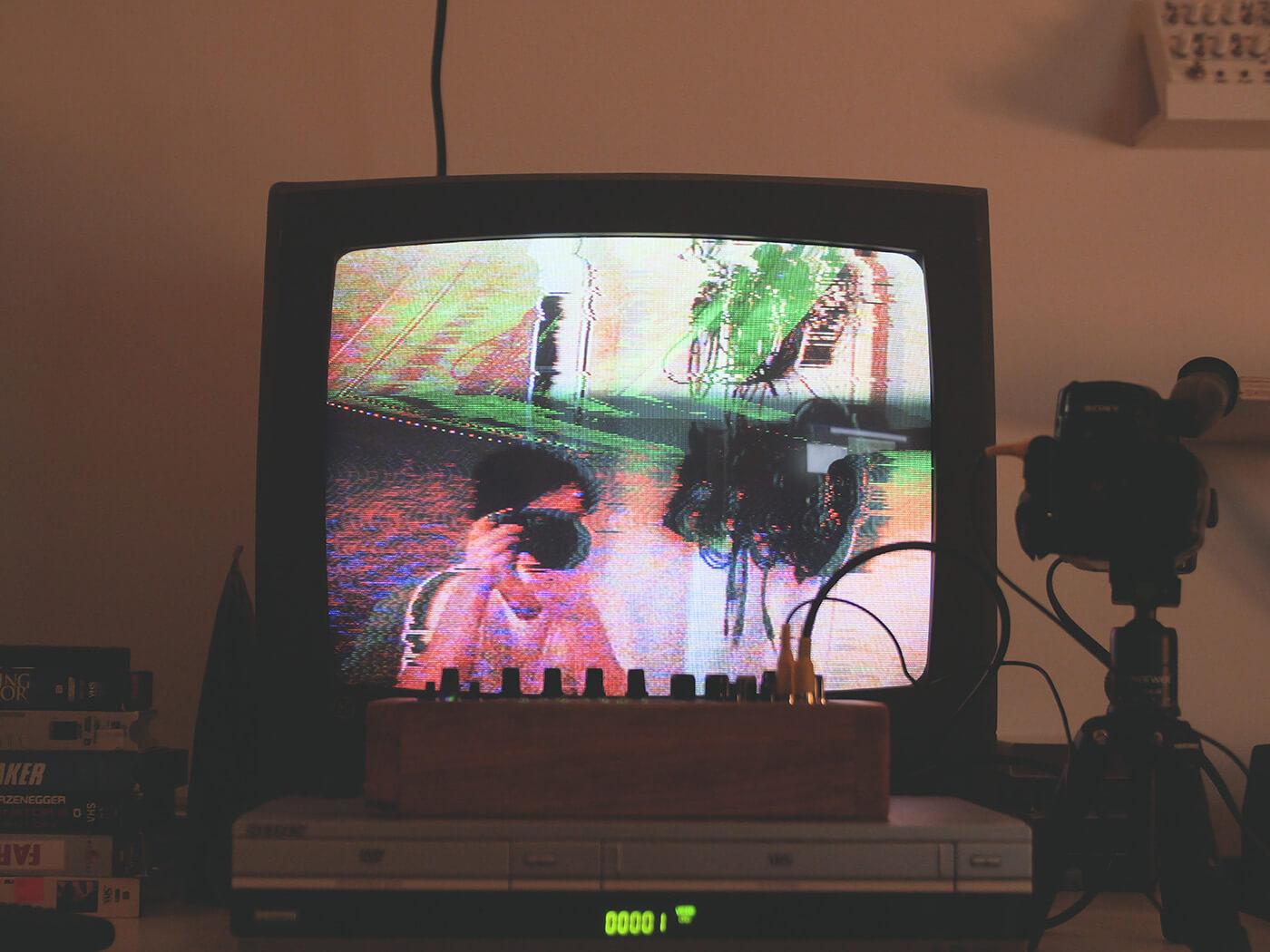 Definitely a loop pedal. I love the process of harmonising with my own improvisations and finding ways to fill in the gaps. It forces me to find new techniques and to really listen. Looping and guitar playing are totally interconnected for me.

I’ll say blooper even though I made it. It’s the thing I use the most, by far. 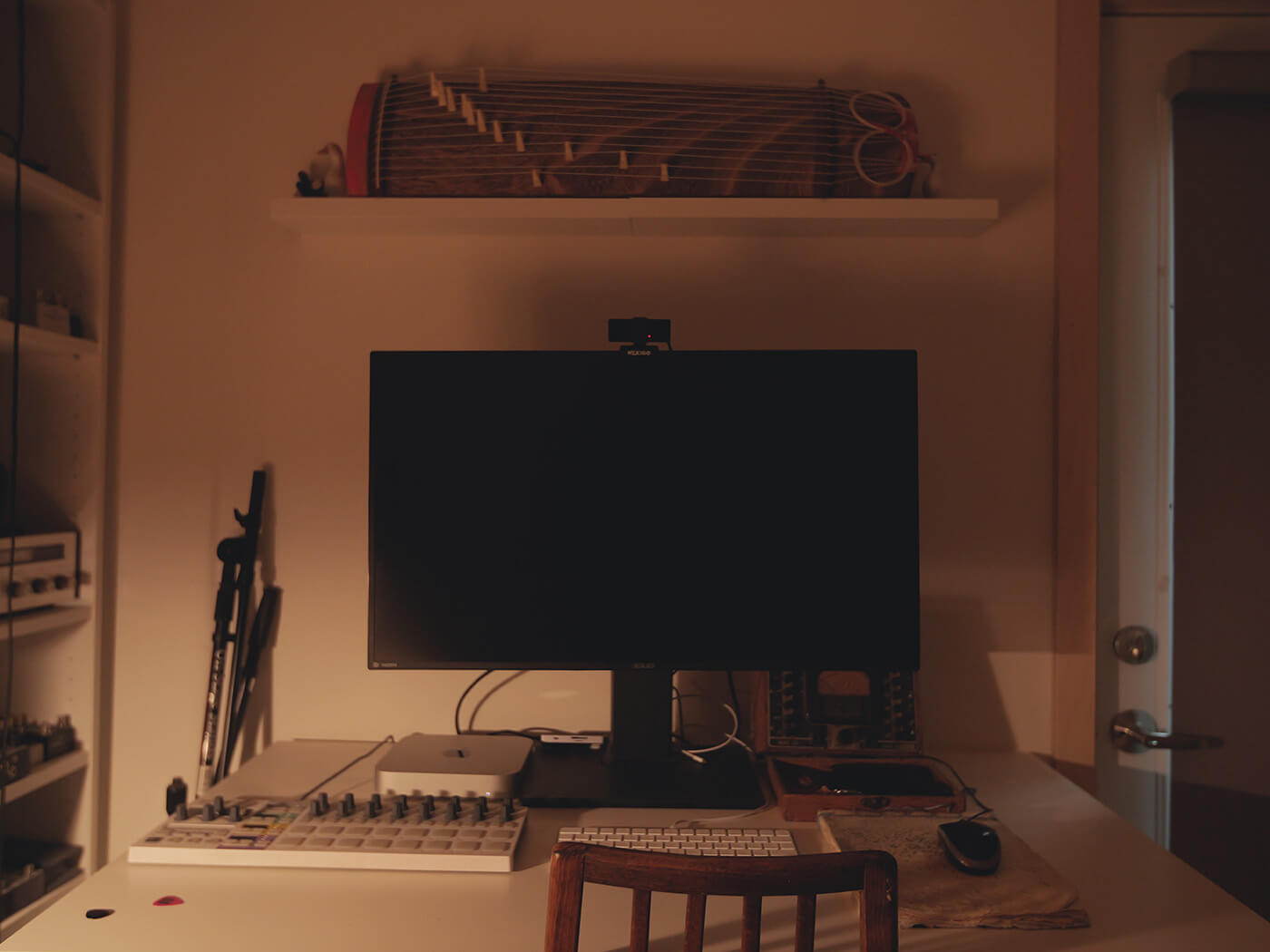 What synth or effect can be heard the most on Stipple?

Also blooper. The base of every song is a loop, and there are many moments where other secondary loops will briefly flutter into view.

How do you use guitar on your tracks? Do you go into songs consciously thinking ‘I’m going to play my guitar like this today’ or do you just see what happens?

I always just take what comes. I should probably create more games or limitations for myself to shake things up – that kind of thing can be really gratifying. 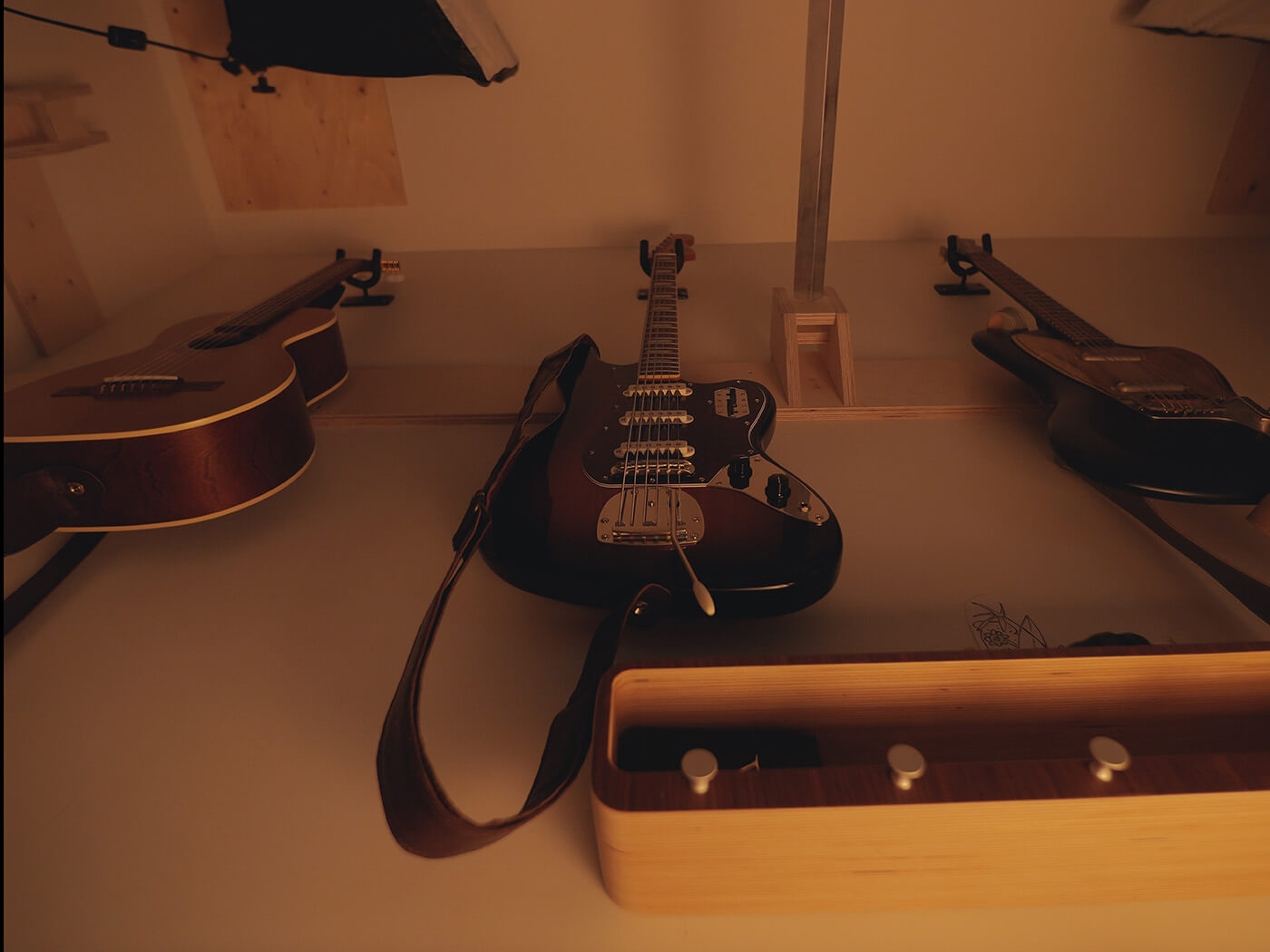 Talk us through your pedal board.

I’ve dabbled with bigger boards and more complicated ideas but I’ve never been able to get them to work for me. Things end up feeling watered down. I usually like to use pedals on their own, and really concentrate on them.

I do wish there was room for a tremolo.

I guess in sum it would have to be modular.

I’ve been gravitating away from it but I learned a lot along the way. It was like a really fun and expensive course on synthesis. It opened up a lot of pathways and ideas and also taught me the value of limitations.

It was worth it, but I’m going to sell most of it now.

Something that exists? Hmmm. Probably some old, esoteric, colourful synth like the Buchla Music Easel. Something that would make me feel like a beginner again, and I could just sit down on the floor with it and record a whole album.

I’ve been wanting to do a desert island kind of thing with the Polyend Tracker. I love when a piece of gear forces me to adjust, and the Tracker is also so self-contained. I think I could make entire albums on it, but also find ways to keep it fresh from project to project. 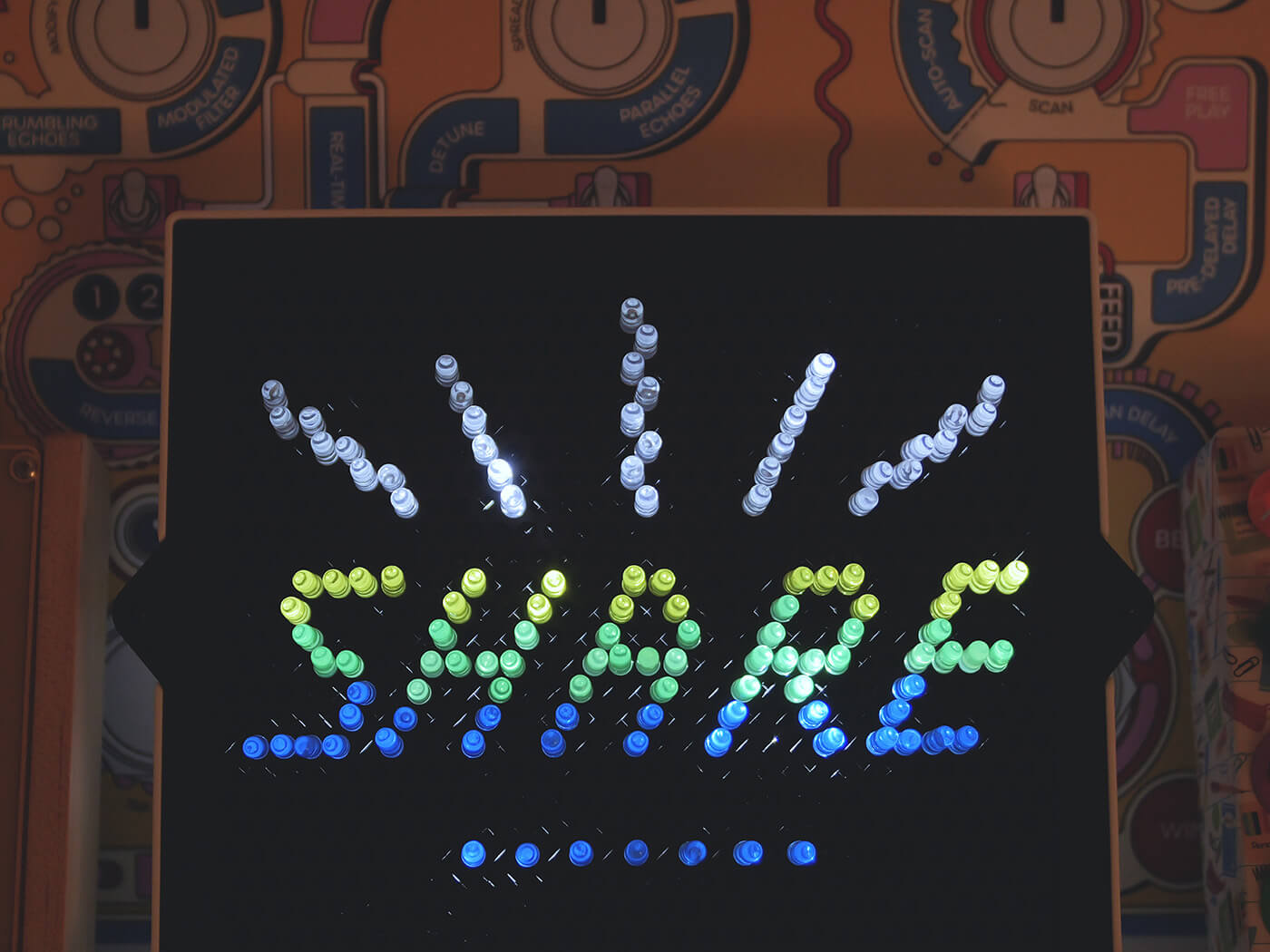 I just take what the room gives me for the most part. I’ve realised I’m not that picky about acoustics as a listener – I like a bit of imperfection.

The only thing I really care about is recording my amp accurately, so it sounds the same as what I hear in the room. I need to know that if I’m feeling good in a moment it will be captured the way I was experiencing it. So I end up being pretty particular about amp placement and mic’ing – how far the mics are, where they point. Every room is different.

In a mix, none of that stuff really matters for electric guitar, but I’m used to the guitar being the focal point (or sometimes the only thing).

Oh yeah – it’s cluttered. I had a very maximal idea in mind when I set it up, I wanted the room to feel like an old museum with little surprises everywhere. I thought it would be stimulating.

I learned that I don’t really like options because then I’ll just float around the room. I’m much happier when I settle in with a single thing and I have to just find a way to make it work. I like when it feels like a puzzle and that doesn’t happen when I can just switch to using something else.

Just try to keep things simple and honest. It’s you that people are going to connect with ultimately so do what you like and you’ll always make something that is uniquely yours.

A studio is an extremely personal thing. Try not to over-plan or buy too much. You won’t really know what you need until you get started and you’ll be tweaking this stuff your whole life.

Buy or stream Stipple by Knobs on his Bandcamp. Find out more about Knobs’ work at knobscreative.com.