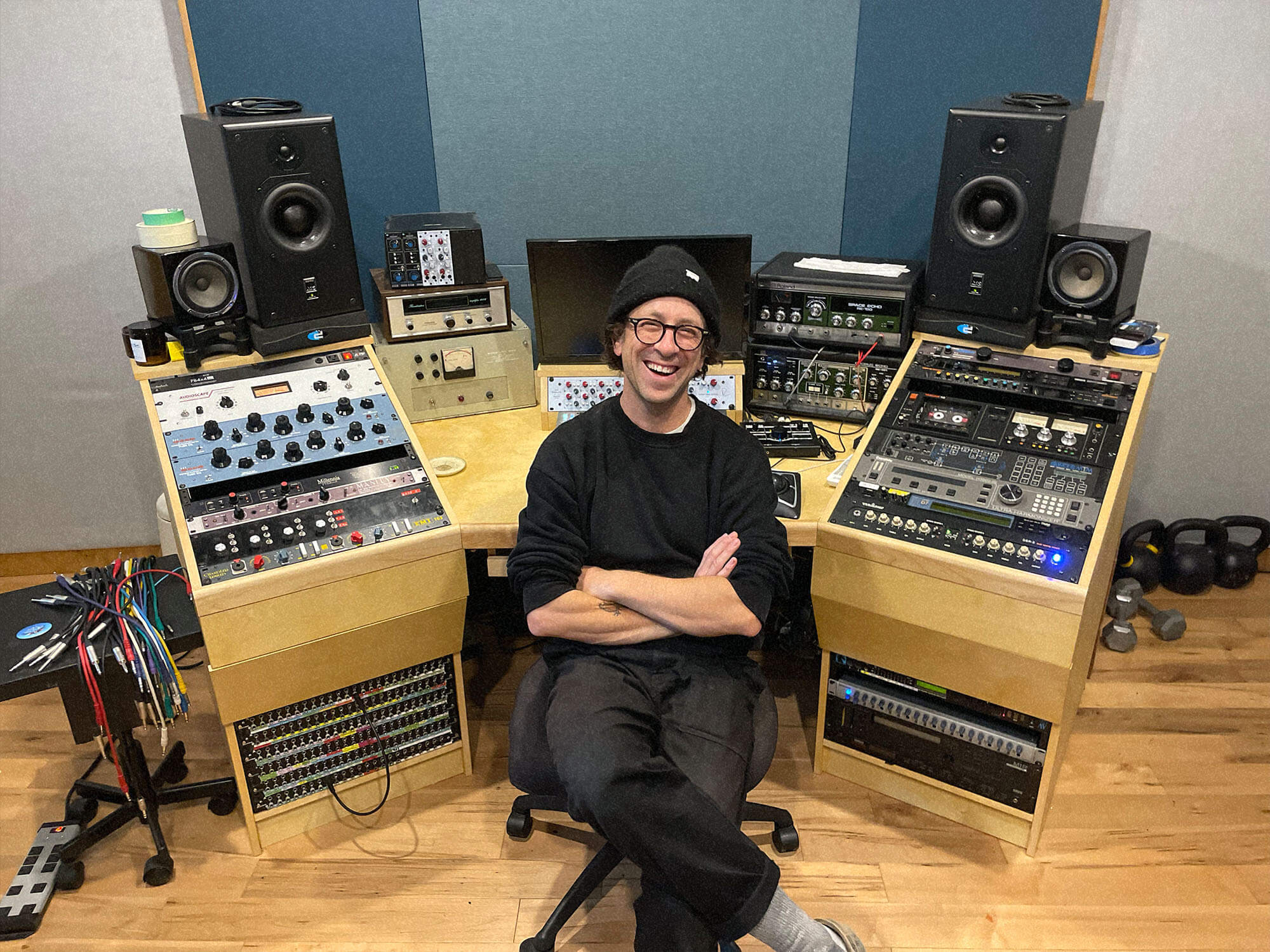 Calming jazz-rock with a retro feel thanks to classic hardware processors.

A cosy winter is coming and the leaves have already turned autumnal shades of orange. It’s fitting, therefore, that Toronto’s Joseph Shabason teamed up in the winter of 2021 with regular collaborator, singer and pianist Nicholas Krgovich to record a heartwarming new album, At Scaramouche. The album, quickly following its related predecessor, Philadelphia featuring Chris Harris, is a tranquil and wholesome electronic-tinged jazz-rock record hosted by the poetic vocals of Krgovich, that’s made to be listened to on stormy nights.

MusicTech speaks to saxophonist, session musician and solo artist Shabason about where the album was recorded – his own space, Aytche Studio, how he used his “ride or die” Roland Juno 6 and what processing units were used to record it.

Hi Joseph. We love At Scaramouche. You and Nicholas Krgovich also previously worked together on Philadelphia, which documented “the indoor minutiae” people existed within during the pandemic. However, At Scaramouche “steps out into the sunlight squinting groggily” post-pandemic. What inspiration led you to write the new album?

This time around we utilised the studio way more and also approached it as a band effort compared to the last time. Right from the jump, we fleshed out the demos with bass and drums whereas last time we kind of added them at the end as more of a “this might be nice to hear” type situation. Overall, At Scaramouche feels like so much more of a full-band studio album compared to Philadelphia, which to my ears always feels like a bedroom synth record.

The studio is called Aytche Studio and it’s located in my backyard. Originally it was my garage but after I got kicked out of my shared studio space (when it got sold to WeWork) I ended up converting it into a proper recording studio.

Toronto is such a garbage city for protecting the rights of anyone who isn’t a landlord so I knew that if I didn’t build my own space I’d just keep getting kicked out or renovicted out of any space that I ended up in that wasn’t my own. Once I decided actually to go for it I got my friends Leon Tahney and Chad Ross at Signal Acoustics to design and build it so that it would be just right for what I wanted to do. 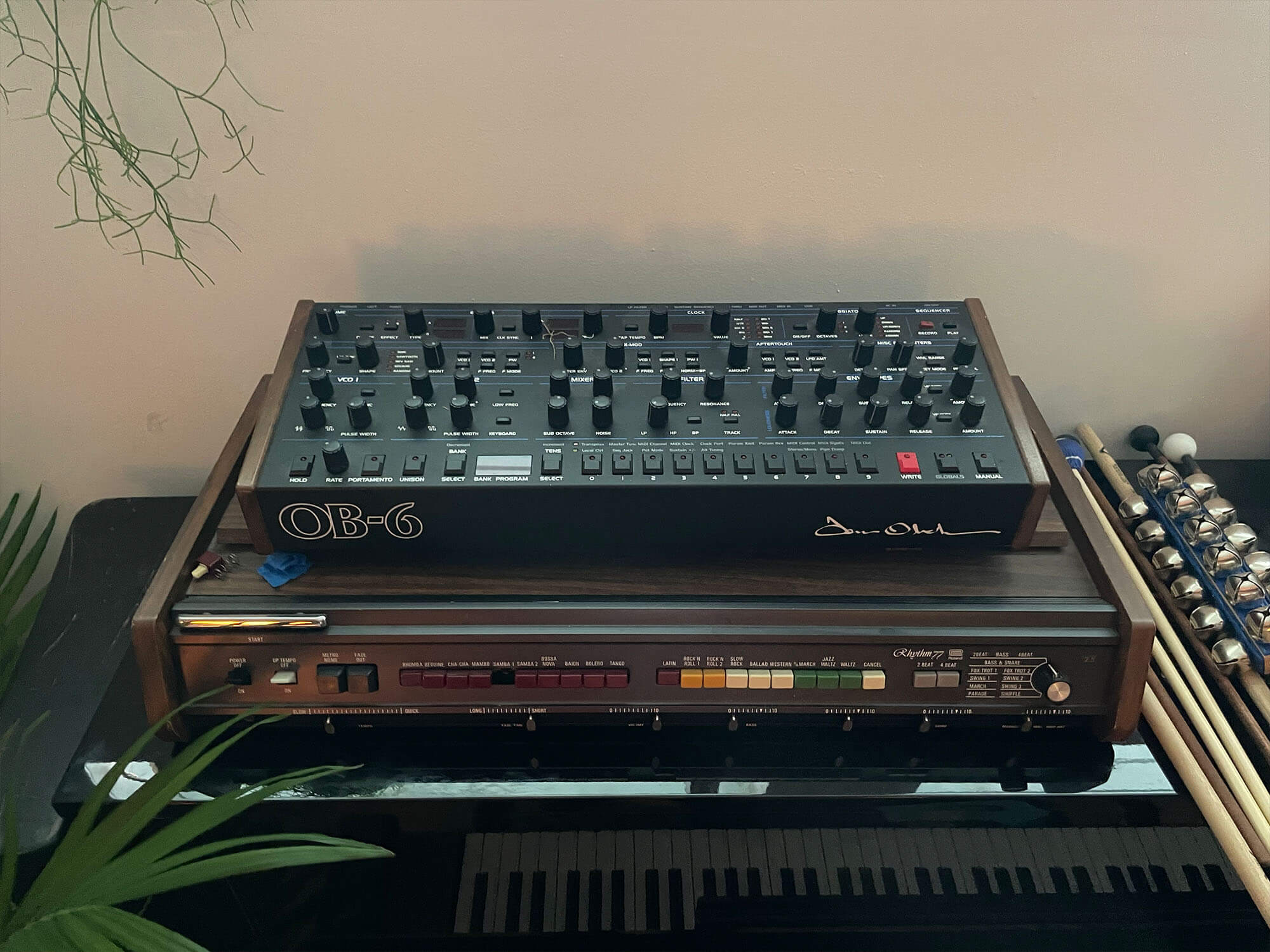 I use it to write and record my own music, record bands, do remote woodwind sessions as well as score films and TV shows. I record everything from drums to synths to pianos to woodwinds in this room. I don’t generally rent it out but if a friend approaches me and wants to use it I always find a way to make it happen. I’m in here most days from 9-5 making music so there often isn’t a ton of time for other people to rent it out. That said, if I am producing someone’s record, I will rent it out to them and often engineer as well.

The layout is one big amazing sounding room that I know very well so I basically am able to get great sounds no matter where we record. All of the patching happens in the rear wall panels that run under the floor and come out into the patch bay in my desk. Because I have spent so much time here, I know the room and gear well enough that I can get really good sounds very quickly. The real benefit of the space is just how quickly any source can be mic’d up or DI’d while still sounding amazing. 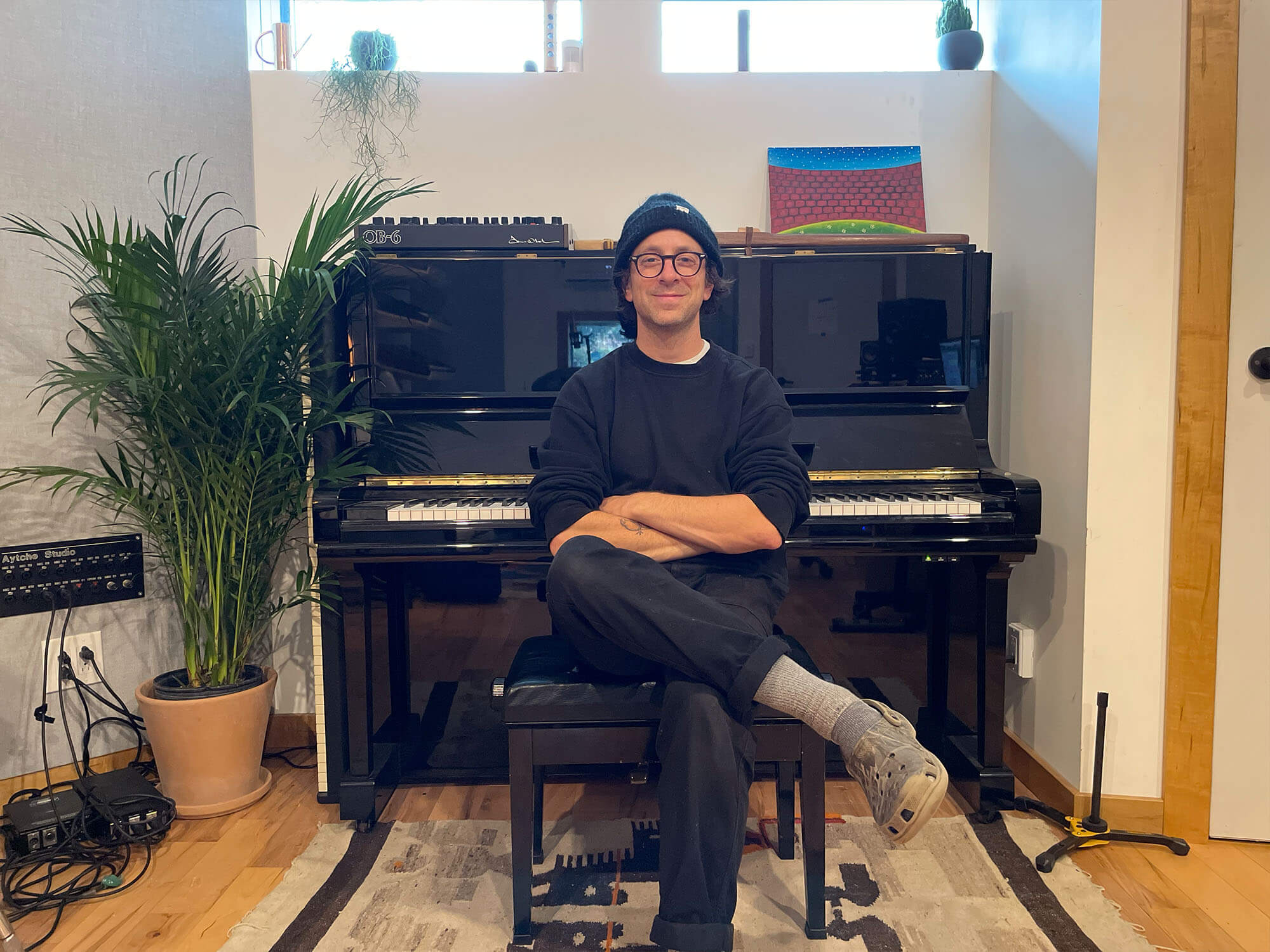 I try and get a vibe where everyone feels comfortable to try out whatever idea they want and to be able to experiment to their heart’s content. I hate going into a studio you’ve paid some outrageous amount of money for and instantly feeling the clock ticking. For pretty much everything I work on I try and agree on a flat rate so that people feel like they have the time and space to try things out and experiment. That was something I learned from Roger Leavens who recorded the first DIANA album and I try to bring it to every project that I work on. For me, the second you start to feel pressure and time constraints is when creativity starts to suffer.

Oh god, what a question. These days, I think that tape echos are floating my boat. No plugin even comes close to sounding as weird and idiosyncratic as them and what they bring in the way of vibe is just wonderful. Plus, if you fuck with the space speed as you record, the pitch wonkiness is my fave. 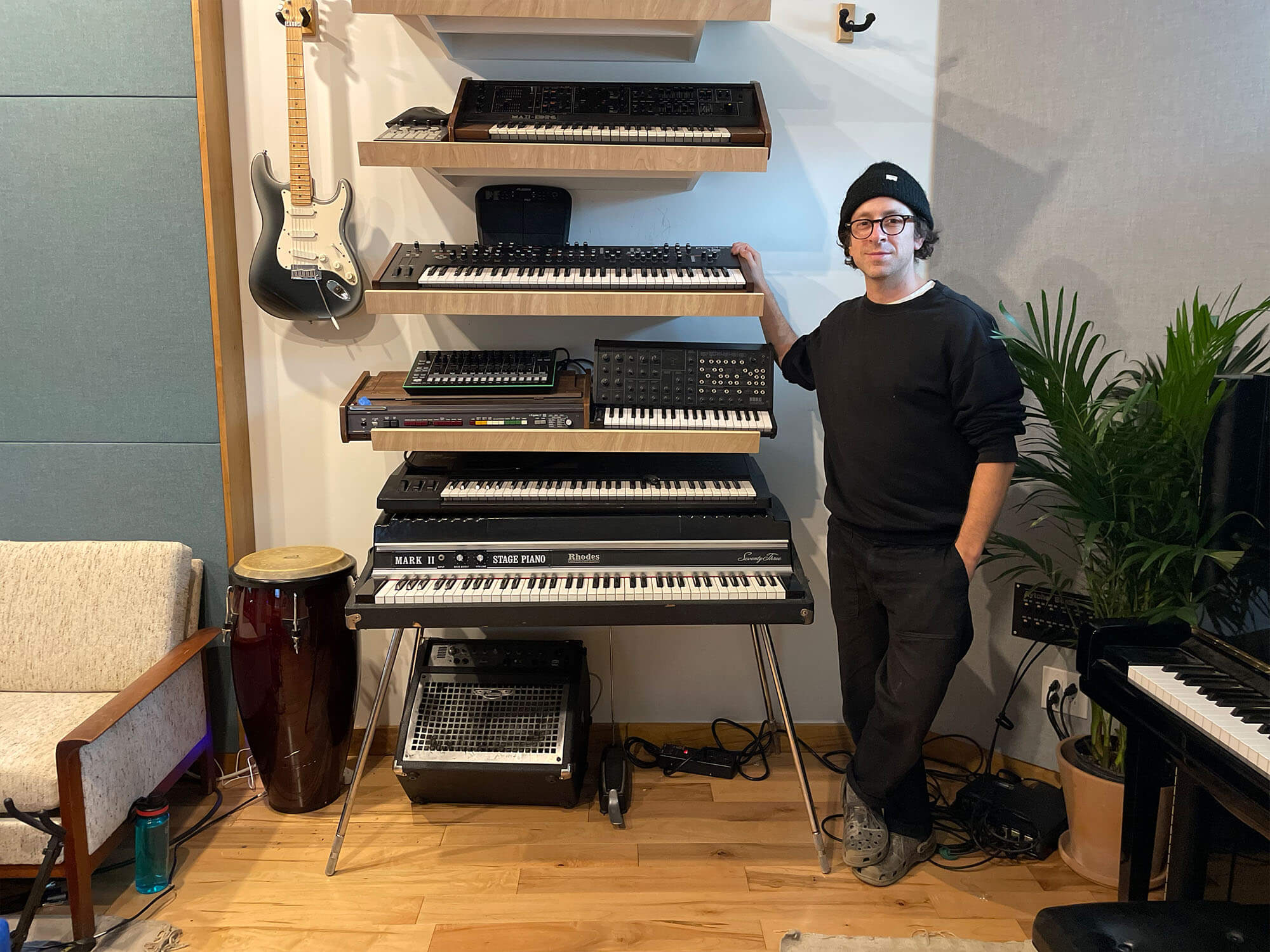 What synth or effect can be heard the most on At Scaramouche?

My Roland Juno 6 (my ride or die) combined with the Vermona DSR-3 Spring Reverb.

How did you process Nicholas’ vocals on the album?

I sent his vocals into a Warm Audio Pultec Clone and from there I put him into the Gates Level Devil and then into the Teletronix LA-2A Classic Leveling Amplifier. I used the Vermona DSR-3 for all his vocal reverb. After that was all recorded, I also used Pro-Q3 for dynamic EQing as well as some plugin de-essers. 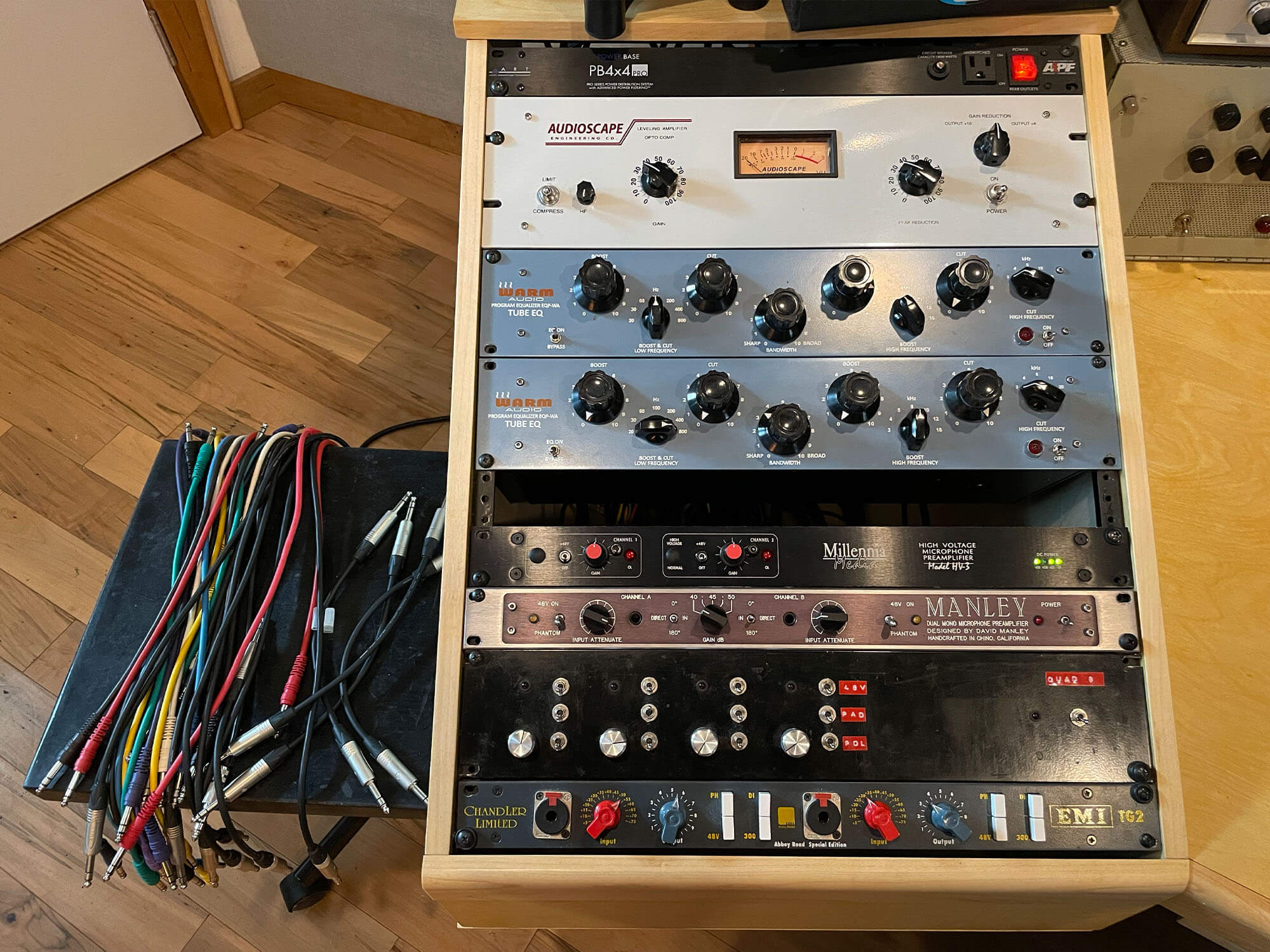 In The Middle of The Day – how have you achieved the lead synth melody? And how is the flute processed?

That lead synth melody is a Roland JX-8P preset that I fucked with so that the pitch drifted much more dramatically than originally intended. I also used the Vermona DSR-3 for the reverb.

The flutes are majorly compressed with the UAD 176 compressor plugin and then sent to a hard-panned tape slap on my RE-150 Space Echo. As the delay is happening, I am constantly changing the delay time so that the pitch is all over the place.

I think we just do whatever seems to make the most sense for the song. Each different instrument and player brings so much to the table so when a song is taking shape we both know pretty quickly what elements it needs.

It helps that me and Nick’s tastes almost always sync up so there is rarely a time where we majorly disagree on what a song needs. That said, we always try every idea that one of us has so that we can be sure if it’s right or wrong. I have definitely poo-pooed ideas only to be proven wrong once I actually heard them recorded so now I try to be open to everything. You can always mute it later.

I am actually buying an AKG 414 B ULS today! All of my LDC mics are tube at the moment and I want something that sounds big and clear without as much saturation. 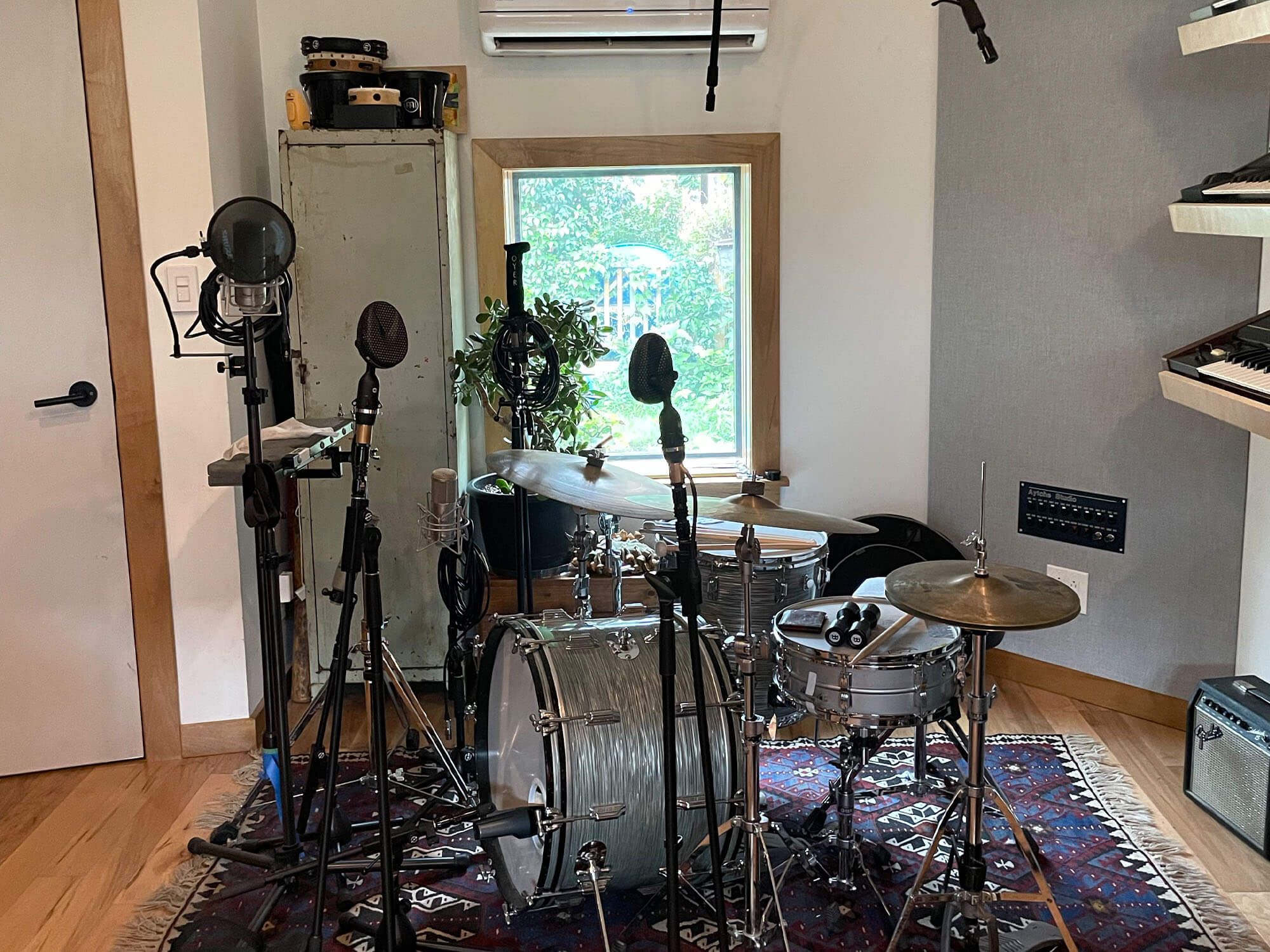 I would love to own an old Quad 8 Desk. I love how those old AM10 preamps sound (I have four of them) and to have a full desk with EQs would be an absolute dream.

I would take my saxophone. No matter how much you practice there are always new things to discover and master. It’s truly an endless pursuit and I would happily noodle away my time on that sandy island.

Hire professionals. And then I also use SoundIDReference which is basically $100K worth of acoustic treatment in a plugin. It’s nuts how well it works and it ensures that, no matter what room I am working in or what headphones I am wearing, I can get a relatively accurate picture of how things are sounding. 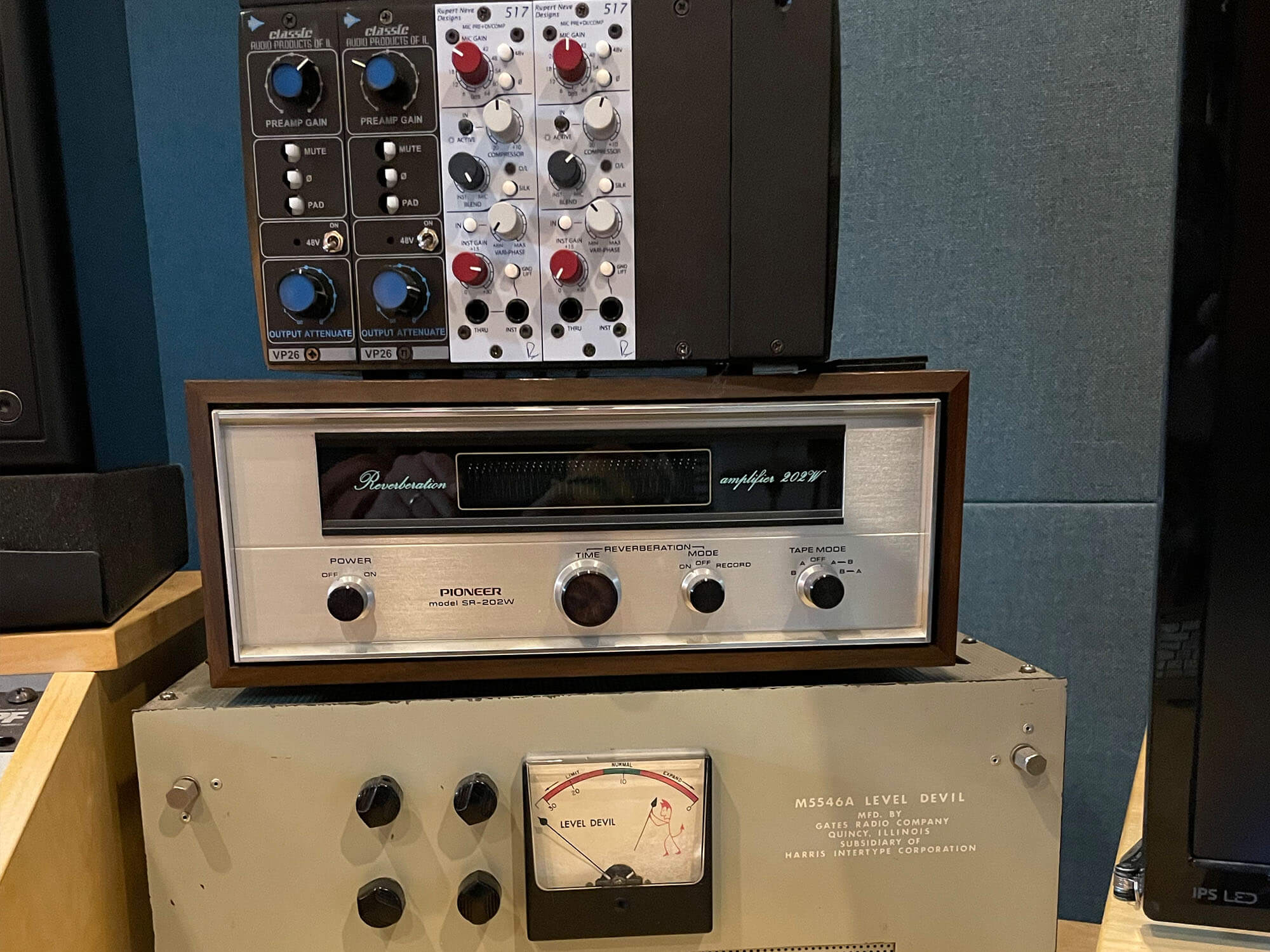 Learn how to mix and engineer yourself. As soon as you have that skill set you can do whatever you want and save a whole whack of time and money.

Other than that, I 100% endorse leaning on your community of musicians to make your albums better. I have never seen a situation where an album is better because someone did everything themselves. Find musicians that you love and trust and make them feel empowered and that their contributions are valued and the music that will come from that will be so much better than what any one person can do on their own. My own records wouldn’t be shit without all the wonderful musicians who helped bring them to life.

If you can avoid it, don’t cheap out. Every time I’ve cheaped out and not just got the thing I actually wanted or needed I have regretted it down the road. Mostly that’s due to me being a wildly impatient ADHD maniac but over time I have learned to chill and wait for what I actually need rather than making rushed decisions.

At Scaramouche by Joseph Shabason and Nicholas Krgovich is available to listen to on their Bandcamp.