Show Off Your Studio: Jon Maguire’s Newport studio is a playground for UK Top 40 artists

He started off with a few cheap mics and an interface, but after finding success as a writer and producer, his collection of 500 series modules and arcade machine is enviable to say the least 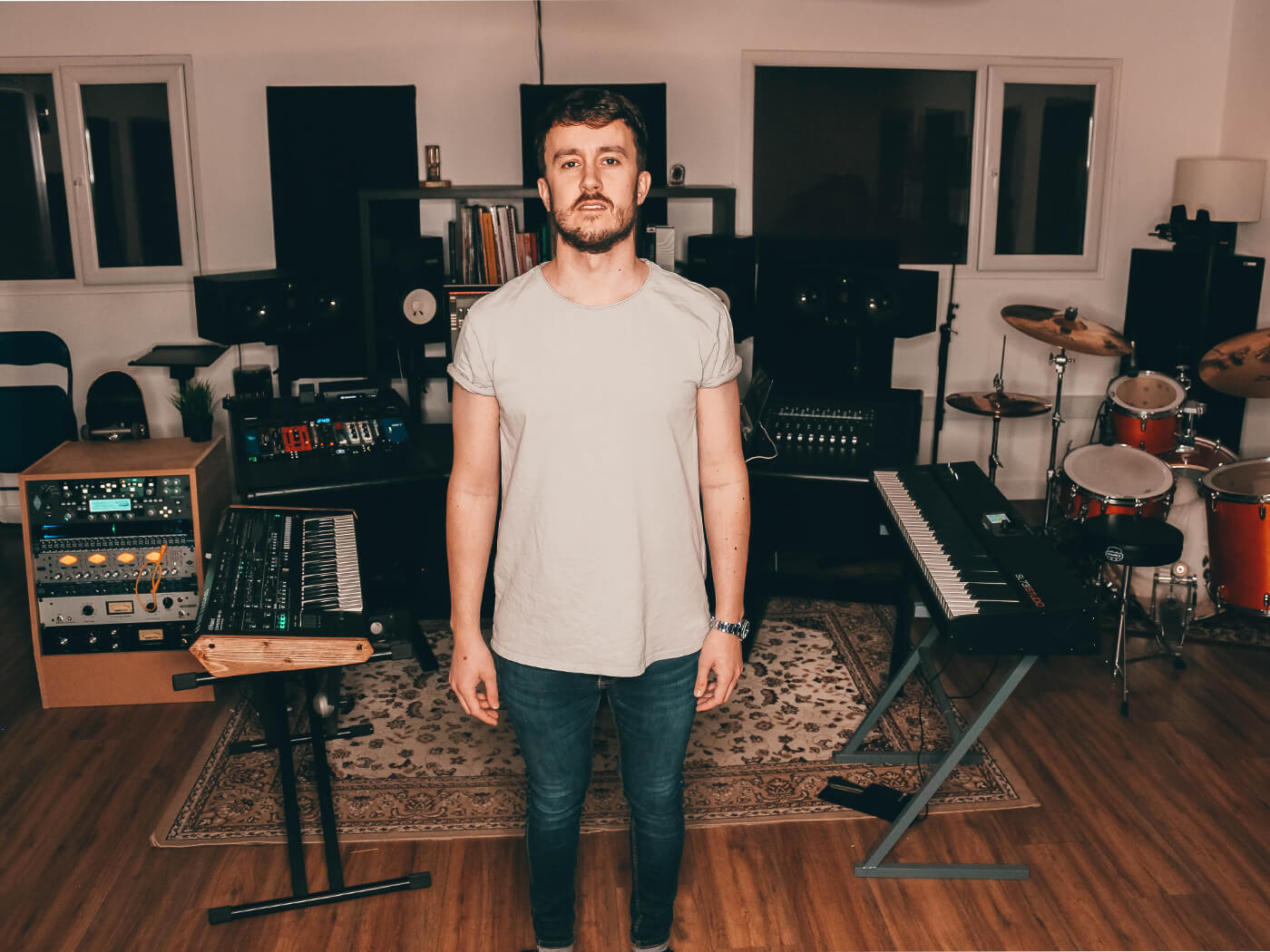 Jon Maguire’s music has been streamed four billion times, he’s sold 15 million records, and is credited on over 10 records that were in the UK Top 40. He hasn’t had the smoothest journey here, though. In his early-20s, he was recording bands and artists at £60 a session in Newport with “a cheap interface, a few dodgy mics and some hi-fi speakers”, he says. After meeting local pub artist Jon Lilygreen and forming a musical bond, they began recording together. A few months later, they received a freak phone call from the then-president of Warner Music Entertainment, leading to a major record deal for the duo.

Before they know it, Lilygreen & Maguire were working with high-profile UK songwriters and producers and playing 51 arena shows in 2012. The dream came to a halt in late 2012 when they were dropped. Maguire didn’t give up – he got in touch with his new contacts and by 2013 was writing and producing for Scouting For Girls. Since then, he’s worked with Calum Scott, Kodaline, Leona Lewis, Tiesto, Sam Feldt, Martin Garrix, One direction, Ella Henderson,  Liam Payne, James Bay and many more. And his studio is looking better than ever. 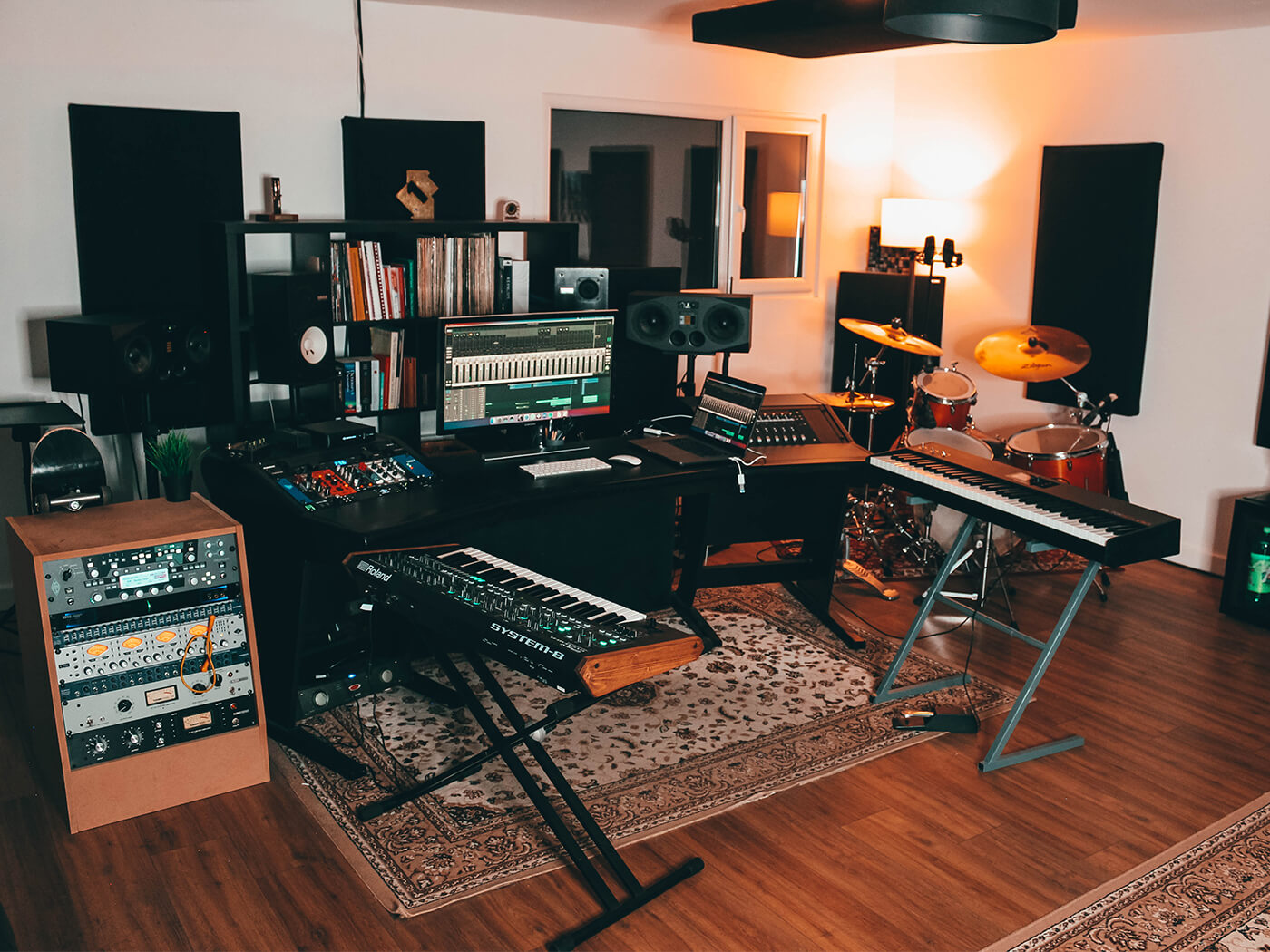 Tell us a bit about the studio, Jon.

The studio is based in Newport, South Wales. I was looking to buy a space for a few years and in 2017 I found a derelict industrial unit that was being used as a rehearsal space. The place was in a state of disrepair, so we gutted it and started the build from scratch.

The unit has 1,000 square feet of space across two floors. The idea was to build my dream studio that functioned around my workflow. I spend 99 per cent of my time in the control room, so I got rid of the partition wall upstairs and turned it into a spacious 6mx7m room. I also have two large south-facing windows that open. Rather than investing in purpose-built studio glass, I bought two sets of double glazed units for each window – one that opens inwards and one that opens outwards on each. It does the trick.

Downstairs is one metre smaller, in both width and length, and is currently rented to a friend on a long-term lease. However, in the build, we made sure that both floors have the connectivity to become the live/control room for one another. This has been so handy for larger projects. 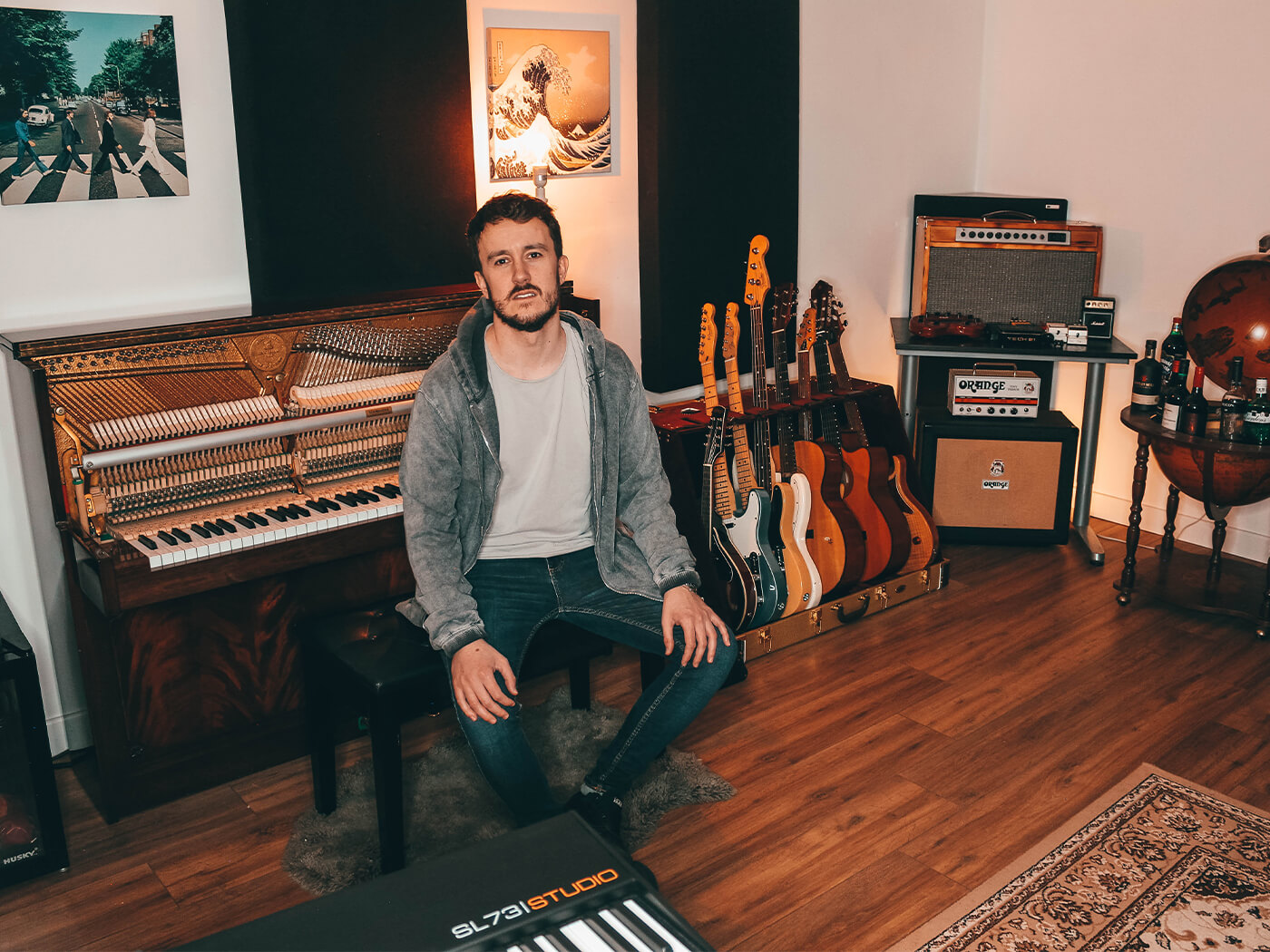 There are instruments everywhere in my studio. The perimeter of the room is home to a drum kit, a piano, guitars and a plethora of anything and everything that can make a sound or offer some kind of inspiration.

I like to keep things miked-up and plugged in as much as possible. It’s great being able to run to the kit and record a hi-hat loop or flip to a synth and record a pad as soon as the idea comes.

I quite often work at other studios, as lots of my work is based in London. I was recently in Abbey Road Studios tracking vocals for Calum Scott’s new record. 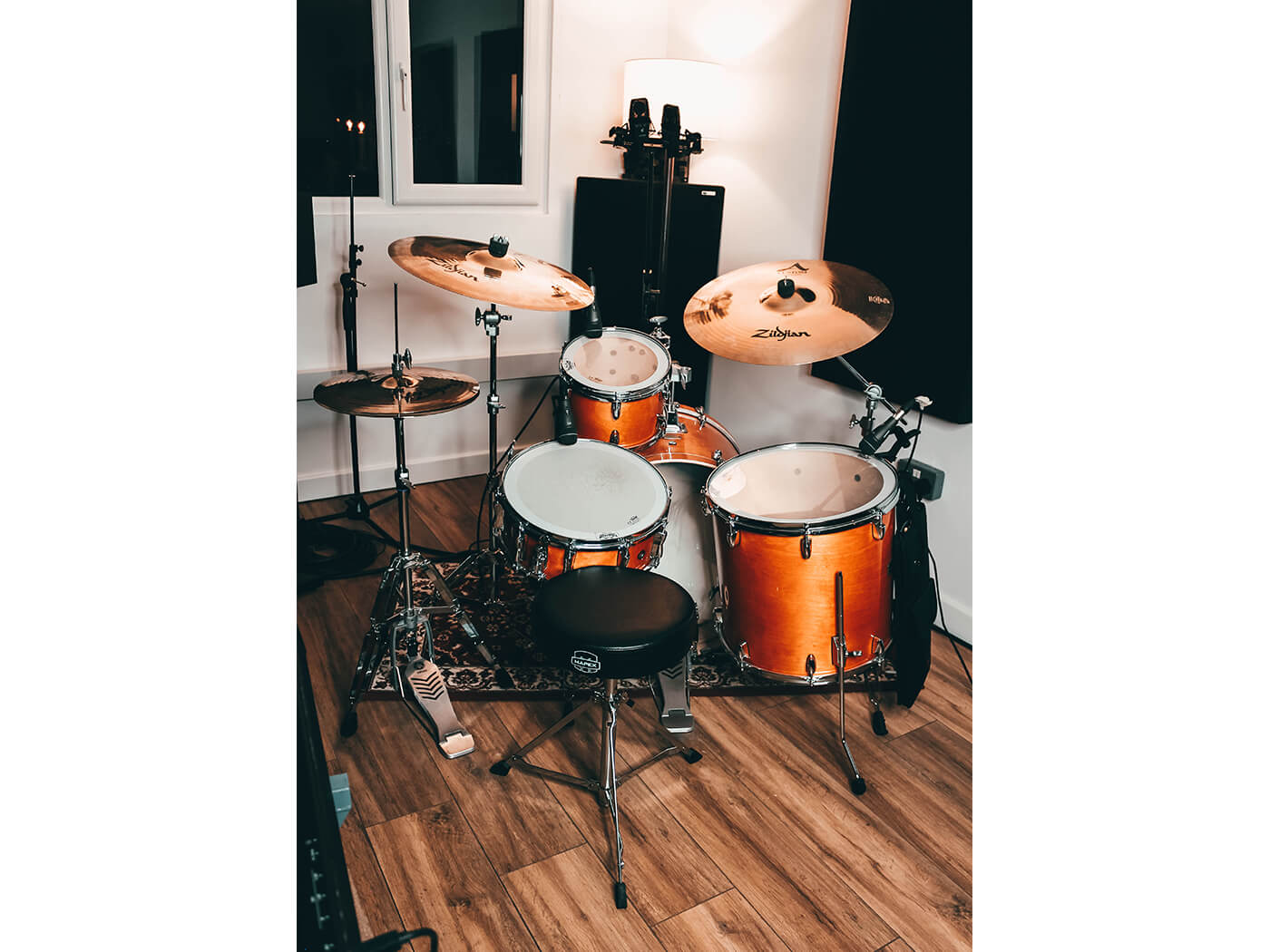 I use Logic Pro now but for many years my DAW of choice was Cakewalk Sonar. I moved to Logic because I was travelling more and wanted to use a DAW that was native to Apple. It has its dodgy moments, but on the whole, it’s pretty stable and I love the stock sounds and plug-ins.

That said, I work with so many amazing producers that use Pro Tools, FL Studio, Studio One and Ableton and all get incredible results. I don’t think a DAW defines you.

To me, the studio has to be fun. I was working in ASDA ten years ago and I didn’t get into music for it to be a monotonous job. You can do what you want at my studio and I want writers and artists to feel at home there. The way I’ve organised the studio naturally promotes conversation and creativity, as all seating focuses around the centrally placed coffee table. I also have a small library of books, a record collection, lots of instruments and quirky gear to generate inspiration. And, if that doesn’t work, there’s always the fully-loaded drinks globe.

Your story is a pretty wild rollercoaster. What did you learn about studio production while you were touring as a musician? How did you keep involved in the scene?

My journey began as a bedroom producer, so making the best of acoustically flawed rooms has always been something I’ve had to contend with. I’d often apply things I used to do in my bedroom to hotel rooms, especially when we were on the road. We’d put microphones in wardrobes with clothes and towels for acoustic treatment, take a small MIDI keyboard and record on headphones. I’ve made some great records in the most bizarre of rooms.

You’ve worked with some big names on some big records. How do you keep artists at ease and in the zone?

The songwriting process is personal, so making the artist feel at ease is paramount. My job is part-record producer and part-shrink. There are things that are said in my studio that will never be repeated and I genuinely feel that the openness and honesty we often have in sessions is reflected in the final product. And, if more easing is required, there’s always a retro two-player game on the arcade machine. 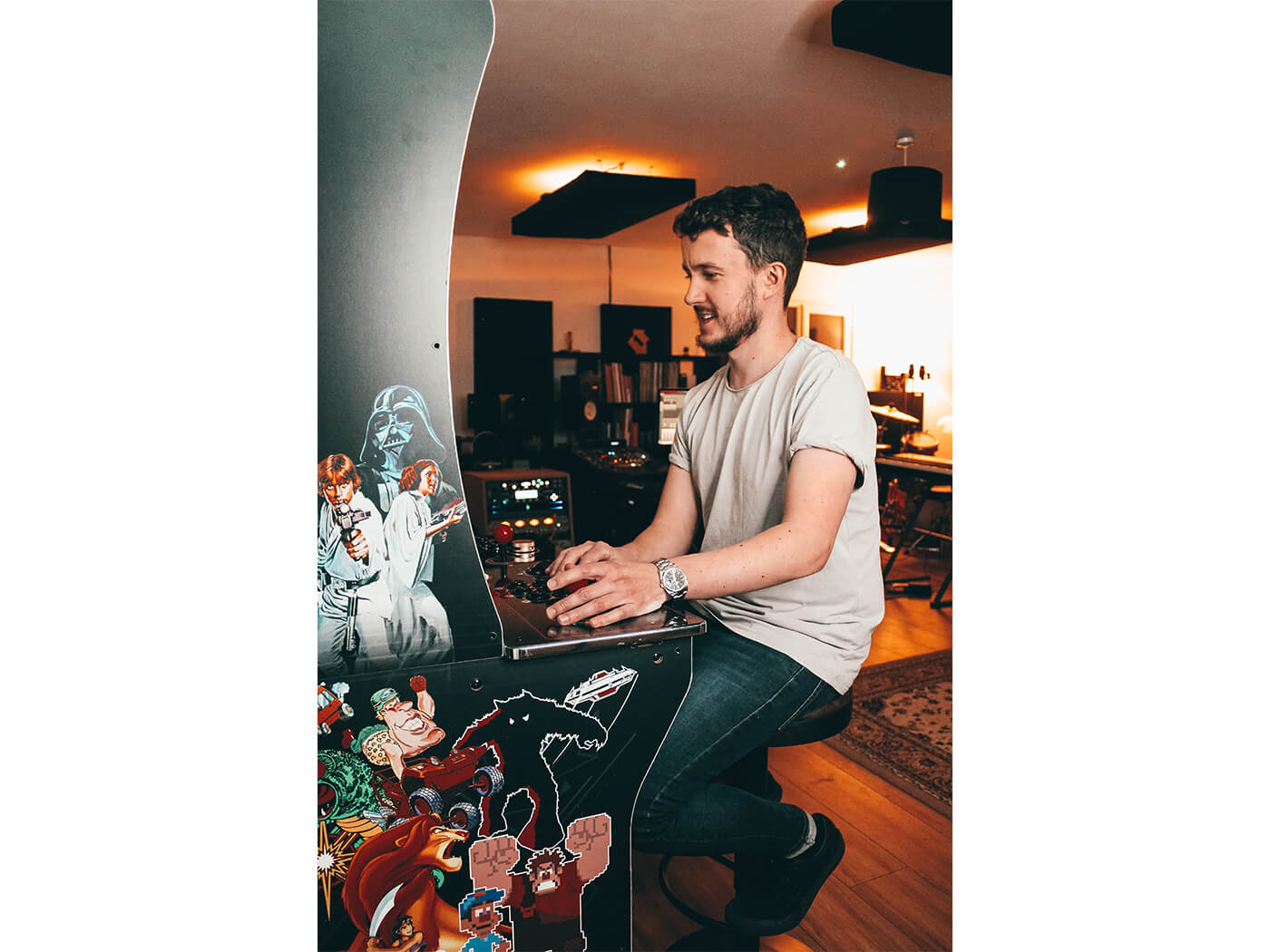 The Roger Mayer 456HD. It’s a tape simulator and it’s incredible on anything that’s not sitting right or lacking in vibe. I’ve currently got it on an effects return and I’m running everything through it, from synths and pianos to vocals. It was recommended to me by fellow Welsh producer Romesh Dodangoda and I absolutely love it. 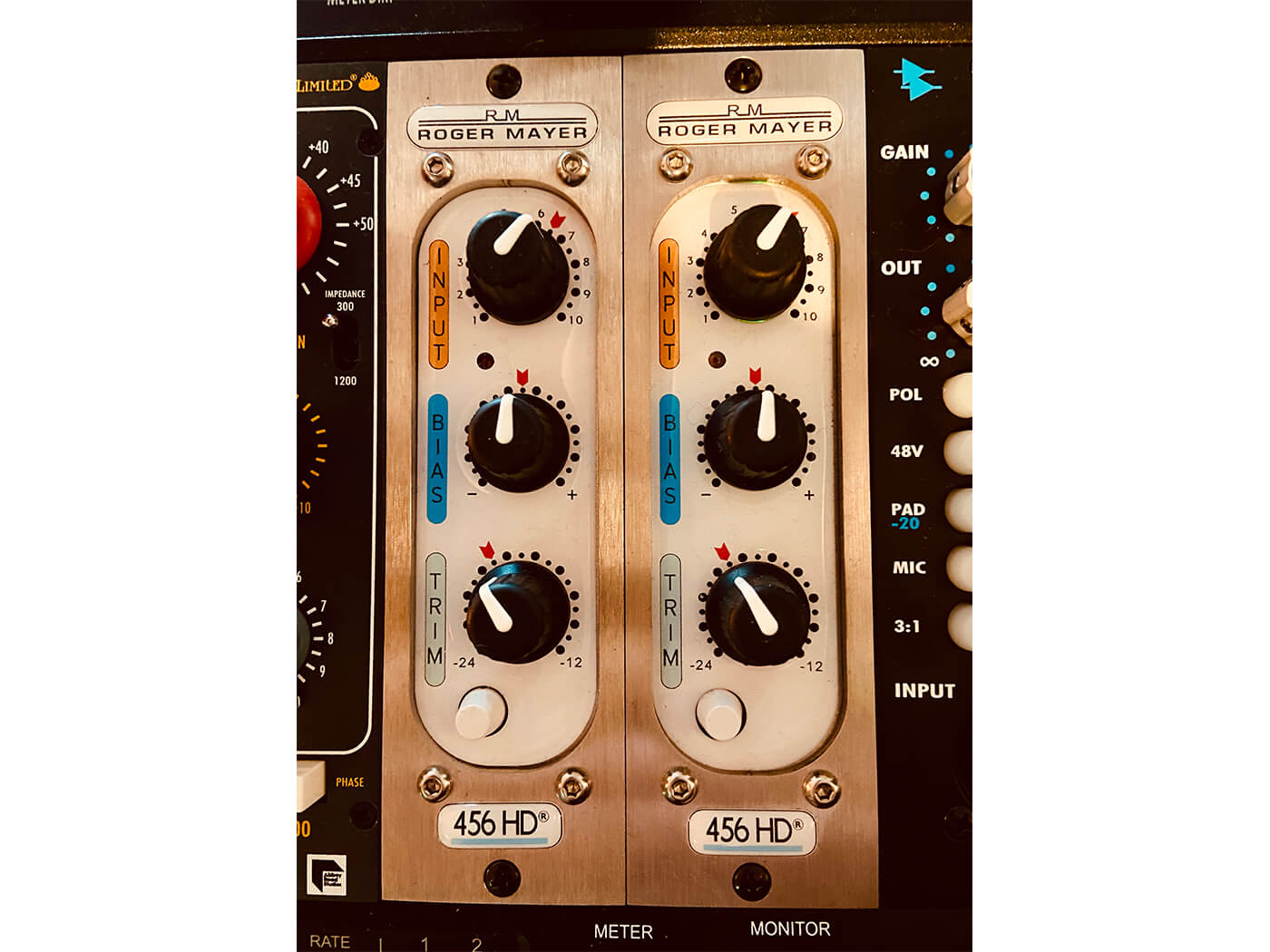 I’m a song guy at heart so I’d take my brother’s old Fostex 4-track. I recorded my first ever song on it and it taught me so much about recording. It’s a one-stop shop and I could still make a full record on it – albeit, a loose not so tuneful one. It lives in the hallway of my studio and we tried it out the other day – it still works. 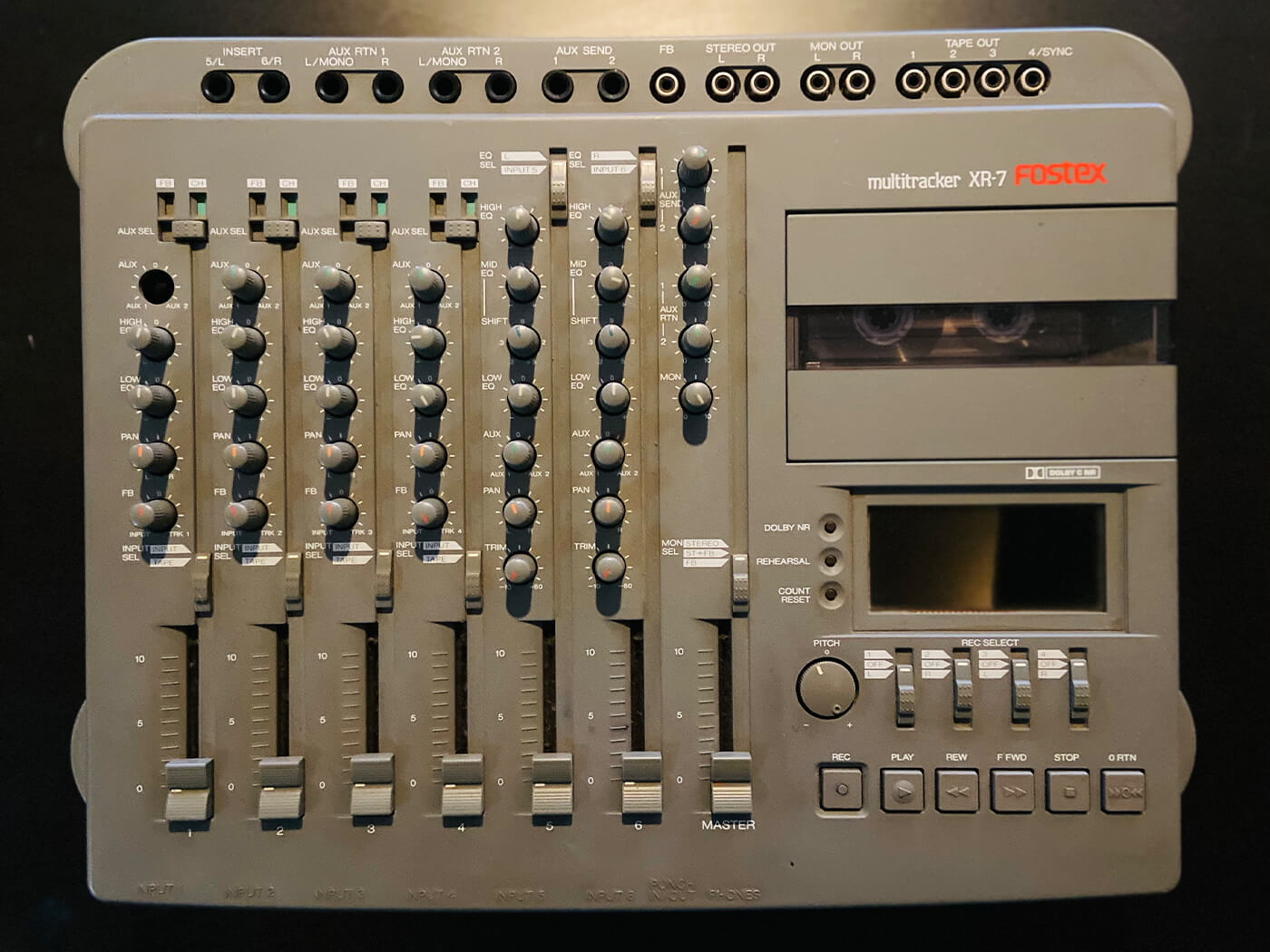 What hardware or effect can be heard the most on your recent works?

I regularly work with mixer Charlie Holmes who once suggested using the SoundToys Devil Loc in parallel to remedy a thin vocal. It’s since become a staple trick that I apply to anything that needs filling out. I use it with Darkness setting at around two or three. This cuts the high frequencies and gives the source some warm harmonics in low and mid ranges.

My 500 series rack. It’s absolutely been worth it. I’ve got outboard from API, Chandler and Neve all within a 3U space in my rack. What more could you want? 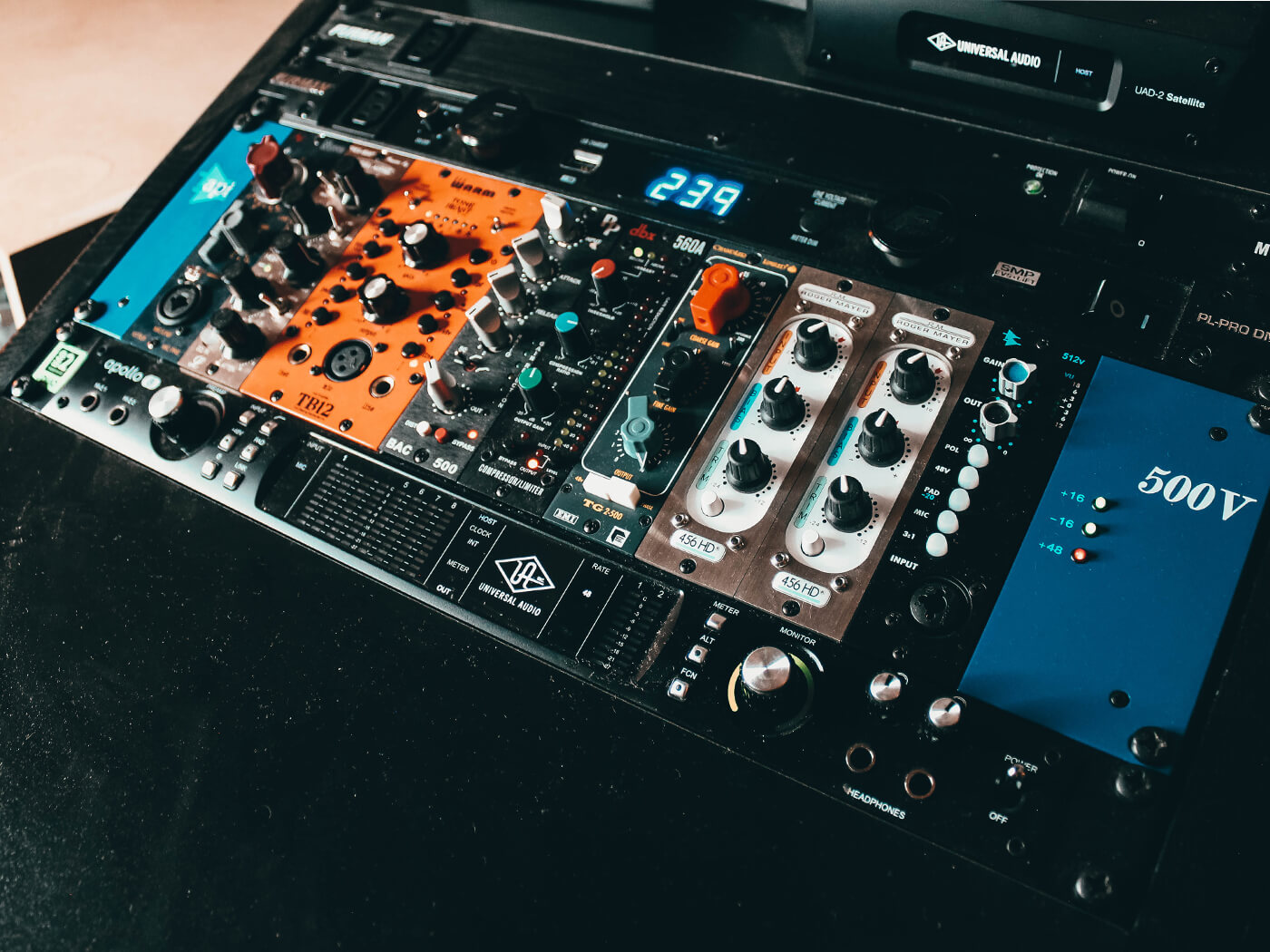 The studio is asymmetrical, it has pretty high ceilings and it’s full of stuff. This is always a good start. In addition, there are 20 or so acoustic panels that are dotted around the room. To the rear of the monitors, I have an IKEA Callax full of books and records that work as a sort of diffuser. I borrowed this idea from Whispering Bob Harris’ studio. He had no acoustic treatment, just a room with floor to ceiling racks of CDs on every wall and the acoustics were incredible. I couldn’t get over how flat and dead the room sounded.

I’m going to upgrade my monitors soon. It’s such a big space and I feel a tasty pair of ATC’s or Barefoots would look and sound great. 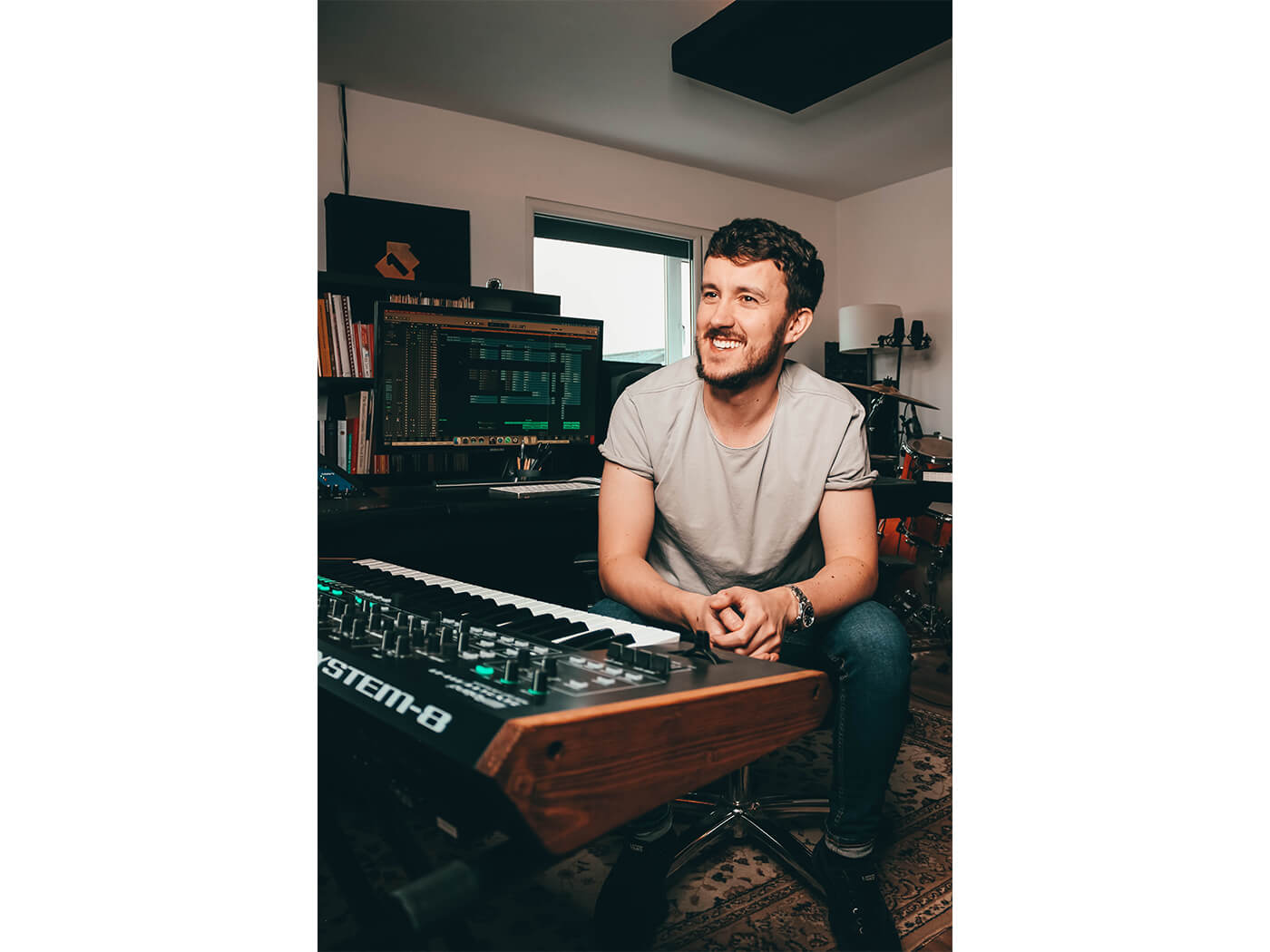 I’d love a centrepiece console. Maybe a vintage SSL or Neve desk. I feel music-making becomes so visual with computers – it would be a completely different process. Also, it would look cool as hell.

There are no rules and you never know where a hit is going to come from. Keep practising and keep churning out those ideas. You’ve got this!

The sound of your room is more important than the price of your equipment. An iPhone microphone in a great room sounds better than a Neumann into a Neve in a badly treated room. Do some research into treating your room online – there are so many practical and inexpensive workarounds.