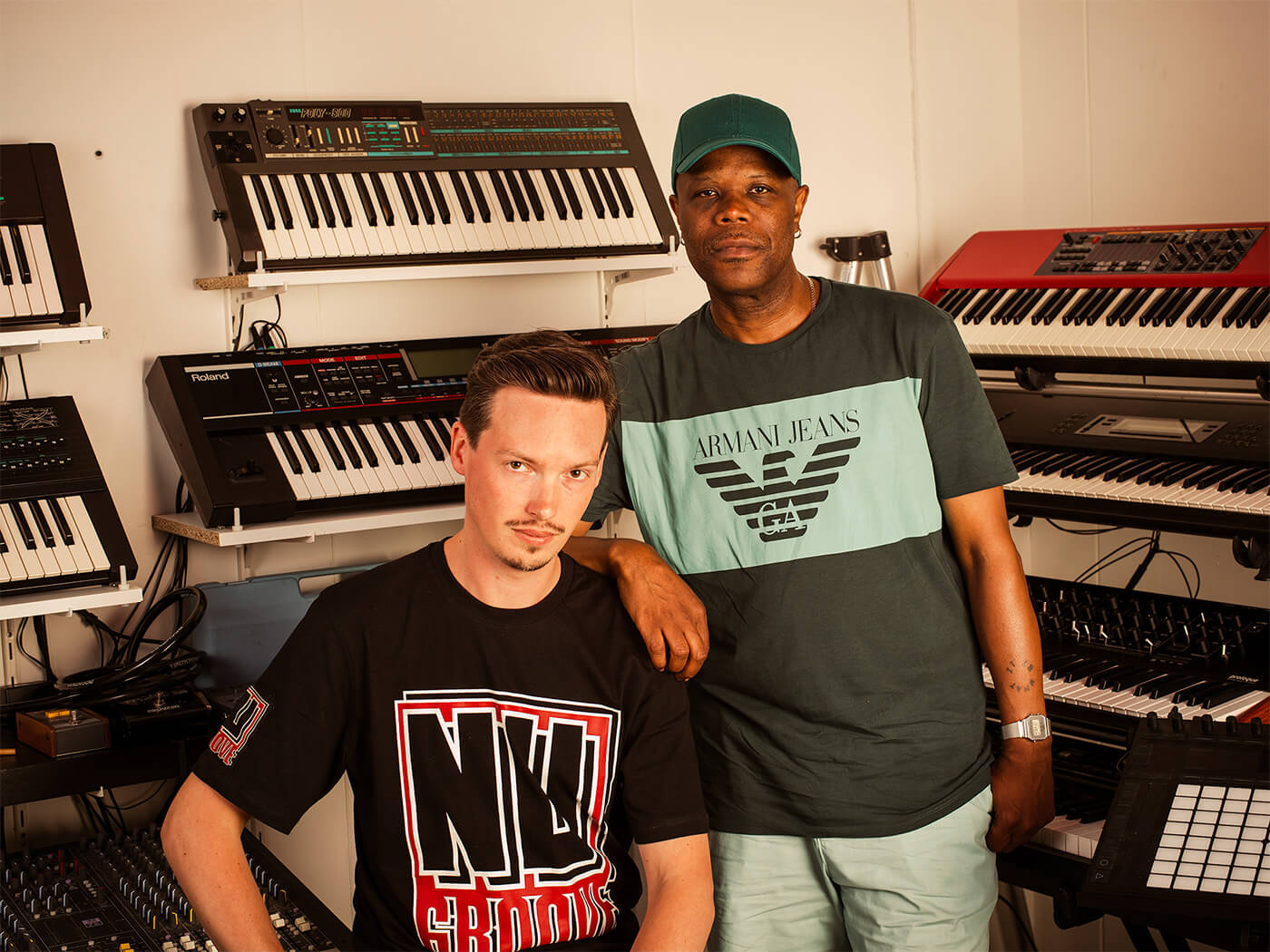 Show Off Your Studio: Jamie 3:26 and Danou P jam out to make classic house music

Jamie and Danou talk Chicago, working together in Rotterdam and why buying gear doesn’t always result in success

Jamie 3:26 is an instantly recognisable name in classic Chicago house, with a style heavily influenced by authentic jazz, funk and soul. Danou P is a producer, musician and friend of Jamie who’s worked in various bands in Rotterdam, Netherlands. Together, they’ve conjured up a deeply danceable EP on Dan Shake’s label, called What It Is. The release really is what it is – a no-frills groove fest from start to finish that lets the music do the talking and let its listeners dance.

Speaking from Danou’s studio in Rotterdam, the two tell us about their roles when collaborating, Jamie’s deep Chicago roots, and why buying expensive gear shouldn’t be thought of as an instant route to success.

Danou: Jamie will take place behind the computer while I get myself situated behind the keys and we start jamming and recording. Sometimes, I come up with something that we use to build the track around. Other times, Jamie has a melody or bass line in his head that I will try to figure out how to play. At some point, I leave Jamie to work his magic on one of the drum machines.

Jamie: What’s rare and what makes our connection special, is that there’s a creative synergy between us and we get each other well. Suggestions can just start flowing out. 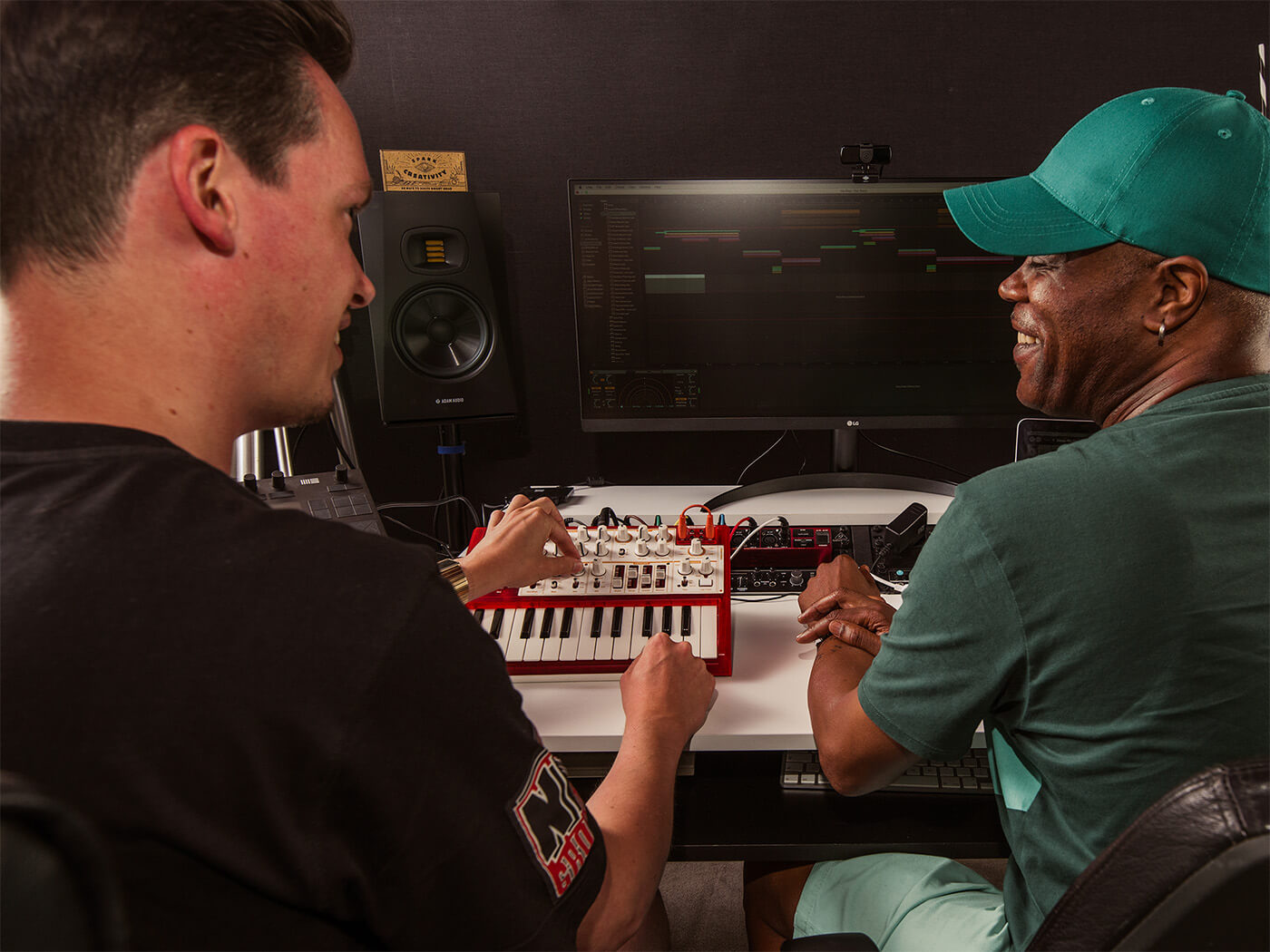 Tell us a bit about the studio you work in.

Danou: The studio is in the centre of Rotterdam. It used to be a rehearsal space for bands so the whole thing was already built as a ‘box in a box.’ It has three doors to go through so it’s soundproof. Since it’s in a residential area, this is great – we can blast music whenever we want and none of the neighbours can hear us.

I moved into the studio at the end of 2020. Jamie joined us in September 2021. Eventually, the whole block will be torn down, so we will have to find another space. But it looks like we have a couple of years left before that happens. 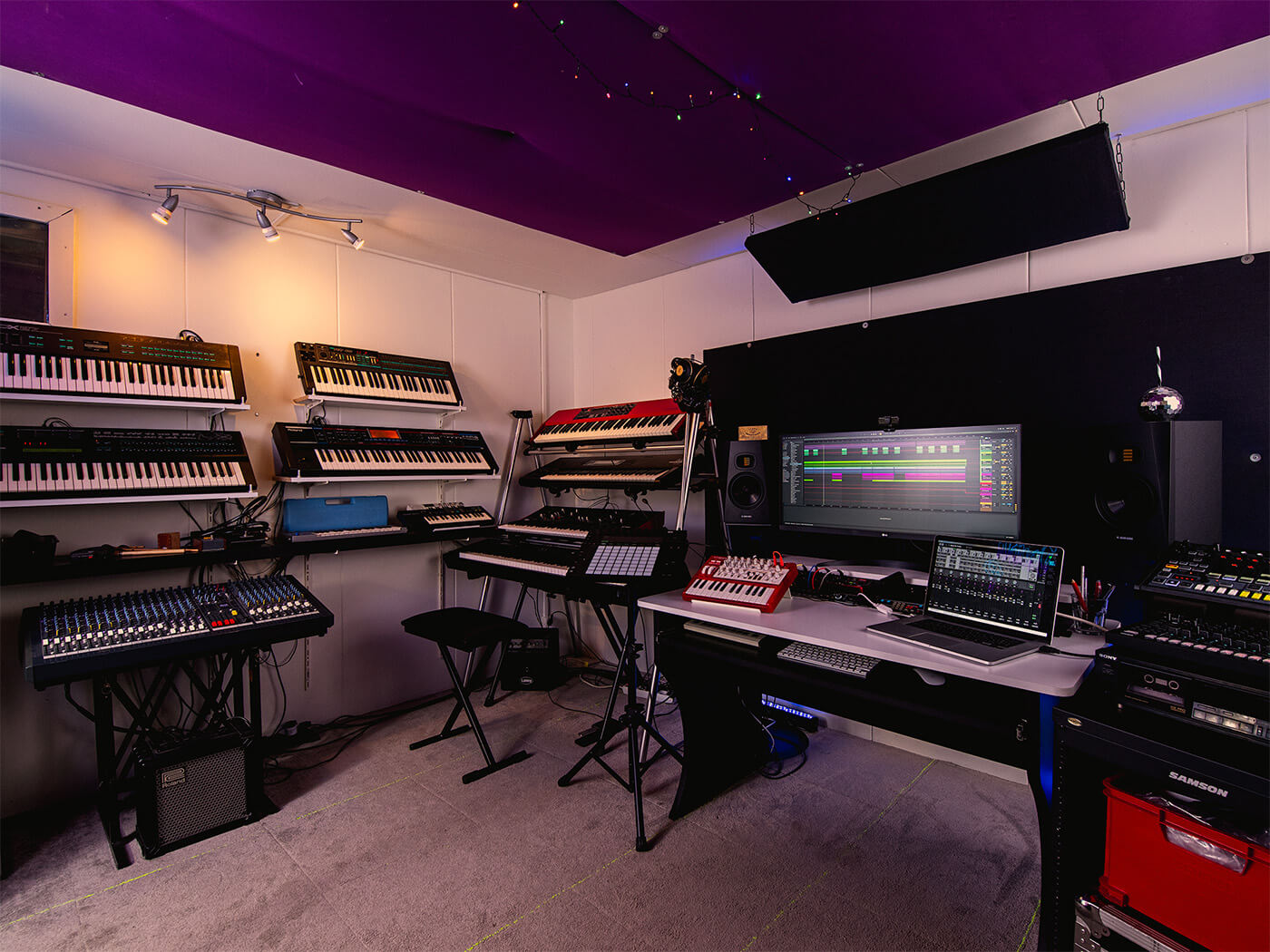 Jamie: The best part of our studio space is the acoustics. It really helped me understand mixing and sound much better. You can have the most expensive monitors, but if your room isn’t at least decently treated, it will be noticeable in your mix.

Danou: We use the studio for a lot of things. Mixing, recording and teaching. When it comes to making music it’s a nice place to mix in, the sound is great.

Recording vocals or percussion instruments also works great because the room is almost dead. As long as everyone else in the room is quiet, we have no need for a separate vocal booth. 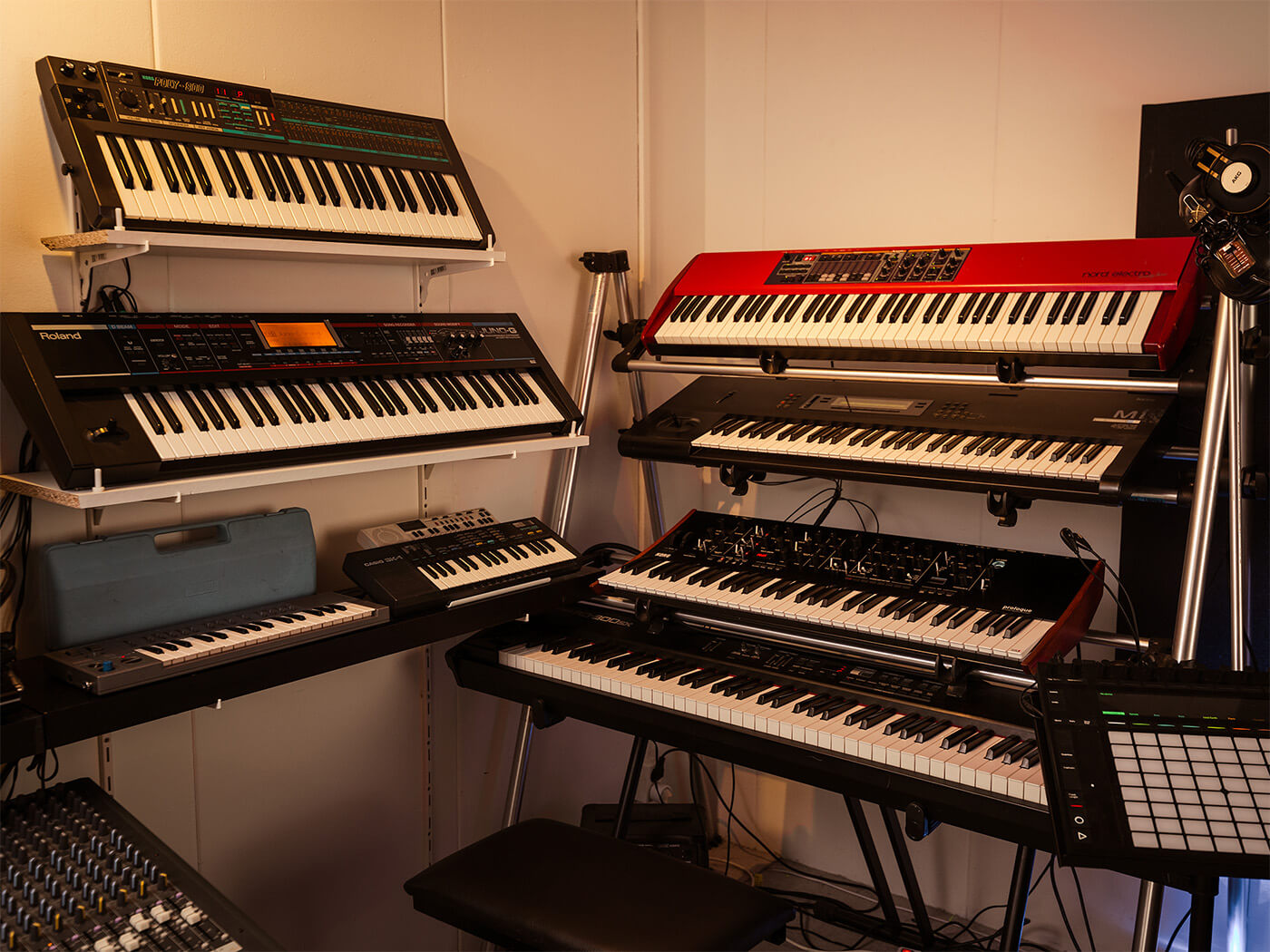 Danou: When we moved in, the whole room was dark and grey. So we knew that at least we wanted to go for a brighter room, since we had no daylight coming in. After painting everything white, the big purple acoustic panel on the ceiling really stood out. It felt kind of 80’s or 90’s so we decided to keep that vibe going since a lot of the hardware comes from the same era.

Danou: I have been using Ableton Live for about eleven years now. I used to work with Logic Pro, but when I started playing in bands that used Ableton Live on stage it was only logical for me to make the transition.

Jamie: I was a hardcore Reason head. I still like the sounds that come out of it, with some of the modules bundled in. I didn’t really start using Ableton Live heavy until the mid 2000s. I just rewire Reason rack into Ableton to do my drum programming. If you find something that works, stick with it. 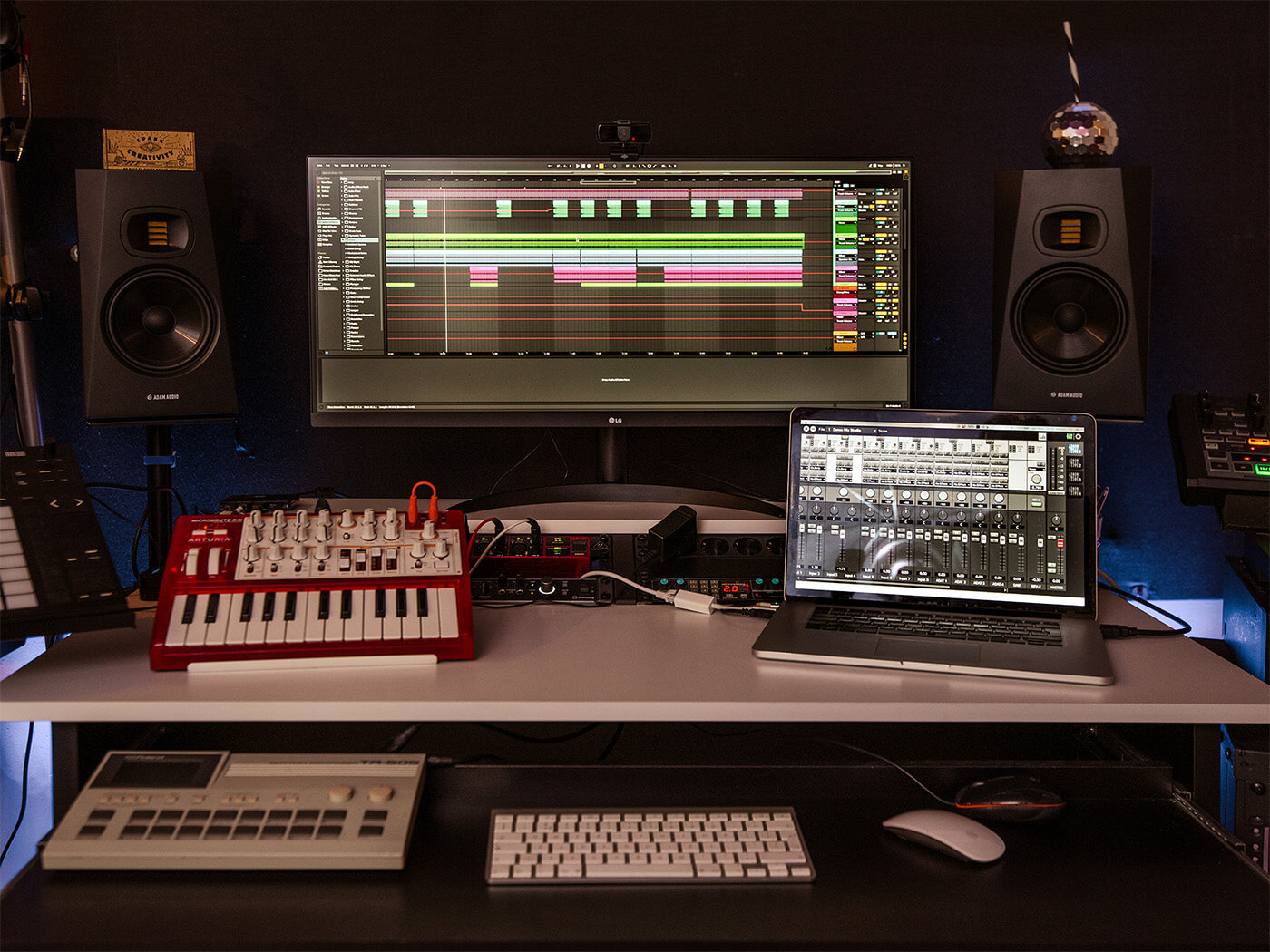 Prior to getting heavier into Ableton Live, I did all of my edits and editing in SoundForge 7.0. I’ve been using that software for about 20 years now. I still go back to it to knock out quick edits.

Danou: I love the Korg Prologue 16. It’s such a nice synth with so many options but the way it’s designed doesn’t feel crippling. You can easily get sounds that work, and although it’s not great for everything, it’s one of my favourites. 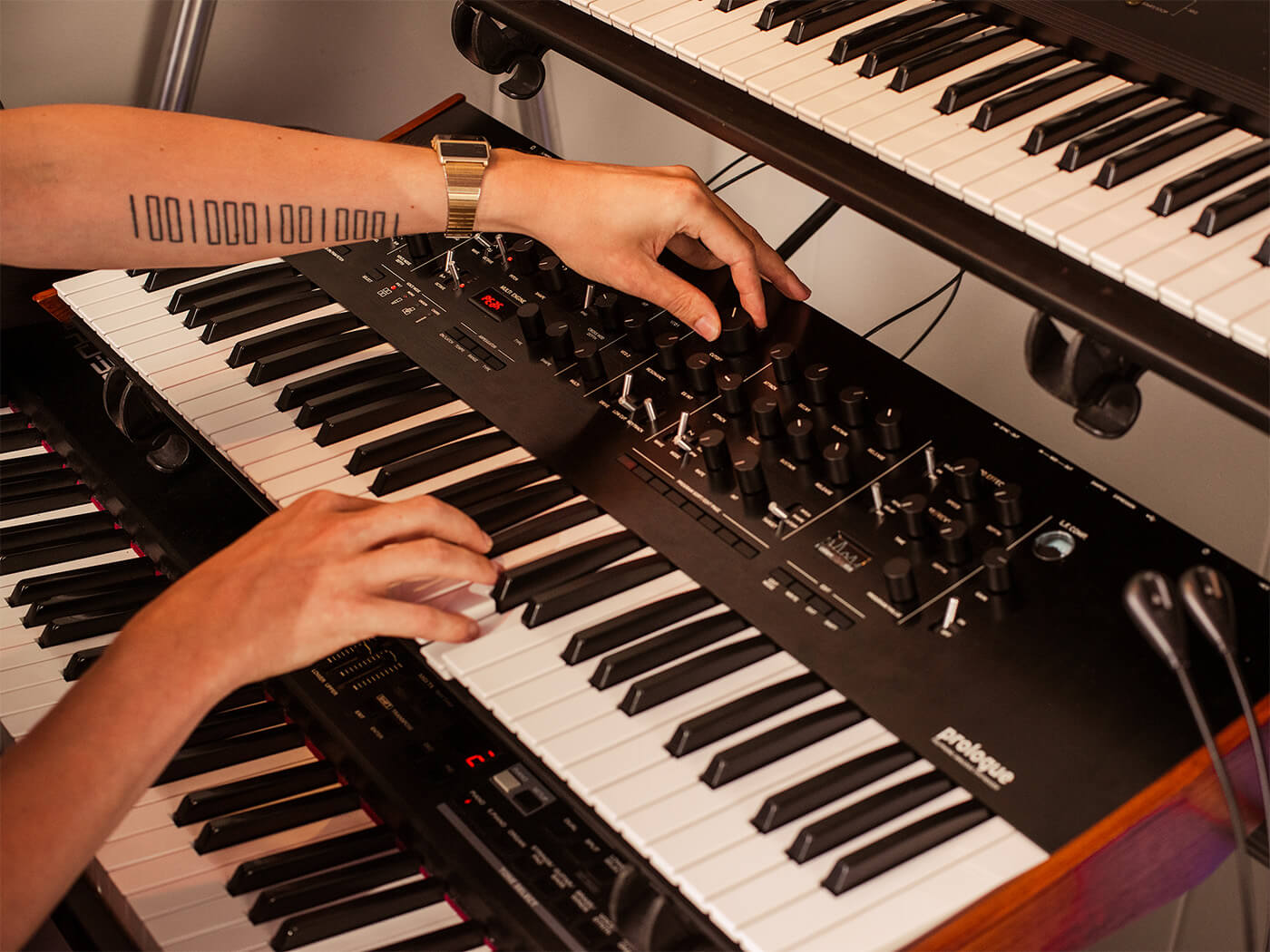 What synth or effect can be heard the most on What It Is?

Danou: This EP sounds organic, but a lot of tracks were made in the box. Most of the sounds actually come from plug-ins like the Arturia V Collection. The organs and electric pianos all come from that collection.

Jamie: I am a sucker for the Rhodes and Arp String Ensemble sounds. When I discovered them in the Arturia collection, we used the hell out of them, along with the Moog Minimoog as well. Danou had to tell me ‘no more Strings, bro!’ [sic] 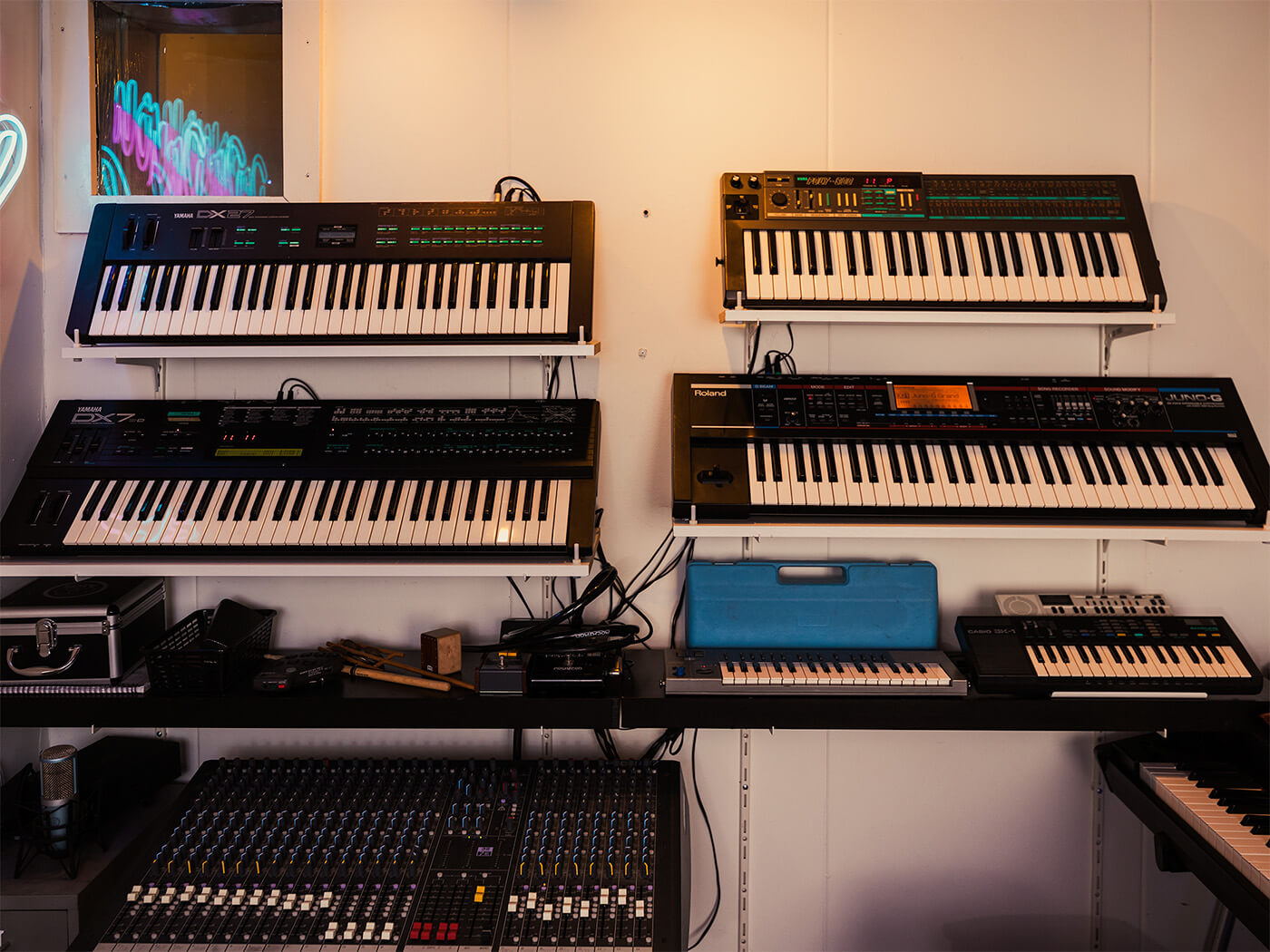 Jamie, you’ve got a classic Chicago house sound that reflects your roots in the city. How has the city and producers in the Chicago house scene influenced you?

Jamie: I came up in this culture before the world even knew what we were doing back home. I was beat down by the gods in this game and heavy in the party scene. It was a house culture, even before the electronic side of the game came into play.

I spent time around some legendary pioneers in the game and just soaked up all I could in regards to production. Being a ‘trackhead,’ I enjoyed the beat tracks and studied the programming regarding drums. I was taught how to do it right, even if no one sat me down.

I do my best to be a positive representative of the city and culture I come from: Chicago and house music. I know that influence comes out in my music and that’s a heritage I’m proud to keep alive. 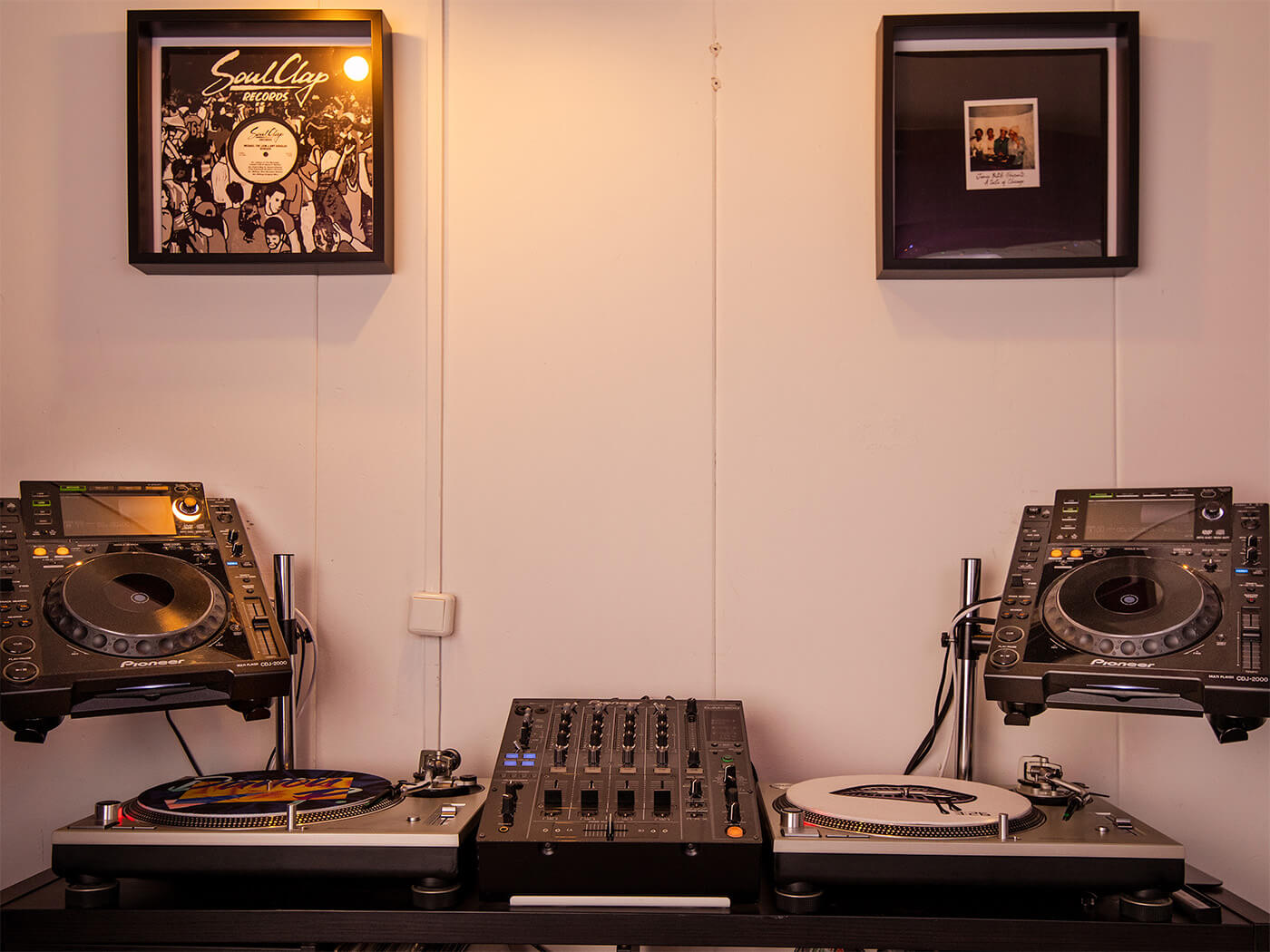 Danou: In 2021 I got a grant which I could partially use for studio upgrades. With the money I bought the Adam T7V Monitor Speakers, Steinberg audio interface and the ADAT expander. I’m happy with the monitor speakers, they sound amazing for the price range they are in.

Jamie: I would have to add getting a DJ setup in the studio. It really helps to be able to rock out and play at a loud volume and not have any complaints.

What is next on your shopping list studio-wise and why? We see you’ve got the Juno-G – any interest in the new Juno-X?

Danou: The Juno-G is not going anywhere. I’ve seen the Roland Juno-X and I think it is pretty remarkable how close it sounds to an original Juno. But the Juno-G is not an [original] Juno at all, it’s full of great sounds and is basically a workstation.

Jamie: I would like to get a new rotary mixer for the DJ set and another drum machine. Perhaps the R9.

Danou: My dream synth is the Korg Mono/Poly. It sounds amazing, and I don’t think there is a synth out there that you can compare it with from the same era. It’s good to dream. I mean, I could get a Behringer knockoff, but that’s just not the same, is it?

Jamie: I would have to mention a Roland TR-808, but right now, the Behringer RD-8 works. 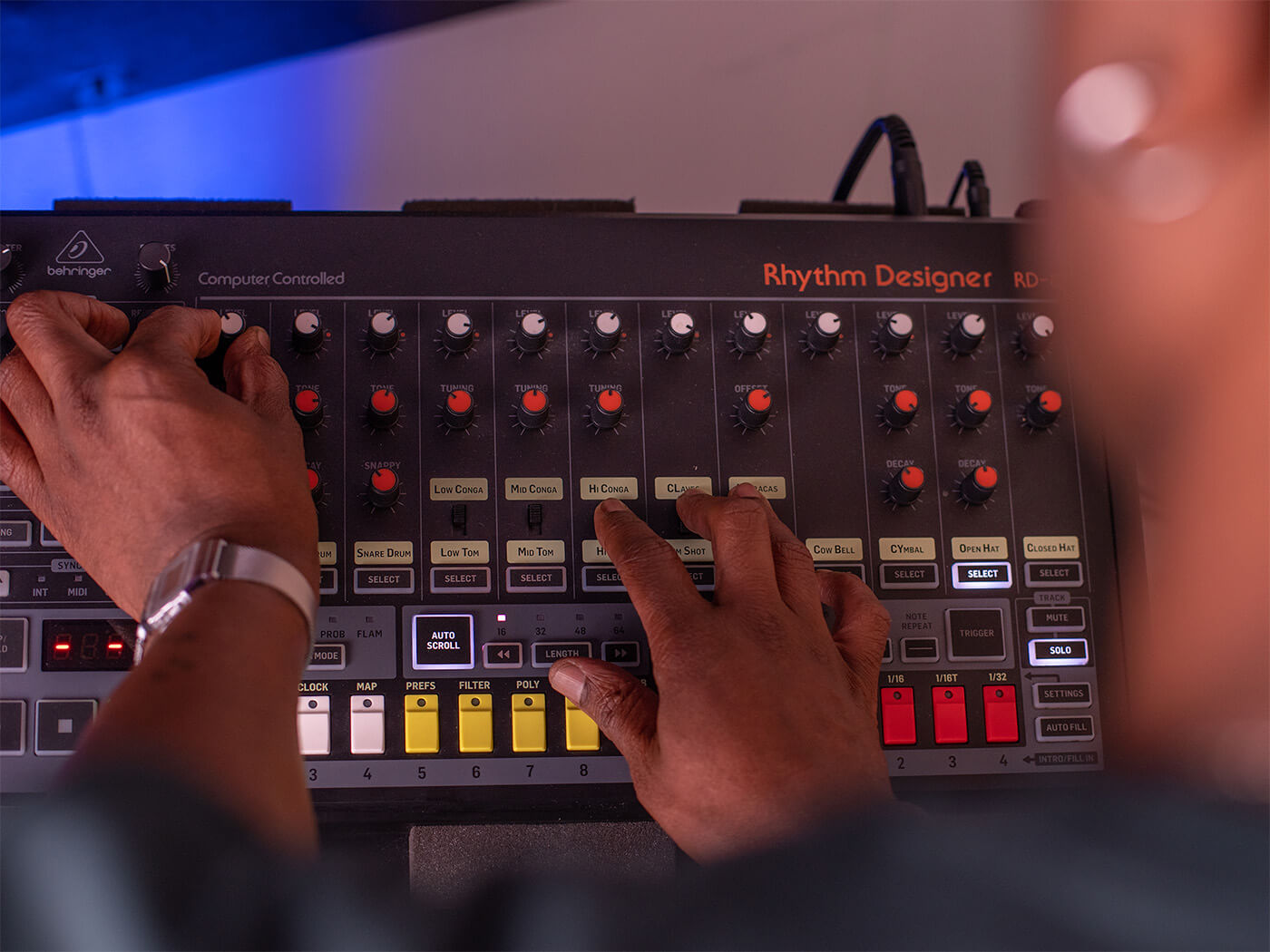 Danou: The most solid advice I can give is: take care of your ears! You need them for everything you do.

Jamie: I would advise people to not get caught in the buying equipment game and not creating. You can’t operate under the mindset of when you get a certain piece of gear, then you’ll be good. You know how much gear is out there and comes out? Just master one unit or DAW and then the rest will come to you. Just create.

I will also add, it’s cool to come back to revisit an idea later with fresh ears. You can’t force creativity.

Danou: Don’t get lost in the details. Make sure you get the basics first. Invest in two decent monitor speakers and make sure the room acoustics work for you. You can get great results when you have these two things down.

Most people who start out have more time than money, so getting your first gear second-hand is a great way to save costs.

Check out What It Is on Bandcamp and other music streaming services.