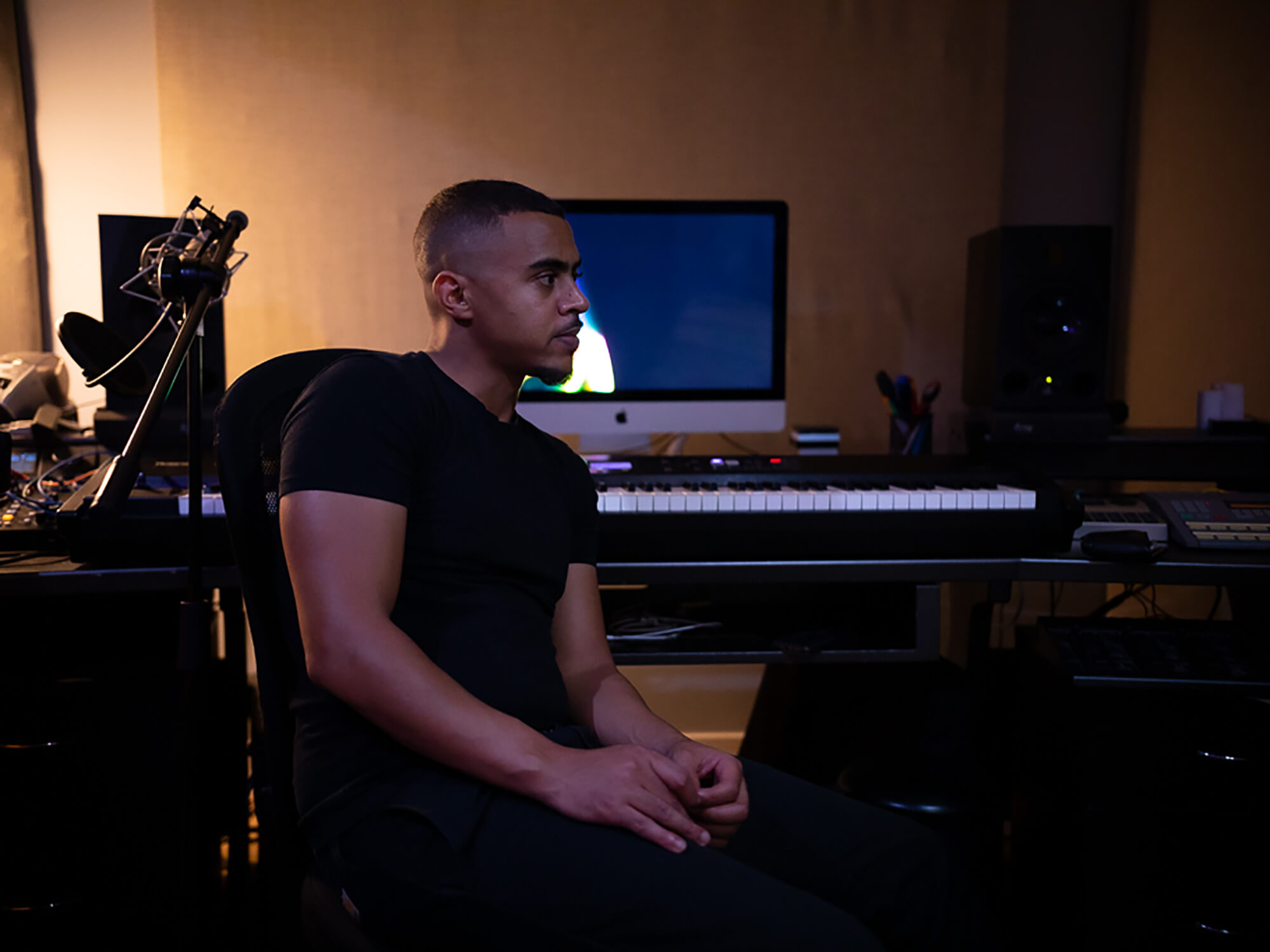 Show Off Your Studio: How Swindle made New World during a musical retreat in Real World Studios

The prolific UK producer brings us into his home studio to tell us about the gear on his new album and how it was the product of a musical retreat he organised at Real World Studios.

Swindle is an all-rounder – producer, beatmaker, musician, visionary, and tech-lover. As lockdown eased for the first time in the UK during summer 2020, the prolific Brit was ready to flex his creative muscles. Armed with a collection of beats he’d made at home, he called an emergency meeting at Real World Studios, Bath, inviting some of his favourite artists to host what was essentially an extensive jam session. The result is a free-flowing body of work, New World, that – true to Swindle’s nature – doesn’t hinge on one style or genre, and brings out the best of his talented colleagues.

Loyle Carner, Poppy Adujha, Akala, Daley and Greentea Peng are some of the revered artists on New World. To learn more about its creation and Swindle’s penchant for collaboration, we head to his home studio in Kent, where he reveals the story behind the album, and why he sees his record collection as an encyclopedia.

Hey Swindle. What was the concept for New World?

It was an accidental album. We were locked down from early 2020, and nobody was doing [recording] sessions, and I was ringing artists that I have relationships with to try and get inspired, but I was learning that they were all in the same creative dead space I was in. So I called this emergency meeting at Real World Studios, and we went there on the first day of the easing of lockdown in June 2020. The idea was that we’d reconnect at this musical retreat.

The music on New World is what we created that week. The whole thing came together in a week, and it was all done in person. It’s the fastest I’ve ever turned around a project, and it was the most organic thing I’ve ever been involved in.

How do you decide who to reach out to when collaborating?

The only person I hadn’t worked with before on this album was Loyle Carner. The idea came while I was on a call with Joel Culpepper, and we said, “We should just get away. It’ll be like a holiday”. I try to keep it as organic as possible, you know. I don’t want my albums to sound like A&R meetings.

The exciting thing about collaborating is you make music that’s only possible under those circumstances and with that group of people. And the further you stretch that pool of collaborators, the more interesting the music, I find. Having Akala and Knucks in the same room or Poppy Adujha and Daley is not a situation that would normally come up. That music becomes this one-on-one experience. That’s become addictive.

Tell us a bit about your studio at home.

This is my life’s work [laughs]. My Roland JP-8000 was the first proper hardware synth, which goes back some years. Since then, I’ve just been building slowly, getting stuff from charity shops and places like Facebook Marketplace. I’ve got a Yamaha DX7S that was in a cash converter for £100. I’m on Reverb; I’m on Facebook Marketplace – especially during lockdown.

I just take things to try them for a bit. I’ll see an old Casio keyboard, buy it and then sell it when I’m bored of it. It’s a slow build but, with gear, it’s always better if I grow out or something to get something new.

You’ve got some nice guitars back there, too…

Yeah, I’ve had them for a long time. There’s a 12-string Fender Stratocaster – there are some things that all studios should have, and a Fender Strat is a staple. Along with the Neve 1073 and the 1176 compressor. When I go to a studio, I need there to be a Neumann U87. It’s like bread and butter, I guess.

When you incorporate gear like that into your production, it’s like: “ah, this sounds like a record!”. It’s surprising. There are a million reverbs, but there’s something special about using the same reverb that was used on 100 records. As soon as you hear it, it sounds right. That’s why I love the E-Mu Proteus 2000. The minute you play it, you’re like, “this is R&B!” It’s the same with the Korg Triton, too.

Do you have a favourite piece of gear at the music?

For me, it’s always like the newest thing. I’ve just got this Hohner Pianet, like a Wurlitzer but smaller. The Behringer Poly D has impressed me as well. It’s great, but it definitely needs to be preamped.

What gear at Real World Studios was essential to New World?

What I like most about Real World, in general, is the sound, and I think that running everything through the SSL desk gets you such clean stems. You just get that, again, that same ‘record’ sound. You dial it in, and it’s there, so we had sub-mixes on the desk, tracking everything then patching it into the sound card and my computer.

So what about the software you’re using? Do you have a preferred DAW?

Logic Pro. It’s just what I’ve known since I started making music. I’ve used most things over the years. I started on this programme called Orchestra Plus, and I don’t even know if it exists anymore. I used Cubase a lot and then Reason when it was new, and then I switched to Logic during the big Cubase Exodus in 2007. I got into Logic, and I just know it inside out now.

You’ve said before that sampling has played a big role in your production as you find these classic records that influence your music tastes. Are you still actively looking through older stuff for inspiration?

I see my record collection as an encyclopaedia. And every time I’m, you know, not feeling inspired or I need to reference something, I go back. And I wonder whether we’ve technically surpassed the [sonic] possibilities of the past. But then I don’t know if we’ve been able to even match the musicality of what’s happened before. There isn’t another Songs in the Key of Life still.

Do you think you’re actively trying to make a record that will also stand the test of time?

I think about it somewhat. I just follow being honest about music and writing music that I love. And keeping hold of that integrity is important. And as a result of that, I hope that I’m putting out music that I’ll always be able to stand next to and leave a legacy that will speak for itself.

What advice do you have for aspiring producers wanting to make an album?

Keep things simple. You can present a complex idea in a simple way. Also, keep information close by. Always try and be learning something, and you will never have a block. I have a jazz theory book and a music production handbook close by. You might be surprised, but people use the same techniques because they work.

What about advice for building a studio?

With the building, isolation is key. There was a lot of research to build this room – this room within a room. I didn’t want to disturb anyone, and that took some work.

Gear-wise, start with the basics and build out from there. There’s no point just throwing in everything. Whatever is the centre of your production technique – it might be a mixer or your computer – whatever your workflow is, just work slowly on building that out and make it as fluid as possible.